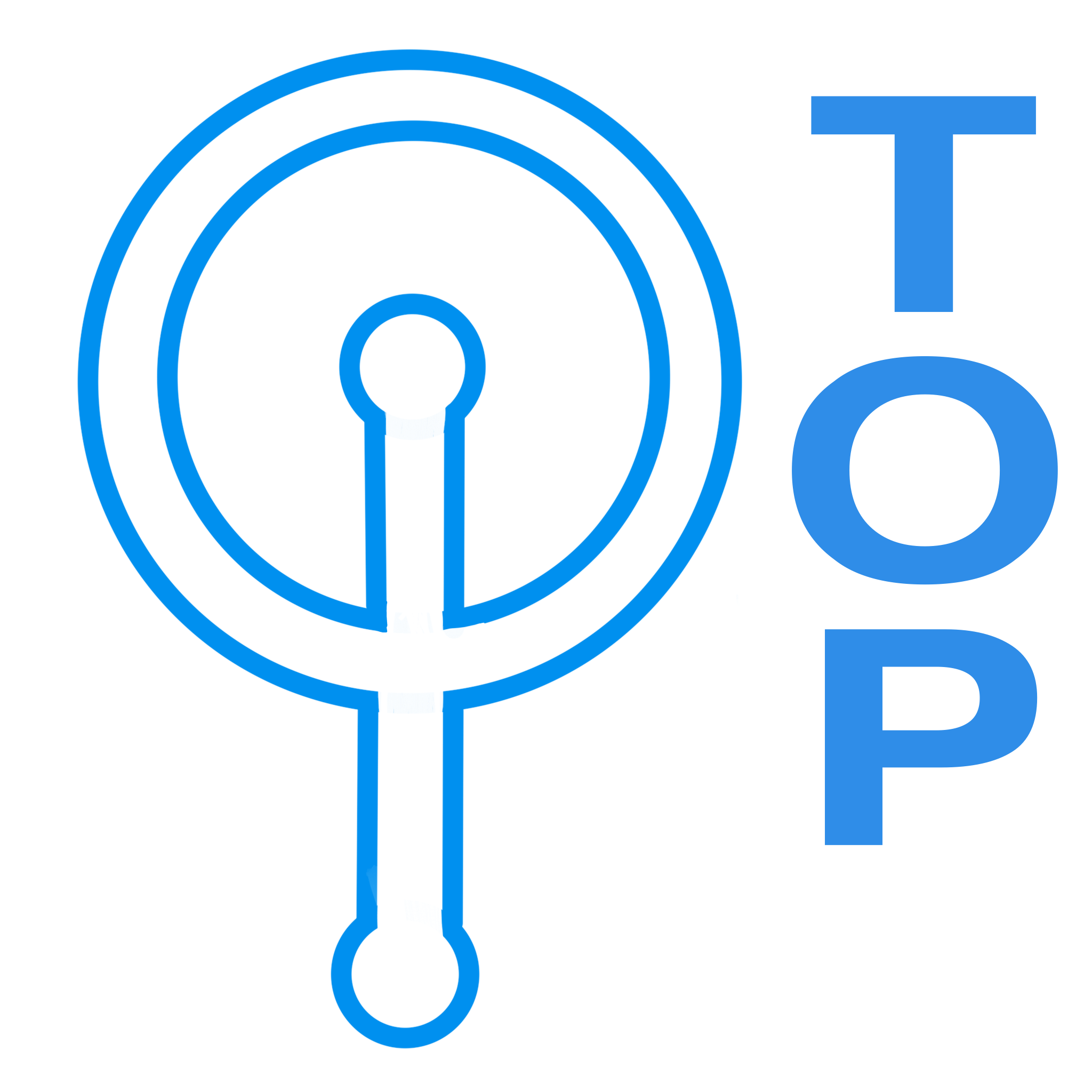 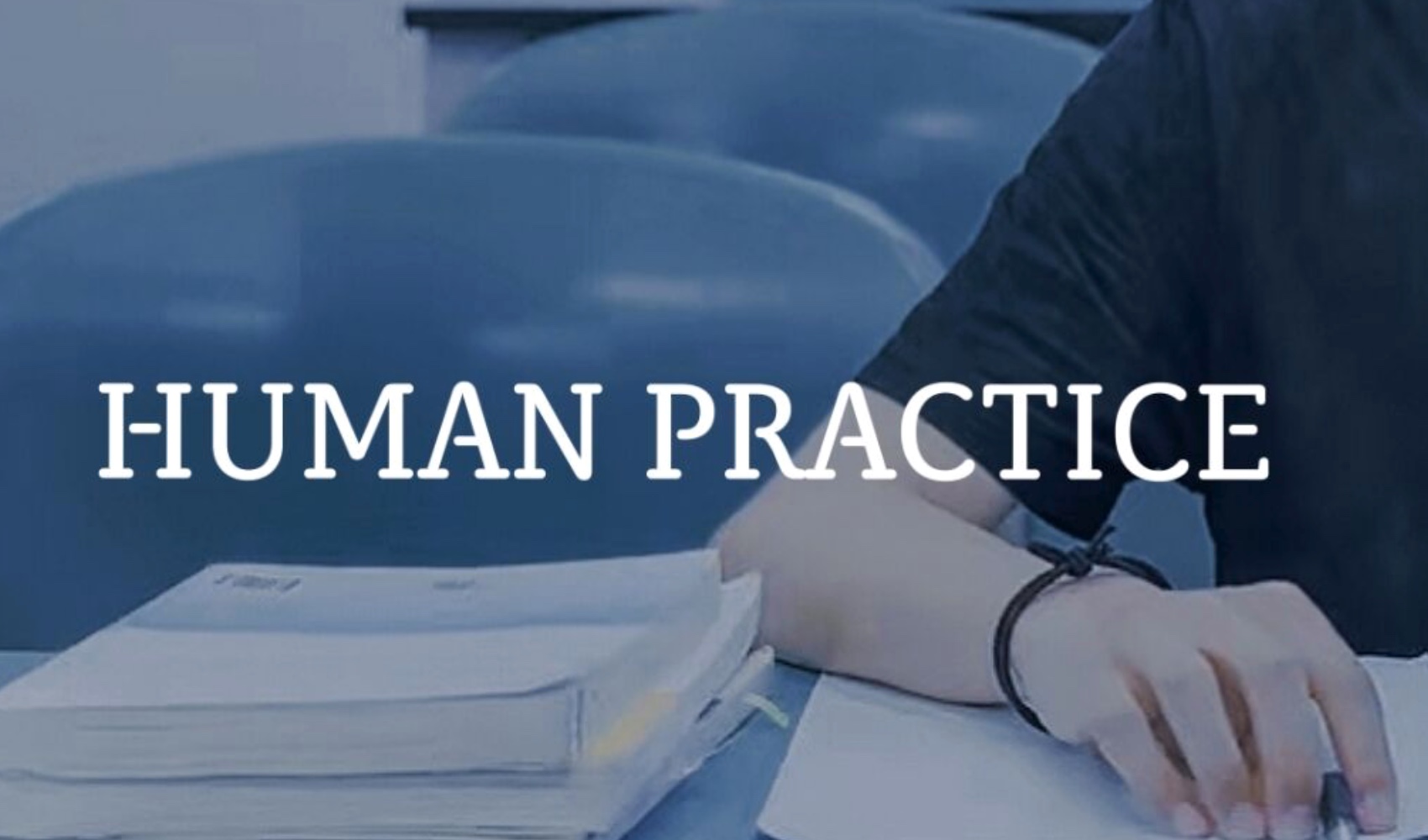 
Our project, inspired by Professor Liang's research, aims to construct a DNA double-loop structure containing hairpin structure, APP sequence and hammerhead ribozyme reporter gene, and make it a possible breakthrough point for future alzheimer's disease research and other studies related to z-DNA configuration changes.The research on Alzheimer's disease is not yet mature, and there are many aspects that we do not know.In order to make our projects socially responsible, our team tries to apply human practices to every step of project implementation.We not only fully considered the impact of our projects on the world, but also conducted interviews with the public and experts to reflect the results and recommendations of our projects.


In previous years, iGEMers has conducted a thorough investigation of the iGEM competition itself and some basic synthetic biology issues, so this year we are focusing on more relevant content of our project.

In order to find out how much people know about z-DNA and relevant knowledge, which is the content of our project, we the team OUC-R 2021 developed a questionnaire and surveyed a wide population. Among the two hundreds of effective questionnaires we received, over 83% are young people aged 18-30, with a 70% undergraduate student rate. The results of the survey are consistent with our expectation that many people do not know about z-DNA, and our ongoing popularization of z-DNA and related contents should help change this situation. 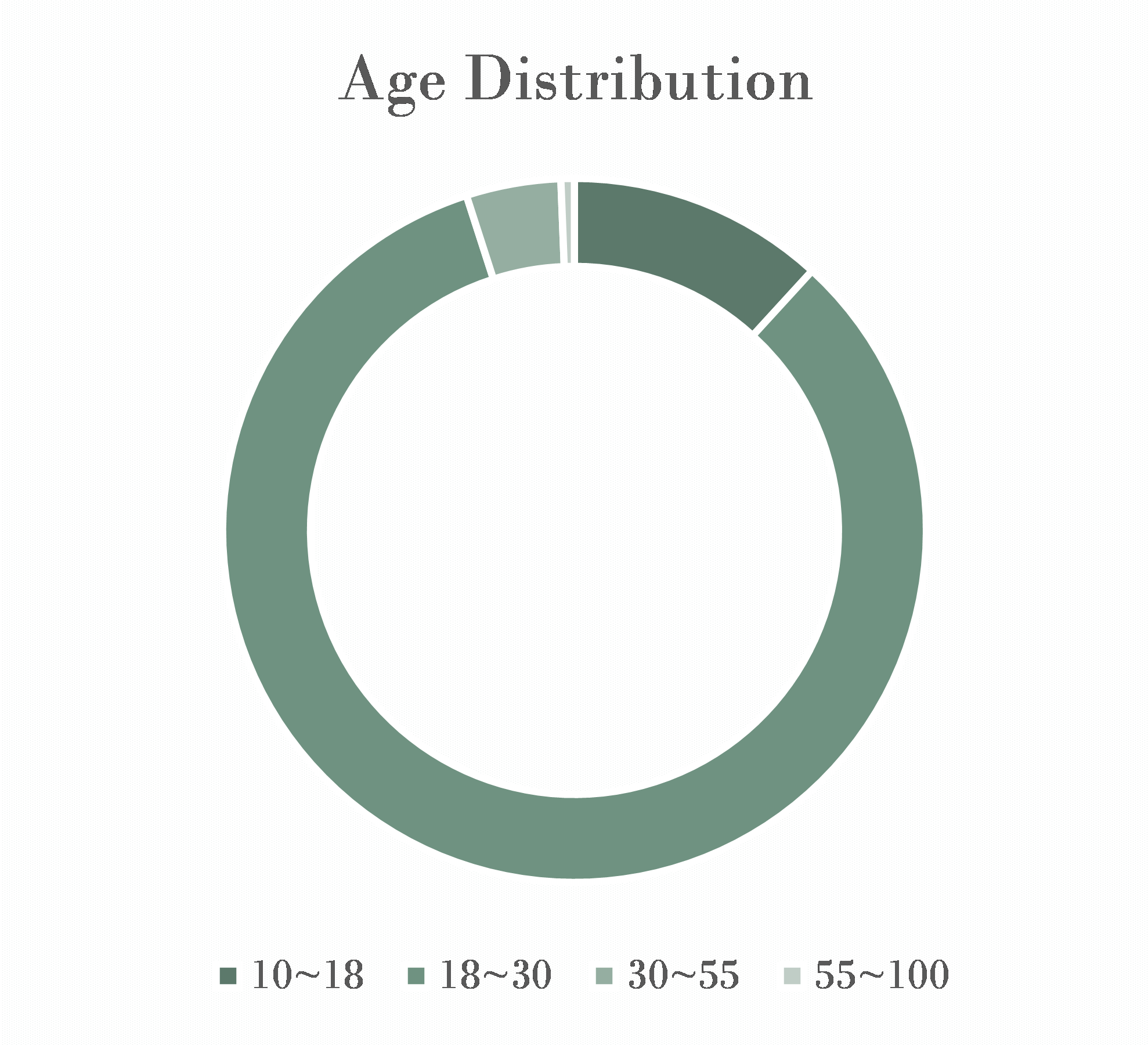 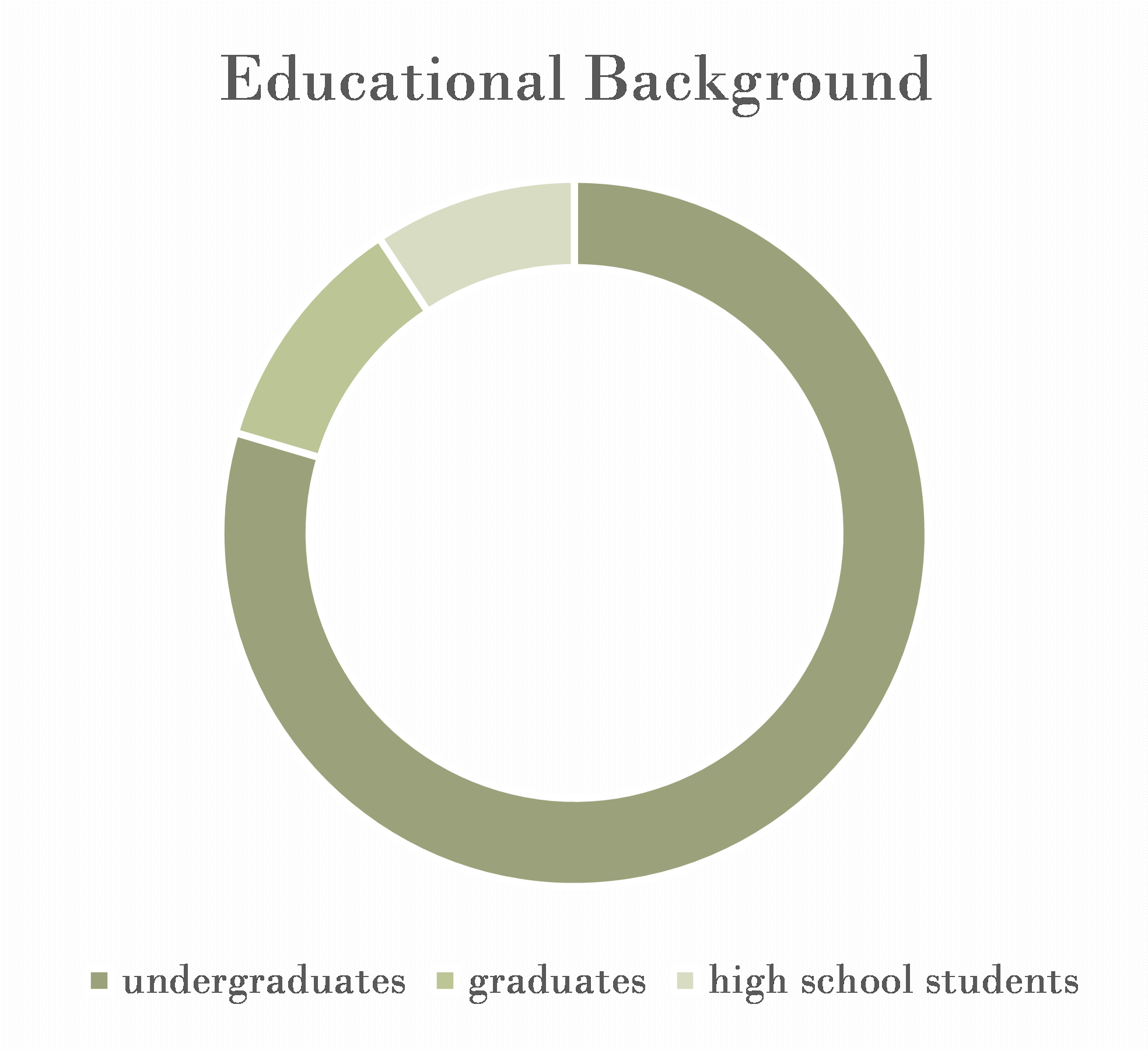 At the beginning of our questionnaire, we focused on whether the respondents belong to biology or related disciplines. We prepared different questions for respondents of different majors, and the following are our survey results.


At the beginning of our questionnaire, we focused on whether the respondents belong to biology or related disciplines. We prepared different questions for respondents of different majors, and the following are our survey results.

In the survey conducted by non-biological respondents, we found that although the general public were aware of the concepts "gene" and "DNA", many of them could not fully describe the function of it in the human body, that is to say, their understanding of these two concepts were only superficial. At the same time, z-DNA was not well understood, with the majority saying that they were unaware of it. 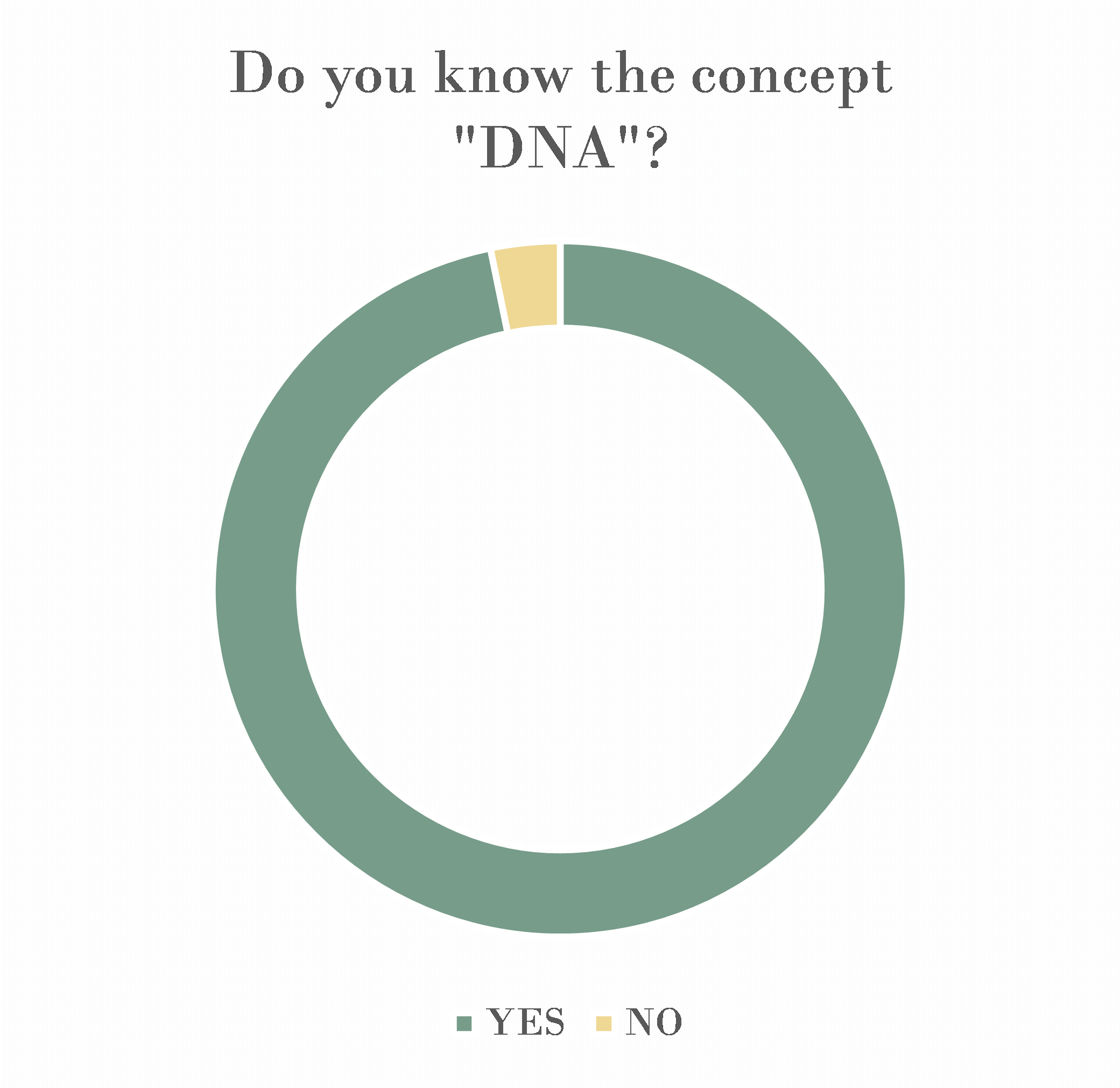 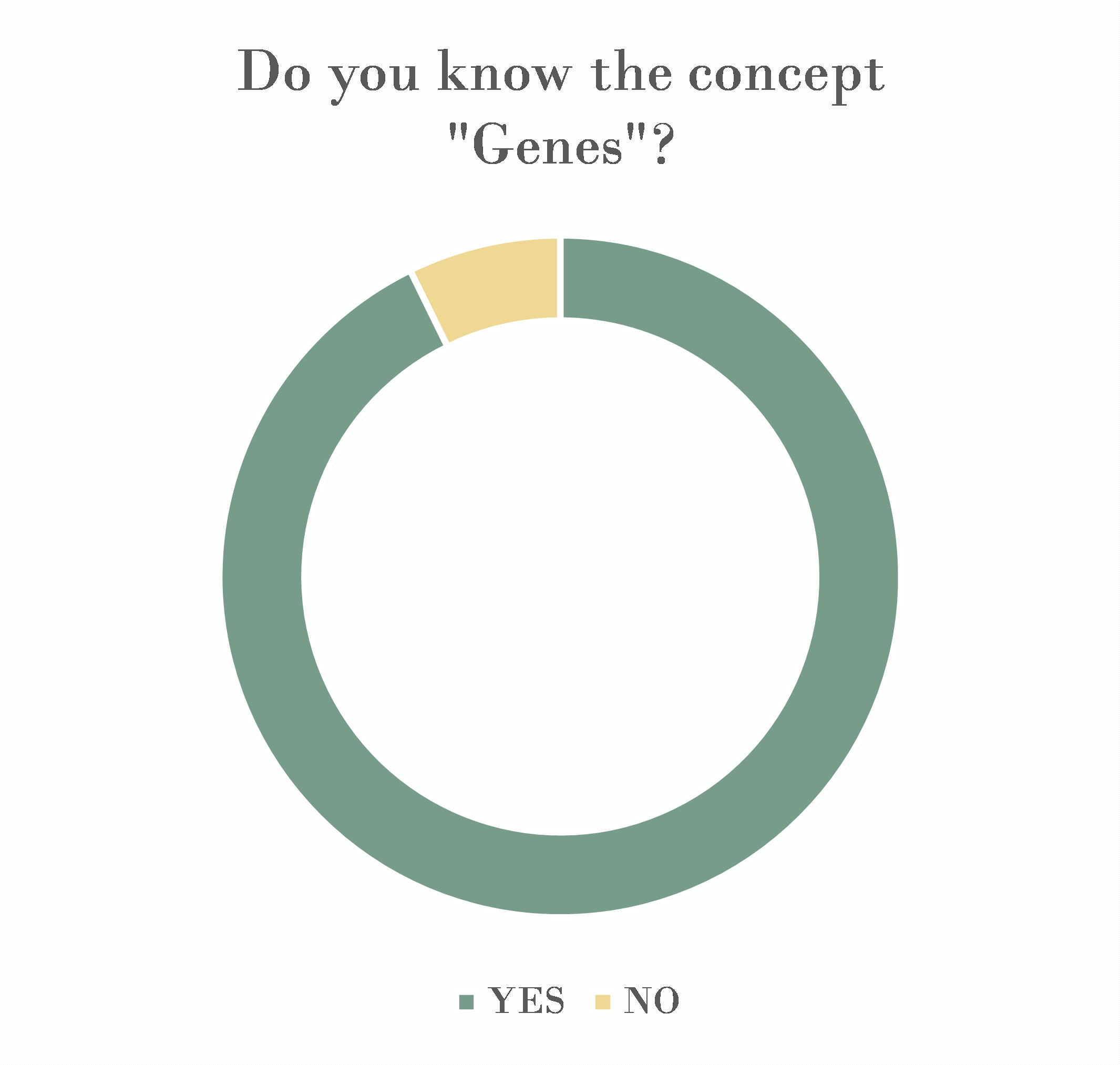 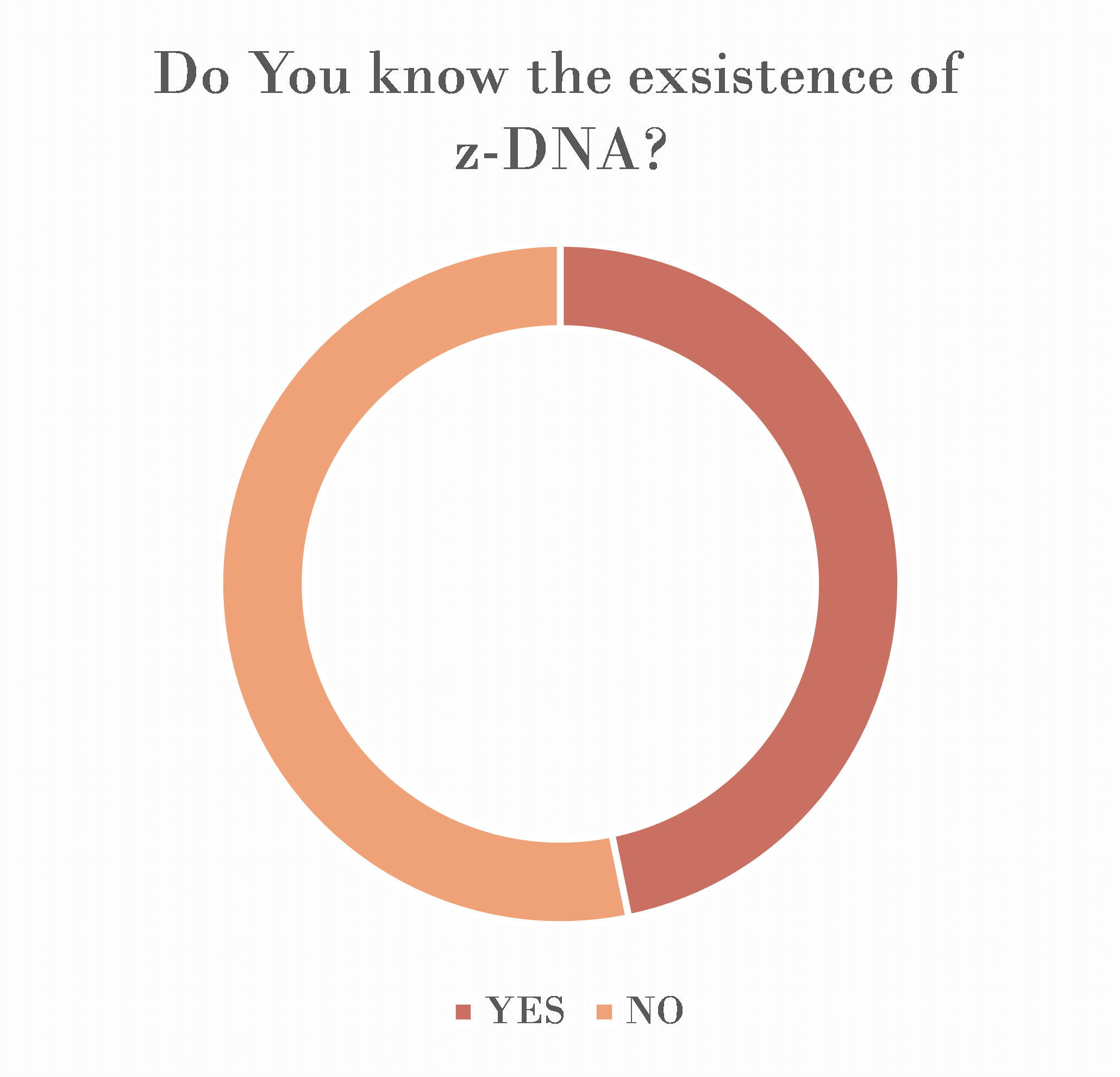 In the investigation of students majored biology, we increased the difficulty of the question and investigated the following contents respectively: DNA structure, structural characteristics of Z-DNA, superhelix, triplehelix and APP sequence. 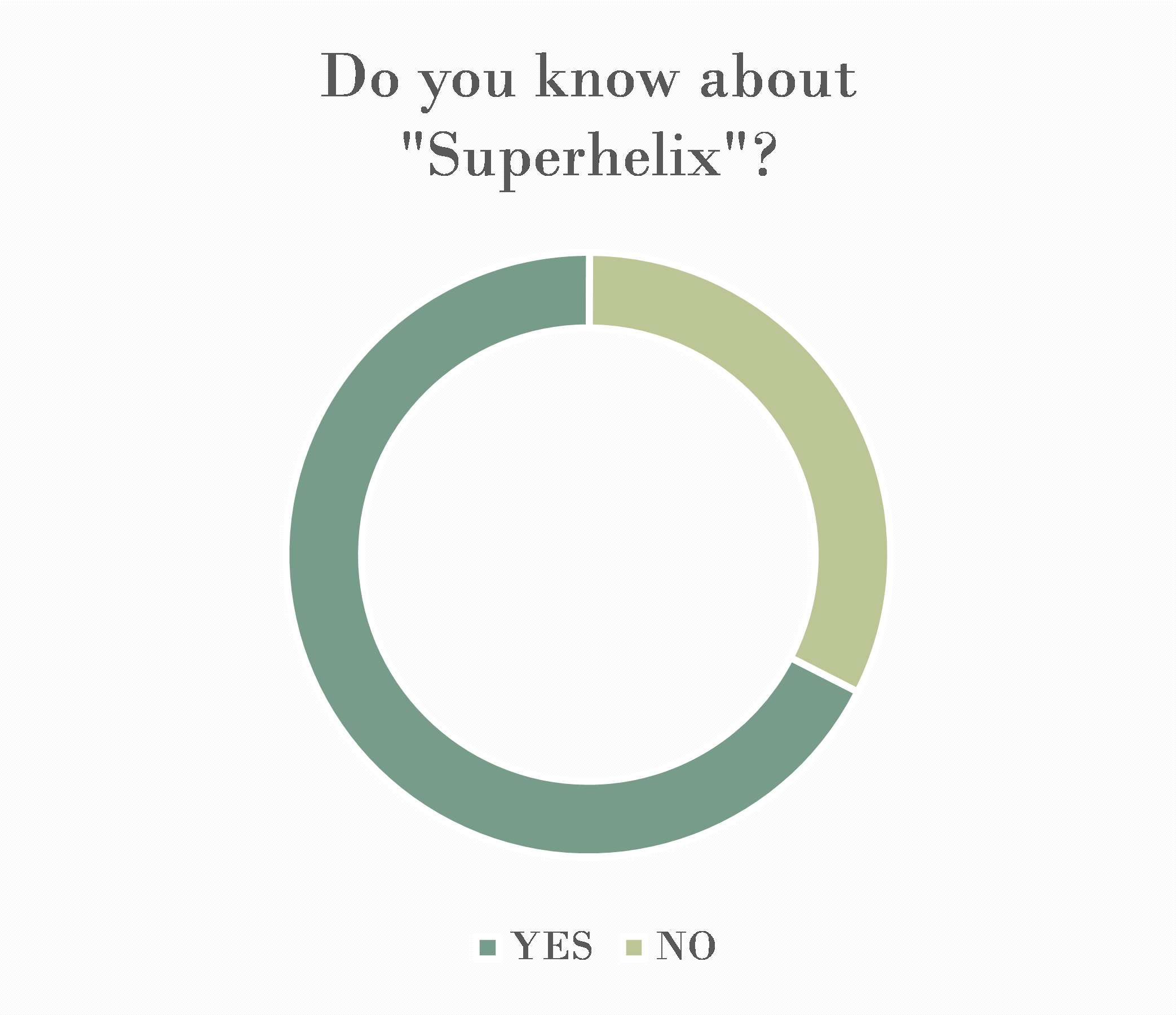 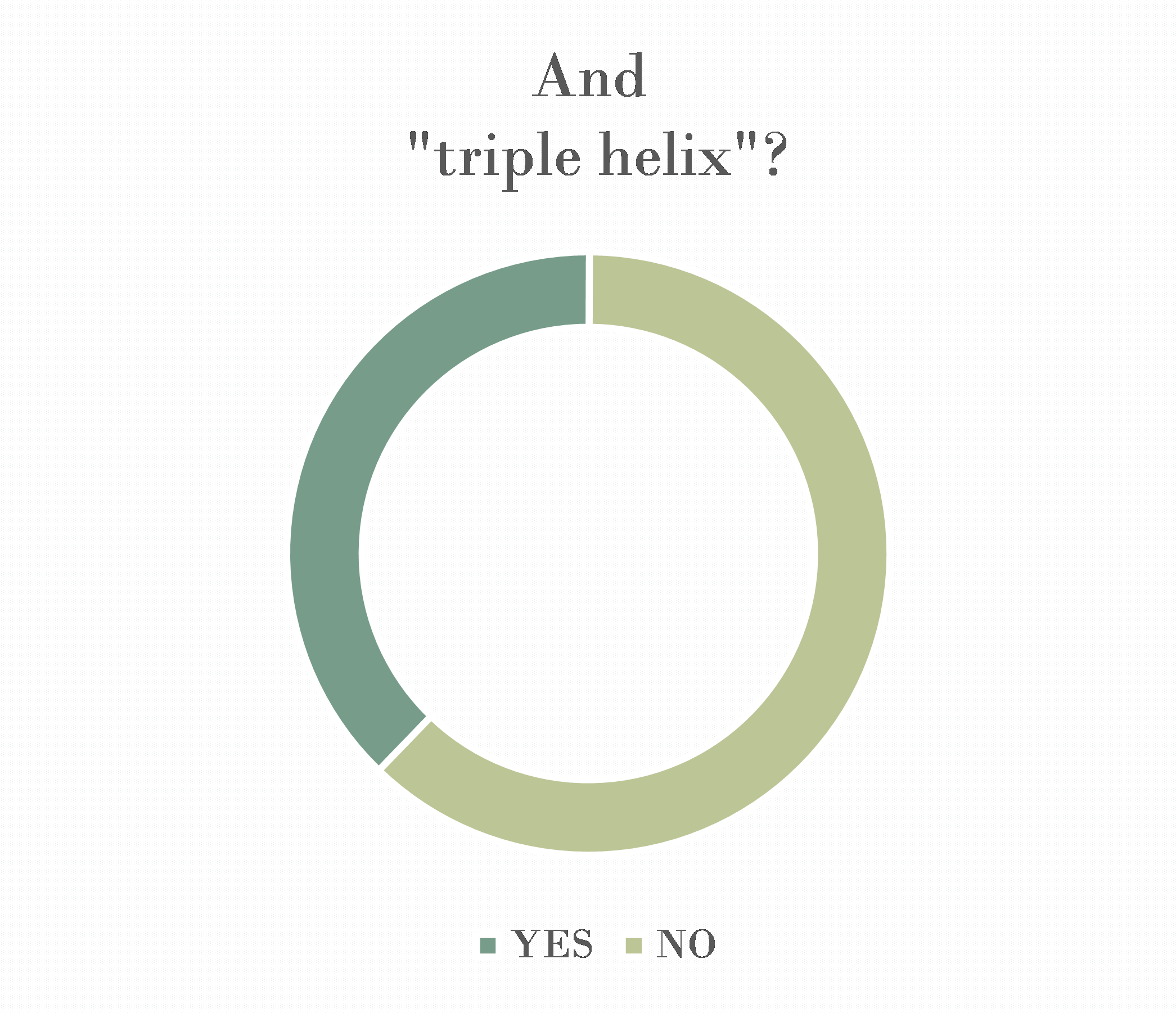 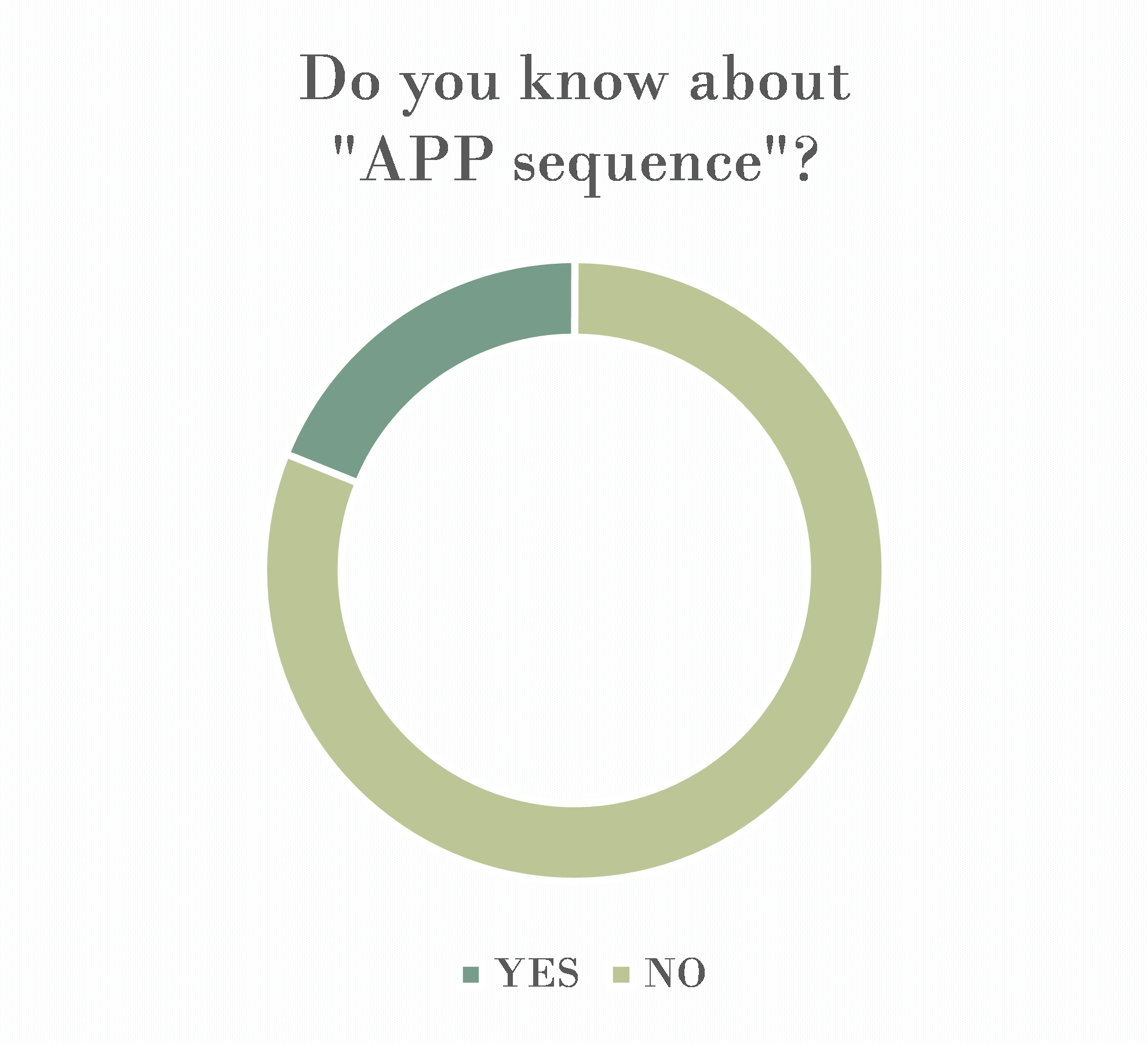 Finally, we wanted to see if people knew what diseases were associated with DNA conformational changes. Although we provided a wide range of choices, including correct answers and wrong answers, as expected many respondents did not know the correct answer and the choices were evenly divided. This further proves that we need to increase the efforts made popularizing relevant knowledges.

Our team OUC-R this year focus on regulatory changes brought about by DNA configuration changes, particularly the conversion between B-DNA and Z-DNA. The research content this year is largely based on the research results of Professor Liang Xingguo, whose research is at the forefront of the field. Therefore, it is difficult to find professors with similar research content to understand their opinions on our project. Fortunately, we can ask doctors and professors for advice on an expanded area beyond the core of our project, which is research on Z-DNA-related diseases such as Alzheimer's disease(Hereafter abbreviated AD), breast cancer, etc.

It’s important to notice that with the Covid19 pandemic controlling policy, our school is holding us back from going out of the campus(as for our case, to interview doctors in the hospitals), and all interviews is finished with Wechat online as a result.

Literature indicates that the onset of AD may be related to the conversion of B-DNA to Z-DNA, so we first consulted doctors in The Affiliated Hospital of Qingdao University and Qingdao Municipal Hospital on this issue. At the recommendation of the doctors, we got in touch with Dr. Wang Xin, a neurologist who has carried out clinical treatment of AD in the municipal hospital. She also holds the position of external professor in the School of Medicine of Ocean University of China. We consulted and interviewed her based on our team's projects and references.

We first learned about the clinical treatment of AD. According to the information provided by Professor Wang Xin, there is still no effective treatment for AD in China at present. Within the scope of clinical treatment, all that is done is to use drugs and treatments to delay the occurrence of symptoms, which is the so-called "what symptoms appear, then what drugs." The more commonly used treatments remain largely where they were a few years ago. Under such conditions, any breakthrough in any field is something to be encouraged.

We then introduced to her the content of our team's iGEM competition and its possible connection with AD. After listening to the introduction, Professor Wang said that the content of our project was actually quite different from clinical treatment, because relevant theoretical research was still superficial and had not been applied to the clinical field, so she was not sure whether our project could help the treatment of AD. However, according to our description, the content of our research should be helpful for early detection of AD.

At the same time, she also said that Ocean University of China is a leader in the research of AD, and she hoped that we could learn more about it from professors in theoretical research，probably from our university. The content of our project aims to regulate gene expression through the control of DNA configuration changes, and if the theoretical research is indeed related to the transformation of B-DNA to Z-DNA in the pathogenesis of AD, then our research may be of great help to the research of AD.

In our next interview, we plan to talk to an Alzheimer's researcher at ocean University.

Also, we learn from articles that breast cancer is also related to DNA configuration changes, so we also decide to do interviews about it. 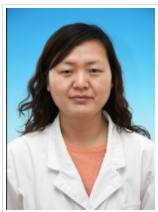 
After the communication with professors from Qingdao Municipal Hospital, we know that Ocean University of China is in a leading position in the field of AD. For this reason, we searched the official website of the university and contacted Guan Huashi, an academician in Marine medicine research. Guan is an academician of the Chinese Academy of Engineering, and his team is responsible for the developing of a newly publicized drug for AD. He is usually busy with his work, so we managed to contact his students as a substitute to learn about the new AD drugs that have caused certain discussions at home and abroad and some contents related to this disease.

After the interview, we learned that in addition to the new drug “九期一” developed by Ocean University of China, there have been other drugs to deal with AD on the market, for example, aducanumab, which has some similarities to our hypothesis, targets amyloid beta protein to stop AD from happening, but the new Alzheimer's drug developed by Ocean University of China uses a different pharmacodynamic mechanism to deal with AD.

Academician Guan said that now the majority of patients are found with the disease because symptoms appear, among them, forgetful, confused, do not know familiar people and other phenomena of patients become the primary reason for treatment, so we still need to find ways to solve the trouble brought by this disease. He also introduced us why their drug is controversial:

The pathogenesis of AD is very complex and the disease is very long. In the long 20-year disease process, there are many important factors involved in the occurrence and development of AD, including commonly believed hyperglycemia, hyperlipidemia, neuroinflammation, nerve damage, and even obesity and cardiovascular diseases. In such a state, it is difficult for us to use a gene, or a single target drug to carry out the intervention and treatment of AD.

After understanding the content of our project, they expressed their expectations for the future of the project, but they also hoped that we would not be too attached to the diagnosis of AD. That is because not only is Aβ protein difficult to obtain in human samples outside of brain tissue, but also there is no consensus on the pathogenesis of AD. Of course, they also think that our research is of some value, and they also expect that with the development of science and technology, maybe one day our design elements can provide some help for the early diagnosis of AD.

Other interviews and talks


We have focused on the research mostly with AD, so at last, we asked the breast cancer research professors at Qingdao Municipal Hospital what they thought about our project. We then received the following responses, which are summarized as two key points:

1. Compared with AD, there are abundant treatment methods for breast cancer. For example, many iGEMers over the years are aimed at solving the diagnosis and treatment of breast cancer and have achieved quite good results. For this disease, there is no need to focus on the possible link between the pathogenesis and changes in DNA conformation, and more attention should be paid to developing existing treatments.

After a period of interviews, we also deeply realized that there are some inadequacies in the original design, such as the detection of AD still being not realistic today. Therefore, we expanded on the design of the original Alzheimer's disease detector and turned to more research on some characteristics of Z-DNA, aiming to provide some experimental content for the subsequent iGEMers. It is hoped that one day these diseases caused by DNA conformational changes will be completely solved.