1. The emergence and application of antibiotics

Fleming was the first to discover the first antibiotic, penicillin, in 1928[1]. The discovery of antibiotics has been one of the most important achievements in human history in the last century. Since penicillin was discovered and used in clinical practice, it has saved the lives of countless patients suffering from infectious diseases. With the development of science and technology, the utilization of other novel antibiotics also has been developed rapidly.

Antibiotics could inhibit and kill bacteria, viruses, and parasites. In addition to being widely used in human treatment, it is also widely used in animal husbandry, feed industry and agriculture, including animal epidemic prevention, improving feed conversion efficiency, promoting animal growth, and improving industrial production. Since the 1950s, antibiotics have been used in animal husbandry for growth promotion, therapy, and disease prophylaxis. It is estimated that up to 80% of the antibiotics produced by the pharmaceutical industries are used in food industry. And, most of them are used as feed additives at sub-therapeutic levels to promote growth[1].

2. The problem of antibiotic abuse

Since penicillin was introduced into the clinic in 1940, there have been thousands of antibiotics. The development of antibiotics in the clinical application significantly promoted the treatment of infectious diseases. However, the irrational use and abuse of antibiotics have led to a significant increase in the incidence of nosocomial infection, which has brought great difficulties and challenges to infection control and aroused widespread concern in the medical field.

Studies show that the indiscriminate use of antibiotics has led to the emergence of multidrug-resistant pathogens that threaten both animal health and human health, including vancomycin-resistant Enterococcus (VRE), Methicillin-resistant Staphylococcus aureus (MRSA) and carbapenem-resistant Enterobacteriaceae(CRE)[2].

Fig. 1. The effect of growth-promoting antibiotics usage in animal husbandry and the potential alternatives for livestock in disease prevention and growth promotion[3].

In 2010, the global antibiotic consumption in the animal husbandry was conservatively estimated at 63,151 tons. Concurrent with the success of antibiotics for treating infections, the emergence and rapid dissemination of antibiotic-resistant bacteria pose substantial risks for human health. Antibiotic resistance has become an increasingly severe problem with global human deaths due to antibiotic-resistant infections predicted to reach 10 million by 2050, more than the current death toll associated with different forms of cancer[3]. 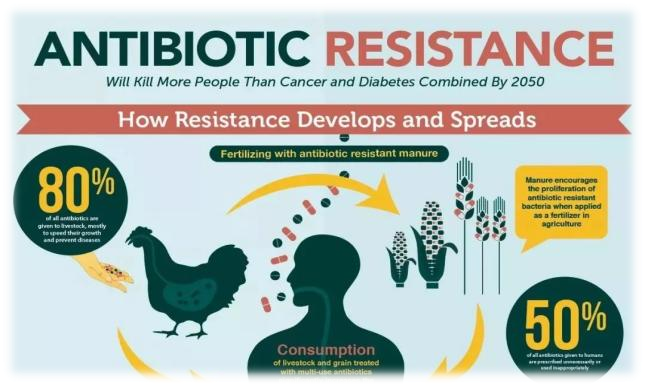 With the unprecedented increase in the number of resistant pathogens, especially resistant bacteria, and the absence of new antibiotics in nearly 30 years, the problem of drug resistance has become a severe public health threat. In addition to standardizing and controlling the use of antibiotics. Finding safer antibiotic substitutes has become a promising solution.

Among them, engineering antimicrobial peptides (AMPs) has aroused people's interest as a feasible solution to this serious problem of antibiotic abuse, and its potential antibacterial application is being explored. AMP is produced by all organisms from prokaryotes to humans, and plays an essential role in innate immunity[4]. It is essential for the innate immune system to provide immediate and effective nonspecific defense against infection. Antimicrobial peptides are attractive candidates for the design of new antimicrobial agents due to their natural antimicrobial properties and low susceptibility to bacterial resistance as well as the characteristic properties of their distinct mechanism of action (Table 1), broad-spectrum antibacterial activity, higher efficacy at low concentrations, target specificity, biodegradability, smaller size, and synergistic action with classical antibiotics[2].

In addition, in the field of animal husbandry, AMPs have beneficial effects on growth performance, nutrient digestibility, intestinal morphology and gut microbiota in pigs and broilers[3].

Table 1. Different modes of action that have been described for AMPs[5]. 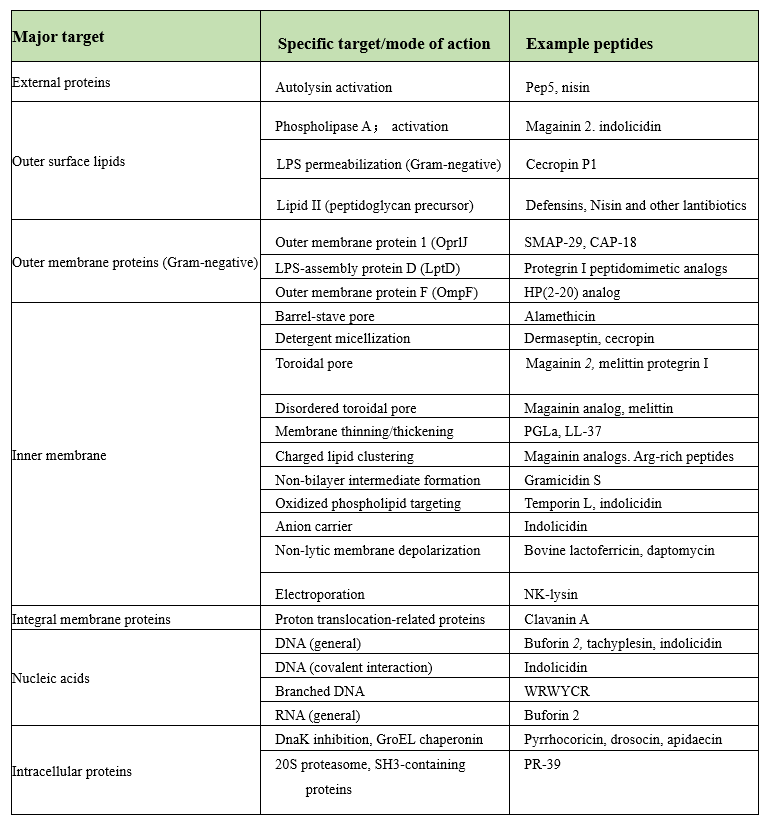 Generally, there are usually three ways to produce antimicrobial peptides: genetic engineering technology, extraction from plants and animals, and chemical synthesis. Extracting AMPs from plants and animals is characterized by low yield, complex process, time-consuming and laborious process, which cannot be mass-produced. Chemical synthesis method can be mass-produced, but it is difficult to ensure purity of AMPs and the reaction conditions are strict. Moreover, concerns about the sustainability of fossil fuel resources and environmental pressure, together with product security, have provided strong incentives to develop renewable AMPs production method. Microbial production by genetic engineering technology provides an attractive alternative to overcoming drawbacks in the chemical synthesis and extraction from plants and animals.

Although AMPs are used in such a variety of applications, there are still some limits to achieve their continuous and large-scale production. In particular, Escherichia coli is the most classic prokaryotic expression system in synthetic biology. This system has some significant advantages, including growing well on cheap carbon sources, having mature genetic manipulation methods, and exhibiting robustness in large-scale fermentations. Therefore, Escherichia coli BL21 (DE3) was selected as the platform cell in our project. However, the expression of antimicrobial peptides genes is problematic due to the natural toxic effect of the proteins to the expression host. Moreover, AMPs are easily degraded by proteases, which is also a primary reason for restricting the production of AMPs.

Combined with team members' brainstorming and experts' suggestions, we decided to use the mature pET expression system to produce AMPs, and find the most suitable protein synthesis rate for different AMPs by adjusting the expression intensity of T7 RNA polymerase in Escherichia coli BL21 (DE3). Our goal is to efficiently produce a variety of different kinds of AMPs, thus realizing "Customized production of specific AMPs".