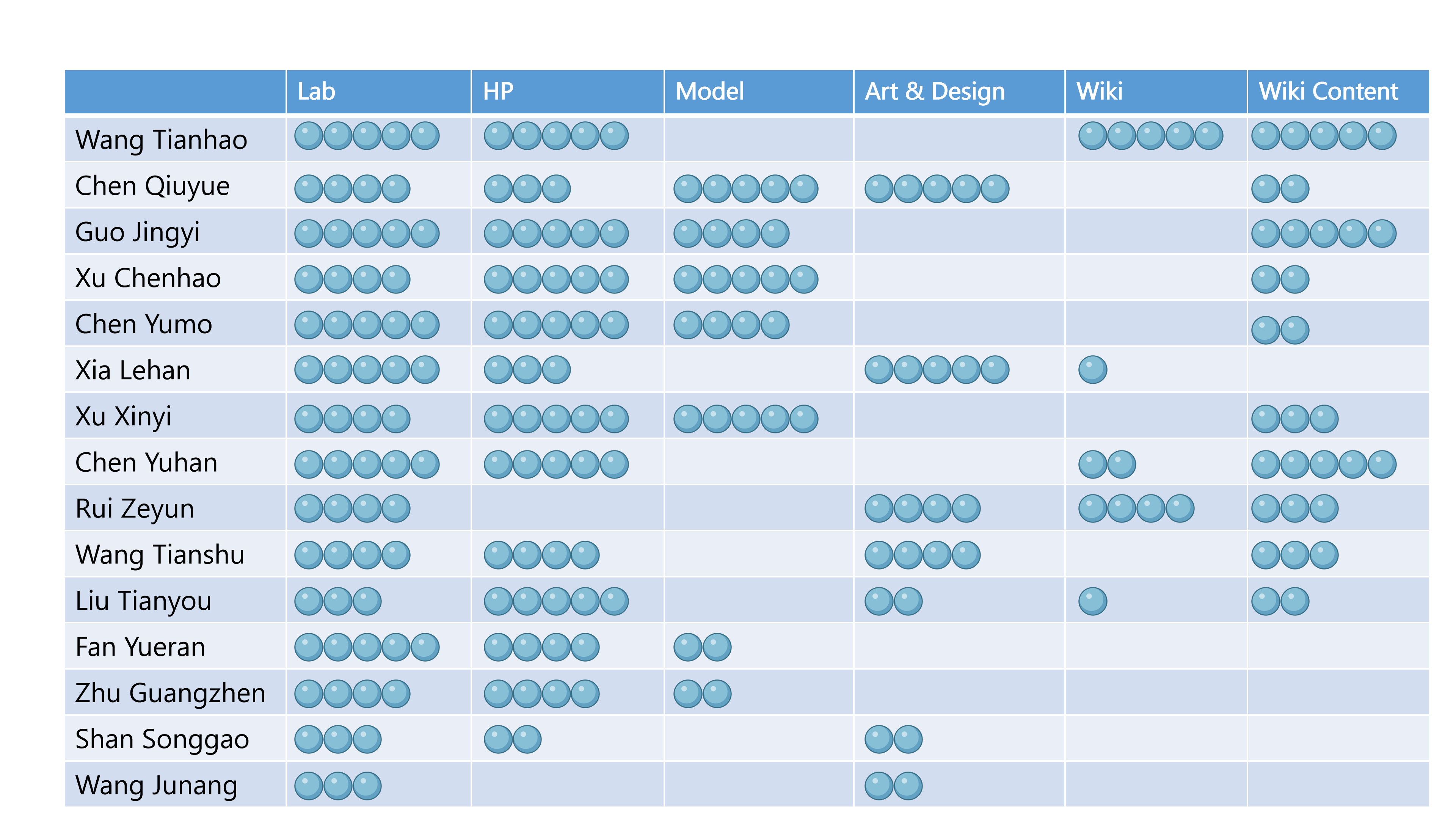 1 - did nothing in the group

2 - did a little work with poor results

4 - did relatively large amount of work

5 - did the majority of the work with great results

1. Participate in part of the experiment in the early stage on constructing and transforming plasmids into microorganisms.

2. Designed the plot of the promotion video.

3. Designed most of the PowerPoint and posters for meetings and HP activities.

4. Collaborated with Sophia for constructing our wiki structure and designing the navigation bar. Code for all of the pages of "Human Practice" and part of the "Lab" pages and "Team" pages.

3. Participated in the experiment and carried out a series of treatment of arabinoglycan, caffeine and other molecules.

3. Design and create the two handbooks we made for our human practices. Helped translate part of legal proposals.

4. Designed our wiki home page and created the description part of the home page .

5. Created seven out of the eight icons for the Project part of our wiki as well as three additional icons that describe the three main uses of Hidro.

1. Participated in the early and middle stages of the experiments including the construction of plasmids and the preliminary experiment of making hydrogel.

2. Edited most of the videos for the entire team, including making images, searching background music, and so on.

3. Took part in writing and revising the law proposal, wrote part of the business brochure and articles about biology and AI for our official accounts with other members.

4. Brainstormed many designs including our logo and home page of the wiki.

1. Participated in brainstorming and selected topics with teammates.

3. Participated in the preliminary experiments and the writing of Wiki.

4. Took part in the writing and revision of legal proposals, contacting a member of the National people's Congress, summarizing and analyzing of the results of the questionnaire and an official account of a popular science article on CAR-T technology.

1. Took part in the early stage of the experiment of constructing genetic circuits.

2. Participated in revising the Chinese Biosafety Law. Made suggestions on how to improve the prevention and control part of the biosafety law and composed the final proposal.

3. Composed the first edition of one of our handbooks.

4. Researched during the initial stage of designing the model for describing the relationship between caffeine and the diet factor.

1. Designed the clock-in plan of modeling and coding study for my group members. Participated in and controlled the modeling process of our projects.

2. Participated in the first half of the experiment, mainly worked on plasmid construction.

3. Participated in the speech writing of CCIC.

4. Added animation and special effects to the entire PV.

7. Hosted one of the HP interviews about laws and also the camerawoman for the education lecture of biology safety and our project in Beijing No.4 High School.

1. Directed, wrote the script, videoed the promotion video and assisted with subtitles and animation.

2. Helped with questionnaire design, law proposal drafting and revision; collaborated with Jade and Angelina Wang on an article about biology and artificial intelligence for our Official Account.

3. Gathered ideas for subpage designs; scheduled wiki construction process; taught group members some basic skills required for wiki editing; completed wiki structure constructions and navigation bar design with Evelyn; coded "Home", "Parts", all the pages of "Project", part of "Lab" and "Team" pages; edited the majority of the videos on our website; held wiki group meetings every week; and communicated with other groups for materials needed.

4. Made the Hidro preparation tutorial video.

5. Took part in experiments, including plasmid construction and hydrogel preparation.

6. Presented the project's application in CCiC.

7. Wrote text for webpage Proof of Concept, Safety, and Protocols.

2. Summarized the Bacterial strains list, recorded the time, name, resistance, and the Plasmid profiles of the plasmids.

3. Represented the team in a multilateral forum and in CCIC, which allows us to exchange ideas and search for collaboration.

4. Assembled lectures in Beijing No.4 international campus, contacted the place for holding the forum.

5. Did the research in the initial phase, constructed and conceived the caffeine model.

1. Involved in brainstorming and research, and voted as a team leader.

2. Contacted sponsors, prepared documents for the weekly held group meetings, and hosted them.

3. Involved in the production of the promotion video, wrote the lines for the whole play, and selected the background music.

4. Led and did most parts of the experiment.

5. Presented the project and experimental design in CCIC.

6. Wrote the whole description page and part of the other sections of "project" and "home". Helped others with their parts and did initial proofreading of their writing.

8. Did research and summaried for next steps in human practice, designed questionnaires, worked with others on an article which was part of education and wrote her share of the law proposal as well as proofreading the parts written by others.

1. Participated in the early stages of the experiment on constructing and transferring plasmids into microorganisms.

2. Designed the education program and organized three offline events and one online event.

3. Participated in the designing and production of our education and business brochure.

4. Participated in the design of our logo and communicated with the human practice group.

1. Participated in the design of NDNF logo and many icons that will be used in wiki.

2. Finished the first draft of the education pamphlet .

3. Participated in planning a small lecture about symbiology in our school and took photographs.

4. Participated in the starting part of the experiment, including transferring plasmids into microorganisms .

1. Involved in experiments and initial brainstorming of the promotion video.

2. Planed the schedule of HP work, and led for the most activities in education.

3. Wrote and edited a section of legal proposal based on specialists’ advice. Designed the interviewing questions and contacted various experts in the field.

4. Organized the education presentation with my partners in BNDS school and collected precious data from that.

7. Participated in the weekly group discussion and edited videos.

8. Wrote the content of the HP intergrated and law pages.

1. Participated in part of the experiment in the late stage on testing several properties of the hydrogel.

2. Participated in designing the plot of the promotion video and conducted the preparation work for firming and acting as a reporter at the beginning of the video.

3. Participated in writing safety form and application for scholarship.

4. Took part in researching and editing our legal proposal, organizing the education activity, and taking pictures as well.

5. Joined the early preparation for constructing our model.

1. Took part in the construction and transformation of our plasmids .

2. Communicated with the teams of Bluepha Lab in Shanghai and Shenzhen.

3. Took part in choosing and recomposing the music phases in our promotion video.

4. Cooperated with ChenHao Xu to accomplish the blog “Inteins”of popularization of biology in Wechat, and worked together to develop the education lecture of biology safety and our project in Beijing No.4 High School.

Zengpeng Li, for providing us feedbacks about our project;

Zhi Sun, for giving us suggestions on our design;

Xinyu Liu, for introducing us to experts of biosafety;

Yu Tou, for giving us help about Art;

Fifi, for giving us help about Art;

Mufan Yao and Xianxi Chen from Team BNDS_China, for their assistance, particularly with wiki design and coding.