Our iGEM team is modifying photosynthesis through the creation of genetically modified cyanobacteria. Although our selected strain is nonpathogenic and poses no direct threat to humans or animals, responsible lab safety requires active prevention of exposure to biological dangers or the accidental release of organisms. This is especially a priority regarding genetically engineered organisms. Wet lab work demands that organisms are contained within the lab, waste is properly disposed, and workers are kept safe from hazardous materials. The pandemic introduced additional safety concerns which we were able to navigate by using collaborative online platforms and by following the Miami University regulations for lab research. 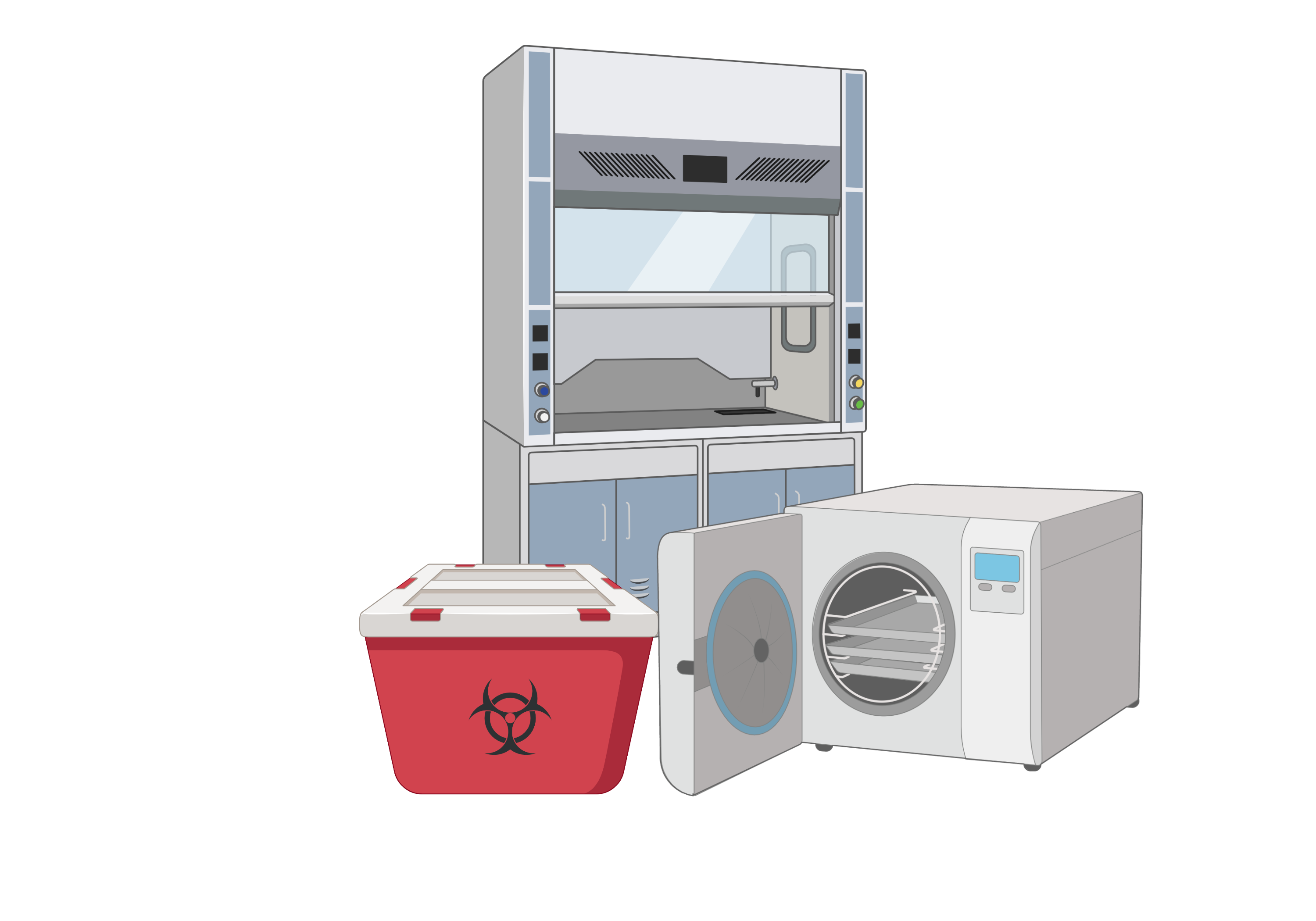 Safety and security begin with project design, as decisions in this phase can significantly limit the risks of wet lab work. Thus, all organisms used in our project fall under Biosafety Level 1 (BSL-1).

We selected a nonpathogenic chassis in Synechococcus elongatus PCC 7942. S. elongatus PCC 7942 has no current evidence of cytotoxin production or cytotoxicity, and is considered the gold standard as a safe host for future biotechnological experimentation and production (1). This freshwater cyanobacterium is not harmful to humans, making it an extremely safe model organism for laboratory work, similar to the decision made by the 2017 UCSC team, who used the same model organism.

The cyanobacteria strain we selected is naturally competent and reliable for transformation (2). However, this strain is not ideal for the cloning of plasmids. We selected Escherichia coli strain DH10β to produce our plasmids. This nonpathogenic strain is a derivative of E. coli K12, a lab strain of E. coli in Risk Group 1 commonly used in iGEM projects. 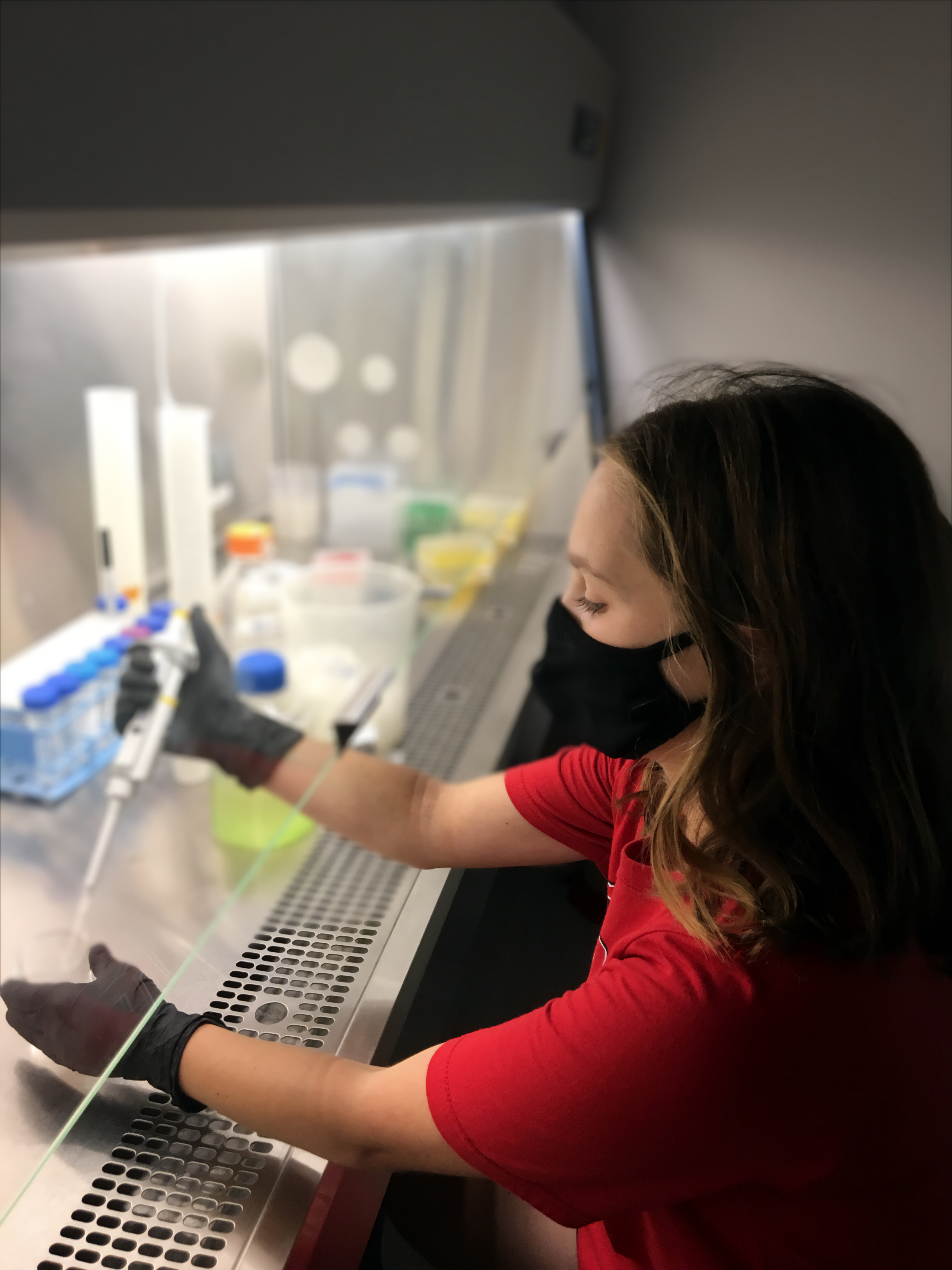 Photo of Daria As with any form of laboratory work, it is important to identify where hazards to health and safety may arise. From there, a scientist must take precautions to avoid accidents and know how to respond if they do occur.

All wet lab work was conducted in Dr. Xin Wang’s lab within the Department of Microbiology at Miami University. This project was executed under the guidance and supervision of either Dr. Wang or his graduate students Shaun Jiang and Shrameeta Shinde, who all regularly work with the techniques we used for this project in their regular studies on metabolic engineering with cyanobacteria. We are extremely grateful to this team for teaching us proper safety protocols and assisting in their implementation.

As a BSL-1 lab, there were clear guidelines that each student followed. Appropriate clothing (long pants, tied back hair, closed toe shoes) and safety equipment such as gloves were always worn when conducting experiments. No food or drink was allowed into the lab.

While most of the components used in wet lab work were safe, a major exception was the ethidium bromide used for DNA visualization during gel electrophoresis. This intercalating agent is hazardous due to its carcinogenic properties. As such, ethidium bromide and its associated materials were always handled with gloves in a designated gel electrophoresis area. All equipment used in this area was considered contaminated with ethidium bromide, and thus items such as pipettes and ingredient containers were kept in this area and not handled without gloves.

Any other reagents used were for standard protocols and were commercially available from reputable suppliers. Many of our protocols and supply kits for plasmid work came from NEB, which has publicly available protocols detailing safe and efficient use of materials. Gloves were changed regularly to limit contamination and spread of any chemical or biological agents.

Our lab was also equipped with a variety of equipment for proper handling of microbial organisms. A vertical laminar airflow hood was used for all processes involving transformation or transfer of microbial organisms, limiting risks of contamination to the colonies and ourselves. All biological waste was sterilized by autoclave before being sent to designated university waste disposal services for the Microbiology Department. Similarly, all pipette tips, centrifuge tubes or other disposable wastes were autoclaved and disposed of by university services. We further noted the location of important safety features such as the glass waste disposal, a fire extinguisher, a safety shower, and an eyewash station. 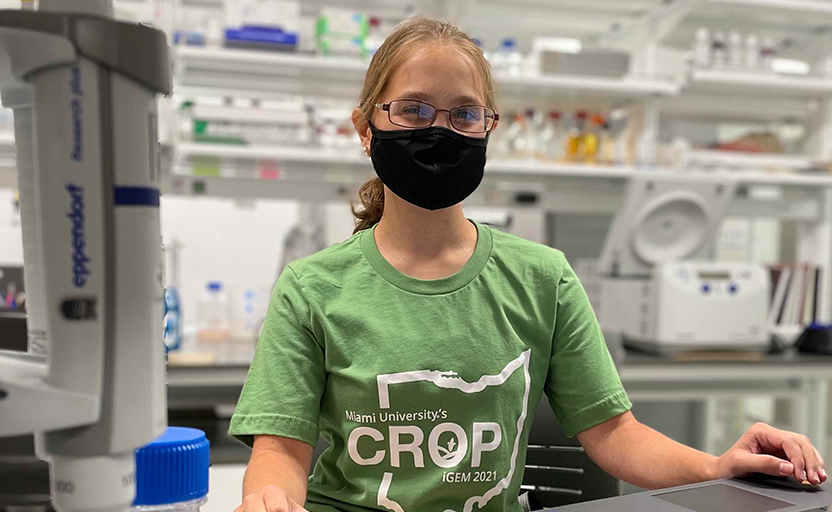 Photo of Daria With the emergence of the COVID-19 pandemic and the threat of new strains, it was imperative to limit in-person contact and take precautions when contact couldn’t be avoided. Remote team meetings over Google Meet were utilized to allow team members to communicate and organize without risking the spread of disease. When local ordinances and university guidelines allowed, we held in-person meetings. In these meetings, team members socially distanced and wore masks, excluding brief team photos when given administrative permission. In response to the spread of the COVID-19 Delta variant, Miami University has reimplemented the requirement to wear a mask on campus while indoors. All wet lab workers, which totaled 4 student team members, wore masks and socially distanced themselves during lab work. Although wet lab workers were fully vaccinated, they were still expected to perform health assessments at home before reporting to the lab.

Due to the possibility of modifications in cyanobacteria being implemented into edible crops, our project raises concerns on the safety of genetically modified organism (GMO) consumption. Genetic engineering laid its foundations thousands of years ago in the selective breeding of plants, when people picked out the tallest wheat or the largest potatoes to be bred for next year’s crop. 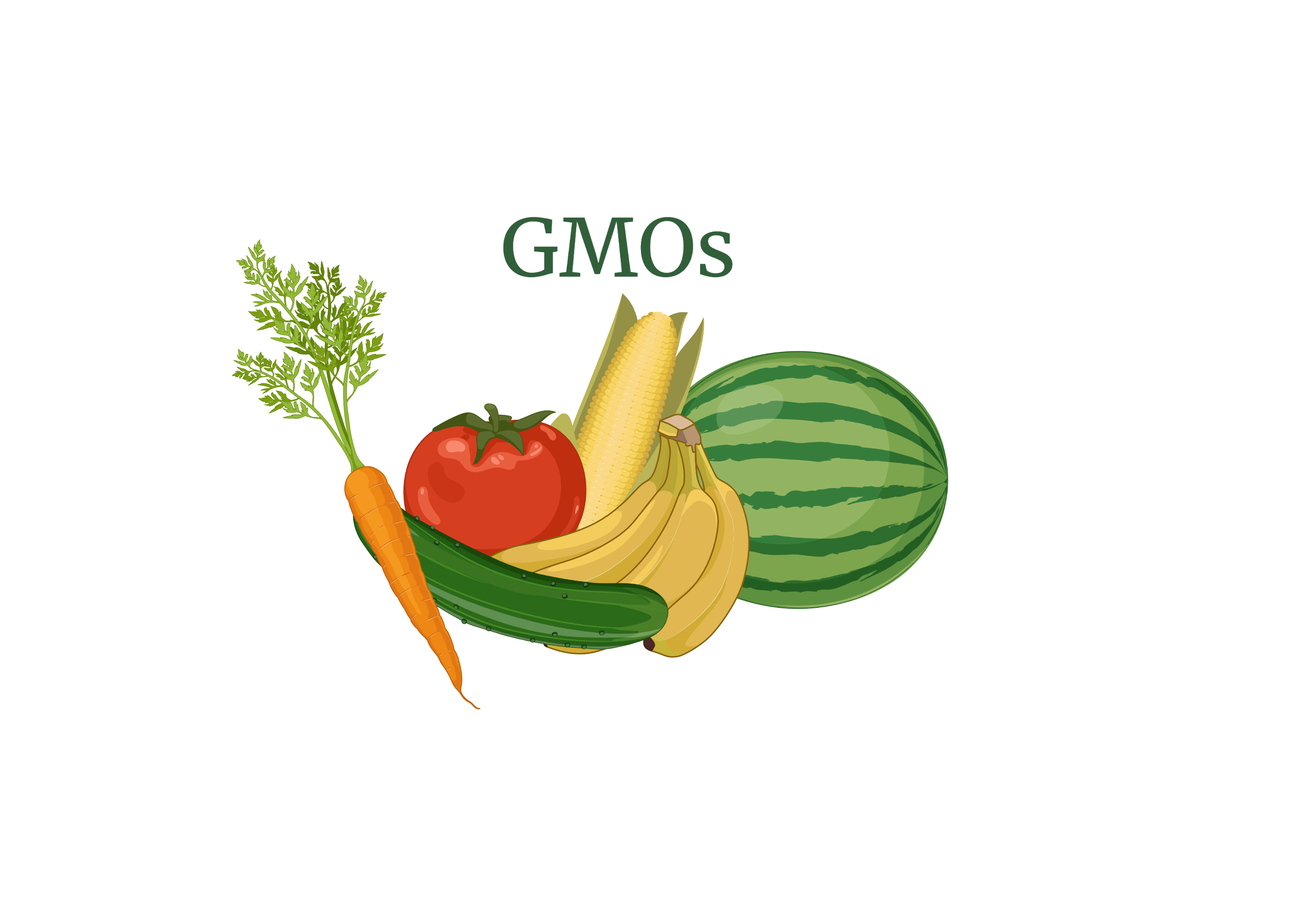 Today, humans can directly manipulate genomes using recombinant DNA technology. This purposeful creation of altered organisms allows rapid integration of desired traits, accomplishing what may have taken centuries in just a matter of weeks. This process also allows for new traits to be introduced that a plant may otherwise lack. A famous example is Golden Rice. Golden Rice is a genetically modified rice strain with corn and bacterial DNA added to its genome to produce beta carotene, a vitamin A precursor (4). Consumption of this precursor could alleviate the widespread vitamin A deficiencies in Asia and Africa, yet the strain has not been widely adopted.

One major hurdle is the popular belief that GMOs are not safe for human consumption. For all food research, the established safety standard is to declare an absence of danger in a food rather than declare definitive safety. The conclusion that GMOs are safe for human consumption has been supported in over 100 peer reviewed research studies, and has been endorsed by the American Medical Association and the World Health Organization (5). Despite the clear evidence for safety, there is widespread doubt and concern over GMO consumption. This likely stems from a lack of education and understanding on GMO creation and verification, as the greatest impact on GMO perception is education. One study found that 62% of people in the US with a high school education or less consider GMOs unsafe, compared to only 38% of people with post-graduate degrees believing them unsafe (6).

GMOs have clear benefits. GMO crops have higher yields and their pathogen infection resistance decreases complications with those yields. Despite the impressive body of evidence on the benefits and safety of GMOs, little more than a third of the world supports GMO consumption (7). The most common concern is the unintentional creation of toxins, allergens, or altered nutrition. This fear stems from the idea that foreign genes are being put into an organism. If one does not understand how GMOs are created, the unknown process of putting things from one organism into another starts to look scary. Thus, one of the biggest obstacles against GMO integration into society is not the successful engineering of organisms, but tackling this public resistance, primarily by increasing education and trust in the process. We need to show that our project is not the endeavor of mad scientists, but a safe and controlled procedure that draws from natural processes.

Our team approached this challenge from two angles, in both our inherent project design and educational outreach.

Our engineering approach only manipulates native cyanobacterial genes, meaning we do not introduce any genes not already found in the organism. We are deleting the native gene encoding SBPase, increasing the expression of the native transaldolase and/or FBPase. In cyanobacteria, the SBPase gene is dual functional, also encoding FBPase functions. In order to remove SBPase, we therefore also remove the vital FBPase, thus we must provide a new monofunctional FBPase. This additional gene is well characterized to produce only an FBPase, the reaction of which is normally present in cyanobacteria. Therefore, no reasonable risk of dangerous side reactions or toxic products is predicted.

Modification of gene expression organically occurs through natural selection. For example, a plant may be pressured to start expressing more of a growth gene to grow taller and get more sunlight. We’re simply directing the process to achieve a specific goal. The second branch of our approach lies in education; it is very difficult to fear something once it is understood. Our team believes educational outreach can make major strides in improving public opinion on GMOs. 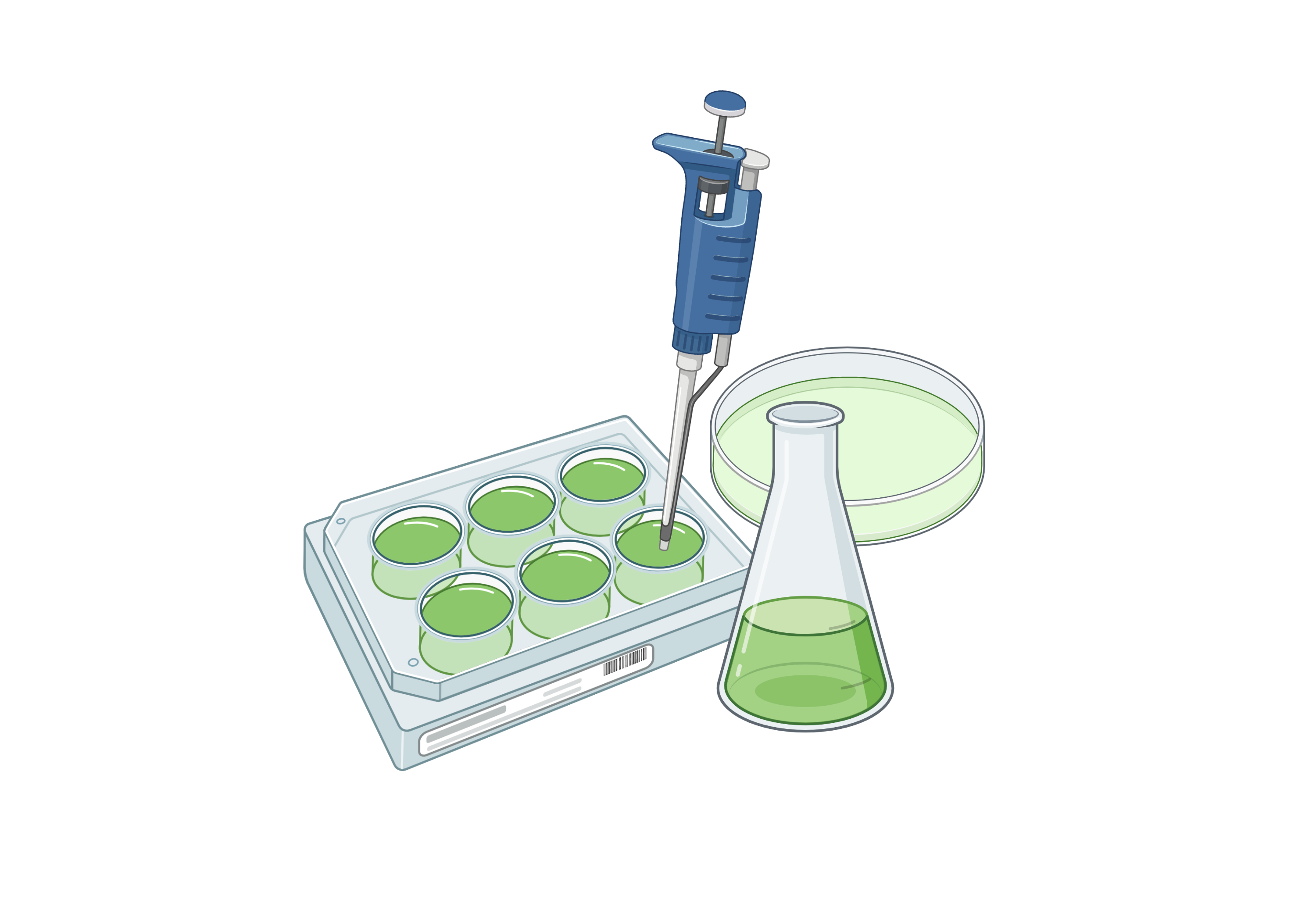 Antibiotic resistance markers are a common method for selecting desired genetically altered cell lines in molecular biology research. Although the use of antibiotic resistance genes greatly increases the ease and efficiency of microbial research, there is the possibility of problematic horizontal gene transfer. Through horizontal gene transfer bacteria can transfer resistance genes to one another and even multiple species throughout their surrounding environment (8). This allows antibiotic genes to transfer to bacterial species or strains that had previously been susceptible to antibiotics.

Our project used gentamicin, kanamycin, and streptomycin-spectinomycin resistance genes to select for cells that incorporated our desired genetic constructs. These antibiotics have current uses in the medical field,[1] but only under extreme and otherwise unmanageable conditions. Our nonpathogenic cyanobacteria do not express antibiotic resistance well. The antibiotics that we used are also less purified and at a lower dose than medical-grade antibiotics. Our concentration of antibiotics is approximately 5 μg/mL for our selection process, whereas medical usage is typically over a dozen times more concentrated. These factors greatly limit the danger of impactful antibiotic resistance within our model organism.

Additionally, a variety of laboratory techniques are designed to limit, or ideally eliminate, the risk of genetically modified organisms escaping the lab environment. Our work areas are consistently sterilized before and after cellular work. Materials in contact with the cells such as gloves, media plates, or pipette tips are autoclaved before disposal. All cell lines, aside from those stored within the lab for future work, are also killed by autoclave sterilization when work is completed.

1. Gentamicin and kanamycin are both injected antibiotics used to combat various types of infections when other medications have not worked (10) (11). Streptomycin is used in combination with other agents to treat active tuberculosis. Spectinomycin is used for treating the sexually transmitted infection gonorrhea caused by Neisseria gonorrhoeae (12).↑

5. Norris, Megan. 2015. Will GMOs Hurt My Body? The Public’s Concerns and How Scientists Have Addressed Them. Science in the News. (https://sitn.hms.harvard.edu/flash/2015/will-gmos-hurt-my-body/) 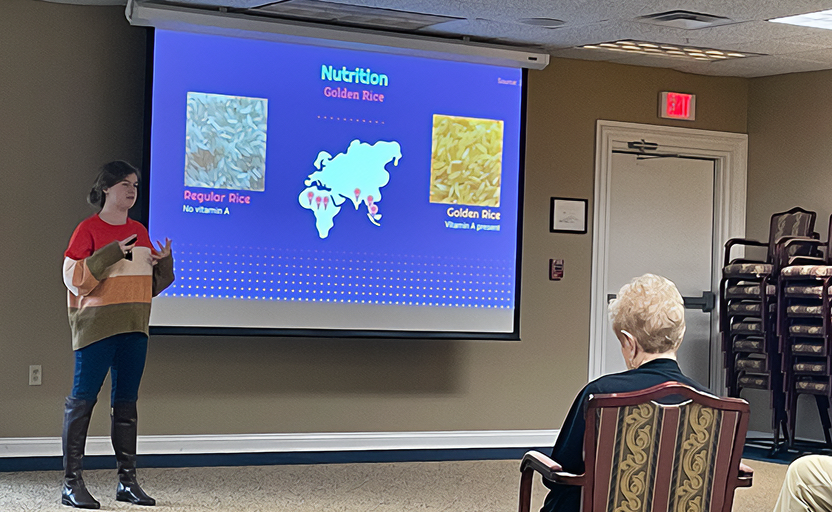 The best way we can show respect to our community is to listen to them. GMOs are a controversial topic, and we do not want to ignore the fears of our community members. Learn more about that here and how we reached out to the community! 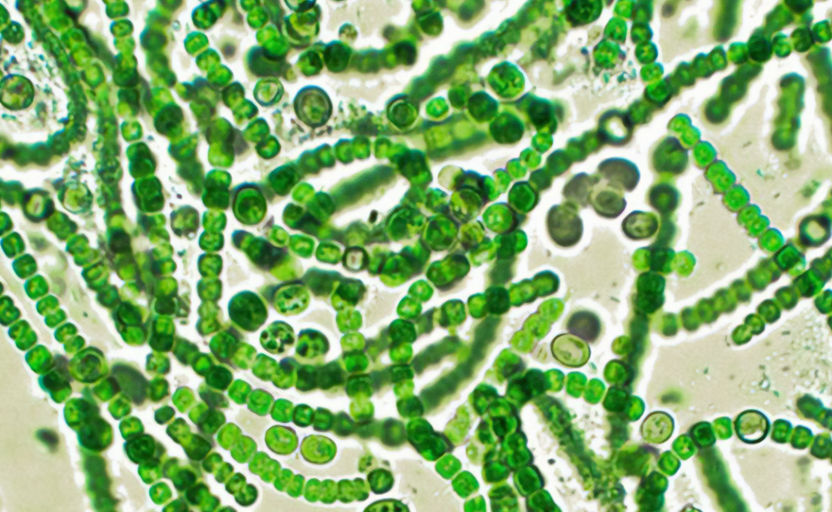 Our team looked into designing different pathways to enhance photosynthesis of crops in order to increase crop yield. Learn more about our designs!