Crop production is not keeping up with the demands of a growing population and as a consequence, large regions of people are left malnourished. In order to prevent a worldwide crisis in the coming decades, we must strengthen our current biological tools in an efficient but responsible manner. Through our project, we have demonstrated that overexpressing key Calvin-Benson-Bassham (CBB) cycle enzymes improves the viability of cyanobacterial cells (Synechococcus elongatus PCC 7942)- a photosynthetic organism. We hope that our research serves as a basis for further optimization in energy and metabolite flux of photosynthesis, and that this technology is used to improve crop production.

After careful primer design, the set of fragments for four different vector constructs were amplified through polymerase chain reaction (PCR).

Assembly of Fragments through Gibson Assembly

The amplified fragments were designed with recognition sites for endonucleases used in Gibson Assembly. We successfully assembled and verified through restriction digest four vector constructs- pGEM-Tal, pGEM-FBPase, pGEM-tal+fbp, and pGEM-SBPase (Figures 1-4). The first three plasmids were built for overexpression of the respective CBB cycle enzymes. The final plasmid listed was designed for knocking out glpX in the S. elongatus PCC7942 genome. 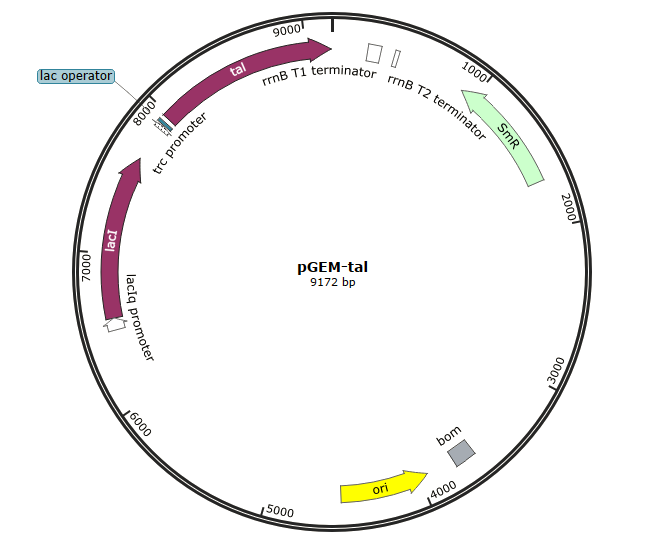 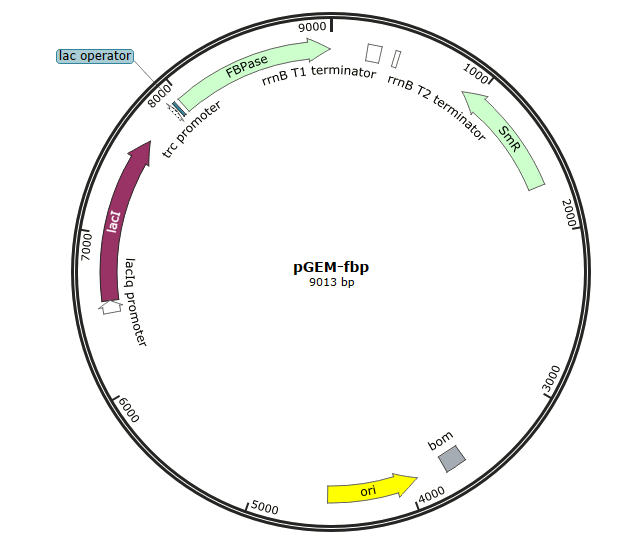 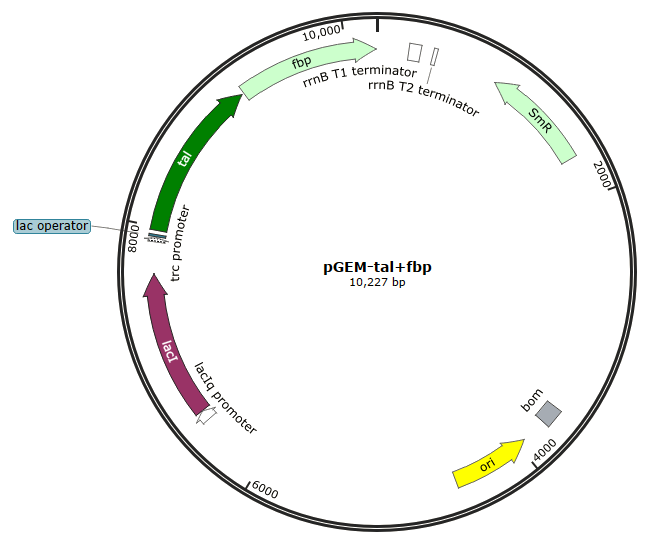 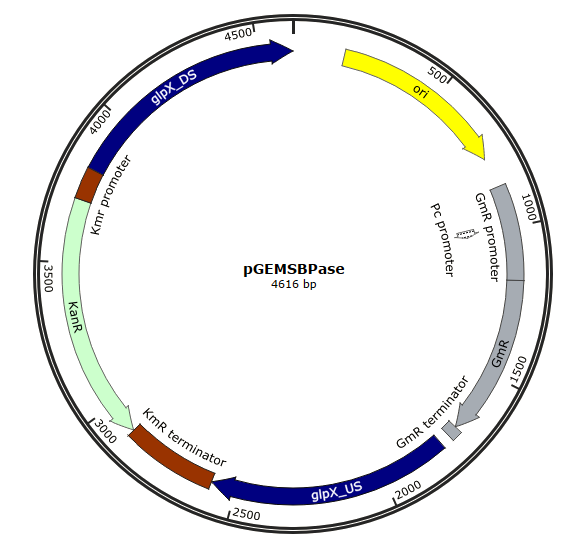 Transformation of E. coli DH10𝛃 and Amplification of Assembled Plasmids

We used chemical transformation of our chassis E. coli DH10𝛃 to amplify our plasmid constructs. These plasmids were purified through miniprep and transformed into our target organism- cyanobacteria S. elongatus PCC 7942.

We followed a cycle sequencing and product purification protocol outlined by the Center for Bioinformatics and Functional Genomics CBFG (1) of Miami University. The nucleotide pellets were turned in for automated sequencing. The results allowed us to verify that the genes and promoters used for overexpression had the expected DNA sequences.

We wanted to confirm that the overexpression plasmids integrated into neutral site I or, for deletion mutants, that the inactivated SBPase gene inserted in place of the native SBPase. We therefore performed PCR amplification of the target insertion sites and looked for our expected band lengths. Just as important was determining the amplicon size resulting from the wildtype genome. S. elongatus PCC 7942 has multiple copies of its genome and we can therefore see the extent of segregation by looking for wild type (WT) amplicons.

We performed growth experiments on our overexpression colonies and the wildtype strain. We grew the cells in liquid cultures under 10 hr light and 14 hour dark cycles for five days. Throughout this period we collected optical density data to monitor growth. 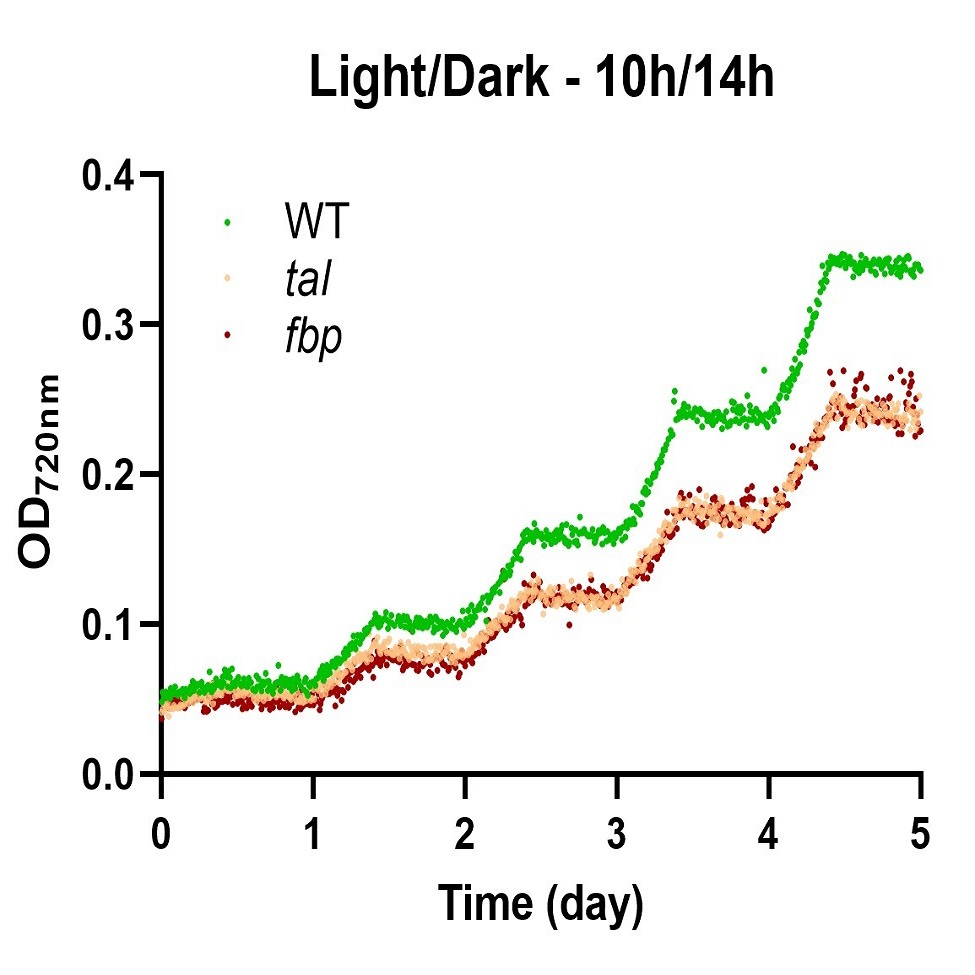 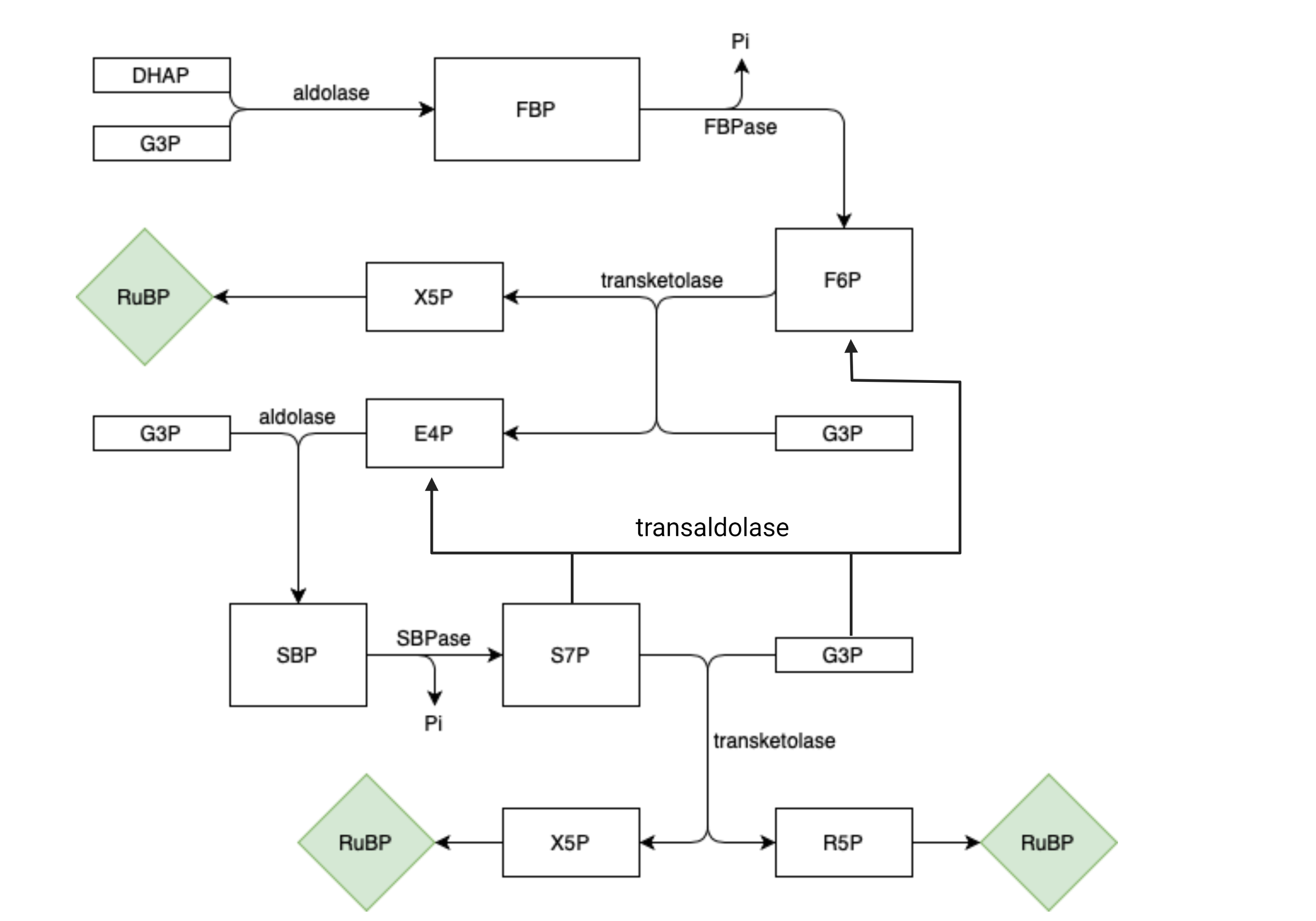 Based on these results, we would expect the double gene overexpression strain (tal-fbp) to show the same phenotype or an additive effect with worse growth. However, instead we observe improved growth compared to both single gene overexpression strains (Figure 7). This finding can be explained by the successful activation of our transaldolase pathway. With an even greater pool of F6P, transaldolase is thermodynamically favored to operate in the reverse as our pathway requires. While the native carbon regeneration pathway is more dependent on triose phosphates (C3), the redesigned transaldolase cycle depends more heavily on the hexose phosphate (C6) pools, which was also confirmed by computational modeling results. The robustness of the carbon regeneration by either the native pathway or the transaldolase pathway would thus depend on the abundance of either C3 or C6 carbon pools. Activation of our pathway might not have been observed in the transaldolase strain (tal) since there are not enough C6 carbon pools available. With greater FBPase activity, however, a larger pool of hexose phosphates particularly in the form of F6P, favors the reverse transaldolase reaction, i.e. converting F6P and E4P to S7P and G3P. This establishes the transaldolase pathway for carbon regeneration. .

This direct competition between SBPase and transaldolase also could explain why cells with our activated pathway do not show growth identical to WT (Figure 8). The transaldolase pathway is actively competing for intermediates with the native SBPase-driven carbon regeneration reactions, leading to a slightly less robust growth in comparison to the WT. Therefore, after deleting the SBPase gene in our overexpression strains (tal-fbp), we expect to see growth that is comparable or even outperforms WT depending on the abundance of phosphate sugars. 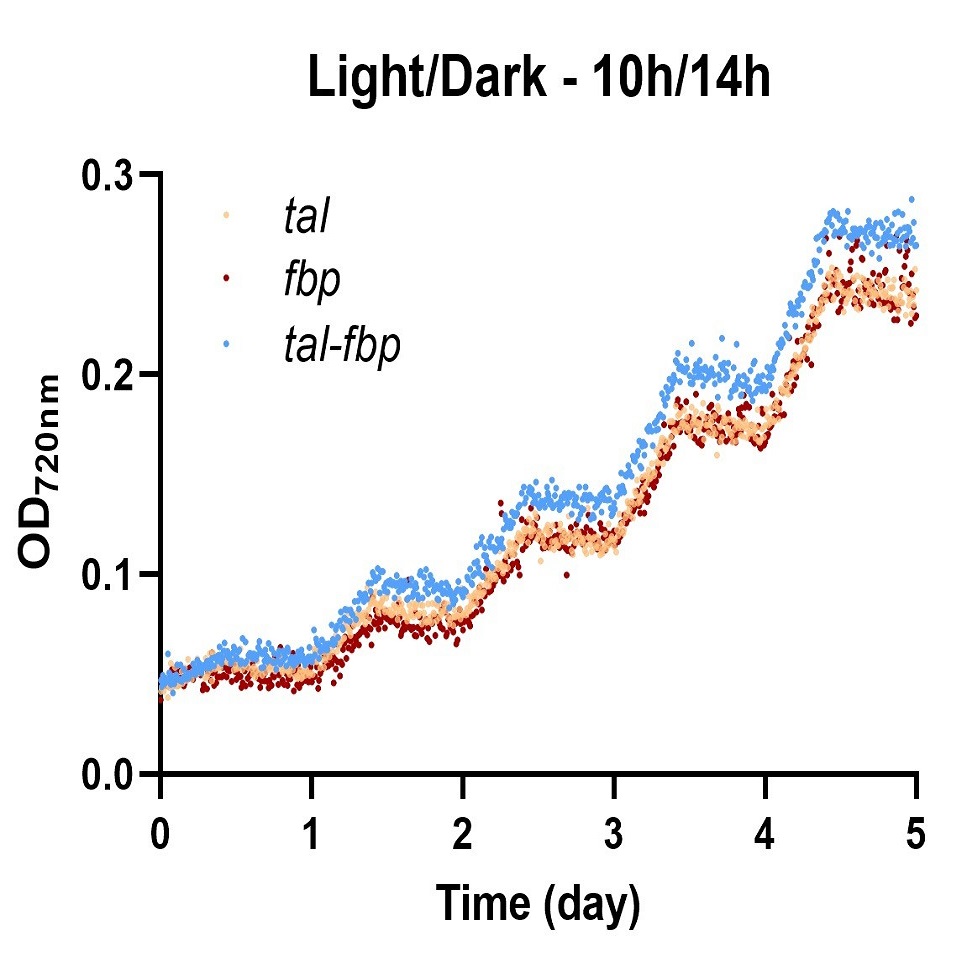 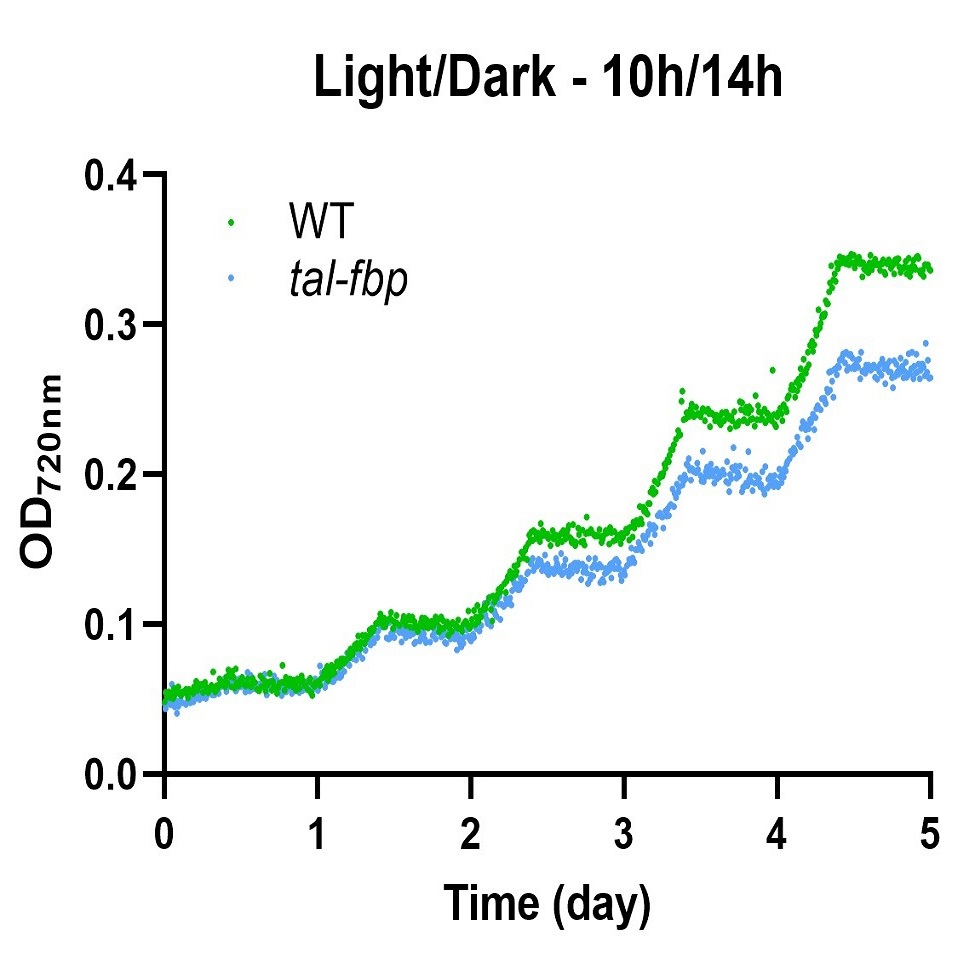 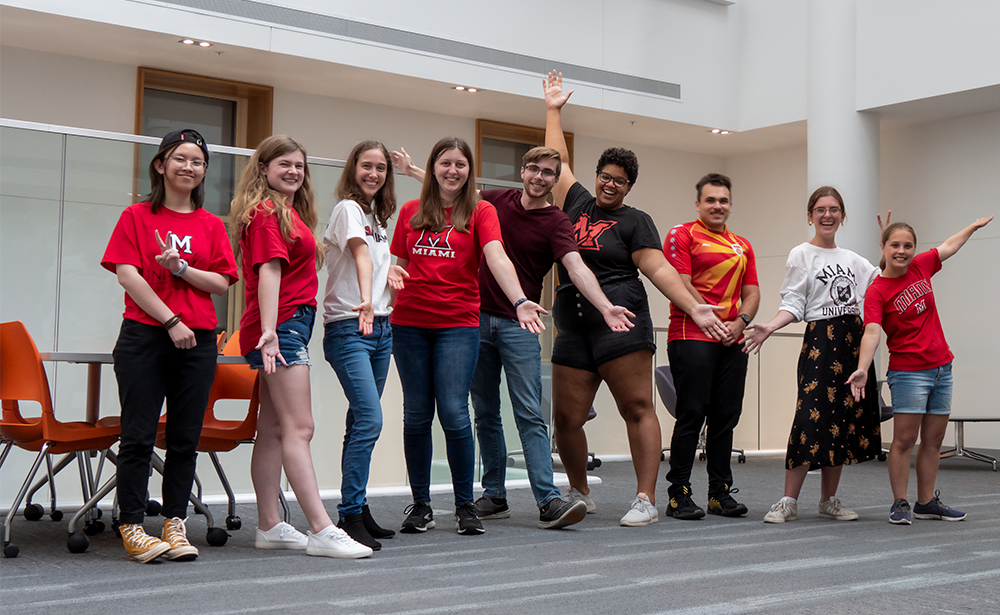 The work done by Miami University's iGEM team was made possible by a team of dedicate and passionate students and advisors from a range of different STEM subject domains! Take a moment to learn more about Miami University's committed team! 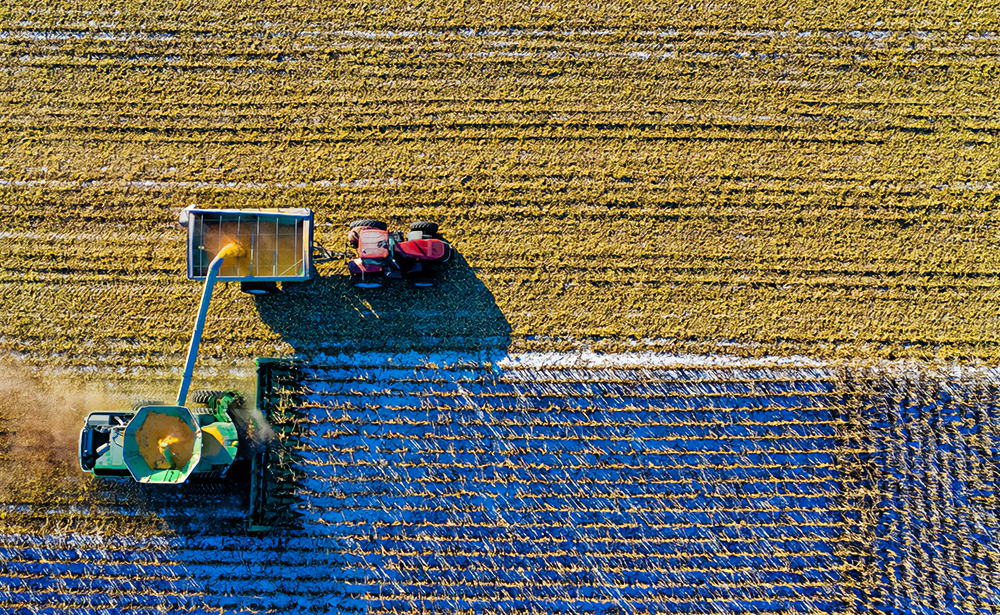 The world depends on high agricultural productivity to provide food and resources to local and global communities. However, global demand for crop production is expected to increase dramatically. Learn how Miami University's CROP could increase the yields of crop plants.