The Bielefeld and Marburg teams initiated the collaborative writing of a handbook for future iGEM teams working with phototrophs. Our team authored the Modeling section of this handbook. This chapter consists of three subchapters. "Using computational models for biological analysis" covers the usage of models in phototrophs, the Constraint-Based Reconstruction and Analysis Toolbox, the difference between Kinetics and Flux based models, and the mathematical justification for flux-balanced model analysis. The second involves "Building a Model," where the reader is walked through how to add reactions and metabolites, create an objective, validate the model, and create boundary reactions. Finally, the last subchapter discusses "Performing the Simulation." This subchapter describes four different types of analyses, data visualization, and integrating regulation into a model.

The full modeling chapter can be found at the following download link:

The full phototroph handbook can be found at the following download link:

Collaboration with the Complutense University of Madrid 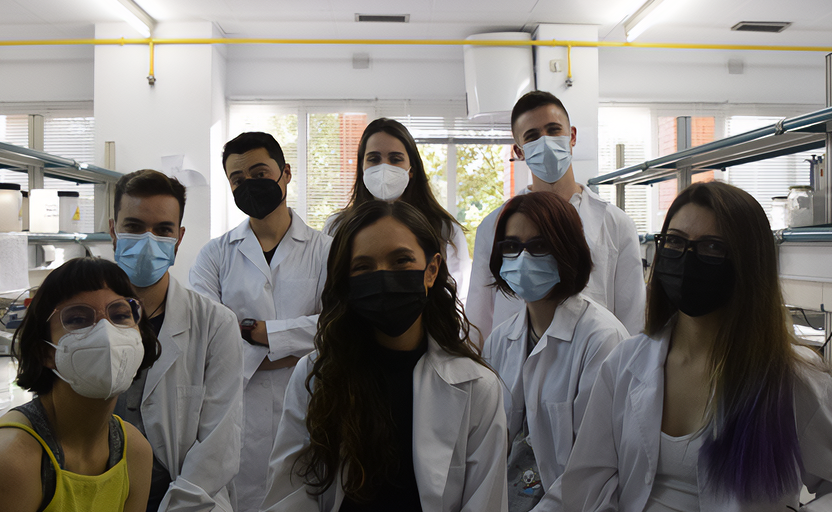 While our team tackled modeling photosynthesis improvements, the iGEM team from the Complutense University of Madrid (Madrid_UCM) addressed biofuel production in their project 4C_Fuels; this team aimed to stimulate n-butanol production in cyanobacteria through synthetic pathways suggested in previously published literature. Similar to the techniques of our team, they planned to use integrative plasmids to introduce a synthetic pathway, changing the metabolism of the host cyanobacteria to suit their engineering goals. To enhance this butanol production, the team also planned to introduce a modified malyl-CoA-glycerate (MCG) carbon fixation pathway; this pathway enhances production of acetyl-CoA to fuel butanol production, but also could impact photosynthetic output. Miami’s iGEM team applied Madrid’s modified pathways to our computational model to assess metabolic flux levels and biomass formation. Scripts can be found at the MiamiOH iGEM Github repository.

The main goal in this collaboration was for Miami’s iGEM team to provide a framework and instructions from which Madrid_UCM could perform their own desired computational analysis. The Miami team therefore provided the created models, basic scripts and analysis, and instructions on how to create more advanced scripts and suggested analyses. This can be more thoroughly seen in the description below which was sent to Madrid_UCM.

A total of 3 models were made. One model (BUT model) only includes the reactions allowing for butanol synthesis while another model (MAL model) only includes the reactions for the phosphoketolase (PK) bypass and MCG carbon fixation pathway. The last model combines all 3 pathways (butanol synthesis, PK bypass, MCG pathway) into one model (BUTMAL model).

First, based on a set of reactions sent to us by the Madrid_UCM team, we created a sheet of all metabolites, reactions, and an appropriate stoichiometric matrix of the appropriate pathways. Importantly, all reactions and metabolites were first checked to not be in the model. Missing reactions or metabolites were then added to the model. Although PCC 7942 has not been shown to perform butanol fermentation, one of its genes shows close homology to tartronate semialdehyde reductase (TRSARyr), which converts 2-hydroxy-3-oxopropanoate to glycerate through an intermediate of tartronate semialdehyde. Importantly, there is no known gene which allows the biosynthesis of 2-hydroxy-3-oxopropanoate, therefore making the possible reaction futile unless the metabolite is externally provided, however the authors of the model clarify that they still include the reaction in the model. The reactions sent by the Madrid_UCM team separated this reaction into two reactions where glyoxylate is used to produce tartronate semialdehyde which is then converted to glycerate. However, due to the inclusion of TRSARyr in the model and the lack of the combined malyl-CoA-glycerate artificial cycle and PK bypass in vivo analysis in our organism, we included reactions that converted glyoxylate to the intermediate of 2-hydroxy-3-oxopropanoate rather than tartonate semialdehyde to produce glycerate. All reactions and metabolites were confirmed according to the KEGG (Kyoto Encyclopedia of Genes and Genomes) Reaction and Metabolites set (1). Ultimately, this change should not impact analysis of the data as the same set of reactions is represented, simply with different intermediates being specified fitting with our organism.

It is important to note that a sink reaction was also added for n-butanol in the BUT and MALBUT models. A sink reaction is a reversible reaction that essentially allows the buildup of an intracellular metabolite. If this were not added, there would be no available reaction to take up n-butanol, and therefore mass conservation would not be able to be maintained. A similar sink reaction for acetyl-CoA was added to the MAL model only for verification of a nonzero flux for all added reactions increasing acetyl-CoA production. For growth and subsequent analysis, this sink reaction was removed.

First, all models must be verified to allow proper growth and to perform their expected functions based on their previously tested legitimacy in vivo. To determine that all added pathways were functional, we bounded the n-butanol and acetyl-CoA production reactions for the BUT and MAL models, respectively, to have nonzero fluxes. Then, biomass production was optimized for all models; a nonzero solved optimized value would indicate a nonzero growth rate and therefore viable cells with active added pathways.

Assessment of Models for Carbon Fixation

First, we assessed biomass production by optimizing the growth rate. Ultimately, with no added reaction constraints, the MAL model maintained an identical maximum growth rate compared to WT, but interestingly also activated the reactions to produce acetyl-CoA from malyl-coA. Therefore, it seems cells could reach the same maximum growth rate using either pathway.

We then assessed the flux of the enzyme which performs carbon fixation, taking inorganic carbon and allowing it to become fixed into the cell as organic carbon. The Rubisco flux for the MAL model was 492 mmol/mgDW/hr, but all added reactions maintained fluxes of 0. In fact, when the fluxes of the reaction converting malyl-coA to acetyl-CoA or the reaction producing acetyl-CoA from acetyl-phosphate were separately bound to nonzero fluxes (lower bound of 0.3), although growth optimization was maintained, Rubisco flux decreased to 490 mmol/mgDW/hr. Therefore, these pathways may actually inhibit optimization of direct carbon fixation.

Based on these preliminary results, it seems that the phosphoketolase (PK) bypass and MCG carbon fixation pathway do not allow increased biomass production and instead might actually hinder direct carbon fixation.

Assessment of Models for Butanol Production

Next, we wanted to assess if the combined pathways allowed higher butanol production in two methods, both using OptKnock and not.

If we were to optimize the model to solve for the highest possible flux of butanol production, this found solution may not reflect a solution feasible for cellular growth. Media sources can vary to support microbes facing deficiencies, therefore simulating growth using growth scripts can become a guessing game. Ideally, one would simultaneously optimize biomass growth as well as the synthesis of our target metabolite. Therefore, we can use OptKnock; this allows FBA to solve for the optimal flux distribution that simultaneously optimizes two objective functions, biomass growth as well as the formation of n-butanol.

If wanting to avoid the use of this program, one could also perform flux variability analysis on models regarding the reactions producing the metabolites of interest. Briefly, flux variability analysis involves finding the possible ranges of selected reactions given a certain percentage of optimized solution is maintained. We compared the possible flux ranges of the reactions producing acetyl-CoA, malyl-CoA, and butanol, assuming 0.1% of maximum biomass production is maintained for each model. Notably, since each model showed different optimized growth rates, one should address this to match the appropriate standard value for growth. The maximum flux of the reaction should indicate the highest possible level of production given maintained growth for each model. 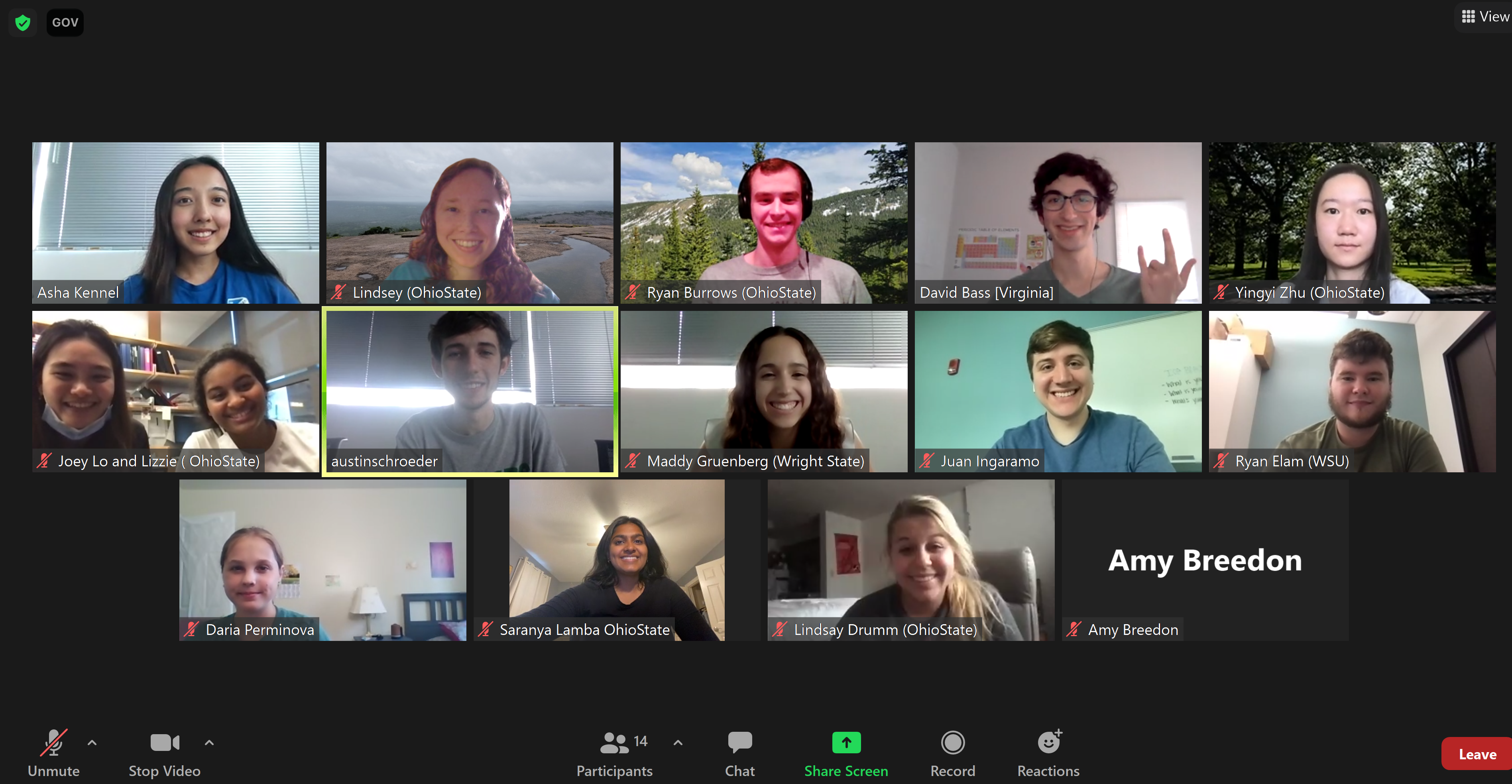 A Zoom call screen grab from the Wright State symposium. Taken by The Ohio State Team The Wright State University iGEM team (WrightState) hosted a virtual 2021 Science Symposium on August 12th, which was attended by iGEM teams from the host team, The Ohio State University (OhioState), University of Virginia (Virginia), and Miami University. Each team gave a short presentation on their project. This event provided an opportunity for engagement as well as collaboration by allowing team members to ask questions and give advice on navigating the challenges of an iGEM project. The veteran teams gave excellent advice on time management, organization of wiki content creation, and adapting supply delays and lab limitations due to the COVID-19 pandemic. The event was an excellent opportunity to learn about other projects and make connections with other iGEM teams, especially with the COVID-19 pandemic limiting opportunities for in-person interaction. 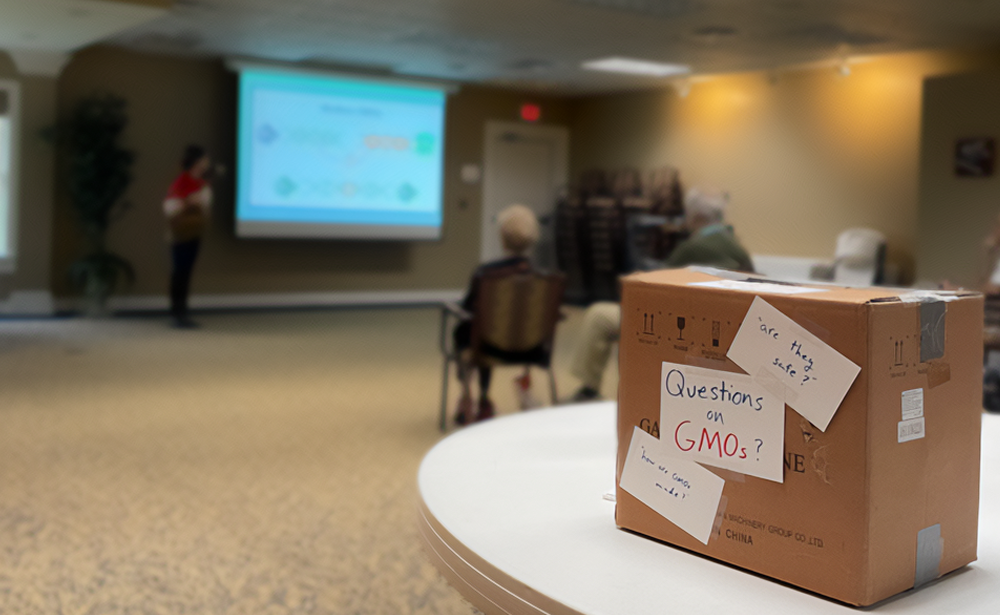 Not only did the Miami University iGEM team work to make a phenomenal project, we also spent an exceptional amount of time teaching others about plant synthetic biology! Take a moment to learn more about that on our education page!

We wanted to share our project with others and have an open discussion. Learn how we shared with other communities and what we learned!