We have devised a model that allows frogs to effectively respond to B.dendrobatidis by allowing the design E.coli to produce Violacein when frogs are exposed to B.dendrobatidis in normal life. Therefore, we selected the presence of light and the IPTG emitted after detecting the chitin of fungi as input to output that produces violacein. In order to model to produce violacein when both of these conditions are satisfied, the light induction model produces violacein A and the IPTG induction model produces violacein B,E, so that complete violacein is formed only when both conditions are satisfied. Through the two modeling, we checked how effectively the violacein A, B, and E can be produced under each condition.

The first figure shows the repressing violacein A when blue light is absent or weak.

the second figure shows the production of violacein A when exposed to blue light.

The key point is that YF1 constitutes dimer, and YF1 monomer has D-form and L-form, respectively. Since L-form is formed when exposed to light, the intensity, I value, was reflected. In addition, it is only when dimer is DD form that FixJ can be phosphorylated.
Our model was developed upon the model created by IISER-Pune-India's project in 2019.
The ODEs for light induction violacein model is as below: 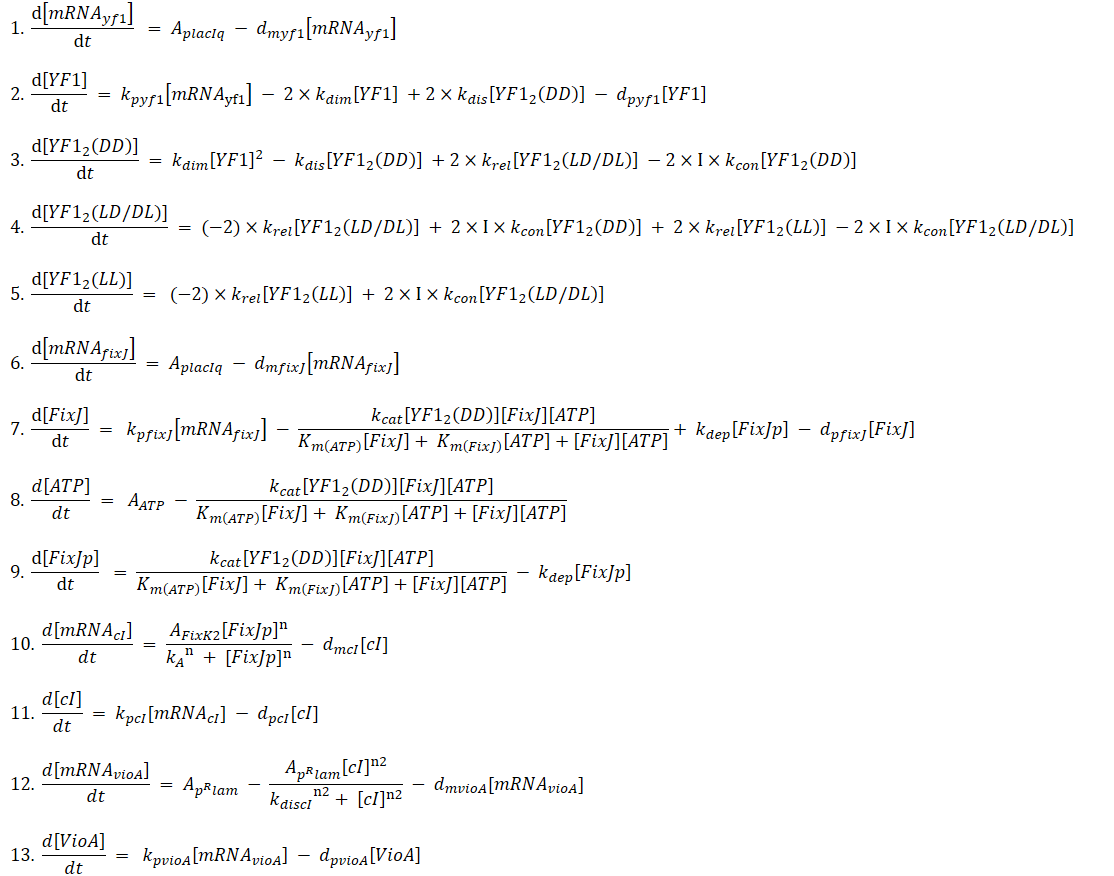 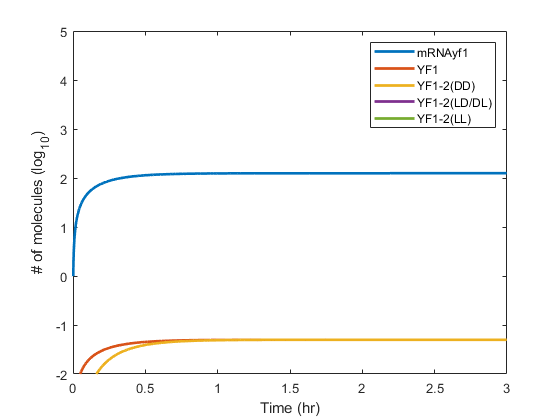 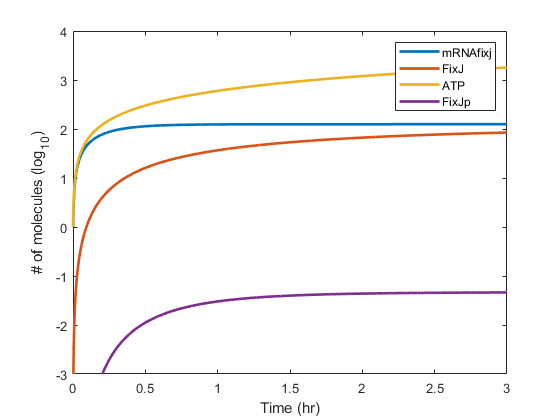 When I=0, as we expected, YF1 dimer formed a DD form capable of phosphorylation of FixJ, and FixJ convert to FixJp. 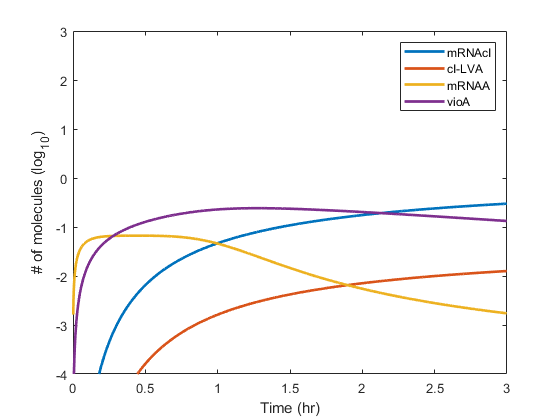 If we look at the violacein A production graph, we can see that cI repressors takes some time to act as repressors of the pRlam promoter, so it initially produces some violacein A and eventually decreases. 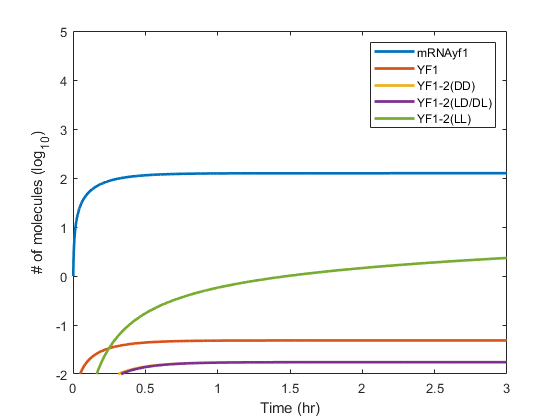 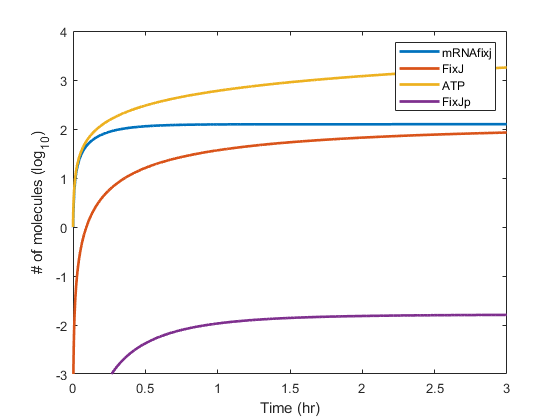 When I=1, since YF1 dimer slightly forms DD form, FixJ is phsophorylated less than when I=0. 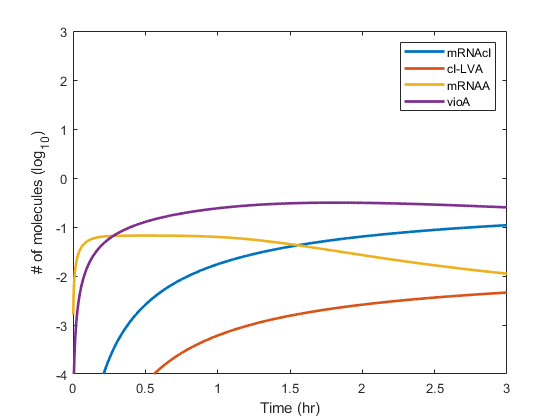 If you look at the violacein A production graph, it is similar to the situation when I=0. 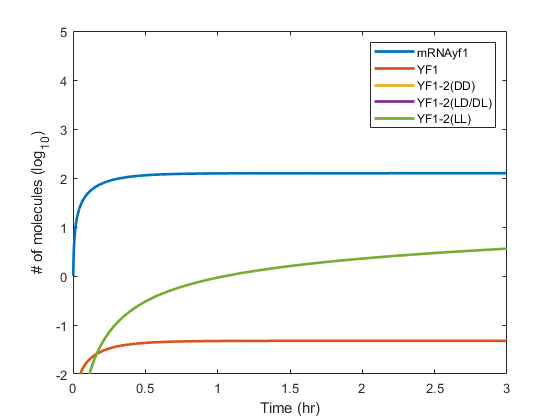 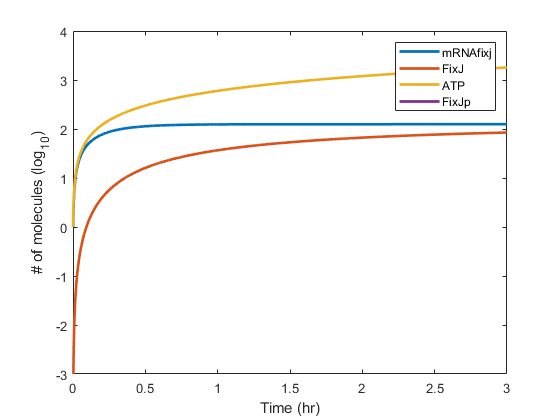 When I=100, since the YF1 forms the L-form, the phosphorylation of FixJ is no longer progressed, and thus the production of cI repressors is repressed. 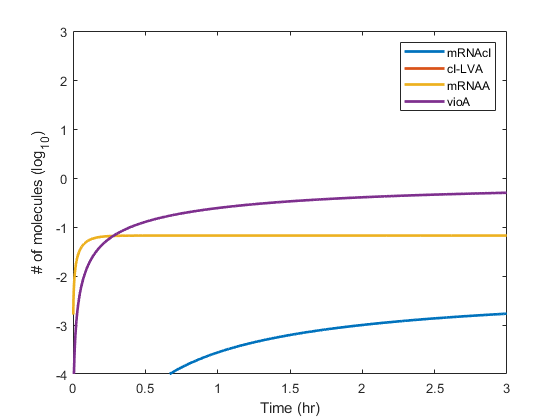 There is a large difference in the production of volacein A over time compared to I=0, I=1. When I=100, the production of violacein A proceeds normally.
In genral considering 1), 2), and 3), it can be seen that the light induction model we designed produces Violacein A more effectively than when blue light is present.

We chose to detect chitin, which is mainly present in the fungi cell structure, to detect fungi specifically. This detection of chitin assumes that E.coli produce IPTG in the chitin detedction system mentioned in design and is designed to produce violacein B,E when fungi is detected by controlling the expression of violacein B,E according to the concentration of the IPTG.

This figure schematically shows the production of violacein B,E according to IPTG.

The main difference between complexity and simplification is whether the binding between LacOp promoter and LacI was directly used in the ODEs. In addition, simulation reflected the binding of LacI and IPTG into dimers by applying hill coefficient while introducing hill function in equation 5 and 7 after assuming that the combination of LacI and IPTG is monomers. In contrast, complexity considered the combination of IPTG-LacI as a dimer along with the diffusion of IPTG.
Our model was developed upon the model created by Imperial College London’s project in 2009 and the article "Comparison of Deterministic and Stochastic Models of the lac Operon Genetic Network"
The ODEs for IPTG induction model is as below: 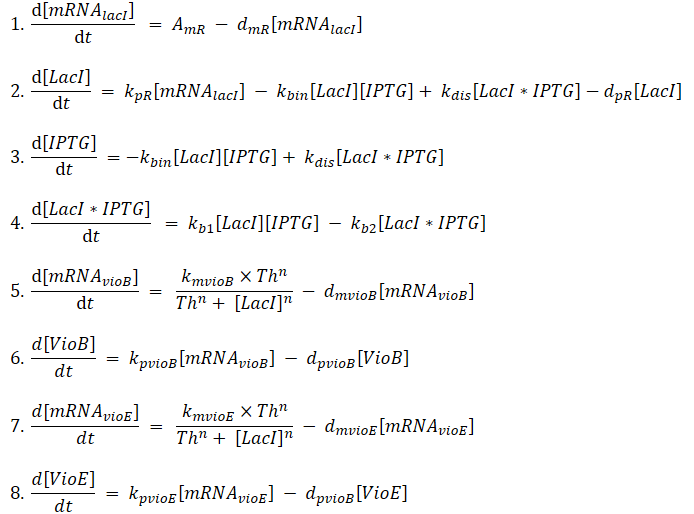 Complexity did not show significant results. As the concentration of IPTG increases, the production of violacein B and E should also increase, but the concentration of violacein B and E showed constant values. We thought that the cause of these results was the application of many factors to modeling, and devised a simplification model to simplify. 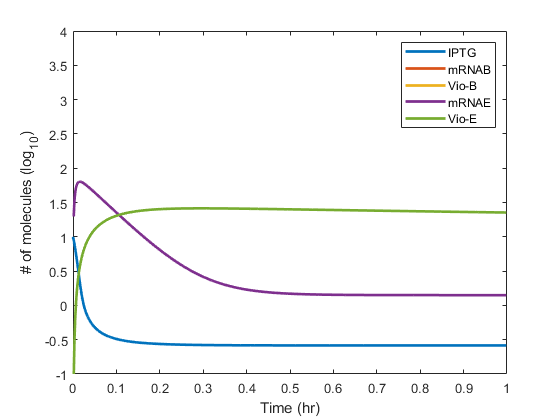 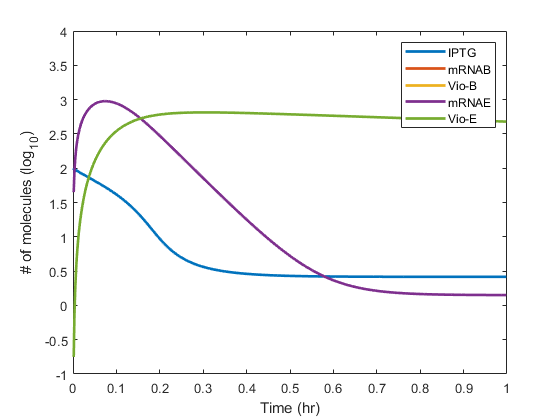 Unlike Complexity, as the concentration of IPTG increases, the production of violacein B,E increases.

image Above is a diagram of our quorum sensing Kill switch. The system is intended to produce the toxin MazF when a cell detaches from the colony and does not recieve enough LuxR/HSL dimers.

In order to know understand the amount of protein(cI repressor) produced by the lux promoter at each transcription factor (HSL/LuxR dimers) levels, we used the Hill equation to plot the graph. For more information about the derivation of the Hill function, see Contributions.

The Matlab code is as below

The result is as below 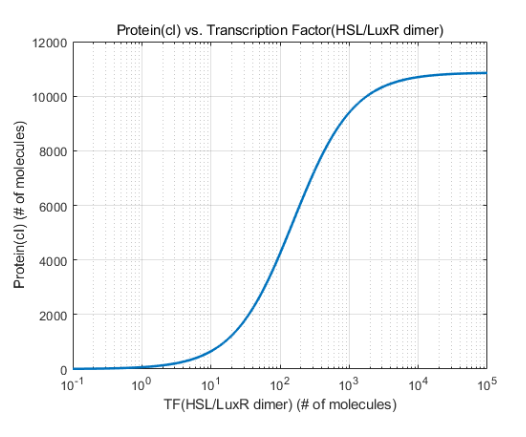 The graph tells us that transcription factors(HSL/LuxR dimer) should be in the range of 10~10^4 molecules, and that half the maximum induction is achieved around 100 molecules.

Our initial design of the kill switch comprised of the J23100 promoters and B0034 RBS constitutively expressing both LuxI and LuxR. However, we were not sure if or design would achieve the proper induction at high densities. So, we created ODE models to evaluate the performance of constructs containing different combinations of promoters and RBSs. We created a single cell model to account for cells that have fallen off of the colony and a high density model for cells with in a colony. Constructs with low HSL/LuxR dimers in the single cell model and high HSL/LuxR dimers in the high density model would be chosen as our improved design. First, when a single cell remains free in the environment, it would be reasonable to consider the external HSL as 0. Internal HSL concentration would be always higher than external HSL, so no HSL would return back into the cell. Thus, in this single cell model, external HSL concentration is fixed to 0.

Our model was developed upon the model created by UPV Valencia's project in 2018 (1). The ODEs for the single cell model is as below:

Model Single Cell The code is as below: 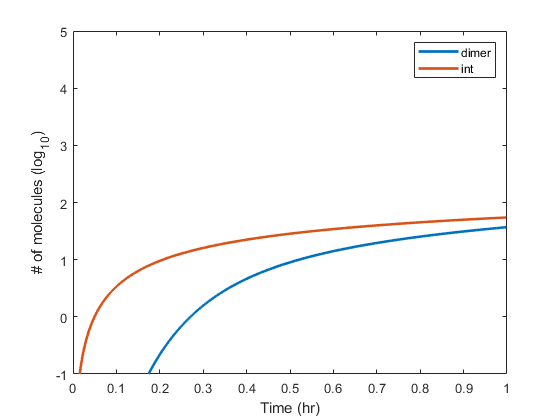 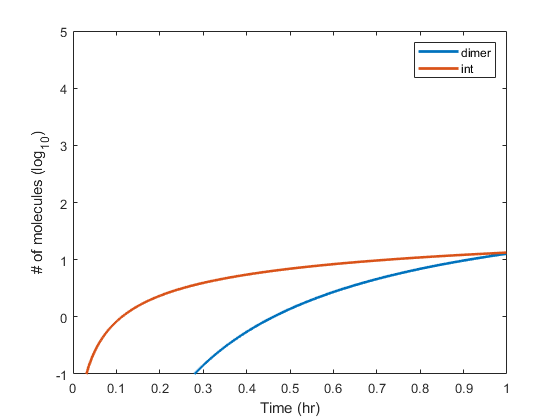 When cells are in high density, it would be fairly reasonable to imagine a region homogenous in HSL concentration. So in the high density model, we considered a nL of closed volume. When cells produce HSL, it will start to accumulate and at some point, HSL will flow back into the cell. The ODEs used in the model is as below.

Using the ODEs above, we plotted 5 graphs, each corresponding to 1 ~ 10^5 cells/nL, for each constructs. The file below contains the Matlab models used for our modeling.

The results are in the word file below.

Among the different constructs, the only construct with promising modeling results was the construct with J23106 B0032 which showed around 10^1.5 dimers in at 1cell/nL and 10^2.7 dimers at 10^5cells/nL. 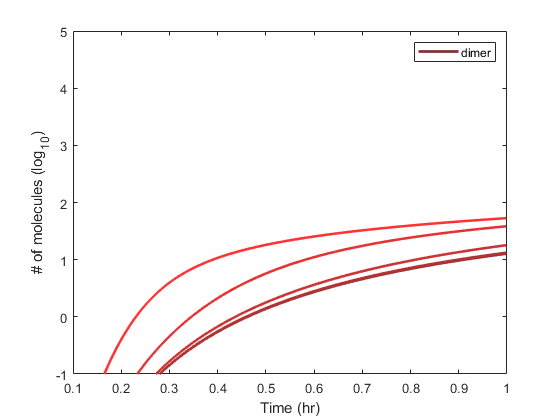 The graph above shows the internal(int) and external(ext) HSL in molecules.

The graph above shows the number of HSL/LuxR dimers over an hour. 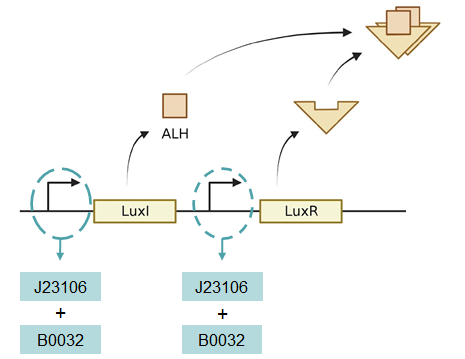 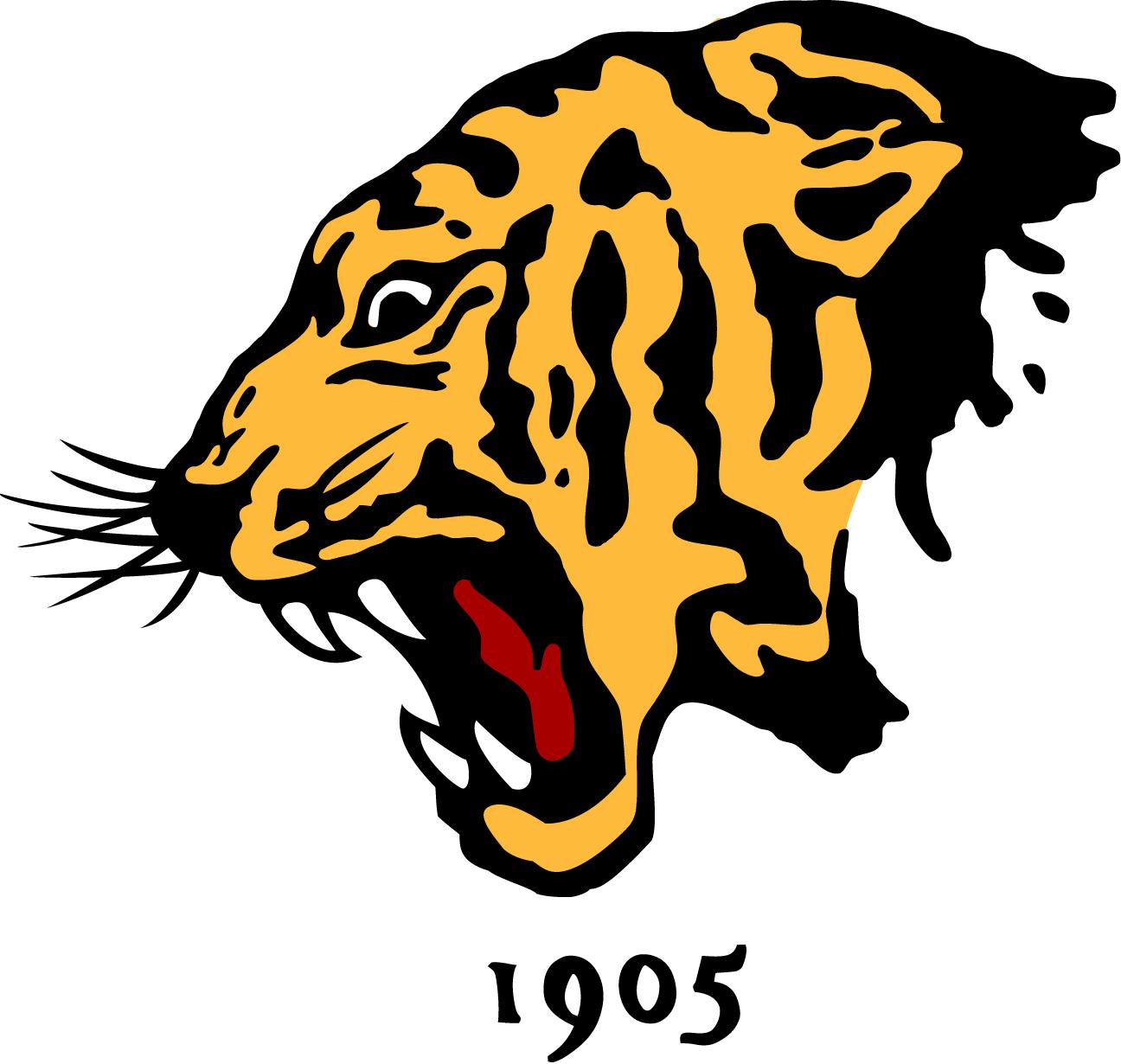 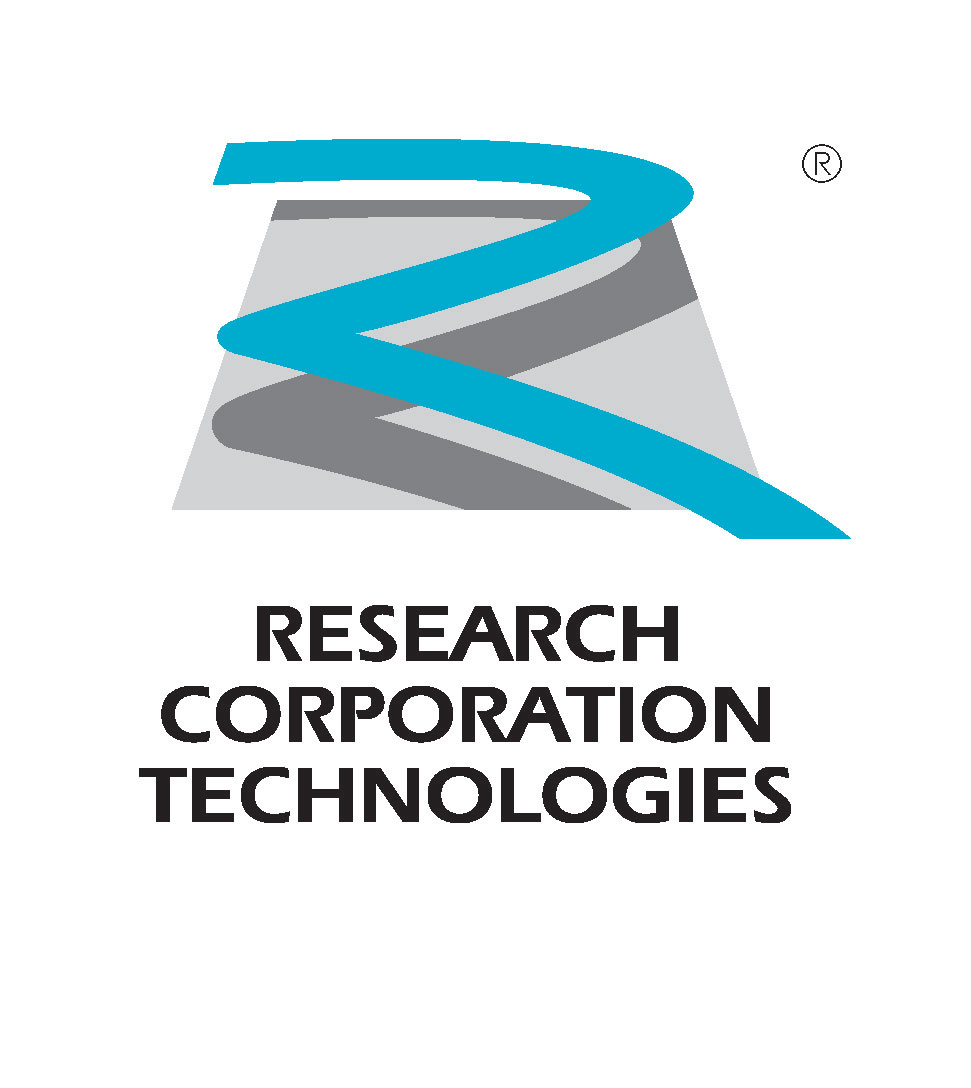