In our project, we used MaFMO coding part BBa_K1131000. MaFMO is flavin-containing monooxygenase from Methylophaga aminisulfidivorans, which could produce indigo dye in E.coli. In our project, we used MaFMO as part of the tyrian purple ( 6,6'-dibromoindigo, 6BrIG) metabolic pathway. During the production from Trp to 6BrIG, the MaFMO enzyme oxidizes 6Br-Indole to 6,6-dibromoindigo.

We designed MaFMO to be expressed under the control of T7-LacO inducible promoters（Fig.2). The sequence of MaFMO was obtained by cloning from iGEM kit using PCR (Fig.3), and we constructed the gene into pET28b plasmid initiated with IPTG induction.

The constructed plasmid was transformed to E. coli BL21(DE3) for protein expression as the following protocols：
1. Single colony was inoculated into LB medium, and cultivated vernight at 37° as seed culture.
2. The seed culture was inoculated into LB medium as 1:100, and IPTG were added at 0h respectively. The concentration of IPTG was 0, 0.1, 1, 5mM.
3. The mixtures above were incubated in different temperatures (18℃，30℃，37℃） for MaFMO expression.
4. The cells were collected by centrifugation at 4000g for 10min and resuspended in lysis buffer after 20 h induction.
5. The cell soup was disrupted by ultrasonication in ice-chilled water.
6. The soluble fractions were collected by centrifugation of the cells lysate at 10000g for 30min.
7. The soluble fraction of lysates were loaded for SDS-PAGE detection.

The following image (Fig.4) shows the results obtained from the SDS-PAGE. From the results, we can clearly observe the MaFMO protein band (the position indicated by the arrow, about 53.1 kDa). The uninduced controls (0mM) without IPTG were expected not to show bands if the promoter lacked leakiness; however, a faint band can be seen for all controls. 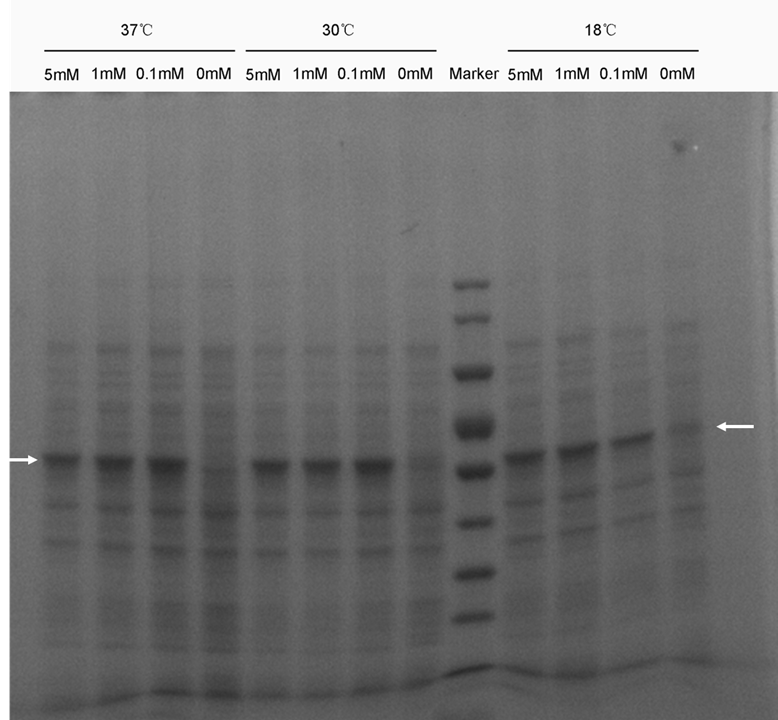 After induction, we performed the 6Br-Indole reaction to synthesize 6BrIG.
We mixed the induced TnaA-MaFMO E. coli into NPB (50mM pH=8.0) buffer after centrifugation, added glucose to 0.6% (ω/V) resuspended until the OD600=2.0 of the solution, added 6Br-Indole to a concentration of 1mM in the solution, and shaken the bacteria at 30℃, 200rpm for 6h. The final 6BrIG production was obtained. solution 1. (For details of the experimental Protocol, see the protocol page.)

From the figure, it can be found that the solution after the reaction has a distinct purple color compared to the unreacted E. coli solution.

In addition to this, after reviewing the data, we obtained the enzymatic activity reaction constants for MaFMO2.
Km=90±14 μM
kcat=0.7±0.03s-1
At the same time, through literature review we also designed an experiment to determine the enzymatic activity of MaFMO, by using NADPH, 6Br-Indole as substrate for the protocol of the reaction.(For the specific protocol, please refer to the protocol content on our webpage)