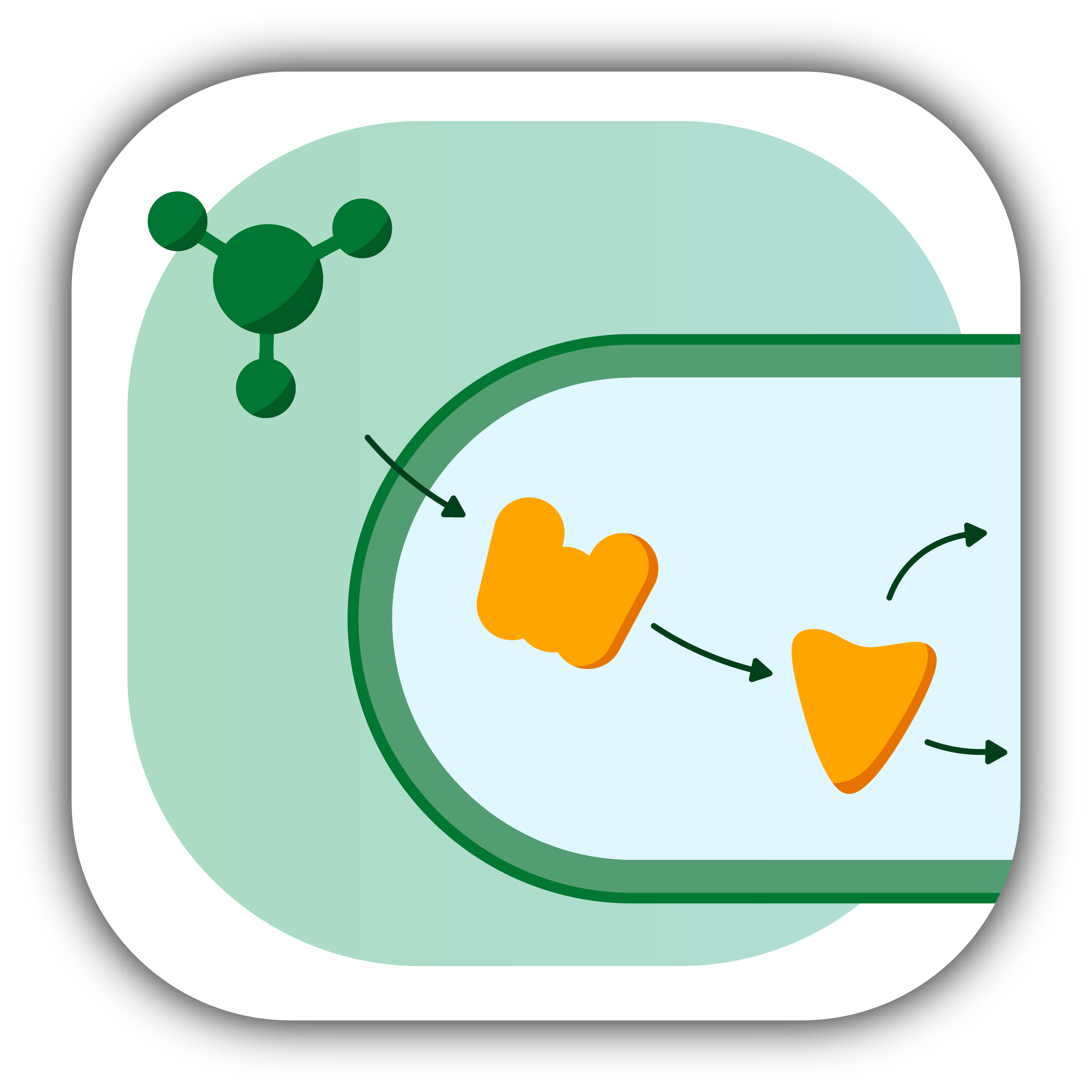 To remove ammonia from cattle stall emissions, we needed a bacterium that could convert ammonia to dinitrogen. In nature, this conversion is carried out by the nitrification and denitrification pathways. However, organisms naturally performing these processes are not adapted to the artificial conditions of our biofilter, so we aimed to create a synthetic “ammoniatroph” that can carry out this conversion optimally. To achieve synthetic nitrification, the chassis organism Pseudomonas putida KT2440 was provided with the nitrification genes from the autotrophic nitrifying bacterium Nitrosomonas europaea. Toxicity tests were conducted using the nitrification intermediate and end-products hydroxylamine, nitrite, and nitrate, to support the performance analysis of the synthetically nitrifying bacterium. The lab strain P. putida EM42, a derivative of P. putida KT2440, was successfully engineered with harmonized gene sequences encoding for the ammonia monooxygenase and hydroxylamine oxidoreductase enzymes, and cytochromes c554 and c552 or cycX. While nitrite and nitrate had little to no effect at physiologically relevant concentrations, hydroxylamine was found to inhibit growth of P. putida EM42 at 0.25 mM, indicating that hydroxylamine will likely become the bottleneck for our metabolic engineering efforts. Due to several factors, we did not manage to analyze the final nitrifying activity of our triple transformant, but the data generated in this study will pave the road to future attempts in assessing the ability of synthetic nitrifying P. putida KT2440 strains.

The Cattlelyst solution requires the removal of both methane and ammonia from cattle stall emissions. To achieve this, we required a methanotroph that metabolizes methane to carbon dioxide and biomass, and an “ammoniatroph” that converts ammonia to dinitrogen gas. In nature, ammonia is converted to nitrite or nitrate by nitrifying bacteria, which is then converted to dinitrogen by denitrifying bacteria. Bacteria capable of simultaneous heterotrophic nitrification and aerobic denitrification (HNAD) have recently been described [1], [2]. However, due to the artificial conditions of the Cattlelyst biofilter, these bacteria are unlikely to perform optimally in our system. We therefore aimed to develop a synthetic nitrifying and denitrifying bacterium by engineering our chassis strain Pseudomonas putida KT2440 with the enzymes necessary for this pathway. Visit this page to read why we chose Pseudomonas putida KT2440 and EM42.

The genes enabling nitrification in HNAD bacteria have not been identified yet [3]. Therefore, genes from the autotrophic nitrifying bacterium Nitrosomonas europaea ATCC 19718 were used instead (Figure 1). This organism expresses ammonia monooxygenase (AMO) to catalyze the reaction of ammonia to hydroxylamine, which is subsequently converted to nitric oxide, nitrite, and/or nitrate by hydroxylamine oxidoreductase (HAO) [4]. The latter conversion yields four electrons which are transferred to cytochrome c554. These electrons are passed on to cytochrome c552 or cycX, which then give two electrons to AMO and two electrons to ubiquinone, the terminal electron acceptor [5]. To establish synthetic nitrification in P. putida KT2440, we aimed to heterologously express AMO, HAO, and the cytochromes c554 and c552 or cycX.

To achieve the heterologous expression of the nitrification genes of N. europaea ATCC 19718 in P. putida KT2440, the genes were split over three separate plasmids to allow for a modular analysis of the two-step conversion. On the AMO plasmid (pAMO), amoC, amoA, and amoB were placed under the control of the inducible rhamnose promoter in a pSEVA25 backbone. Similarly, the HAO plasmid (pHAO) contained haoA and haoB under the control of the inducible Pm promoter in a pSEVA43 backbone [6]. Regarding the cytochromes, there appears to be some ambiguity concerning the nomenclature and nature of the protein that shuttles electrons from cytochrome c554 to AMO and ubiquinone. In this work, cytochrome c552 refers to the 81 amino acid monoheme protein, and cycX refers to the 233 amino acid tetraheme protein. Two cytochrome plasmids were generated, each carrying cytochrome c554 and either cytochrome c552 or cycX initially placed under the control of the strong constitutive J23100 promoter using a pSEVA64 backbone. Multiple attempts at constructing these plasmids resulted in one or more mutations in the genes and/or promoter sequence, suggesting that either transcription or translation of these genes had negative fitness effects that were selected against. To solve this problem, the cytochrome genes were placed under the control of the titratable 3-methylbenzoate-inducible Pm promoter.

All genes were preceded by the ribosome binding sequence described by biobrick BBa_B0034. The gene sequences used in this project were based on biobrick BBa_K1067005, except for cytochrome c552. Gene sequences were codon harmonized for P. putida KT2440 and synthesized by IDT (Iowa, USA). In instances where this was not possible due to sequence complexity, sequences were codon harmonized and then “IDT-optimized” according to the algorithm provided by IDT. The three plasmids were constructed using Gibson Assembly, and transformed into E. coli DH5a or DH10b, in the case of pAMO. Thereafter, the inserts were sequenced and transferred to P. putida EM42, the “streamlined” lab strain that was used in our experiments as a model for our chassis P. putida KT2440.

In parallel, toxicity tests were performed by growing P. putida EM42 in the presence of hydroxylamine, nitrite, or nitrate, the intermediate and end-products of the nitrification pathway. If one of the compounds would exert toxic effects on P. putida EM42, this could affect its ability to nitrify. These toxicity tests were intended to provide supportive information to help shape the experimental design for testing the AMO and HAO enzymes.

P. putida EM42 was successfully transformed with all three plasmids containing the genes for AMO, HAO, and cytochromes c554 and c552 or cycX, resulting in the strains P. putida EM42 NC2 and EM42 NCX, respectively. In the cloning vectors E. coli DH5a and DH10b, sequencing results showed that the plasmid inserts matched the sequences of the construct designs. The P. putida EM42 strains were confirmed to contain all three plasmids by colony polymerase chain reaction (PCR) (Figure 2). 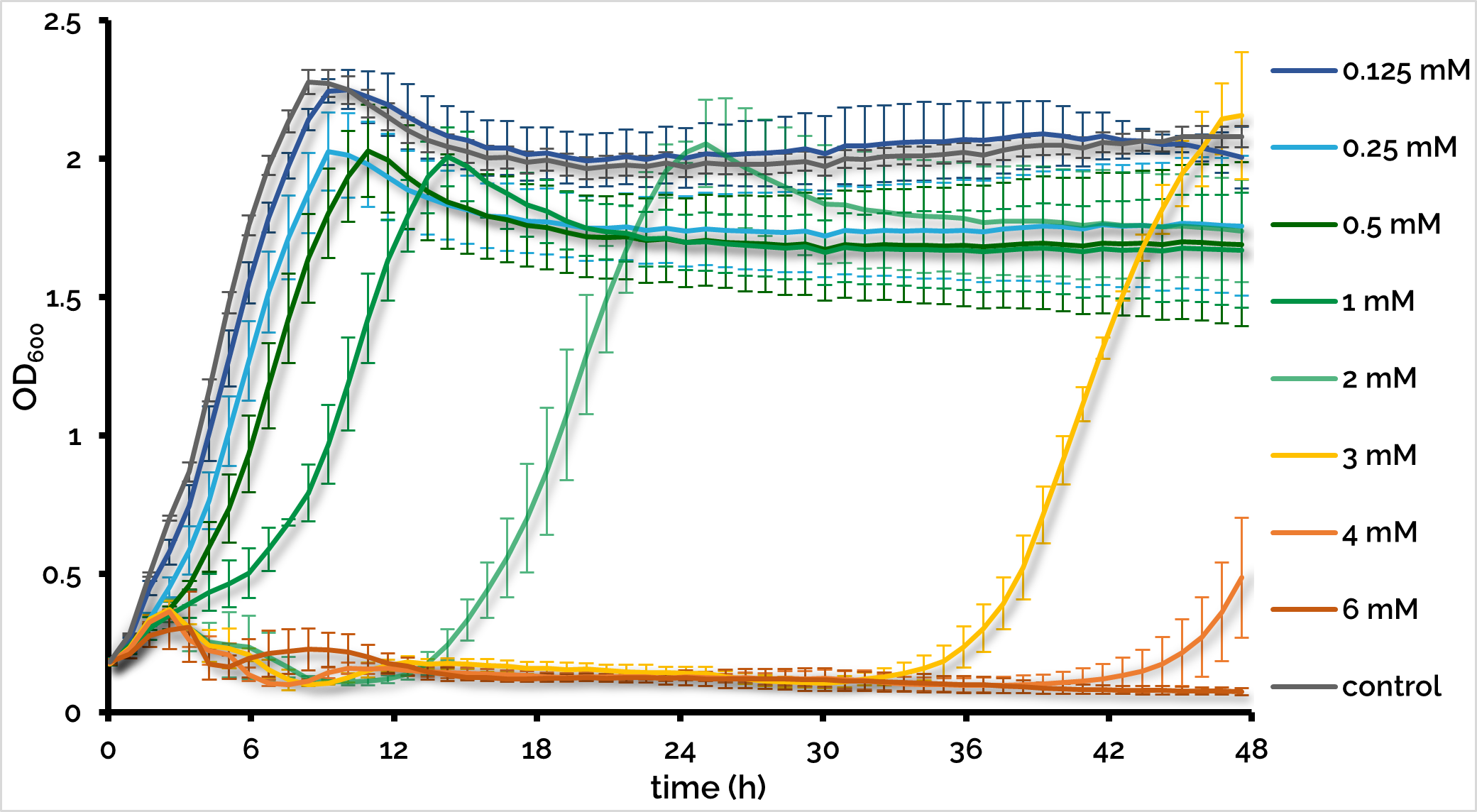 Figure 3:Hydroxylamine toxicity test. The growth of Pseudomonas putida EM42 was measured over a period of 48 h. Data represents the average of three technical replicates.

To investigate the nature of this growth behavior, P. putida EM42 was grown on medium containing 3 mM hydroxylamine that had been pre-incubated at 30 °C for 48 h. Strikingly, no lag phase was observed, and growth closely resembled the growth of P. putida EM42 under conditions without hydroxylamine (Figure 4). These results indicate that hydroxylamine disappears from the medium by mechanisms unrelated to this bacterium. It should also be noted that freshly prepared medium containing hydroxylamine was incubated for approximately 1 h at room temperature. This effect might have been especially significant for the lower concentrations tested, as the proportional loss of hydroxylamine would be highest in these instances. In reality, P. putida EM42 growth may be impacted more severely at lower concentrations than reflected in the results shown in Figure 3. The toxicity test indicates that the accumulation of hydroxylamine in P. putida EM42 NC2 or -NCX will negatively impact its growth and thus indirectly its ability to nitrify. Further attention will have to be given to fine-tuning the metabolism of hydroxylamine to prevent its accumulation. 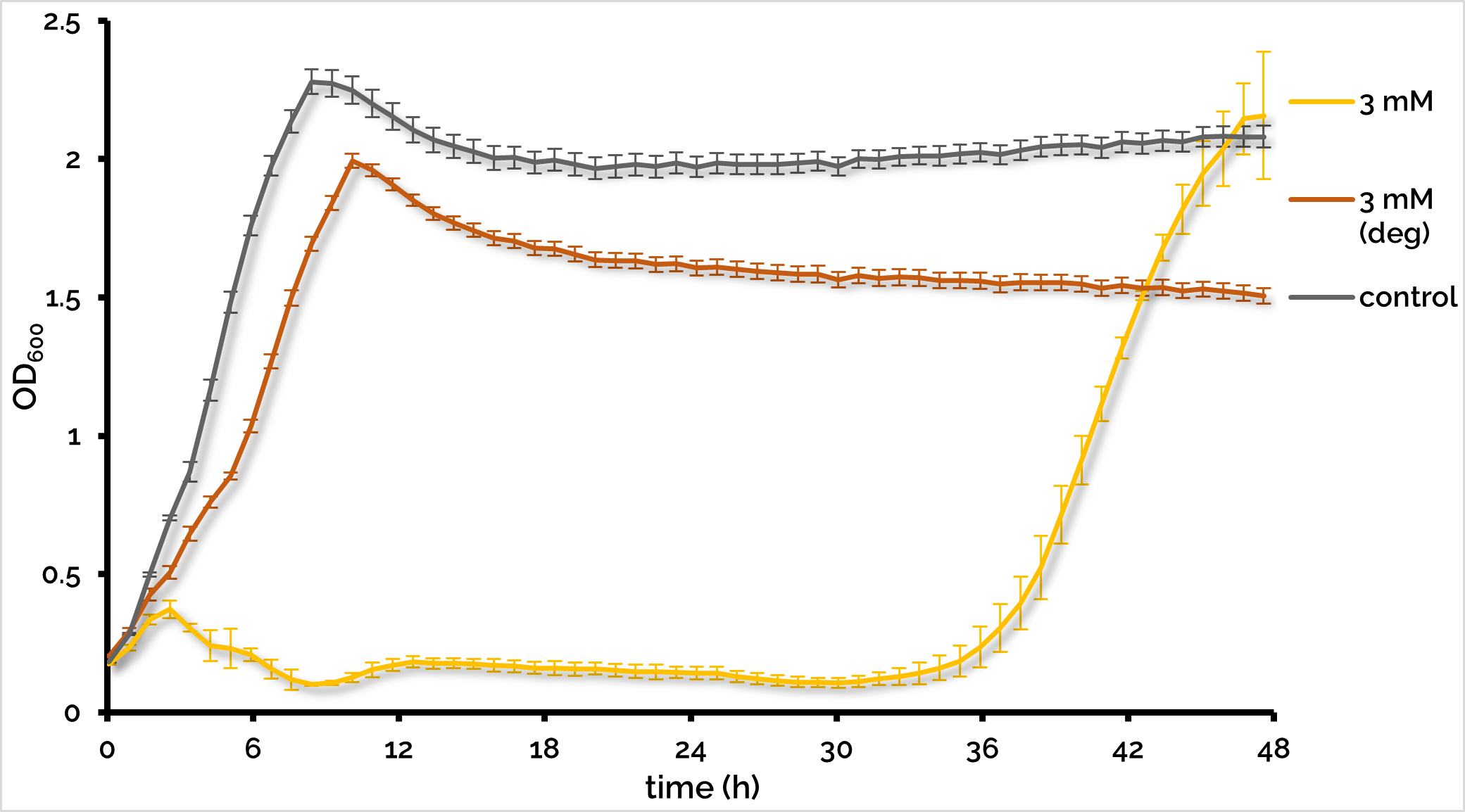 Figure 4:Hydroxylamine toxicity mechanism analysis. The growth of Pseudomonas putida EM42 was measured over a period of 48 h. Data represents the average of three technical replicates.

High nitrite concentrations in the growth medium also seemed to temporarily arrest cell growth (Figure 5). At 32 mM, growth was halted for ~30 hours, whereas growth was barely affected at 16 mM. At 8 mM and below, the growth curves barely varied from those measured in the absence of nitrite. 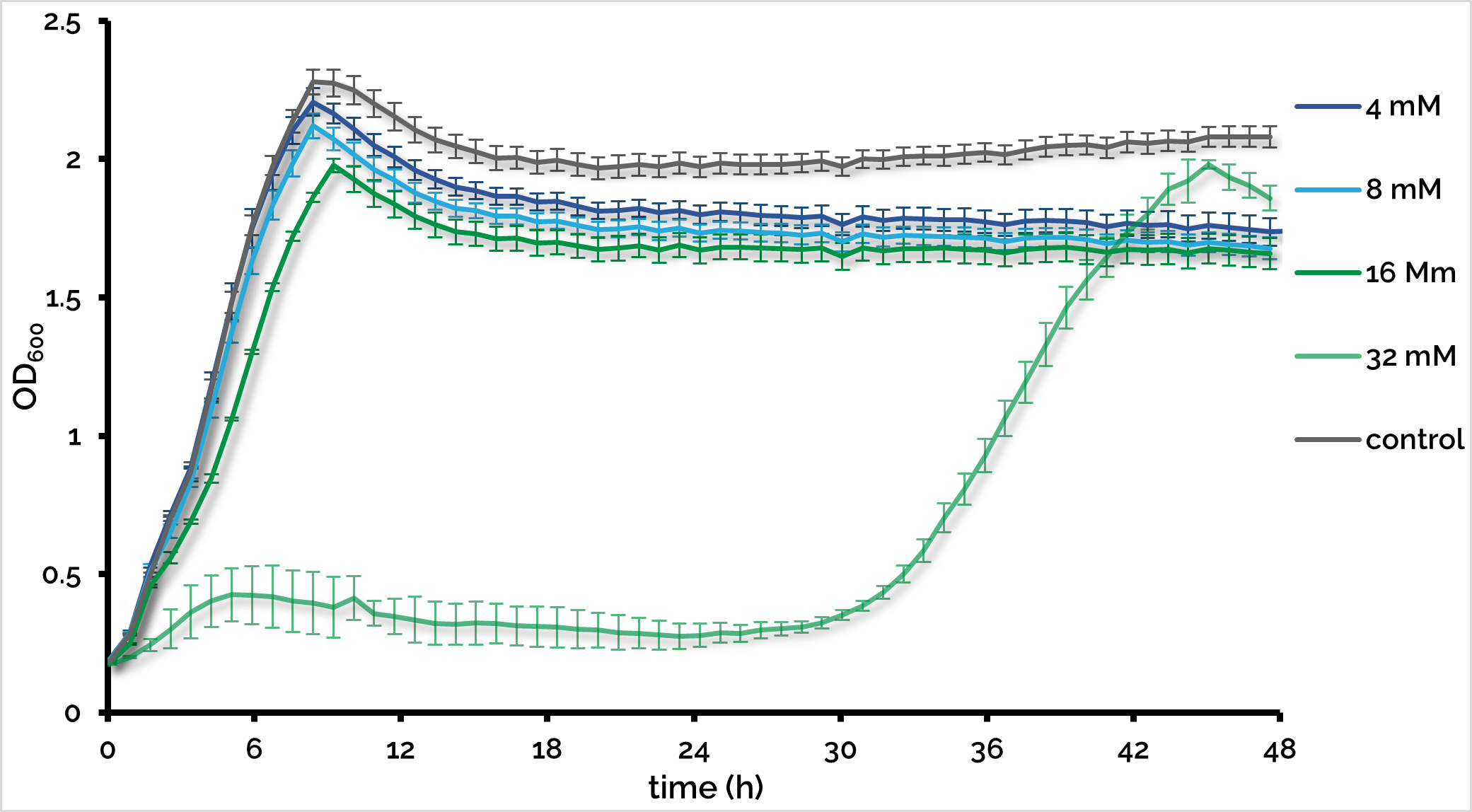 Figure 5:Nitrite toxicity test. The growth of Pseudomonas putida EM42 was measured over a period of 48 h. Data represents the average of three technical replicates.

Again, P. putida EM42 was grown on medium containing 32 mM nitrite that had been pre-incubated for 48 h at 30 °C. In contrast to hydroxylamine, similar lag phases were observed independently of whether the medium containing 32 mM nitrite was freshly prepared or incubated for 48h, suggesting that nitrite is not degraded in the medium without bacterial activity (Figure 6). P. putida EM42 showed a higher initial growth rate in pre-incubated medium, though it should be noted that these cultures were started with an OD600 of 0.2 instead of 0.1. These data show that growth of P. putida EM42 is inhibited by high levels of nitrite, and that this inhibition is overcome by the bacterium through some mechanism that remains unknown. As M9 minimal medium only contains 15.1 mM ammonia and the reaction from ammonia to nitrite is stoichiometrically equivalent, the theoretical maximum amount of nitrite that could be produced by P. putida EM NC2 or -NCX is also 15.1 mM. The concentration of ammonia in the biofilter medium is expected to be lower than in M9 minimal medium. Therefore, nitrite production by the engineered strains is unlikely to be problematic for their performance in the biofilter. 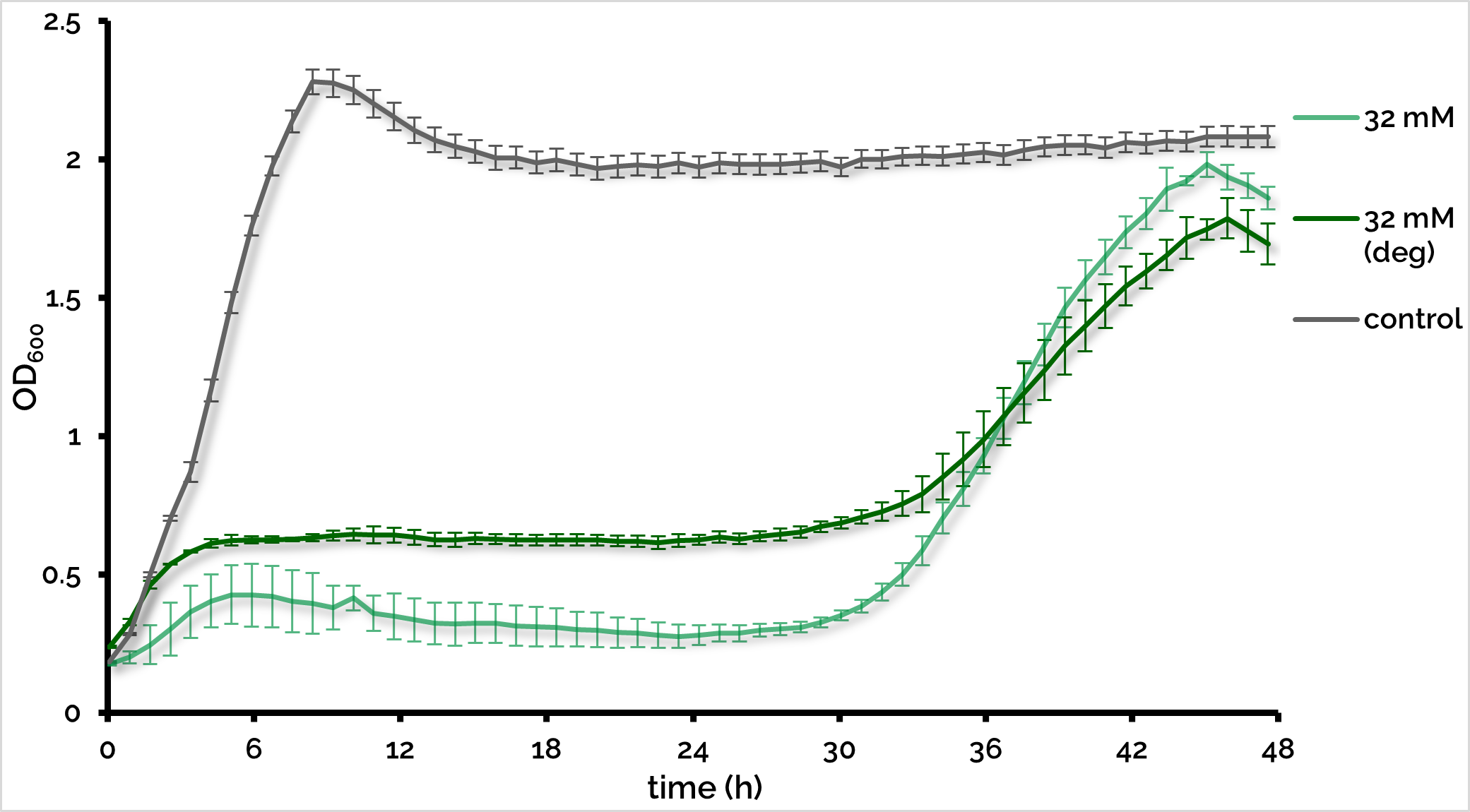 Figure 6:Nitrite toxicity mechanism analysis. The growth of Pseudomonas putida EM42 was measured over a period of 48 h. Data represents the average of three technical replicates.

Nitrate had little to no influence on the growth behavior of P. putida EM42, reflected by the lack of lag phase at even 64 mM nitrate (Figure 7). The slight differences between the growth curve of bacteria grown in the presence of nitrite and the control may be attributed the starting OD600 of the former being 0.2 instead of 0.1. These results show that nitrate production by a nitrifying P. putida EM42 strain would not inhibit growth and is unlikely to impact its performance in the biofilter. 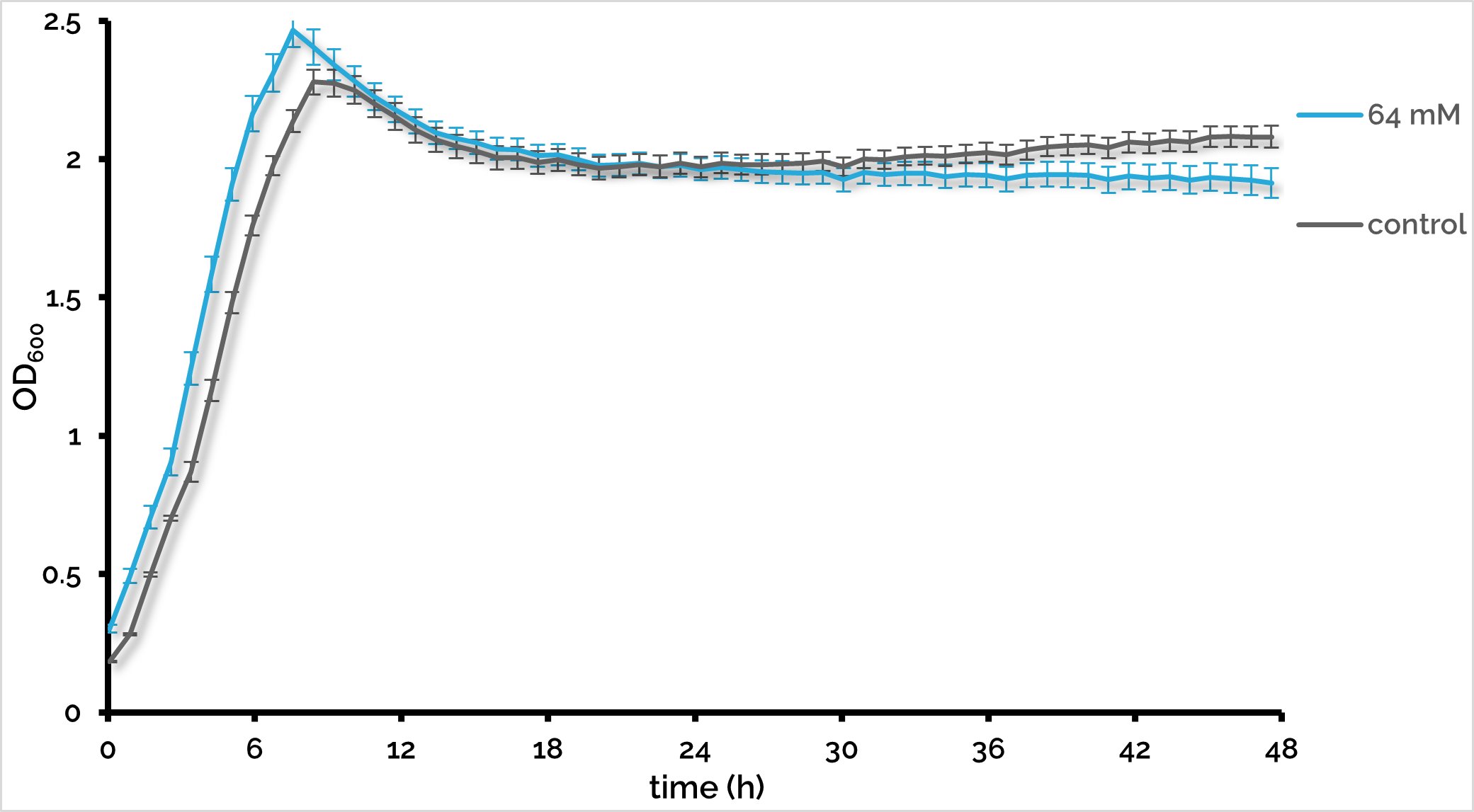 Figure 7:Nitrate toxicity test. The growth of Pseudomonas putida EM42 was measured over a period of 48 h. Data represents the average of three technical replicates.

Unfortunately, the strains created in this project could not be tested for the ability to nitrify due to time constraints.

Toxicity tests indicate that overproduction of nitrite and nitrate are unlikely to have a negative effect on the performance of our biofilter organism P. putida KT2440. Hydroxylamine, an intermediate metabolite of nitrification, inhibited growth of the lab strain P. putida EM42 at concentrations as low as 0.25 mM. Thus, efforts should be made to ensure that hydroxylamine is not accumulated. Two P. putida EM42 strains carrying the genes coding for the nitrification pathway were engineered. Due to time and cloning constraints, these strains could not be tested to properly assess their nitrification activity. The toxicity data generated in this study will be key for future analysis of the heterologous expression of the nitrification genes of N. europaea in P. putida KT2440.