Although biofilters can be an effective and economical tool to clean air with both ammonia and methane, biofiltration of both pollutant emissions have mainly been investigated separately [1]–[5]. To investigate the combined reduction of methane and ammonia emissions, a biofilter model was developed that determines the reactor size and performance for the microbial culture options we have considered for Cattlelyst. The model combines metabolic and reactor modeling with three different scales based on mass balances: single cell, single particle, and reactor scale. The chosen parameters describe the average conditions in a cow stall with 100 milking cows. Both natural and synthetic methanotrophs and nitrification-aerobic denitrification performing bacteria were compared across a range of ammonia and methane conversion efficiencies.
The model simulations showed that the methane and ammonia efficiencies are limited by methane diffusion in the biofilm. Nevertheless, the biofilter can reach similar methane and ammonia conversion efficiencies as biofiltration units designed for methane abatement [5]–[7]. However, a relatively large reactor size (103−104 m3) is needed to accommodate this due to low pollutant concentrations and high gas flow rates. Synthetically engineering methane uptake only slightly improved the biofilter. The bottleneck lays in the transport of methane into the biofilter; this should be improved to truly see the benefits of increased methane uptake. As such, combining the biofilter with a hood system greatly improves performance. Although the biofilter still needs improvement, it does prove simultaneous reduction of methane and ammonia emissions is possible with wild type and synthetic biofilms.

Cattlelyst is a biofilter with genetically engineered microorganisms reducing methane and ammonia emissions from cattle stalls. It combines and captures the ammonia-rich air originating from manure storage, and the methane that the cows emit during digestion. Pollutants entering the biofilter in the gas phase are not immediately available to the microorganisms in the biofilter; transport steps over several phases need to occur [8]. Biofilters essentially are microbial reactors containing a filter bed medium. This medium can be described as a layer made of many solid particles covered by microbial biofilm. This biofilm is covered in a thin layer of water [9]. Therefore, methane and ammonia need to be transported from the gas, through liquid and biofilm phases. The biofilter and transport steps were combined in a model for a conventional biofilter. With this model, we could investigate and understand the impact of the Cattlelyst biofilter by estimating the performance, size and costs of the reactor. 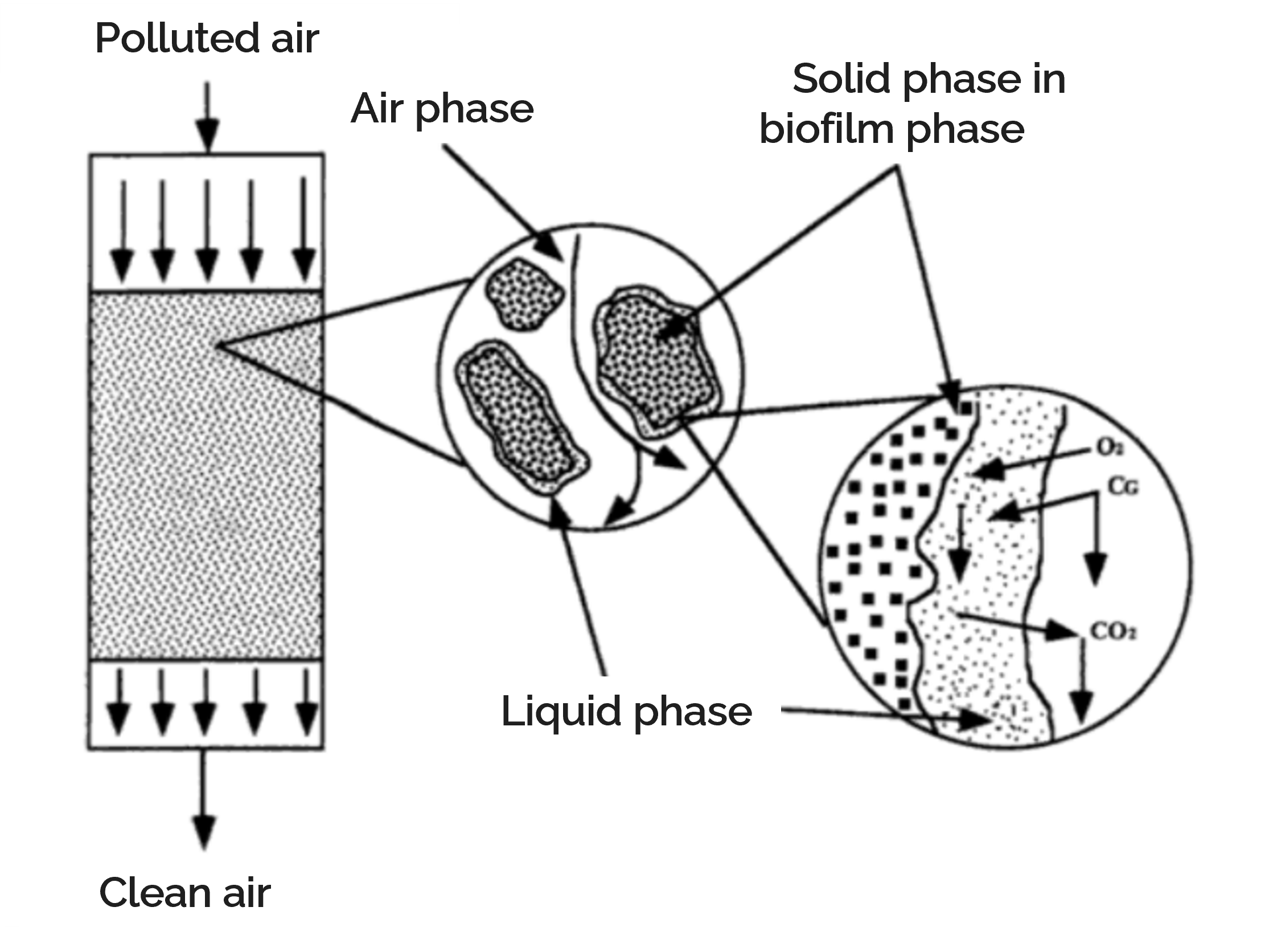 Figure 1: Internal mechanism of a biofilter. Polluted air flows through the filter bed medium, where pollutants (CG) and oxygen (O2) diffuse into the biofilm and liquid phase. The biofilm converts pollutants into carbon dioxide, water, and dinitrogen gas. Adapted from [9].

Metabolic and biofilter modelling were combined to simulate and compare these scenarios. The model calculates the change in ammonia and methane concentrations according to the size of the biofilter. To assess biofilter performance, we determined the removal efficiency and biofilter productivity across a range of realistic conditions. The calculated reactor volumes were used as an estimation of the total biofilter volume for the WUR iGEM 2021 project. Lastly, a rough cost analysis was performed to estimate the total annualized costs of the complete biofilter.

The biofilter model was developed in Jupyter Notebooks [10] (core version 4.6.3; notebook version 6.0.3) with Python 3.8.3. The model is based on mass balances and combines metabolic and reactor modeling in three different scales: the biofilter scale, the single cell aggregate or single particle scale, and the single cell scale. A graphical representation of the stages can be found in Figure 2. 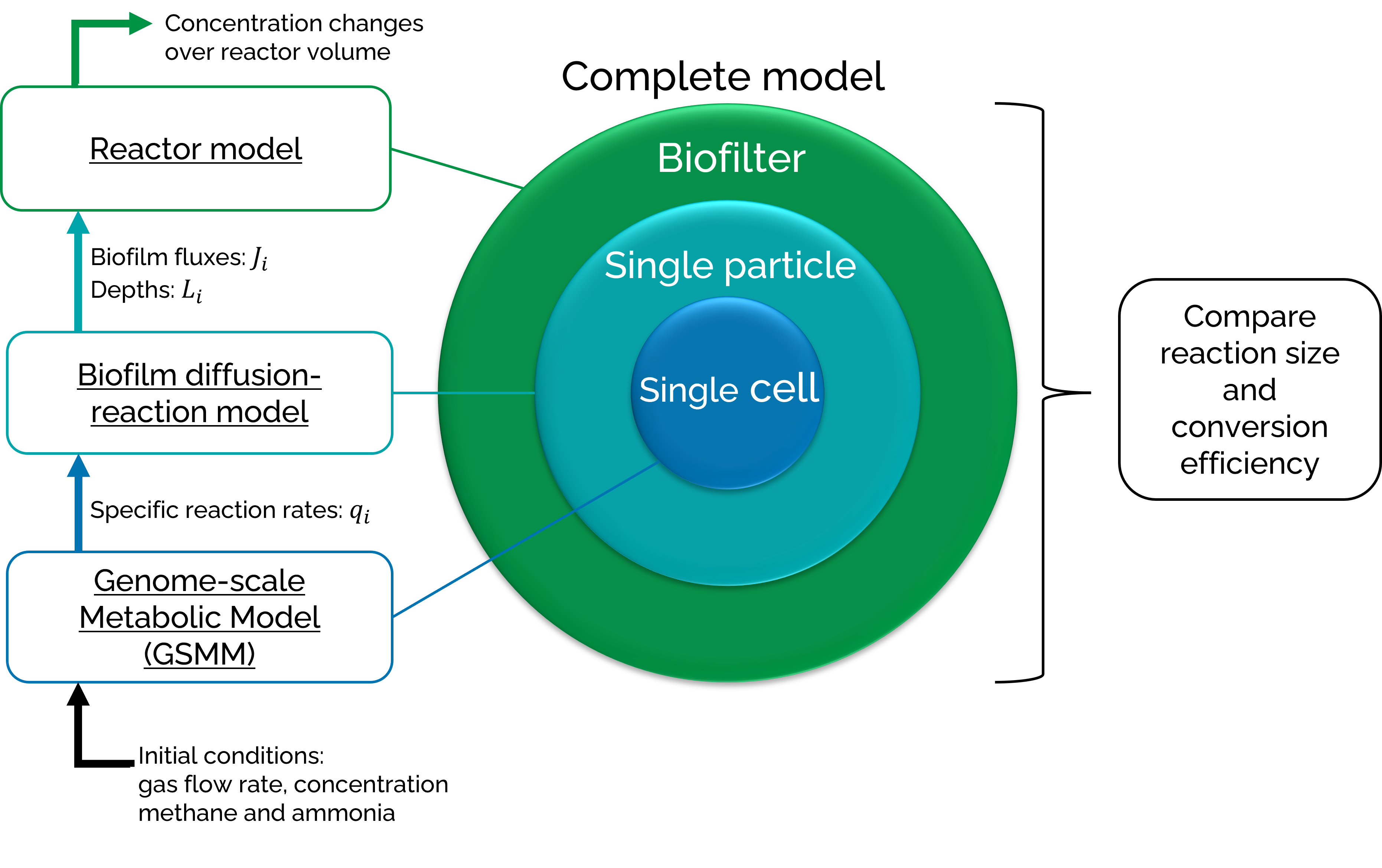 Figure 2: Graphical representation of the three different scales used in the biofilter model of this work. The models are connected to each other via different variables: The specific reaction rate is determined by the GSMM, and used in the biofilm diffusion-reaction model. Then the biofilm reaction-diffusion model determines the penetration depth of pollutants and the biofilm fluxes, which are used by the reactor model. The three model scales combined calculated the concentration change of the reactor volume from the initial gas flow conditions. The resulting simulations were compared by calculating productivity and conversion efiiciency.

The single cell scale is represented by flux balance analysis (FBA) of genome-scale metabolic models (GSMMs) and focusses on specific reaction rates. The single particle scale addresses diffusion limitations in the biofilm with a diffusion-reaction model and focusses on pollutant penetration depths and fluxes into the biofilm. The biofilter scale considers the airflows and transfer steps in a reactor model and focusses on the changing concentrations of the pollutants over the biofilter volume. The three different scales combined form the complete model. This model calculates the change in ammonia and methane concentration over the volume of the conventional biofilter. Two different microbial cultures will be described in the results: a monoculture of the wild type methanotroph Methylococcus capsulatus, and a monoculture of genetically engineered Paracoccus denitrificans that is able to grow on methane. Afterwards, a rough cost analysis was performed according to Devinny et al [9].

The single cell scale uses GSMMs and performs FBA to determine the specific reactions rates (q in mmol gDW-1 h-1) of the microbes in the biofilter. We assume that the aggregate (ammonia and methane) concentration within the biofilter changes much more quickly than in the larger system. As such, we can fix the concentrations to their steady state values such that production and removal are balanced. Therefore, FBA is used for monocultures. We took the FBA package from COBRApy version 0.19.0 [16] with a GLPK solver. The specific reaction rates of methane and ammonia can directly be used in the biofilm diffusion-reaction model.

The diffusion-reaction model results from mass balances over the active biofilm. The model calculates the fluxes and the specific reaction rates into the biofilm. Some assumptions are made to simplify the mathematical definition of these balances: 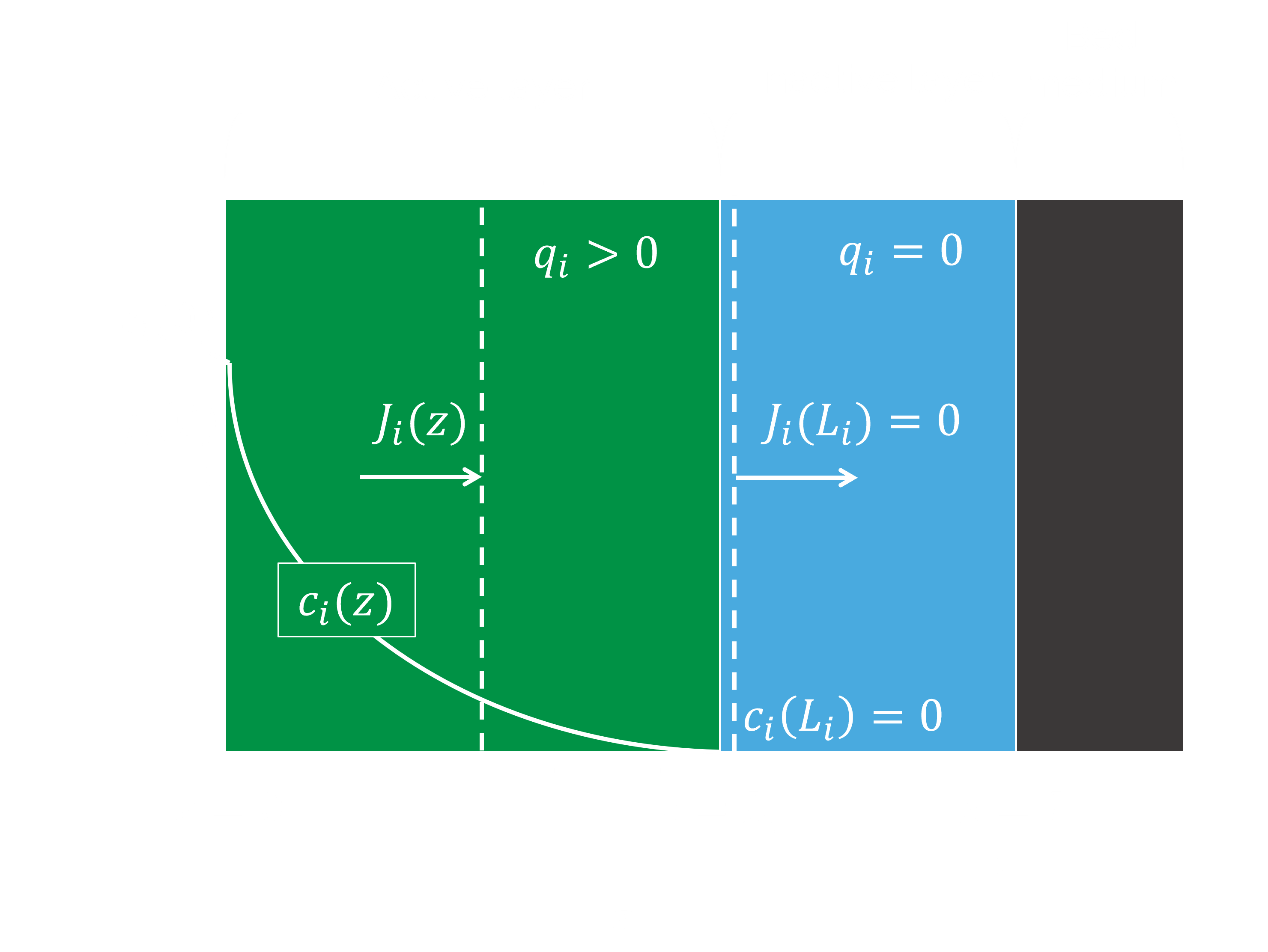 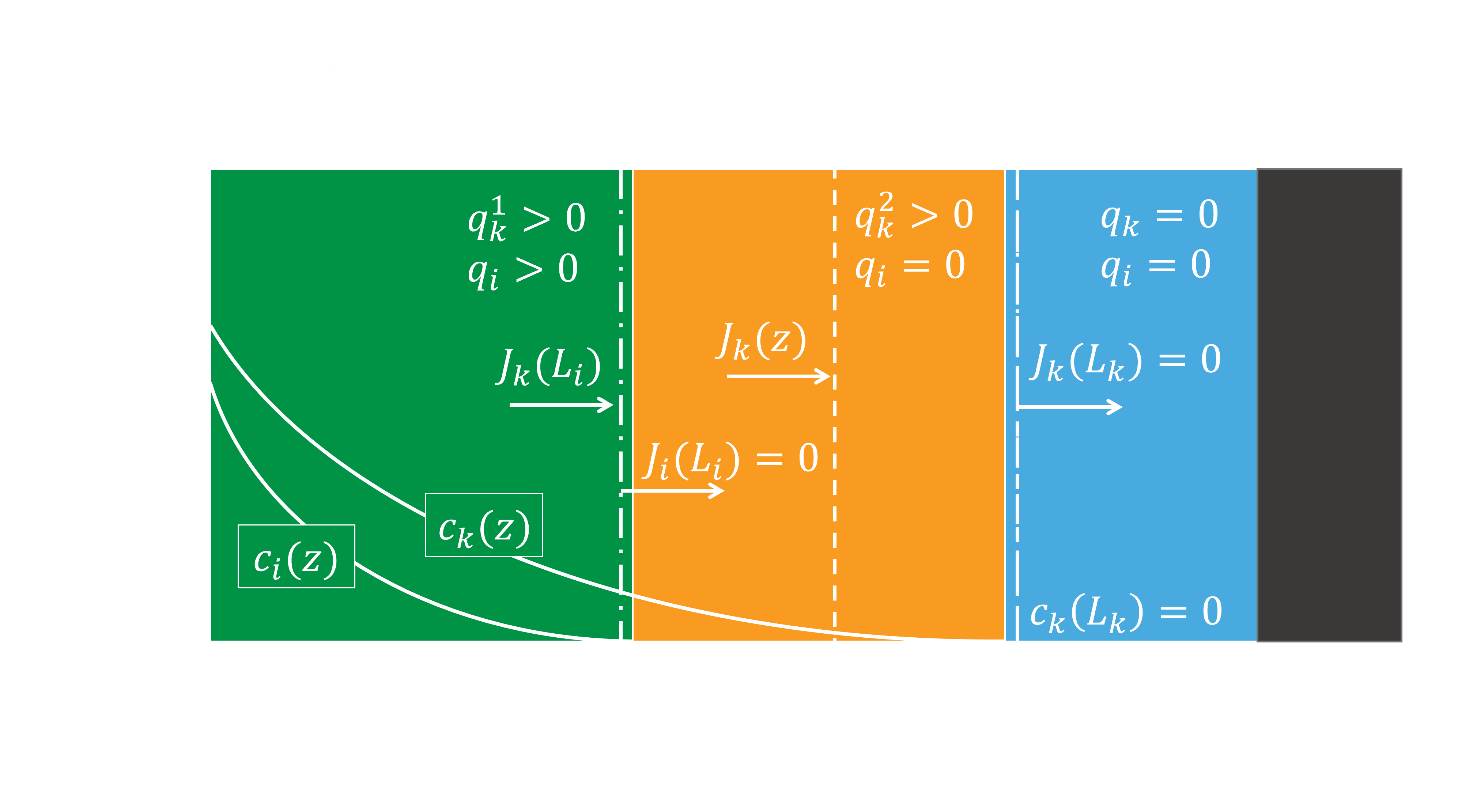 Figure 3: Schematic representation of the transport steps in a conventional biofilter cleaning polluted air. This figure describes the pollutant transport and concentrations changes in a cross section of a bioreactor, and shows the boundaries used for the mass balances over the different phases. Top: a biofilm with one active layer, Bottom: a biofilm with two active layers. B = biofilm, L = liquid phase, G = gas phase, Fg = gas flow rate (m3 h-1, cig = concentration of compound i in the gas phase (mmol-3), V= volume of the biofilter ( m3), N= transport rate of compound i at the gas (g), liquid (l) or biofilm surface (lp) (mmol m-3 h-1).

These balances are still underdetermined because the penetration depths of the limiting compounds are unknown. They can be calculated with Fick’s first law [25], macro mass balances over the ends of the active layers, and a mass balance over the complete second active layer:

A conventional biofilter was chosen as the operational unit for the biofilter in the reactor model. This means that the gas phase was assumed to have an ideal plug flow pattern, and the liquid and biofilm phases to be in batch conditions [28] (see Figure 4. However, the assumption is made that the total system is in steady state. This means that no accumulation of pollutants exists in the batch phases. The mass balances for gas, liquid and biofilm phase in this system are shown in (Eq. 13) to (Eq. 15), respectively. 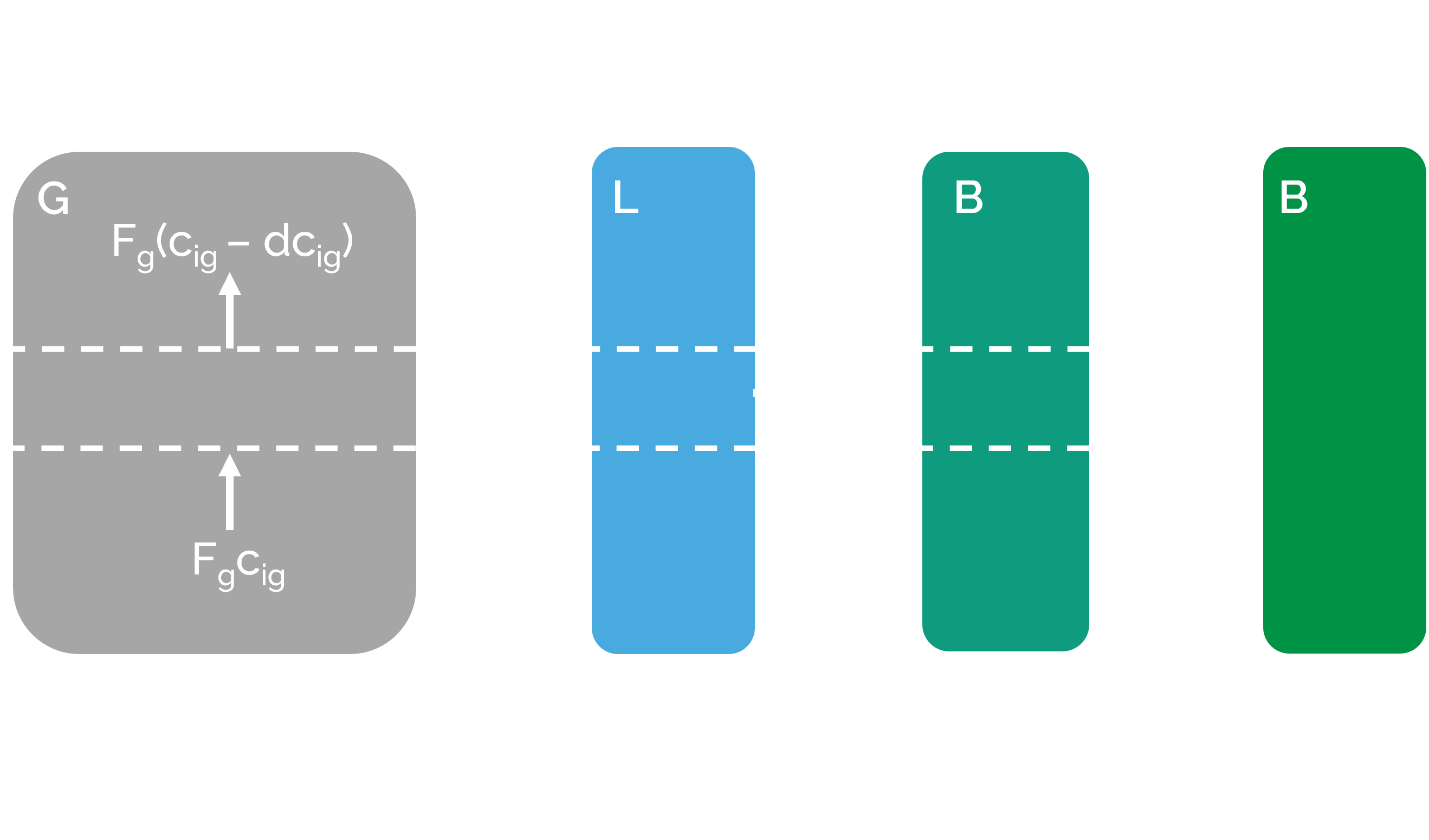 The above described model calculates the change in pollutant concentration over the volume of the biofilter.
As a case study, we used a cattle farm with 100 milking cows, comparing a system with and without a hood system (see Implementation). First, ranges of both the initial gas concentration of methane (csg,in) and ammonia (cng,in) were simulated with a constant gas flow rate (Fg). The optimal ratio between csg,in and cng,in was chosen (ratio 13.33:1 for M. capsulatus and ratio 7.5:1 for P. denitrificans), then a range of Fg was simulated with this ratio. 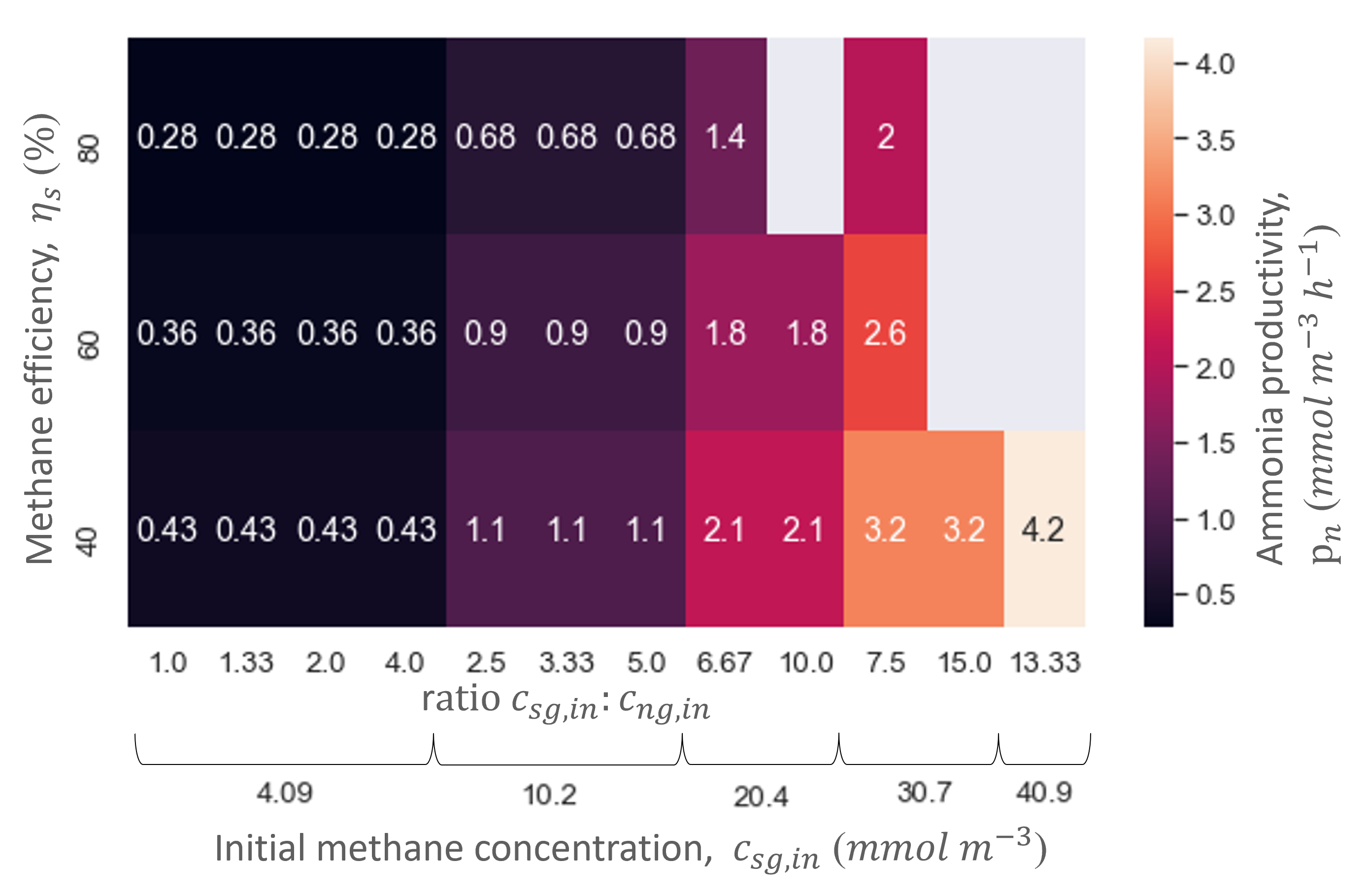 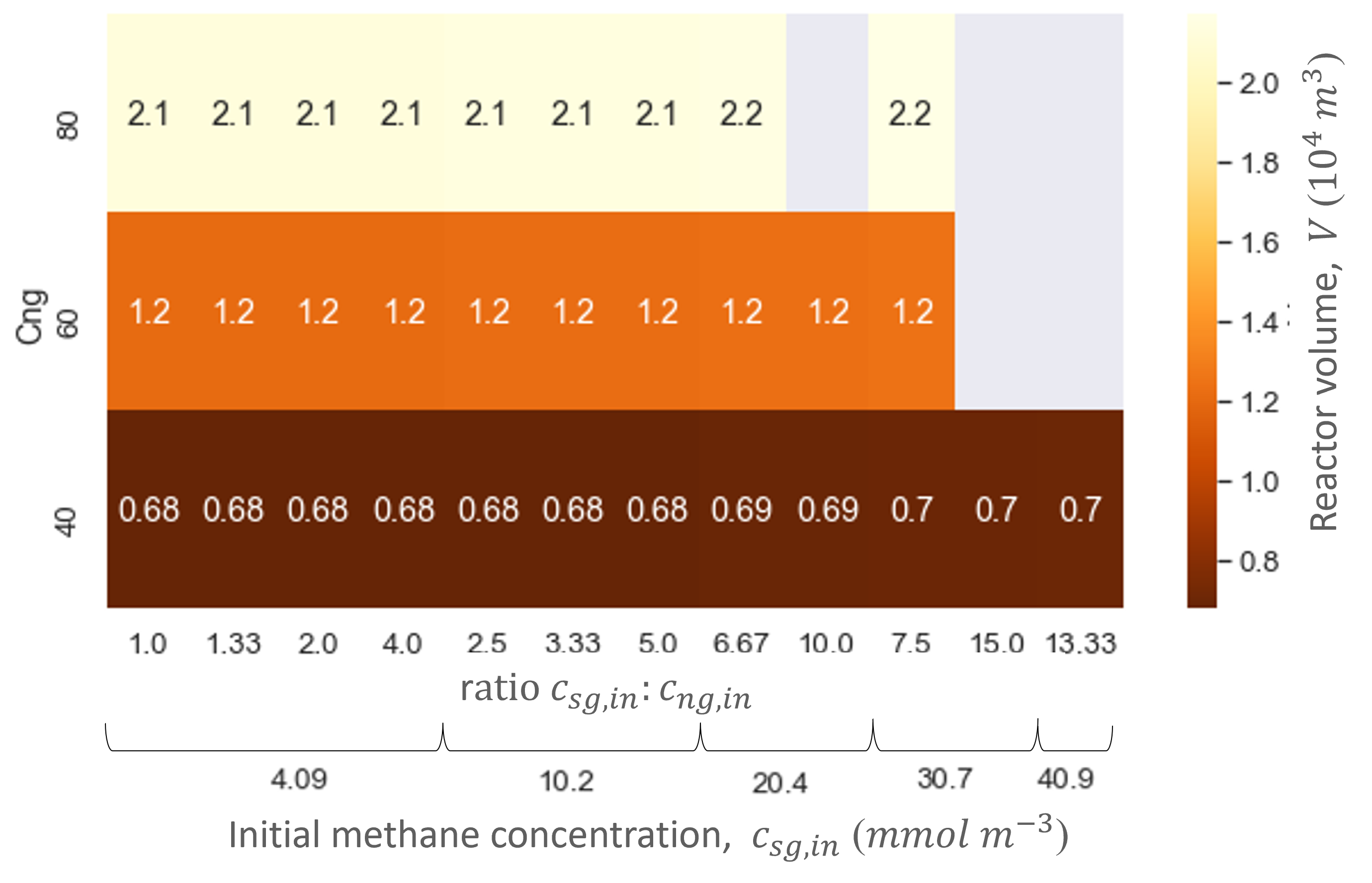 Figure 5: Example heatmaps showing the effects of changing initial methane concentration or the ratio between initial methane and ammonia concentrations on ammonia productivity and biofilter volume. Left: ammonia productivity for biofilters with engineered P. denitrificans. For P. denitrificans, only the ratios that reach at least one of the chosen efficiencies are displayed (Higher efficiencies are not reached if either methane of ammonia are depleted). Right: total reactor volumes of biofilter with engineered P.denitrificans. 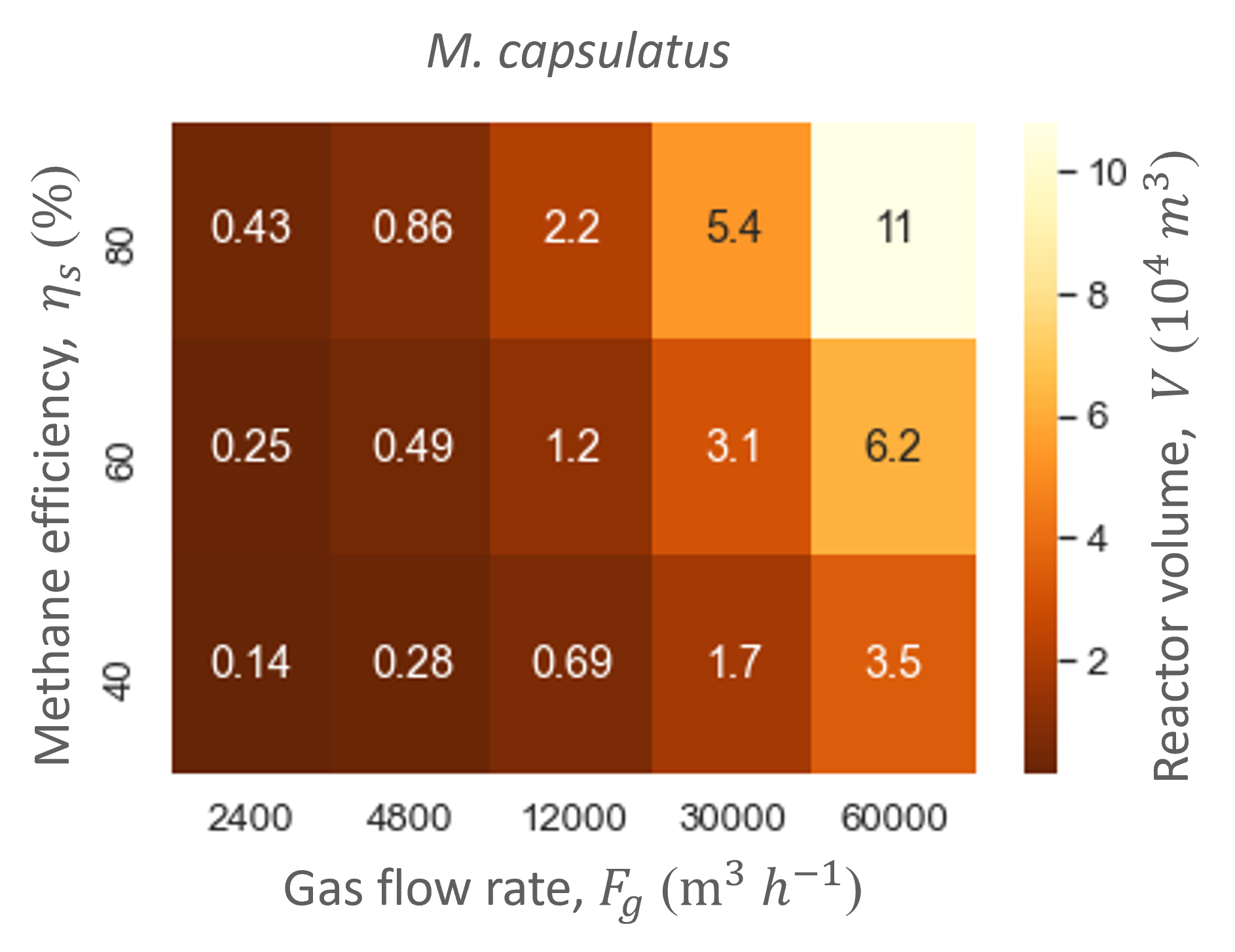 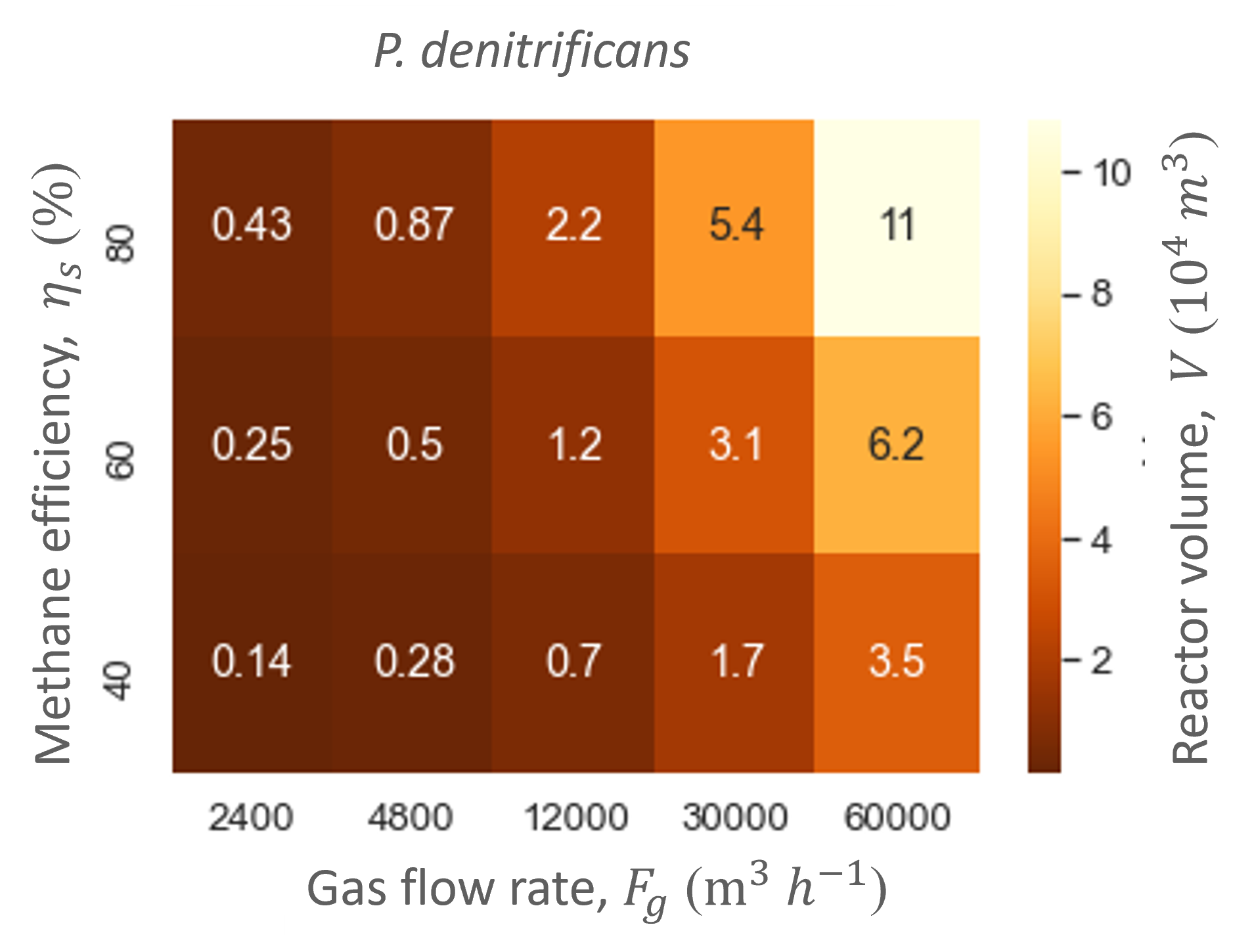 Synthetically engineering methane uptake only slightly improved the biofilter: the increase in performance at the same conversion efficiencies of methane and ammonia was extremely low in comparison to normal methane uptake (Table 5 and Figure 7); e.g., ammonia productivity only increases 0.1 mmol m-3 h-s. This shows that improving methane conversion barely influences the biofilter performance, and the biofilter bottleneck lays somewhere in the transport of methane into the different phases in the biofilter. Nevertheless, the signs of small differences in performances shows that an improved methane conversion could potentially be beneficial in an improved biofilter design in the future. Although the biofilter still needs improvement, it does prove simultaneous reduction of methane and ammonia emissions is possible with wild type and synthetic biofilms.

Table 5: Table summarizing the biofilter performance measures for a normal and increased uptake by the engineered P. denitrificans for the three different biofilter configurations with the optimal ratio of initial concentrations. 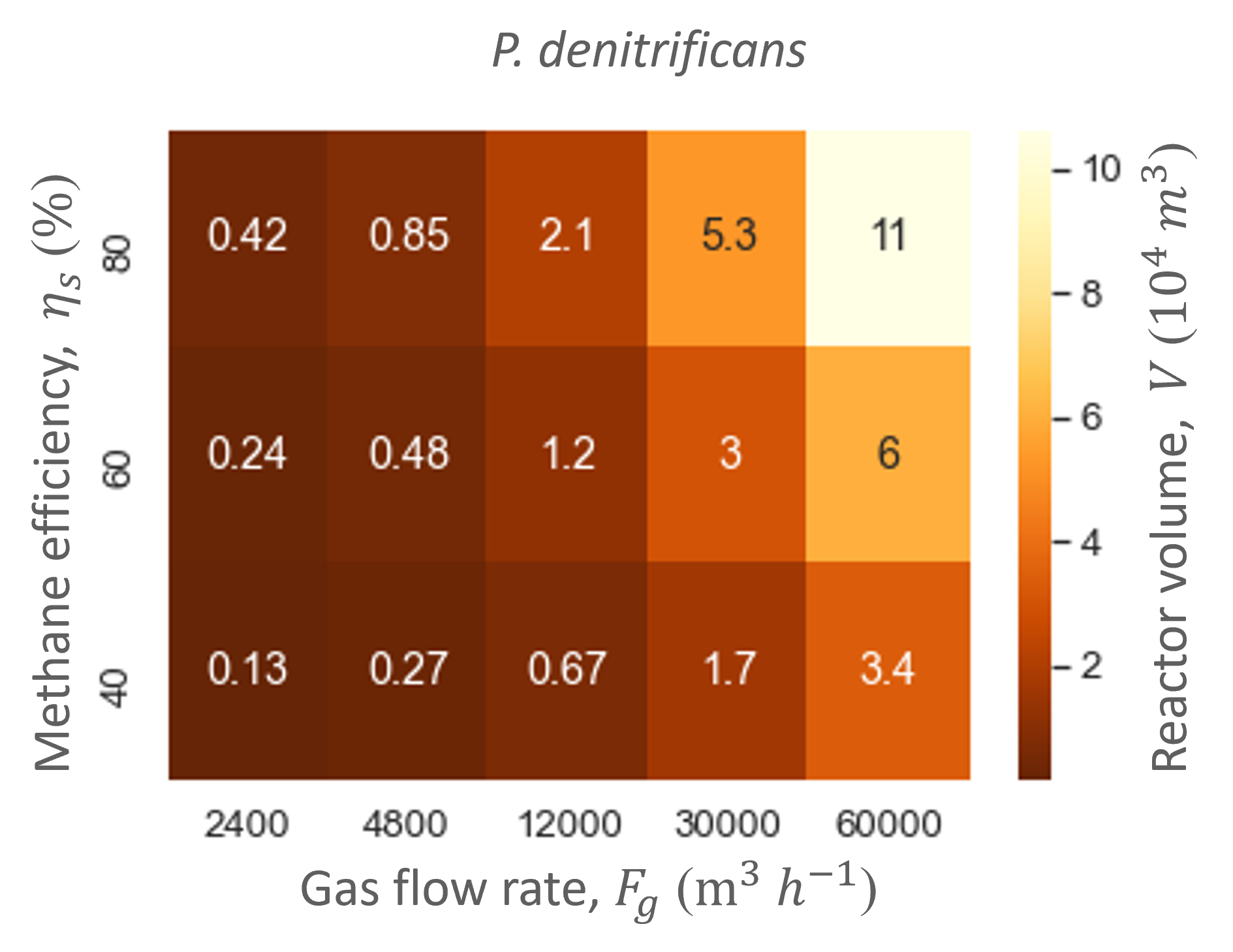 The last question that remains is: how much will such a system cost? Both our work in Human Practices as well as this model showed a hood system is beneficial for our biofilter (lower gas flow rates result in smaller biofilter sizes). Therefore, we focused our cost analysis while considering the conditions that are expected when combining Cattlelyst with the hood system. With an average biofilter size of 104 m3, the total annualized costs for a stall of 100 cows are approximately $1.2M or €1,0M. This amounts to $12K or €11K per cow per year. The total annualized costs can be divided in the annualized investment costs (59%), annualized operating costs (35%) and medium replacement costs (6%). Despite the installation of the hood system, the investment costs are still large and the main contributor to the total costs. The total costs are clearly better with the hood system, as with natural ventilation the total annualized costs would be approximately $2.9M or €2.4M per year for a stall of 100 cows. 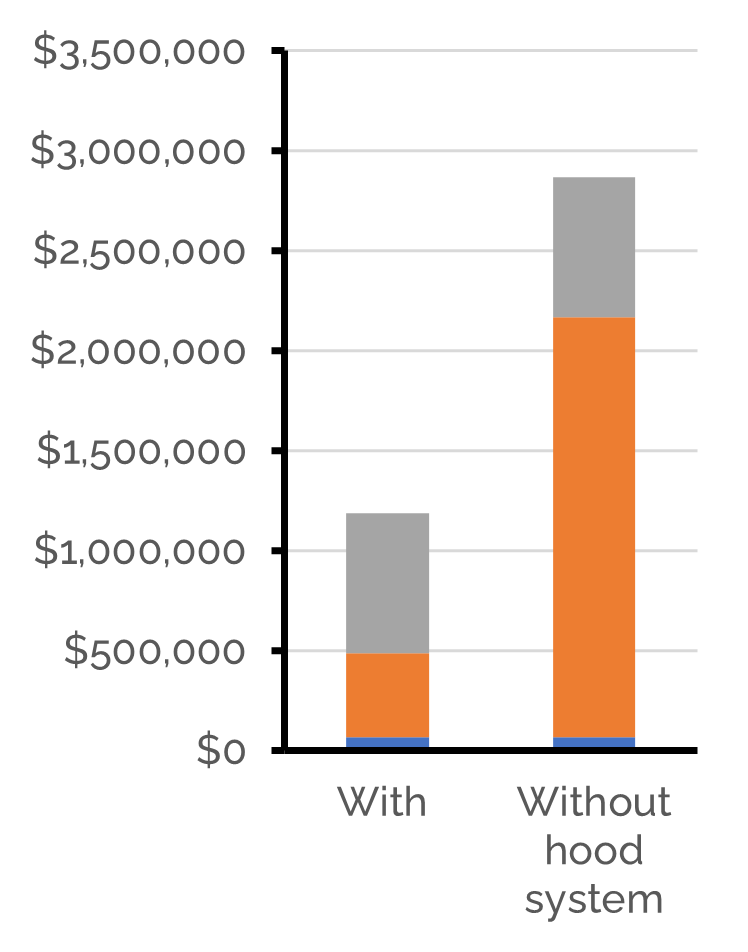 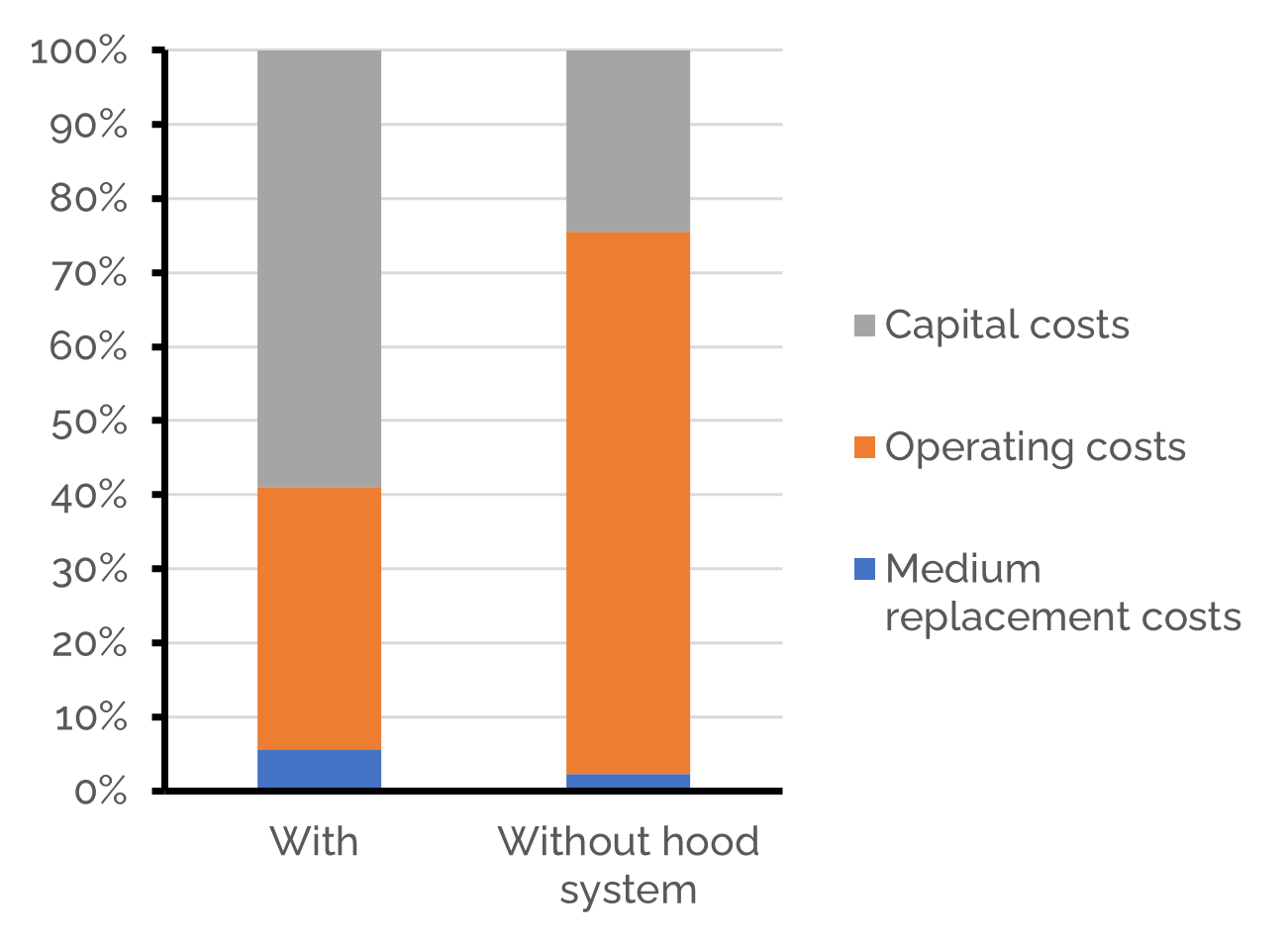 As a case study, we used a cattle farm with 100 milking cows, comparing a system with and without a hood system. A relatively large reactor size (103−104 m3 is needed to accommodate the conditions of this study due to the low pollutant concentrations and high gas flow rates. Synthetically engineering methane uptake only slightly improved the biofilter. The biofilter bottleneck lays in the transport of methane into the biofilter; this should be improved to truly see the benefits of increased methane uptake. Nevertheless, decreasing the gas flow rate also decreases the overall costs, thus, a hood system greatly improves the system. Although the biofilter still needs improvement, it does prove simultaneous reduction of methane and ammonia emissions is possible with wild type and synthetic biofilms, which is the first step towards implementation.