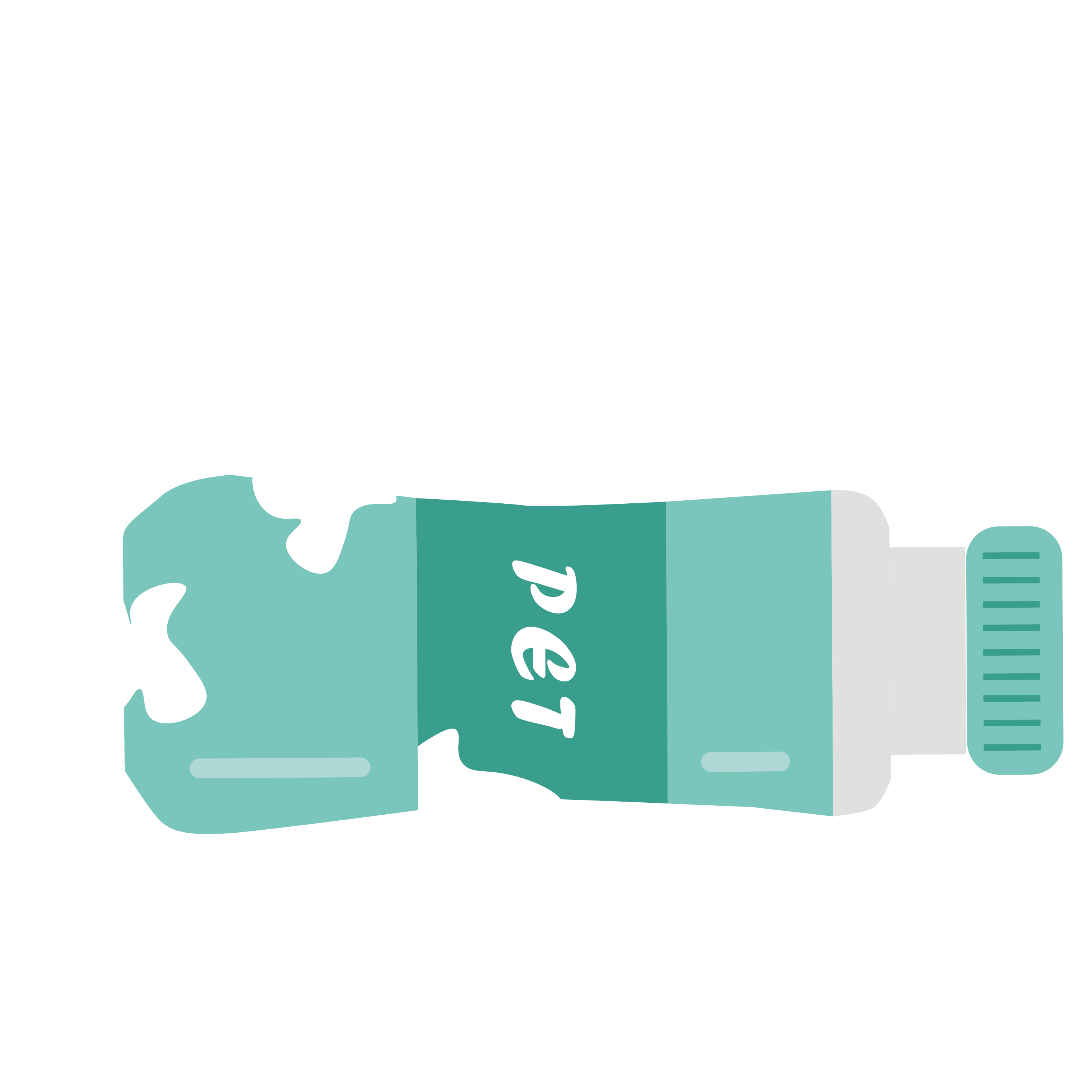 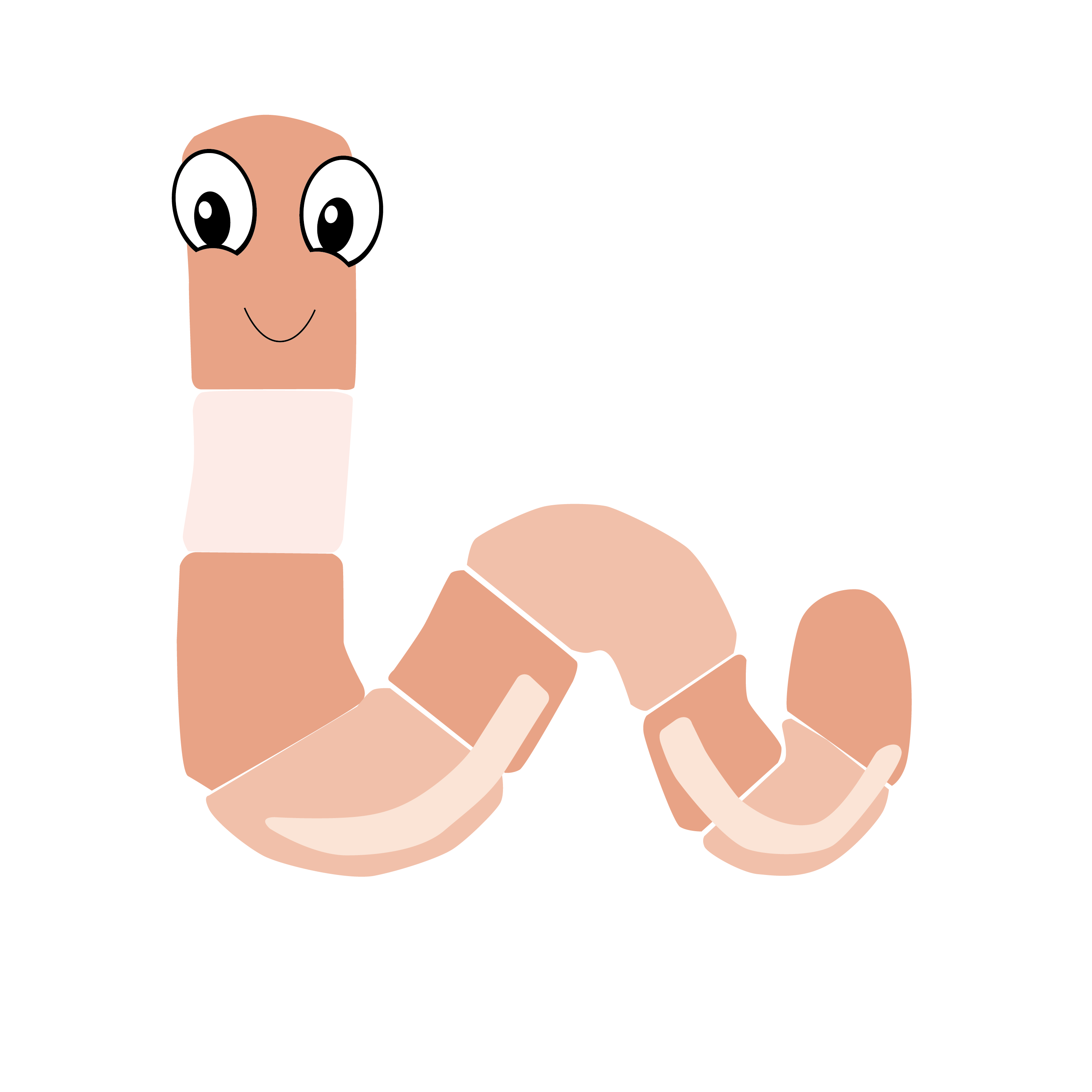 We found in the literature that Wu Bian’s team from the Institute of Microbiology of the Chinese Academy of Sciences optimized the enzymes required by the Osaka bacteria to degrade PET plastics, and obtained a redesigned enzyme with significantly enhanced stability, which made the Osaka bacteria more efficient in degrading PET films. It was improved by 300 times, and we found its optimized ISF6_4831 protein sequence. According to the relevant data of NCBI, we found the protein sequence of Osaka bacteria ISF6_0224; the protein sequence of GFP fluorescent protein. We fused the gene sequences of ISF6_4831, ISF6_0224, and GFP fluorescent protein, and added linker (GGGGS/GGGGSGGGGS) between the two sequences. The linker protein has a high degree of freedom and is not expected to affect the protein function expression.

Through literature review, ethylene glycol can affect the conformation of the glycine riboswitch and enhance transcription. The structure of ethylene glycol is very similar to that of glycine. Although it is not a ligand for the glycine riboswitch, it will affect the riboswitch and enhance transcription [1]. Therefore, this ribose switch can be used to switch the positive feedback path at the right time. mCherry can be used as a smooth expression of the positive feedback pathway.

The transcription of the sacB promoter is not strictly regulated by sucrose, and can be transcribed without an inducer, but the intensity is 100 times lower than that with sucrose [2].

All in all, the pathway we hope is (as shown in Figure 2): When transferred into the transformed plasmid, Bacillus subtilis can degrade a certain amount of ethylene glycol due to the loose regulation of the sacB promoter. With the release of ethylene glycol, the terminator contained in the riboswitch will be hidden, and the fusion protein of MHETase and PETase will be expressed more. At this time, mCherry is also expressed as a reporter gene. At this time, sucrose amplification effect needs to be added, and more ethylene glycol will increase the transcription of PETase-MHETase fusion protein. It presents a positive feedback effect, and the front end of each fusion protein will have the signal peptide SPLamB, thereby secreting more fusion proteins to the outside of the cell for degradation. 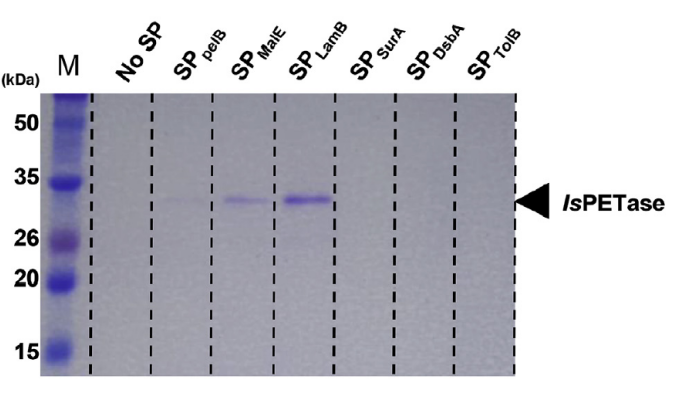 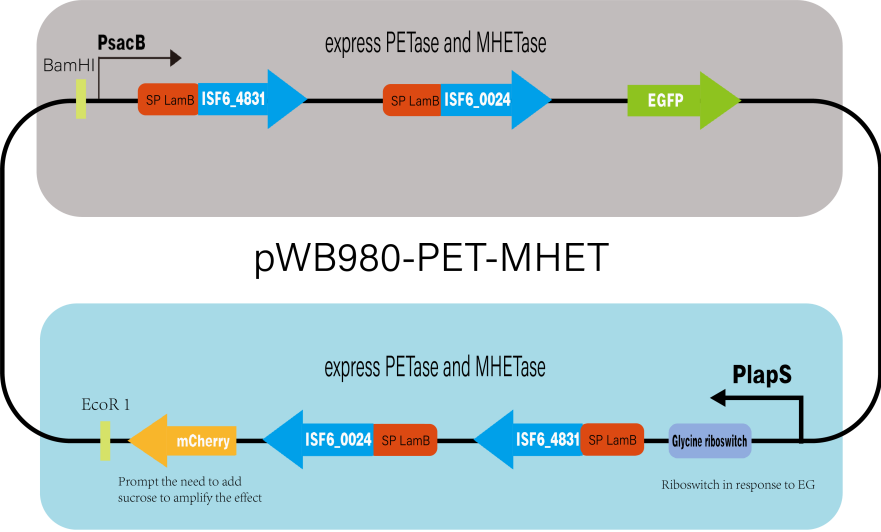 ② Obtaining the plasmid of fusion expression of pET28a The linearized plasmid was obtained by double digestion with Nde Ⅰ and BamH Ⅰ, and the synthesized fusion fragment was introduced into the restriction sites of Nde Ⅰ and BamH Ⅰ by means of PCR, and pET28a and PETase-MHETase- GFP and PETase-MHETase-mCherry are connected. Thus, the recombinant plasmid of pET28a was obtained.

Use 500 mL of LB medium for secondary culture of BL21(DE3) large intestine, and shake it to OD600 of 0.6-0.8 at secondary level. At this time, add IPTG for 16 hours of induction. Purify the protein, and save the supernatant and precipitate, use SDS-PAGE method to detect protein expression and secretion.

In addition, you can also use a microplate reader to detect GFP or mCherry, separate the cultured cells and supernatant, and observe the presence of GFP or mCherry in the supernatant. The degradation of PET film can be assessed by weight loss, carbon dioxide generation through PET catabolism, and changes in the surface morphology and increment of the film determined by scanning electron microscopy (SEM) [3].

The sequences of the laps promoter and the glycine riboswitch were obtained in the literature, and the sequences were sent to the gene company for synthesis.

Then perform the second digestion. At this time, the digestion is BamH Ⅰ single digestion. The synthesized laps promoter and glycine riboswitch are combined with the PETase-MHETase-mCherry (which already contains SP LamB signal peptide) amplified by PCR. Cut the connection. Finally, the recombinant plasmid backbone shown in the figure below is obtained (as shown in Figure 3). 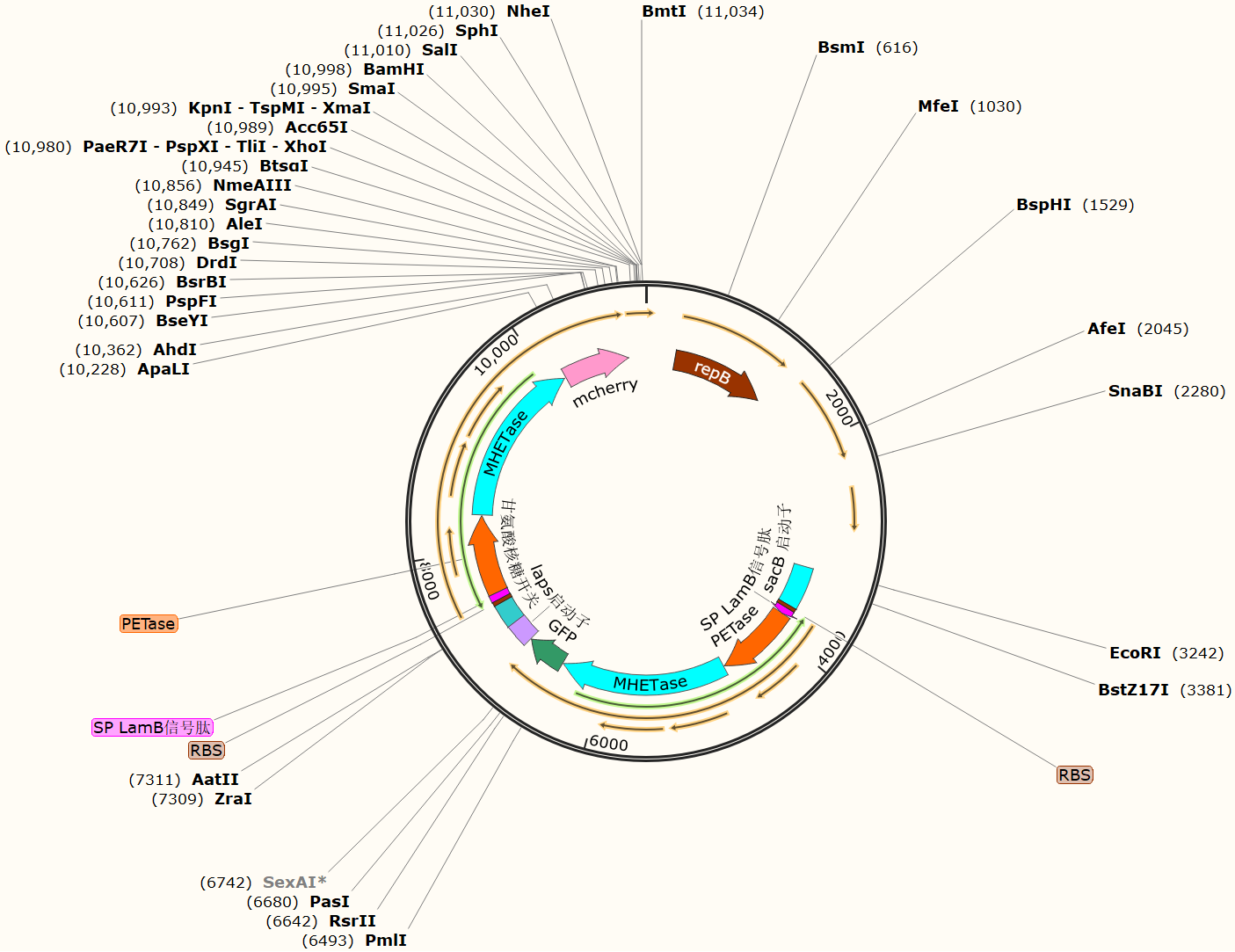 The obtained recombinant plasmid was introduced into Bacillus Subtilis 168 for expression, the intensity and presence of GFP fluorescence were detected to determine the expression of the fusion protein, and the expression was detected by Western blot using mCherry and GFP antibodies. 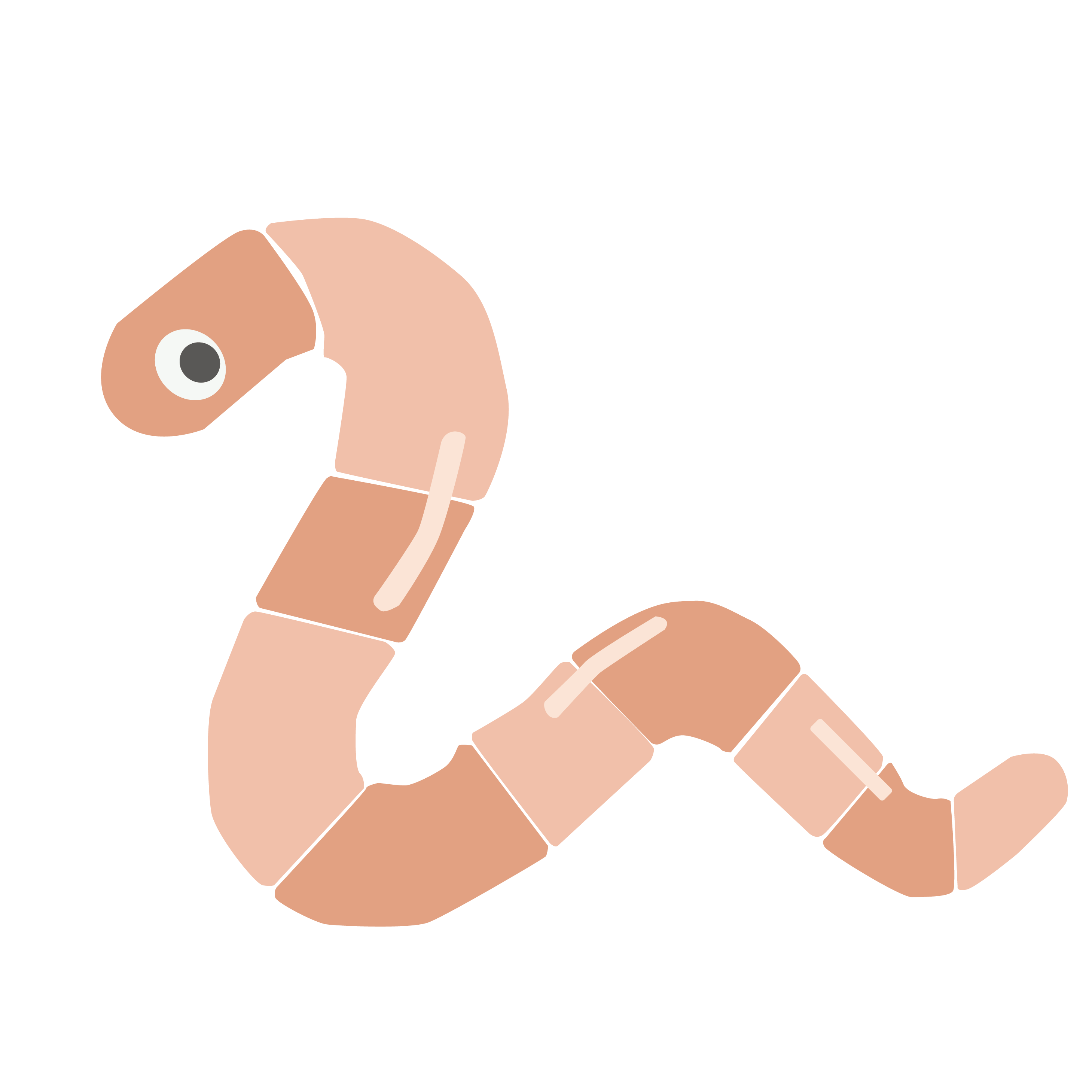 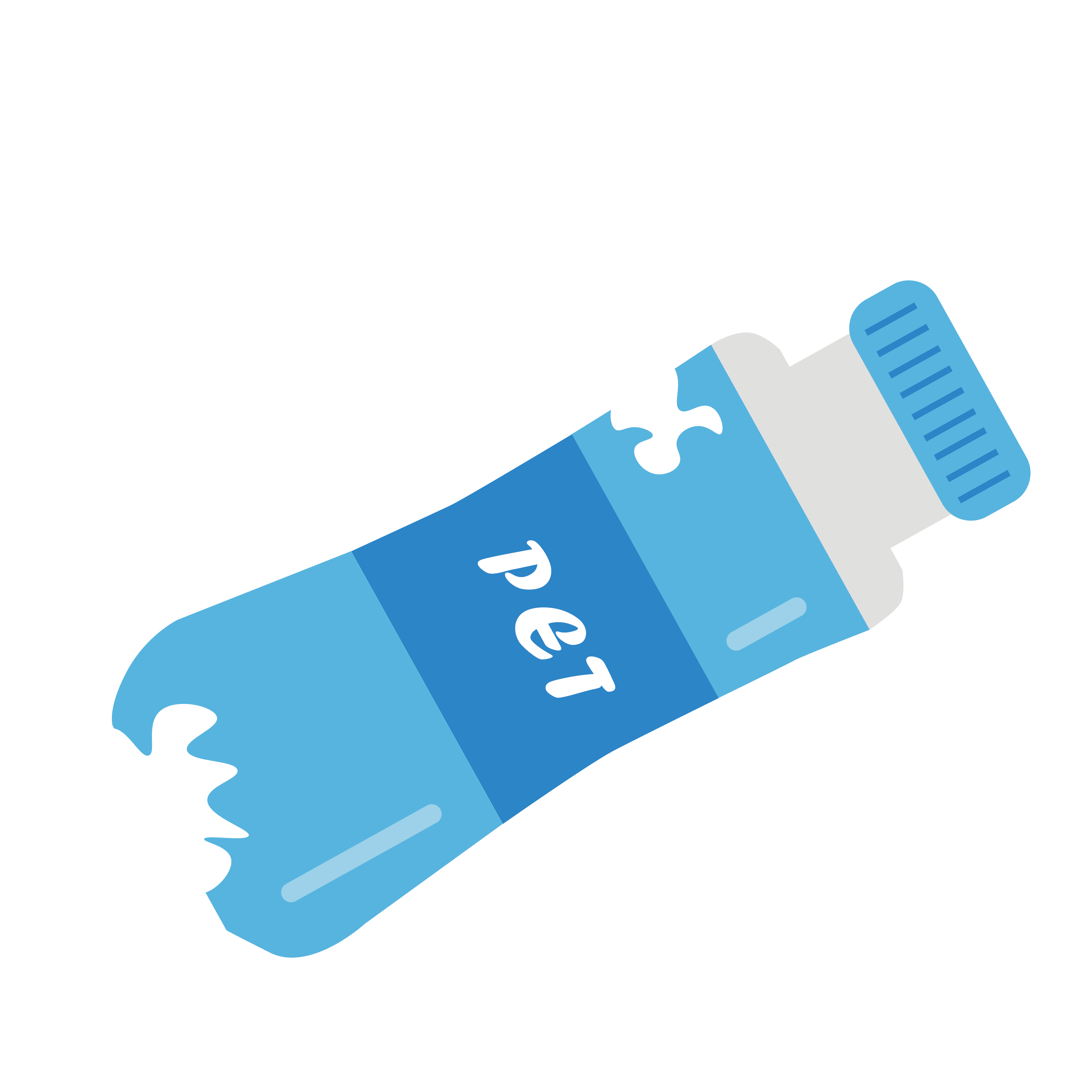