We Created E. coli DH5α with chromosomally-integrated mcherry to use as a model for STEC.

The chromosomally-integrated mcherry model was generated utilizing a Clonetegration protocol [1]. NEB5α Competent E. coli cells were transformed with pOSIP-KL-mcherry [2] to integrate the entire pOSIP cassette into the genome at the lambda attB site. We made those transformants chemically competent, then subsequently transformed them with pE-FLP to “flip out”, or excise, the integration cassette containing the kanamycin resistance and phage integrase genes.

We verified successful Clonetegration by streaking colonies on ampicillin and kanamycin plates and observing that pE-FLP transformants lost their resistance to kanamycin. We also performed colony PCR on the chromosomal lambda attB site in order to verify successful integration after transformation of pOSIP-KL-mcherry, and excision of the integration cassette after transformation with pE-FLP [Fig. 1]. Fluorescence was verified utilizing a plate reader where DH5α non-fluorescent cells were compared to three replicates of non-targeting pMADRID into DH5α-mcherry cells [Fig. 2]. 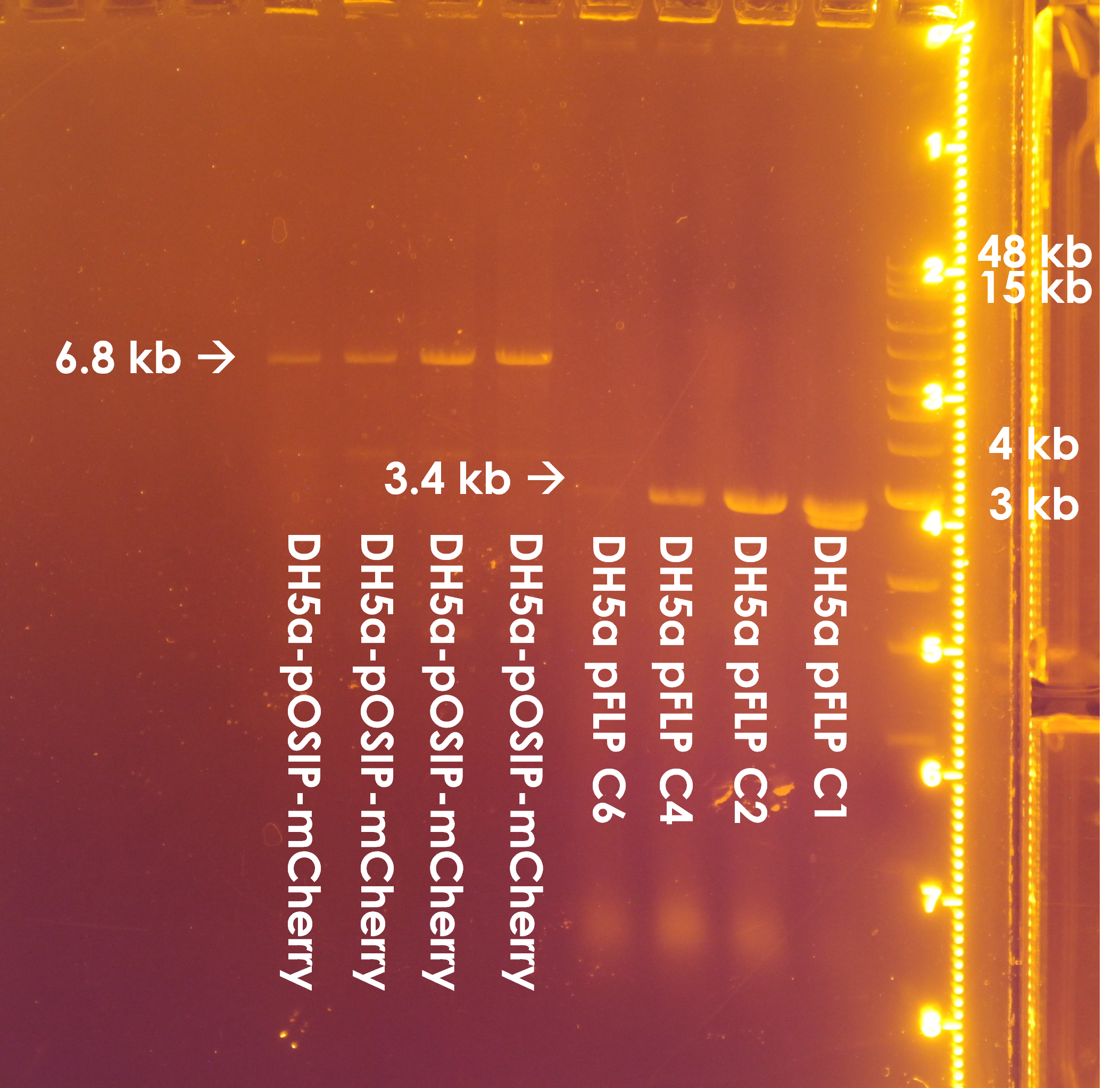 Figure 1: A 1% agarose gel depicting colony PCR products of both pOSIP-KL-mcherry integrants and colonies flipped after pE-FLP transformation. The primers used in this colony PCR were designed to amplify the lambda attB site on the DH5a chromosome. The expected product when the entire OSIP cassette is integrated is 6.8 kb, and the expected product for flipped integrants is 3.4 kb. 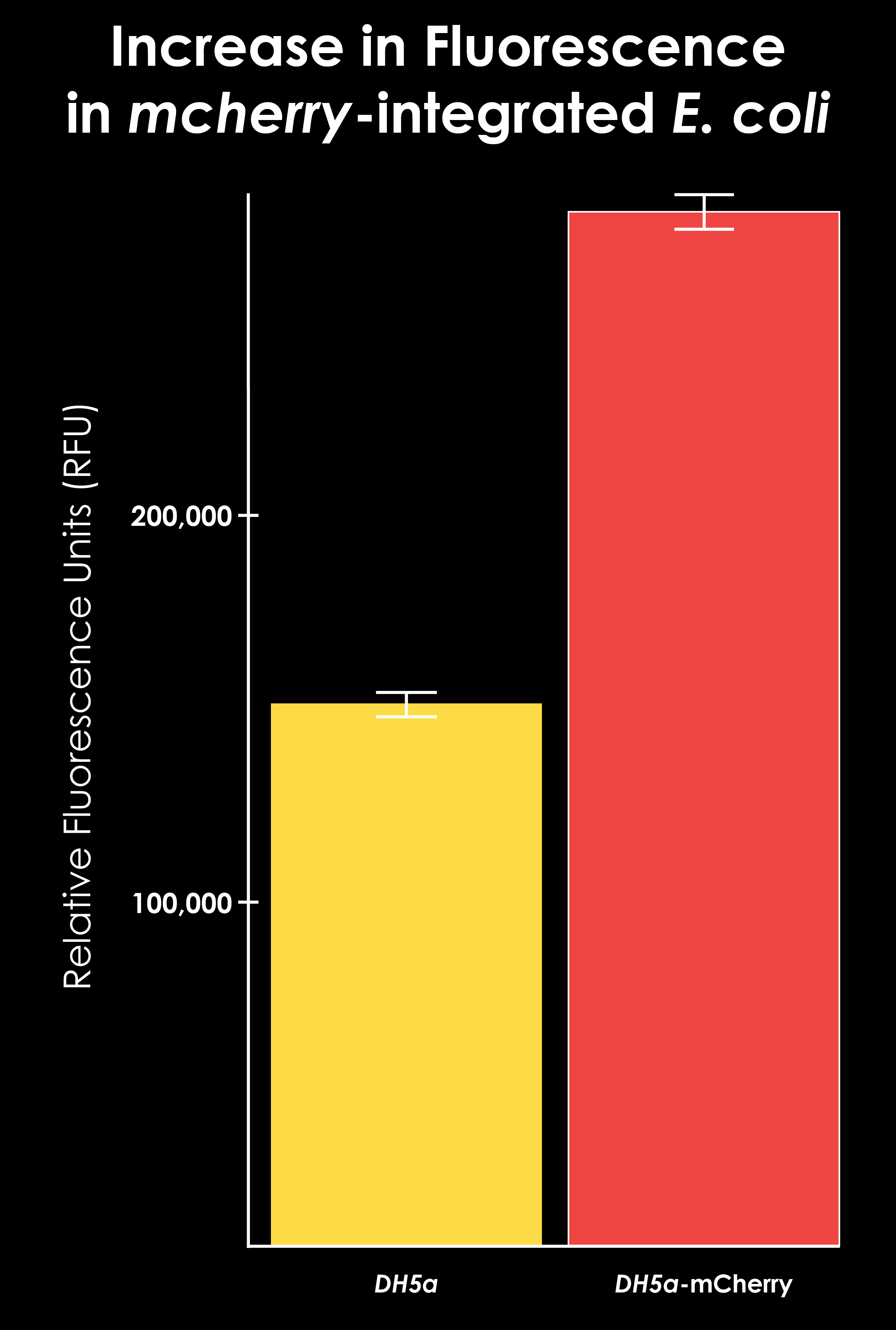 The BamHI-DR-BSAI-gRNA-BSAI-DR-SalI region was PCR amplified from pSL1142 (pSPIN) plasmid [3], treated with DpnI, and cleaned using a Monarch PCR clean up kit [Fig. 3]. The PCR product containing the gRNA and pSL1812 (pSPAIN, generously donated by Leo Vo and the Sternberg lab at Columbia university) were double digested with BamHI and SalI. The vector pSPAIN was incubated with TSAP to dephosphorylate both the backbone and the excised DNA, then ligated with the PCR product from pSPIN. The ligation product was transformed into NEB 5-alpha Competent E. coli. Colonies growing on kanamycin with this new construct (pMADRID) were screened using colony PCR [Fig. 4]. Positive samples were grown in liquid cultures and the plasmid was isolated in order to use Sanger sequencing to verify successful cloning [Fig. 5]. 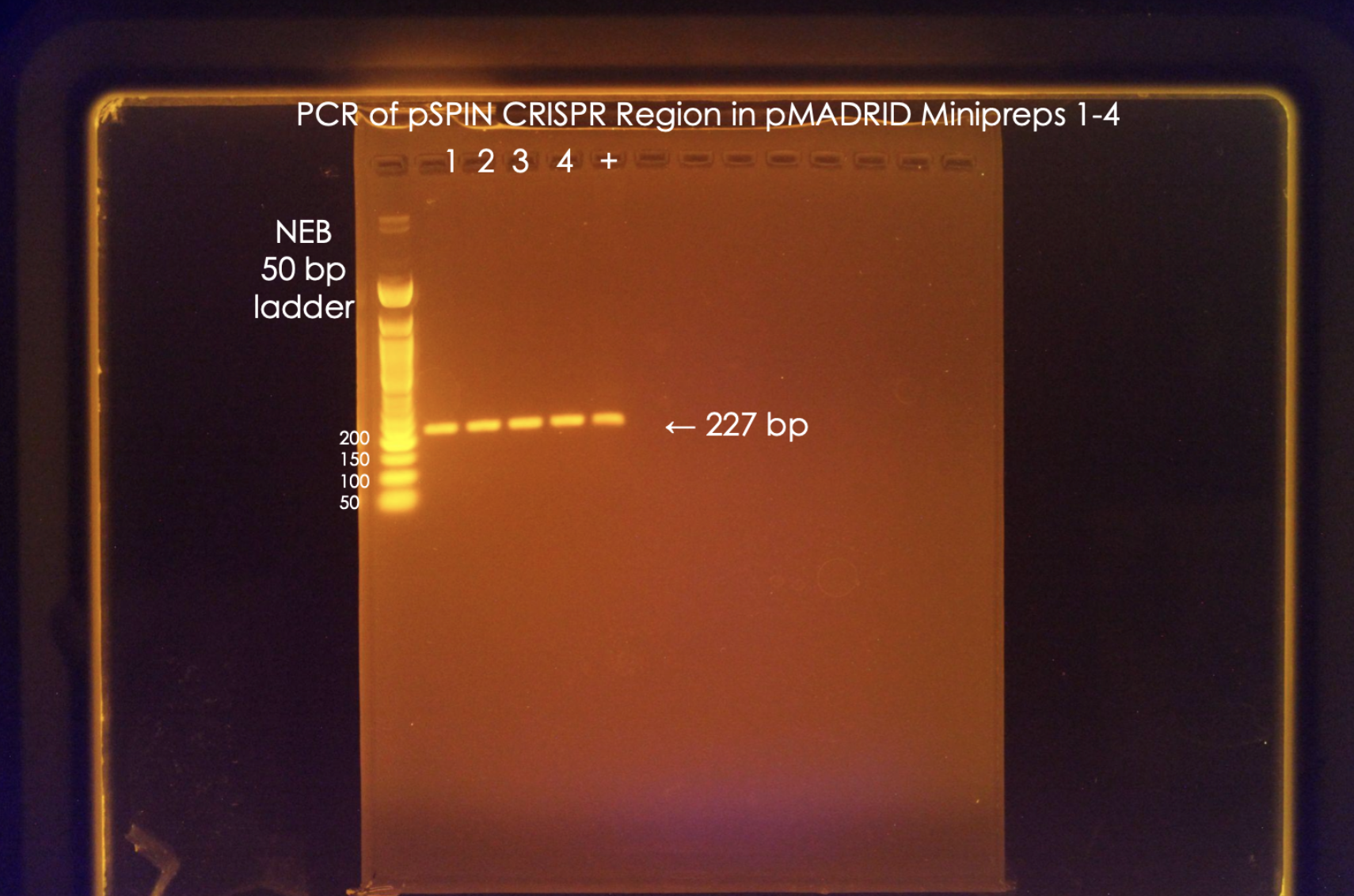 Figure 3: A 2% agarose gel depicting the expected PCR product from the pSPIN BamHI-DR-BSAI-gRNA-BSAI-DR-SalI region. The bands are the expected 227 bp length, and these fragments were used as the insert to assemble the pMADRID construct from pSPAIN. 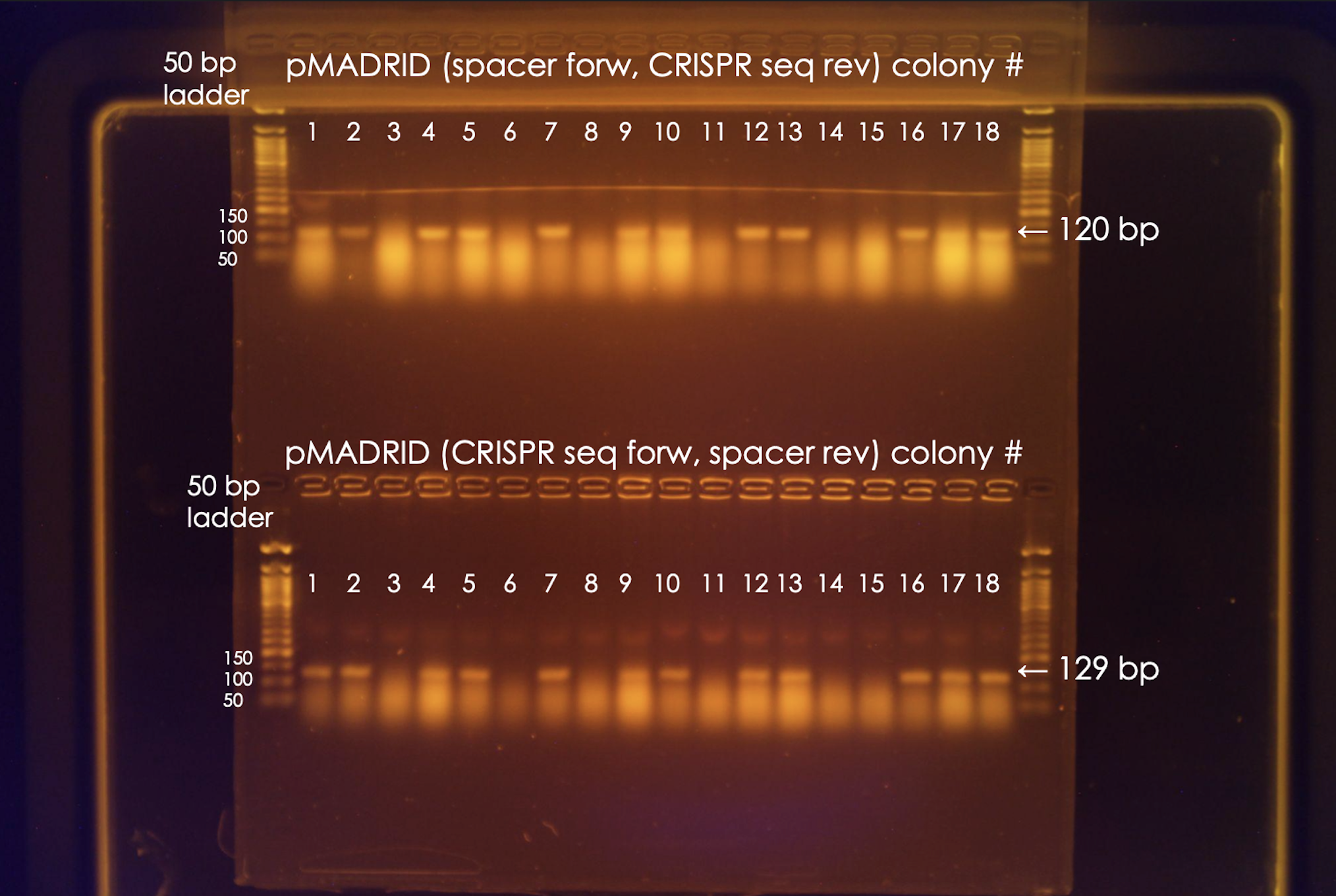 Figure 4: A 2% agarose gel showing the colony PCR products from pMADRID assembly transformant colonies. With primers that bind to the pMADRID-specific spacer, the presence of a band indicates the presence of a properly assembled pMADRID construct. We miniprepped six positive samples and verified successful cloning with Sanger sequencing.

Figure 5: A screenshot of Sanger sequencing reads (forward and reverse) for the pMADRID CRISPR array. This image is zoomed into the CRISPR array to show that the 32 nt. spacer was successfully replaced with the expected BsaI placeholder sequence. The rest of the reads agreed with the reference sequence. Figure made with Geneious Prime.

We made three attempts at cloning into pMADRID’s BsaI spacer using Golden Gate assembly, however we were unsuccessful. In our first attempt, we digested pMADRID and mcherry-targeting spacers (32 bp) with BsaI and ligated the fragments in a one-pot reaction with a one-insert incubation protocol. The assembly mix was transformed into homemade chemi-competent DH5α cells and no transformants grew. Our second attempt involved a cycling incubation protocol that favors digestion and ligation in separate cycles (37℃ for digestion and 16℃ for ligation), however no transformants were observed.

Finally, we successfully assembled mcherry-targeting by substituting our BsaI gBlocks with hybridized oligonucleotides that did not require digestion at all, and had no end fragments that got in the way of ligation. We mixed two oligonucleotides with 34 bases of complementarity corresponding to the 32 nt mcherry-targeting spacer and two extra bases corresponding to the V. cholerae repeat. The oligos included four extra bases on their 5’ ends that were able to anneal to the overhangs on the vector left behind by the BsaI. The oligos in the mixture were phosphorylated with T4 PNK, then heated to 95℃ for 2 mins and allowed to slowly cool at room temperature. These hybridized oligoduplexes were mixed with digested pMADRID and ligated for 30 mins at room temperature. The ligation product was transformed into NEB 5-alpha Competent E. coli. Colonies growing on kanamycin with this mcherry-targeting construct (pMINT) were screened for using colony PCR. Potentially positive samples were grown in liquid cultures and miniprepped, and successful cloning was verified with Sanger sequencing [Fig. 6 and 7].

Sequence-verified pMINT-Guide-2, pMINT-Guide-3, and non-targeting (NT) pMADRID were transformed into our model DH5α-mcherry cells and plated on kanamycin for 24 hours. Resulting colonies and DH5α non-fluorescent cells were grown up in liquid culture for 16 hours and analyzed on the Spectramax ID3 plate reader to determine relative fluorescence. Decrease in fluorescence was observed utilizing a plate reader, fluorescence microscopy, and flow cytometry, where DH5α non-fluorescent cells were compared to three replicates of DH5α-mcherry cells transformed non-targeting pMADRID, pMINT with guide 2, and pMINT with guide 3.

Figure 8 shows a plot of relative fluorescence units for non-fluorescent cells and cells transformed with pMINT, pMINT guide 2, and pMINT guide 3. We saw significant reduction in fluorescence for our mcherry-targeting constructs, indicating that guided-DNA integration into the promoter of a gene successfully knocks out expression. Figure 9 shows pictures taken of DH5α-mcherry cells transformed with non-targeting pMADRID and pMINT guide 2 under a microscope. The top two images show the non-targeting transformants under different light conditions, and the bottom two images show the pMINT guide 2 transformants under the same conditions. We see a similar amount of cells in both streaks, but the targeting constructs resulted in a decrease in fluorescence. 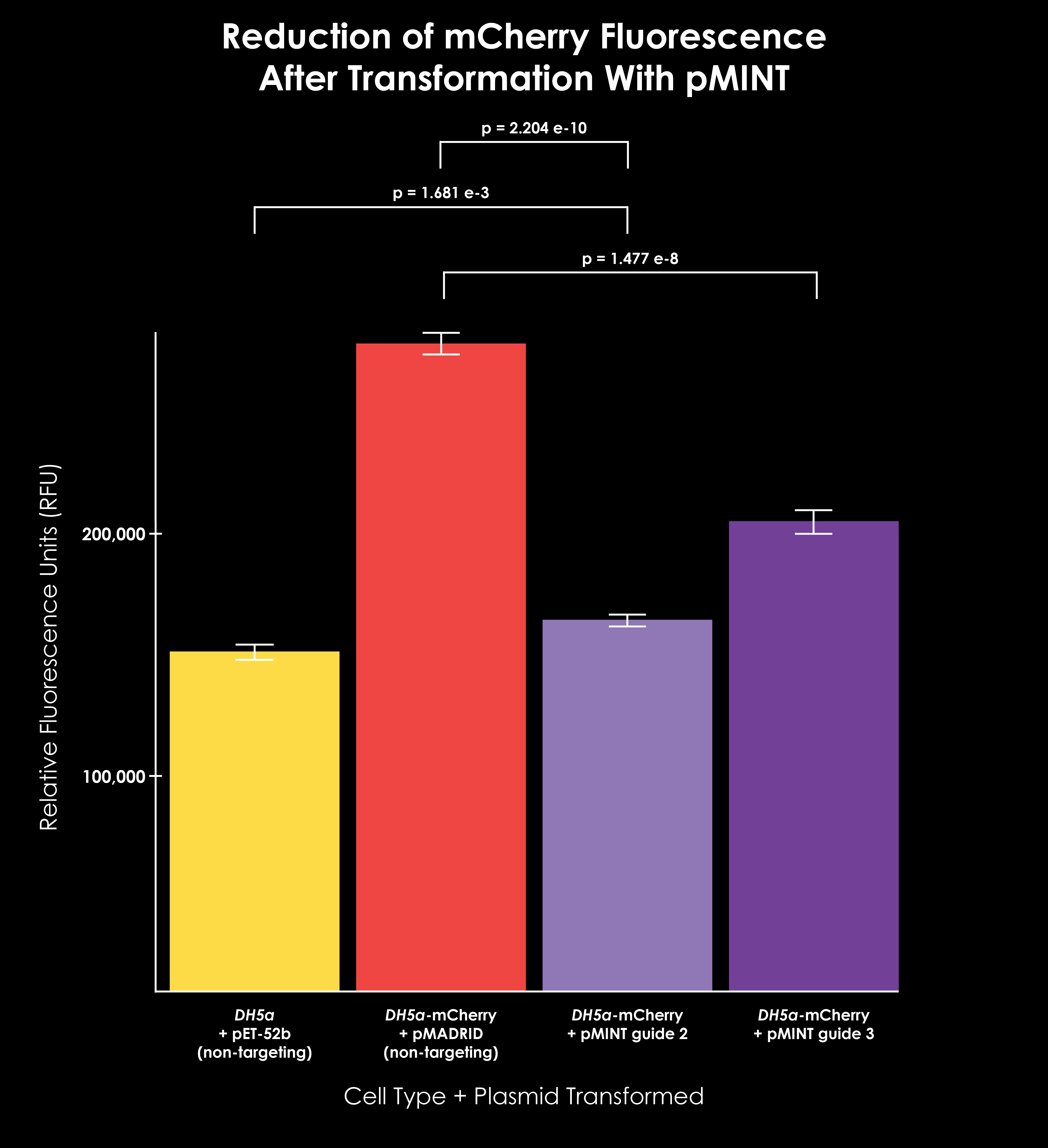 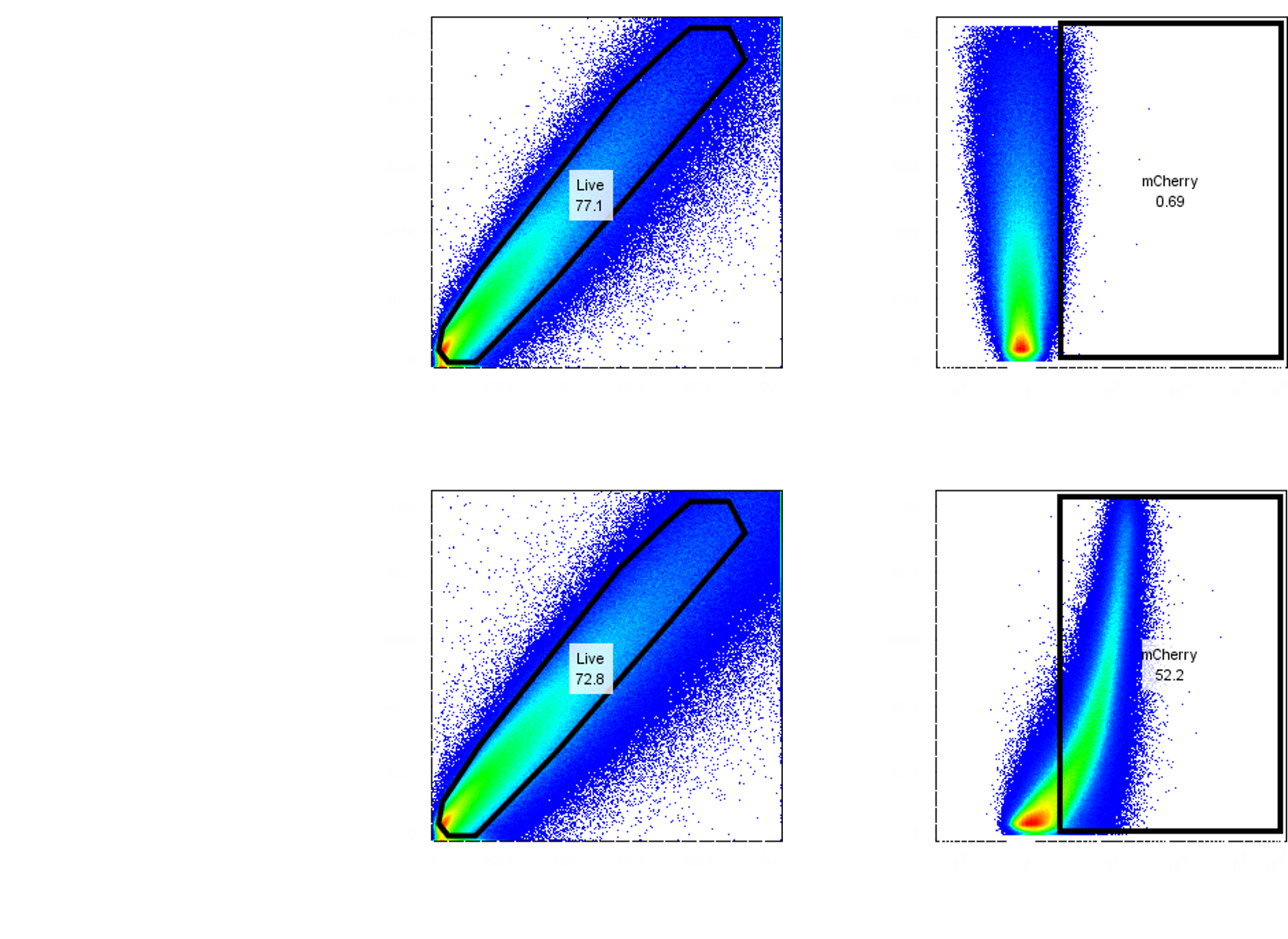 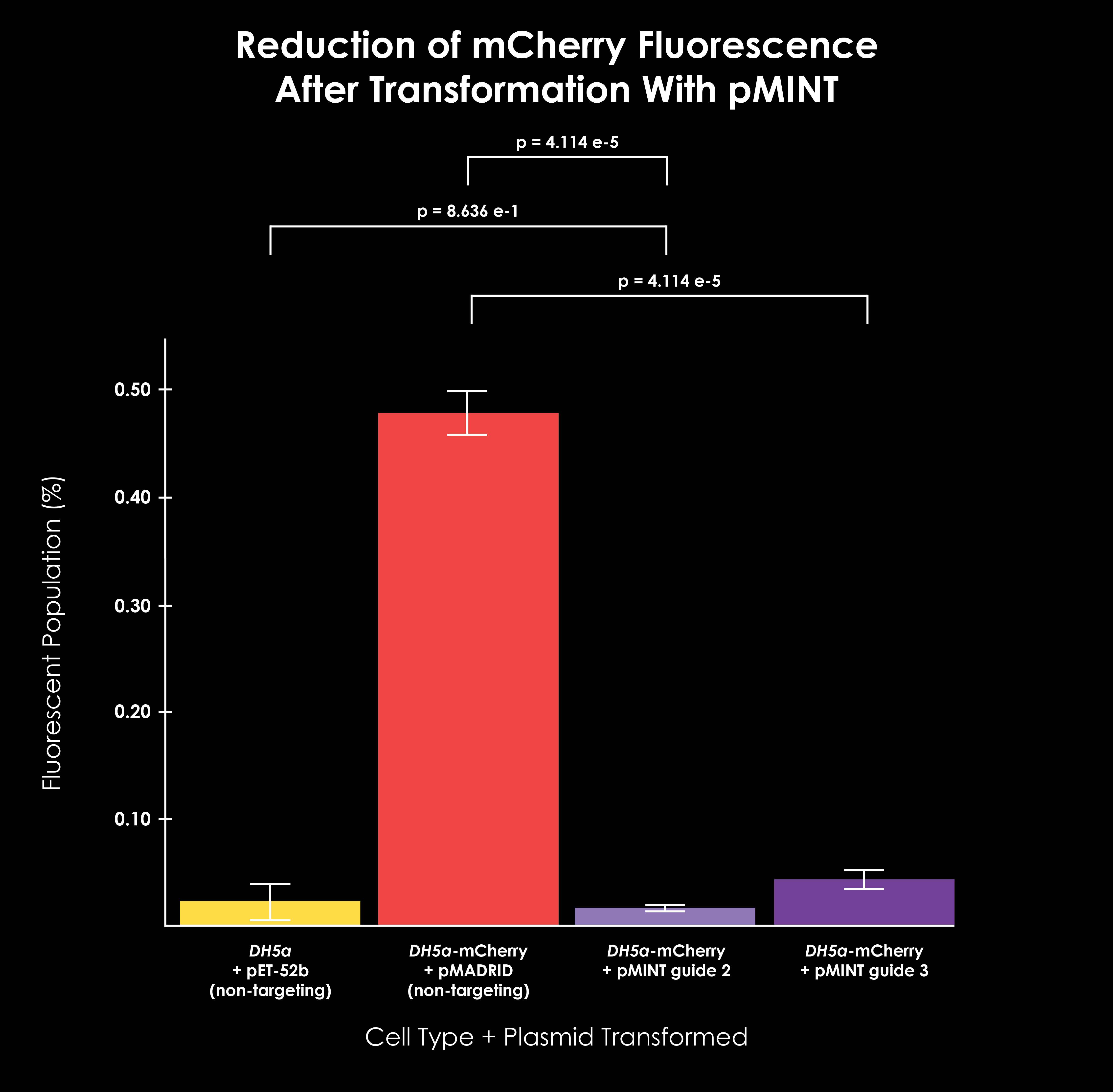 After verifying our pMINT constructs and testing them against our mcherry model cells, we used Golden Gate assembly to build two phagemid plasmids. Using around-the-horn PCR with primers containing BsaI sites on their 5’ ends, we amplified the INTEGRATE gene cassette from pMINT for use as a backbone in Golden Gate assembly.

The first phagemid, termed φMINT, was assembled using an f1 ori gBlock for M13 phage packaging and a chloramphenicol resistance gene (CmR) to replace pMINT’s kanamycin resistance gene. The second phagemid, termed φMINTO, was assembled using an f1 ori, CmR, and an oriT specific to the F’ DH5α strain from NEB. The addition of an oriT should allow the phagemid to be conjugated by cells infected by the M13 phages.

These phagemids were assembled using a one-pot Golden Gate reaction with BsaI and a cycling protocol that cycled between 37C and 16C. The assembly was transformed into chemically competent DH5α and transformants were plated on chloramphenicol plates to select against unmodified plasmids. Transformants growing on chloramphenicol were grown up, miniprepped, and analyzed with gel electrophoresis [Fig. 12]. In the future, we plan to sequence these constructs with NGS. 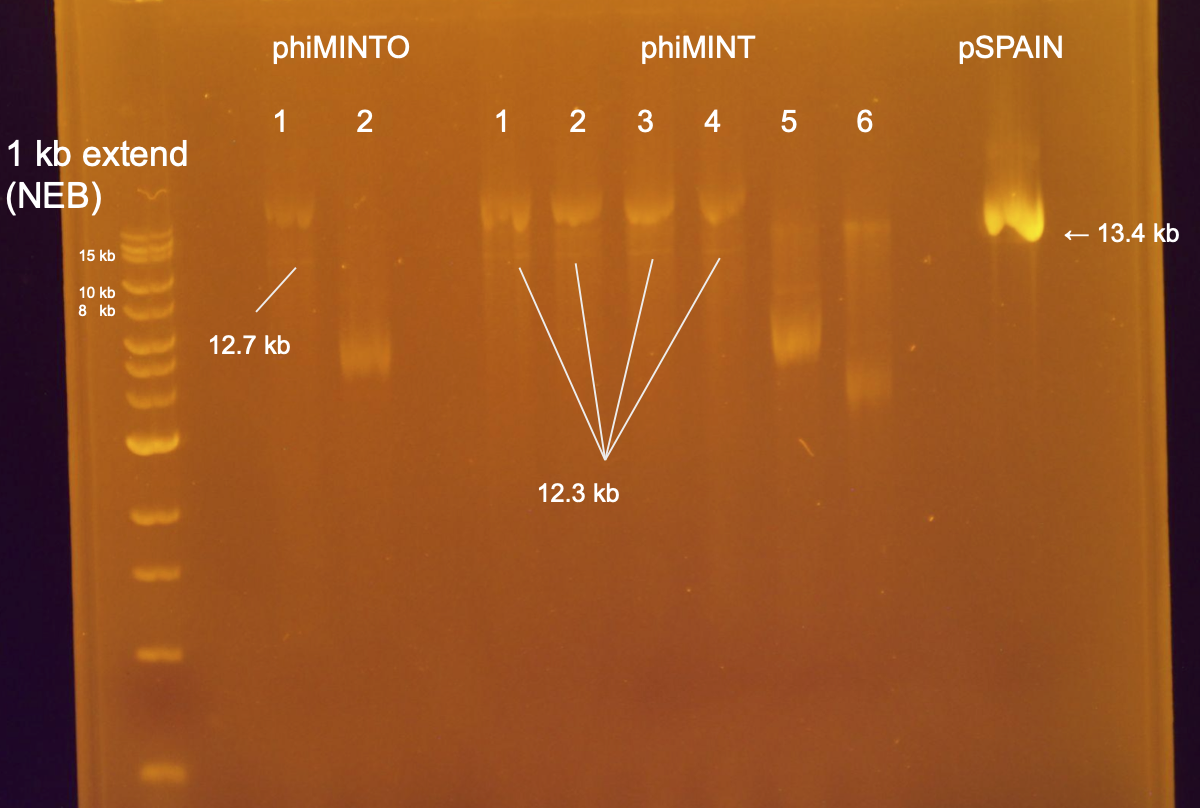