Demonstrate our engineering success in a part of our project.

The iterative engineering process is the core method used by any iGEM team to create their final product. During our brainstorm phase, we have known that we wanted to make an overexpression system for enzymes as enzyme yield problem is still an obstacle in national enzyme industries. We thought we would be able to test the parts in the registry utilizing the outer membrane proteins, specifically the eCPX. But the eCPX available on the registry lacks the linker that we need to attach our enzymes of interest, in this case the blue chromoprotein amilCP. Therefore, we have to design our own circuit to fulfill our goals for this project.

Aside from the technicality based on our own reflection that we need to improve our system, our integrated human practices also play a huge role in our iteration cycle. The needs for a higher yield expression system while still considering an easier and cost-effective system becomes a priority that we need to do.

On the first design stage, we designed two different kinds of constructs in two different standard iGEM plasmids, the pSB1C3 and the pSB1K3. As the proof of concept, we use the blue chromoprotein gene (BBa_K592009) as our protein of interest. Because we want to make a fusion of the outer membrane protein or eCPX with the PoI, we insert the TEV protease-specific linker site and the eCPX gene sequence after the blue chromoprotein. We also added a strong universal promoter at first because in the beginning of our project, only BL21 is available in our lab but we still kept looking for BL21(DE3) for higher recombinant protein expression. We also added double stop codon at the end of our design.

The considerations when we design our circuits are:

Because we need TEV protease for our specific linker, we also needed to design another construct containing the TEV protease gene itself. We are using a different plasmid than the first one. For the TEV protease, the pSB1K3 plasmid which has the resistance for kanamycin antibiotic is used.

The sequence inside the pSB1C3 with chloramphenicol resistance is the eCPX-amilCP fusion. At first, we were planning to integrate our system to several microorganisms, those are the E. coli BL21, E. coli BL21(DE3), E. coli JW0729-3 with a hypervesiculating ability, and the C. violaceum (from iGEM UGM_Indonesia) to test our system into another chassis and also as a form of our partnership with the UGM team. But due to the time limit, we were only able to test our systems on the E. coli BL21 and BL21(DE3) yet we are still hoping to be able to express our systems on the strains in our initial plan for the future prospect.

While waiting for the T7 promoter specific for BL21(DE3), we were using the universal expression of promoter.

Synthesizing both genetic circuit with T7 promoters in order to try it in the E. coli BL21(DE3).

All of our gBlocks have the right length yet we still haven’t been able to properly assemble the insert to the plasmid backbone. This is analyzed from the presence of colonies that is grown on the petri dish yet do not release the colour blue as it is supposed to be due to the insertion of amilCP gene sequence. We redesign our primers for the insert to be more specific.

On the testing stage, we induced the transformed colonies with lactose in the hope that it will produce the colour blue. The test will be successful if the spectrophotometer shows the colour blue is present on the media along with the cells. This confirms that the cells produce the blue color from the eCPX-EoI fusion. While to confirm whether the EoI is still intact with the eCPX, we might need to do an SEM and TEM analysis. But due to the time limit, we might not be able to conduct this. 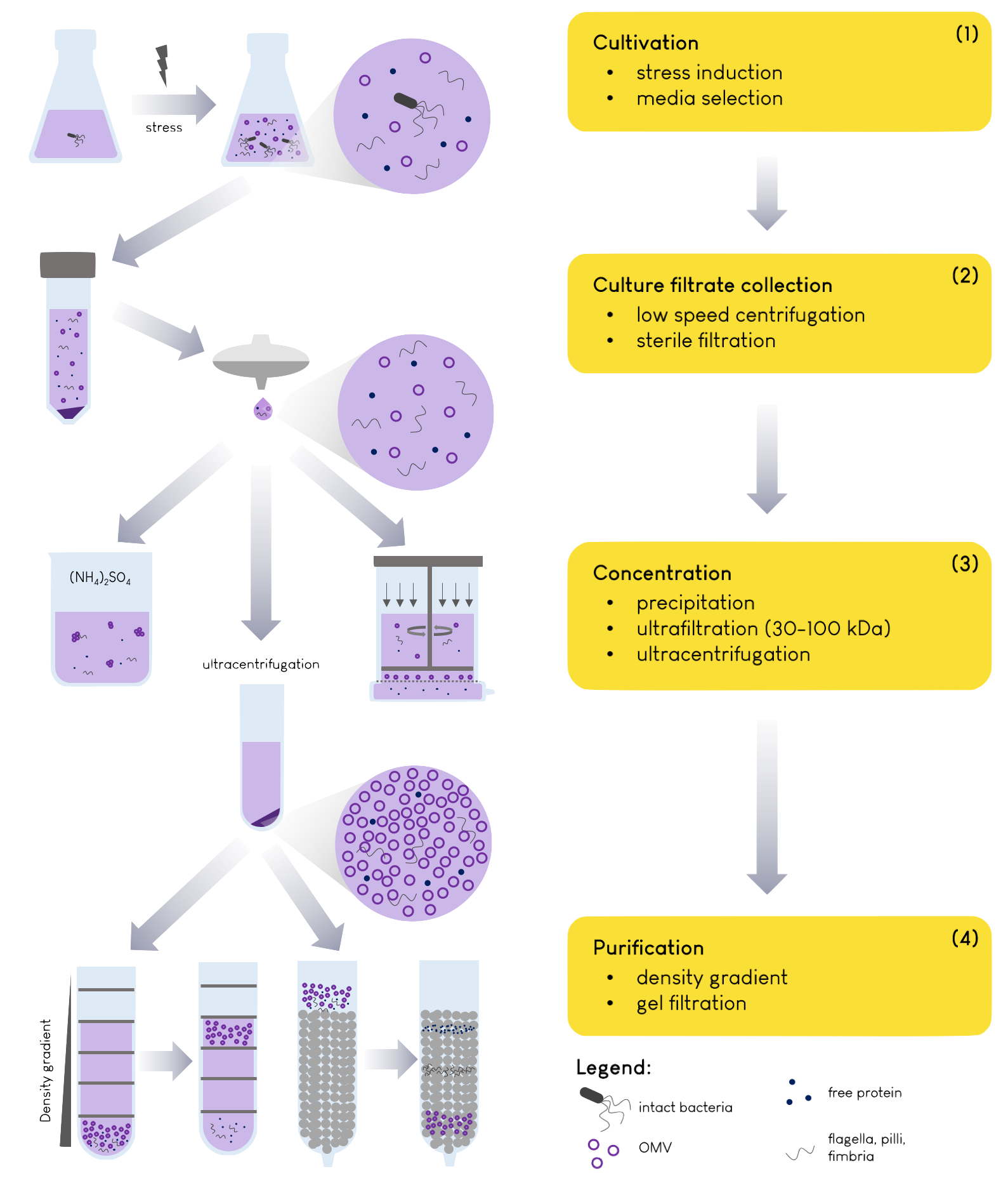 From the picture, there are separated fractions, the vesicles and the pellet. The vesicle fraction that is clean can go through selective release. Thus, the yield would be much cleaner. The pellet can be added with TEV protease for selective release of outer membrane protein still on the cell membrane (on-pellet digestion). The on-pellet digestion is also a highlight of our project as it needs only a minimal amount of media just sufficient for resuspending the cells. The live cells from this process can be reused for another process.

There are two ways enzymes can be produced, intracellularly and extracellularly. Intracellular enzymes would be more difficult to recover as it would need cell disruption and need to be separated from the cellular impurities. Enzymes produced intracellularly would also be limited due to the host size and space inside of the cells. While extracellular enzymes would be diluted if the protein of interest directly gets released to the media, therefore would reduce the yield and need significant concentration before being able to be used (Arbige, 2019).