Making science accessible is a challenge because disabilities are varied, so there is no one-size-fits-all formula to meet this challenge. We thought the best way to address this issue was to talk directly to someone who is affected. 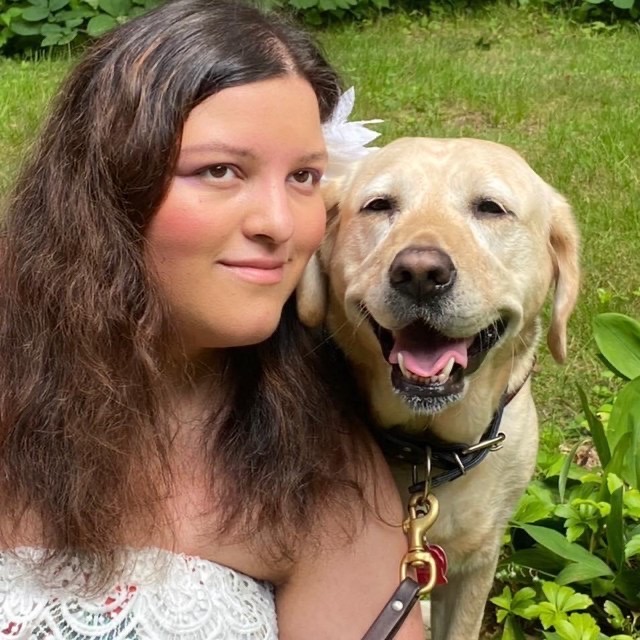 Figure 1: Bella and her dog O'Hara. [Photo description: Bella is posing with her service dog O’Hara, a golden labradoodle].

We met Bella, a 22-year-old student who does TikToks on her service dog O'Hara. Bella wants to show that people with disabilities are all different and that they are all capable of great things. She is also on a mission to raise awareness about service dogs and how to deal with them. One aspect that she doesn't really talk about on her social media, but that particularly caught our attention, is her daily life as a science student. For us it was really important to shed light on Bella’s story using our platform as we find it really inspiring. Giving people with a disability visibility is also a great move toward a more inclusive world. Bella really emphasized during her interview on the fact that often inappropriate behavior toward her and her guide dog came from ignorance and that people needed to be more educated. We hope that hearing her story through our interview will help people choose to make their scientific projects more accessible to all.

Overall, the main conclusion of our interview was that it is necessary to adapt to each person with a disability, as each person has their own way of understanding disability. To facilitate the accessibility of our events, she gave some tips that could be easily implemented:

Another aspect is also the accessibility of scientific content whether it is on websites or on social media. There again description is key, Bella suggested adding Alt Text or description to pictures on posts. These would then be read by an app used on blind people’s laptops and phones. Each of our posts on social media have alt text and we added a description to all of the images on the wiki. This was the easiest thing to implement!

Historically, women were considered intellectually and emotionally unfit for scientific work on a par with men. For this reason, for centuries they have not had access to the same education. Some women have nevertheless managed to gain access to knowledge over the years and have been able to hold scientific positions [1]. However, history has forgotten them…

Today, 30% of the world's researchers are women[2]. According to the Ministry of Higher Education, Research and Innovation, in 2020, women will occupy 28% of research positions, even though there are more women than men with science degrees[3].

Today, girls are not always supported and encouraged to study science. When they do, the disciplines they study, such as biology or medicine, are often considered minor and less prestigious than the scientific disciplines still predominantly studied by men, such as computer science, physics, chemistry and mathematics. Moreover, women researchers specialising in these disciplines are rarely recognised and their work rarely valued. This is reflected each year in the awarding of the Nobel Prize and the Fields Medal[4][5].

The inclusiveness of women in science was one of our communication priorities. We realised that women scientists, although numerous, were poorly represented in the media and therefore little known by the general public.

Each week, we shared stories on our Facebook and Instagram accounts called "Women In Science". In this way we highlighted 19 women scientists. These stories allowed us to show the diversity of these women around the world from various cultures. 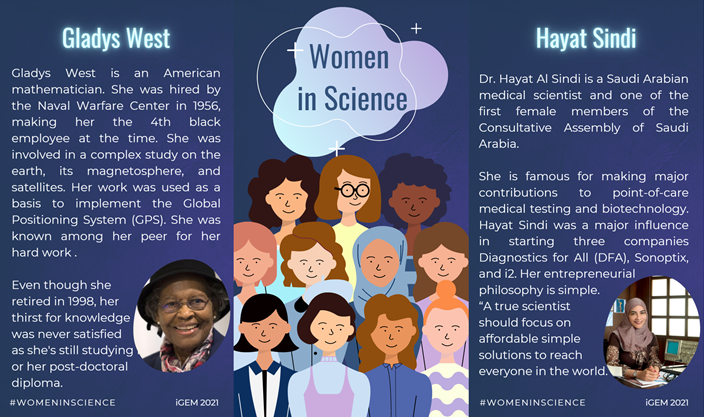 Figure 1: Presentation of two scientists in the framework of "Women in science”. [Image description: 3 images. The middle image, under the title of our "Women in Science" story series, features 11 women from different backgrounds drawn. The image on the left is a screenshot of the Instagram story about Gladys West with a short introduction about who she is and what she has done that is remarkable. At the bottom right of the story is a photo of her. The image on the right is a screenshot of the instagram story on Hayat Sindi with the same type of content as the one on the left].

For us, education and scientific communication was very important. So we often addressed children to transmit their curiosity about science and the desire to do it. During these kinds of events and especially when we did science workshops in schools, it was the female members of our team who led these workshops. The aim was to show girls and young women that they can study science and become scientists too. It was an opportunity for them to be with women scientists for once. Thus, they saw that the association "Science and Women" was possible. It is hoped that this has encouraged these girls to pursue their dreams of becoming scientists in the future.

In addition to our stories and workshops, we had the pleasure of participating in the collaboration proposed by the iGEM Patras team and Concordia: The Rosalind Chronicles .

Each participating team shared with the others a short presentation of a woman researcher of their choice. It was noted that the number of female researchers around the world is such that no team presented the same researcher as another team. It was therefore an opportunity to discover the diversity of these women because they are inspirations for all the young girls who will be the future scientists of tomorrow.

This collaboration was also an opportunity to see that the iGEM competition is an example to follow in terms of women's inclusiveness. Our own team is 70% female and we have seen that the teams are also very female. At our level, we are an example for others. As students we can participate in a scientific competition with an international scope.

We wanted to highlight women scientists and thus deconstruct the stereotypes that women cannot study science and cannot be scientists.

By multiplying this kind of approach, by exposing women scientists in the media, by making them known to the general public, especially to young girls, and by recognizing their work, we will one day achieve gender parity in the scientific world.