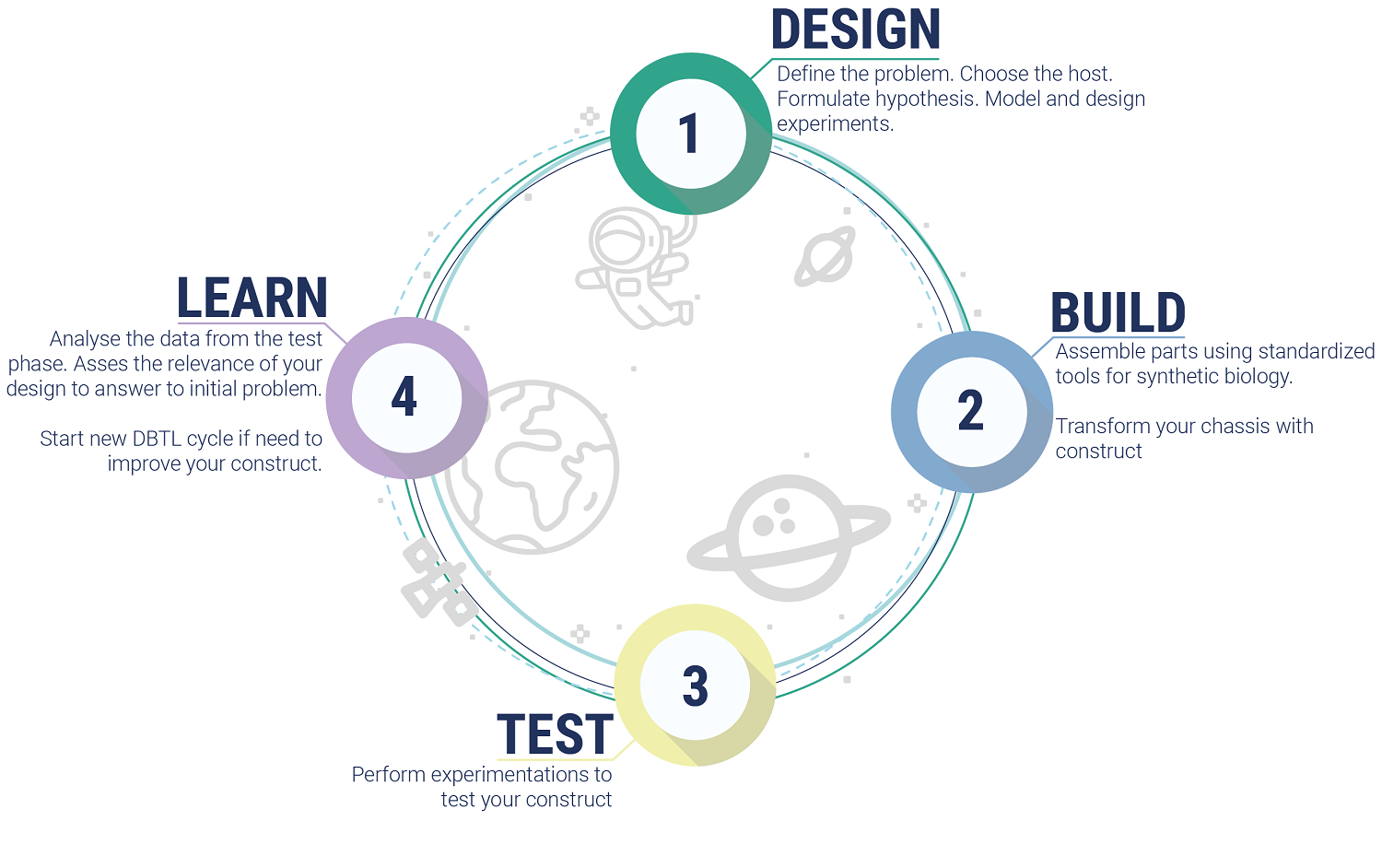 Our research led us to Deinococcus radiodurans, one of the most radiation-resistant single-cell organisms known to date[1]. Among the different active and passive mechanisms used by D. radiodurans, we were interested in the one highlighted in the article by Gupta S, et al. (2016)[2]. It demonstrates the role of amino acids, peptides and Manganese present in the ultrafiltrate of this bacterium in the resistance to radiation. A synthetic decapeptide, with protein sequence DEHGTAVMLK, inspired by the most common amino acids found in the ultrafiltrate of the organism, has been shown to protect against radiation in the presence of both manganese and orthophosphate when these three elements combine to form the so-called Manganese decapeptide complex (MDP), in both in vitro and in vivo models.

Figure 2: MDP complex protects mice from lethal doses of radiation. The Manganese-Decapeptide-phosphate complex injected into mice allowed them to survive lethal doses of gamma radiation. The same radioprotective effects have been proven on human cells in culture and enzymes in vitro. [Figure description: On the first panel the mice was injected with a placebo, it dies after exposure to radiation shown by the radioactive icon. On the second panel the mice is injected with the peptide and survives the exposition to radiation]

This is the strategy we have chosen to make Chlamydomonas reinhardtii resistant: thanks to genetic engineering it should express the decapeptide constitutively, while manganese and orthophosphate will be present in the medium at concentrations sufficient to form the MDP.

How to express this decapeptide constitutively by Chlamydomonas reinhardtii? The peptide that we want to express by our alga is of protein sequence DEHGTAVMLK, but the translation being always initiated by the AUG codon and thus by a methionine, we could not express this sequence without an adapted design. Firstly, the possibility of expressing our decapeptide after protein cleavage, thanks to the upstream addition of sequences recognized by proteases endogenously present in Chlamydomonas reinhardtii (such as the CtpA peptidase)[3] was ruled out. Indeed, this will leave a scar on the final peptide that may alter its function. 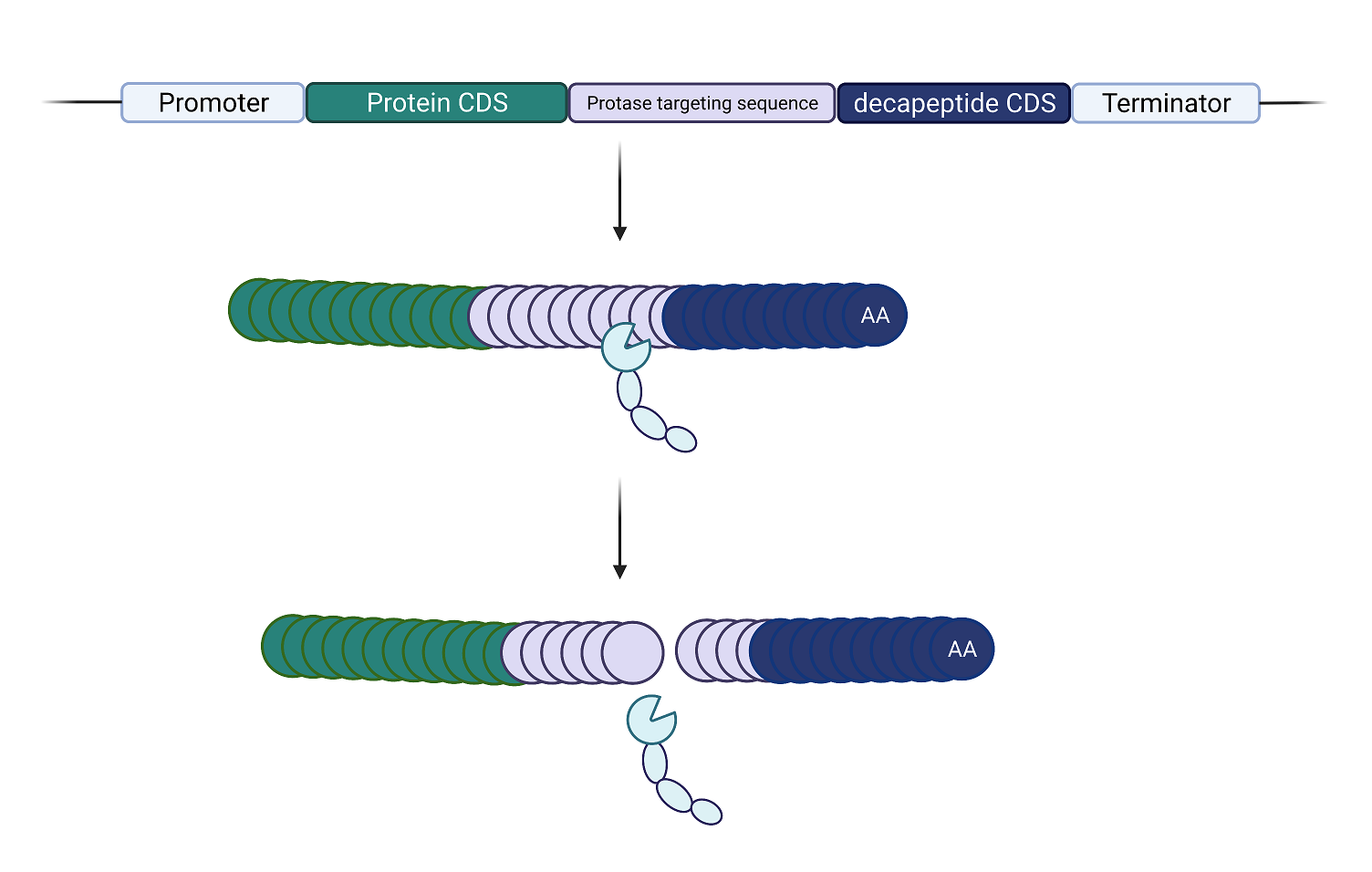 The use of so-called "P2A" sequences allows the expression of two proteins with a single translation initiation. Indeed, this sequence allows the ribosome to perform a translational jump, thus giving two distinct proteins[4]. These strategies were discarded because of the scars: amino acids left by these constructs to our decapeptide. The amino acids added to the decapeptide sequence, if our protein was expressed using protein cleavage, are too numerous and would strongly alter the role of our peptide, so this strategy was discarded.

Figure 4: Expression strategy using “2A self-cleaving peptides”. The expression strategy using "2A self-cleaving peptides" due to the addition of a proline upstream of the decapeptide coding sequence. Proline is not a major amino acid found in D. radiodurans ultrafiltrate. [Figure description: Insertion of a 2A site results in two proteins during translation. However, this leaves some traces: parasitic amino acids that should probably alter the function of the decapeptide].

In the case of using a P2A sequence, a proline would have been placed at the beginning of the decapeptide sequence, but proline is not a major amino acid found in D. radiodurans ultrafiltrate, so it could have potentially denatured the ability of our peptide to complex with manganese and orthophosphate. It was therefore decided to simply add a methionine at the beginning of our protein sequence. Indeed, methionine is one of the amino acids most frequently found in Deinococcus radiodurans ultrafiltrate, unlike proline1. We can therefore hypothesize that this addition will not disrupt the formation of the CDM complex. This hypothesis will be confirmed in proof-of-concept experiments. The sequence of the peptide expressed by Chlamydomonas reinhardtii is then MDEHGTAVMLK, which we will refer to as undecapeptide. This undecapeptide assembles with manganese and orthophosphate to form the MUP (Manganese-Undecapeptide-Phosphate) complex.

Figure 5: Decapeptide with an upstream methionine. [Figure description: The decapeptide will be expressed with a methionine before its sequence, it will henceforth be named undecapeptide.]

Once the protein sequence was determined, the next step was to find the nucleic sequence coding for our peptide sequence, indeed the codons must be optimized for an expression in C. reinhardtii, we determined the sequence thanks to the MPI Bioinformatic Toolkit (https://toolkit.tuebingen.mpg.de/#/tools/backtrans) : ATGGACGAGCACGGCACCGCGGTGATGCTGAAG.

We ordered this sequence from Eurofins® who synthesized it. This sequence contains sites recognized by restriction enzymes compatible with our synthetic biology kit.

To express our undecapeptide, the coding sequence will be transcribed thanks to the regulatory sequences of the PSAD gene, known to be highly expressed in C. reinhardtii: upstream will be added the promoter and downstream the terminator.

To select the algae that will be transformed by our genetic construction, we add to it a gene expressing constitutively the AphVII protein conferring resistance to hygromycin. Thus, after transformation, the algae will be spread on a medium containing hygromycin and only those having received the construction will be selected.

To perform all these genetic constructs we used the synthetic biology kit for Chlamydomonas reinhardtii published in 2018 named ModularCloning (MoClo)[5].This system is based on the Golden Gate technology, developed in 2008, using type II restriction enzymes. These enzymes produce cohesive ends, in order to generate plasmid constructs that no longer have the recognition sites and thus allow the restriction and ligation steps to be performed in a single reaction. Thanks to this technique, it is possible to assemble in one step many standardized bricks into a functional unit by exploiting the generation of complementary cohesive ends between the different types of elementary bricks of level 0. Indeed, each elementary part (5'UTR, promoter, coding sequence...) is inserted within two sequences recognized by type IIs restriction enzymes, generating compatible fusion sites between the elementary parts that assemble into functional units at level 1 (genes) that can in turn assemble into systems: level M [6][7][8]. 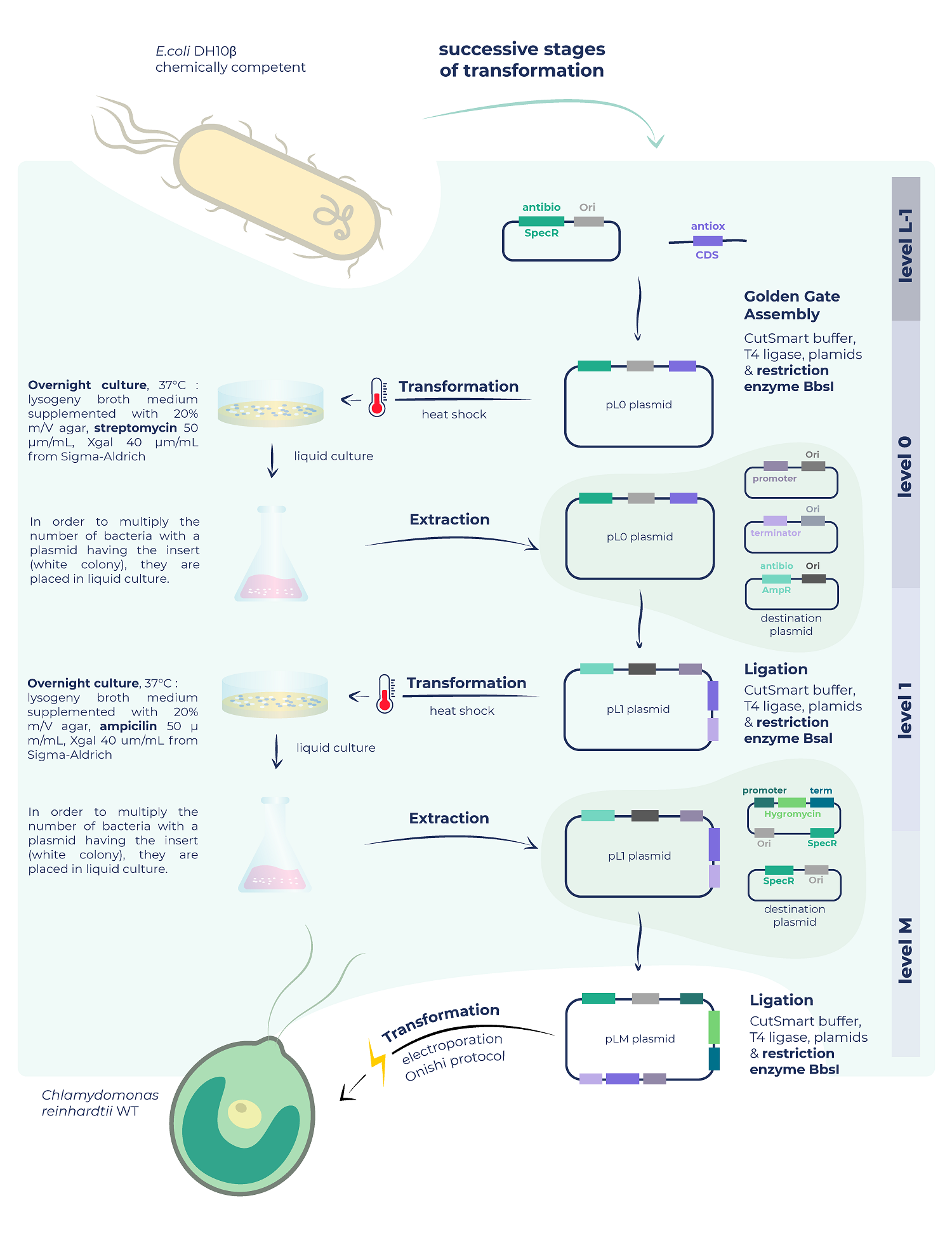 Figure 7: Schematic visualization of the final plasmid construction and transformation of C. reinhardtii. [Figure description: Our Antiox CDS encoding the undecapeptide is cloned with the BbsI restriction enzymes into a receiver plasmid to form the level 0 plasmid. It is then used with other level 0 plasmids providing a strong promoter and a terminator to form a level 1 plasmid containing these three inserts using the BsaI enzyme. This level 1 plasmid is, together with another level plasmid containing a gene conferring hygromycin resistance, assembled into a final level M plasmid using the enzyme BbsI. Once this final plasmid is obtained, it is linearised by the EcoR1 enzyme and transformed into the nuclear genome of C. reinhardtii by electroporation. Each molecular cloning step is followed by a bacterial transformation step, liquid culture amplification and plasmid DNA extraction]

The level 0 parts are defined by the single stranded sequences obtained after digestion by type IIs restriction enzymes, these determine the position of the brick within the transcriptional unit. The positions go from A1 to C1 and our coding sequence takes the position B3-B5.

Figure 8: Schematic representation of the different positions that the elementary bricks of MoClo can take. The coding sequence of the undecapeptide is at position B3 to B5. [Figure description: The synthetic biology kit each brick can take different positions: promoters are in position A1, A2, A3; CDSs for example have a position B2, B3, B4 and B5. Each position is defined by a sequence of 4 nucleotides which becomes a ligation site after using type II restriction enzymes.]

The antibiotic resistance gene chosen is AphVII, a gene conferring resistance to hygromycin[9]. This will be integrated into the final plasmid next to the transcriptional unit allowing the expression of the undecapeptide.

The plasmid constructs are amplified and selected by transforming them into E. coli bacteria.

Once our M-level plasmid was obtained and amplified, we linearized it by enzymatic digestion through the EcoR1 site and transformed it into the nuclear genome of Chlamydomonas reinhardtii by electroporation. The integration in the C. reinhardtii genome is random, the electroporation creates double strand breaks in the genome, the nucleic fragment having penetrated the nucleus can be integrated by chance, during the process of repair of the double strand breaks named NHEJ[10]. This process is illustrated in figure 8. 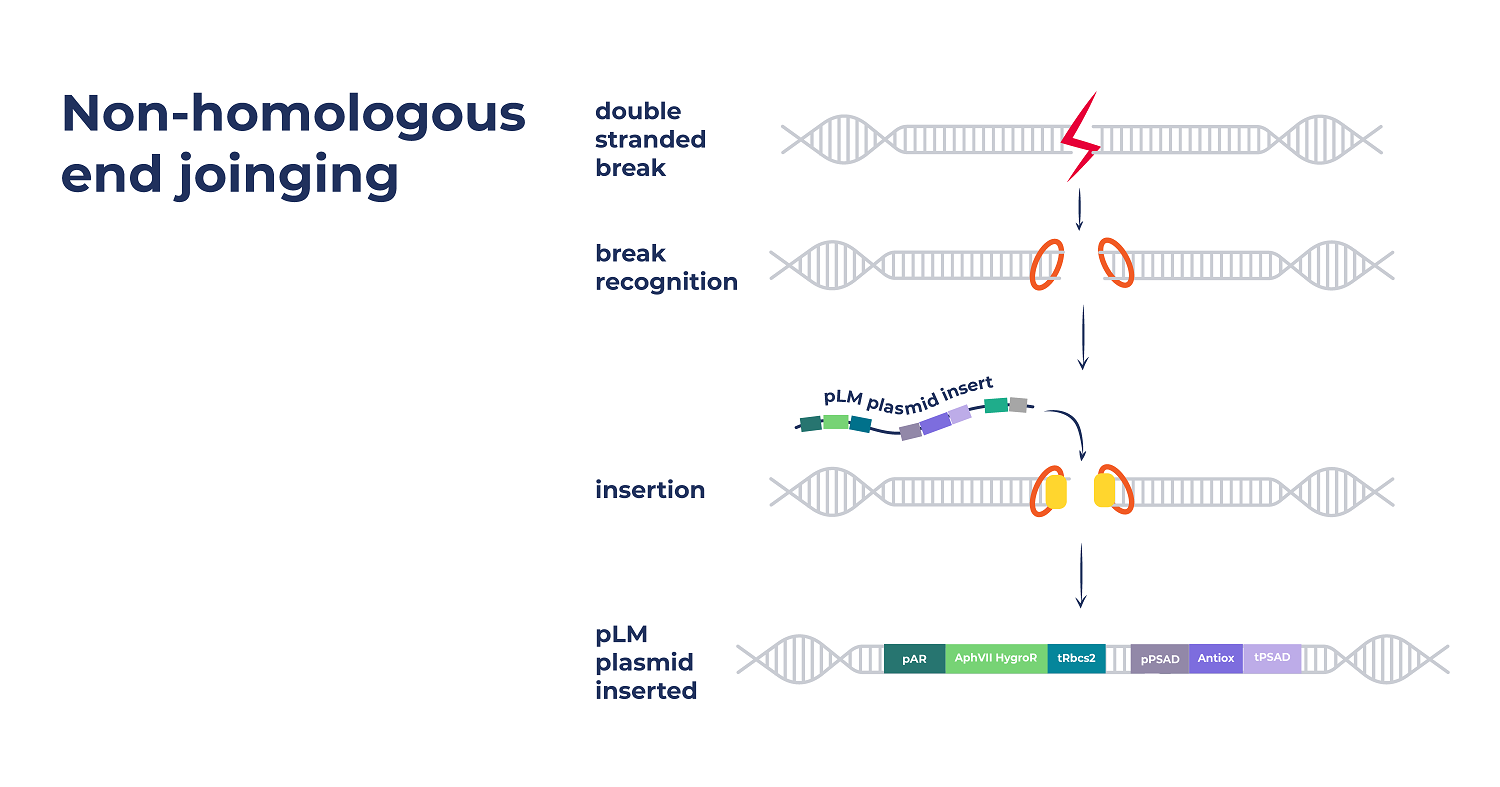 Figure 9: Schematic representation of the random transformation mechanism of C. reinhardtii. Double strand breaks are produced by electroporation in a random way on the genome. Note that nucleases can degrade the insert, and thus induce a partial insertion. [Figure description: The two DNA strands are broken. This allows the insertion of the insert from the plasmid.]

We obtained 43 clones transformed with our insert. But the hygromycin resistance phenotype is not sufficient to guarantee the expression of our undecapeptide, as the transformation mechanism introduces several biases. Moreover, the inserted DNA within C. reinhardtii can be attacked by endo or exonucleases, and if the part expressing the resistance gene is not altered by these nucleases, our clones will be able to grow in the presence of antibiotic while the sequence of interest may have been excised. Furthermore, even if the construct has not been degraded by nuclease, since the insertion of our genetic construct is random, it is possible that the genetic environment of the insertion position does not allow constitutive expression of our undecapeptide. In view of this, it is necessary to verify the expression of our peptide by RT-PCR.

In parallel to this verification, a phenotypic test was performed: the algae were subjected to a dose of H2O2 (2.5 mM) killing 63% of the non-transformed cells in 24h by incubating them with 1mM manganese. Their survival rate is evaluated after 24h.

Finally, the ability of the algal strains to resist gamma radiation was evaluated by exposing our samples to 50 and 100 Gy, then calculating the survival rate.

Our construct was indeed integrated into the Chlamydomonas reinhardtii genome, as evidenced by RT-PCR gel electrophoresis (figure 9). However, this PCR is not quantitative. A qPCR experiment on our mRNAs could have been done to characterize precisely which strains could express enough undecapeptide to confer radioresistance.

It is important to note that mRNA expression does not necessarily imply protein translation of our undecapeptide: it may be interesting to show the presence of our peptide directly with an antibody. 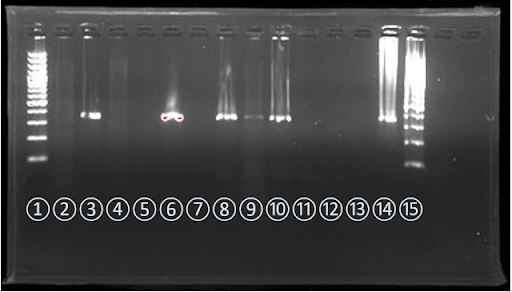 The results of H2O2 exposure were inconclusive regarding the efficacy of undecapeptide in Chlamydomonas reinhardtii. First, we encountered methodological errors in our H2O2 resistance test experiments. The cell counting technique using FDA (fluorescein diacetate, revealing live cells by labeling them with GFP) did not work because a large background appeared although no cells were present. Another method for calculating the growth kinetics of C. reinhardtii needs to be developed. The cells could be deposited in 96-well plates, and the kinetics can be followed by measuring the absorbance of the algal cultures over time. As the relationship between absorbance and concentration can be specific for each strain, it is first necessary to establish a regression curve linking absorbance and concentration of the cells of the strain of C. reinhardtii with which we work.

The design of the experiments must also be better conceived: it is necessary to carry out the irradiation close to the laboratory where the samples will be then treated. Indeed, the difficulties related to the logistics will be thus avoided. Moreover concerning the protocol of treatment of the samples after irradiation, it is necessary to make dilutions in larger volumes, to agitate vigorously before taking the volume to be spread, and to spread using adapted handles.