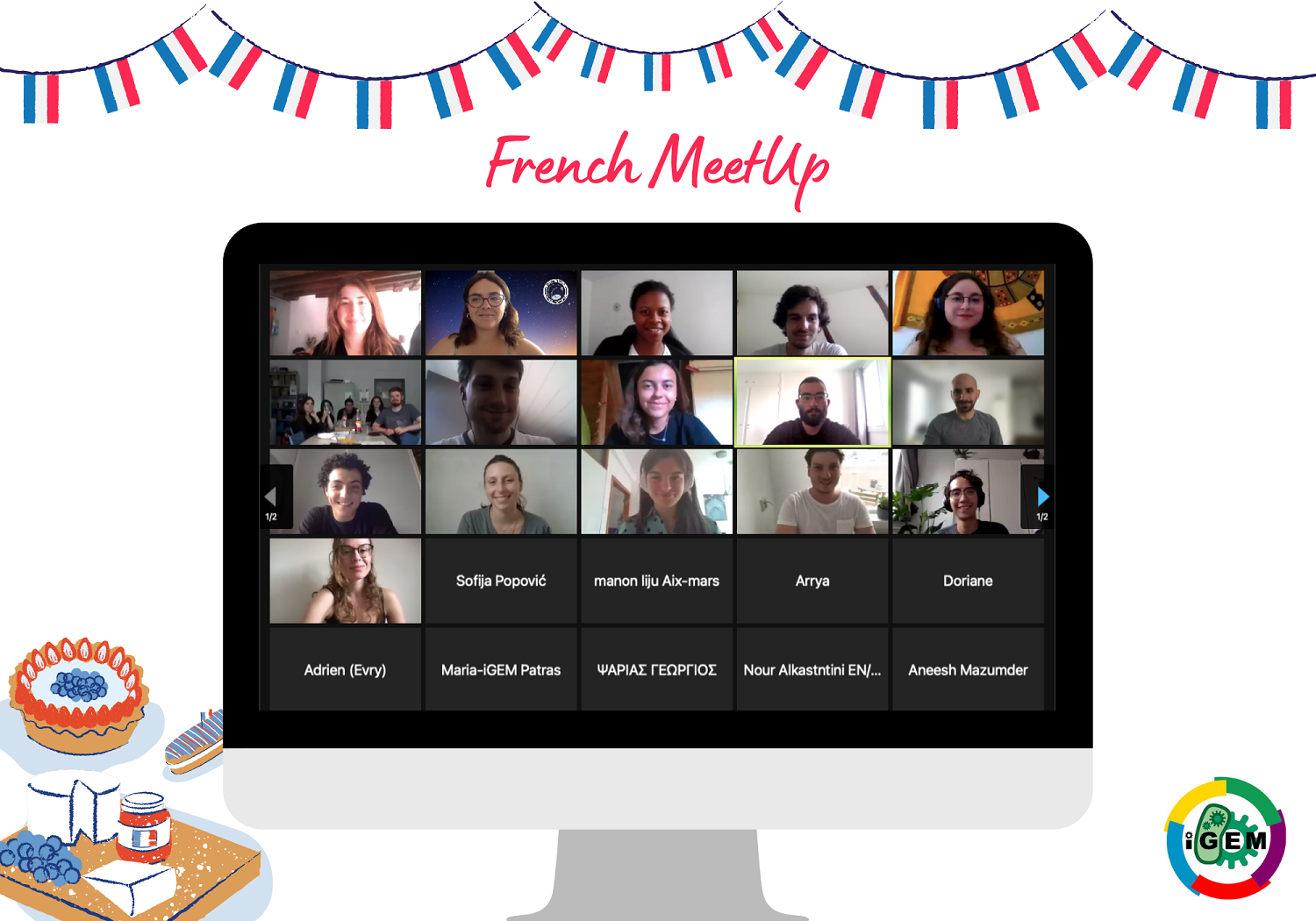 The french teams (IONIS, Bettencourt, UParis, Evry, Nantes, Aix-Marseille, INSA-Toulouse UPS, GO Paris-Saclay) first got together in May, it was the opportunity to get to know each other and talk about our project and the difficulties that come with it. We created a discord channel together to facilitate communication and mutual support. We then started to plan the French meetup.

On September 11th, the French teams hosted an online event. During this event, each team had the opportunity to present their project during a 10 minutes presentation. We also invited three speakers who gave diverse and complementary presentations.

The first speaker was Manish Kushwaha, a researcher in synthetic biology at the Micalis Institute (INRAe).

The second speaker was Elodie Chabrol, a freelance science communicator who dedicated her career to making science accessible to everyone and everywhere after a Ph.D. in neurosciences. Elodie Chabrol presented her main tips to communicate around science. From social media strategies to choosing the right words, this presentation was really insightful!

The last speaker was Patrick Torbey, the co-founder of Neoplant, a french startup that aims to use synthetic biology to build plants with a purpose: fighting air pollution. Patrick Torbey presented the current landscapes of startups in synthetic biology. It was a great opportunity to show how creative scientists can be when it comes to resolving societal issues. Partick Torbey focused on startups working to find more ethical and ecological alternatives to meat.

Overall the meetup was a great experience, we learned a lot from the speakers and each other!

iGEM Thrace hosted a week-long event in collaboration with Erasmus from August 21st to August 28th in Alexandropouli, Greece. The event was focused on the different ways we could use art (dancing, theatre,...) to communicate about science.

Before we flew to Greece, we had the chance to meet all the participants through weekly zoom calls where we introduced ourselves and received information about what to expect during our trip. We also started to discuss the different ways we could communicate about science. Each team shared their own experience so far with communication. It was very interesting to see that we each had our own strategies!

Eventually, it was time to pack up and fly to Greece. We were very excited to meet other iGEM teams! The first few days were spent getting to know each other because, in order to learn to communicate about science, we first had to learn to communicate with each other. Team building activities were also essential to feel comfortable with each other. It is not always easy to let go in front of strangers, but it was important to be able to do so for the work we were about to do. 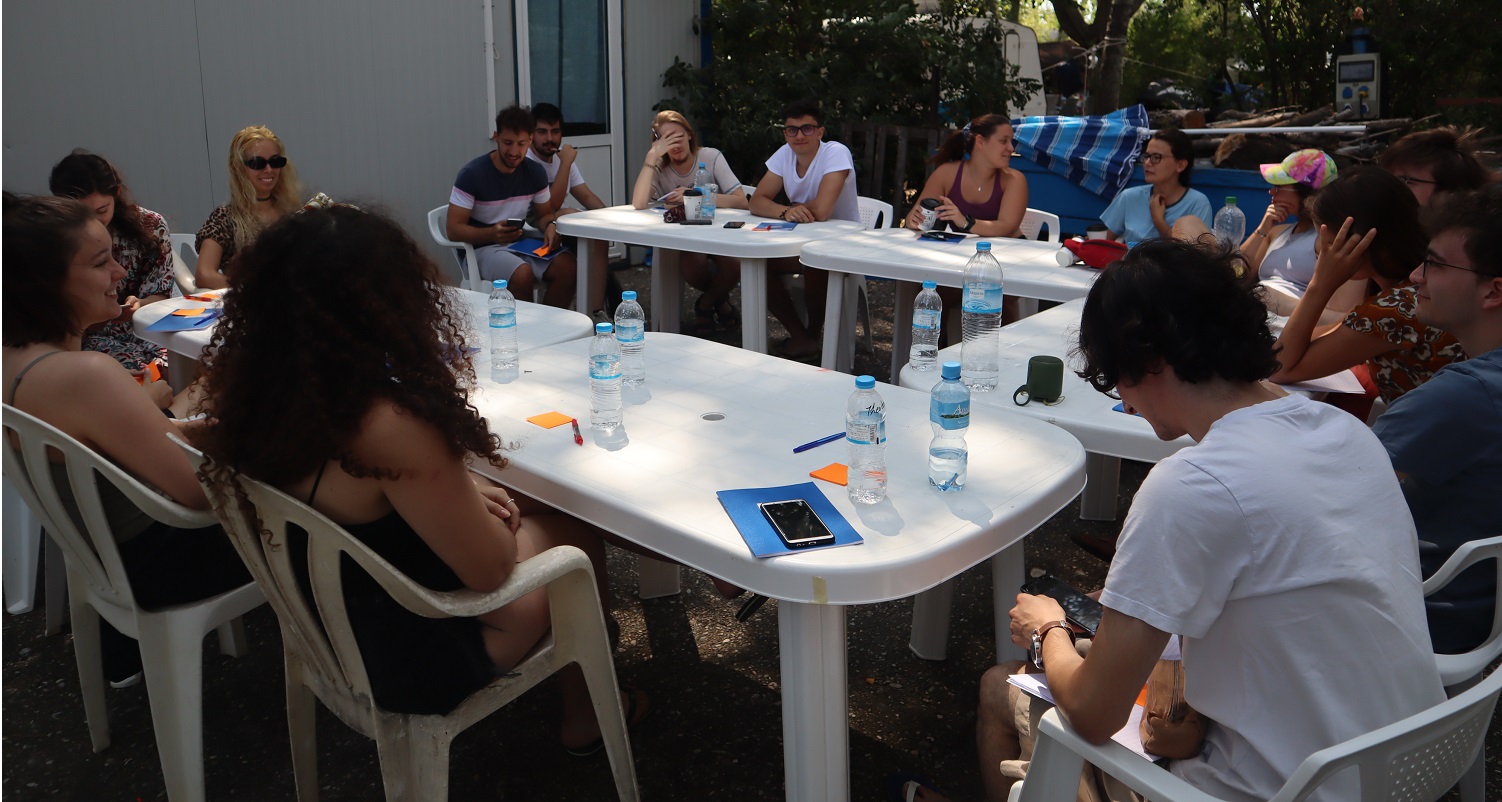 The final objective of the week was to present a show on scientific topics that are important to us, in front of people of all ages and scientific backgrounds. To do this, we were divided into three groups. Each group had to choose a topic and create a small play around it. We had to do everything from the script to the costumes! Everyone was full of ideas during the brainstorming and it was a bit challenging to channel all this energy into writing our shows. In the end, communication was key and we were able to create something we all enjoyed!

As the performance approached, stage fright overcame everyone. To help us relax and prepare for the performance, iGEM Thrace organized an improvisation workshop. It was the perfect opportunity to become more comfortable with the stage and to strengthen our bond.

After a week of preparation, it was showtime! The first group decided to tackle climate change. A subject that is more important than ever, as Greece has been the victim of terrible fires this summer. They had prepared a play with four scenes, each one presenting a consequence of climate change: the mass extinction of species, the repeated forest fires, the melting of the ice and the rise of the sea level, and finally the abnormal weather phenomena such as heat waves or floods. At the end of their show, they ended flyers with simple gestures toward the planet. The second group found a creative way to explain how the covid vaccine works. They represented the human body as a castle protected by its guardians, the immune system. The idea was to show how these guards reacted when attacked and how the covid vaccine reinforced the protection provided by the guards. It was the perfect metaphor as it’s understandable by all! The last group wanted to introduce synthetic biology to the public. It was a real challenge as they needed to first introduce complicated notions such as the DNA, the ability to transform organisms… They decided to focus on the critical steps and simplify them as much as they could. It’s also always a sensitive topic to tackle as GMOs are often perceived as something dangerous that should be prohibited especially in Europe! In the end, it was a great success! 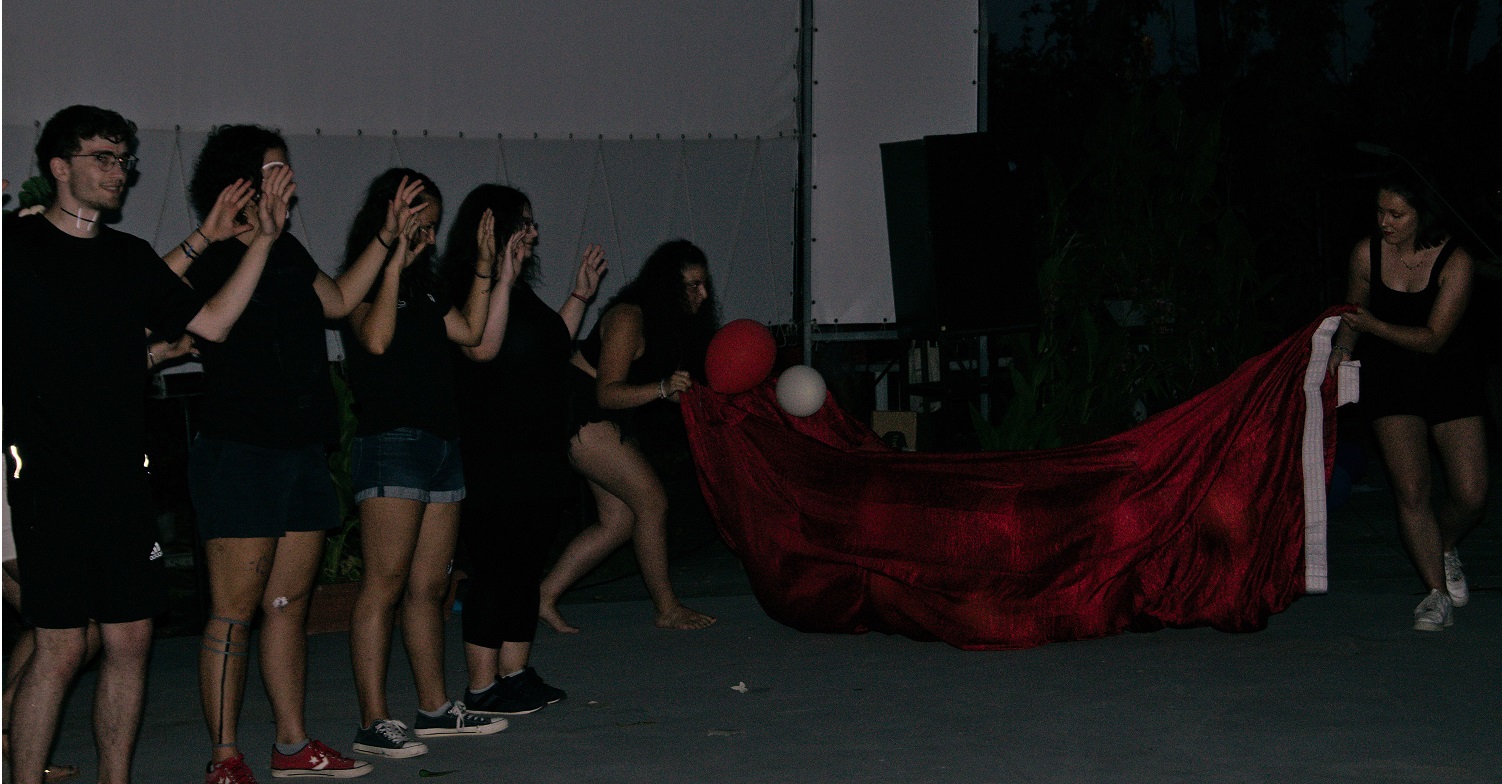 We are very proud of what we have achieved, what we have learned and the friendships we have made during this week. It was all made possible by the dedication of iGEM Thrace and the good spirit of all those who participated in the event. We were so grateful to finally have the opportunity to meet other iGEM teams in person. With covid, we weren't sure if the opportunity would arise. What we learned also gave us a new perspective on our communication strategy. As we still had events to plan at the end of the trip, such as the science fair, we used this new knowledge to create events tailored to our audience to best communicate our project. 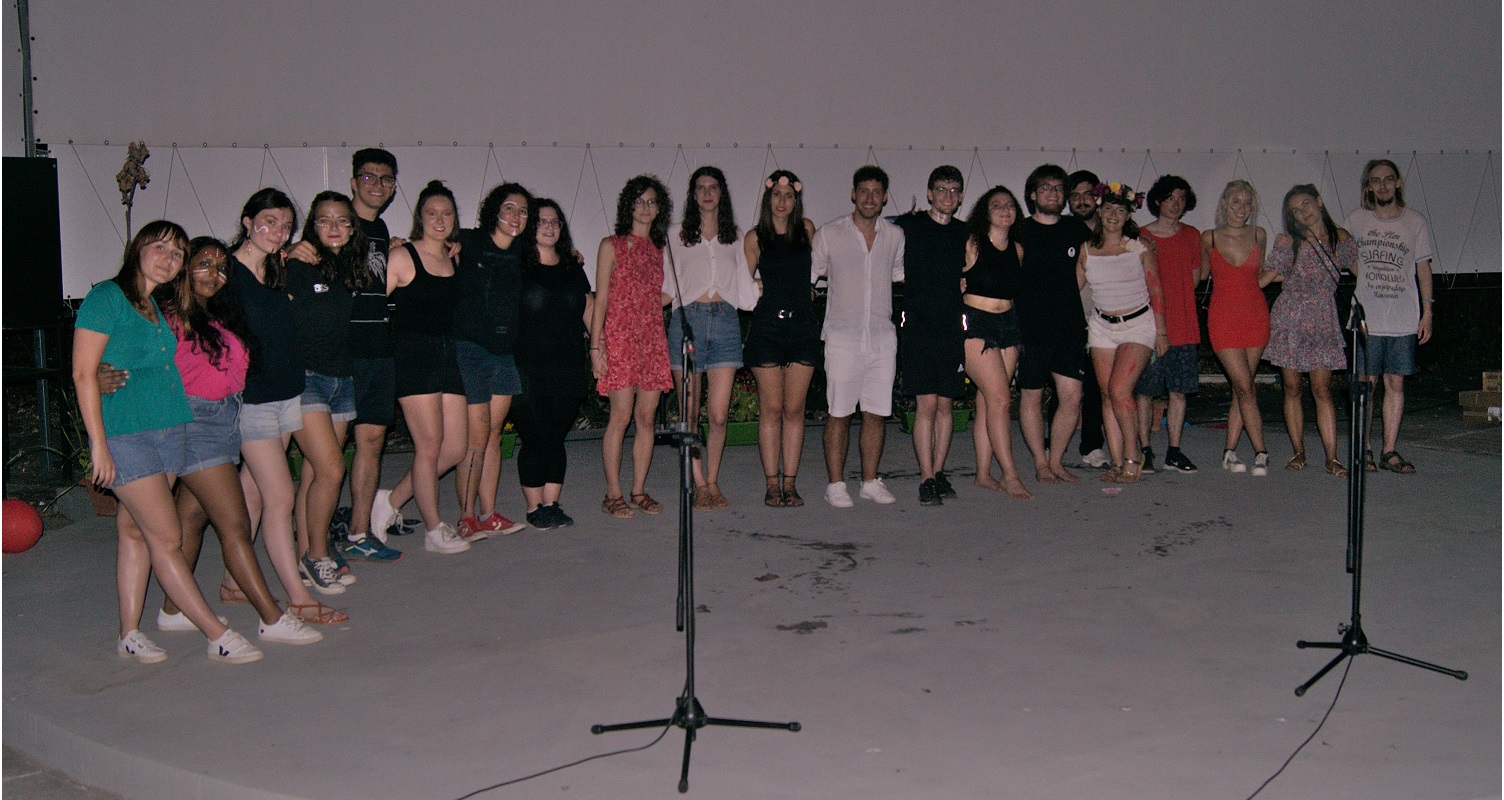 [Photo description: All the team members (20) that participated in the project in a line after the representation.]

It was important for us to continue the Science Communication Project in France, therefore we realised a puppetry show around the Climate Change theme. We projected the act in front of students in High School, to sensibilize them on the subject. They really appreciated the short video and we discussed the environment issues of today. 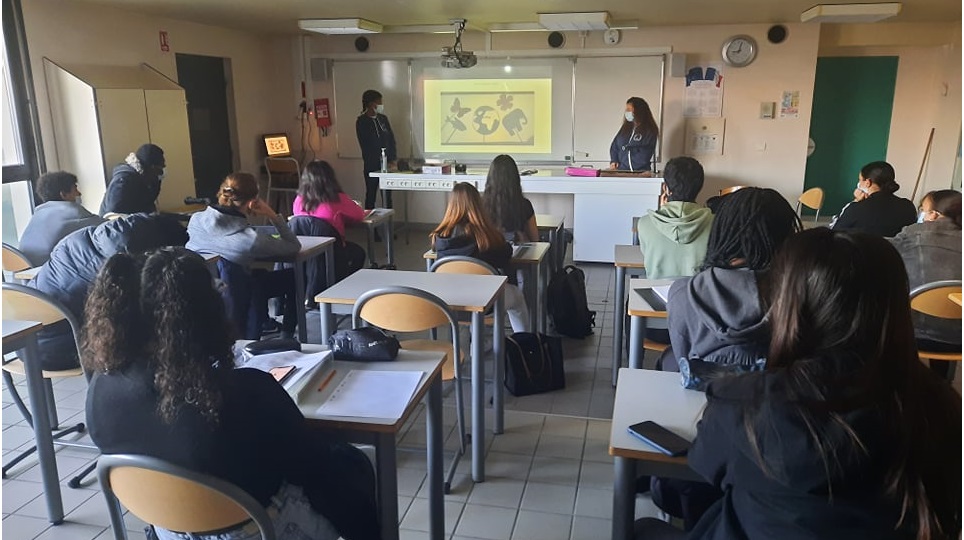 This year we wanted to plan a fun collab to get to know the other iGEM teams. We took inspiration from the movie “The sisterhood of the traveling pant”, a favorite of ours. The idea was to send a labcoat to different team all over the globe. Each team receiving the labcoat could let their imagination free and customize it as they wished to tell their story. For us, it was a way to get to know each other more deeply through art and in the end gaining a precious memory of our iGEM experience.

We had the opportunity to collaborate with the Maastricht team on the Proceedings Journal. Their initiative was to create a peer-reviewed journal collecting articles on the project of different iGEM teams. After submitting our article we were asked to review one article written by another team. It was very interesting to put ourselves in the shoes of a scientist as writing and reviewing articles is a big part of their job! It’s always super interesting to learn new skills and discover the project of other teams especially when we get access to all the scientific details!

It has become an iGEM statement, each year Dusseldorf organizes a giant postcards exchange between iGEM teams from all over the world. This year we participated once again in the iGEM postcard project by sending our beautiful postcard drawn by our talented team leader, Maëva. We truly enjoyed learning about each team’s project as much as we enjoyed their beautiful illustrations. 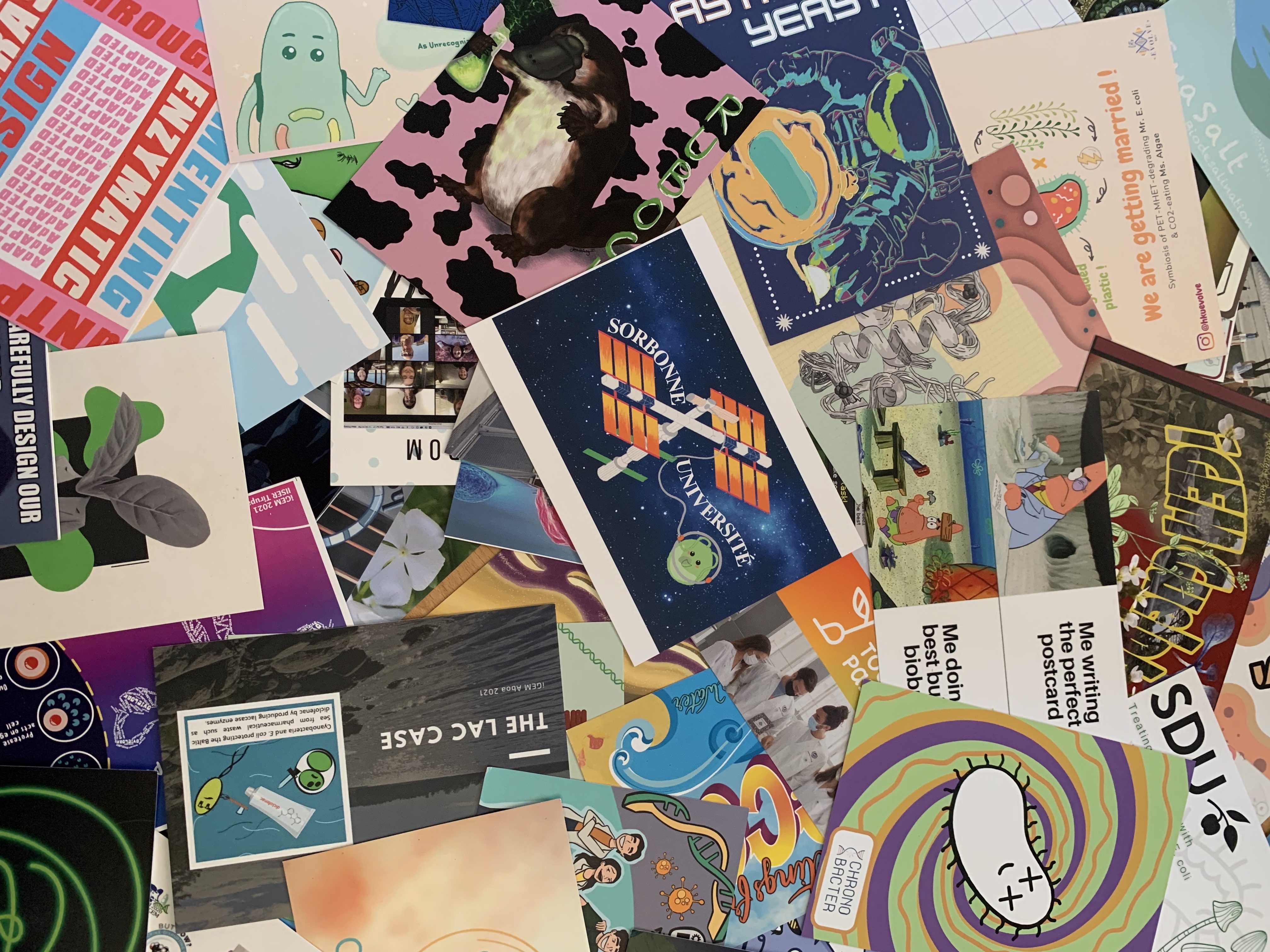 [Photo description: A picture of all the postcards created by iGEM Teams from all around the world]

Promoting the place of women in science is particularly close to our hearts. So when the iGEM teams in charge of the Rosalind Chronicle (iGEM Thessaloniki, Concordia, ULaval and Patras) contacted us and asked us to collaborate, we didn't hesitate for long! The task was to send a photo of all the women in our team as well as a photo of a woman scientist we admire and a short text explaining why. All the photos were used to create a timeline showing the impact of women on science throughout history. 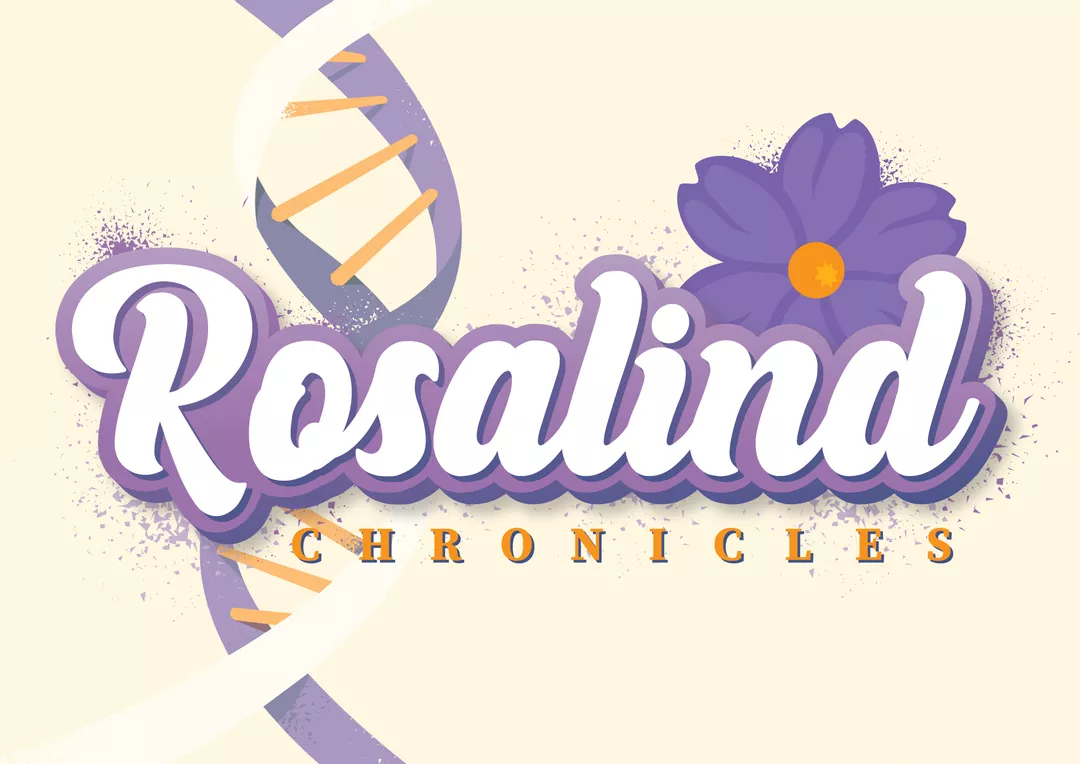 [Image description: There is a purple and orange DNA molecule on the left side. Rosalind Chronicles is written in the middle. There’s a flower at the end of the word Rosalind ]

Link to the complete Timeline !
https://padlet.com/louisjacquesruel/Rosalind_Chronicles

iGEM GO Paris-Saclay challenged us on Instagram to take pictures in front of a monument in our city. We decided to take a picture in front of the Palais du Luxembourg, a very beautiful place in Paris. This was a turning point for us, with the Covid restrictions, it was actually the first time we all met in person. This afternoon allowed us to bond and changed the dynamics of the team for the better. Thank you iGEM GO Paris-Saclay! 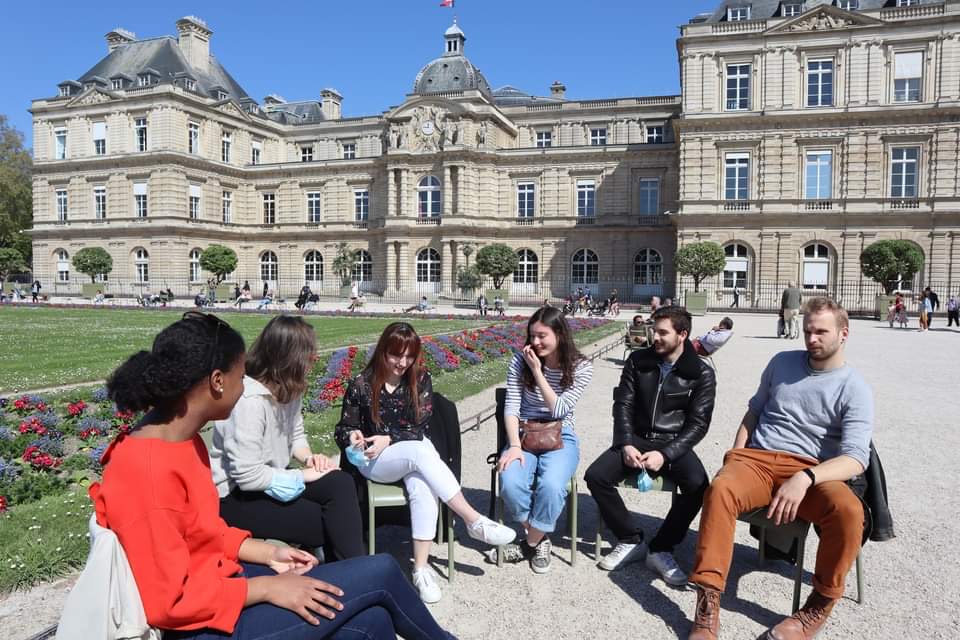 We took part in the iJET collaboration organized by the iGEM team TU Darmstadt. The collaboration aimed to connect iGEM teams all over the world by passing around a paper plane. It’s such a creative way to link us even from far apart. We really enjoyed watching the final result! 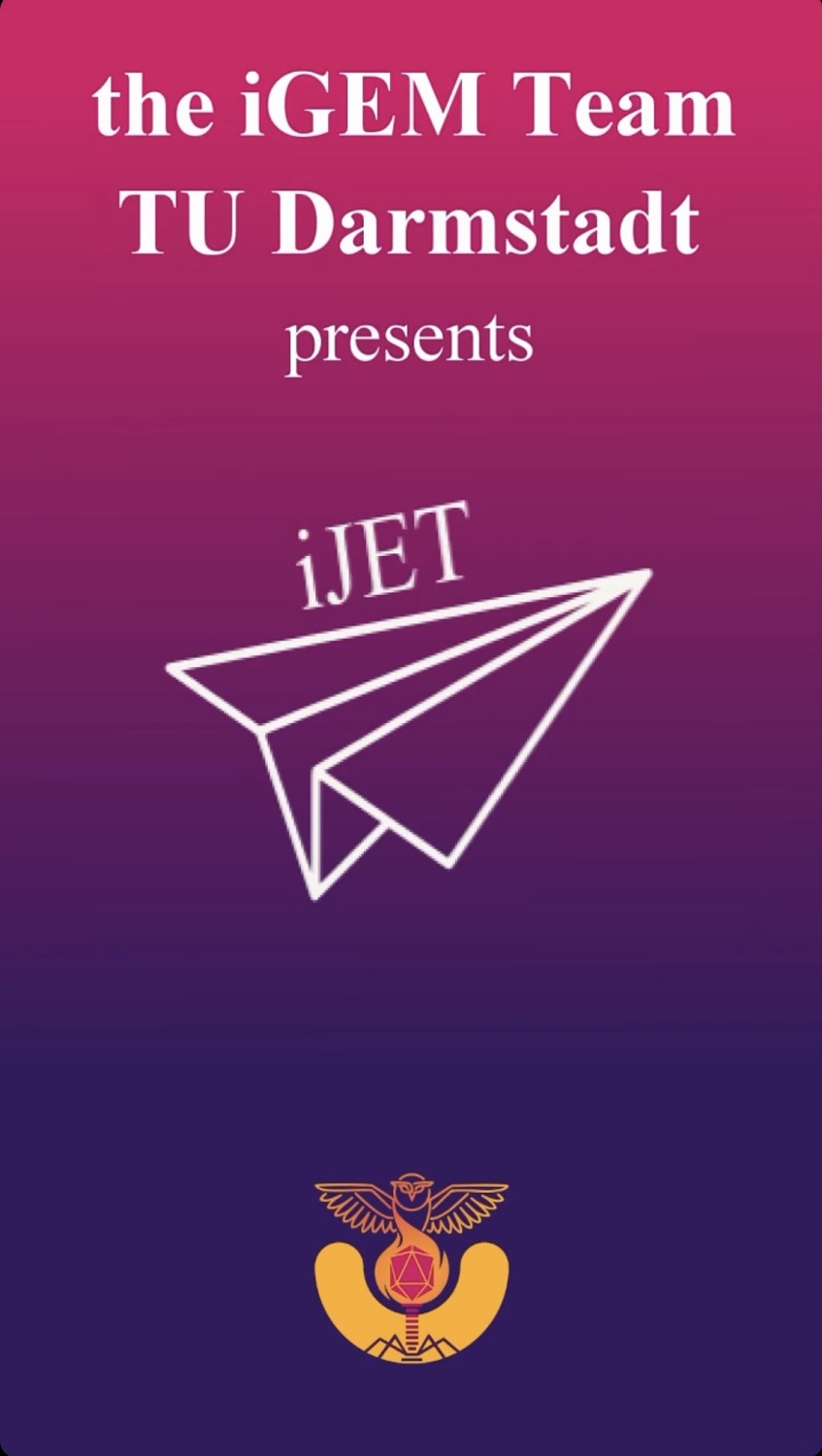 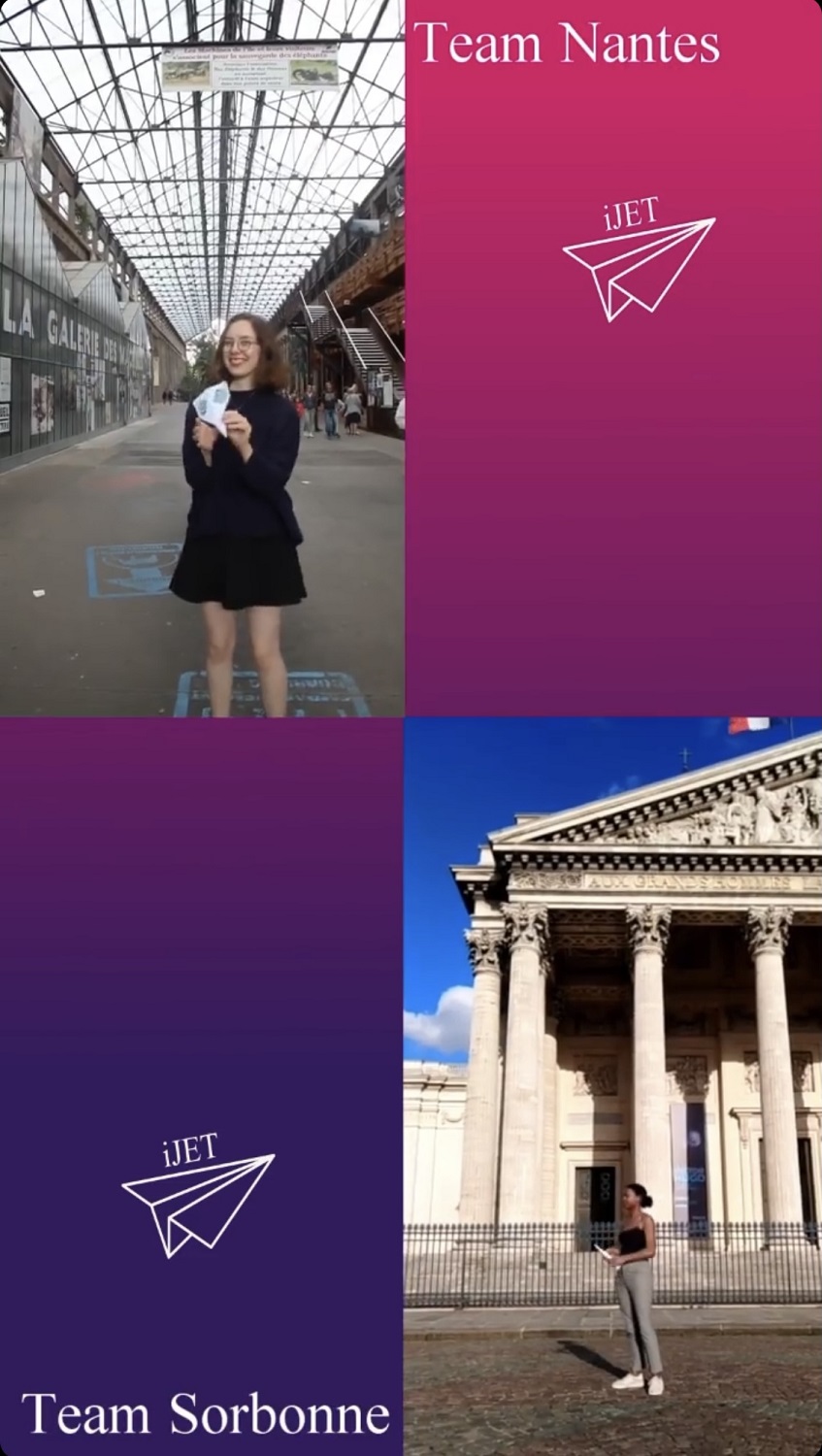 The iGEM team from Nantes had for the project to create a video with team members all over the world saying hello in their native language to emphasize the international aspect of the iGEM competition during a presentation to highschool students. We took part in the project as we are always happy to say Bonjour! alongside our fellow iGEMers! 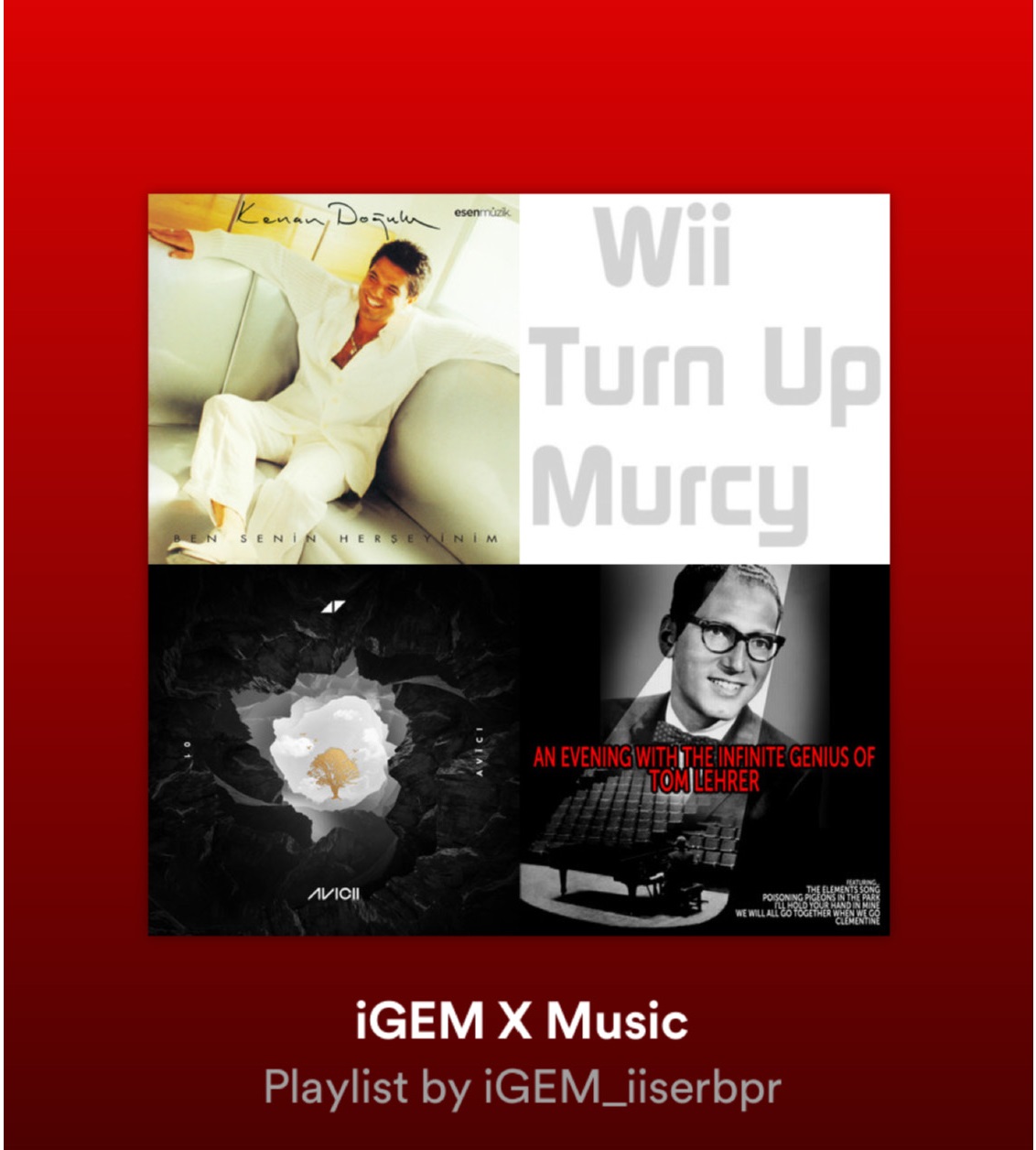 [Photo description: The picture of the Collaborative Playlist]

We participated in the playlist created by the iGEM team of IISER Berhampur. As music is known to bring people together, they had the idea to create a collaborative playlist in which iGEM teams could add a song that represents their state of mind. We chose "Friend of Mine" by Avicii with Vargas and Lagola because the friendships we have built this year are one of the things we are most proud of.