On our way to Mars

Space exploration… What a dream! Mankind has always wanted to explore the world around it, from Christopher Columbus on his way to America to Niel Armstrong and his first steps on the moon. The next great adventure will be the journey to go to Mars and all the challenges that come with it. Indeed, over the past several years, space agencies all over the world have expressed the wish to initiate this trip [1][2].

Travelling to Mars would take approximately 3 years in which a full crew will have to live in a confined space facing many obstacles. However, the constraints related to the survival of astronauts in a closed system are a limit to the possibilities of space exploration. We have to say it, space is not the most welcoming place, it is not even welcoming at all!

This is the daily bread of tomorrow's explorers [3]. The International Space Station is the tool of choice for studying life in space. It is home to astronauts who conduct experiments in preparation for long-duration space travel. However, the station is not autonomous and must be regularly supplied with oxygen, water and food by unmanned cargo shuttles [4]. These supplies are expensive, polluting and time consuming. If we want to consider a mission to Mars, this is not an option. It will be mandatory to bring all the necessary food, medicine and equipment for the whole duration of the trip. Moreover, each astronaut consumes about 1kg of food, 1kg of oxygen and 3kg of water per day. Let's imagine a mission to Mars with 6 crew members. If no resources are produced on board, it would be necessary to carry more than 30 tons of reserves to make the trip viable [5].

Carrying the necessary reserves for the trip or refueling continuously does not seem to be a feasible option. One solution that has emerged is the use of Bioregenerative Life Support Systems (BLSS). These systems aim to recreate a terrestrial ecosystem, mainly lake ecosystems as they are very diverse, onboard a spacecraft. Within the system, there are several interconnected incubators in which microorganisms can be found that perform the functions of the matter cycle[6]. The ESA (European Space Agency) is currently developing the MELISSA project, which aims to introduce organisms such as plants, bacteria or algae into closed systems inside the International Space Station [7]. The MELISSA (Micro-Ecological Life Support System Alternative) ecosystem was envisioned as a bio-regenerative life support technology (BLSS) for long duration missions [8].

Usually protected by the Earth’s atmosphere and magnetosphere, living organisms that will be a part of space journeys are going to be exposed to cosmic radiation. Radiation corresponds to energy that propagates itself as an electromagnetic wave or a particle. The 3 main sources of space radiation are : 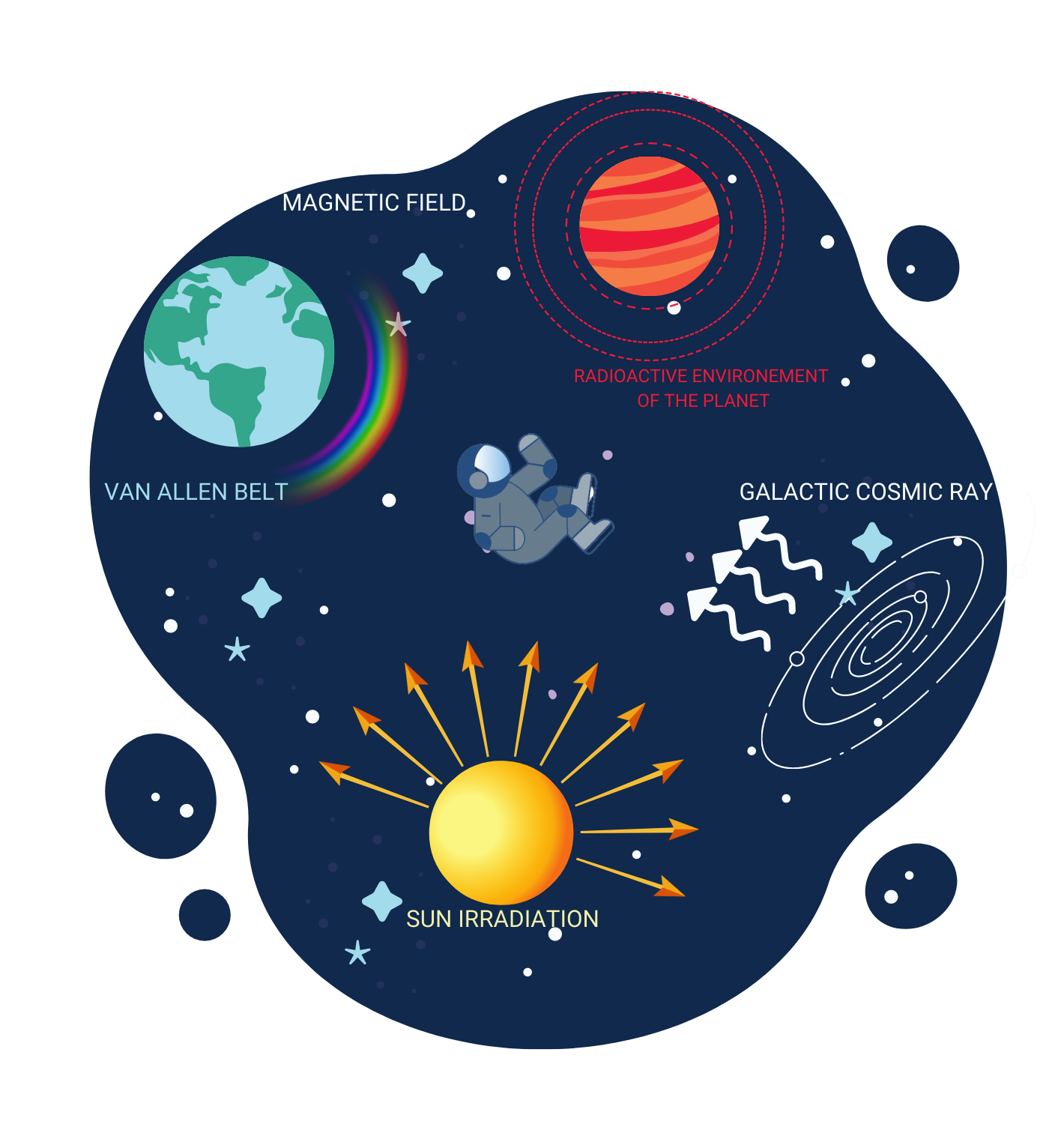 Space radiation causes damage to cellular components, whether they are human, plant or microorganism cells. We often refer to the nefast effects of radiation on DNA, which is a fragile molecule that should not be altered, but radiation affects all kinds of macromolecules, such as RNA, proteins and lipids [12].

In space, we will face way worse radiation-related damages. Ionizing-radiation to which living organisms would be exposed will lead to more serious consequences.

→ Formation of thymine dimers: that occur when there are two consecutives thymines on the DNA strand [13]. The UV irradiation leads to the formation of a covalent bridge between both thymines. This causes important geometric changes in the DNA structure. If those modifications are not repaired in time, DNA replication will be partially hindered, causing the apparition of lots of mutations.

→ Double strand breaks: (DSB) [14], which is the worst damage that can occur. They are breaks in the DNA’s phosphodiester chain. If they aren’t repaired, this will seriously jeopardize the cell’s survivability and lead to tumorigenesis or cell death.

→ Indirect damages: Indeed, cells exposed to radiation suffer from strong oxidation of its molecules caused by the formation of reactive oxygen species (ROS) obtained by the electrolysis of water molecules [15]. ROS overwhelm the cell’s antioxidant mechanisms and thus generate damages not only to the DNA but also and especially to proteins, notably enzymes responsible for DNA reparation.

Photosynthetic organisms are not an exception to the rule : they are sensitive to ionizing-radiation and their oxygen production may be affected [16]. As for Chlamydomonas reinhardtii, radiation causes oxidative stress and cellular damages, which degrades the photosystem and thus oxygen production.

If we want to introduce our algae into the ISS to make it produce oxygen, we need to protect it from space radiation.

In order to increase the chance of survival of our algae, we looked at an extremophilic bacteria resistant to ionizing radiation: Deinococcus radiodurans. This amazing bacteria shows strong capacities to resist ionizing radiations, Ultra-Violet radiations and mechanical forces. Deinococcus radiodurans is able to resist radiation levels up to 12 000 Gy [17] (50 Gy are lethal to humans). It has many strategies to resist radiation. Among them, we have especially retained a protein expression mechanism that forms a buffer system against oxidative stress.

This extremophilic bacteria produces peptides which, by forming a complex around a manganese atom, play the role of ROS scavenger, in other words an antioxidant. This helps protect the organism against damages caused by ionizing radiation.

Manganese is the transition metal which has the best ability to scavenge peroxyl radicals (ROO•-). It seems to have the power to break the chain of oxidative reactions via this reduction :

Manganese also has the ability to prevent lipid peroxidation[18]. This radical scavenging activity confers resistance to the deleterious effects of radiation. The combination of Deinococcus peptide accumulation with a high concentration of intracellular manganese leads to very high levels of radio-resistance [17].

From this observation came the idea to express such a peptide synthesized by Deinococcus radiodurans in our green algae. Preparations from ultrafiltration of D. radiodurans confer a protective antioxidant effect on proteins subjected to high doses of ionizing radiation. This ultra-filtrate is enriched in peptides, manganese and orthophosphate. The peptide that we decided to express in Chlamydomonas reinhardtii is actually a rationally-designed peptide engineered in order to have the highest efficiency. This decapeptide appears to have a highly protective effect at the whole cell level as well as at the single enzyme level when complexed with manganese [19].

By associating this peptide expression with an manganese level elevation within the cell, we therefore expect a significant antioxidant activity and thus a better resistance to radiation in Chlamydomonas reinhardtii.

Concretely, we have a triple objective:

Our work could be of great interest in order to insert the microalgae within a closed circuit on the ISS, but also in other contexts where Chlamydomonas reinhardtii is under oxidative stress.