Our project focuses on the protection of Chlamydomonas reinhardtii against radiations. As we observed by studying organisms that are naturally radioresistant, various strategies exist. Those mechanisms are converging into two trends :

In order to successfully protect C. reinhardtii, we chose to work on protection against damage induced by ionizing radiations. Those damages can directly affect macromolecules, for example by causing double-strand breaks (DSBs), or indirectly owing to the production of reactive oxygen species as a result of radiolysis of water molecules[3](figure1). 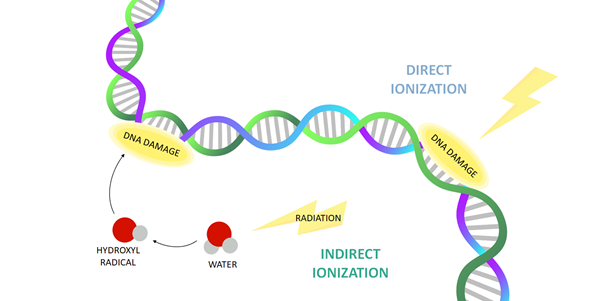 The Chlamy’N Space project consists of the expression of an exogenous antioxidant gene in Chlamydomonas reinhardtii. This small antioxidant is a rationally-designed peptide inspired by small antioxidant peptides coming from the extremophile Deinococcus Radiodurans, naturally resistant to radiations. It was already tested and showed great efficiency in the radioprotection of mice and human cells[5].

But why do we want Chlamydomonas reinhardtii to become radioresistant?

When designing our project we thought about the different applications it could have. We identified 3 of them:

Using radioresistant C. reinhardtii for long-term space travels
Use of ROS-protected Chlamydomonas reinhardtii for the decontamination of irradiated areas and the water filtration
Global advancement in the understanding of oxidative-stress solutions

Long-duration space travel poses new technological challenges. Bioregenerative life support systems (BLSS) provide a solution to the constraints of waste generation and lack of food or oxygen resources. They are loop systems based on the principle of matter cycles (carbon and nitrogen cycles) and allow for the continuous recycling of system resources[6].

ESA (European Space Agency) is one of the agencies that have decided to take up the challenge, with the MELiSSA (Micro-Ecological Life-Support System Alternative) project[7]. The system consists of five chambers containing different types of bacteria performing their own functions such as nitrification, oxygen production or biomass. One of these chambers is a photobioreactor in which the photosynthetic activity of the microorganisms grown in the chamber allows them to consume CO2 and produce O2. 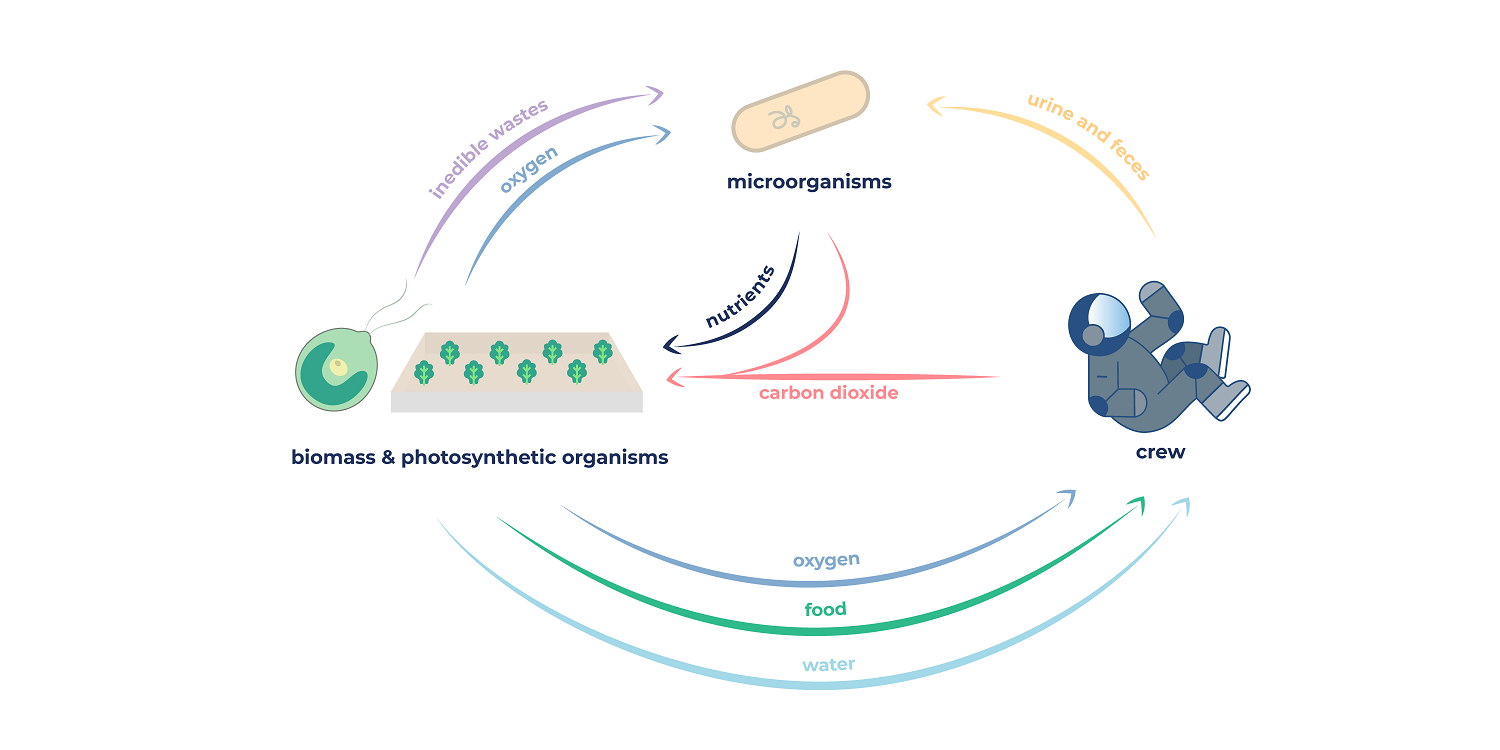 Chlamy’N Space emerged from our common interest in these loop systems.

Christophe Lasseur, responsible for the MELiSSA program, made a conference in 2017 where he reported the relevance of using microalgae in closed systems[8]. Like all photosynthetic organisms, the microalga Chlamydomonas reinhardtii has the ability to convert carbon dioxide into sugar and oxygen to provide energy for the alga and to enable the respiration of living things. It is therefore a perfect candidate to integrate the photobioreactor of a BLSS. It could act on several levels such as oxygen production and carbon dioxide absorption or in the filtration of liquid waste. Moreover, C. reinhardtii is a well-known organism, and a model for many years[9].

Despite this, space remains a hostile environment. We know that humans suffer from excessive radiation exposure, but this is also true for algae. Without the protection of the magnetosphere and Earth's atmosphere, C. reinhardtii will be exposed to a lot of cosmic radiation that will have a deleterious effect on its cellular and genetic integrity. If space agencies wish to maintain a constant production of oxygen, it is necessary to protect them throughout the flight. The use of radioresistant modified Chlamydomonas reinhardtii could be an effective solution in this context. 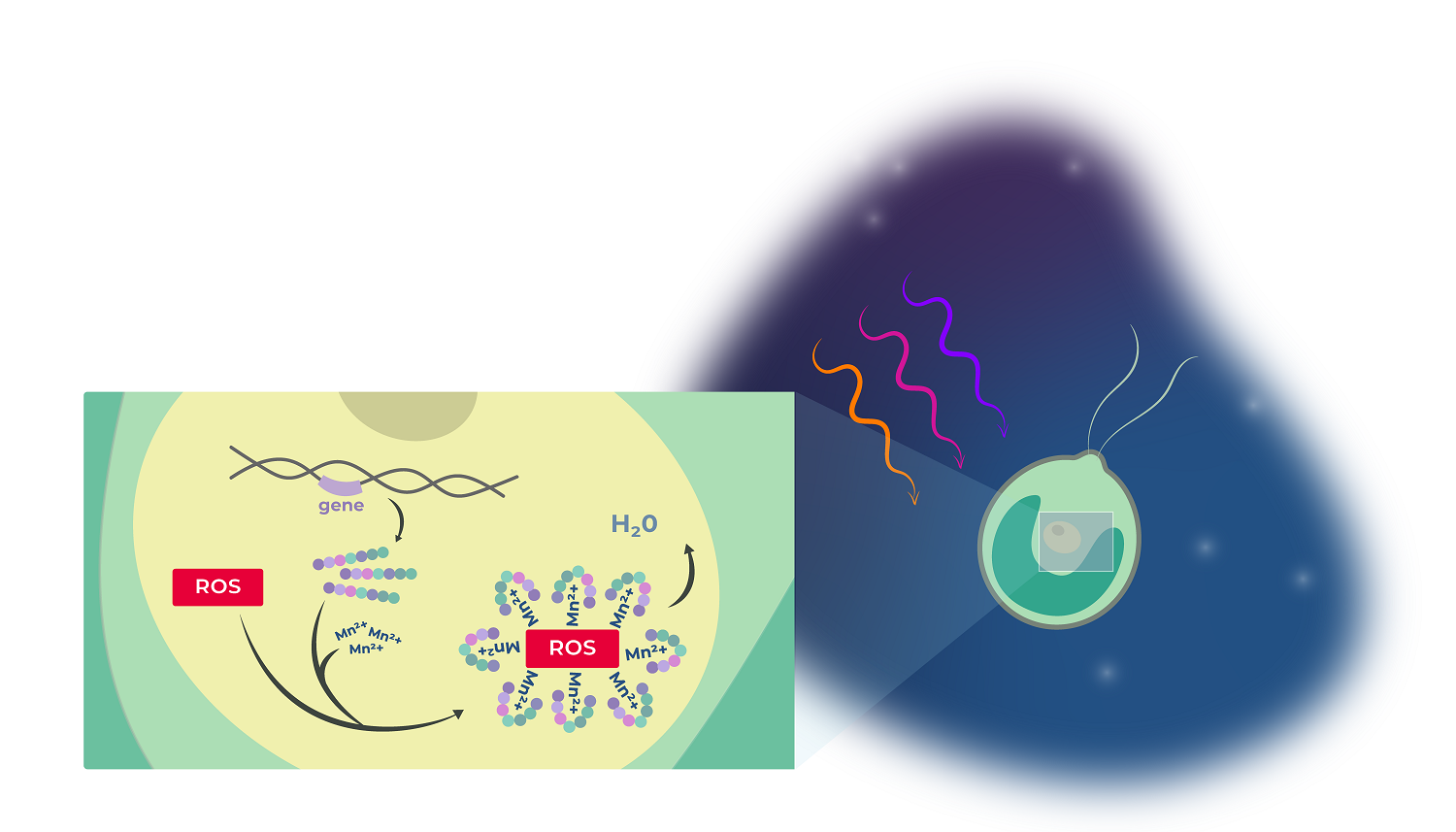 Radiation is not only present in space, there are many examples on Earth. Some areas are heavily polluted with radioactive compounds and the clean-up of these places is a real challenge. Microalgae are already being used as a tool for bioremediation, i.e. decontamination of an environment with chemical compounds by a microorganism[10]. The next step would be to use Chlamydomonas reinhardtii to accumulate radionuclides in irradiated areas and thus clean up the water around radioactive sources. However, these radioactive areas induce the production of intracellular ROS which damage the cells of the microorganisms and can lead to the death of the organism. Our Chlamy'n Space project can provide a solution to this type of problem. We can imagine a closed system for filtering water, in which there would be a compartment containing our manganese-resistant Chlamydomonas reinhardtii.

SEMiLLA IPStar is also developing applications on Earth of the closed system of ESA's MELiSSA project. One of their projects is a water filtration circuit for the University of Kenitra in Morocco to filter nitrates from groundwater. Our alga Chlamydomonas reinhardtii could therefore also be included in this closed system in order to achieve this filtration while being protected from oxidative stress.

Global advancement in the understanding of oxidative-stress solutions

The previous possible uses of our project mainly took advantage of our chassis as a microalga. It is the use of the capabilities of microalgae, under stress conditions, that justifies our implementation. But we can focus more on the mechanism of response to oxidative stress itself. Because even if some research teams focus a large part of their research on the understanding of this mechanism in Chlamydomonas reinhardtii[12], oxidative stress is universal and there is an incalculable number of subjects of study on this subject on all types of living organisms.