First of all, the core of our project is based on the specific recognition of ribozyme-based aptamers and target molecules. Before verifying the development of new aptamers in our rapid development platform1, we first used Theophylline and Gardiquimod aptamers (Gard_337&Theo_AAG/AAAAA) reported in the literature to prove and characterize the principle of our platform1, In addition, we have also tried the part BBa_J119449 (designed by Ali Tauchen from Eckdahl_Lab), an aptazyme sharing the same ribozyme domain of sTRSV, and the characterization of it is available in our improvement website.


According to the existing methods for characterizing ribozyme self-cleavage, we designed an experiment based on urea denatured polyacrylamide electrophoresis, in which a sequence was cut out when the aptamer self-cleavage occurred, and the position of the band changed during electrophoresis. Based on the template of different aptazymes in T7 transcription reaction in vitro and the excess target molecules determined according to the variation of cleavage fraction with ligand concentration in the literature, we predict that we will see two bands representing aptamers that have self-spliced and aptamers that have no self-cleavage. In order to achieve higher resolution, we used 10% urea denatured TBE PAGE gel (Fig. 1).

It can be seen from the PAGE that there is a significant difference in the brightness of the band corresponding to the cleaved aptamer and that of the uncleaved aptamer in the case of whether or not to add target molecules as variables, and the addition of target small molecules can significantly inhibit the self-cleavage of Theo_AAG/AAAAA and Gard_337.


After verifying the performance of the aptamer, we used DRIVER to select aptamers for specific binding to target molecules1.


We first built a template library. The aptamer template consists of T7 promoter, W prefix, N5~N7 and N30/N60 random sequence, sTRSV skeleton and X suffix. According to the location and size of random sequences, there are 12 types of libraries, which are mixed with positive T7 promoter sequences and annealed as transcripts for the first round of selection. We first conducted four separate rounds of negative selection to produce self-cleavage templates for rich parties. Then positive and negative selections were carried out alternatively by the proportion of 1:1, and the quality was controlled by RNA denatured polyacrylamide gel electrophoresis (Fig. 2) and hot start PCR product on agarose gel electrophoresis in each round after another 23 rounds of hot start PCR were performed. In order to verify the application potential of our system in the rapid development of target small molecule rapid test strips, we identified our target small molecular groups (carbamazepine, quinidine, crystal violet lactone, ofloxacin, thalidomide, (-)-epigallocatechin gallate, aristolochic acid, clozapine, prochloraz, S protein). They were dissolved in the selection process and mixed with the appropriate concentration as the target group.

As shown in the figure, the transcripts at 12 rounds showed the expected bands in the range of aptamer length (80,150), indicating that our library was retained in the selection process.


We used the 18 rounds and 30 rounds of TE-0.1ng/ μ L salmon sperm DNA diluted 18 rounds and 30 rounds of selected library to establish the NGS sequencing library, and carried out the negative selection round steps until USER digestion with and without adding target groups, respectively.Then we added NGS Adapter to it through PCR and NGS sequencing, and then we selected it according to certain strategies after splicing the sequencing results (Fig. 3). And got the sequence we need from it 1,2.


We expect to establish a corresponding relationship between the aptamers we have selected and the small molecules in the target group through hit analysis. We have two schemes for hit analysis. One is to transcribe in the case of adding a single target small molecule and then analyze the shearing effect by polyacrylamide gel electrophoresis. The other is to add a probe sequence to both ends of the aptamer we have screened out, and the streptavidin-coated enzyme plate is incubated with a biotin-modified oligonucleotide probe complementary to the 3 'end probe of the aptamer. By using the interaction between the 5' end probe on the aptamer and the colloidal gold particles with complementary probes, the absorbance of colloidal gold particles is used to characterize the proportion of aptamers that undergo splicing. To determine the aptamer corresponding to the small molecule of the target. Then we will evaluate its cleaving efficiency at different target molecular concentrations, and select the aptazymes that meet the desired performance for rapid test.


Unfortunately, we haven`t finish this step up to the wiki freeze day.

Our system relies on aptamer lateral flow analysis (ALFA) for detection. First of all, we used the existing aptamer (Gard337) to construct a transcriptional template with extra sequences complementary to the probes . The probe sequence is predicted by our model. As shown in Fig. 4 ,the probe complementary sequence is located on the prefix and suffix of aptamer, respectively. These two probes are complementary to the sulfhydryl modified oligonucleotide probe coupled to colloidal gold particles and the online biotin modified oligonucleotide probe respectively. Colloidal gold particles were obtained by reducing chloroauric acid solution with sodium citrate and incubating them with sulfhydryl modified oligonucleotides, and NaCl was added to precipitate uncoupled colloidal gold particles. T line probe and C line probe were incubated with streptavidin in a certain proportion3,4. 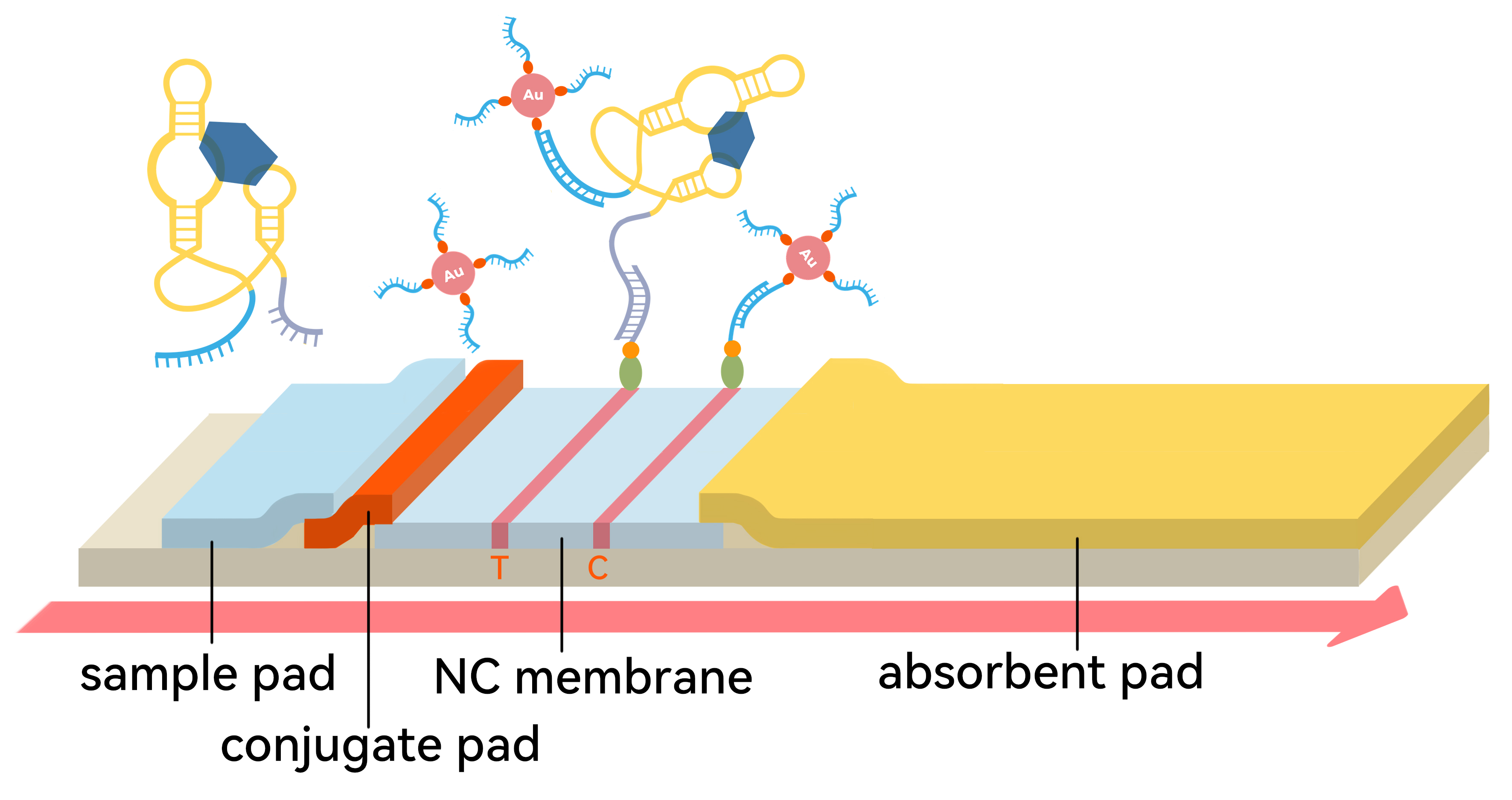 Figure 4 our design of LFA 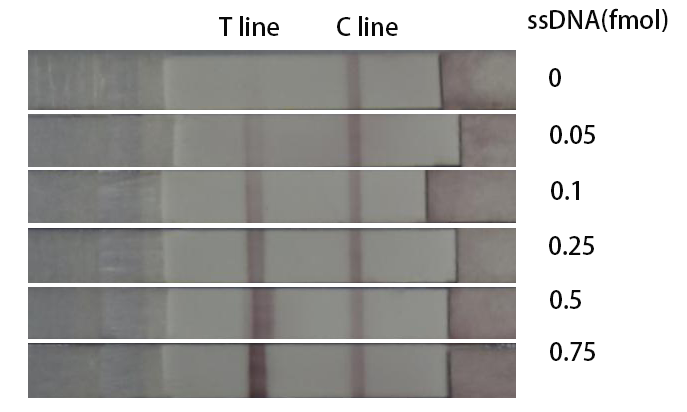 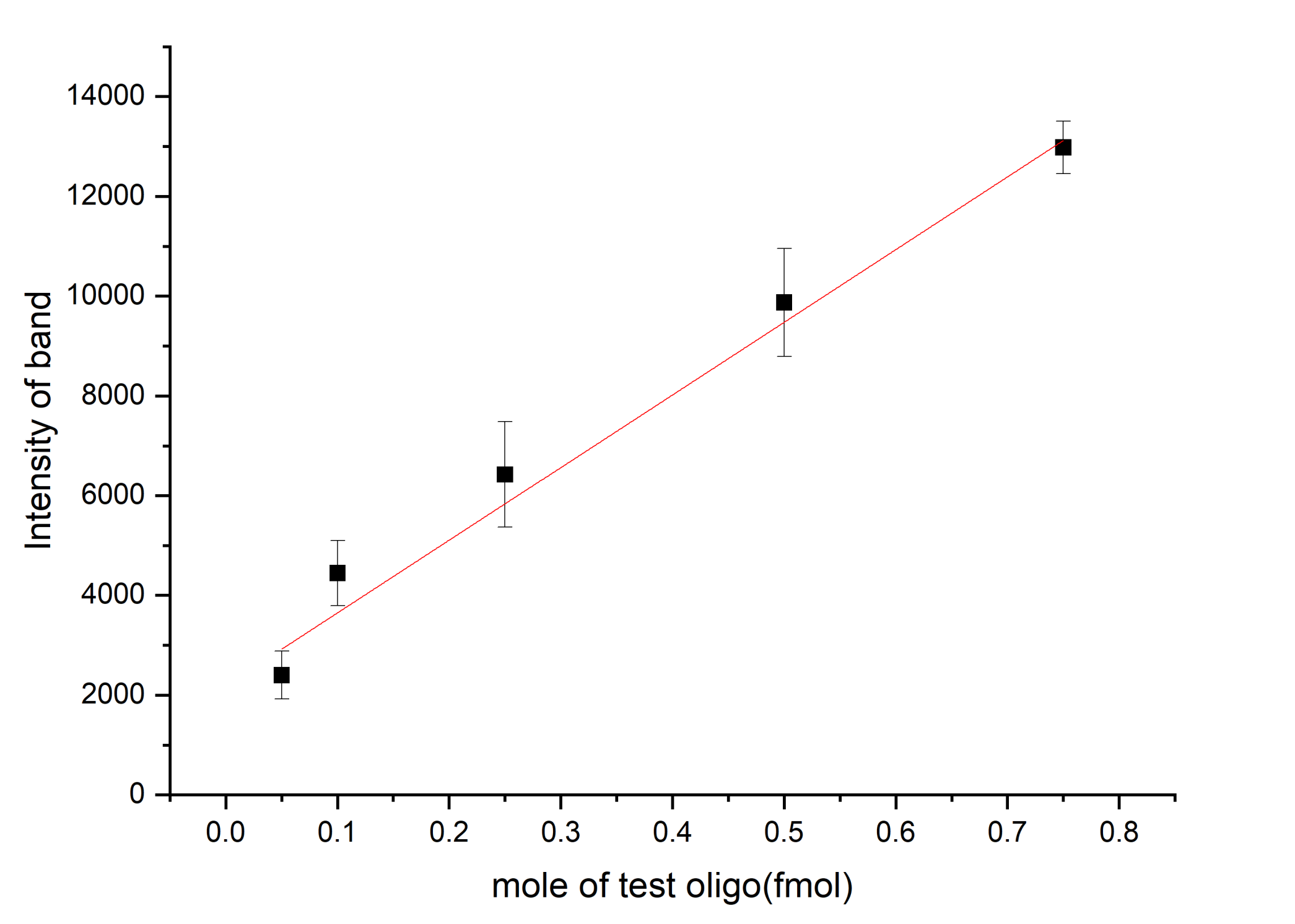 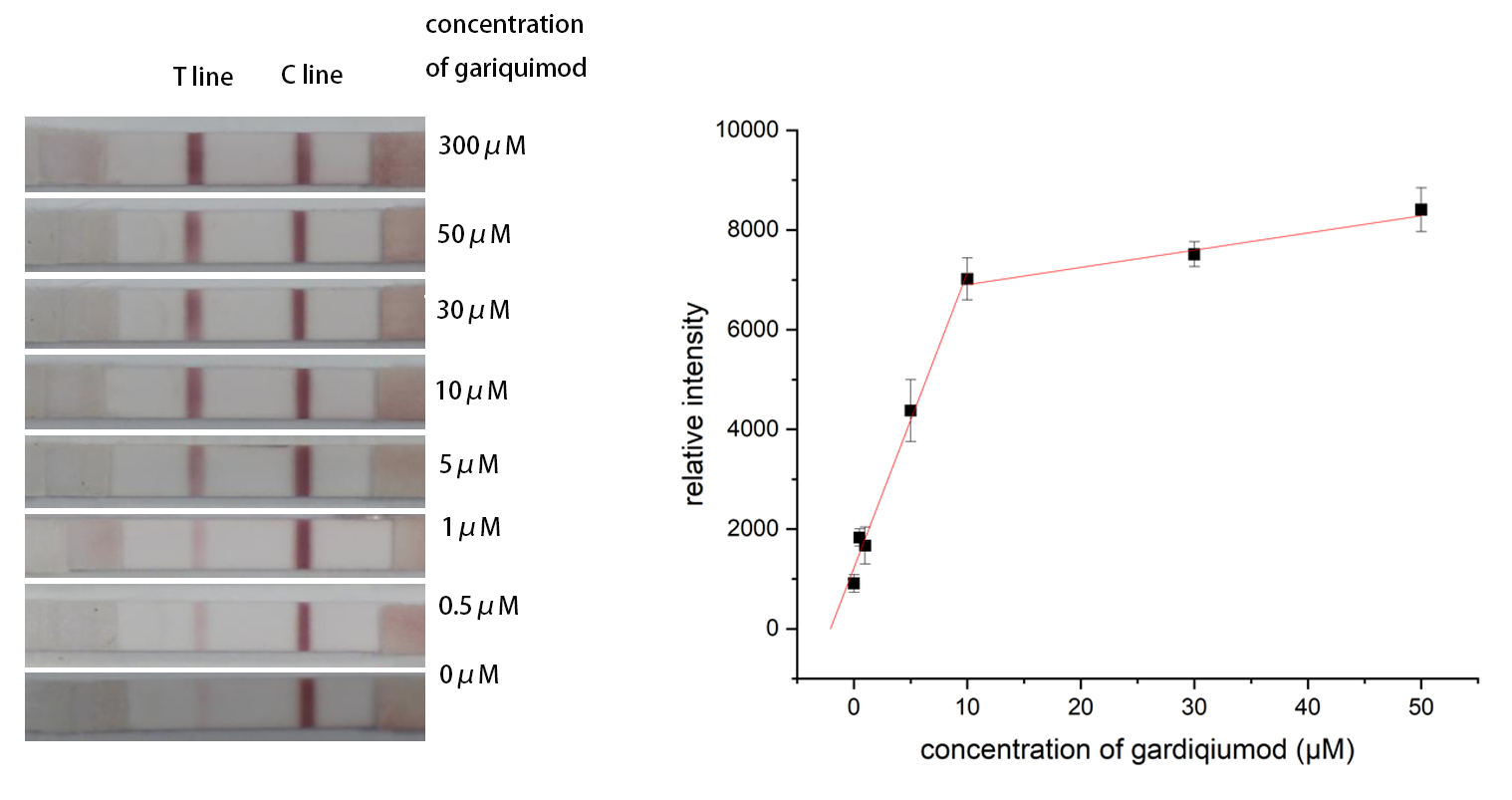 
The effect of T line was observed by adding different concentrations of verification probe to the test paper.We use a short DNA probe to verify the feasibility of the LFA system, similar to the aptamers that will be used in the LFA system. The front and rear ends of the DNA probe are complementary to sulfhydryl-modified oligonucleotide probes coupled on colloidal gold particles and online biotin-modified oligonucleotide probes. and it was found that the higher the concentration of the probe, the darker the color of T line (Fig. 5).


The integral grayscale analysis of T line showed that there was a linear relationship between the grayscale of T line and the amount of verification probes (Fig. 6). 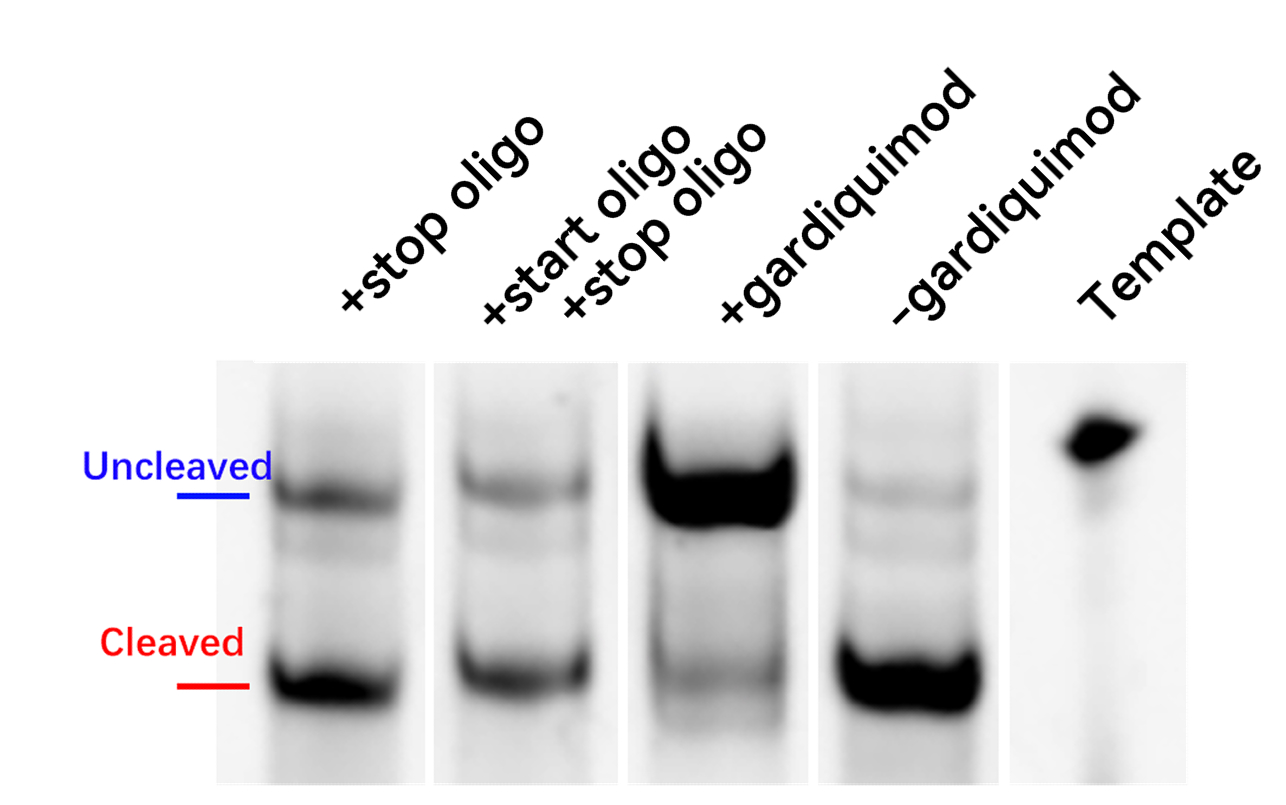 Figure 8 The attempts of TMSD optimization

Stop oligo is a 30-mer ssDNA with 27 bases pairing with the 5` end of aptazyme designed to break the structure of aptazyme, while the start oligo is the complementary strand to stop oligo used for competing the stop oligo down.


We used polyacrylamide gel electrophoresis to verify the rationality of the design of stop oligo and start oligo（Fig. 8）. As expected, the amount of uncleaved aptazyme increased significantly as the stop oligo was added; after adding start oligo, the band of uncleaved aptazyme became lighter. In short, stop oligo showed inhibition on aptamer cleavage, and start oligo could bind to stop oligo and relieve the inhibition, but unfortunately, aptamer cleavage could not be restored to the same level as that of the control group.


Our model and the work of Team:SJTU-Software ( view our partnership ) helped us a lot for the design of our stop oligo and start oligo and the prediction of aptamer structure. We are trying to build a further integrated model to find better engineering strategy for our optimized design.

Figure 9 The prediction result from SJTU-Software