The time of an iGEM season is very short, and we need to do a proof-of-concept of the system we designed before the end of the game. So, we selected 3 alternatives (BBa_K3714000 & BBa_K3714001 & BBa_J119449) in the published aptazyme developed based on hammerhead ribozyme. The characterization result are shown below.("+" or "-"represent the target of corresponding aptazyme was "added" or "not added" into transcription reaction) 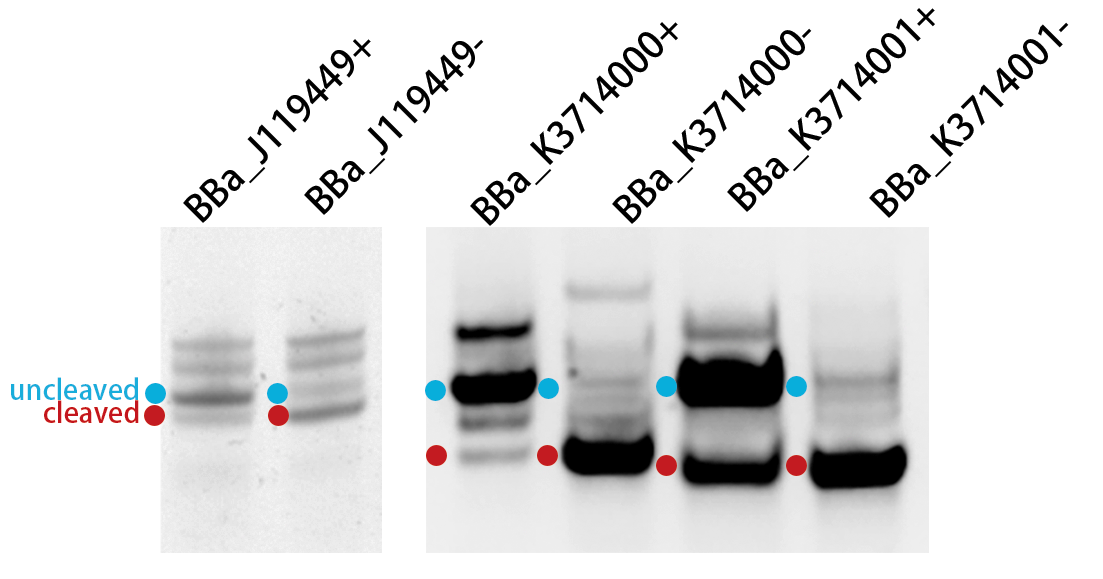 Among them, BBa_K37140001 performed well, but BBa_J119449 and BBa_K3714001 didn`t show a nice fold change even between the maximum concentration difference of theophylline. So after that, we tried to optimize the two theophylline biosensors for a better performance while using gardiquimod biosensor BBa_K3714000 for further design to work in our rapid test strip.

For BBa_J119449(part designed by Ali Tauchen from Eckdahl_Lab),we tried multiple site mutations in stem loop II and stem loop I regions of the aptazyme according to the sequence of theophylline biosensors reported in the literature, and according to the strategy provided in the literature2, we added 2 guanines after the + 1 position of their T7 promoter to increase their transcriptional efficiency. Thus, we constructed these four parts with overlap PCR1,3(Figure 2 & Figure 3). At this time, the 5' end of the transcript will start with GGG, and we think that it may form a stable secondary structure with the mismatching of the CCC within the aptazyme, which will affect the original function of the aptazyme. So we also added CC on the 3' end to stabilize the structure of aptazyme. 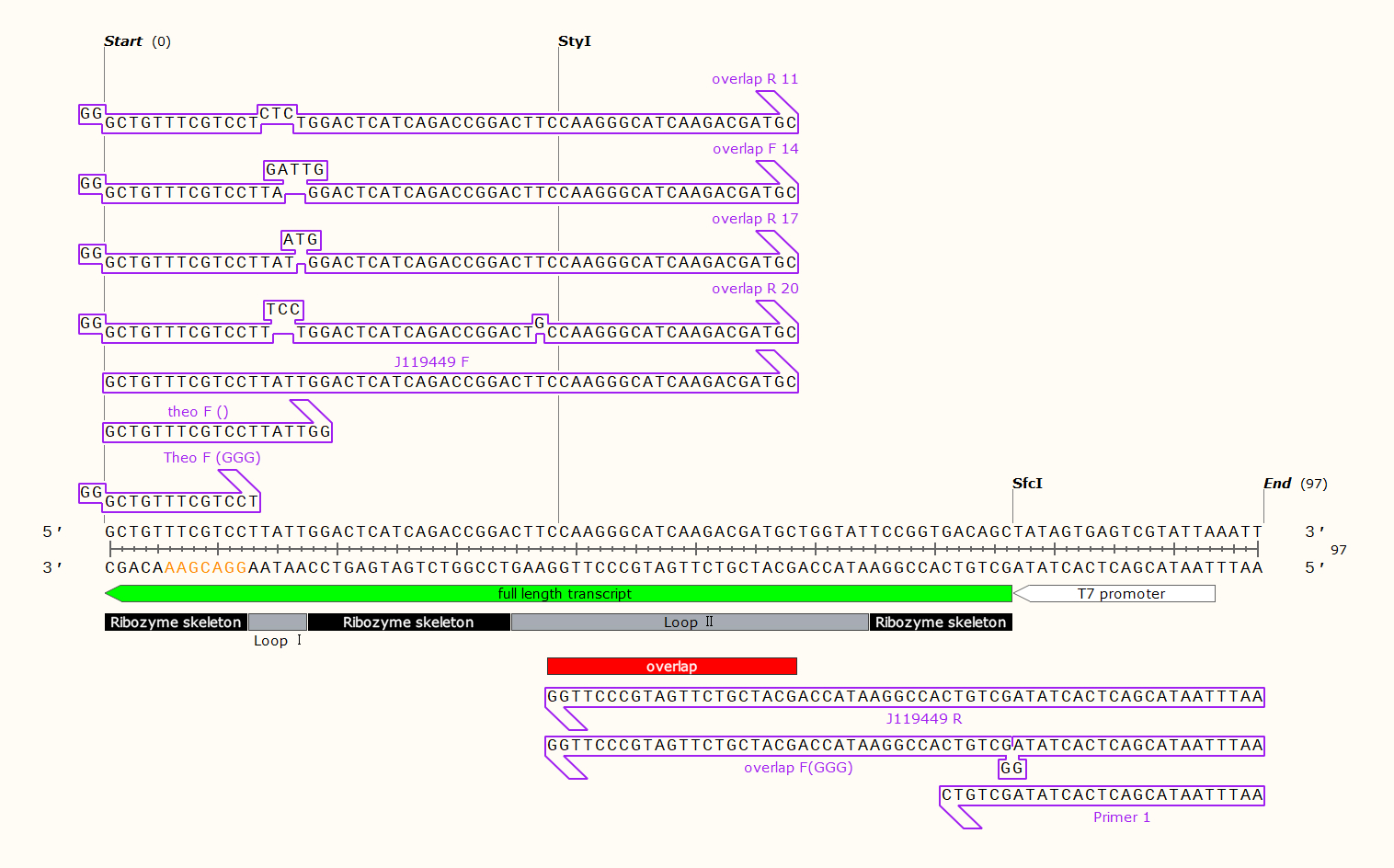 
Unfortunately, PAGE gel electrophoresis showed that such engineering caused it to lose its self-cleavage activity completely . 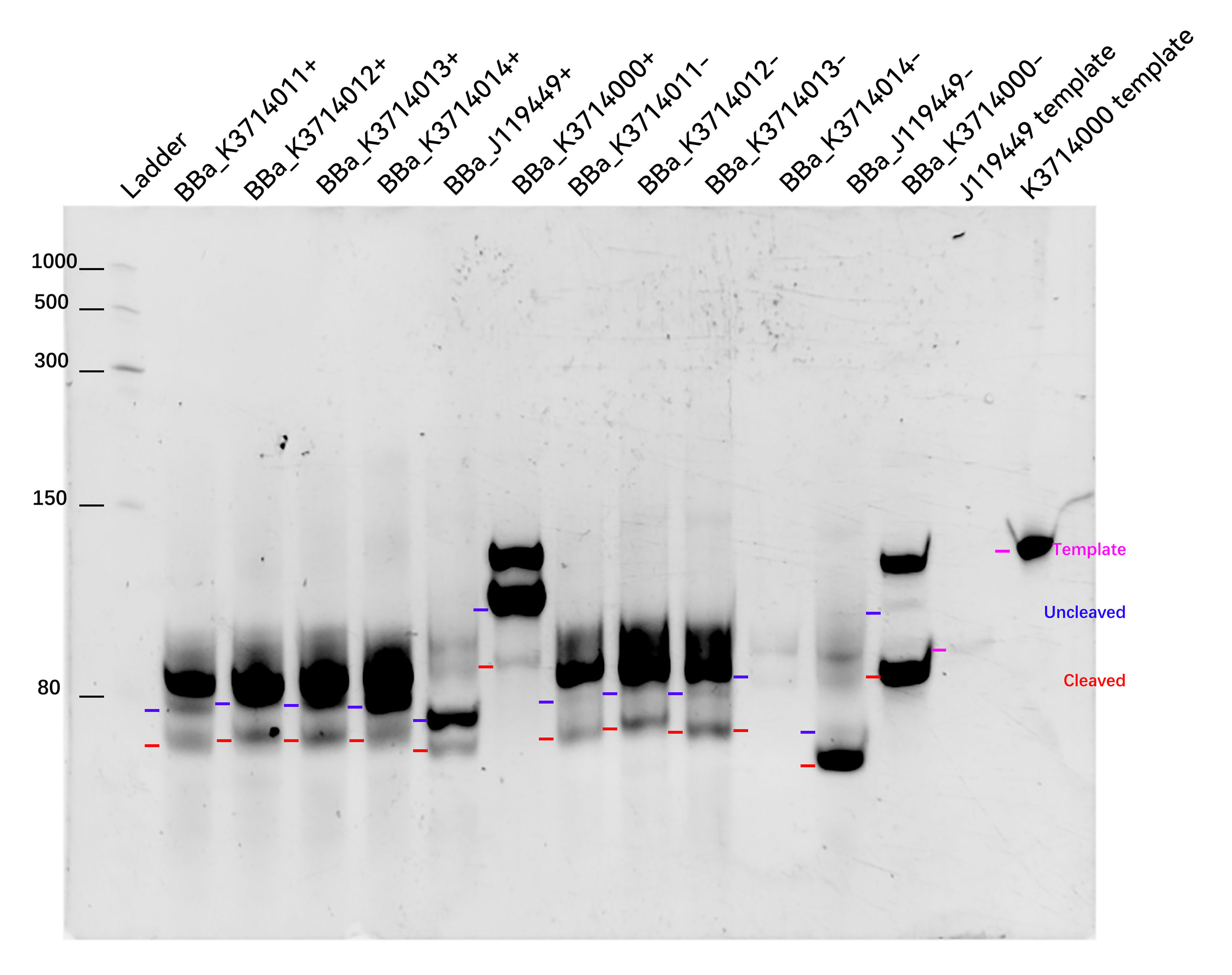 After that, We removed the added CC and strictly controlled the amount of template and consistent with the reaction system, and carried out 10 groups of in vitro transcription experiments which were compared with each other, which were as follows:

According to the results of PAGE gel electrophoresis images and grayscale analysis, we preliminarily believe that BBa_K3714004(7CG) has better sensitivity and higher transcriptional efficiency than possible BBa_J119449. So we further carried out the transcriptional reaction of the two parts under the gradient concentration of theophylline, and the self-cleavage reaction was reflected by denaturing PAGE.