We designed to find aptazyme that can specifically bind to the target through DRIVER, and added probes to both ends to ensure that it can be correctly detected on our test strips. Therefore, we can divide our engineering cycle into three parts: one is to explore the screening conditions of De novo Rapid in Vitro Evolution of RNA biosensors(DRIVER), another is to verify the function of the aptazyme we screened on a lateral flow assay test strip, and the third is to further optimize our products through toehold-mediated strand displacement(TMSD) reaction.


In this "Design-Build-Test-Learn-Design" cycle, we continuously gained experiences from the last experiment and made corresponding changes to ensure our system function correctly. On this basis, we continued to optimize our system through several engineering cycles to increase detection accuracy and shorten detection time so that our system performance is better and more competitive than similar products.

Intro: The multi-rounds DRIVER in vitro evolution process requires a lot of reagents and labor, so pre-testing should be conducted to ensure that the system works appropriately before formal screening.
Design: We followed the author’s protocol firstly. However, because of the different reagent manufacturers used by the author, some reaction conditions were modified according to the instructions of the enzyme.
Built: One DRIVER cycle was performed using aptazyme of theophylline without the addition of target, whose function is known. In the cycle, we adopted 16 rounds in hot-start PCR.
Test: We performed agarose gel electrophoresis on the final product. And we didn’t get a bright target band in two repetitions (Fig. 1a).
Learn: The secondary structure of RNA may block reverse transcription. The optimal temperature for reverse transcription is 37 ℃, but it can also work at 50 ℃. The higher temperature helps to reduce the effect of the complex secondary structure of aptazyme on reverse transcription. Design & Built: We upregulated the temperature for reverse transcription, and performed a DRIVER cycle again.
Test: We performed agarose gel electrophoresis on the final product. And we got a bright target band in two repetitions (Fig. 1b).
Learn: Multiple rounds of PCR can also amplify trace amounts of DNA to produce very bright bands. Therefore, the previous agarose gel electrophoresis results could not fully indicate that the DRIVER system work normally. T7 transcription is a critical step in the DRIVER cycle, and low transcription efficiency may lead to loss of library abundance. We then performed agarose gel electrophoresis directly on the T7 transcript but did not get bright bands.
Design: The NTP concentration adopted by the author was much higher than the concentration recommended in the instructions, so we wanted to confirm whether NTP concentration had an impact on t7 transcription efficiency in vitro.
Built: We set the NTP concentration gradients at 36 mM, 16 mM, 8 mM, 4 mM for in vitro transcription.
Test: We performed denaturing PAGE electrophoresis on the transcription products and found that the transcription efficiency and aptazyme cleavage fraction at 8 mM and 4 mM were both good (Fig. 1c). Finally, we used 4 mM (1 mM each) NTP concentration for screening. 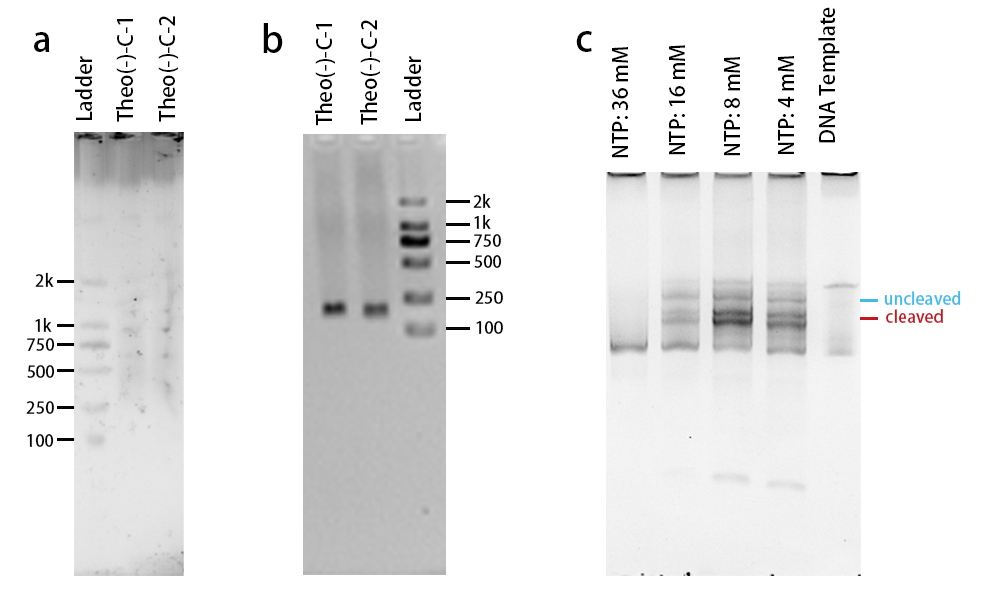 Intro: We would like to design a lateral flow assay strip to realize real-time detection using aptazyme.
Design: The lateral flow assay is comprised of the sample pad, conjugated pad, absorbent pad and NC membrane. In the detection process, the sample is added to the transcription system. Then we will add the product to the sample pad. When sample flows through the strip, one end of intact aptazyme will bind to probes on T line, and the other will bind to probes modified by AuNPs. The AuNPs-oligo conjugate will concentrate and form a visible line in the test zone. The intensity of the red color will be positively correlated to target concentration in samples (Fig. 2). 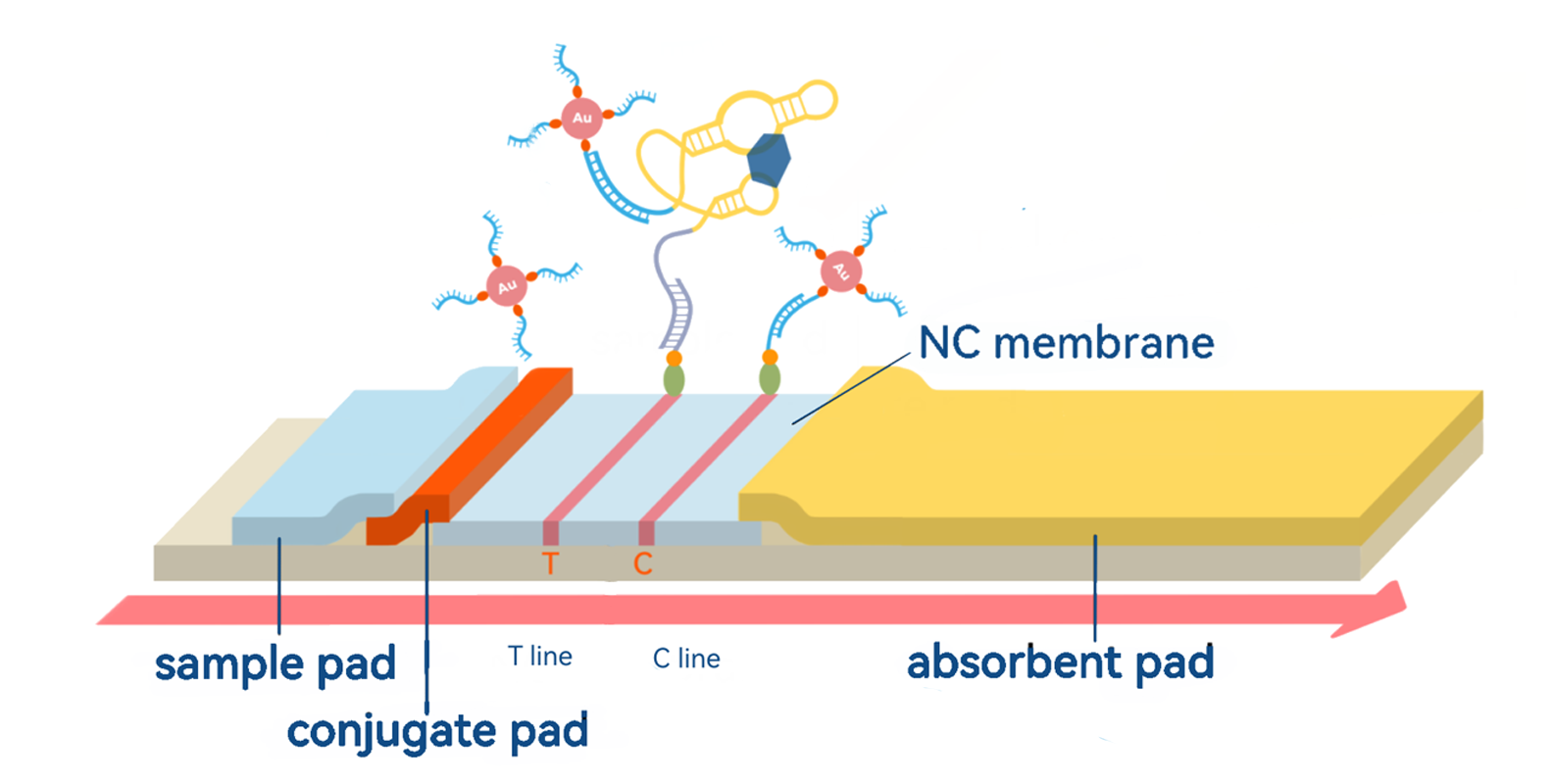 
Built: We got AuNPs-oligo conjugate via gold-sulfur coordination reaction between AuNPs and the thiolated DNA probes and then dispensed the conjugate to the conjugate pad. Streptavidin reacts with the biotinylated DNA probe, forming streptavidin-biotin DNA conjugate. We dispensed the conjugate to NC membrane, and then DNA probes bound to NC membrane with the help of streptavidin.
Test: We used the unbalanced PCR to get ssDNA to test the strip. However, we didn’t find a visible line in the test zone (Fig. 3a top).
Learn: The streptavidin (SA) to biotinylated DNA probe ratio may affect the result. Typically, one molecule of streptavidin can bind four molecules of biotin.
Design: We can increase the biotinylated DNA probe to streptavidin ratio to increase the intensity of the DNA probe at the test zone to improve the result.
Built: We tried adjusting the streptavidin (SA) to the biotinylated DNA probe at a ratio from 1:3 initially to 1:6.
Test: We found a visible line in the test zone when the streptavidin (SA) to biotinylated DNA probe ratio was 1:6 using unbalanced PCR product (Fig. 3a bottom).
Learn: RNA is easy to degrade. We need to carry out in vitro transcription to obtain RNA aptazyme in detection, and realized the detection by its recognition with the target molecule, so the degradation of RNA in vitro will be an essential factor affecting the detection.
Design: In the preliminary design, we only relied on Murine RNase Inhibitor added to the transcription system to inhibit RNA degradation, but it didn't work well. Later, we chose to add RVC (Ribonucleoside Vanadyl Complexes) to the loading system to inhibit RNA degradation in the process of transcription.
Built: We added 4 microliter transcription product mixed with 4 microliter 200 mM Ribonucleoside-vanadyl complex and 72 microliter PBS (free of RNase) onto the sample pad.
Test: We can find that T line performed better in the group added with RVC than that in group without RVC (Fig. 3b) with other conditions equal (In both transcription systems, the concentration of gardiquimod in transcription was 300 μM). After the above adjustment, the test strip worked normally and reflected different concentrations of the target through the intensity of red color successfully (Fig. 3c-d). 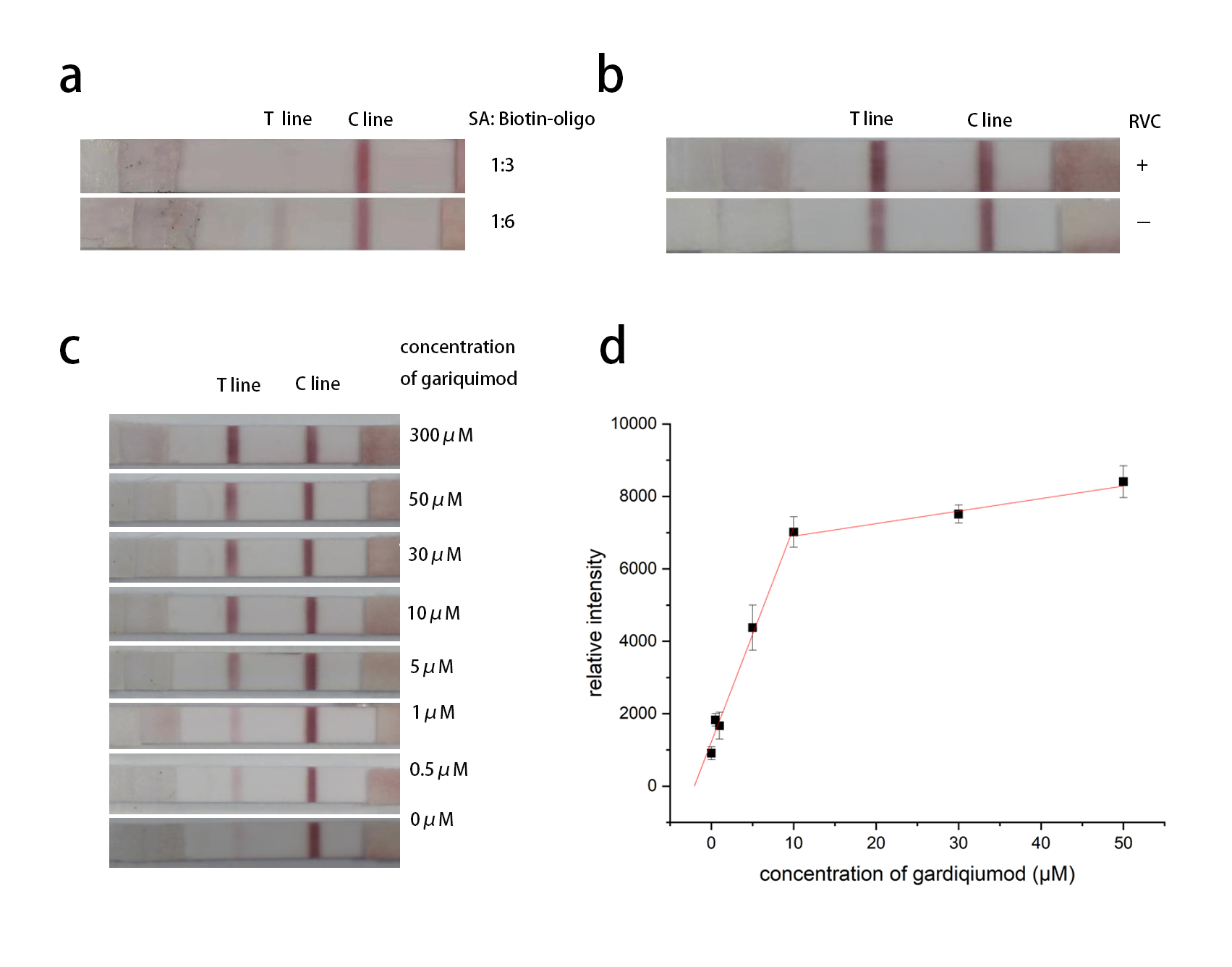 Intro: After the test strip functioned normally, we hope to optimize the testing time and reduce the cost further. We wanted to use TMSD reaction to reversibly regulate the activity of aptazyme, so that it can remain intact during synthesis and regain its cleavage activity during detection. In this way, the time-consuming and expensive T7 transcription step can be avoided in the kit.
Design: We first designed a complementary sequence stop1 based on the region where the active center of ribozyme is located, hoping to use it to block ribozyme activity. At the same time, 6 non-complementary bases are extended at one end of the sequence, which are used as the toehold site for the start1 to induce the strand displacement reaction (Fig. 4).


Build: We ordered these two oligos and put the stop1 into the t7 transcription reaction system at a final concentration of 20 μmol/L.
Test: We ran the product on the denaturing PAGE electrophoresis, and it was observed that the expected uncleaved band did not appear after the stop was added compared to the transcription system without stop oligo (T7 (contrast)) (Fig. 6a).
Learn: After we consulted with Professor Song Jie, he pointed out that our RNA stem-loop structure is too complicated so that the complementary strand cannot combine with it. And then, the activity of the ribozyme will not be affected.
Design: The end of aptazyme is a simple linear paired region. And using our probe design model, we added 10 bases without complementary pairings outside this region as the toehold site prepared for stop oligo to compete with the original structure of aptazyme. We redesigned stop5 and start5 oligo for this region (Fig. 5). 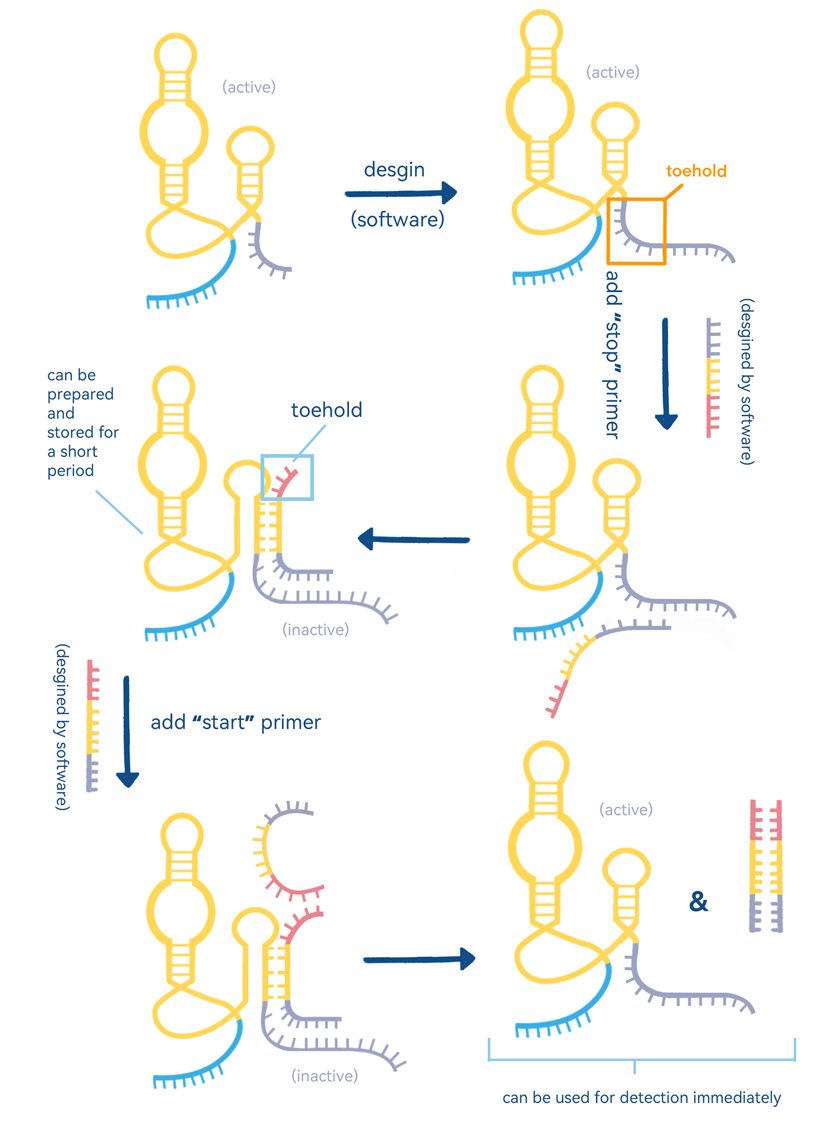 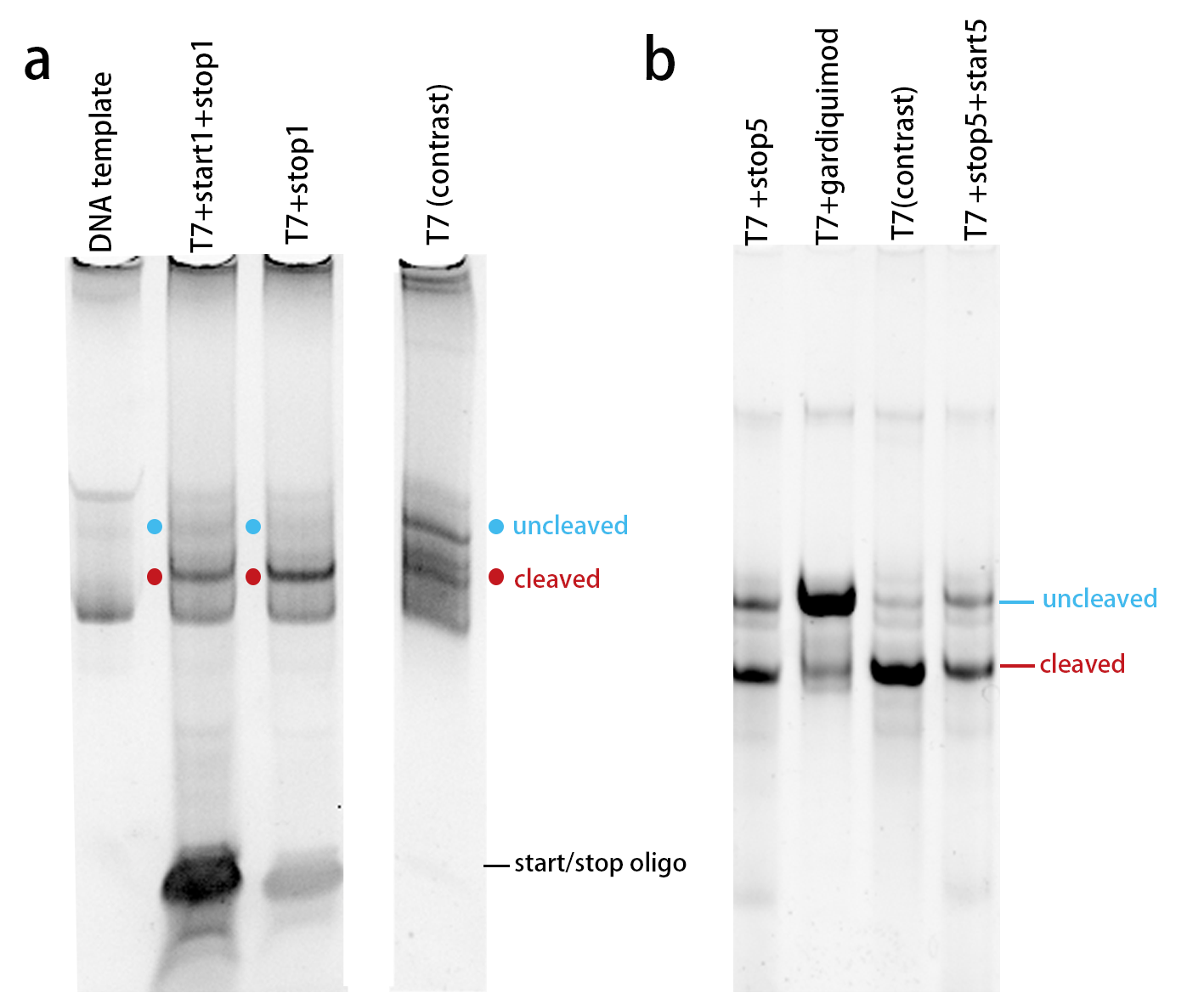 
Learn: By consulting the literature, we learned that in the TMSD reaction, the secondary structure of the invader (stop or start) itself will greatly affect the TMSD reaction3.
Design: We hope to improve the existing model and further design stop and start oligos with no secondary structure and no mismatch with aptazyme, and try to achieve better cleave activity regulation effects. We are currently working on this, but we have not yet gotten perfect results due to the proximity of the deadline.

Ending: Throughout the season, we first determined our project theme through a lot of researches and brainstormed a rapid development platform for quick inspection kits. Then through the continuous cycle of "Design-Build-Test-Learn-Design", we determined the optimal conditions for the screening system and LFA, and finally screened out the aptamyze sequence that can specifically bind to our target. It is verified that the gardiquimod aptamyze can also work normally, and the concentration of the target is correctly reflected on the test strip. At this point, it also declared the success of our entire project engineering.