Except the Gard-337 sequence with W prefix and X suffix used for testing and modulating DRIVER system, all templates used for transcription were obtained by overlap PCR. Two long primers with 20~30-mer complementarity sequence (Tm=60~63℃) were chemically synthesized to form the full-length template in the first 10 rounds of PCR. 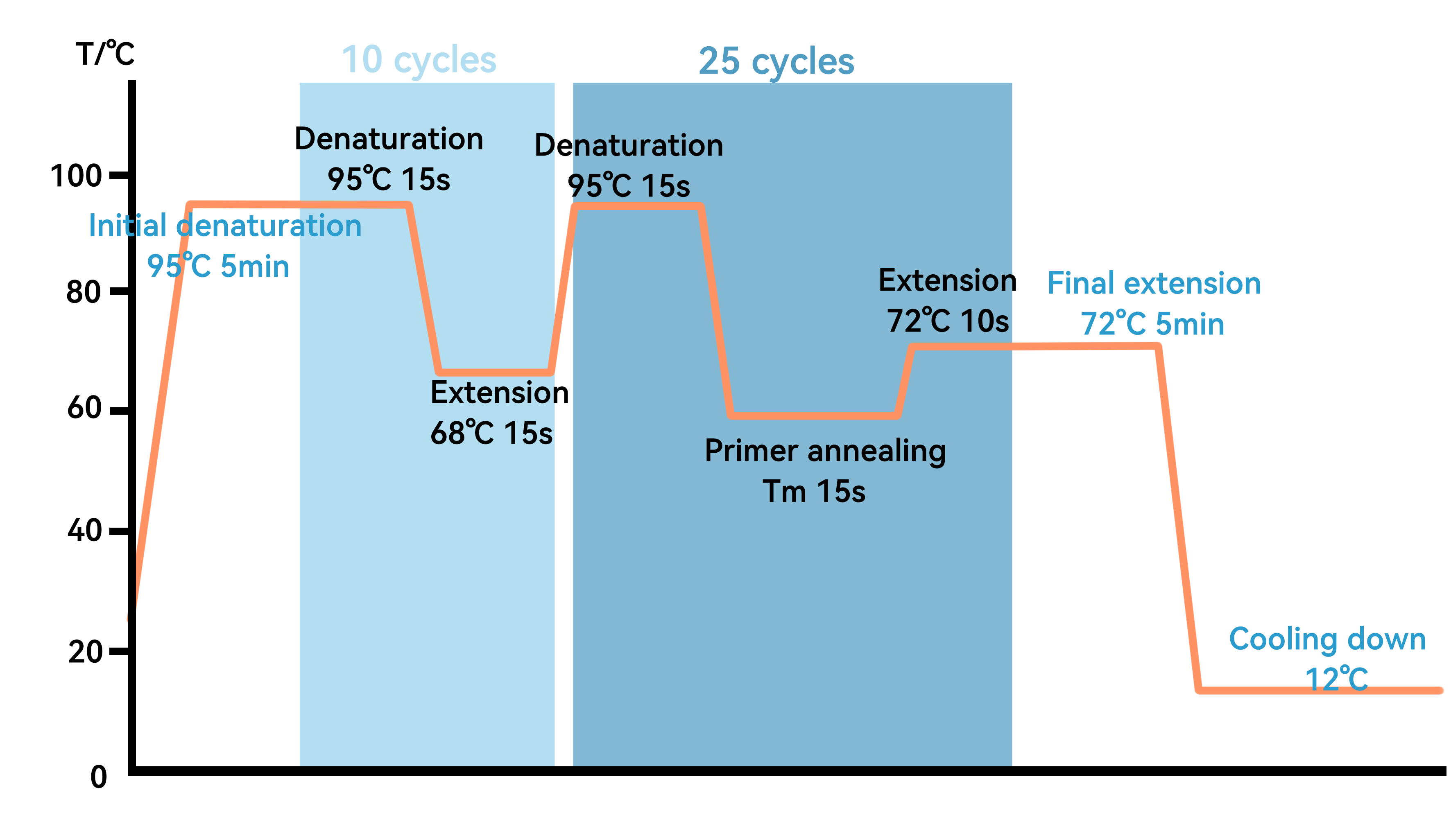 
DNA templates of aptazyme Gard-337 (with or without probes on both ends) were synthesized on plasmid pUC-57. The inactivated form (with a G12A mutation) was acquired by Hieff MutTM Multi Site-Directed Mutagenesis Kit (11004ES10, Yeason). The products were transformed into E.coli. Plasmids in monoclonal colonies were extracted (DC201-01, Vazyme) and amplified before sequencing to confirm mutation.


For analyzing aptazyme templates (~120 bp dsDNA), we used 2% agarose gel with 0.5x TBE buffer. Gelred (TSJ002, Tsingke) was added either in gel or in loading buffer to a final concentration of 1x. All lanes, unless noted otherwise, were run in 6x loading buffer (TSJ010, Tsingke), and DL2000 (TSJ011, Tsingke) was used as reference. The gel was imaged with a Tanon 3500 Gel Imaging System.

For analyzing in vitro transcription products (~100 nt ssRNA), at first we tried 1% denatured agarose gel with 6.3% formaldehyde and MOPS buffer. The resolving power is not good. As a result, 10% denaturing PAGE with 8 M urea and 1x TBE buffer was chosen to assess the cleavage characteristic of RNA aptazymes. The transcription reaction was 1:1 mixed with 2x RNA loading dye (B0363S, NEB), denatured at 65 ℃ for 10 min in a thermocycler, and chilled immediately on ice. The gel was equilibrated by pre-electrophoresis at 160 V for 20 min in a Mini-PROTEAN ® Electrophoresis System (Bio-Rad) in advance. Electrophoresis was performed at 240 V for 30~45 min until the bromophenol blue dye reached the bottom of the gel. The gel was then stained with 3x Gelred for 10~30 min before imaging with a Tanon 2500B Gel Imaging System.

Designing and preparing libraries for in vitro evolution


Libraries were designed based on sTRSV hammerhead ribozyme (i.e., replacing the loop I and II with two random loops of 5~7 bp or 30/60 bp, then adding A-rich sequences at both ends to minimal unwanted interaction). A T7 promoter was prepended to allow transcription in vitro. A total of 12 libraries were diluted to 3.33 μM each with 40 μM T7 promoter (BT88p) in TE7.8 buffer. The mixtures were incubated at 95 ℃ for 2 min and cooled at 0.5 ℃/s to allow annealing with T7 promoter. The product was used as input in the first round of DRIVER.


The pipeline could be automated by applying a liquid handling system with proper modules (i.e., a thermocycler and a shaker). As we didn't have these modules, we performed DRIVER by ourselves. As we have explained in design, alternating (+) and (-) rounds were done. To improve efficiency, we prepared master mixes on ice in advance. Every reaction, once finished preparation, should be vortexed briefly and spinned down. Master mixes shouldn't be used when stored for more than 12 hours. All water used in experiments, unless noted otherwise, were treated by DEPC to remove RNase. RNAseZap® (AM9780, Thermofisher) was used to clean gloves during transcription and RT. 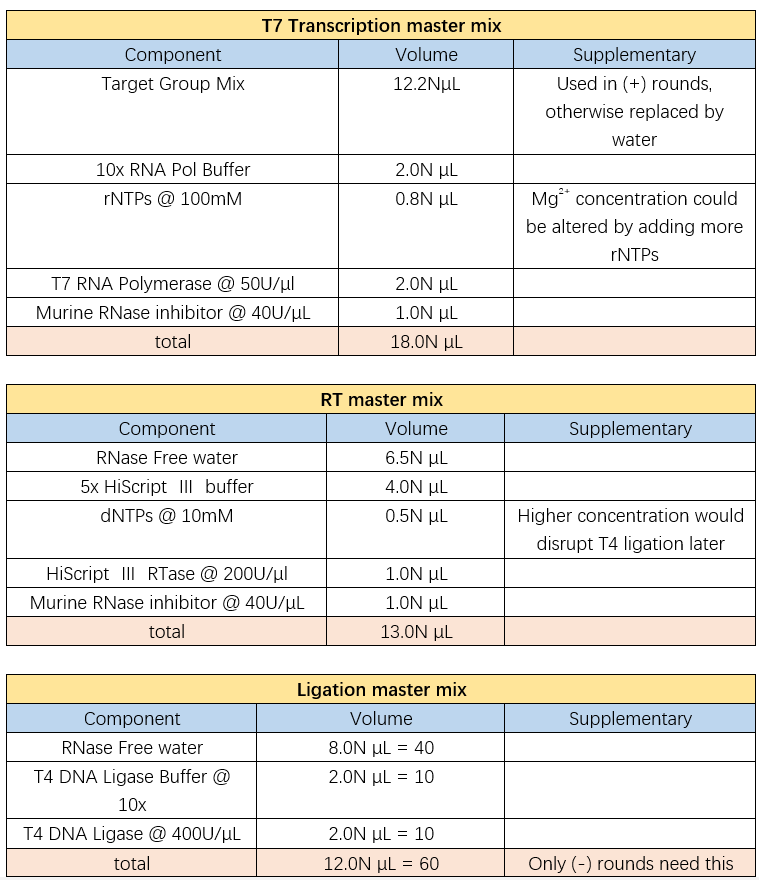 (+) rounds included transcription, RT, and hot start PCR, while (-) rounds need ligation reaction in addition. The PCR product of N round was used as transcription template in N+1 round. RT primer used in (+) rounds was designed to transform RNA into DNA simply, thus we used a PCR primer (BT575p). RT primers used in (-) rounds were designed to change the prefix to generate a selection pressure preferring cleaved sequences. Thus BT1508p was used to change prefix from W to Z, and BT1316p was used to change prefix from Z to W. Primers used during hot start PCR was chosen based on the product of interest (e.g., use BT1285p to amplify sequences with W prefix when changing prefix from Z to W or the prefix is W per se). 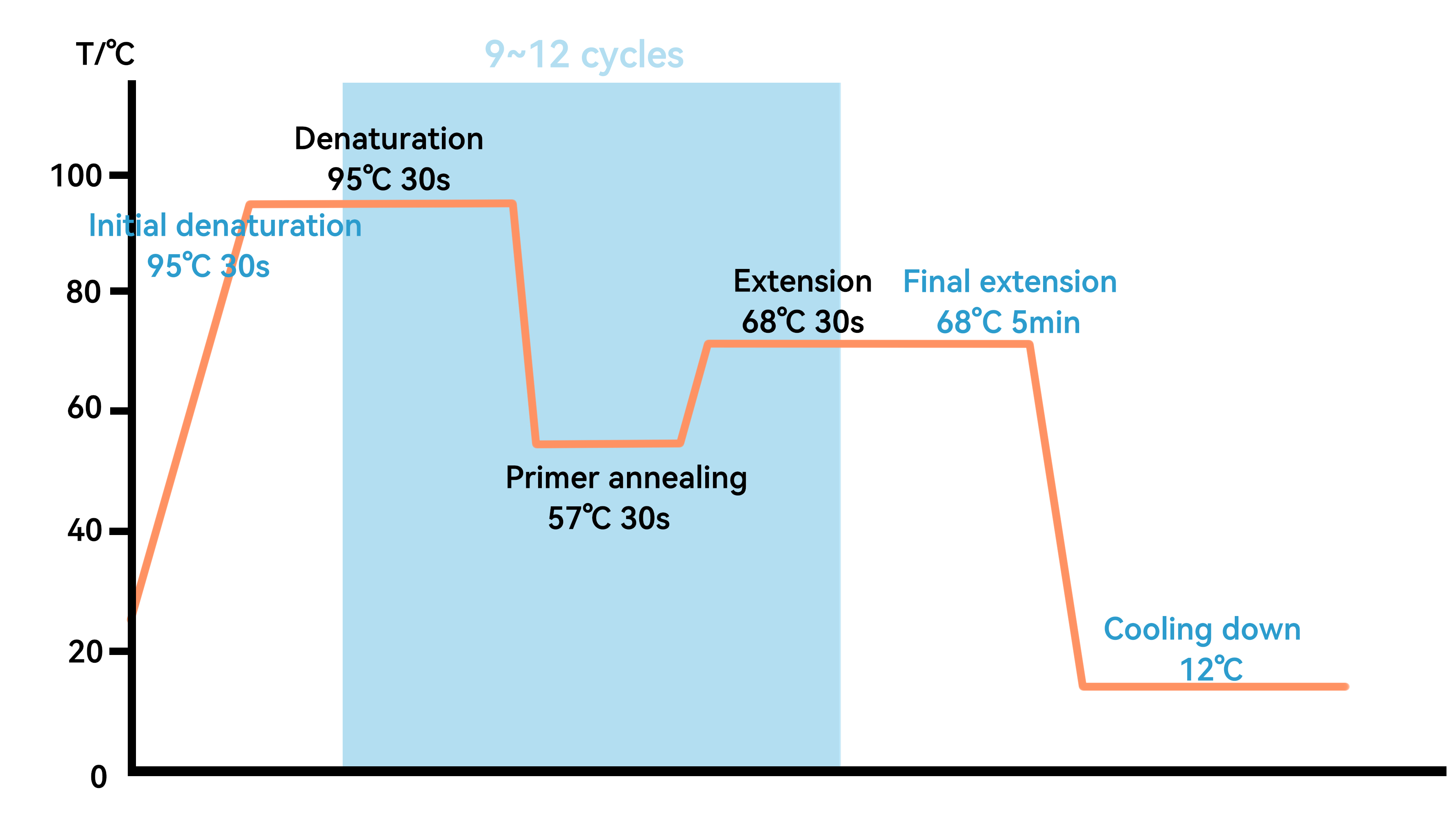 
The target groups used in R5~R30 include: 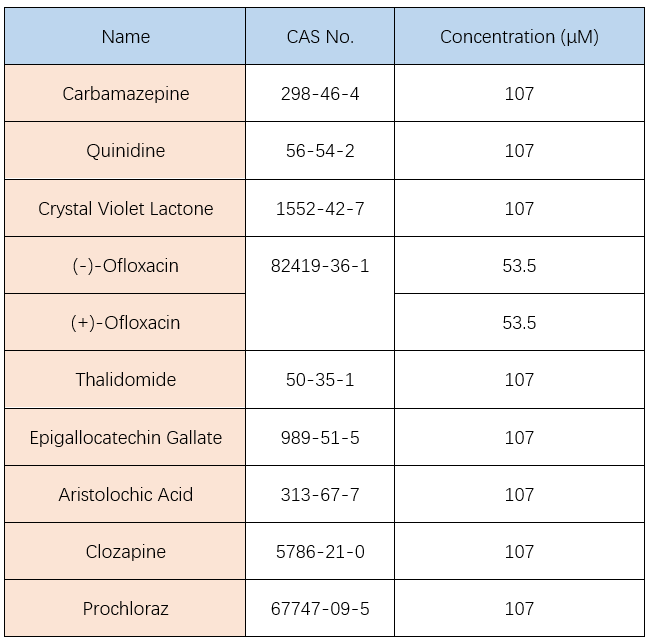 Molecules above were dissolved in DMSO first at ~10 mg/ml before being diluted into admired concentration in water. 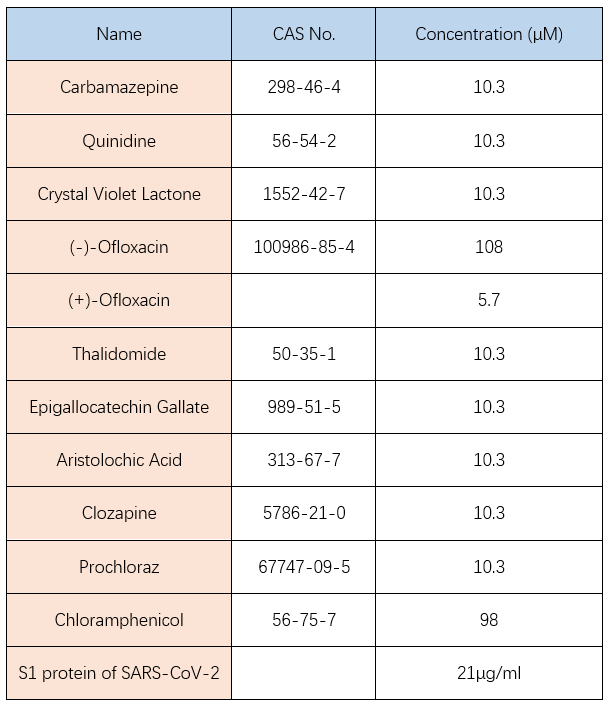 
Hot start PCR product of (-) rounds (We used round 31 and round 55, respectively) were used as input of CleaveSeq. The concentration of dsDNA was determined by dsDNA HS Assay Kit for Qubit® (12640ES60, Yeasen) at first. Then the library was diluted ~1,000,000x to a final concentration of 7.5 fg/ml in 0.1 μg/ml salmon sperm DNA (H1060, Solarbio). The dilution was amplified under the following protocol. Thorough mixing should be guaranteed during every step described above. 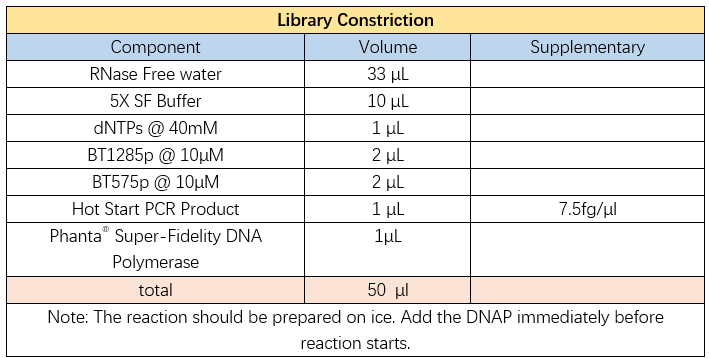 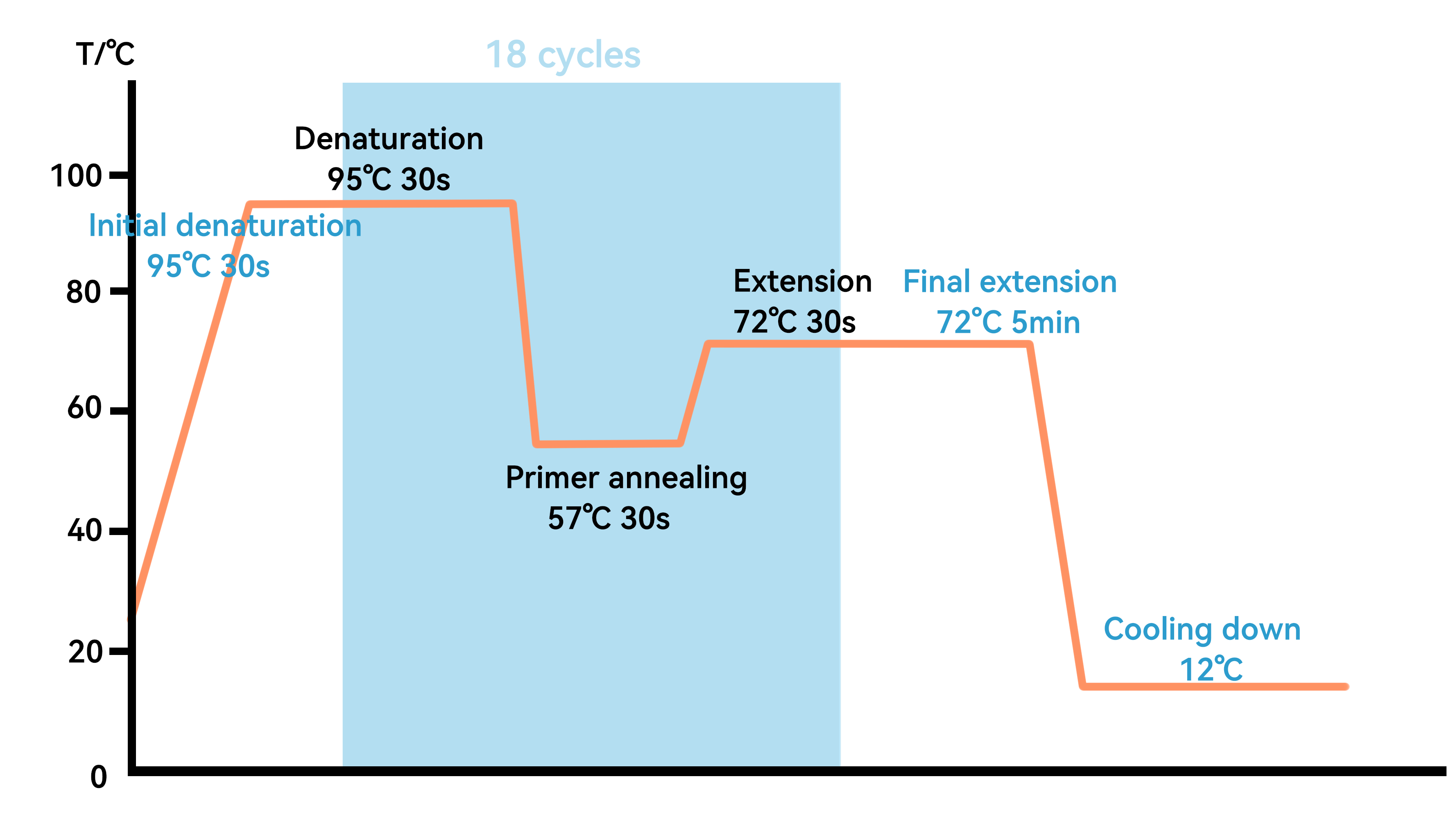 The product could be used as the template of transcription. We also prepared master mix of T7 transcription, RT, and ligation for CleaveSeq as we had done in DRIVER. The hot start PCR reaction was replaced by another high-fidelity PCR.

The reference group includes 4 reference sequences at 200 pM each, which have a similar structure to library. They were designed to normalize the abundance of each sequence in the library.

RT primer used here was designed to change the prefix from W to Z. Since BT1508p has some unwanted bases at digestion site, Z_stop was used in RT. PCR primer groups used here were designed to add NGS adapter on both sequences with W prefix or Z prefix. To acquire specifity, some primers (WFU, ZFC and XRC) were blocked by a /3Spc3/ modification. 4 different primer groups with identical function were used to distinguish samples.

PCR, purification and sequencing were performed by gene-sequencing company NovelBio.
For the details of the data analysis process, click here to view our model website.

Preparation of test and control zones

Assembly of the lateral flow strip


Template of aptazyme was transcribed with target detected existing. And then 5 μL transcription product was mixed with 4 μL 200 mM RVC (BBI Life Sciences) and 70 μL PBS (free of RNase). The mixture was added to the sample pad. After the lateral flow assay was completed, the bands on the NC membrane were imaged with a Tanon 2500B Gel Imaging System and then analyzed by Image J.

With the efficient stop oligo, the secondary structure of aptazyme will be broken and the self-cleaving activity will be inhibited. This transcription product can be stored for a short period (a few days) that substantial degradation won`t happen.
Then 1N μL start oligo mixed to the stopped transcription product will be enough for competing the stop oligo down. And the refolded correctly aptazyme will show the cleaving activity again.