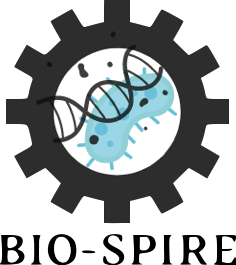 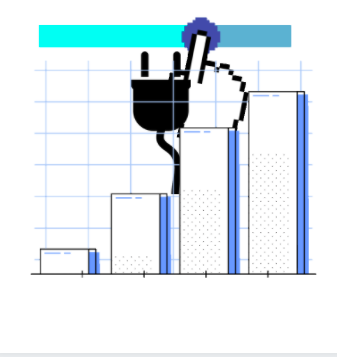 We manufactured an aptasensor to detect the presence of sepsis-related soluble biomarkers. However, detecting the binding between biomarkers and their receptors - aptamers, in this case - is a challenging task, as the concentration of biomarkers in sweat is very low. To reliably detect the binding of biomarkers to aptamers, we conducted cyclic voltammetry using a low-cost potentiostat that we made. Cyclic voltammetry is a method used to study mechanism and kinetics of reactions on electrodes.1 This method allows us to monitor current changes at working electrode while maintaining the constant voltage difference. In our project, cyclic voltammetry was essential for characterizing modified sensing devices. It is conducted using a potentiostat, which was not accessible for our team and, therefore, we decided to manufacture a low-cost potentiostat.

To test if our potentiostat was sensitive enough and could reliably detect different concentrations of the analyte in the electrode, we prepared different concentrations of salt (NaCl) and ran cyclic voltammetry. We prepared the following concentrations of NaCl: 1M, 0.5M, 0.1M, 0.05M, 0.001M, 5uM, 1uM, 100nM, 50nM, 5nM, and 1nM. Then, we connected the screen-printed electrode to the potentiostat circuit. The circuit was connected to JUAMI, which was a software that showed the current changes at the fixed potential difference. We set the voltage scan rate to be 0.1 V/s, from -2 V to 2 V for 10 cycles - 200 seconds. The electrode was immersed into the solution and we started cyclic voltammetry. We plotted the results (Figure 1). 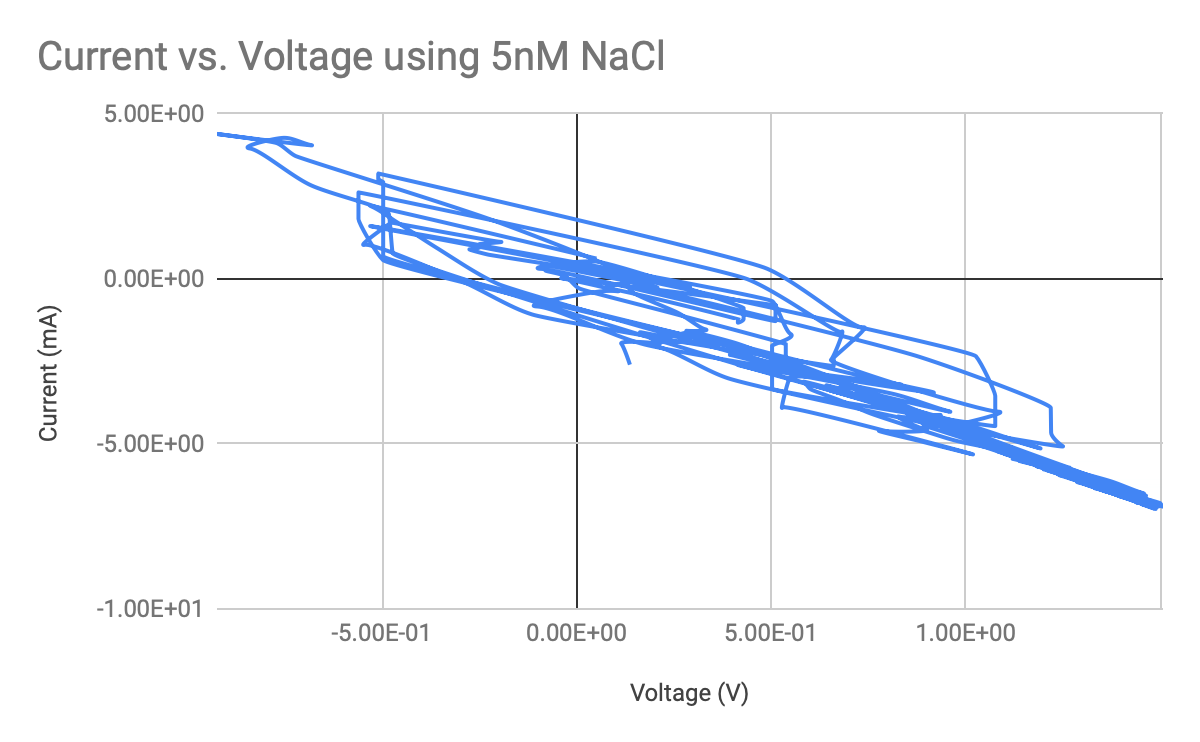 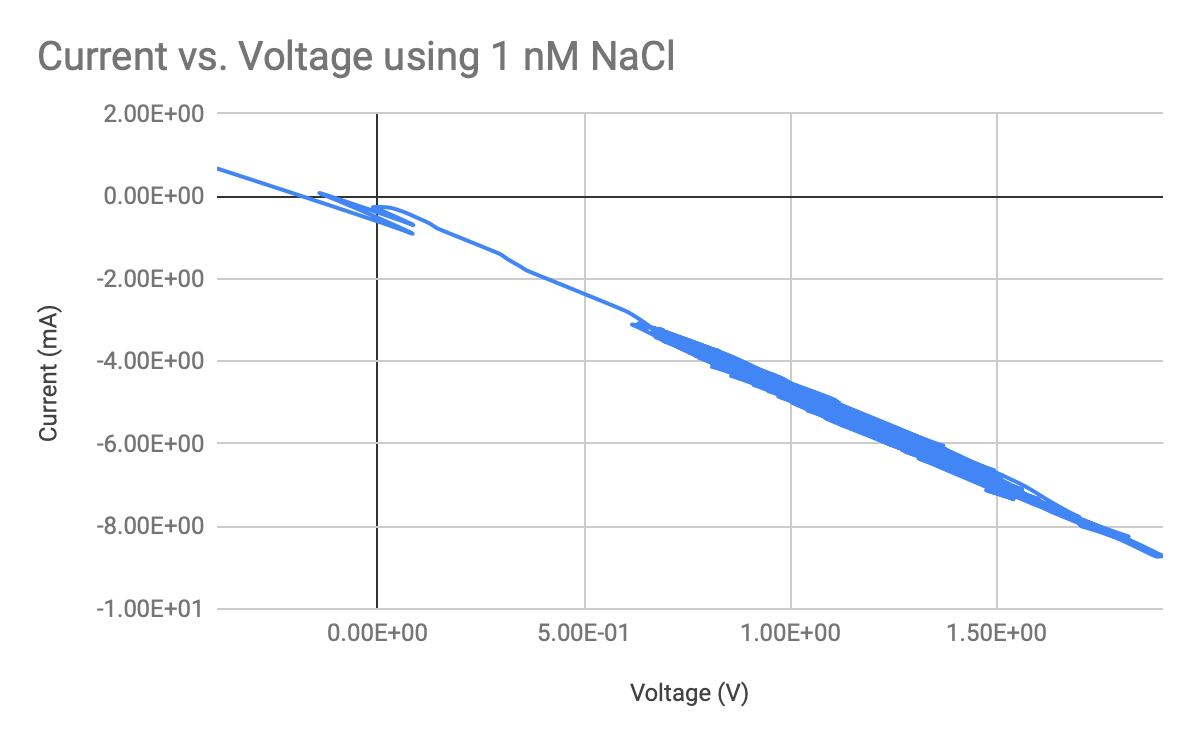 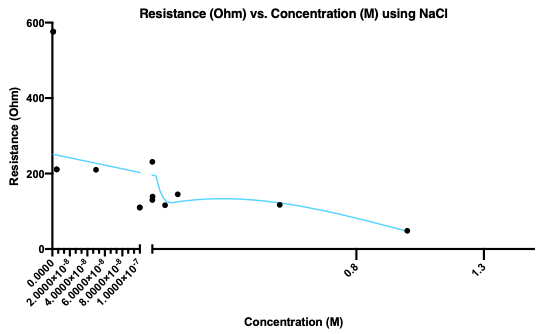 Figure 2: Resistance values of electrode as the concentration of NaCl increases. 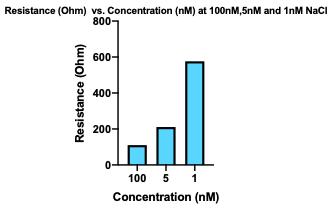 Figure 3: Resistance of electrode at the lowest concentration of NaCl.

To show that our aptasensor could detect the presence of a biomarker in sweat, we prepared concentrations of CPR and lactoferrin biomarkers from 1000nM and 1.9nM. First, we modified the working electrodes with either the solution of rGO and 10 nM of aptamer or with rGO, which was a control. We used cyclic voltammetry to detect electrical changes once the biomarker binds to the aptamer. We connected our potentiostat to JUAMI software, and we set the scan rate as 100 mV/s with voltage oscillating between -2 to 2 V. We ran 10 cycles, which was 200 seconds, for each experiment. 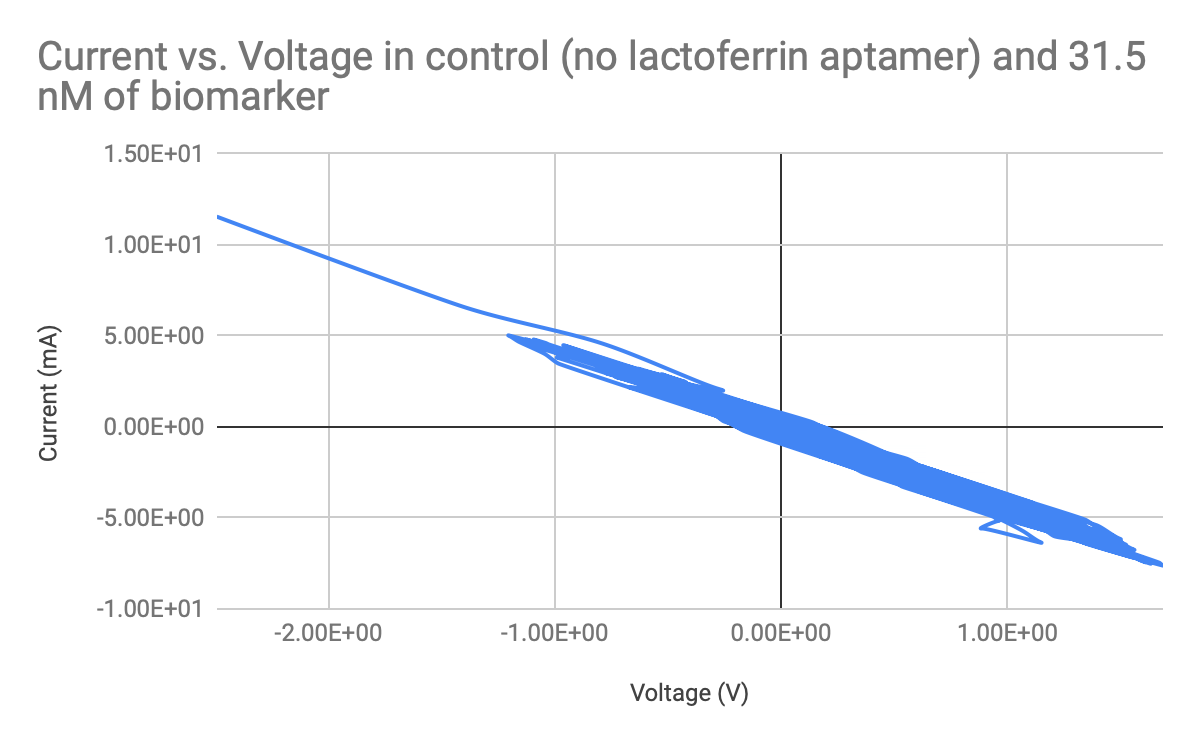 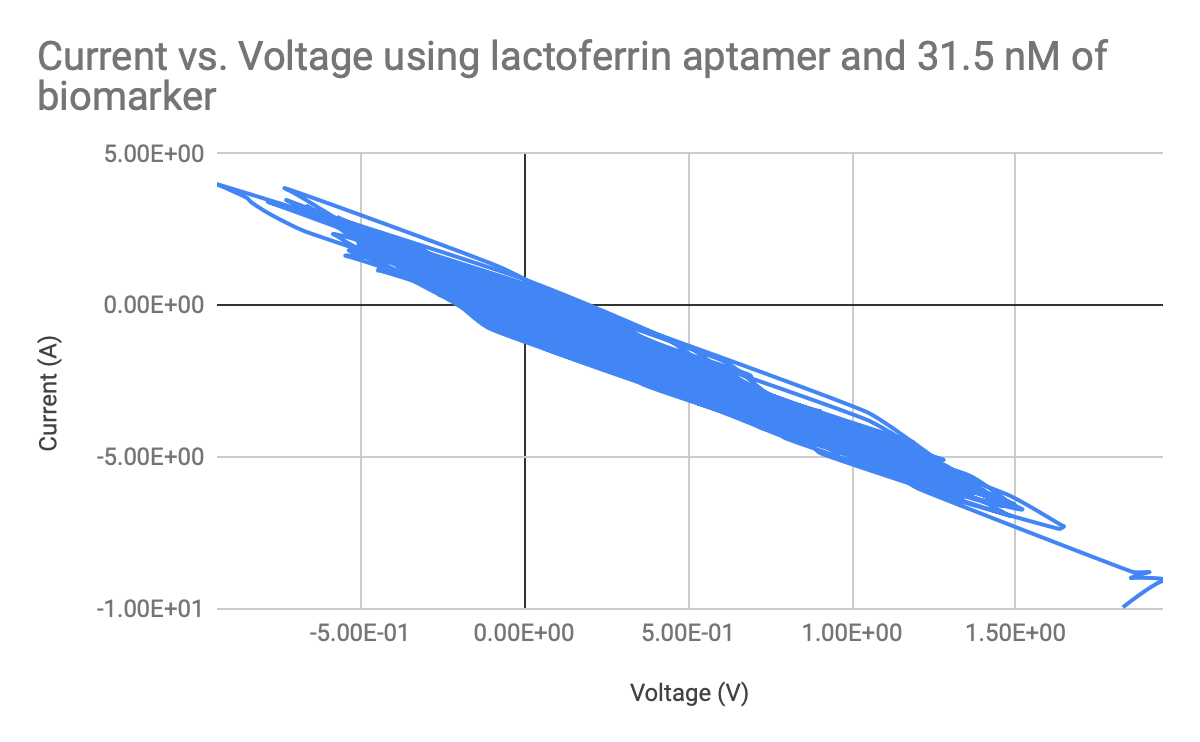 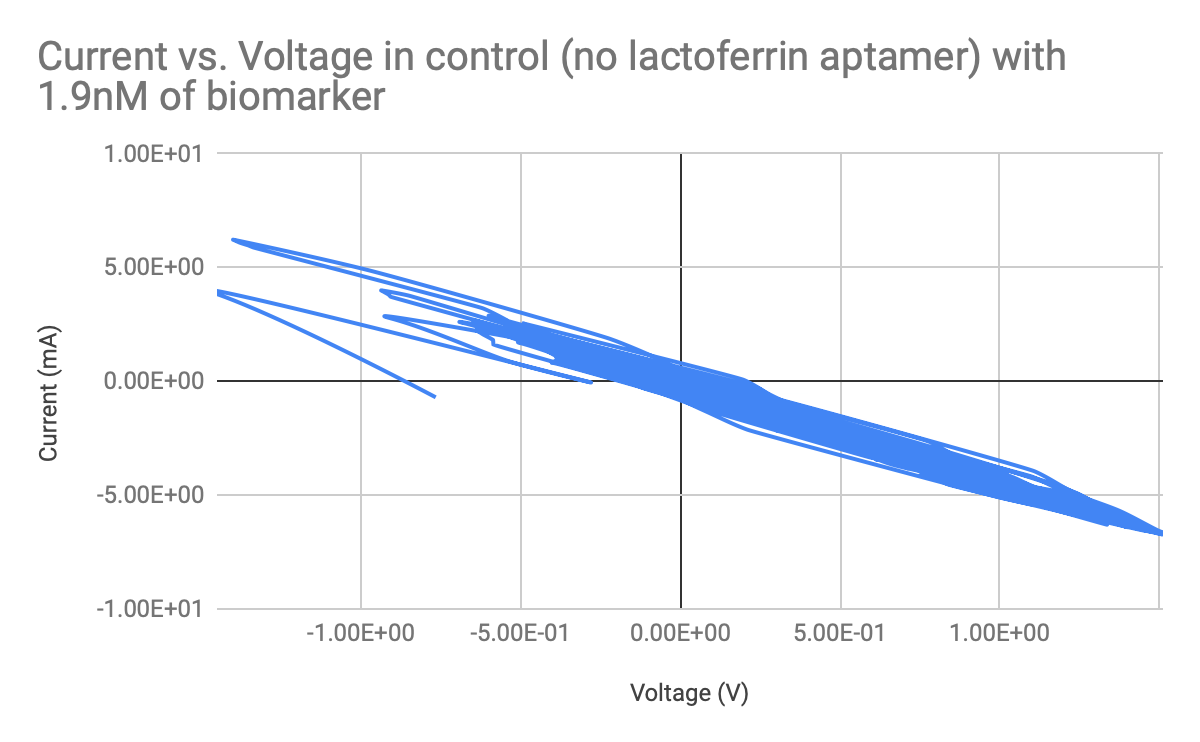 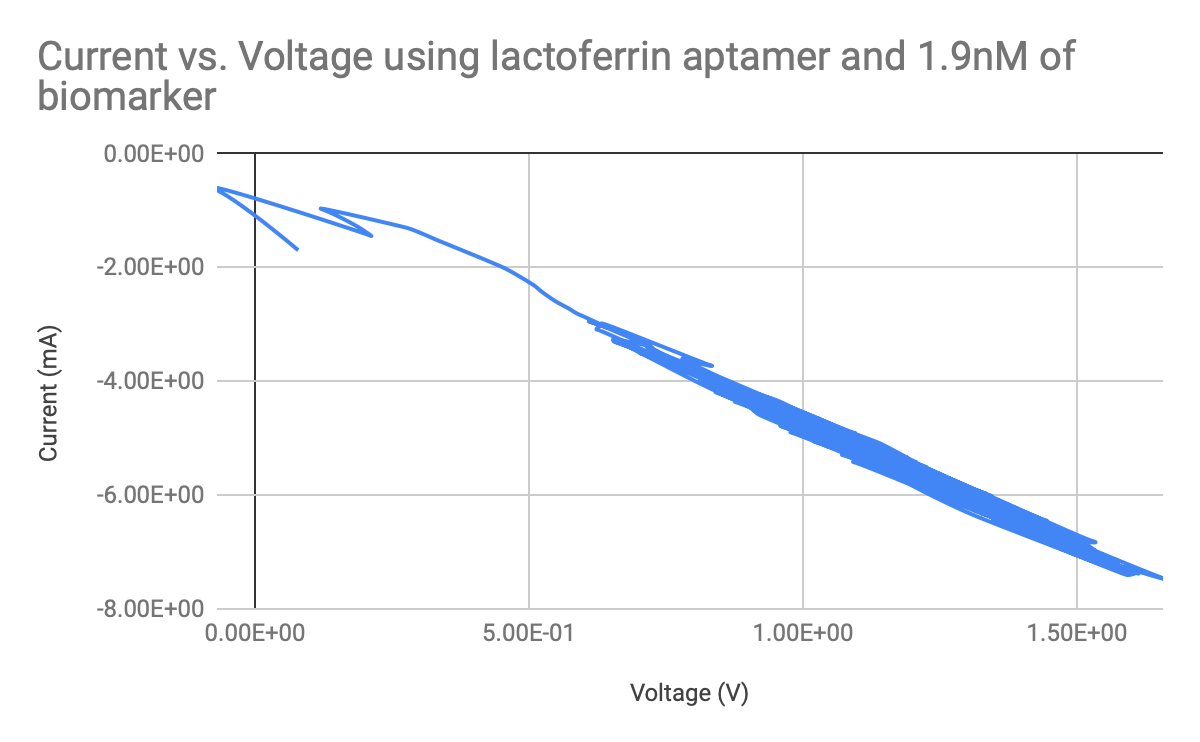 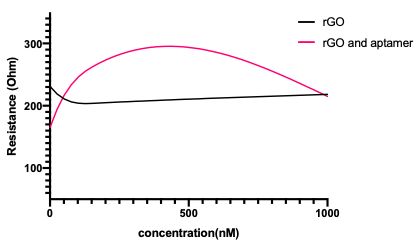 Figure 5: Resistance of rGO sheet vs. the concentration of lactoferrin biomarker.

Similarly, we ran the same experiments for CRP biomarker and aptamer. We prepared concentrations of CRP biomarker from 1000nM and 1.9nM. As before, we tested adding a biomarker solution to the electrode modified with either the solution of rGO and 10 nM of aptamer or with rGO, which was a control. In Figure 6, when the concentration of CRP was 62.5 nM, we observed that the peak current when the electrode was not modified with aptamer (control) was about 5 mA. In contrast, the peak current on electrodes covered with both rGO and CRP aptamer was 1.5 mA. Similarly, at the CRP concentration of 7.8 nM, the current peak was 10 mA in control and 1 mA in the aptamer-modified electrode. 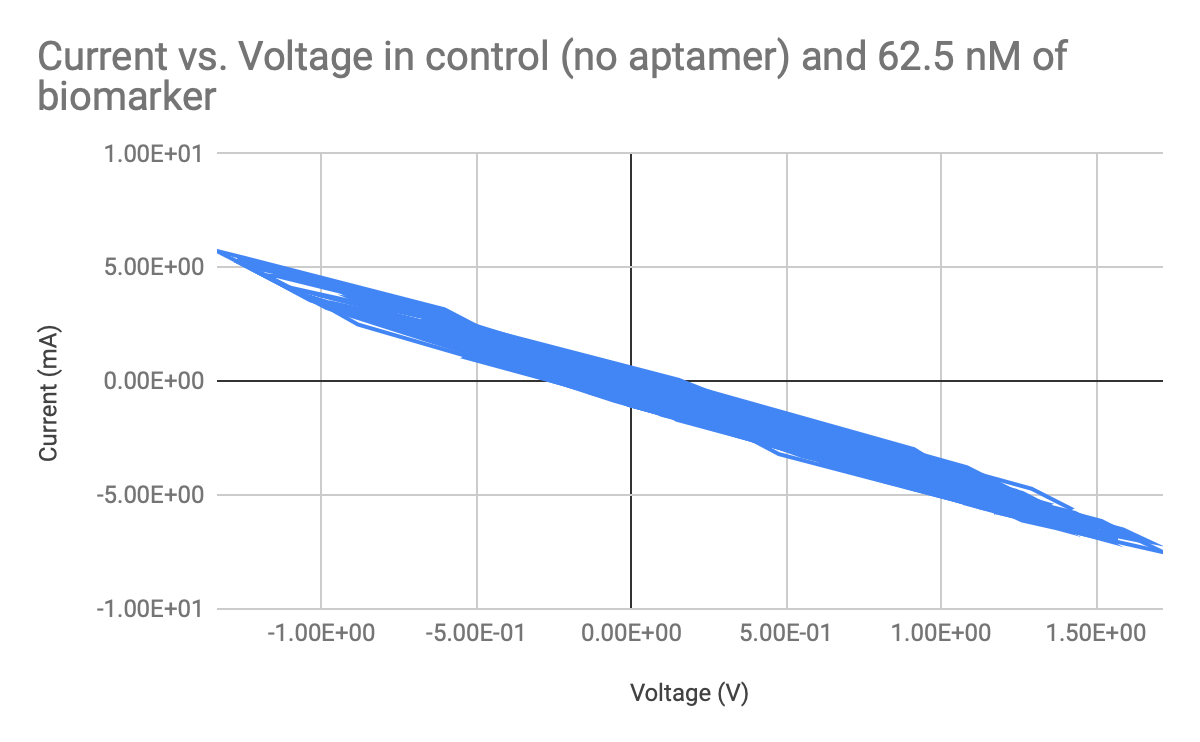 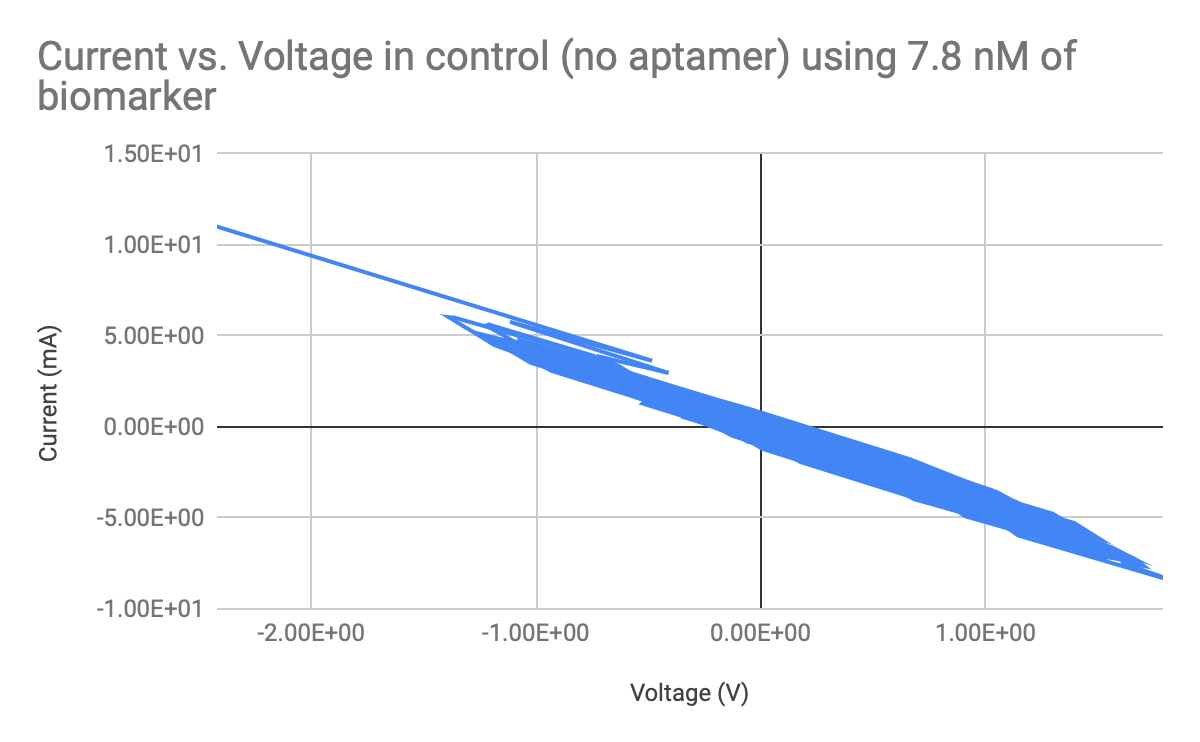 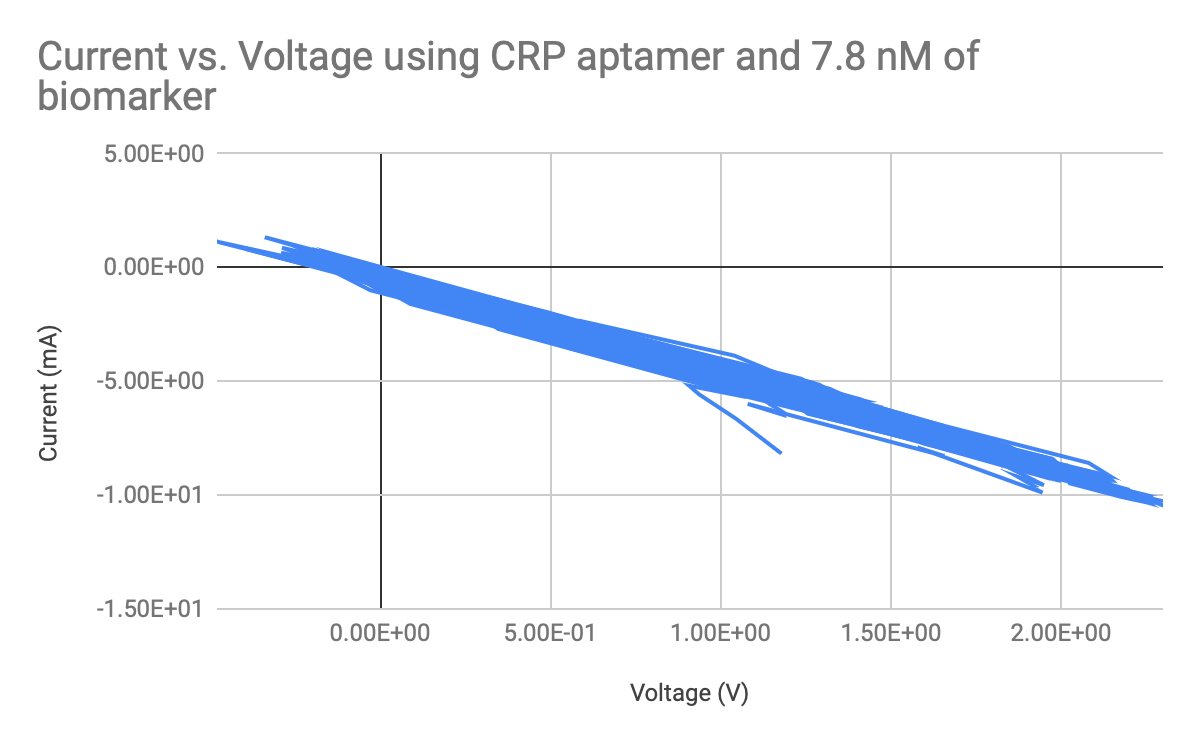 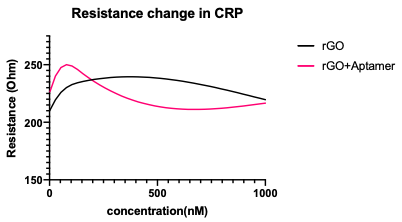 Figure 4: Concentration of CRP against the resistance of rGO sheet.

Results did not show a clear difference between electrodes treated with rGO and rGO and CRP aptamer. The change in resistance at varying concentrations of biomarker was a bit smoother in the control, but the difference in resistance change was not as clear as with lactoferrin. One reason for observing these results might be due to the imprecise attachment of rGO and aptamer to the working electrode. The limitation of attachment of aptamer to the rGO could be optimized by using spacers and a covalently linking method, such as azide linking to PEI-modified rGO. We didn’t want to do this in order to keep our device as accessible as possible. Additionally, the binding affinity of CRP is 6.2 pM, and we prepared the concentrations of biomarkers in the nM range. Using such a high concentration of biomarker compared to its binding affinity might have led to the saturation of electrodes with the biomarker. Therefore, the potentiostat could not have detected any change in binding between aptamer and biomarker as all the biomarker concentrations were too high.

We used two types of controls: no aptamer attached to the rGO and no biomarker in sweat. In previous experiments, we deposited either rGO and aptamer or just rGO on the top of the working electrode. Attaching just rGO to the electrode would show whether there is any non-specific binding of biomarker to the electrode. Then, we prepared the second control, where we added only sweat (without biomarkers) to the electrode that was either modified with rGO and aptamer or modified with just rGO. If different current peaks were detected on the electrode modified with aptamer, as compared to electrodes without aptamer, then our aptasensor was not actually detecting the binding of biomarkers in the previous experiment. The change in peak current detected earlier could have just been due to the aptamer modification interacting with the buffer in which the biomarker was dissolved in. We prepared sweat solutions at two different pH values, added them to the electrode and ran cyclic voltammetry, using the same parameters for voltage scan rate, voltage difference and number of cycles as before. Figure 8 shows that the current peak did not shift when sweat was added to the electrode without an aptamer, and electrode with aptamer. 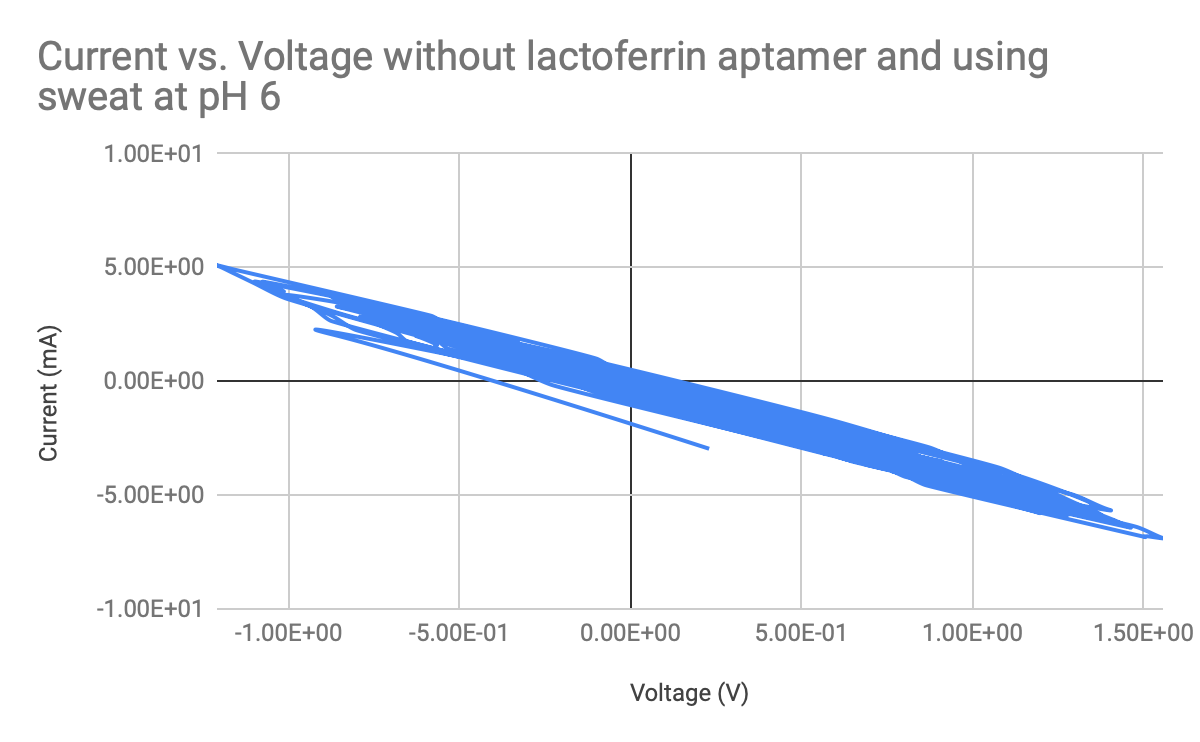 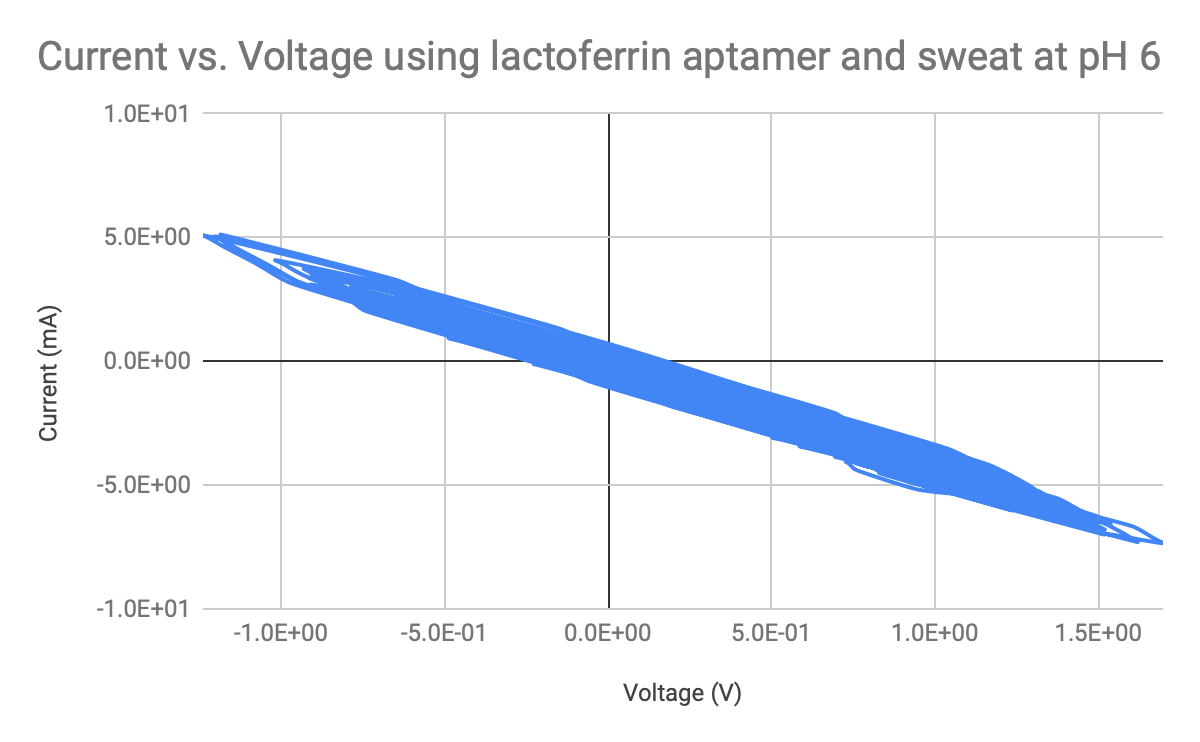 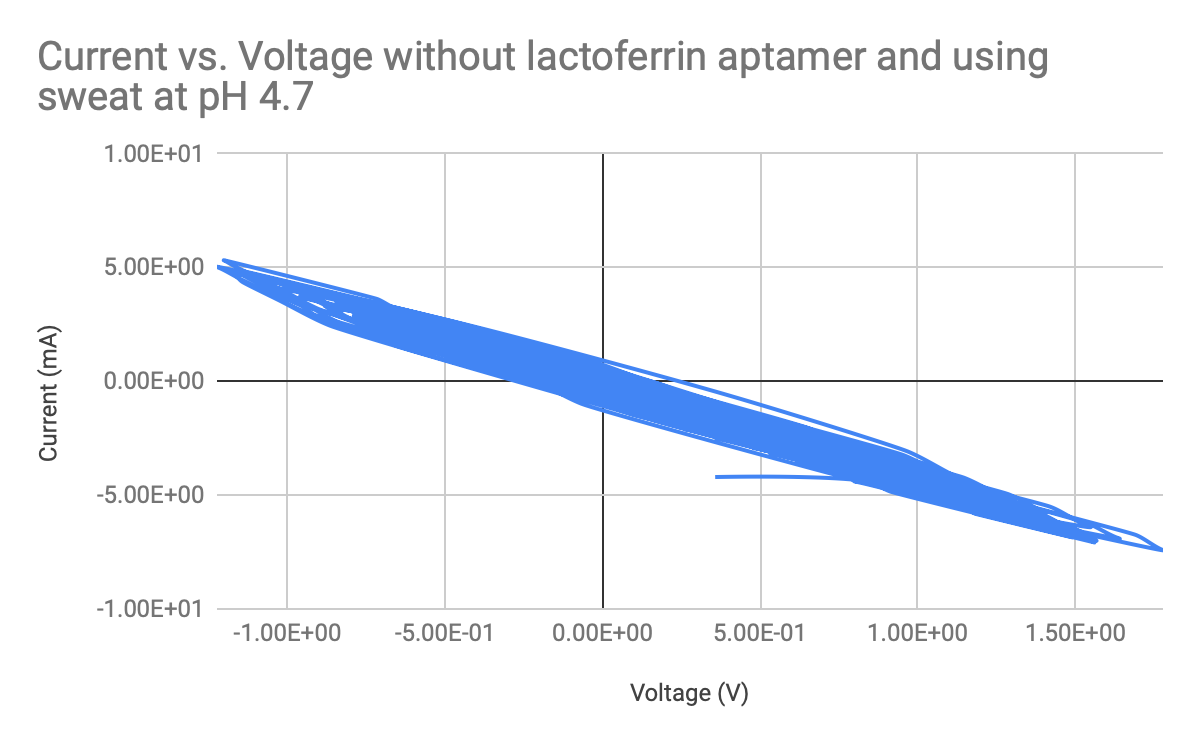 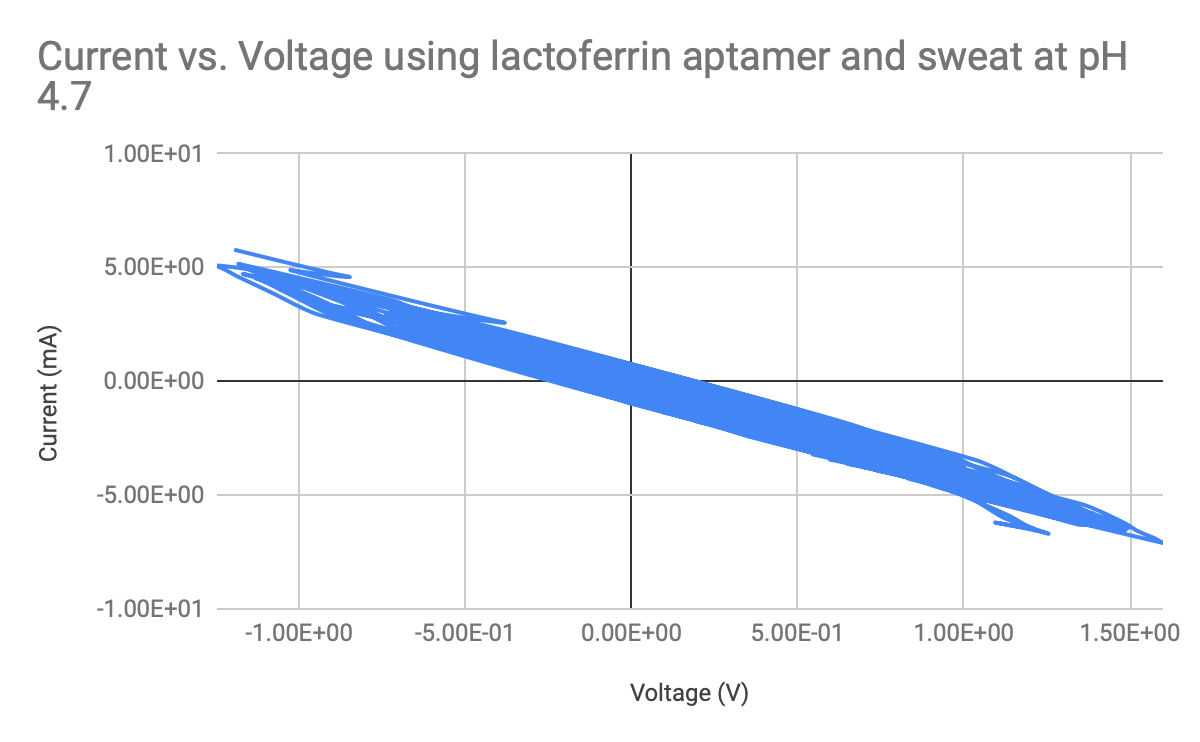 Resistance values for each condition were found using the peak current and corresponding voltage (Table 4). Figure 9 showed that the current peak did not shift when sweat was added to the electrode with rGO, and electrode with rGO and aptamer. This shows that the change in peak current detected in aptamer-biomarker binding was not due to the aptamer modification interacting with the buffer in which the biomarker was dissolved in, but rather that the current shift only occurred when biomarker was present in sweat.

Resistance values for each condition were found using the peak current and corresponding voltage (Table 3).

To show that our potentiostat is user-friendly, we asked students majoring in software engineering, psychology, math and data science to use our potentiostat to conduct cyclic voltammetry. We prepared the solution of 5mM potassium ferrocyanide and 0.1 M potassium chloride in 5 ml of water, according to the protocol we got from our gold partner. Then, we explained to students what potentiostat does and how we built it. Then, as we ran a demonstration of the experiment, we explained what cyclic voltammetry is and why it was important for our project. The students asked about what the potentiostat output was, how we analyzed the data and where the potentiostat was generally used. 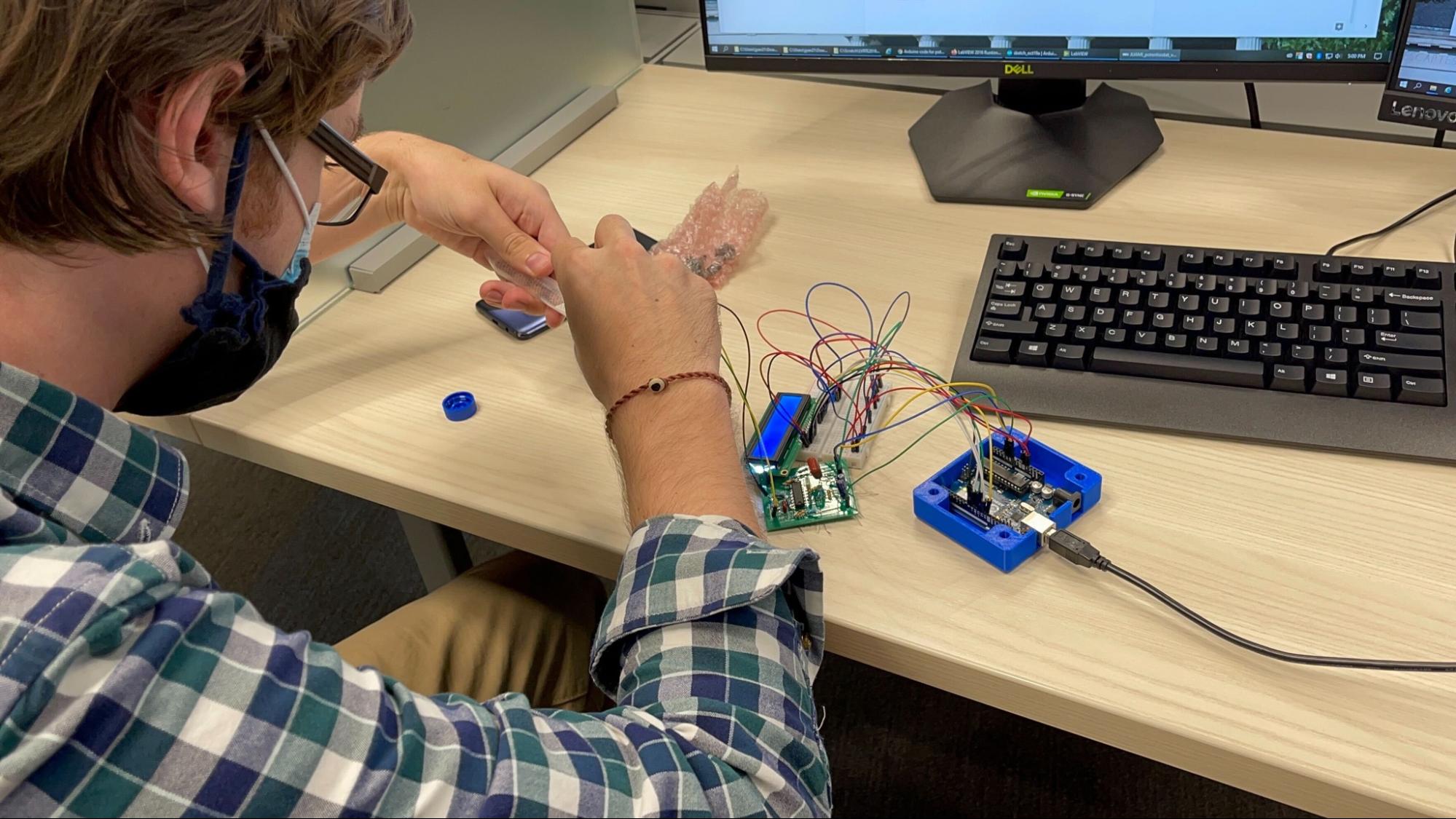 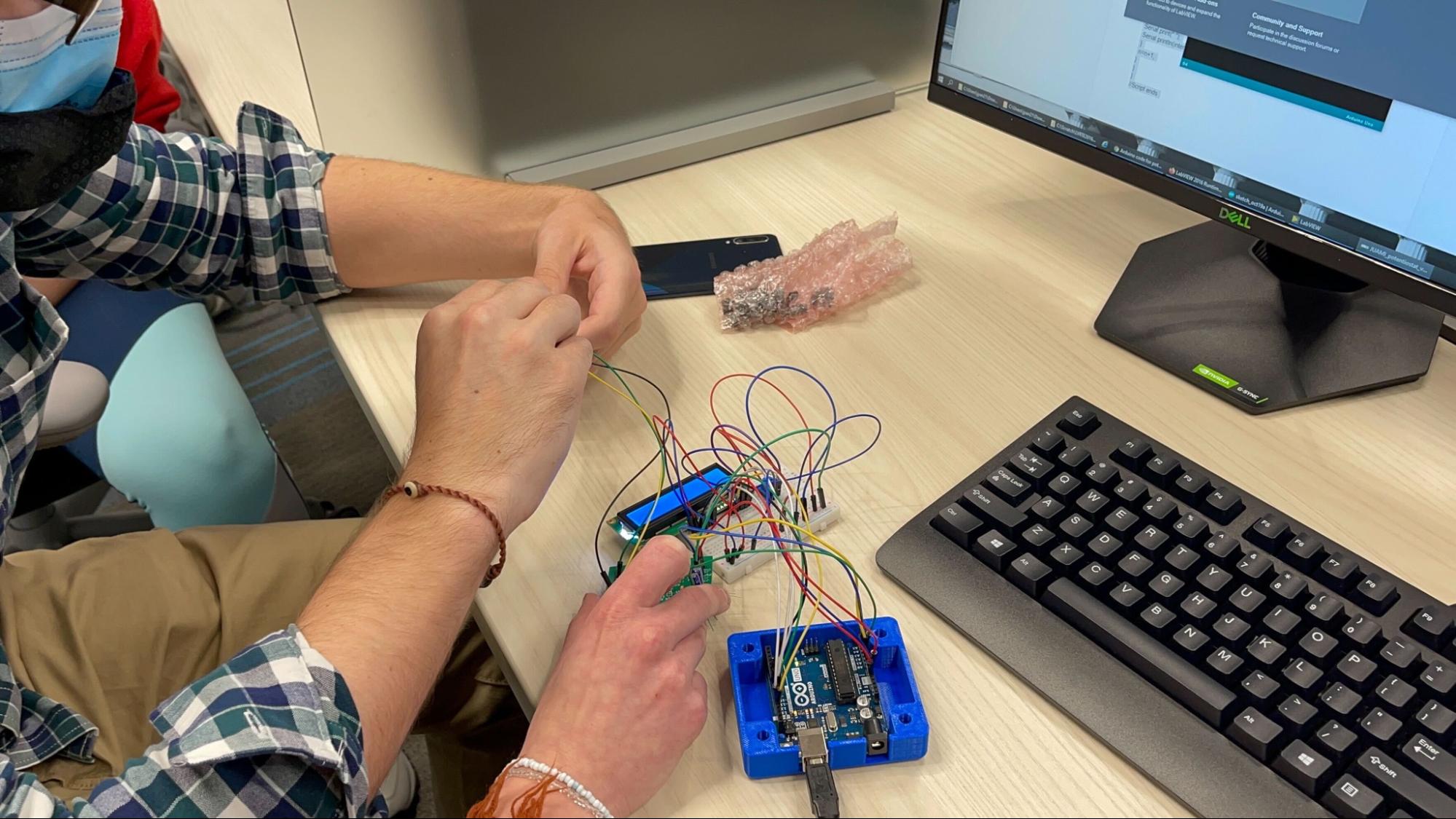 Undergraduate students at University of Rochester test our potentiostat.

We asked students to run cyclic voltammetry of the solution we prepared. Figure 7 shows the results of three students running cyclic voltammetry. In the graph A, the student accidentally dropped the electrode and we did not observe the smooth decrease in current as we did in other two graphs. 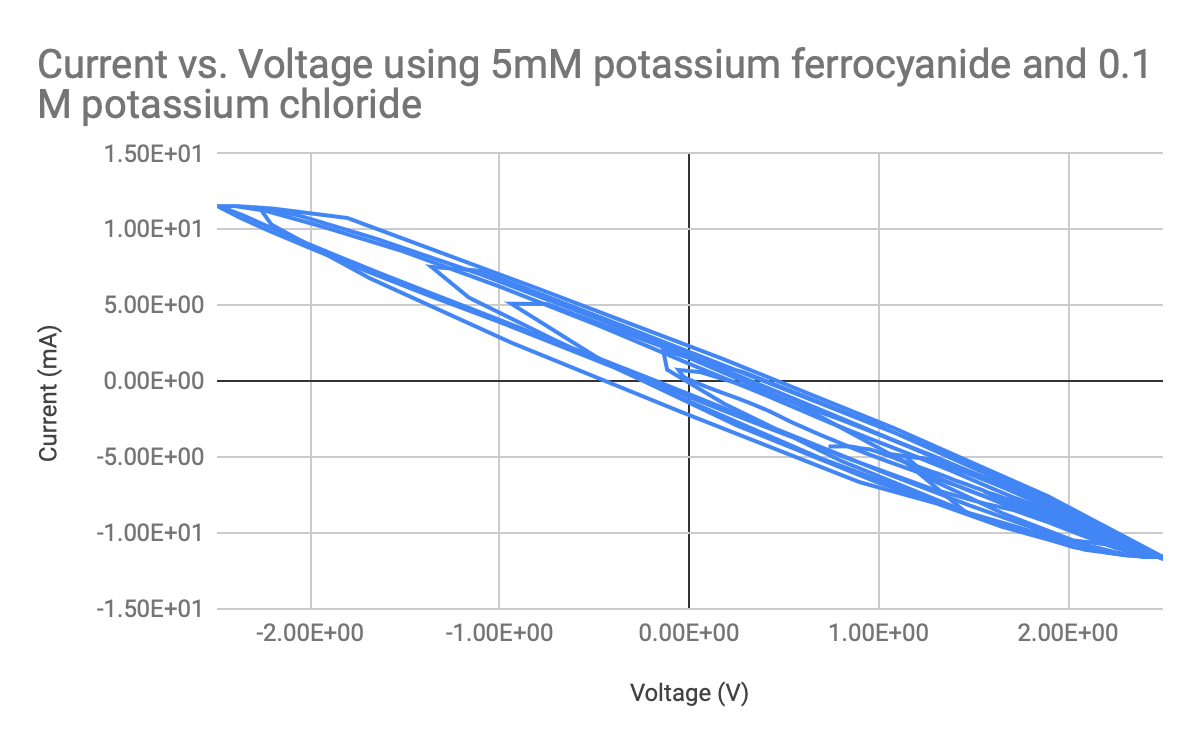 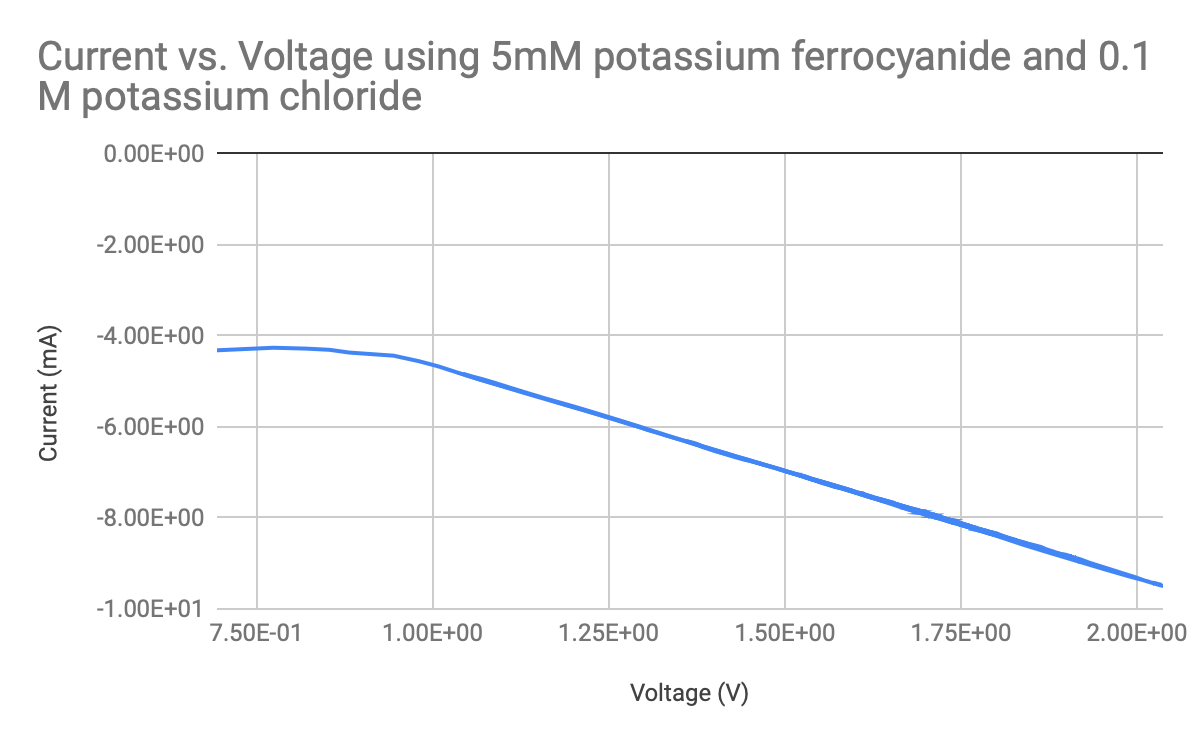 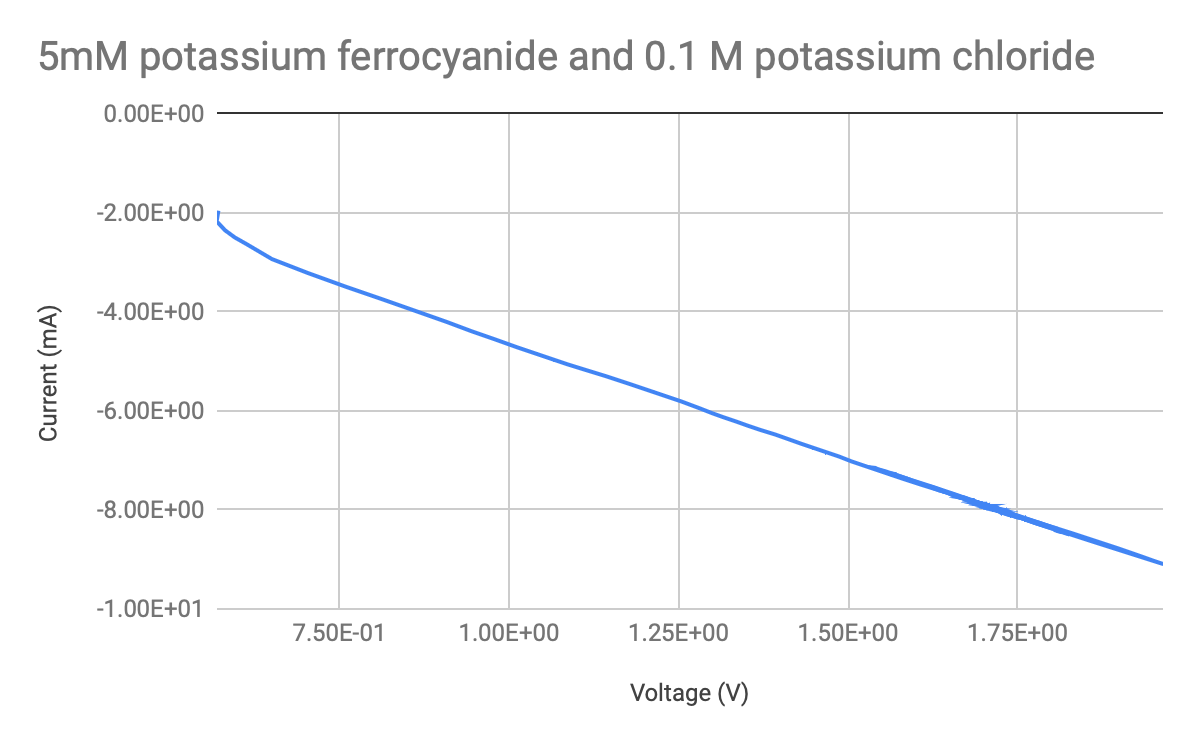