Nattokinase Live Biotherapeutic Products
The basic goal of our project is to produce live biotherapeutic products (LBP) which can release Nattokinase continuously in the gut to prevent deep vein thrombosis (DVT). There are two main designs to achieve it:

Nattokinase Production
To make E. coli  release Nattokinase frequently, we cloned the gene of Nattokinase (aprN ) from Bacillus subtilis  natto HS01. Then, we ligated aprN  with pET-21a(+) to generate a cloning vector, which we can test Nattokinase expression by IPTG induction. The 6xHis-tag on pET-21a(+) attached behind aprN  can help us purify Nattokinase by using the Ni-NTA spin column.

Adhesive protein
Adhesive protein plays a role in the attachment between the small intestine and our bacteria; therefore, it can extend the duration of live biotherapeutic products(LBP) staying in the gut.

In our design, the gene of adhesive protein is composed of ompA , GS linker and fimH . OmpA is a kind of transmembrane protein which is located at the outer membrane. GS linker was designed as a short peptide GGGGS with a flexible 1 degree structure to ensure the two proteins have enough space to function. Most uropathogenic Escherichia coli strains harbor genes encoding adhesive type 1 fimbria (T1F), and fimH  that we used is a part of the genes. FimH consists of two immunoglobulin-like domains: an N-terminal lectin domain that binds mannose ligand and a C-terminal pilin domain that anchors FimH into the fimbrial tip. The two domains equilibrate between associated-state and separated-state accompanied by mannose binding. So, we expect that OmpA will direct FimH to the outer membrane, and FimH lectin domain targets to the high mannose N-glycosylated glycoproteinA on duodenum epithelium. Thus, our E. coli  can successfully attach to the small intestine. What's more, we only cloned a part of fimH  from 22 to 300 aa sequence without signal peptide because fusion of the whole sequence to OmpA may lead to unwanted cleavage. 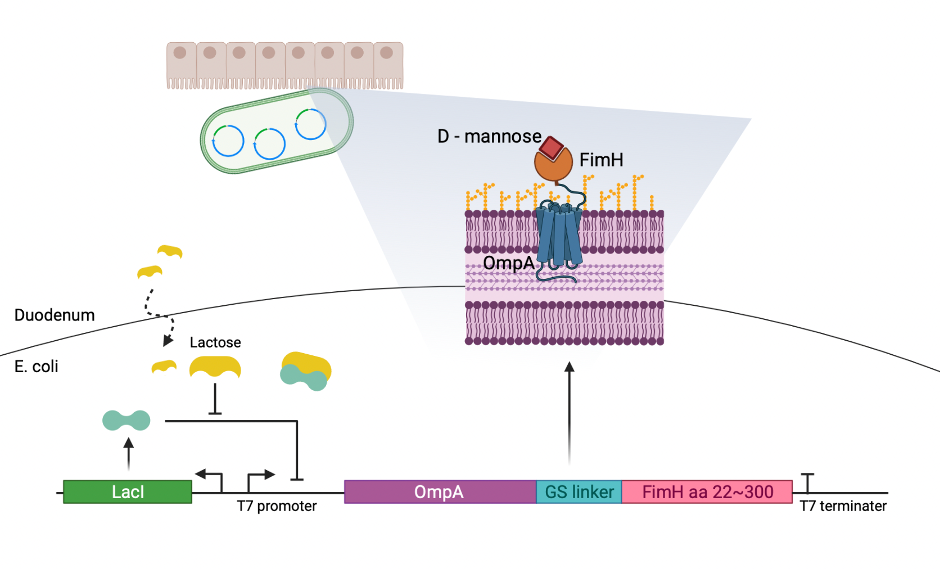 Oral Delivery system
Overview
Commonly, orally consumed probiotics must face obstacles such as low pH of the stomach, bile salts, host immune system, and the competition with pathogenic and commensal microflora before reaching the intestine [5]. Here is an overview of our NATTO IT OUT oral delivery system, which accounts for the main part of our team’s integrated human practice. Originally, we came up with a novel idea of encapsulating our E. coli  Nissle 1917 (EcN) with alginate beads coated with PEGylated chitosan. However, we changed our encapsulation method to simply load our probiotics into HPMC acid resistance capsules. Check out our “Integrated human practice” page for more information.

Our oral delivery system could be summarized as the following: Firstly, after adding our protective medium, we freeze-dried the EcN to ensure long term storage. Next, by loading the lyophilized EcN into acid resistance HPMC capsules, the EcN could be protected from the harsh GI tract environment and delivered into the small intestine.

Freeze-drying(lyophilization)
We lyophilized E. coli  Nissle 1917 with a protective medium (skimmed milk: 10%, sucrose: 10%, trehalose: 5%, antioxidant). Saline medium was done as control. Plate counting method was used to count viable bacteria after different storage conditions. Check out our “Notebook experiments” page for more information. Our goal is to increase the viability of EcN after freezing with our protective medium. Besides, we want to know the viability of freeze-dried EcN under different storage conditions and time.

Capsule design
After lyophilizing our EcN, the next step is to deliver our lyophilized products into the human gut. We aim to put them in empty hard capsules which can protect the bacteria from the low pH environment at the stomach but to be released soonly at the small intestine . We are grateful and honored to be sponsored by the most leading and finest capsule manufacturing company, Dah Feng Capsule (DFC), in Taiwan. We visited their company on September 9th, 2021.
Remote control system
Overview
In our project, we aim to develop a remote control system for our live biotherapeutic product (LBP) that enables us to manipulate the gene expression, NK production in our case, of LBP from the outside of human bodies. There are many candidates for this system, such as optogenetic gene regulation, acoustic gene regulation, and magnetic gene regulation, and, in our case, we decide to choose the optogenetic system as the core of our remote control system.

Choosing Optogenetic Switch
There are lots of optogenetic systems established by different components and regulating gene expression while stimulated by light in different wavelengths. In our case, since we aim to control the gene expression of the LBP from the outside of human bodies, the optical stimulating signal should have the ability to penetrate the tissue and reach the LBP in the intestine. Therefore, the wavelength of the optical signal should be longer, like near-infrared (NIR), in order to have better tissue penetration rate and the optogenetic systems that cooperate with this kind of optical signal will be our first choice. Finally, we decided to use BphP1-QPAS1 optogenetic switch in our project of remote control system.

BphP1-QPAS1 Optogenetic System
BphP1-QPAS1 system is a NIR light-induced system. It is engineered from the BphP1-PpSR2 optogenetic system from Rhodopseudomonas palustris.

BphP1-PpSR2 optogenetic switch is a natural PPI-based optogenetic system. BphP1, serving as the light sensor in this optogenetic system, undergoes NIR light-triggered configuration transformation while is stimulated by 740-780nm light, resulting in Pfr-state-to-Pr-state photoconvertion and binding to PpSR2. PpSR2 is the natural protein partner of BphP1 and is a gene expression regulator, especially for photosynthetic genes in Rhodopseudomonas palustris, containing DNA binding regions and inhibiting the gene expression by binding to the upstream of the gene. Under 740-780nm light, BphP1 in Pr state will reversibly bind to PpSR2 and eliminate the inhibition of gene expression originated from PpSR2.

Q-APS1, a truncated variant of PpSR2, was proved to have better efficiency in the optogenetic interaction with BphP1 [4], because of the elimination of non-essential domain of PPSR2 that may participate in other PPI and result in lower efficiency of PPI with BphP1, and also maintains the ability to interact with DNA sequence, furthermore inhibiting the gene expression. 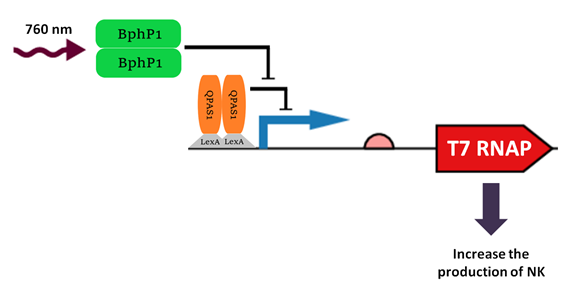 Establishing Light Control System
Resource
Our source of BphP1, QPAS1, and mCherry gene is from plasmid pKA-207I10 that we ordered from Addgene. And our source of LexA gene is cloned from the genomic DNA of E. coli  MG1655.

Expression of BphP1 and QPAS1
To establish the light control system, we have to establish the production of each protein we need and make sure that all of the proteins expressed from the genes we got are in good condition, with proper function. First of all, we use pET-21a (NheI / HindIII) as the vector of BphP1 and Q-PAS1 expression plasmid. In this case, both BphP1 and Q-PAS1 will get 6xHis tag on their C-terminal respectively, enabling us to extract them by Ni-NTA column.

Establishing BV pool in engineered bacteria
Biliverdin IXα (BV) tetrapyrrole is the main chemical group in BphP1 that absorbs NIR light energy. So, proper production of BV and maintaining BV pool for the use of BphP1 biosynthesis is important for the optogenetic system. In order to deal with this, we decided to introduce the igem part BBa_I15008, heme oxygenase (ho1) from Synechocystis, to our design for the purpose of BV biosynthesis. Thus, we have to express BphP1 only when HO1 is also being expressed.

In our design, in order to maintain a constant NK pool, NK gene will not only express by pLexA, which can be regulated by BphP1-LexA_QPAS1 system, but also express by a tandem constitutive promoter, establishing the baseline of the NK concentration. And, for people in different situations and have different needs, they can use the NIR signal to induce the production of NK to the pool size they want or are suggested.

Kill Switch
Overview
With respect to biosafety issues, we designed a kill switch system operating in engineered bacteria. Our design aims to use the least biobricks to achieve biosafety goals in both vivo and the environment. In our design, MazE-MazF toxin-antitoxin with TetR gene, TetR repressible promoter, pBad promoter and RNA thermometer are used to control the bacteria’s survival. By constructing our design, we can switch on the killing system through temperature and chemical inducement.

Our Goal
Our project is about live biotherapeutic products (LBP), so not only the biosafety in the environment but also that in the human body should be put into consideration. Firstly, we need to find a stable system that can act as the “kill switch”. We’ve referred to the 2020 Fudan iGEM team [1] which collected many kill switch systems and compared the pros and cons. We learn that using a toxin protein to kill bacteria is an efficient method. Yet, the leakage of toxin may lead to unwanted cell dying, so an antitoxin protein accompanying this killing system is critical. Finally we chose the MazE/MazF toxin/antitoxin system to serve as the main concept of our kill switch system. Secondly, we need to choose proper promoters and RBS to manipulate the transcription and translation of MazE and MazF genes. In general, the level of MazE protein is higher than MazF; however, when we want the bacteria to be removed, the level of MazF will surpass that of MazE.

Our Design
In the past, when iGEMers constructed biosafety designs which function in vivo and the environment, most of them used two independent systems. However, this may increase the burden of E. coli  expressing vector genes by constructing two independent systems in one plasmid. Besides, for every iGEM team project, there are still other parts that needed to be constructed in the plasmid, so we believe that developing an integrated biosafety construction with multiple functions but simple is important. To achieve our biosafety goals, we’ve come up with two designs. The first includes three constructs, and the other includes only two.
Design 1

In our design 1, we use TetR, MazE and MazF genes to achieve biosafety both in vivo and the environment. To keep our bacteria alive in normal situations, the antitoxin MazE is expressed continuously at a relatively high level. On the other hand, the toxin MazF is also expressed continuously but at a relatively low level. However, there are two situations when the balance between MazE and MazF will break.

The first situation is when the temperature falls from 37°C to 23°C. The RBS on the upstream of MazE will fold and the translation of MazE will be terminated. The bacteria will die consequently without MazE which is an antitoxin for itself. By this design, our engineered E. coli  Nissle 1917 won’t be alive in the environment because of the temperature decline after the bacteria was excluded from our human body.

The other situation is when people take a dose of L-arabinose. Gene TetR will express, which leads to the repression of promoter TetR and the transcription of MazE will then be terminated. The bacteria will die consequently without the antitoxin: MazE. With this design, people just need to take the L-arabinose when they want to remove the bacteria inside the body through in vivo regulation.
Design 2

In Design 2, we removed gene TetR and promoter pTetR and replaced them with a tandem promoter (a pBad with a constitutive promoter). In this design, MazE and MazF are still expressed continuously. With a tandem promoter constructed on the upstream of MazF, MazF can express at a basic level in normal. Besides, the expression can be enhanced by taking the L-arabinose.[3] Interestingly, this design only includes two constructs but can still accomplish our biosafety goals both in vivo and the environment.

Similar to Design 1, when the temperature falls from 37°C to 25°C, the thermometer RBS on the upstream of MazE will fold, which terminates the translation of MazE. Additionally, when people take a dose of L-arabinose, the pBad will be active and the transcription rate of MazF in the downstream of the promoter will enhance. The level of MazF will then surpass that of MazE and the bacteria will die.
References
[1] 2020 Fudan iGEM team, https://2020.igem.org/Team:Fudan/Design/kill_switch