We envision our project to be an end-to-end solution for farmers. To achieve this goal, we decided to create a GMO yeast chassis that would be optogenetically controlled to either induce Human Beta Defensin 2 expression or initiate flocculation, depending on the wavelength of light the yeast is exposed to.

Additionally, we have created an optogenetic cell-machine interface system via a 'smart' bioreactor, which will interface with the yeast culture to determine when to initiate the different phases of the production process. Our bioreactor is open-source and manufactured using 3D printed parts to lower the overall cost and make it accessible to farmers. Furthermore, to ensure biosafety, we plan to introduce a AND gated kill switch system to ensure biocontainment. 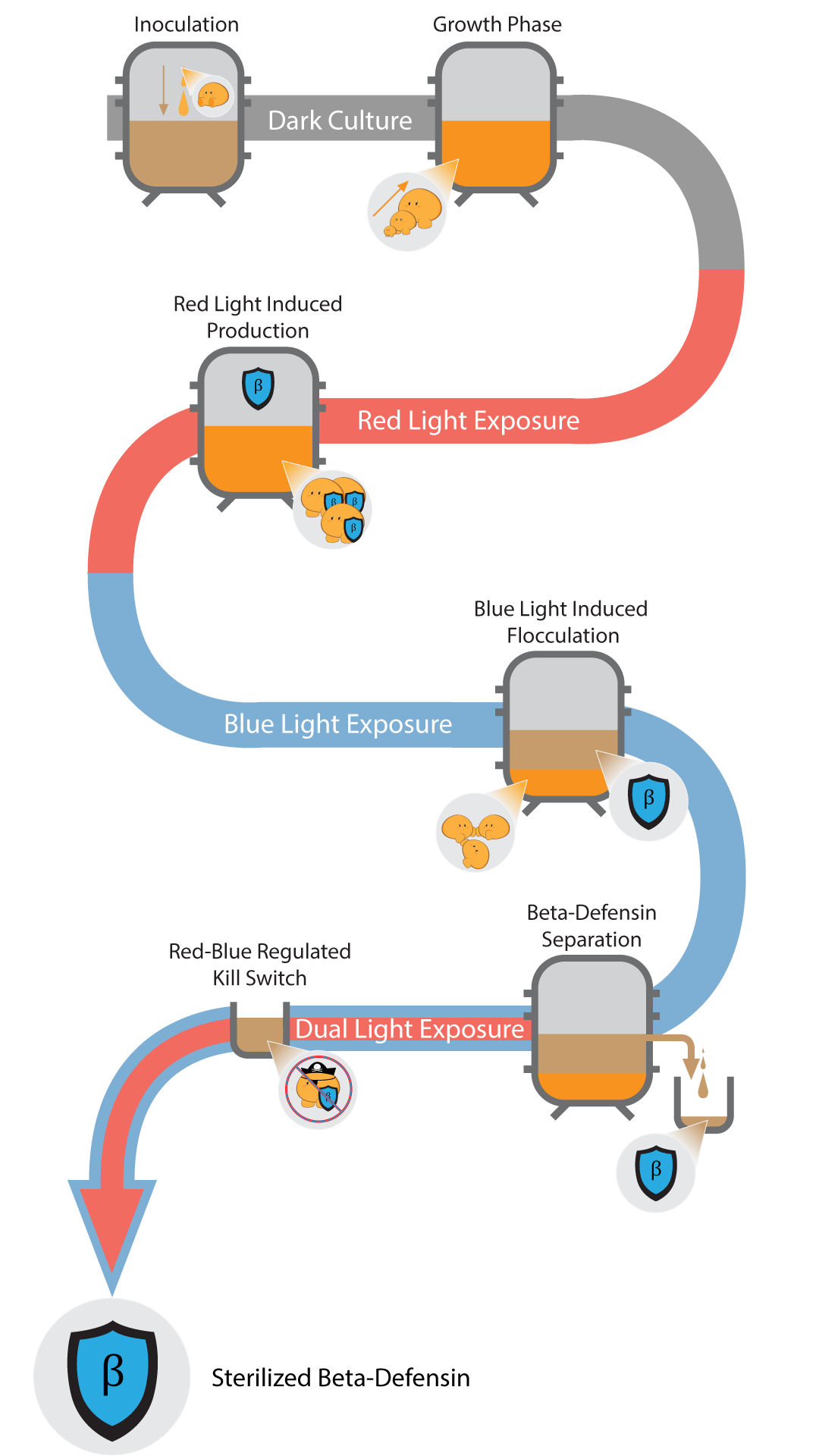 Our implementation of the blue and red light dual channel system relies on three synthetic promoters that we developed ourselves, and one promoter developed in the PhiReX system. 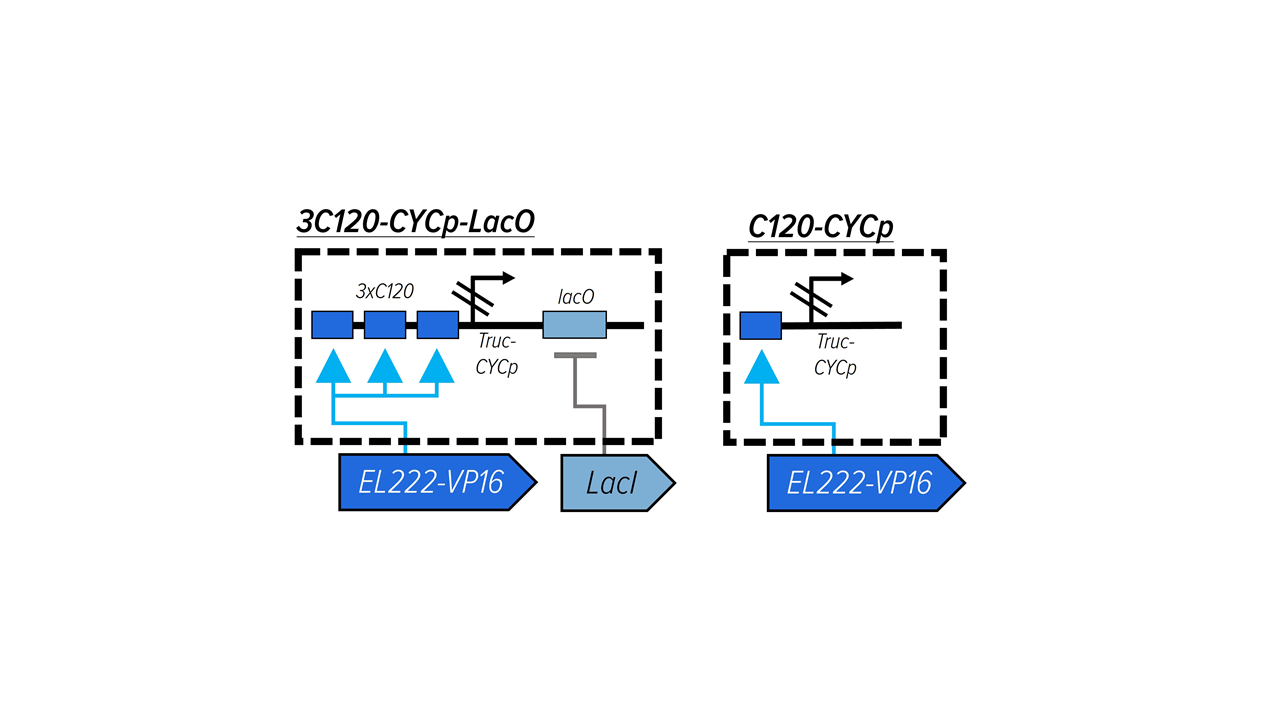 The blue light promoter 3C120-CYCp-LacO consists of a truncated CYC1 promoter, preceeded by three C120 repeats (the binding sites for EL222), and followed by a downstream lacO sequence. This construct allows active EL222 dimers to activate the promoter, whereas the production of LacI proteins will inhibit the promoter. 3C120-CYCp is a variant of this promoter without the LacO sequence. 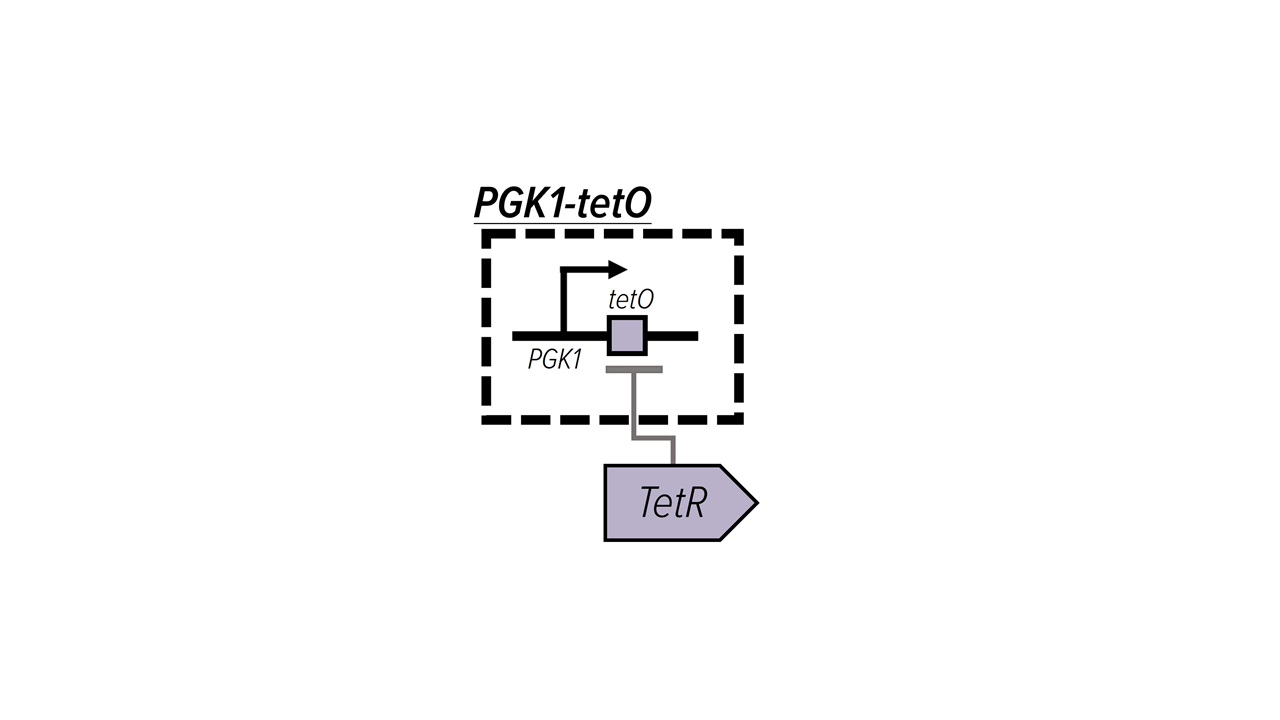 The tet-repressible promoter PGK1-tetO is a promoter derived from PGK1 promoters native to yeast, fused with a tetO sequence downstream of its TATA box. If TetR is produced, the promoter is repressed, otherwise it will be transcriptionally active. 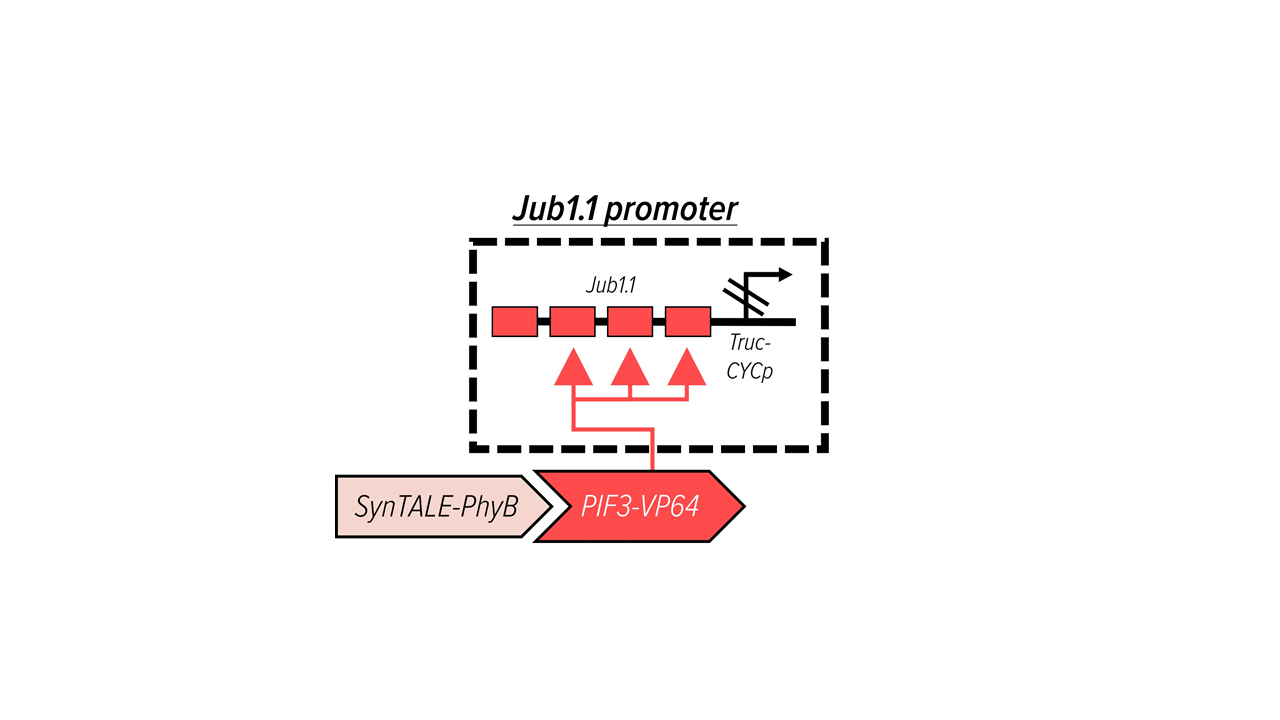 The Jub1.1 promoter was developed by Dr Lena at Potsdam University, and contains 4 Jub1.1 sequences which are binding targets for the SynTALE protein, and thus bring the VP64 activation domains fused to PIF3 in close proximity to the truncated CYC1 promoter when SynTALE-PhyB and PIF3-VP64 are exposed to light. 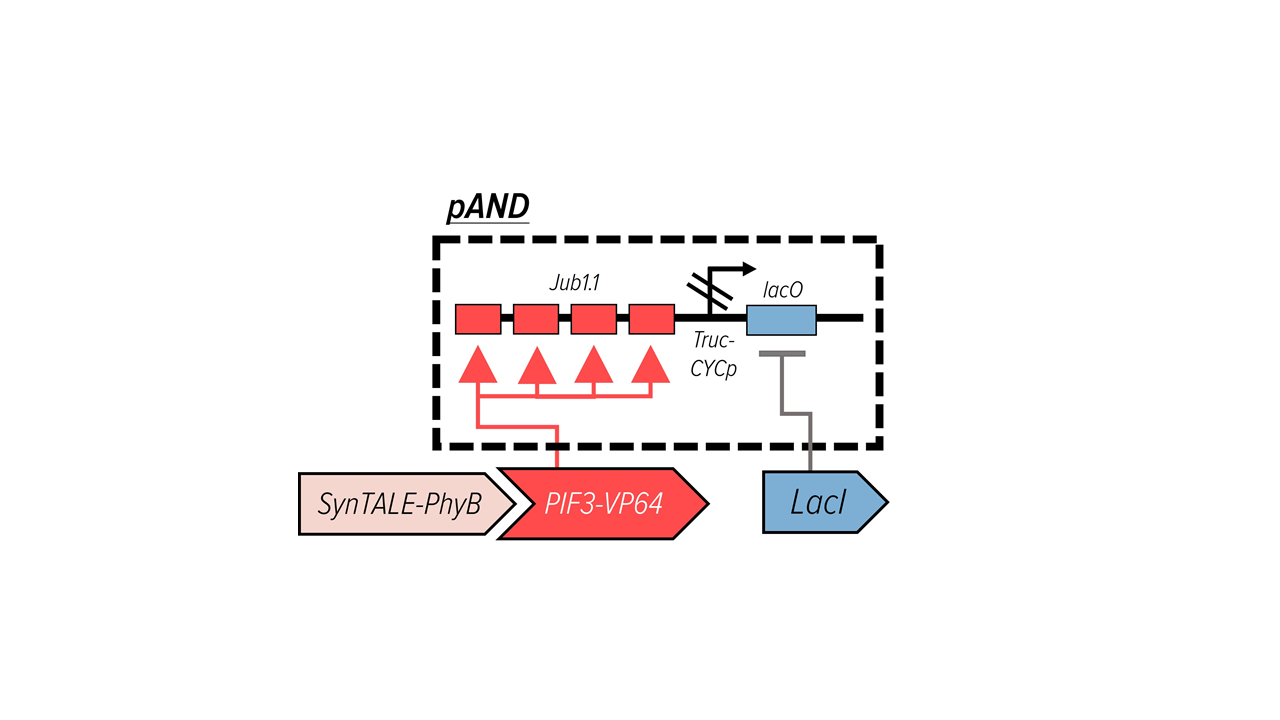 pAND was developed by fusing the Jub1.1 sequences from the PhiReX system to a truncated CYC1 promoter, with a downstream lacO sequence such that it is activated in red light the same way the Jub1.1 promoter is. However, if LacI is being produced, the activity of the promoter remains suppressed.

We utilized a dual activation-derepression circuit for a tighter induction fold on our circuit. EL222-VP16 is constitutively produced by ACTp. However, in darkness, EL222 is inactive, and LacI expressed from PGK1-TetO promoter will repress the leakiness of 3C120-CYCp-LacO.

To drive up the overall expression of blue light promoters, we also implemented a feed forward circuit, where activation of EL222 would lead to an increased expression of EL222. This positive feedback diverts the metabolic flux of the yeast towards 3C120-CYCp motifs when blue light is present, which also complements the above dual repression system. 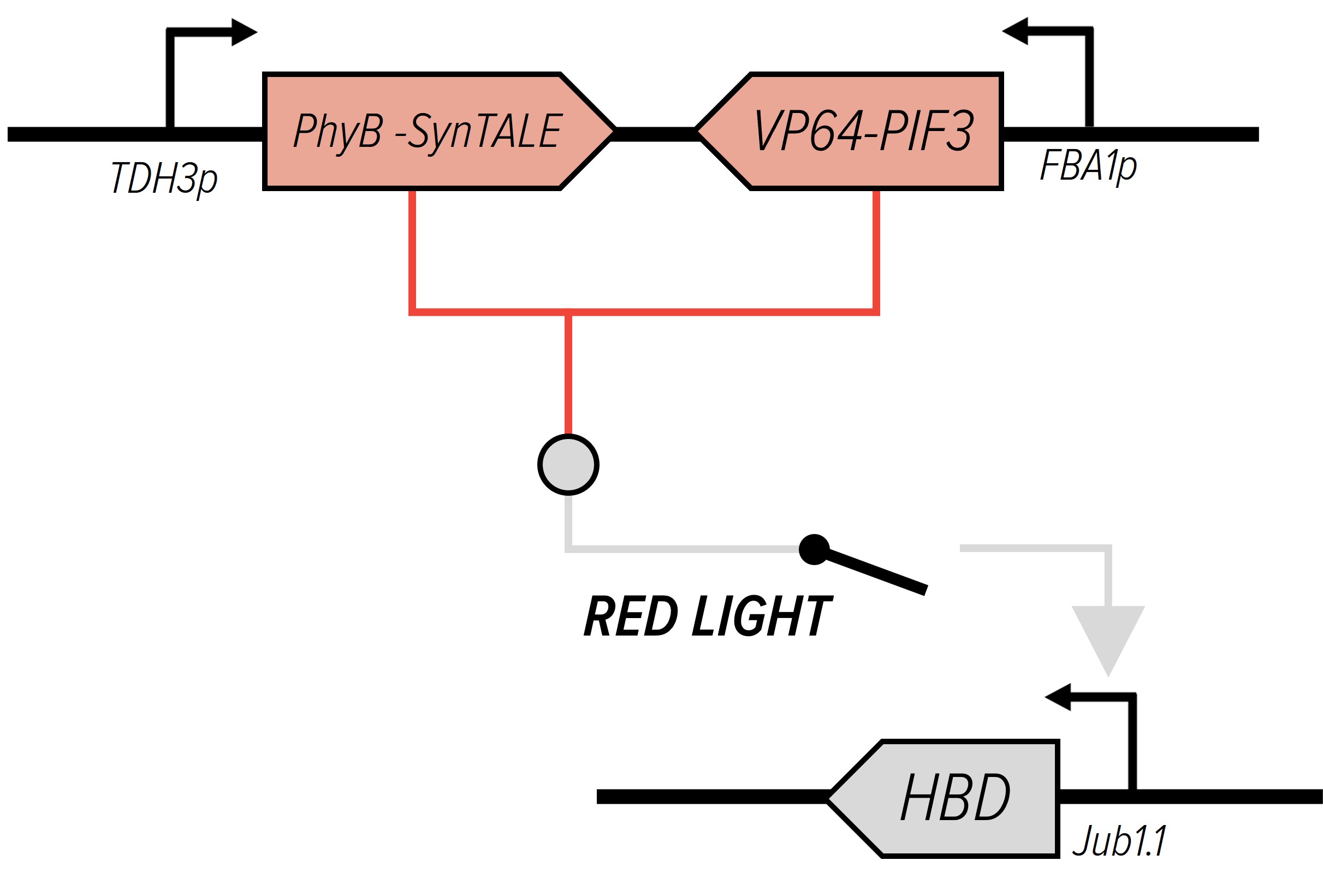 The red light system depends on a split protein framework, where the PhyB-SynTALE and PIF3-VP64 interact in red light to bring the VP64 in close proximity with the Jub1.1 promoter. However, this interaction is facilitated by the chromophore phytochromobilin, which is not synthesized in yeast, hence expression of the split proteins is insufficient to complete the red light system.

An additional two genes must be expressed, as demonstrated by the authors of the PhiReX papers, in order to synthesize phytochromobilin in vivo. A heterologous heme oxidase(HY1) from A. thaniliana and a bilin reductase(PcyA) from Synechocystis sp. With the chromophore synthesized, the system is now able to fully activate Jub1.1 in the presence of red light.

The kill switch was linked to the pAND promoter, such that it could only be activated when both blue and red light were present.

In the presence of blue light, the lacO sequence in pAND would be de-repressed, but there would be no activation to drive transcription.

In the presence of red light, the Jub1.1 sequences in pAND are activated, but transcription is still inhibited by LacI.

Only when both blue and red light are present, is LacO de-repressed and pAND activated, driving the expression of the nuclease kill switch