Our objectives in developing the Heterologous Expression bioReactor system with Optogenetic control (HERO) focused around several considerations such as cost, automation, as well as ease of use. In order to achieve these objectives, we have identified several key areas for implementation in our bioreactor that would assist in the day-to-day operation of our device. These areas were selected with a user-agnostic approach in mind, as we recognize that the inner workings of such a device along with the bioproduction process contained within may be relatively opaque and arcane to the end-user - farm workers. 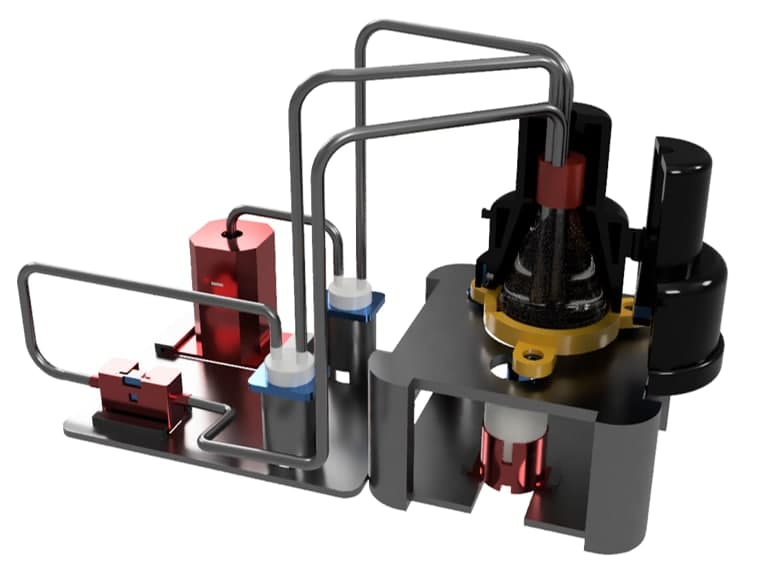 HERO is split into two main modules: the main bioreactor module that takes care of temperature regulation and orbital shaking as well as a satellite module that hosts the pumps, OD measurement system as well as the product collector and sterilization chamber. 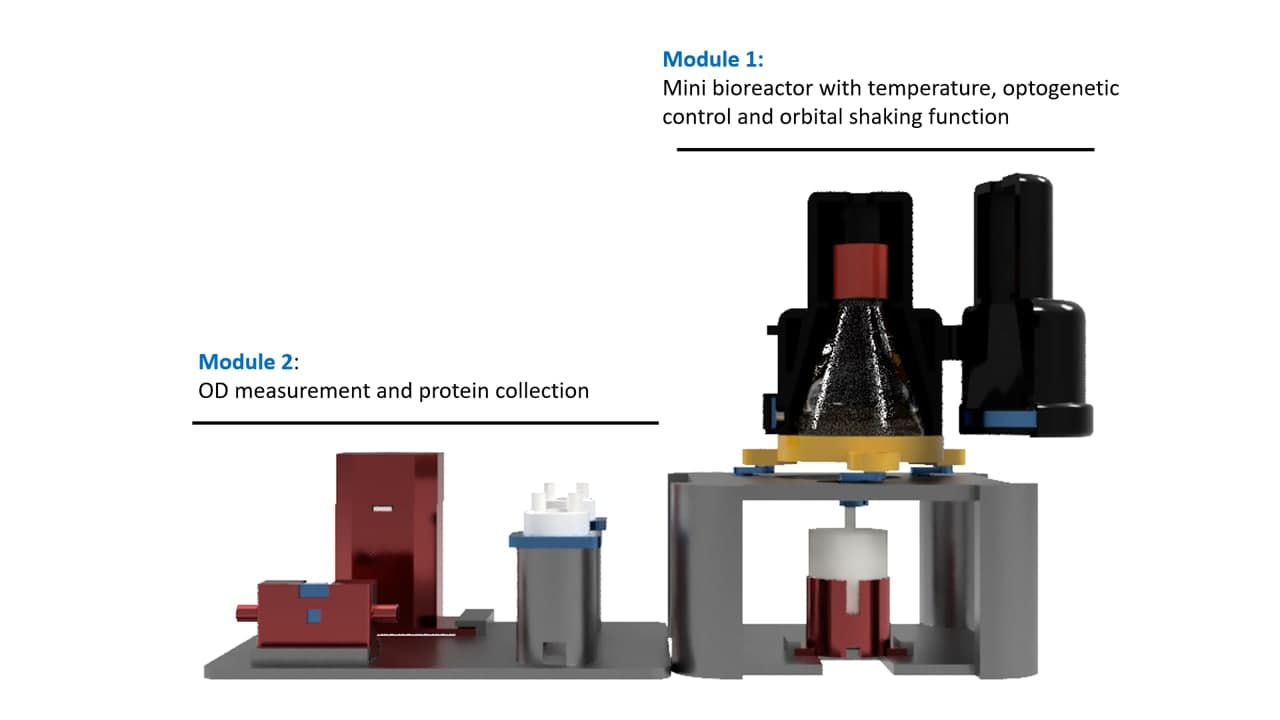 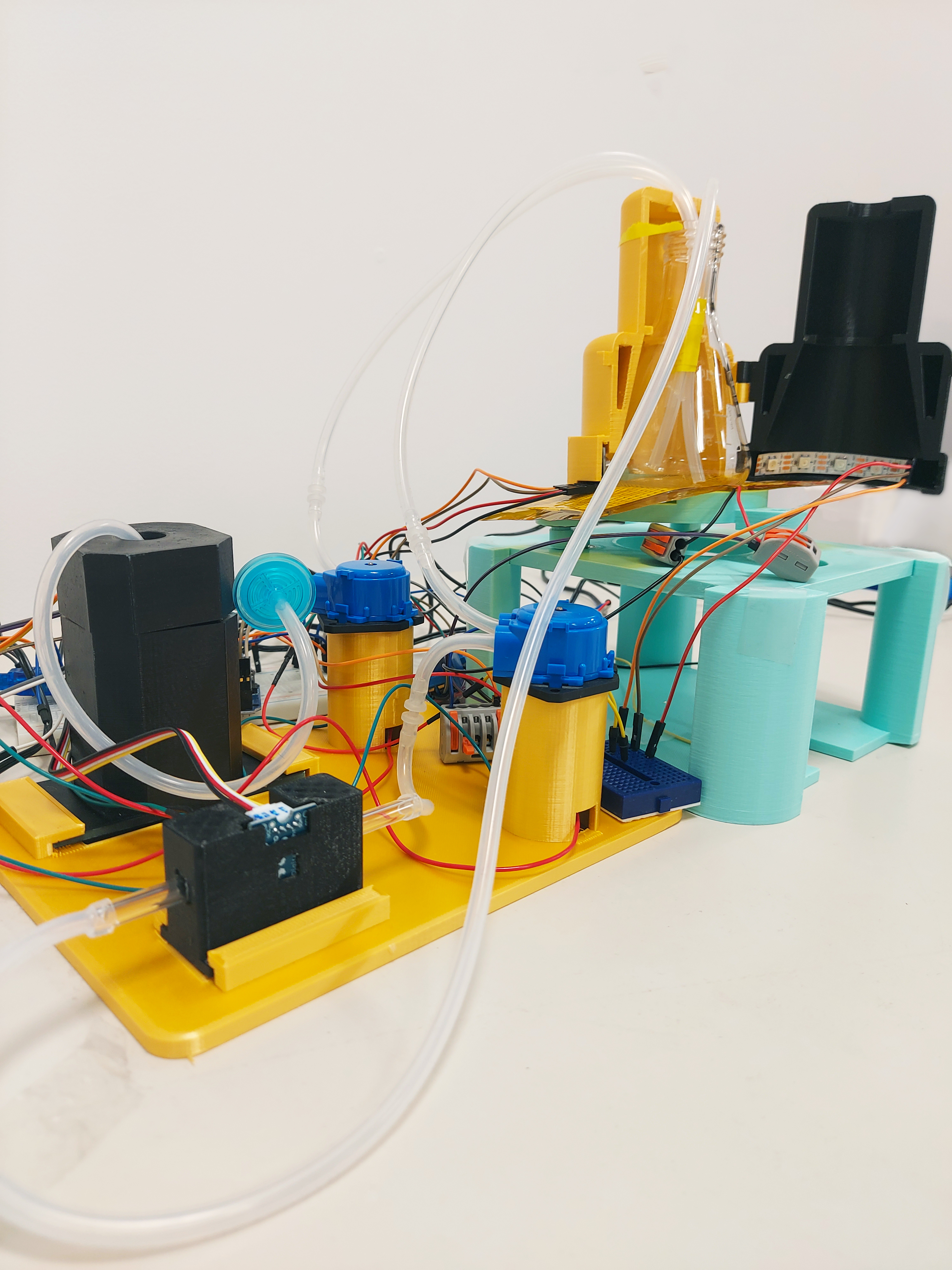 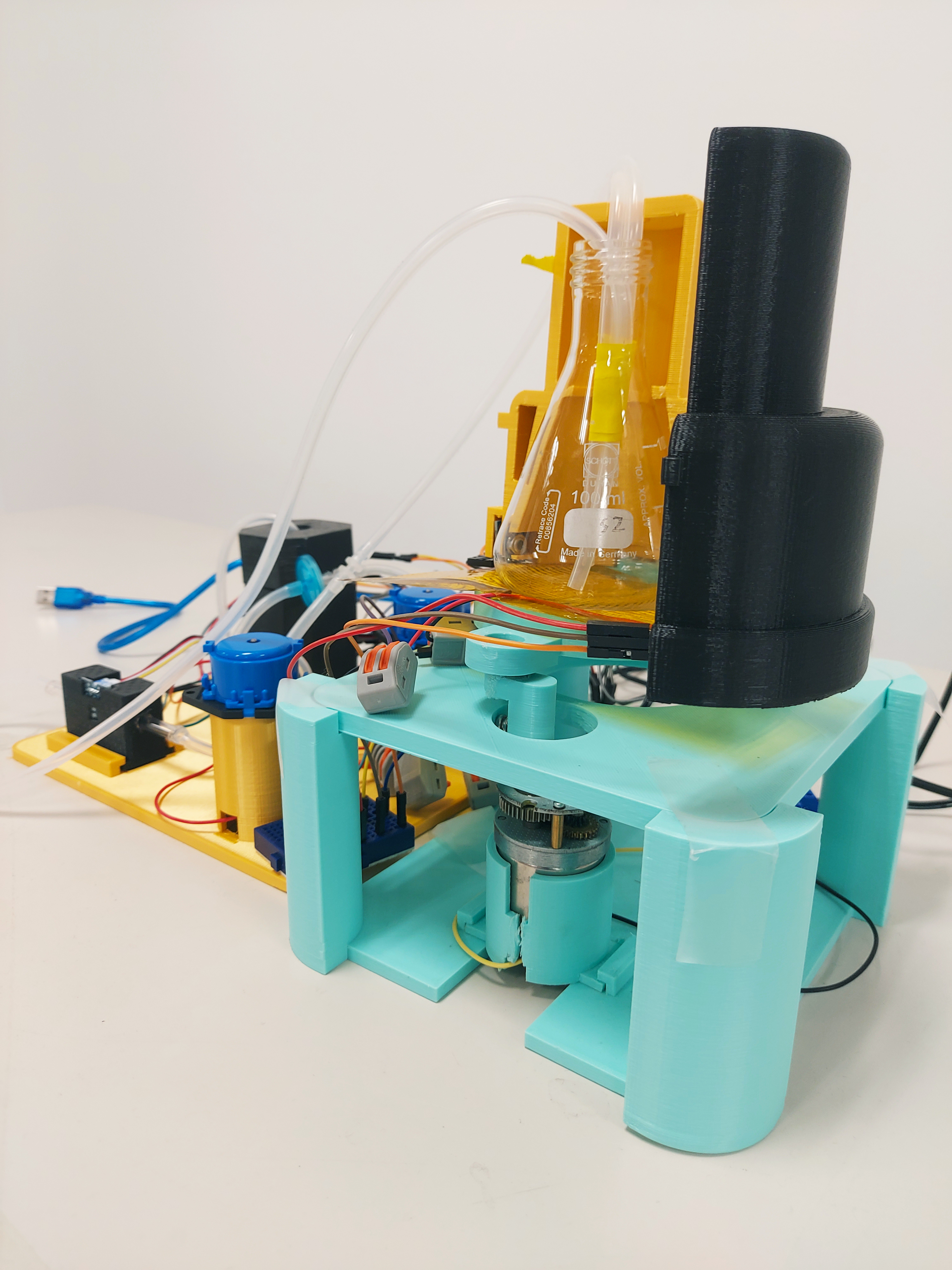 Our device is also designed to be significantly more user-friendly than the average industrial bioreactor, which has manually controllable parameters for optimal culture conditions. HERO takes on a more “black-box” approach, with the finer details of the culture conditions being regulated automatically by the bioreactor program. This would greatly lower the skill floor required to operate our bioreactor, allowing individuals with no prior experience in bioproduction to be able to operate the bioreactor comfortably.

Our program flow is relatively simple - the bioreactor takes measurement cues from the culture and adjusts the overall process phase accordingly. For example - the production phase is initiated when the OD of the culture does not change significantly over 2 consecutive readings, signalling that the culture has reached its first stationary phase. 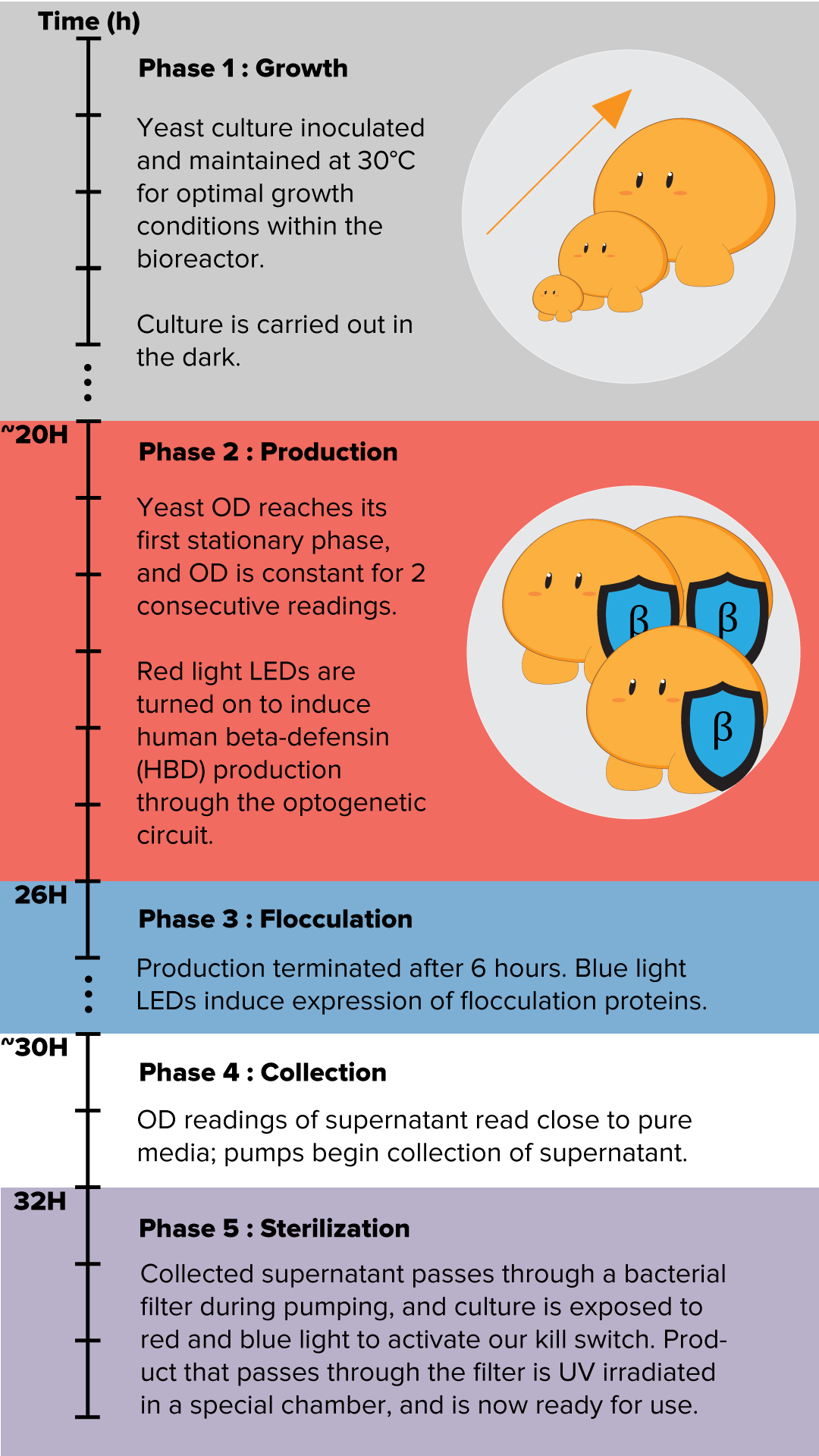 The Arduino Uno is programmed to regulate the bioreactor agitation rate depending on the phase of production currently happening in the culture vessel; each phase of production has a preset agitation rate to suit the process occurring in the vessel. Temperature regulation in the vessel is also held constant through an automated temperature detection and heating system which is triggered when the temperature of the liquid phase culture deviates from a set tolerance from the literature-specified optimal culture temperature.

The IR temperature sensor regulates the heating action of the heat pad at the base of the vessel, controlling the temperature in a narrow band around 30°C. The calibration test showed that the desired temperature can be obtained after 20 minutes of heating from room temperature. 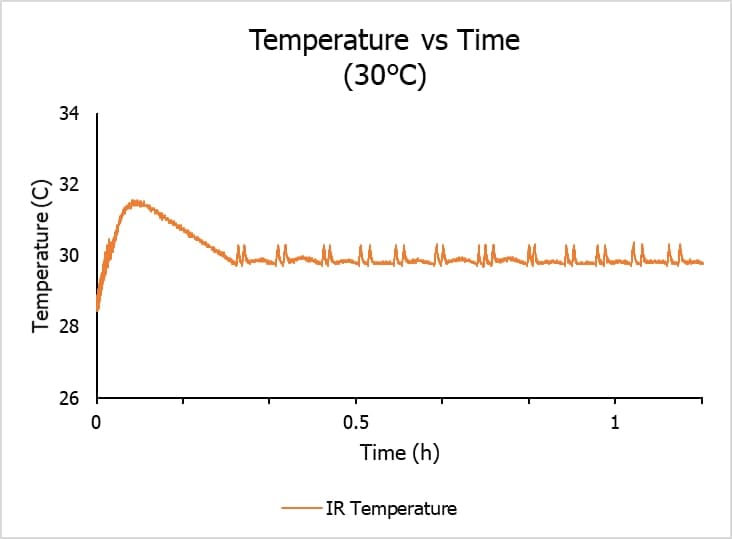 The sleeve also houses the LED array that is used as our optogenetic induction mechanism, with the LEDs incorporated capable of emitting red, green and blue light. Air chambers have been incorporated in the design to limit the extent of conductive heat loss through the sleeve, resulting in a more efficiently insulated culture that is more responsive to temperature regulation. Images and animations below show the process of assembling the shaker unit, the assembled unit, as well as the normal operation of the orbital shaker. 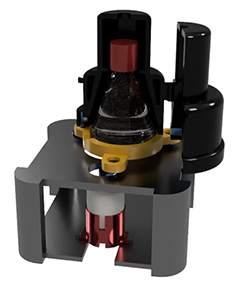 Optical Density (OD) measurements are also taken at regular intervals from the start of the culture process, in order to automatically assess the culture growth within the bioreactor and adjust or delay the durations and conditions for each phase of the culture. This allows for a successful culture with minimal input from the end-user, increasing the accessibility of our product and solution to individuals with no bioproduction experience. The OD measurement unit setup is shown below.

To calibrate our OD measurement, the overnight yeast culture in YNB media was diluted into multiple densities. The reference OD was obtained from NanoDrop™ One/OneC Microvolume UV-Vis Spectrophotometer. Raw readings from the OD measurement unit were obtained 10 seconds after the peristaltic pump had been turned on. This was to eliminate the interference due to the fluid dynamics, as it takes a few seconds for the fluid to fully develop. The test result showed a good linear relation between OD and device raw reading. 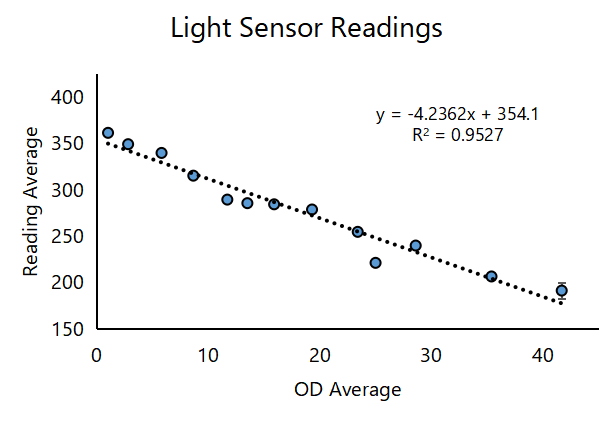 HERO also allows for automated extraction and sterilization of the product to complete the loop - this fire up and forget process only requires the end-user to be present to introduce the raw feedstock to the culture vessel and finally during harvesting of the final product, allowing users to go about their day with minimal disruption.

To demonstrate the working of HERO, we culture the blue-light-induced flocculant yeast strain (C120-CYCp-Flo1) with our bioreactor. The supernatant OD was monitored hourly for 3 hours using our OD measurement unit and the NanoDrop™ One/OneC Microvolume UV-Vis Spectrophotometer for comparison.

Overall, the OD values from the two devices showed good agreement, and the trend of supernatant OD agreed with the results obtained by the Wet lab team. Small flocs were also observed after 3 hours, demonstrating the applicability of the bioreactor for yeast culture and flocculation induction. 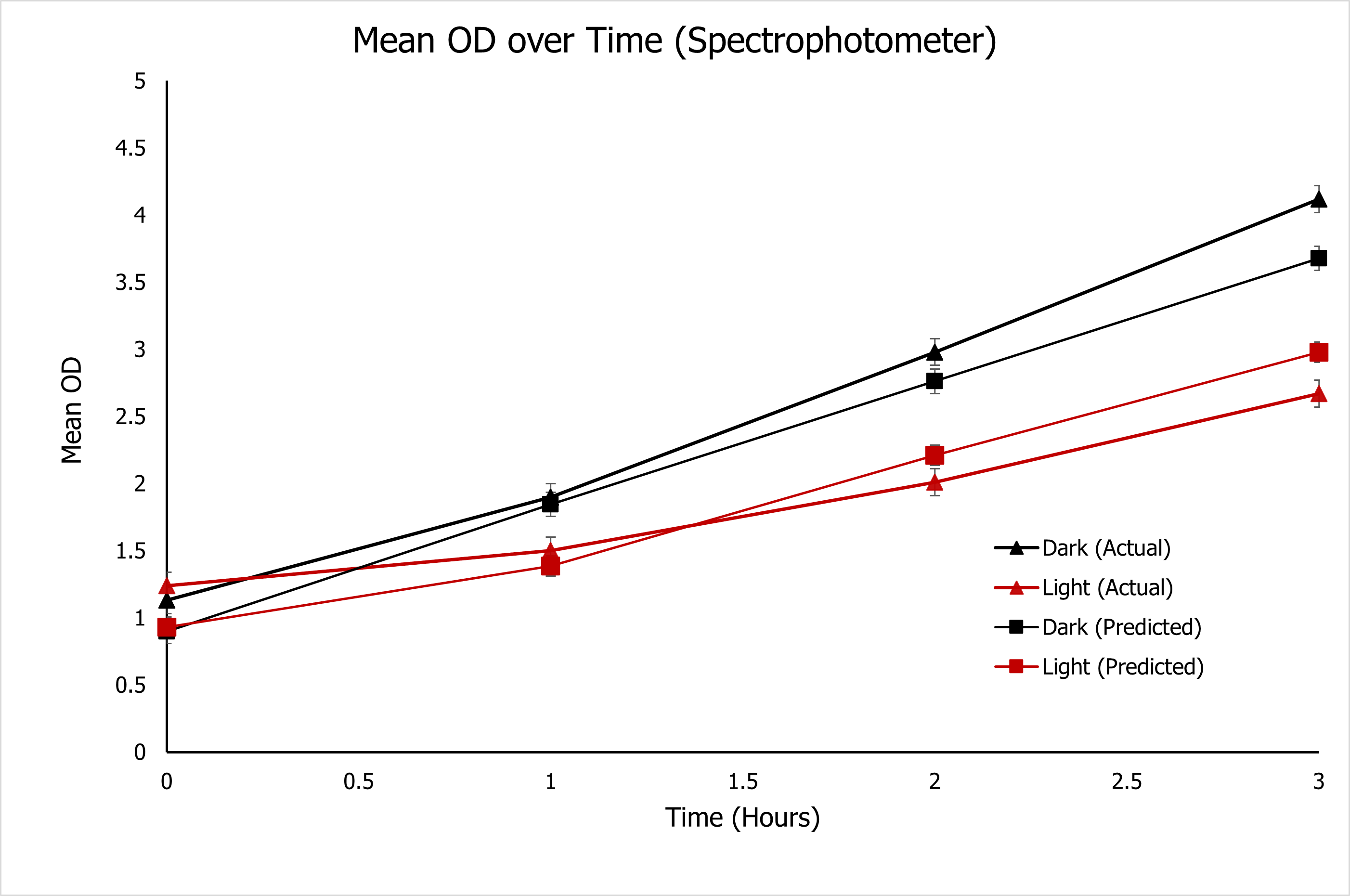 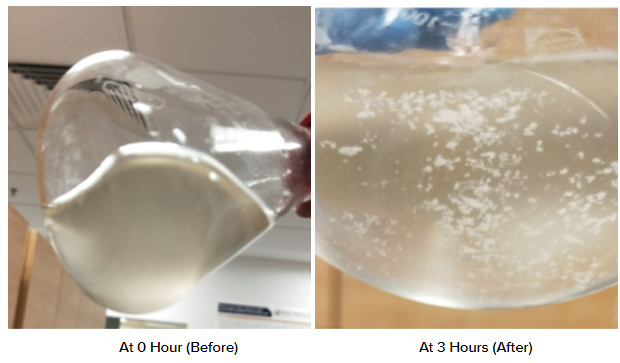 HERO was designed with a relatively simple wiring and setup process involving mostly off-the-shelf components, and the wiring is naturally less involved compared to the more complex systems incorporated in commercial bioreactors. All 3D printed parts can be downloaded from the open-source Thingiverse repository: Link

The wiring diagram is included below. In general, two peristaltic pumps are used, one for withdrawing culture sample for OD measurement, another for supernatant collection after flocculation. The whole system is powered by a 12V adaptor and controlled by 2 H-bridge modules, one relay module and one Arduino UNO. 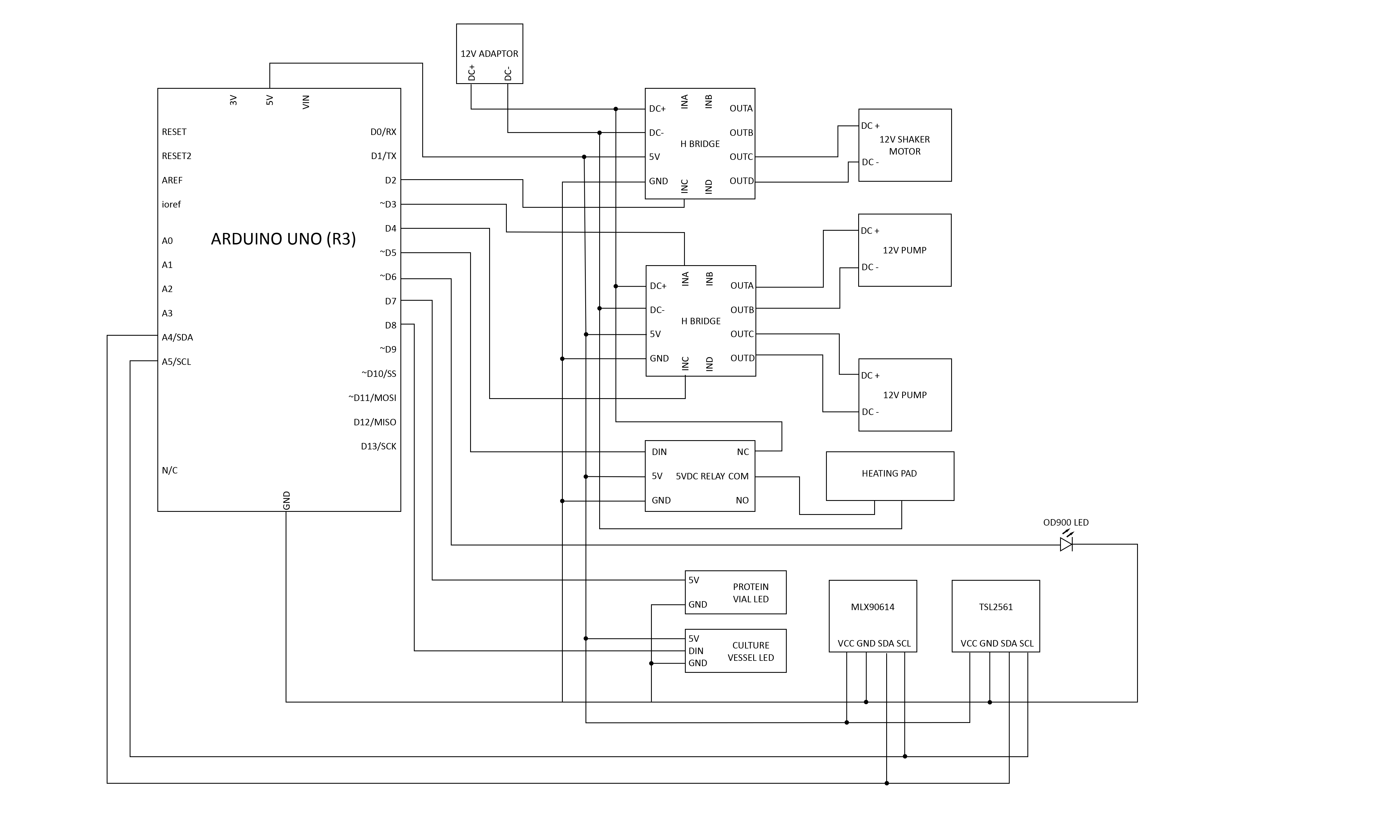 The bioreactor system currently has a large amount of wiring that might be daunting to inexperienced users, and this large amount of loose wiring may also compromise the electrical stability of the system as a whole. To address this, our team has developed a printed circuit board (PCB) based on the connections shown in the wiring diagram above to improve the stability of the system as a whole.

To improve the portability and reduce the desktop footprint of the bioreactor, we have developed this model in the form of an Arduino shield; which will reduce the space taken up by the electronics to slightly over the size of an Arduino Uno unit. Our design is included in the images below. The PCB will be manufactured in due course. 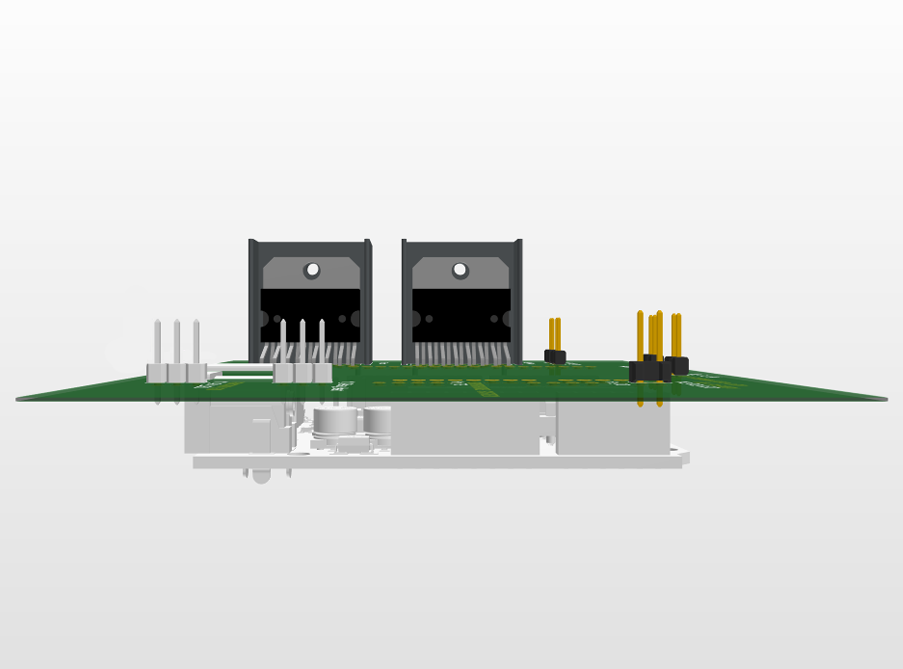 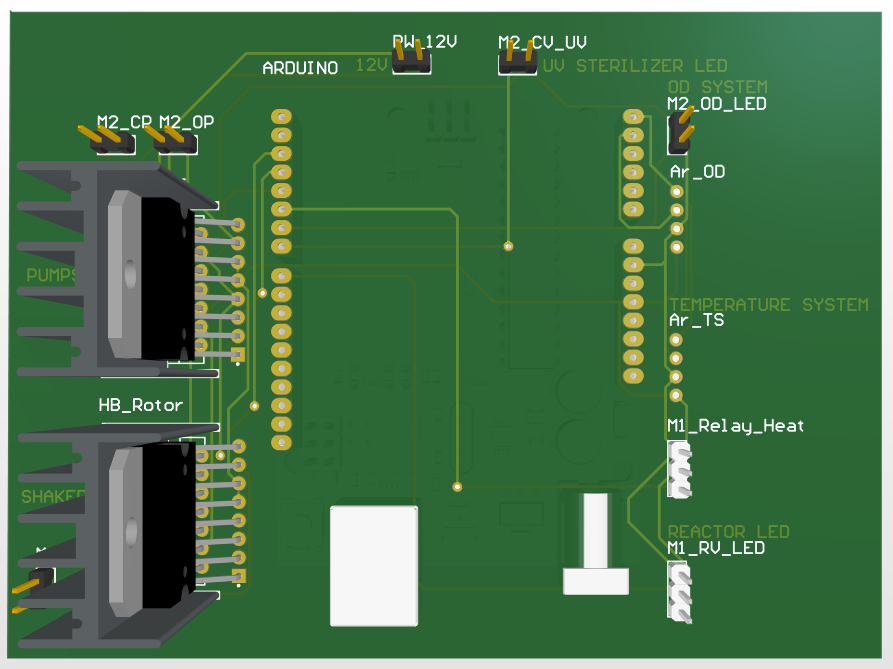 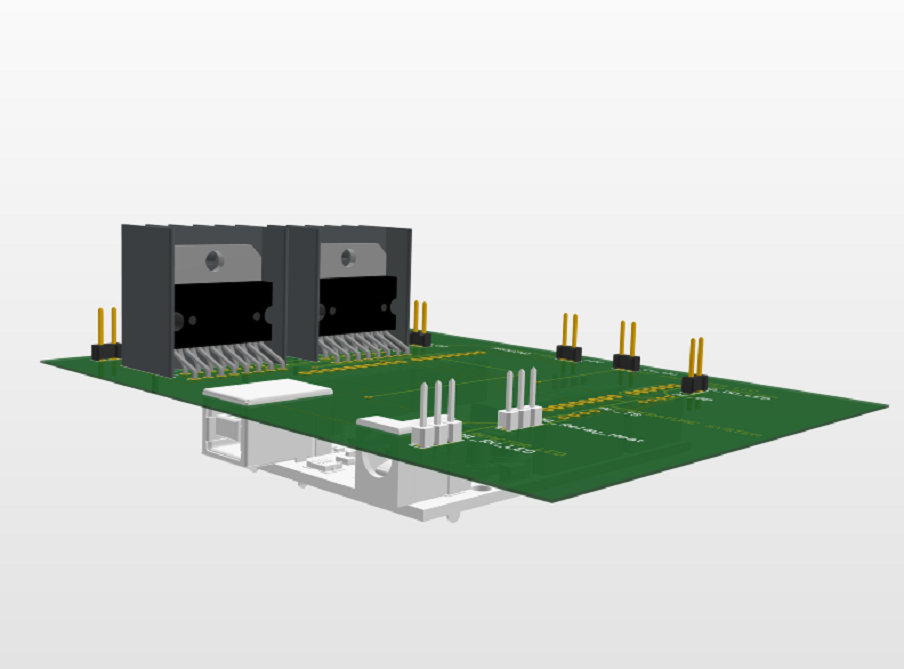 The team also designed and developed flask-holder adaptors for the 50ml flasks with optogenetic induction support. The devices were developed to address the need for light devices to test our gene circuits in the incubator. Due to the relatively small size of our flasks (50ml) the holders for these flasks were too small to allow for LEDs to be held in place around the flasks while the next larger size for the flask holders (100ml) were too large to securely hold the flasks in place.
These devices were simple donut-shaped 3D printed structures that allowed for the 50ml flasks to be secured in the incubator holder for a 100ml (or larger) flask. The images below show the devices at work in the incubator, as well as a cutaway cross-section of the 3D CAD model for the devices. 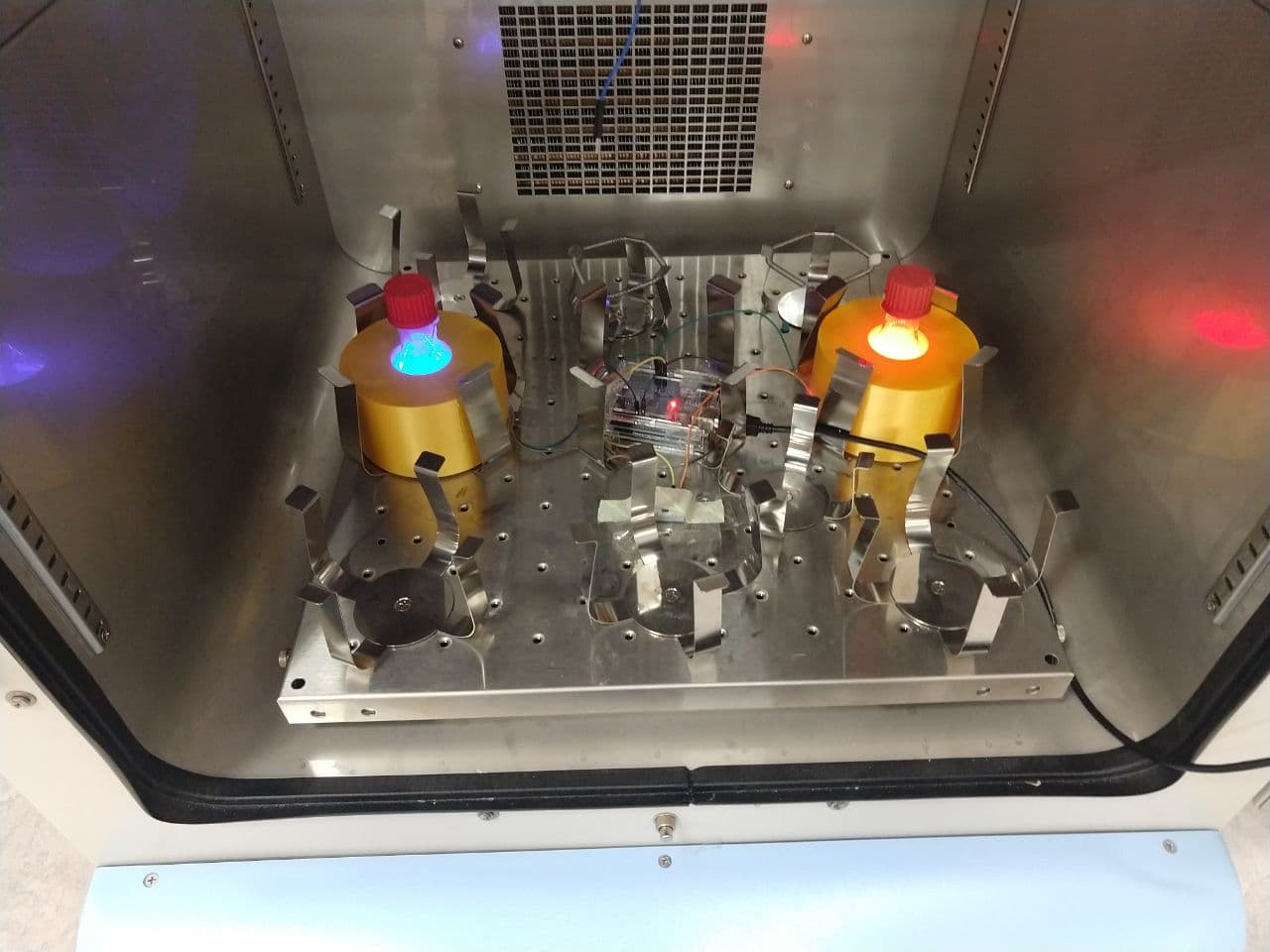 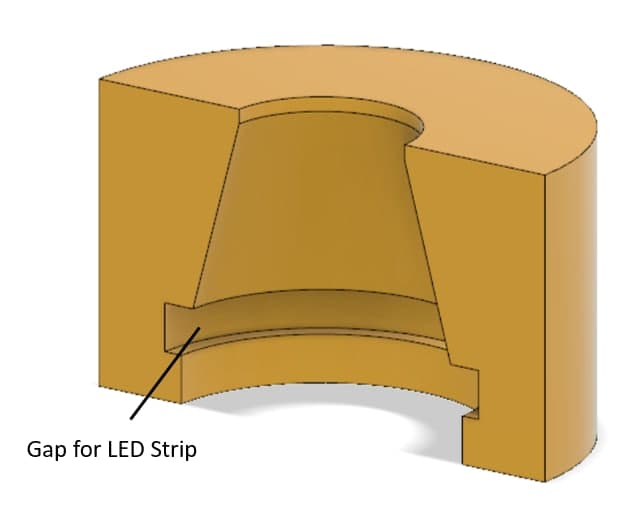