Synterception ensures thorough biocontainment by not only layering three lines of defense for horizontal gene transfer, but also by introducing mutualistic properties that overlap each layer. There are three respective outcomes from each layer: cell death, dissolved plasmid, or silenced expression of a foreign construct. As seen above, mutualistic interactions between each layer suggest optimization of the biocontainment system. Similar to the Baseline Conjugation Assay this system can be reduced to three simple data collections: Lysis Assay, Anti-Transformation Assay, and a Colony PCR. This is how the entire biocontainment assay can Engineer Success.

The Toxin-Antitoxin layer of Synterception is utilizing the Type V toxin, GhoT, which disrupts the proton motive force by damaging the cell membrane. The corresponding antitoxin, GhoS, cleaves GhoT mRNA, thereby inhibiting its translation [1]. Our experimental design was to place GhoT under an inducible promoter on one plasmid, and have GhoS on a separate inducible plasmid. Since the GhoST system was recently discovered, our goal was to characterize the system in E. coli by determining the levels of induction that would kill the cells when only the toxin plasmid was present, as well as the levels of induction of the antitoxin plasmid that would rescue the cells from the toxin. Our next goal was to incorporate GhoS into the genome of E. coli, while GhoT would still be present on a plasmid that would in theory contain the synthetic gene that needs to be contained. This would protect our “biocontained” strain from the toxin, but if the plasmid is transferred to another bacteria, GhoT would kill the recipient. One of the main reasons we chose to use the GhoST toxin antitoxin system is that it the toxin is a small gene and protein, so expressing it in the cell would hopefully not cause too much of a metabolic burden. 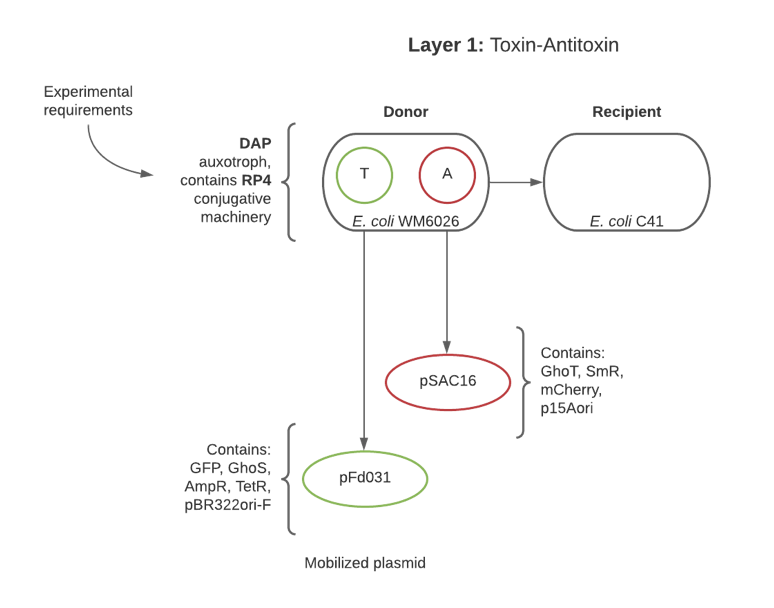 
The next layer aims to prohibit gene-of-interest expression in possible recipient cells. We will approach this with the non-native T7 polymerase system. T7 polymerase is a well-characterized phage RNA polymerase that is not typically found in non-engineered E. coli strains. The T7 promoter allows for strong, constitutive gene-of-interest expression, but recognizes promoter elements not natively found in most E. coli or other microbial species. We plan to place the gene of interest (in our case, a fluorescent reporter gene) under the control of the T7 promoter while integrating the T7 polymerase gene onto the E. coli chromosome in hopes that the gene will not be transcribed if the plasmid transfers to a cell that does not express T7 polymerase. Our greatest area of concern with this strategy is the possibility of a promoter mutation that would allow for gene expression in the absence of T7 polymerase. To assess this risk and determine the viability of this strategy as a biocontainment measure, we will transform E. coli both with and without T7 polymerase expression with a plasmid containing a fluorescent reporter gene under the control of the T7 promoter and determine the approximate rate of mutations that result in a failure of the biocontainment layer. 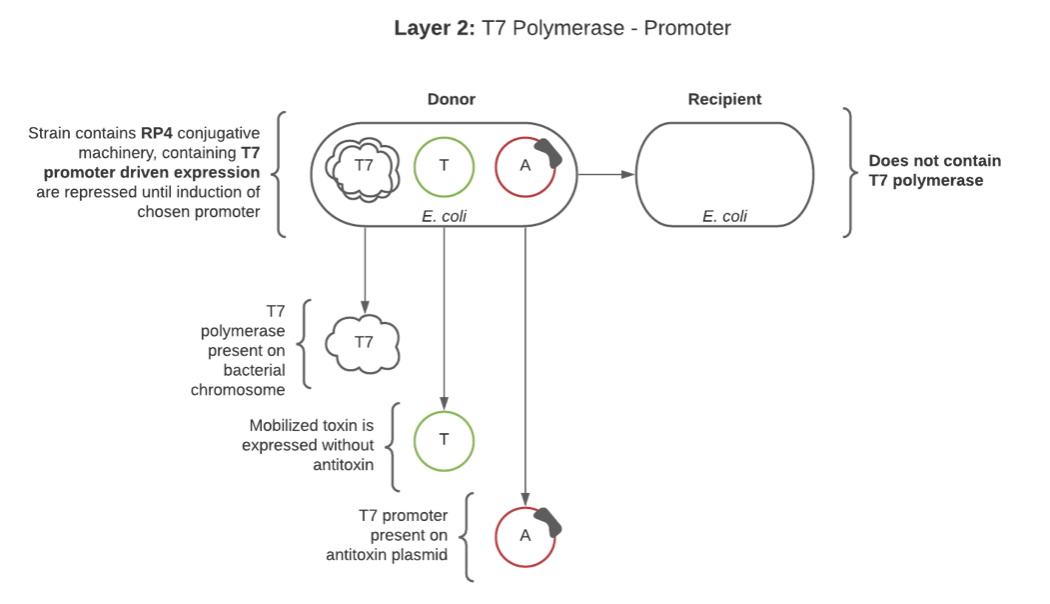 The goal of the final biocontainment layer is to prevent the uptake of conjugative plasmids from the surrounding microbiome, limiting the avenues for spread of recombinant DNA. To accomplish this, we are working on building an optimized CRISPR array using both bioinformatics and wet-lab approaches to target a broad range of natural conjugative plasmids. We are currently working to identify conserved sequences across conjugative plasmid families and will test these sequences as guide RNAs against promiscuous self-transmissible plasmids our system might encounter. This method in theory will significantly reduce the incidence of conjugation in transgenic microbes. 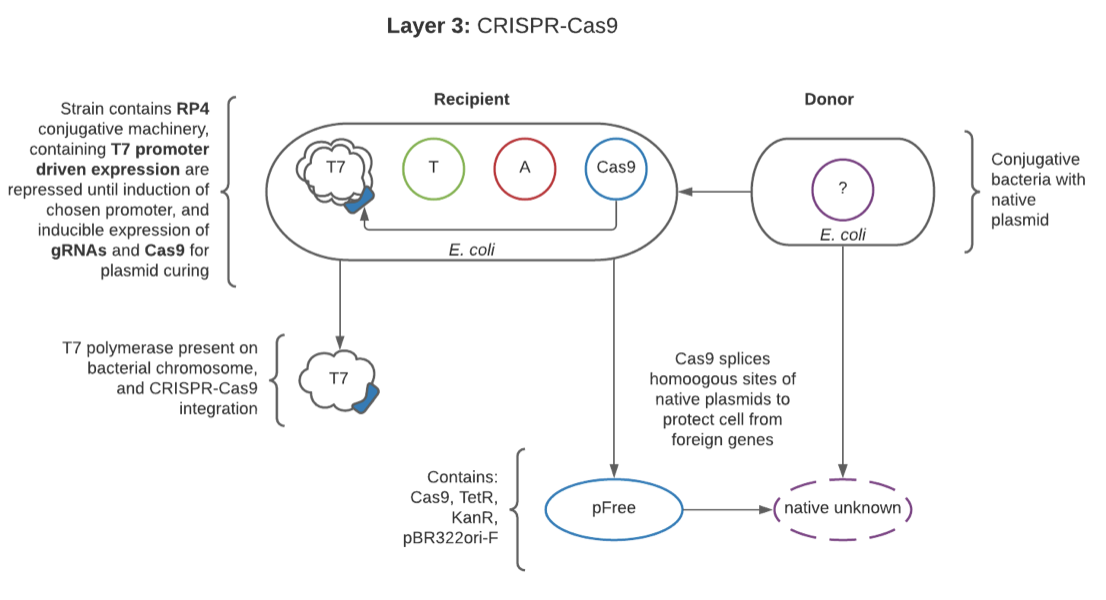 Biocontainment is especially essential with microorganisms, given their capacity for horizontal gene transfer among one another. Should a selectively favorable gene be engineered into a microbe and released into the environment, this favorable pathway could easily spread to other organisms in a wild population. Therefore,the gene pool would be altered as the gene proliferates throughout it.

As mentioned, modern microbiology has evolved to more complex technology as it relates to biosafety. Although the establishment of molecular biology and alike was only solidified in the 17th century, and modern medicine shortly after in the 20th, the progression of biocontainment follows suit. With an abundance of robust and novel strategies, biocontainment continues to be a forefront of synthetic biology.

Physical containment prevails as the simplest contamination prevention by localizing a microbe to a specific environment, where survival elsewhere is disadvantageous. Here, auxotrophs present a dependency on nutrients provided in the environment which prevent its escape, also known as a bioreactor . Our team utilized Escherichia coli WM3064, a DAP (diaminopimelic acid) in the Conjugative Baseline Assay, as a preemptive selection of the donor strain. However, since the focus of Michigan State iGEM’s research is to halt unintended transfer to other microbes, the group explored containment options beyond a controlled environment.

Implementation of a biologically contained organism begs the question of unintended escape frequency. A successful example of a Synterception organism is one in which the survival ratio is negligibly low.

While physical containment is an efficient containment technique, toxin-antitoxin systems actively degrade mRNA, DNA, and proteins. Kill switches, regulatory biomolecules, introduce another containment mechanism that can be used to target destruction of cellular parts. There are five established types of TA systems that solidify the containment of synthetic constructs. These systems are distinguished by their attack mechanisms.

The type V TA system utilized in this experiment degrades proteins in the cell by targeting the mRNA.GhoST works dynamically to regulate the site-specific translatome of the toxin by eliminating or expressing key mRNA in the toxin ghoT. GhoT, a small hydrophobic 57 amino acid peptide, embeds in the inner membrane of E. coli to induce cell decay. In the following facets the cell fails to maintain its structural integrity: breakdown of cell membrane at its poles, a hyperextension periplasmic space, and extracellular nucleoid leakage. To counteract the effects of GhoT, GhoS cleaves the toxin’s mRNA to regulate its expression. While some studies suggest that msqRA, a type II TA system, has downstream regulation of GhoST, the team focuses on the endoribonuclease responsible for membrane damage, decreased intracellular ATP levels, and intervention of the proton motive force.

This TA system suited the needs of a comprehensive biocontainment system because of its well-documented behavior and detached influence from physiological conditions. Implementation of GhoST would demonstrate containment outside an intended environment and an additional layer of protection to a synthetic vector.

In order to destroy foreign DNA, a defense mechanism of containment was employed. CRISPR-Cas9 has many applications in gene editing. For this research, it was utilized for its type II system, cleaving DNA. In theory, compromising plasmids entering the cell can be cleaved by CRISPR-Cas9 machinery. Inspired by Hong Kong University iGEM 2015, where a CRISPR kill switch was used to inhibit replication of bacteria, the Michigan State team proposed a similar ideology with plasmids. Instead, the sgRNAs responsible for cas9 binding can be designed using multiple broad-range consensus sequences that splice incoming unfamiliar plasmids. Using bioinformatics strategies, this was achieved for a variety of incompatible plasmid groups.

Though an evolved biocontainment system involves engineering a minimal genome, a native promoter system can also simplify and preserve the gene of interest. By introducing a polymerase on the bacterial chromosome, only then can the corresponding promoter be translated on the vector. A previous experimentation with promoter sequences involved tet to control the translation of three essential tRNA genes. Temperature triggers the activity of the promoter and regulates the E. coli growth indirectly. This philosophy was adapted for the comprehensive biocontainment system in this project.

The end-point method differentiates the rate of plasmid transfer, which provides the basis of calculations for horizontal gene transfer observed. The conclusions from the protocol combined with computational results, yielded tools and recommendations for an extensive biocontainment system.