Biocontainment is the process by which synthetic biologists keep recombinant DNA isolated and in its proper place and host. Most often, this is done by physically containing the transgenic organism in a sanitary environment, such as within the safety of a laboratory [1]. However, during initial discussions of the many possible applications of synthetic biology, the Michigan State University team realized that biocontainment concerns currently pose a number of ethical and practical limitations to adoption of many recombinant technologies. If stringent physical safety measures were not necessary, synthetic biology would be enabled to tackle numerous challenges facing the world today [2].
As one straightforward example, Bioremediation of recalcitrant chemicals and other toxic compounds could be performed by direct application of engineered microbes to contaminated sites. Similarly, fields could be supplemented with nitrogen-fixing bacteria to eliminate the need for environmentally harmful fertilizers. More broadly, targeting various microbiomes - such as use of engineered probiotics for human health applications - could be accomplished without worry of off-target effects of transferred genetic modules. Even applications designed to operate in physically contained environments (e.g., fermenters) could benefit from the reduction of byproducts that are potentially harmful, allowing consideration of alternative feedstocks or reduced generation of hazardous wastes. Modern biotechnology and genetic engineering has the potential to solve contemporary issues in medicine, agronomy, climatology, as well as nutrition. However, with outdated legislation and limited biosafety regulations, synthetic biology solutions face major barriers to real-world implementation [3]. Rigorous safety measures are crucial to engineered microbes, which are capable of horizontal gene transfer. One only needs to look to the looming threat of antibiotic resistant bacteria to see the results of horizontal gene transfer in action. If selectively favorable genes were leaked into the environment and taken in by microbes, it could spread within the wild population like wildfire, forever altering the gene pool.
However, physical containment is not our only refuge in the fight against horizontal gene transfer. Advances in synthetic biology may allow us to build in safety mechanisms within the microbes themselves, coded in their very DNA. That is where Michigan State University’s iGEM team decided to invest their effort.

Michigan State University’s iGEM team aims to tackle frontiers of synthetic biology biosafety. Using a comprehensive, multi-tiered biocontainment strategy focused on preventing horizontal gene transfer, we designed three rationally-designed biocontainment approaches. They operate on the basis of preventing transfer of synthetic genetic constructs to unintended recipients. By methodically simulating the efficacy of our strategies, we hope to evaluate all facets of cellular behavior to ensure the all-encompassing security of the introduced synthetic part, our gene of interest.
The multi-tiered biocontainment system, implements and characterizes three separate approaches that strategically layer in order to curtail unwanted gene transfer. 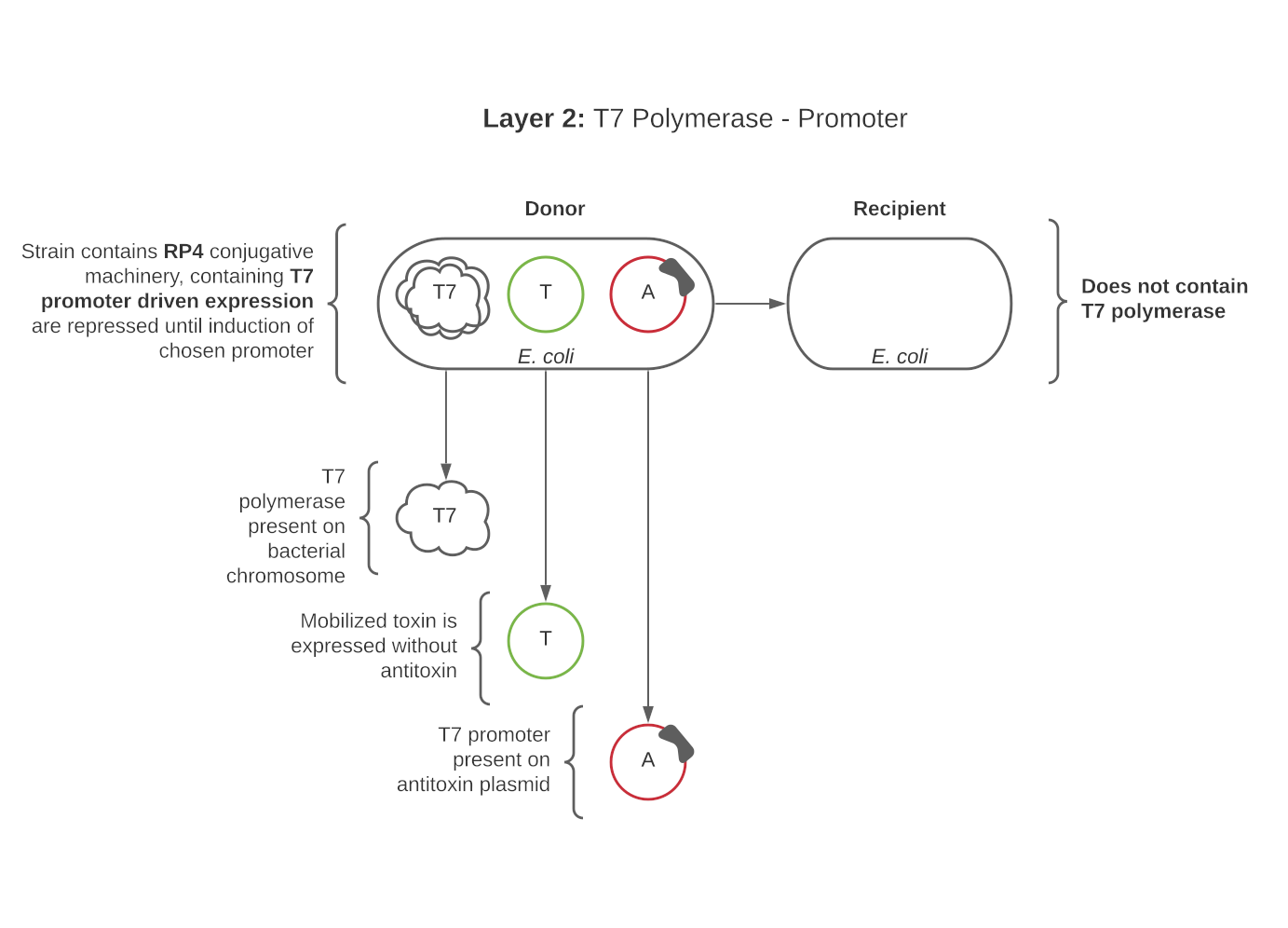 The first layer is a passive approach to inhibit/decrease expression of gene(s)-of-interest by utilizing a non-native promoter that should not be effectively recognized in most unintended recipient cells. As a well-characterized module of function that is not naturally recognized in bacteria lacking an orthogonal polymerase, we chose to evaluate the T7 promoter [4].

A second layer of defense relies on the selective lysis of potential hosts that inadvertently take up the engineered circuit. This approach involves physically connecting the gene(s)-of-interest to the GhoT toxin, which will lyse recipient cells that do not possess the corresponding ‘antidote gene’ (GhoS) that will be separately encoded in the chassis genome [5,6]. 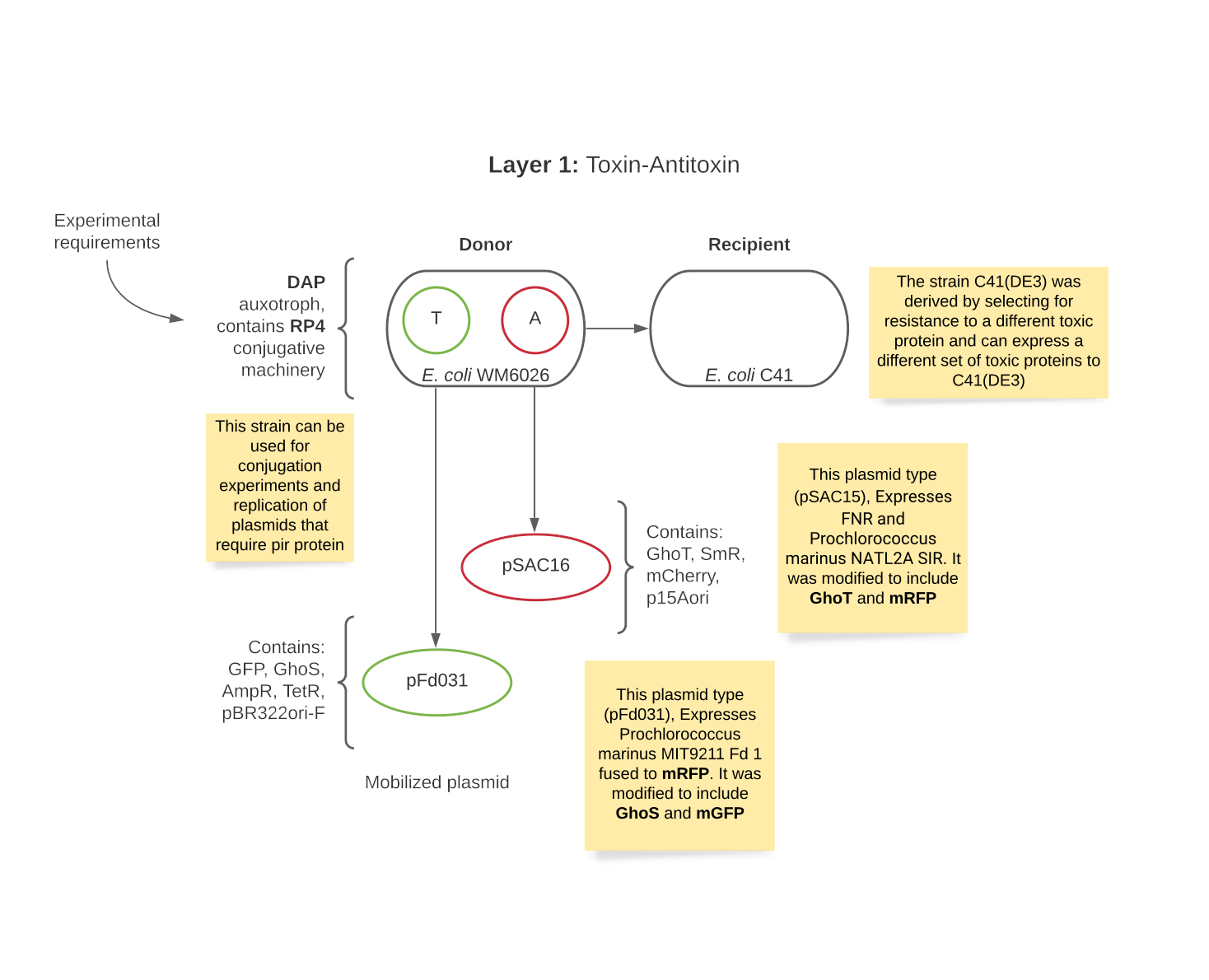 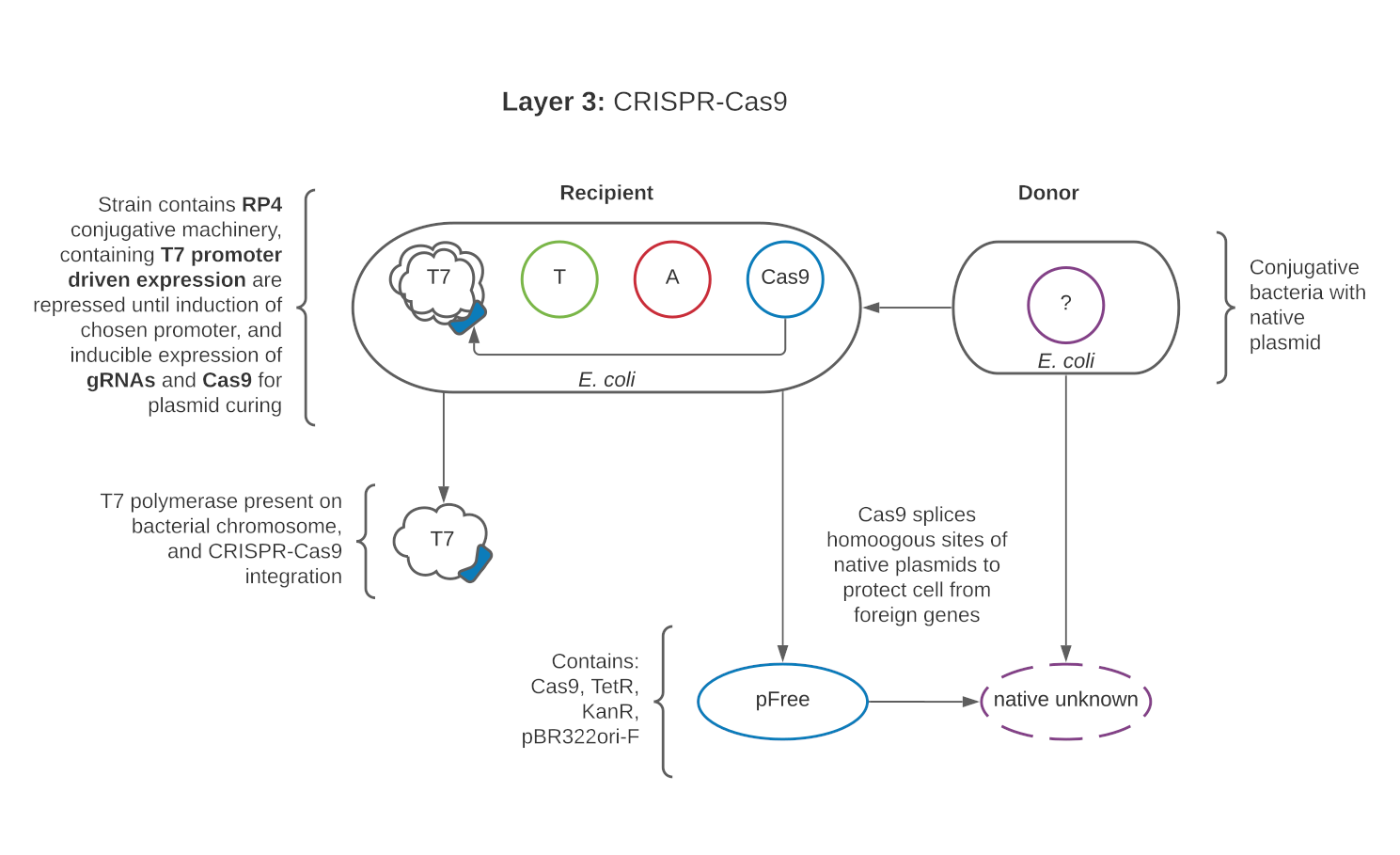 Finally, the third layer aims to reduce the incidence of conjugation by preventing the translation of conjugative plasmids via an artificial CRISPR-Cas9 immunity system.

A world in which synthetic biological constructs could be applied to the world’s many problems would be a splendid one to live in. See Proposed Implementation for more.