The project consisted of 2 sections completed consecutively. The first being the Drylab section that was completed at the beginning of the year when Covid-19 regulations were heavily implemented. It consisted of the creation of the spacer system as well as a metabolic model. Once able to access the lab, the team continued on with the Wetlab work which included testing the spacer system using PCR, Gels, and Sequencing, and completing the ruminal simulation(Gut in Glass).

The Spacer system is part of our contribution to future iGEM teams and represents a buffer system for the targeted gene.

The idea of the Spacer system is that we can create new gBlocks using PCR with the single genes. These newly obtained constructs are then able to be combined with one another. This allows for varying combinations of any gene sequences that have the correct overhangs complementary to each other. The results of testing the Spacer in SnapGene cloning algorithms showed the full integration of the developed Forward and Back spacers into the tested genes. The conducted simulation of Gibson assembly with specific primers that would anneal to the spacers run successfully.

In the wetlab, PCR's were run successfully, and combinations were achieved using Gibson assembly. The assembled genes, which were inserted into a plasmid, were transformed into E.coli bacteria, grown on agar plates using Kanamycin as a selective condition, and re-plated once growth was detected. After successful mini-preps, both agarose gels and sequencing results confirmed the efficacy of the spacer system. Therefore, this new part can be further used to assess varying gene combinations with basic lab procedures, independent from outside sources.

With this information, we can create an estimate of how much bromide we need to include in our feed additive to generate an amount of bromoform that is sufficient for the elimination of methanogenesis in cow rumen.
`
Modelling Page

Plasmids with sets of triplex, duplex, and single genes were transformed, and multiple colonies were selected for each of them. To verify the authenticity of the genetic composition of the colonies with the predicted, sequences were successfully extracted and checked for the right genes using a miniprep procedure and visualization via gel electrophoresis. According to the results, only colonies with single and duplex genes gave successful growth, which was predictable and did not interfere with the flow of further tests. 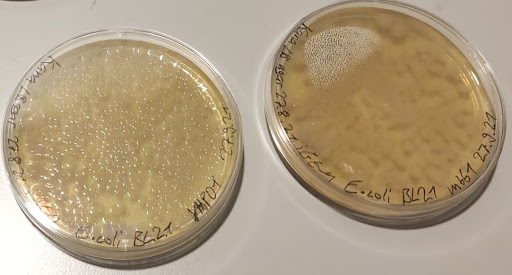 Since the Spacer System was used in each gene construct, the g-blocks could be generated in one PCR cycle with all the corresponding overhangs necessary for their assembly. In our case, small adjustments to the temperature mode of the procedure were introduced due to the temperature sensitivity of the primers that anneal with the Back spacer, which contains the overhang of the Forward spacer: if the temperature is too high, reverse binding of the primer may take place. This means that the primer would anneal on the overhang side which is complementary to the Forward Spacer rather than the intended location on the Back Spacer. With these considerations in place, the spacers proved to be effective in the generation of overhangs necessary for Gibson assembly. 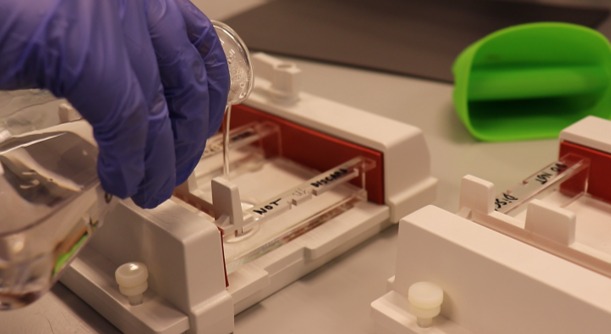 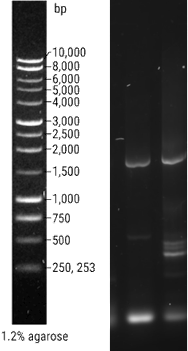 With the help of regularly conducted gels, the presence of single and duplex genes in samples was constantly monitored. To facilitate gene restriction digestion, the restriction sites were placed in the Spacer system Specific unique enzyme cutters were used to prevent any accidental nicks in the gene, as these would result in "noise" in visual representation. A similar procedure was used with the duplex genes, while single gene constructs were shown to be transformed successfully, that is, to have correct band location after restriction digestion. To ensure that constructed genes are present and perform as desired, the genotypes of different colonies underwent sequencing. Two out of six single gene constructs (MBB1 and CcVHPO1) were able to match up with complete accuracy with the constructs designed, so they were selected for further protein expression and potential testing in the Gut in Glass ruminal simulation.

Further protein extraction did not provide us with useful insight about the fact of the presence of bromoform, and we intend to conduct further analyses to confirm the fact of its creation, with the expectation of results similar to the data of the metabolic model output.

Overall, the control simulation produced much more gas than the bromoform treated simulation. Yet there were different steepness’ of the graphs over time, as can be seen in charts 1 and 2. 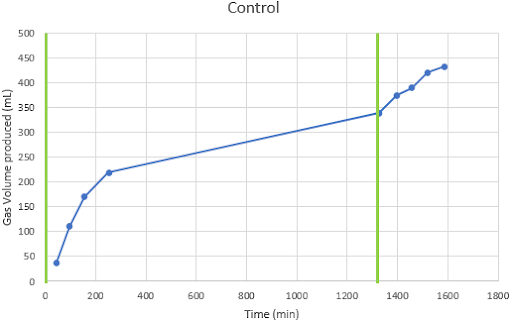 Chart 1 Amounts of gas produced over a time period of 26 hours and 40 minutes. Green lines represent removal of old feed and addition of new feed. 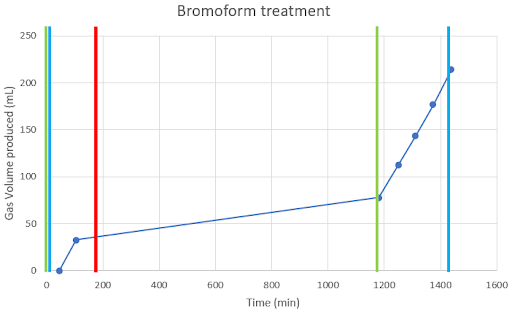 Chart 2 Amounts of gas produced over a time period of 26 hours and 40 minutes. Green lines represent removal of old feed and addition of new feed.

The red line represents an invalid reading. Blue lines indicate the addition of 20uL of Bromoform.

Discussion:
The bromoform treatment did increase its production on the second day, which may be due to the initial bromoform being used up. The stagnant gas production overnight can be explained by the lack of newly added saliva buffer and feed. The production increased once again on the next day, as a new buffer and feed was added, therefore confirming that the buffer and feed are necessary additions to the simulation.

This experiment gives us a great basis to work with in future experiments, as it is confirmed as anaerobic, has a way of measuring and trapping produced gas, and allows for control over most variables. In future experiments, fatty acid concentrations would be measured, along specific methane gas content measurements. These experiments will use the same setup as the one described here. For further reading, see here.