We aim to develop a precise drug delivery system to target cells. After searching through the literature, we selected vesicles as a base for our system. Their established role in cell to cell communications, naturally low toxicity and immunogenicity, is their strong advantage . A point to note, this system needs targeting and packaging cargo. The first one is the syncytin that specifically binds to receptors on the surface of certain cancer cells (e.g. colorectal adenocarcinoma). In this way, the vesicles fuse with the target cell membrane and bypass the endosomal pathway. The vesicular cargo is mRNA modified with a psi RNA packaging signal that can be recognized by the RNA binding domain. To see more of our delivery system background, go to our vesicles project Description.

The first part of our plan consisted in cloning the endogenous retroviral protein syncytin (ERVW-1) into an Evrogen turboGFP N vector for amplification in E. coli. This vector was chosen for studying how fusion between Syncytin and GFP would affect its activity. Therefore, we cloned two versions of syncytin, first with stop codon and second one without it, into the same vector to study the potential efficiency differences. Syncytin was initially obtained by amplifying it from the MCF7’s cDNA. We isolated total RNA from MCF-7 cells and performed reverse transcription followed by PCR for the ERVW-1 gene. Using electrophoresis, we validated the result of obtaining cDNA of the ERVW-1 gene from MCF-7 cells and three fragments of different lengths were found, one of which resembled the expected length of ERVW-1. We assumed that this is due to the fact that our primers also annealed some other sequences present in the MCF-7 culture, which were also present in the total cDNA. In this regard, it was decided to cut a band corresponding to the length of ERVW-1 from the gel and repeat PCR. However, in the next round of PCR, we also observed three bands corresponding to the same lengths. We believe that this is due to poor separation of these three fragments on the gel, due to which some part of the non-target two genes nevertheless, when excised from the gel, got into the excised piece of gel and was re-amplified. After cloning the sample obtained from MCF7 and sending it for sequencing in Evrogen, we discovered that the gene was highly mutated. Because of this failure, we decided to order the synthesis of the syncytin gene from Twist Bioscience. Having obtained this gene, we repeated PCR and got the required fragment.

Figure 1. Blast Alignment between sequenced fragment of Syncytin obtained from MCF7 cell line (top) and expected Syncytin sequence (bottom). Total of 51 mutations were found only in this region, including insertions and deletions. Because of a high percentage of errors, we decide to use the services of Twist Bioscience and ordered gene synthesis. 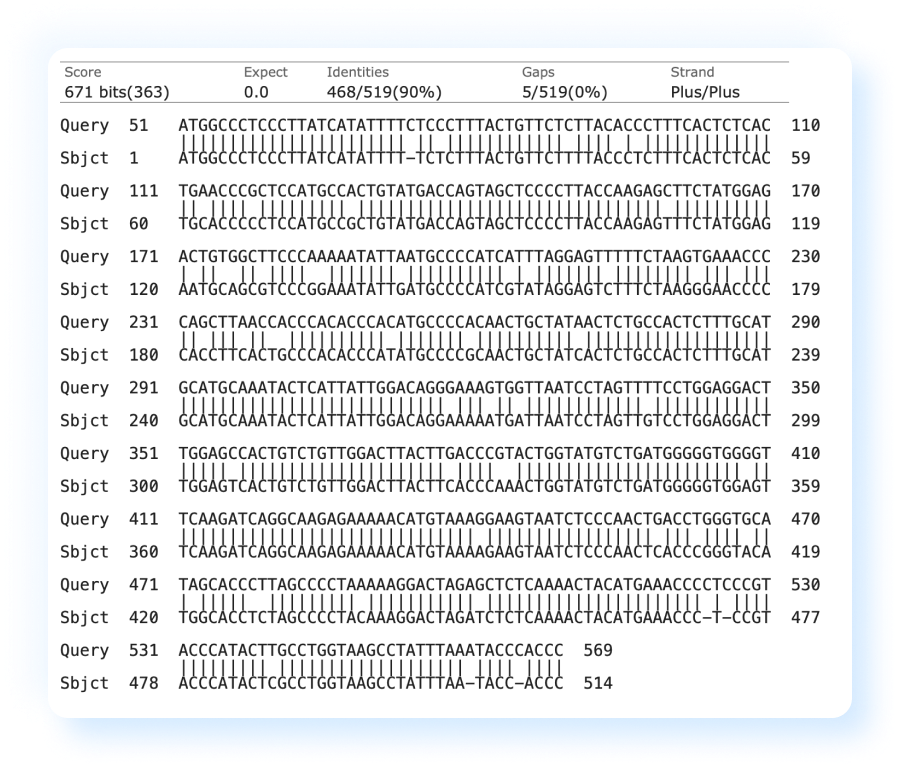 For the second cloning, we used the b-galactosidase (lacZ) gene, from the iGEM kit obtained by PCR and cloned it into the Evrogen turboGFP C vector. This combination of reporters makes it possible to detect the GFP luminescence, and also to carry out blue-white selection. These reporters will be later used to check that sorting and transporting vesicles’ content was successful. In addition, this construction will be used as a backbone for fragments in the Clone II part.

Last cloning in this series was aimed to solve the RNA recognition problem. For it, we clone gag-polyprotein, which includes the RNA-binding domain (RBD) into the lentiviral vector, for stable transfection. Gag protein will be responsible for recognising psi-RNA packaging signal and formation of vesicles through ESCRT machinery. The gag-polyprotein gene was kindly provided by our instructor Evgenii Lunev (Institute of Gene Biology, Russian Academy of Sciences), and the plasmid was given by the Laboratory of Cell Signalling Regulation. To see more about cloning I, go to our Experiments page.

After consulting with the Marlin Biotech company, we listened to their advice, and started this stage by optimizing the efficiency of RNA translation. Adding IRES will help facilitate the entry of the ribosome onto our mRNA and thus increase the expression of the target mRNA protein. Additionally, we learned from Marlin that for successful interaction with RBD, other 5'-UTR regions of HIV-1 (and not just the psi-short signal) may also be required. Therefore, we amplified psi-short and full 5'-UTR region (psi-long) RNA packaging signals. Psi-short was obtained from the Laboratory of Cell Signalling Regulation, while psi-long was obtained by gene synthesis from Evrogen. As all basic components were obtained, we used Gibson Assembly to create these constructions:

All construction except for the 3rd one were obtained on the first try. This may be explained by the fact that 3rd construction demanded assembly of larger fragments then any other. Therefore, we decided to double the added weight of fragments, which resulted in successful assembly.

First four were used to test the effect of IRES/ Psi-short vs Psi-long, and the last one is a negative control addition of which was also suggested by Marlin company. To see more about cloning II, go to our Experiments page.

By using plasmids obtained in the previous steps, we transfected MCF-7 cells with them by electroporation using the Lonze kit. Therefore, we had 5 wells with Syncytin (with stop codon), gag-polyprotein and one of the constructions obtained in a previous step. Two days after nucleofection we observed luminescence in all wells. However, those samples that had constructions with psi-long showed significantly lower luminescence than the rest of them.

Vesicles are naturally expressed by the MCF7 cells in the supernatant. Therefore we immediately collected and dripped it onto HT-29 cells. HT-29 was chosen as a target for our vesicles as they contain syncytin-1 receptors. After a single day since adding vesicles, we observed GFP luminescence only in the dish to which vesicles with 5’-psi(short)-IRES-GFP-lacZ-3’ construction were added.

After obtaining the plasmids we tested each of them by gel electrophoresis (Figures 2 to 4), and by sending them for sequencing to Evrogen, to be sure that all data is correct. More on that at the Results page. 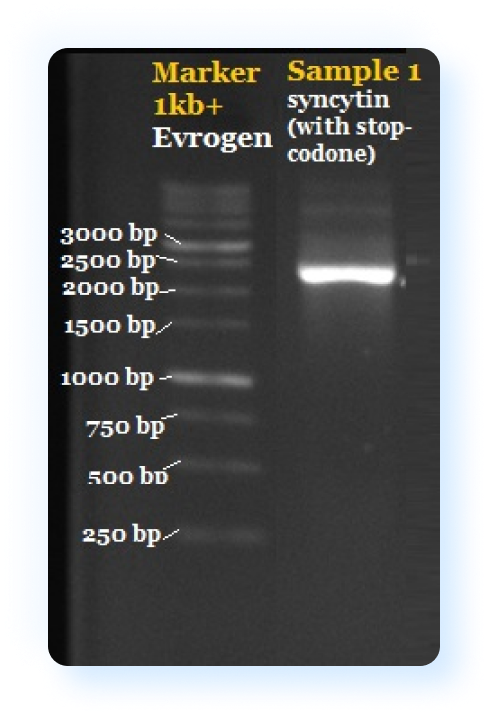 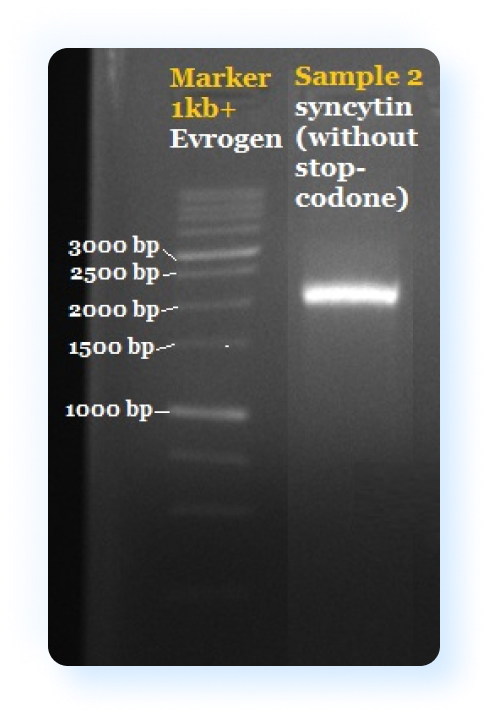 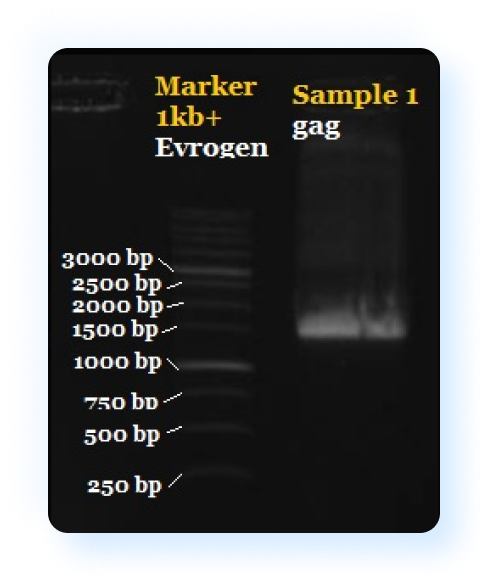 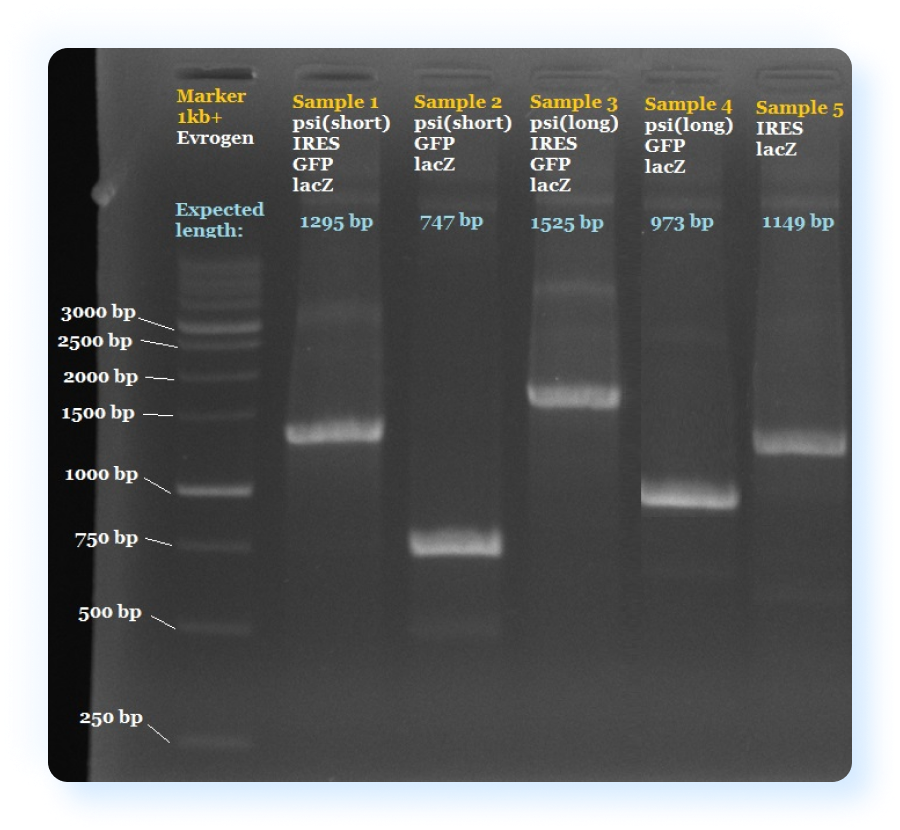 When it comes to testing our system as a whole, addition of supernatant containing vesicles to the HT-29 cells revealed that, vesicles containing 5’-psi(short)-IRES-GFP-lacZ-3’ structure are able to cause GFP luminescence in the targeted cells (Figure 5). More details on the Experiments page

Figure 5. HT-29 cells treated with vesicles with 5’-psi(short)-IRES-GFP-lacZ-3’ construction. Expression of GFP was observed after a single day since treatment. 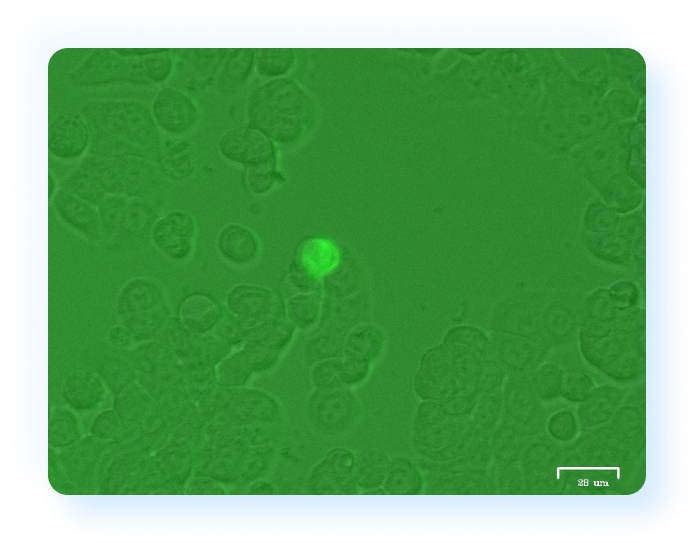 Development of a targeted vesicle based drug delivery system presented a complicated challenge. Due to severe time constraints caused by the late and irregular provision of necessary laboratory equipment, the fact that gene synthesis provided by the iGEM is unavailable in Russia, and that use of the primary cell line is a poor source of unmutated DNA, we were unable to complete the latest steps of our project. However, even with incomplete data we still manage to find useful insights. First is that you should be very cautious during amplification of long gene sequences from cDNA obtained from primary cell lines. Using MCF7 as a source of the ERVW-1 gene proved to be unreliable, revealing multiple mutations and 2 off target products. Furthermore, cloning problems continued during implementation of Gibson assembly, as it was necessary to connect two rather large fragments: psi-long (356 nt) and IRES (551 nt). This problem was solved by adding doubled amounts of both psi-long and IRES to the reaction mixture. For the further step, from the Pavel Makarevich we learned that, initially proposed for vesicle formation, hTERT cell line is poorly transfected, however, they are highly susceptible to transduction. Therefore, we decided to change the producing cell line to MCF7.

Which showed appropriate results after nucleofection, as GFP luminescence was observed in all wells. Moreover, MCF7 cells expressed enough cells into supernatant that even without advance filtering or vesicle separation, our vesicles containing 5’-psi(short)-IRES-GFP-lacZ-3’ construction were able to cause GFP luminescence within target cells. Other constructions did not show the similar results, suggesting that presence of IRES does assist the translation of GFP mRNA, and that vesicles containing construction with psi-long require longer time to be produced in meaningful quantities (more on that on the Proof Of Concept page). All together we believe that even without finishing all the planned steps we proved that our system is working, and we will carry on our experiments to lay a foundation for future potential systems. Which with proper care could be used as potential therapeutic treatment for numerous diseases.
And hopefully deliver a cancer free world to you.