Inspiration&Application Overview How does the gag protein recognize the necessary RNA and package it into a vesicle? What is syncytin and how it gives the ability to EVs-to-cell effective fusion? Future Plans Summary References

Do you know that cancer is the second leading cause of death in many countries? Tens of millions of people are diagnosed with cancer every year, and more than half of them die from this disease. But the issue is expected to become even more significant because older people are more susceptible to cancer and the world’s population is ageing. Moreover, nearly all cancer therapies have long-term side effects and are often painful and exhausting for the patient. Therefore, the search for new and harmless approaches is absolutely necessary.

Cancer research has received a lot of attention in our universities' laboratories, in addition, many of our team members were interested in this area. But the topic was too broad for us to come to an agreement. Ilya Zubarev, who later became our PI, helped us to find a specific theme that suits our interests and opportunities. In our work, we improve and implement Ilya's idea, which came to him after a couple of years of research in this area.
We develop effective cancer therapy - an innovative drug delivery system - with an extremely low probability of dangerous side effects (e.g. immunogenicity or damage to healthy tissue).

Our system is based on 3 key parts:

Our idea is to use these three components to create an innovative targeted drug delivery system for the treatment of cancer (and presumably many other) diseases. However, before reaching such a global goal, it is necessary to conduct many experiments to achieve the most effective combination of components.

As the first step of our research, we decided to simulate and test our system in vitro. We chose MСF7 as the first component of the system - a cell line that produces vesicles. With the help of genetic insertions, we want to "teach" these cells to express oncosuppressive mRNA, to recognize it among the many other RNA of the cell, and to sort it using Gag and psi-signal into their vesicles, which can efficiently fuse with target cells thanks to syncytin.

Drug delivery system in vitro test. Vesicles with syncytin on their surface and correct mRNA fused with psi-signal inside (sorted by Gag) are collected and added to the cancer cell line (HT-29) which express syncytin’s receptor. After syncytin interacts with its receptor it causes fusion of the vesicle with the cancer cell enabling mRNA to suppress the malignancy.

After cells cultivation, the medium containing the vesicles is collected and filtered to obtain pure EVs for targeted therapy. We chose HT-29 as a target line that overexpresses syncytin receptors. And for convenient verification of the results at the initial stages, we have so far chosen GFP as mRNA.

How does the gag protein recognize the necessary RNA and package it into a vesicle?

Gag is a viral precursor protein that forms the virus particle and it is capable of recognizing the Ψ RNA packaging signal and binding to it. These functions are provided by 4 domains: the matrix domain (directs Gag to the plasma membrane and promotes the incorporation of the viral envelope glycoproteins); the capsid domain (drives Gag–Gag interactions); the nucleocapsid domain (packages the viral genomic RNA) and the p6 domain (enables efficient particle release) [2]. We hypothesized the success of using this protein for the formation of vesicles and sorting the desired mRNA in them. 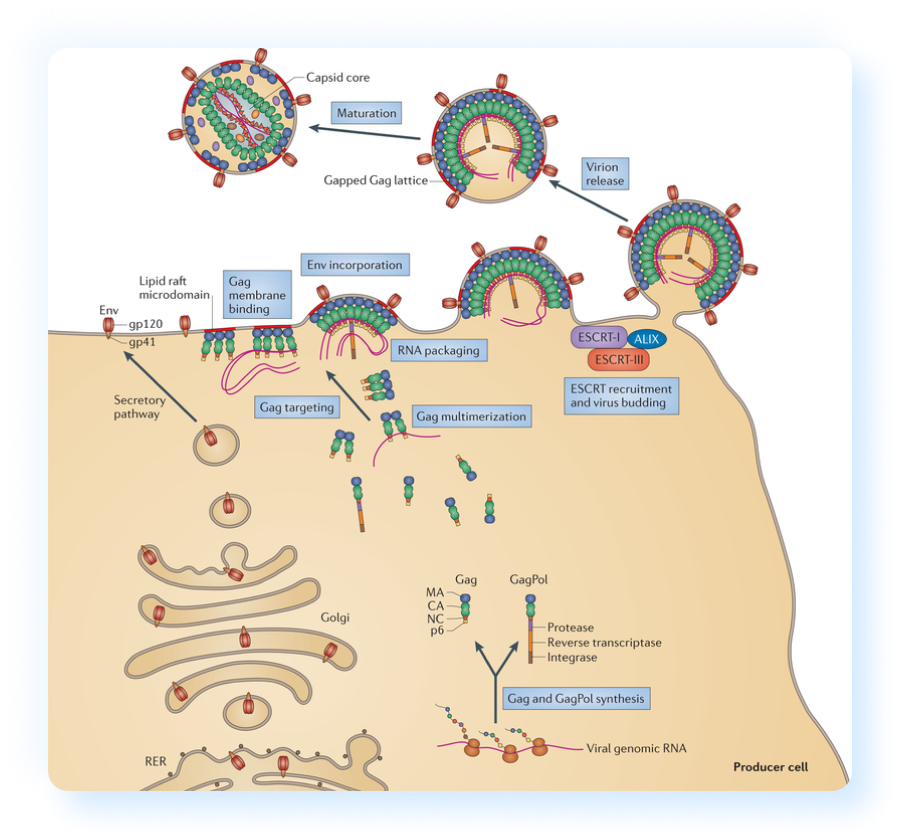 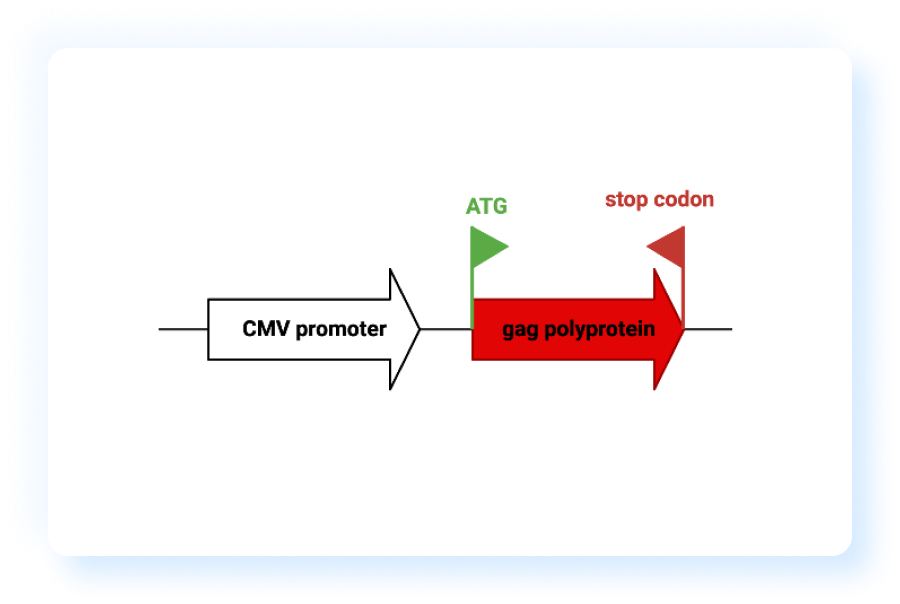 Moreover, since Gag plays an essential role in forming viral capsids, we want to test if it can increase the production of EVs by light scattering (trajectory analysis of NTA nanoparticles).

Obviously, Gag can not work properly without a special region that is responsible for distinguishing viral RNA from host cell RNA. This is just the viral RNA Ψ packing signal (or psi-signal) - a small (around 150-250 bases) RNA sequence near the 5′ end of vRNA with several conserved stem-loops [3]. So we tried to use it in our system.

We take HIV-1 variants of Gag and psi-signal for our project. However, we discovered, that there are two versions of psi-signal - short and long. The long version consisted of the whole HIV1 5’-UTR including the packaging signal, while the short one consists of the packaging signal only. It is still unknown which type of psi-signal is recognized by Gag more effectively. Thus we assembled two genetic constructions for our experiments to solve this problem.

In addition, after consultation with the Marlin company (see more information on the Engineering success page), we suggested making an IRES (internal ribosomal entry site) sequence between psi-signal and mRNA. This ribosome entry site may help facilitate the entry of the ribosome onto our mRNA and thus increase the expression of the protein from the target mRNA [4].

Gene insertions combinations of psi-signal variants and mRNA (GFP) with or without IRES. 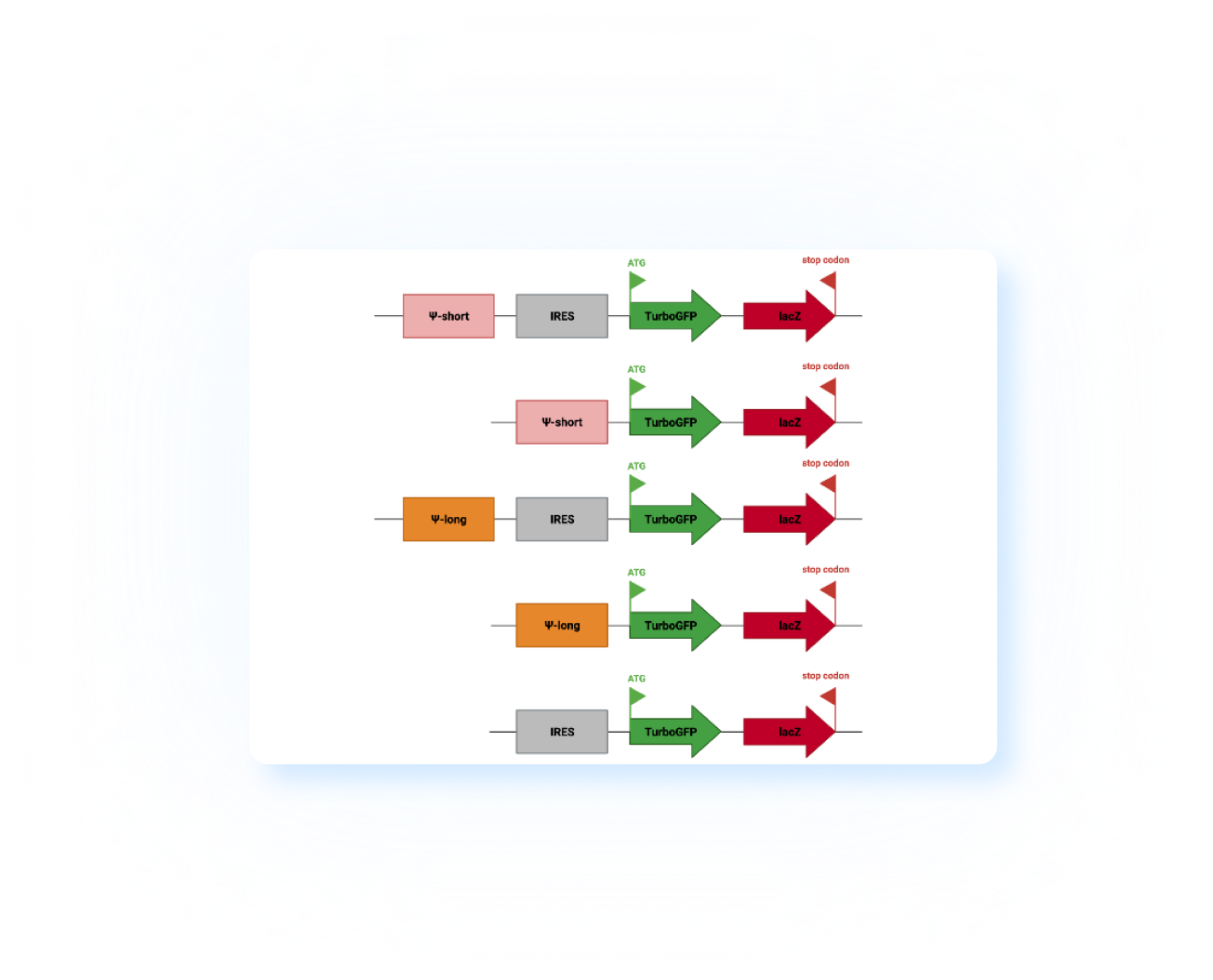 Thus we make different combinations of these constructions. Comparing the expression level and the loading efficiency of the vesicles we want to find out the best variant for our system. In addition, we want to understand how the untranslated region affects the efficiency of ribosome entry and translation in vitro.

What is syncytin and how it gives the ability to EVs-to-cell effective fusion?

Why should we ensure the fusion of the vesicle with the cell at all? Actually, different forces like hydration repulsion, hydrophobic attraction, steric hindrance and the Van der Waals force prevent passive membrane fusion. Simply put, if you just pour a suspension of vesicles onto a monolayer of cells, then the probability of their fusion will be extremely low. Moreover, there is another factor that reduces the efficiency of the delivery of the particles’ contents (be it vesicles, synthetic spheroids, nanoparticles, or something else) into the cell, namely the endosomal pathway of absorption followed by lysis. As a result of this process, all foreign substances that enter the cell from the outside are degraded under the influence of special enzymes. Thus, many drug delivery systems are ineffective and we are going to avoid it.

Cell fusion is essential during different biological processes, e.g. fertilization, placental development and skeletal muscle formation [5]. It has several complicated steps. The final one - the merging of the two plasma membranes - is driven by syncytin membrane surface proteins. Syncytin-1, which is more studied than other proteins of this type, is coded by the retroviral env gene, which was domesticated. Being on the surface of one cell after interaction with its receptor (hASCT1) on the surface of another cell, syncytin causes the fusion of these two membranes [6]. Normally, this protein and its receptor are expressed only in several tissues. Surprisingly, hASCT1 is turned out to be highly expressed in some cancer types, especially colorectal cancer. Thus, syncytin can bind to receptors on the surface of cancer cells and cause vesicle fusion with them.

According to the references, the exact mechanism of fusion proteins (as well as syncytin) action is still unclear. In general, the process takes place in several stages: 1. syncytin interaction with a receptor on the cell surface 2. syncytin interaction with a neighbouring membrane (perforation) and subsequent trimerization (or vice versa) 3. overcoming of the energy barrier and approximation of membranes 4. pore formation by syncytin trimmers [7]. 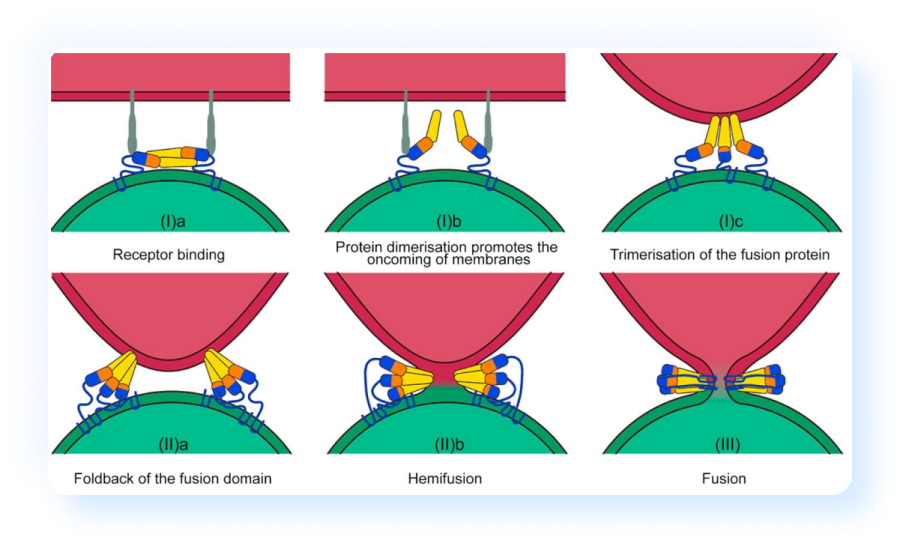 All in all, syncytin has several advantages:

That is why our team decided to use syncytin-1 in our system in order to enable targeted and effective delivery.

In order to prove that cell-to-vesicle fusion is caused precisely by syncytin, and not stochastically, we want to knock down the syncytin receptor to compare the efficiency of fusion (by the luminescence of GFP, which is loaded in EVs, in target cells).

The Team's further plans include obtaining functional proteins RNA to reprogram cells' fate and affect their metabolism. Besides, we are going to spend more time on verification our system in vitro (quantitative assessments of the efficiency of loading mRNA and microRNA into vesicles and EVs-to-cell fusion, cytotoxic test, etc.) and in vivo on mice models, including immunological tests. Moreover, besides syncytin, there are many other fusion proteins [6]. So we are looking forward to altering the fusion protein in order to test the new variant of our system for another application in some tissue-specific single-gene disorders treatment (see Proposed implementation page).

With our targeted drug delivery system, we will deliver a cancer-free world to you!