The objective behind our project is to develop a bioelectronic device able to quantify blood vitamin B12 (or cobalamin), thanks to the genetic modification of Escherichia coli and the use of Shewanella oneidensis, a metal-reducing bacteria. To develop our system, the experimental approach was divided in two main phases:


Phase 1 : Sensing of vitamin B12 and production of lactate

In order to obtain a production of lactate corresponding to the amount of vitamin B12 sensed, our final plasmid for phase 1 was design as followed : 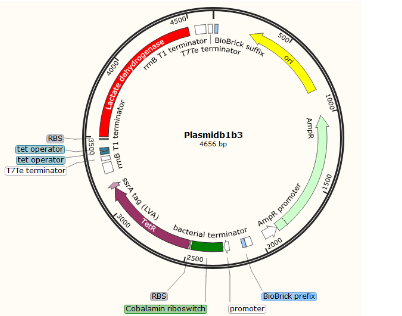 
As lactate production was not a common way to report riboswitch activity, this plasmid was split in two different ones: 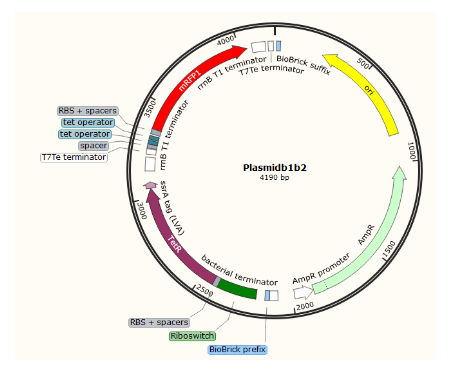 Figure 2 : Plasmid A for the reporting of the Cobalamin riboswitch activity (containing biobrick 1 & 2 (BBa_K3933005)) 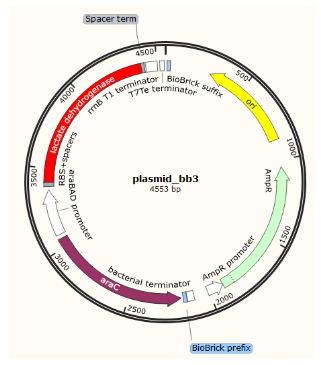 Figure 3 : Plasmid B for the arabinose-induced production of lactate (containing biobrick 3 (BBa_K3933006)) 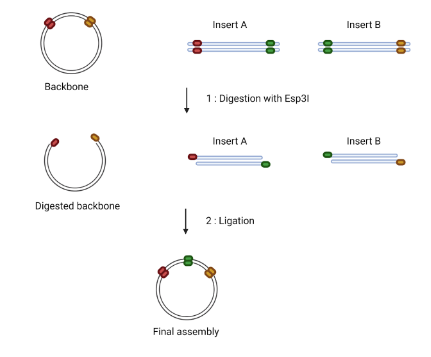 
A) Primer design and PCR


The Golden Gate Assembly technique mainly relies on the design of specific DNA overhangs, containing type II-S restriction enzyme sites. A more general structure for these overhangs is shown below :


The idea behind this step was to modify a pSB1A3 containing a RFP (BBa_J04450), our main backbone for restriction enzyme clonings used in our lab, in order to obtain a vector usable both for restriction enzyme cloning and for Golden Gate Assembly using BsmBI/Esp3I. To do so, we ordered a 121 synthesized fragment from IDT containing random nucleotides and 4 specific sites :


As shown on Figure 7, the fragment contains Prefix (XbaI) and Suffix (SpeI) restriction sites for insertion inside a Biobrick RFC[10] compatible backbone.


Figure 8 shows the recognition and cut sites of Esp3I. In order to perform Golden Gate Assembly, Esp3I sites have to be oriented in a specific way :


When obtained, DNA was resuspended and both the pSB1A3_BBa_J04450 and the DNA fragment were digested with XbaI and SpeI and ligated using a T4 DNA ligase. E. coli DH5-α were transformed using the obtained DNA and the construction was verified using PCR on colonies and digestion. 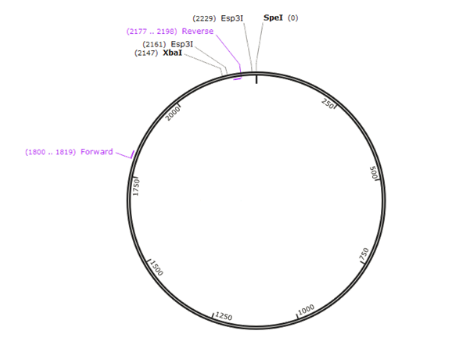 Results show that the fragment was correctly inserted into the backbone for nine colonies. Colonies were picked and grown into LB-Ampicilline liquid media for miniprep of plasmids.

After liquid growth, miniprep was done and plasmids were digested using Esp3I. Unfortunately, the Esp3I sample used was no longer viable : digestion was therefore done a second time later with a new enzyme sample on one clone. Figure 10 shows band sizes of undigested plasmids : 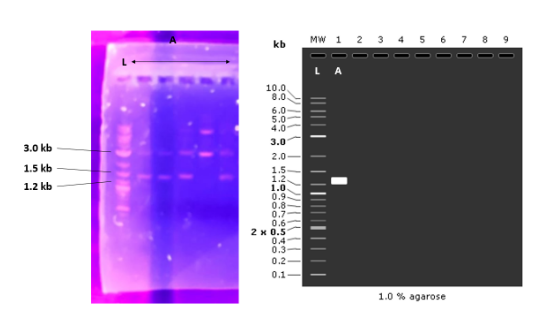 On the expected gel, the supercoiled form of the plasmid appears between 1.2 and 1.5kb. This band size is found for all clones, except for clone 19 who shows a band at higher sizes. This unexpected band can be explained by the ligation of the BBa_J04450 part between the insert and the backbone, as XbaI and SpeI digestions leave the same sticky ends.

For this step, inserts and the backbone are digested with Esp3I and ligated in the same tube, following the Golden Gate Assembly protocol.


Unfortunately, we did not manage to transform any bacteria after assembly. This could be explained by difficulties encountered to quantify low concentrations of DNA before assembly. We therefore changed our cloning strategy for CPEC, see more about this choice in engineering success. 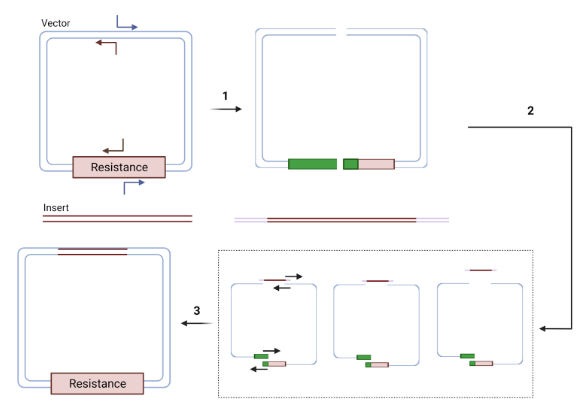 A) Amplification of inserts by PCR


Using 20 base-pair primers, inserts were amplified by PCR. Results are shown on figure 12. 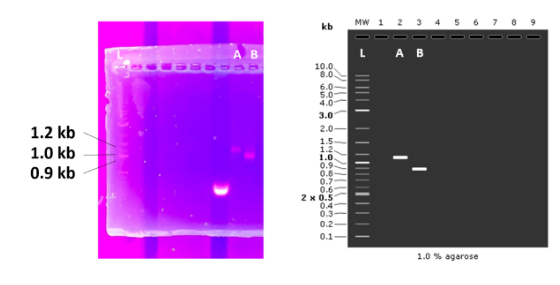 Bands are seen at the correct sizes, addition of overhang can be performed.


This step is done by using 50 base-pair primers containing the same 20 base-pair hybridization sequences as in step A) and 30 base-pair overhangs complementary to the backbone/insert sequences. 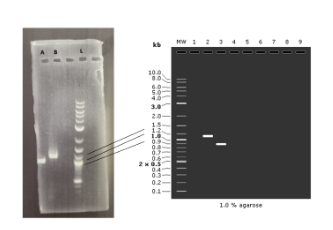 
Bands are seen at the correct sizes, fragments were correctly amplified with overhang primers.
Results show the correct band sizes for each insert. Fragments are therefore ready for CPEC reaction.


To make sure the reaction worked, this step was done on several miniprep preparations of the psB1A3 plasmid. Primer design follows the same rules for this step as in step A) Agarose gels in Figure 14 shows results after PCR.


Results show that linearized fragments were amplified for most of the plasmids tested. Addition of CPEC overhang can be performed on fragment A.


Addition of an overhang sequence is only done on fragment A to ligate back the ampicillin resistance inside the backbone. To do so, primer design is the same as step B. 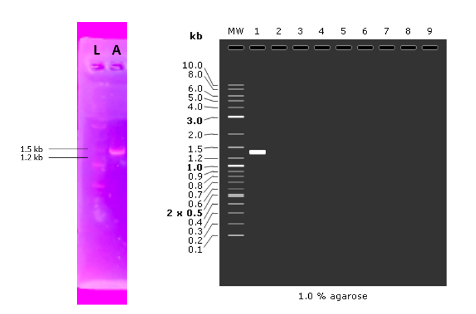 Results show that fragment B was correctly amplified with overhang primers. backbone fragments were ready for cloning.


After 24 hours of incubation, colonies grow on agar plates. PCR on colony was performed on some clones (Dish 1 on figure 15) to check the correct assembly of our biobricks. We made the mistake of plating only a part of our transformation product. More transformation product was therefore plated on agar plates in order to check assemblies (Dish 2 on figure 15). The next day, colonies were picked and grown overnight in LB media with ampicillin to perform miniprep.

These results suggest that white colonies were backbones without insert (around 2200 bp) and red colonies pSB1A3-RFP (contamination with positive controls).


Inserts were prepared correctly. However, Our first CPEC reaction did not result in any assembly. Due to time limitations, the experiment was not reproduced. Ways of improving this step can be found in engineering success.

Functional assays for biobricks 1 and 2

If assembly of biobrick 1 and 2 would have worked, we would have followed the following workflow to check riboswitch activity : 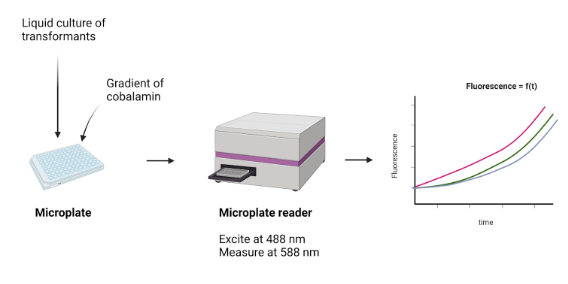 Figure 17 : Workflow for the evaluation of the cobalamin riboswitch activity (created with Biorender)

By following this workflow, we would have been able to evaluate both the activity of our riboswitch and its kinetics in one assay.

If the cobalamin riboswitch is effective, we expect the increase of fluorescence with both cobalamin concentration and time. For improvement of this part, see engineering success.

Initially, biobrick 3 should have been assembled with Golden Gate Assembly using kit plates. As mentioned above, we were not able to transform any bacteria from kit plates. We therefore chose to order a linearized fragment from IDT. Unfortunately, we never managed to clone or amplify this fragment.

Lactate production by the lactate dehydrogenase would have been measured under stimulation with arabinose, for different lactose concentrations.

Phase 2 : Development of a bioelectronic sensor for lactate

As explained before in Description and Contribution, we aim to use the bacteria Shewanella oneidensis (S. oneidensis) as a reporter system.

To do so, a lab-scale prototype was setup (figure 18), following experimental setups described in the article from Zeng et al. (2019) [1]. 48 hours culture of Shewanella oneidensis were diluted to obtain a DO600nm = 0.600 and 5 mL were inoculated into 45 mL of LB media in the prototype. The experiment was performed with various amounts of lactate in the media (40 mM, 20 mM, and 0 mM). Measures of voltage generated by Shewanella oneidensis were done on 500 minute periods.

Overall, the three curves show an increase in voltage over time. The rise in electricity production by our culture is higher and faster as concentration increases, until reaching a plateau around 300 mV. As rising in potential seems to be linked to lactate concentration, a curve was plotted using the No lactate condition as a control (figure 20). 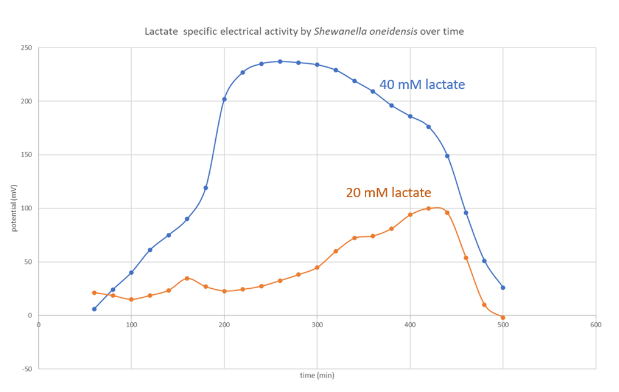 Unfortunately, issues with S. oneidensis stocks blocked our experiments for one month. We were therefore not able to produce more results with these experiments.


In order to confirm the link between lactate concentration and electricity production by S. oneidensis, more experiments should be made. Firstly, more experiments should be done by testing a great variety of lactate concentrations, as we aim to precisely evaluate lactate production by phase I. Moreover, other parameters should be evaluated : varying S. oneidensis DO, testing different co-culture ratios with E. coli, or changing LB media to minimal media without a carbon source to avoid background signal due to LB media. By testing all this parameters, we aim to fine tune the accuracy of our system.


Overall, results suggest that our system could be used to report lactate concentrations thanks to the production of electricity by Shewanella oneidensis in a few hours. Even though this reporting seems to reach a plateau after several hours, the fact that a signal difference can be detected early is promessing, suggesting that our system could be used as a fast and efficient way of reporting genetic reporter systems. By combining our system with Phase I designs, we expect that vitamin B12 could be quantified precisely and in a few minutes to hours in the context of a personal quantifying system.

+ Attempts of automatisation using different hardware/software solutions were made

+ A final prototype was modelled and 3D printed

- Due to difficulties encountered in Shewanella oneidensis growth, only a few experiments were done with the prototype