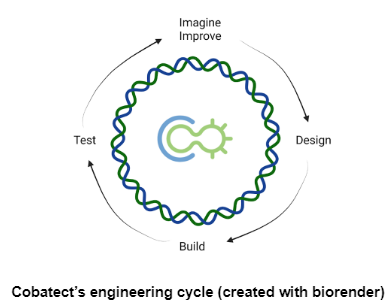 
The first phase of our project relies on one question : How to specifically sense vitamin B12 in our bacteria ? After going through scientific literature and several iGEM wiki pages, we identified the Cobalamin riboswitch as the basis of our sensing module. This riboswitch relies on the sequestration of the RBS located downstream DNA sequence to regulate expression. To see more about the mechanism of the riboswitch structure, see Description part. 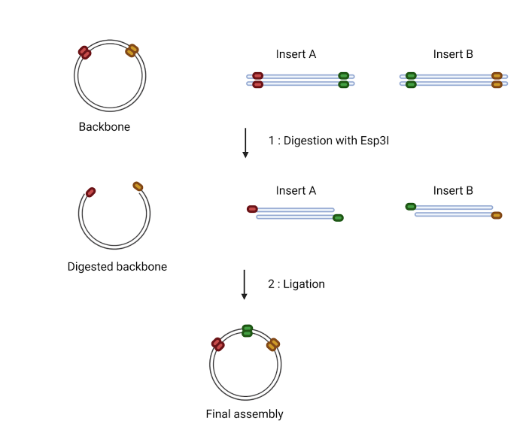 Before this workflow, specific sequences have to be added to each fragment. These sequences are specific to Esp3I and have the following general structure :

After trying several times, we considered changing strategy to CPEC (Circular Polymerase Extension Cloning). CPEC was chosen because of its simplicity [1] and because needed reagents could be obtained quickly (primers, polymerase, etc.), as the deadline was approaching. 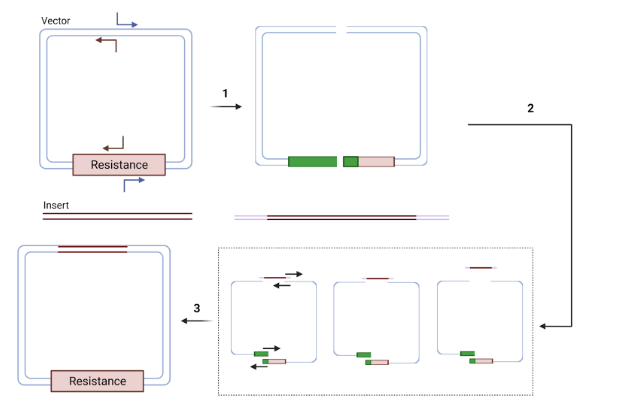 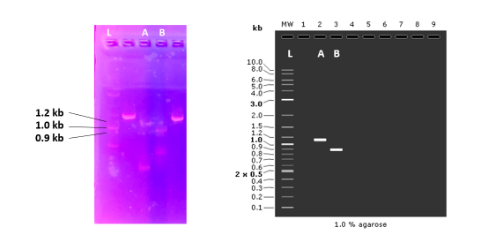 As we can see, the correct band sizes are present on the gel for both samples (A and B). However, non-specific bands can be seen (100 bp for fragment A and 400 bp for fragment B). Following these results, two strategies could have been applied : extracting fragments of interest on the gel or start over the experiment by improving the PCR protocol.

On figure 2, we can see that bands of interest show a relatively low intensity for a PCR product. We therefore decided to improve our strategy, by adding a PCR purification step before the second PCR. This ensures the purity of template DNA and might avoid the amplification of unwanted bands.

After a purification step on fragments of PCR products, step 2 was repeated. The corresponding agarose gel is shown below : 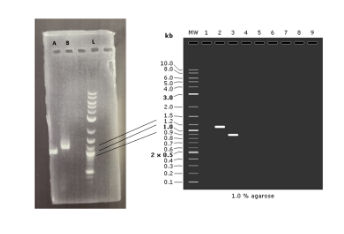 On the gel, we can see bands of the corresponding size, with a high intensity. No parasite bands appear. These results show that PCR purification before running our second PCR improved the addition of overhangs on previously amplified fragments.

As explained in the Results section, assembly did not work. Because of time limitations, the experiment was not repeated. A new way of improving the protocol would have been to treat backbone templates with DpnI after PCRs in order to avoid any unwanted transformation.


Due to the specific mechanism of regulation of our sensing system, particular attention had to be given to the Ribosome Binding Sites (or RBS) design. From the beginning of our project, we knew that changes would have to be made on RBS.

At first, we made the choice to test a standard iGEM RBS, the BBa_B0032 RBS (medium strength), in order to avoid any issues by using a previously used RBS. Our part design was the following :

This Biobrick should have been built using CPEC or Golden Gate Assembly (see Results).

In order to test our plasmid, The relative expression of RFP should have been measured by measuring red fluorescence on a fluorescent plate reader (exciting wl : 488 nm; detecting wl : 588 nm). This would have been done by growing transformants overnight with various amounts of vitamin B12, and following fluorescence through time (see Results).

We can expect from this experiment to link the increase of cobalamin concentration to the increase of measured fluorescence. As we want to precisely quantify cobalamin, we presume that signal could be optimized by modifying our biobricks.

The aim of this part is to obtain a precise signal from cobalamin riboswitch activity. We assume that results could have been optimized, as we tested only one riboswitch. Therefore, we tried to answer the following question : How can we improve our construct to optimize vitamin B12 quantification ?

In order to get a precise signal from our chassis, one way of optimizing the system could be the choice of designing different RBS in order to impact two different parameters. Firstly, modifying RBS is known as an effective strategy to control gene expression in bacteria [2]. Secondly, the cobalamin riboswitch is a RBS sequestering type of riboswitch : This means that protein expression is regulated through a conformational change of the RBS, as shown on the following figure.

A series of RBS of different strengths were designed on Salislab for each gene sequence. By making different combinations between our different biobricks, an optimized system could be developed. The best possible combination could be found with the following workflow : 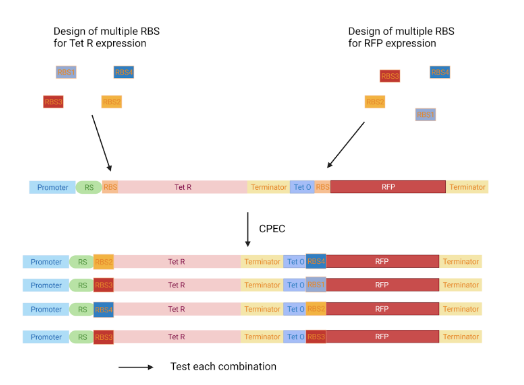 After creating this library of biobricks, the best one should be evaluated by transformation in bacteria and RFP expression measurements. Of course, the same procedure would have to be done when replacing the RFP by the lactate dehydrogenase.