Ionis Paris and UParis_BME are two Parisian iGEM teams, competing this year in the Diagnostics track. With ExoSwitch, UParis_BME aims to detect cancer miRNA levels in blood for early cancer diagnosis. With Cobatect, Ionis Paris works on a device that detects vitamin B12 levels in blood, in order to monitor vitamin deficiencies. At a first glance, our projects do not look very similar. But if you take a closer look, you will see that they are much more connected than what it seems.

What are UParis_BME using to detect cancer miRNAs? A Toehold switch, which belongs to the riboswitch family. What are Ionis Paris using to detect vitamin B12? A cobalamin riboswitch. You are still not convinced?

How do we want to implement our ideas? UParis_BME wants to use a microfluidic device to enable easy detection at home or in pharmacies. Ionis Paris wants to develop an arduino-based device for at home detection, without requiring professional assistance. Now do you see it?

Our projects are compatible on the technical aspect. Naturally, we collaborated throughout the year. Our teams, united by synthetic biology, are willing to revolutionize detection systems to resolve public health concerns. “Alone we can go faster, but together we can go further” said a wise man. And that is precisely what we did, by partnering on several fronts: wetlab, human practices, science education and communication.

How did we meet?

Just like most couples nowadays, we met on social media. We discussed together, presented to each other our projects for this year’s competition. We quickly realised that we needed to partner to take our respective projects to another level. We communicated via emails and our WhatsApp group.

Our first contact happened in May. We met again every month to prepare for all the projects we wanted to carry between wetlab work, communication and science education. You’ll find below everything we did together!

Our projects involving riboswitches for detection, we wanted to try something together. Since UParis_BME didn’t have satisfying enough results, Ionis Paris offered their help. It is interesting for them because they want to prove that their device can work with different reporter systems. After some zoom meetings, we met in person at UParis_BME’s lab at Campus Saint-Germain-des-Prés. We organised together the steps to follow in wetlab, and UParis_BME gave their samples to Ionis Paris, so they could carry the experiments in their own lab.

Ionis Paris wanted to assemble the different parts of the riboswitches of UParis_BME’s constructions by using the CPEC (Circular Polymerase Extension Cloning) strategy, because it is fast and easy. To do so, Ionis Paris, created the primers for the diverse PCR, and their overhangs. 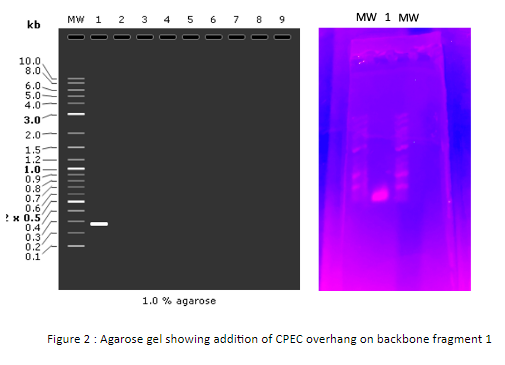 Results show that fragment 1, Ribo-Toe_miR141_3, is too amplified. The DNA concentration must be diluted for the next time. Sadly, Ionis Paris didn’t have the time to continue the construction.

Alongside all the French teams, Ionis Paris and UParis_BME actively participated in the organisation of this year’s French Meetup, which happened on September 11th. First contacts between the teams started in May, and several meetings between June and September followed in order to properly plan the meetup. The meetings were conducted with members from all the French teams, including Ionis Paris and UParis_BME, and some of them also involved iGEM ambassadors, who could share their opinion and advice regarding the Meetup’s purpose, activities, and general organization.

Each French team was involved in the general organisation, either in event communication, finding speakers or animating games. While Ionis Paris was involved in the communication of the meet up and animating synthetic biology workshops, UParis_BME was managing games and animations to entertain our guests (e.g. short quizzes before each team’s presentation and one big final quiz to end the French Meetup).

Our two teams also presented their respective projects. This was a great opportunity to train ourselves in scientific communication and prepare for Giant Jamboree presentations in front of numerous teams from all around the world. Ionis Paris presented how they wanted to develop their vitamin B12 blood test using synthetic biology. UParis_BME presented their advances in creating a new diagnostic technique by detecting cancer miRNAs. Our teams helped each other to improve their presentations and exchanged constructive feedback on their projects.

For both our teams, it was the first time that we co-organised such a great event and we learned a great deal from it, whether from the participating teams or the invited speakers. ( More info in Collaboration) 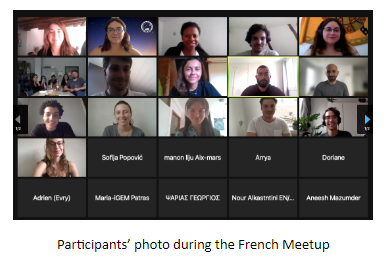 Every year, the Fête de la Science is organized all around the country by the French Ministry of Higher Education, Research and Innovation. It is a national science festival during which scientists, professors, educators, and students share with the public their passion and curiosity for sciences and innovation. This exchange happens through numerous workshops, games, conferences, and visits to laboratories, museums and industrial sites. It is aimed at audiences of all ages and backgrounds. This event is a great occasion to raise public awareness of science and its issues, promote the knowledge exchange between researchers and citizens, promote the work of the scientific community and to encourage young people to become scientists. In 2021, it is the 30th anniversary of Fête de la Science! 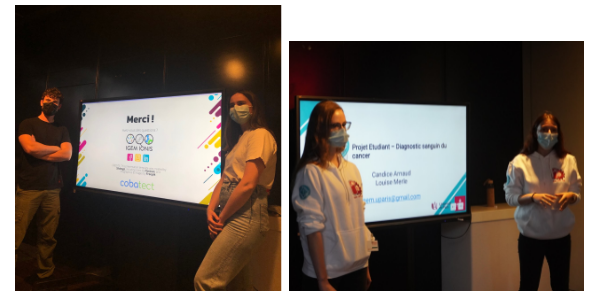 To prepare for this event our teams met several times. First online, then in person at the Cité des Sciences et de l’Industrie in Paris. Multiple meetings occurred during the summer between our teams to plan everything and deliver a successful event. For this event, with other Parisian teams, we decided to organize different activities to showcase synthetic biology and our respective projects. We planned on running DNA extraction workshops, synthetic biology presentations, and also fun activities around our projects with project presentations.

Ionis Paris presented their work and the impact of their project Cobatect while we presented our project ExoSwitch and the importance of early cancer screening. The teams ran the DNA extraction workshops, where young kids could learn about basic biology notions and have a taste of what synthetic biology can represent. We also played some card games with the people there so they could learn more about our projects and how we use synthetic biology. 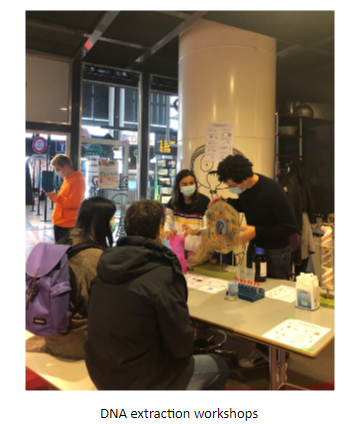 During this event, our teams worked together to provide educational scientific content to all generations and tried to inspire vocations in young people. It was really important for us to do this, as it closes the loop between our teams, the stakeholders and the targeted population. These days, we truly saw the impact our projects could have on the people, and seeing the young kids satisfied by our work was the best result we could get. more about communication

It has been a pleasure to work together this year on many important aspects of our respective projects. Throughout this process, we have learned a lot together and gained much needed experience for future projects and our professional and personal lives.

Our partnership with team ITU first began in May. They contacted us through Instagram, as they saw our project was about detecting vitamin B12, and theirs was about synthesizing vitamin B12. We first met on Zoom to speak about our project and how we could potentially collaborate. We had several Zoom meetings throughout the year, but maintained contact regularly through our WhatsApp group.

We first met on 14/05/2021. We both explained our project in detail. We thought about ways to collaborate through the lab part but also through social aspects. We brainstormed ideas but agreed to keep thinking about it individually and then organize another meeting once we would have more advances.

Our second meeting took place on 26/08/2021. This was the opportunity for both teams to speak about changes in our strategies and progress in different areas (lab, communication, human practices, etc.).

We talked more precisely about the parameters of our partnership. We decided that, as our systems were complementary, we could both check the validity of our work by sending our results to each other. Us Team Ionis could use our system to detect the vitamin B12 produced by Team ITU, double-checking both the specificity of our system and of their products. In turn, we thought about sending our plasmids to Team ITU, to see if our system could work properly in another lab in different conditions.

We also decided to share the surveys we both prepared to collect public opinion to collect data from different countries.

Our third meeting was held on 16/09/2021. In this meeting, we talked about shipment and the development of our projects. We also exchanged surveys to diffuse them on our social media. Team ITU also mentioned their plans for different parts of their Wiki, and we gave them feedback and suggestions. 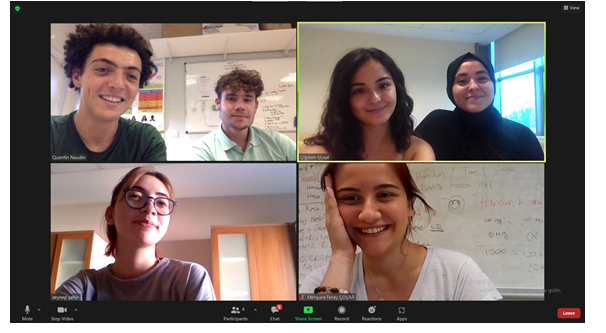 Our fourth and most recent meeting took place on 10/10/2021. In this meeting, we talked mostly about the problems we encountered to complete projects due to the COVID-19 pandemic and the problems with the shipping part. 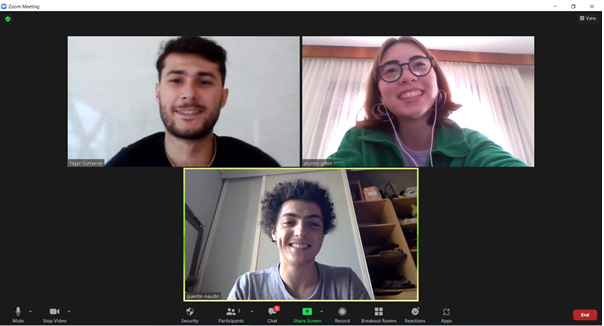 Because of the shipment issues, we were not able to share our samples to check the validity of our systems. We however decided to stay in contact to help each other with our wiki and presentation video.

In conclusion, we were in contact throughout the whole competition, and we discussed and helped each other in all parts : wet lab, human practices, deliverables, etc.