Due to Covid-19 restrictions, we had delayed lab access. We started our main lab work by the end of September 2021, when our ordered gene constructs arrived. So, we have only done the characterization of the Holin-Antiholin Kill Switch from the lab. Although we were successful in inserting other gene cassettes into E. Coli, we were unable to do its characterization and the cell line studies due to time limitations.

Preparation of Competent and & Ultracompetent E.Coli 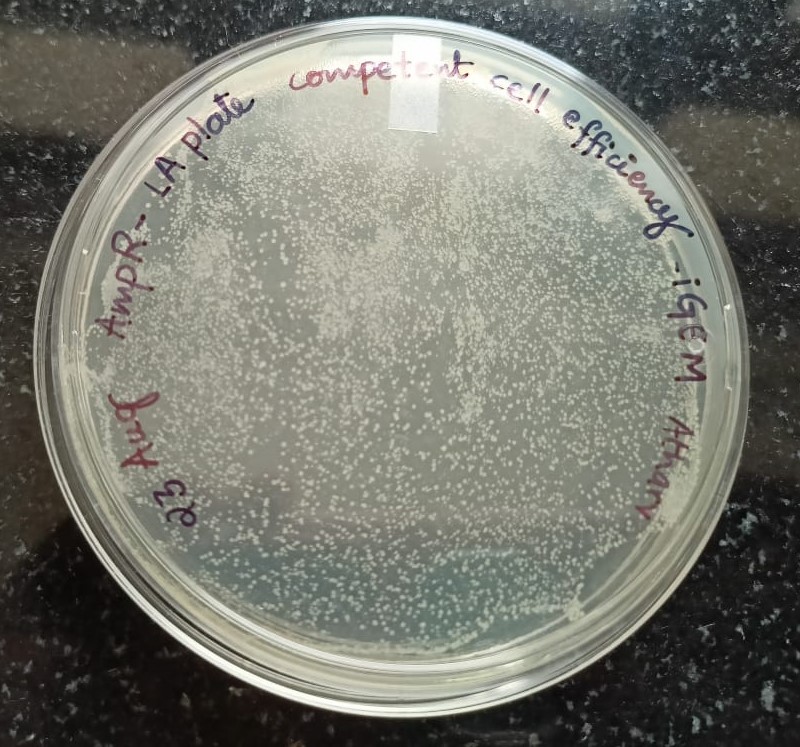 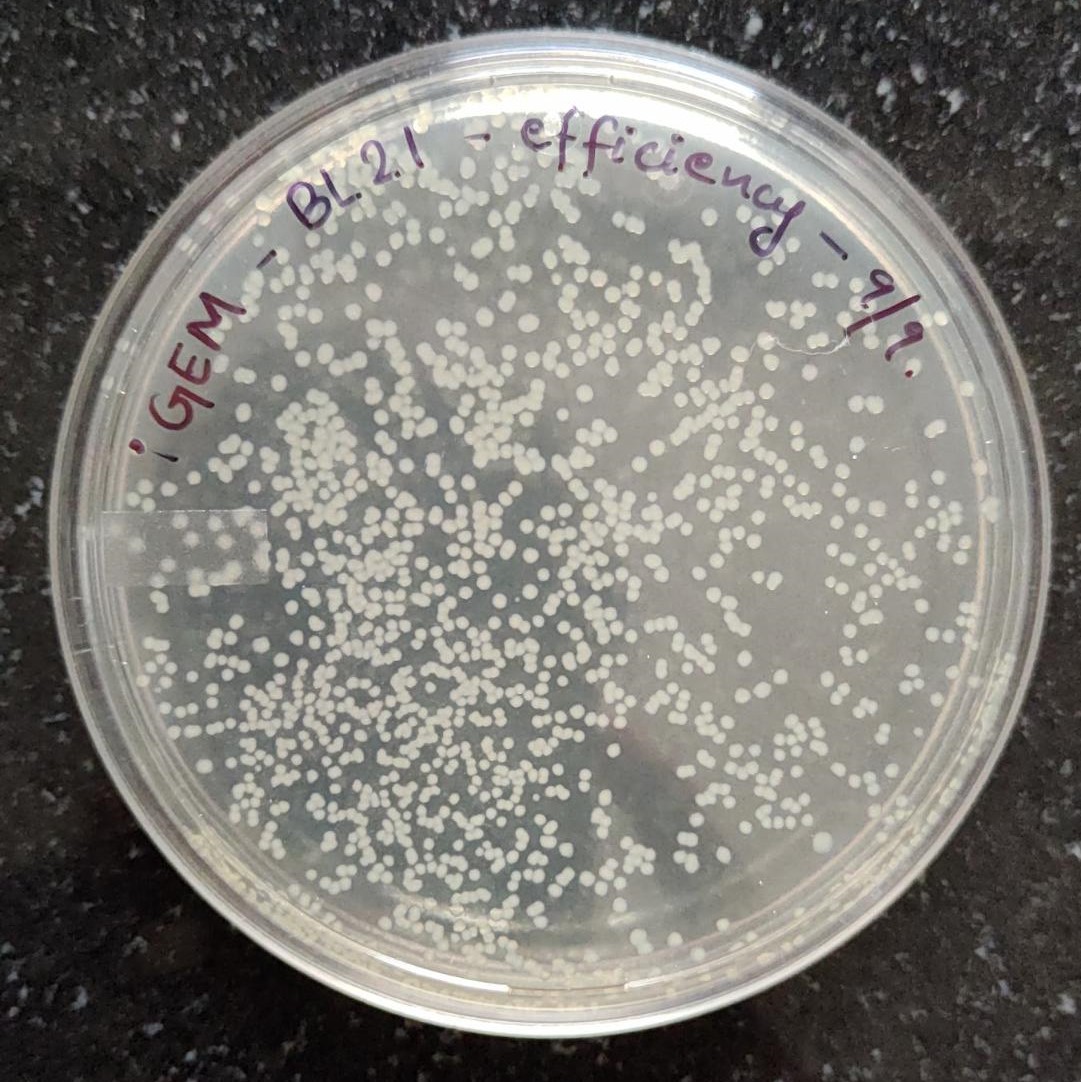 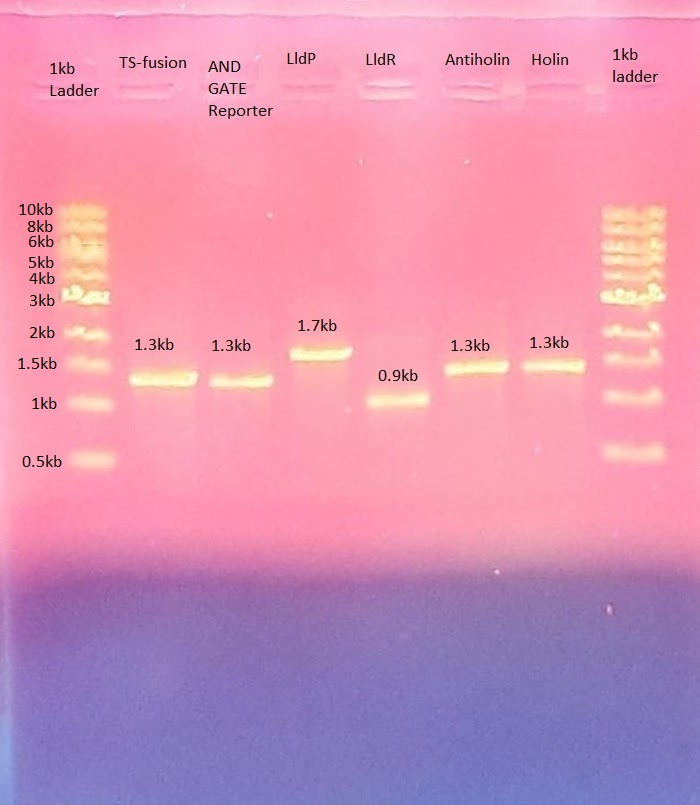 2) Restriction digestion of the Constructs 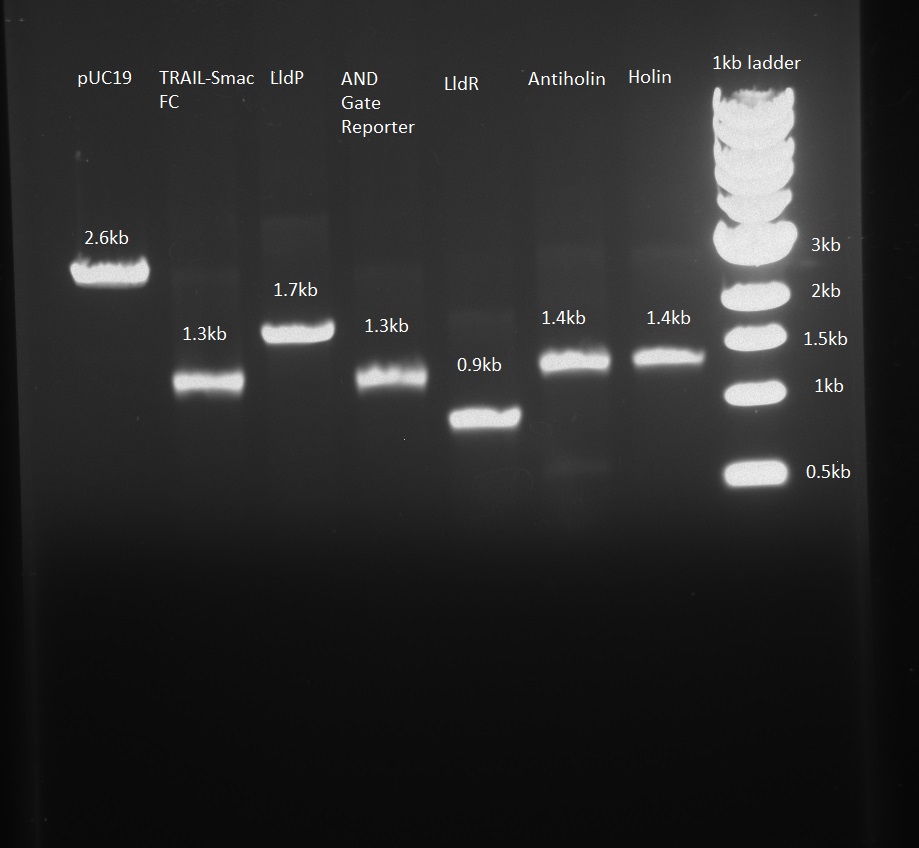 3) Ligation of each unit 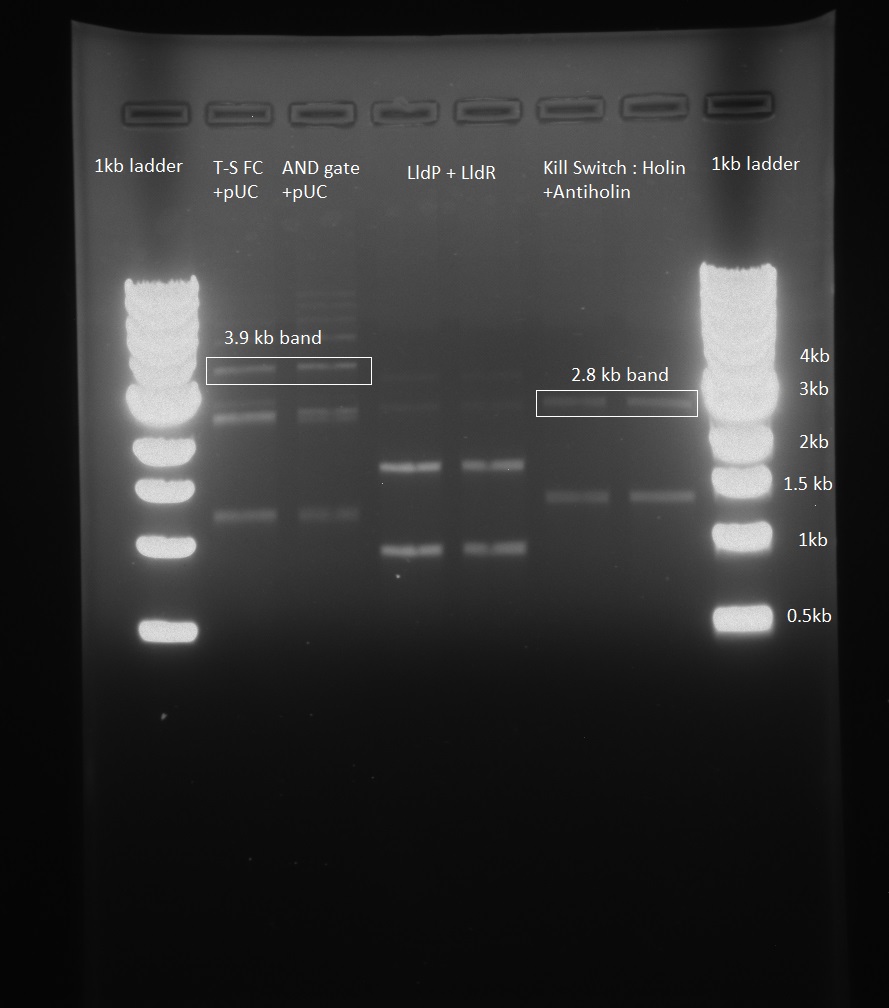 Ligation of TRAIL-Smac Fusion Protein+pUC, AND gate reporter +pUC and Kill Switch became successful. Ligation of LldP-R was not successful. 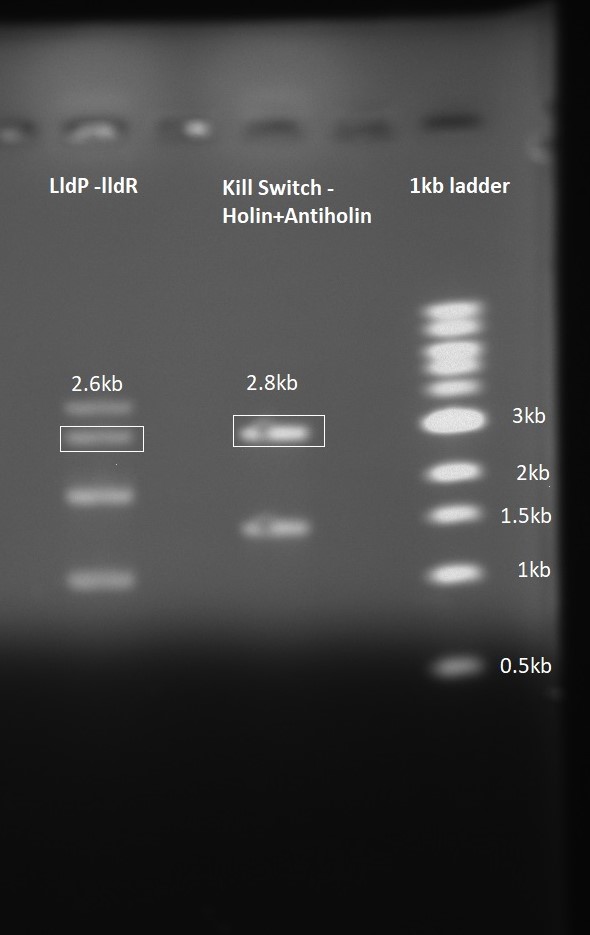 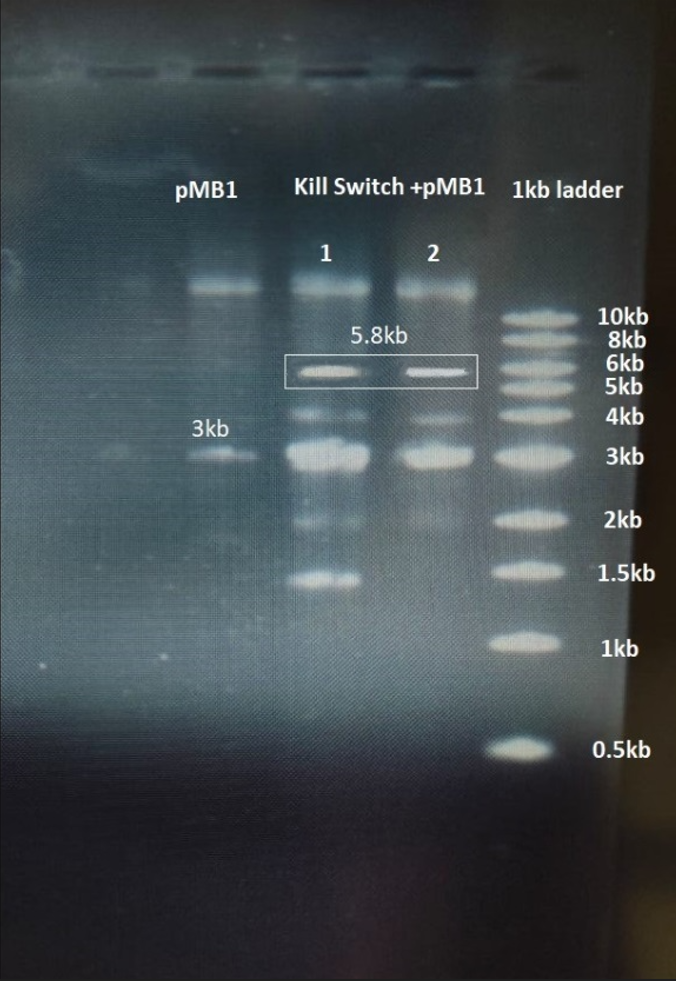 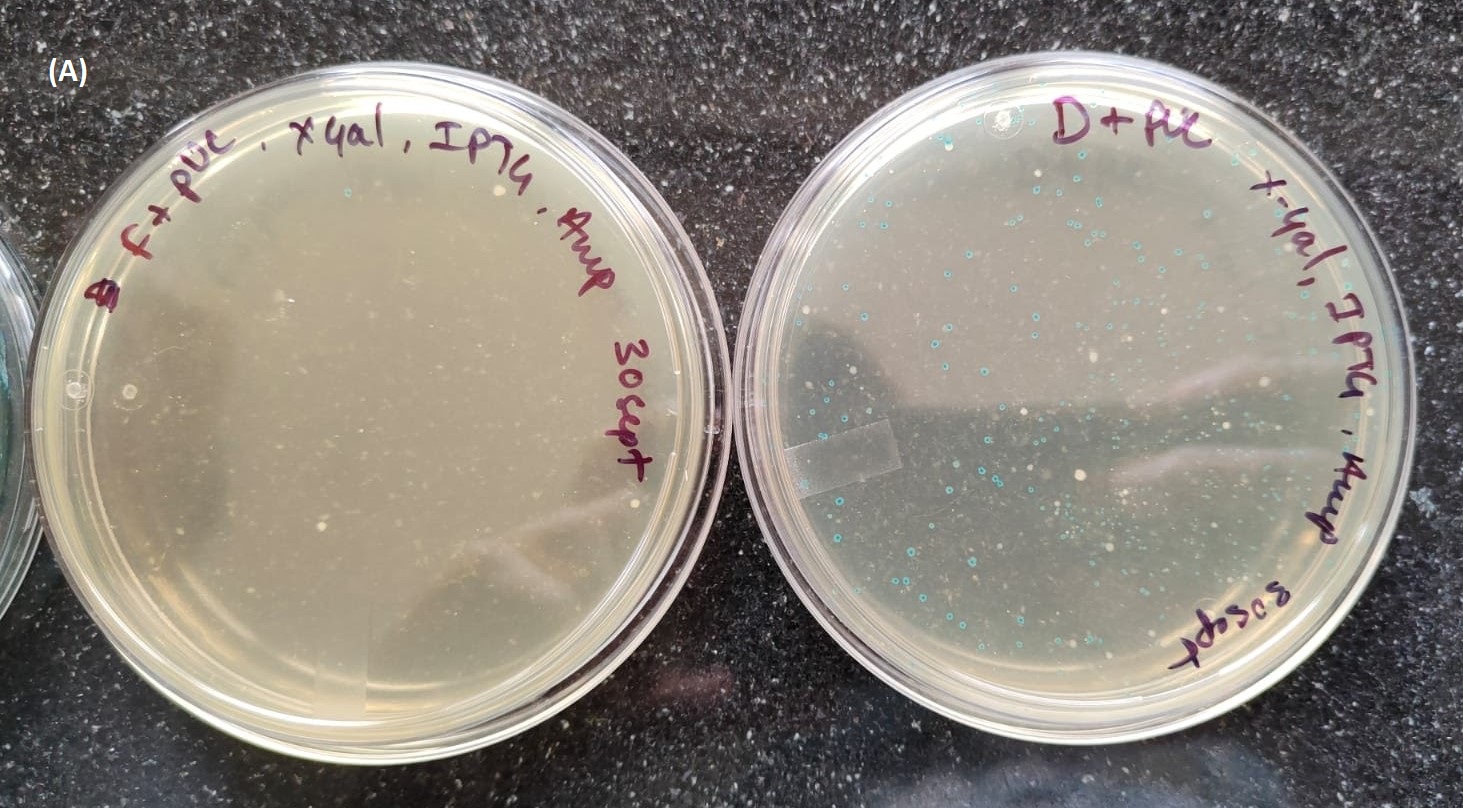 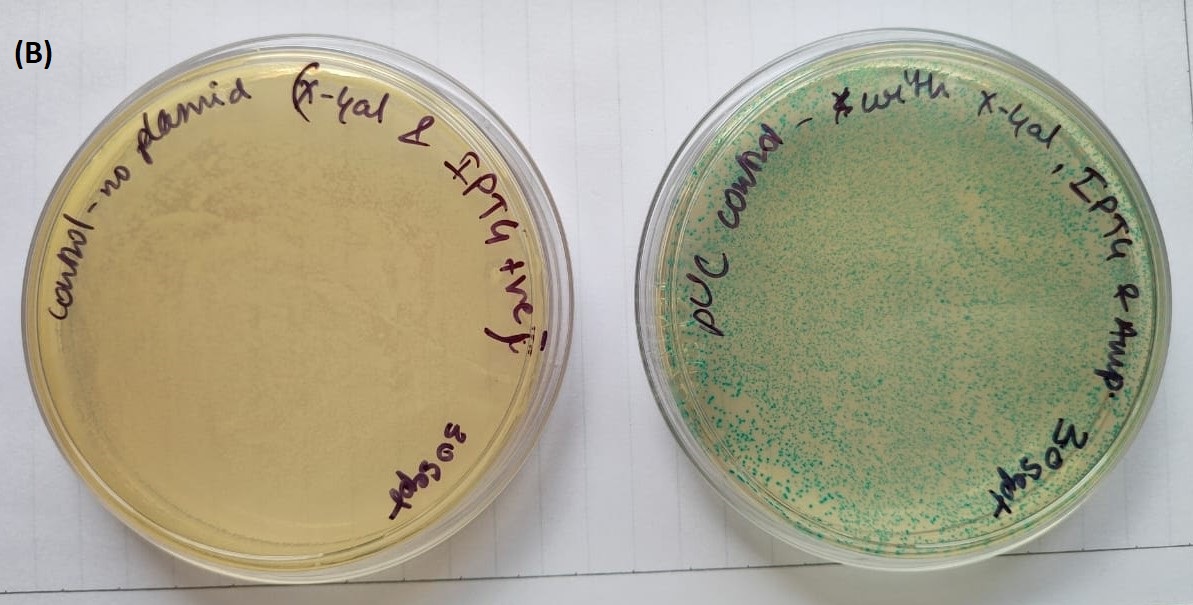 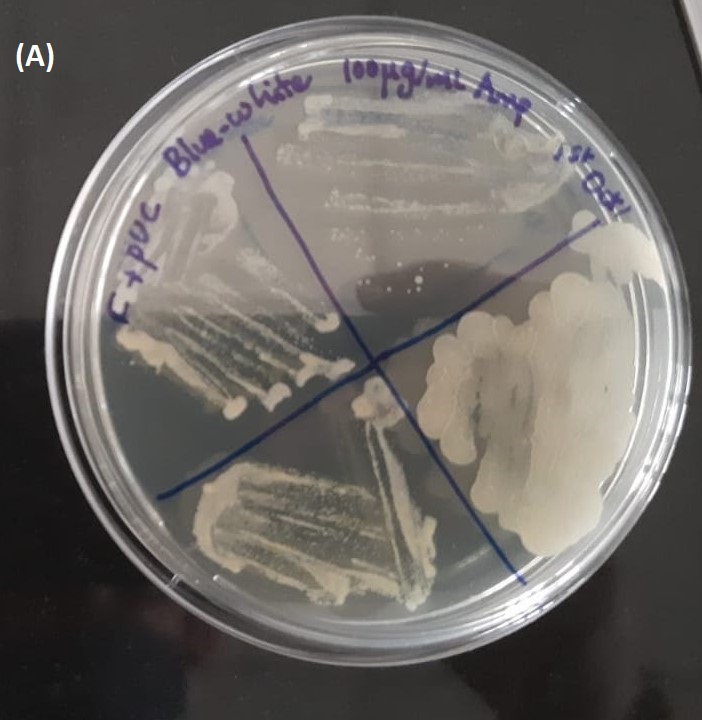 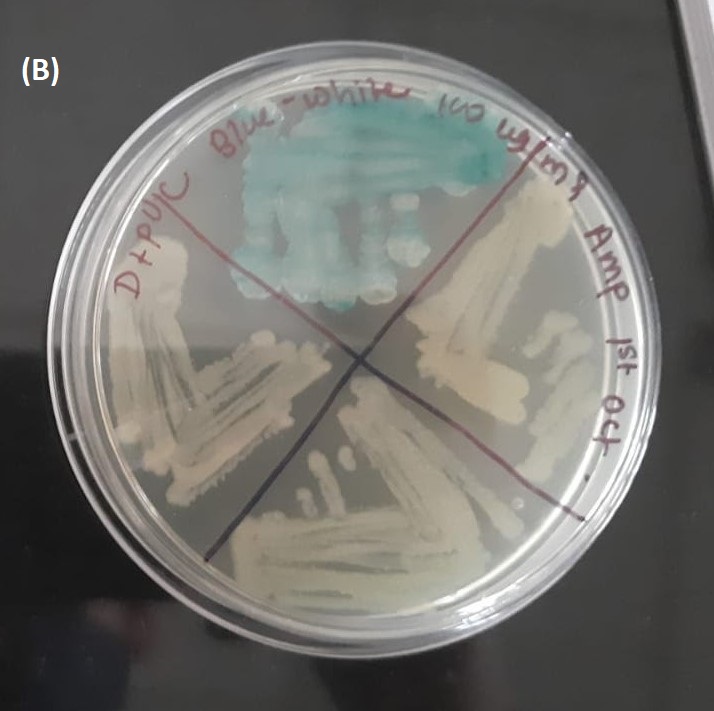 Our Kill Switch is controlled by Lactate. It will kill bacteria under low lactate conditions and allow growth only if lactate concentration is more than 10 mM. As most solid tumors have a lactate concentration of approximately 10- 40mM, our kill switch will enable bacteria to live in the tumor microenvironment while not allowing them to live in normal tissues (lactate 1.3 to 3 mM). We successfully ligated the Kill Switch Components (Holin-Endolysin & Antiholin -Lamba Repressor) into pMB1 Plasmid. 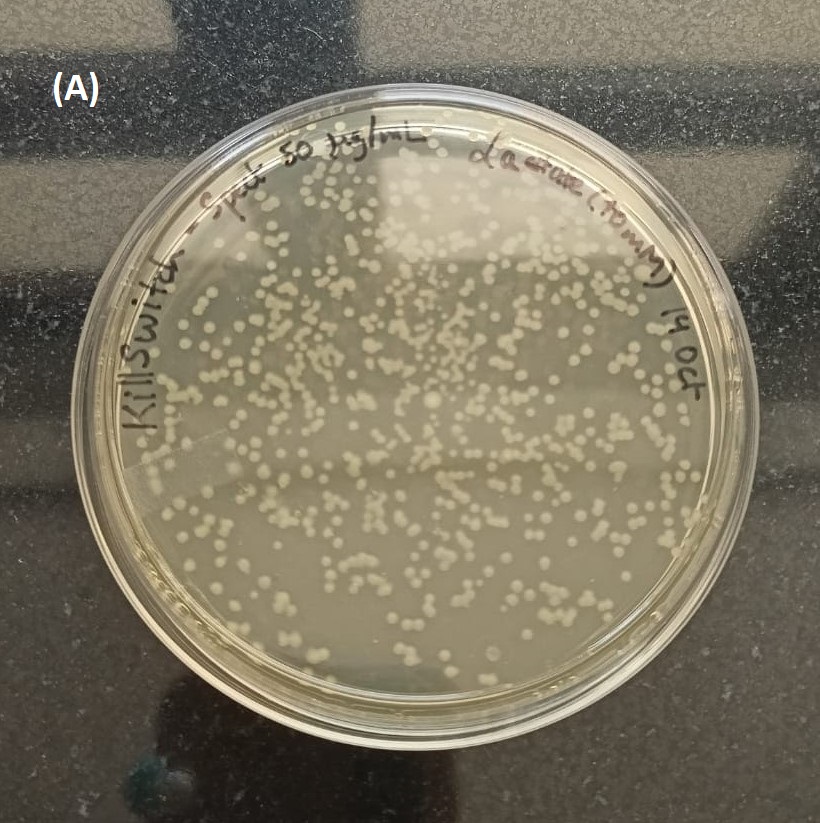 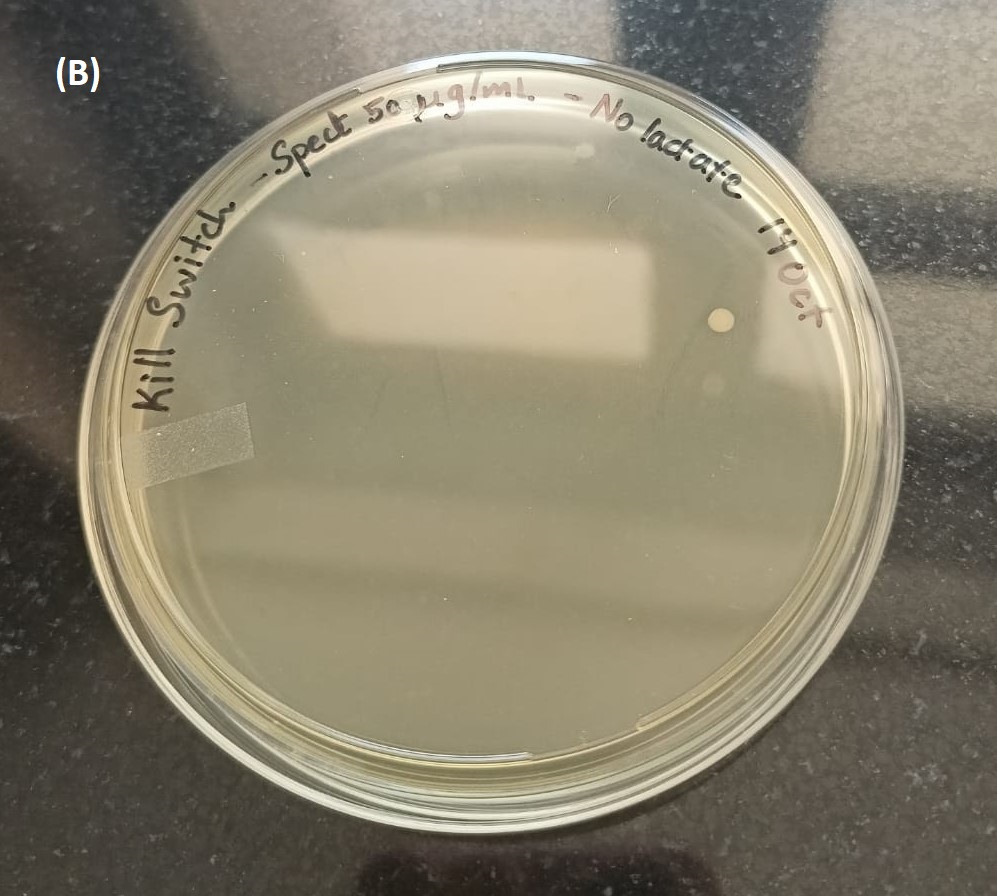 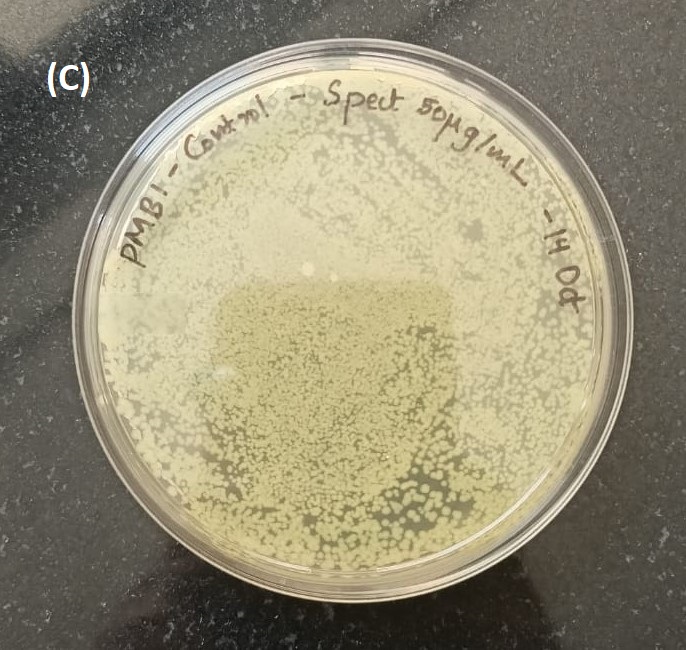 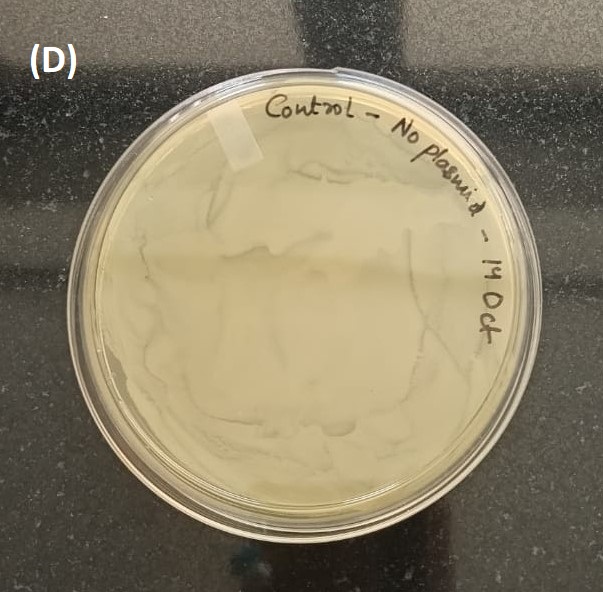 We could see a drastic difference in the growth of DH5-𝛂at 0mM Lactate and 40mM lactate plates. In 0mM lactate plates, the kill switch was operational, Holin and Endolysin were produced, killing the bacterium and preventing growth. Only one colony was observed in the 0mM lactate plate (could be an experimental error/ contamination). At 40mM concentrations of lactate, antiholin and lambda repressor were produced, which inhibited the holin and endolysin. Thus bacteria were able to survive and form many colonies. 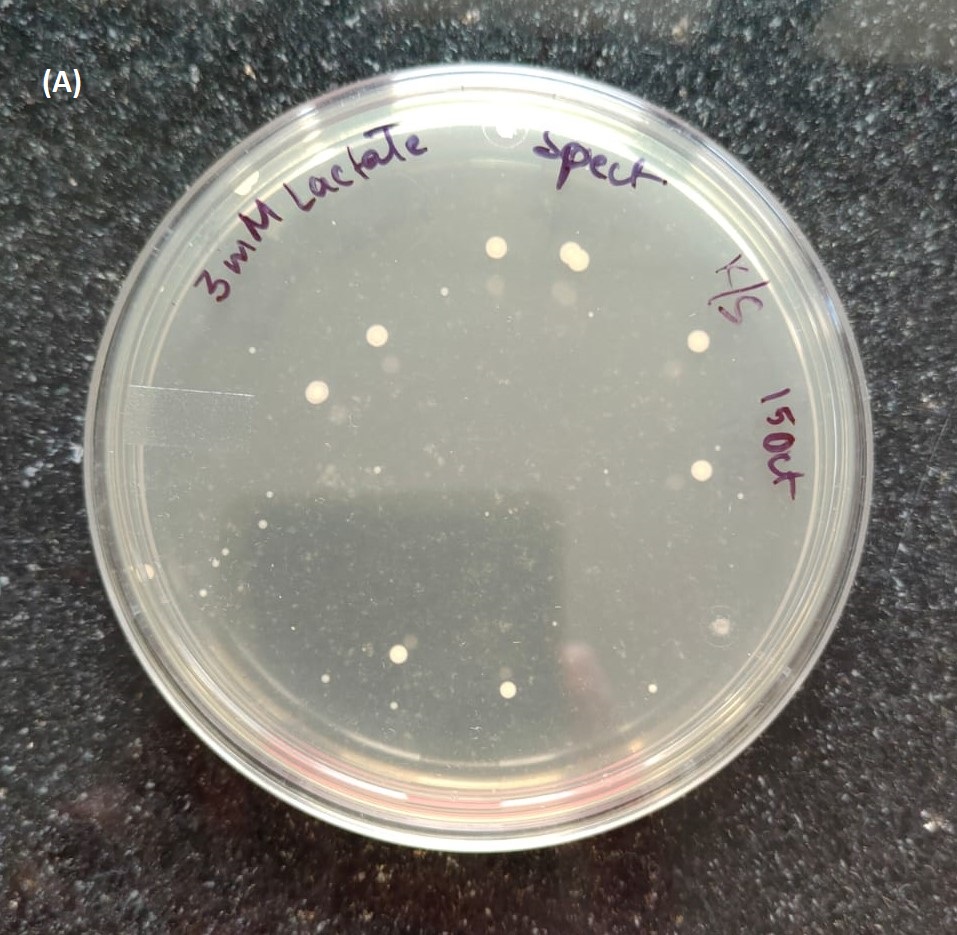 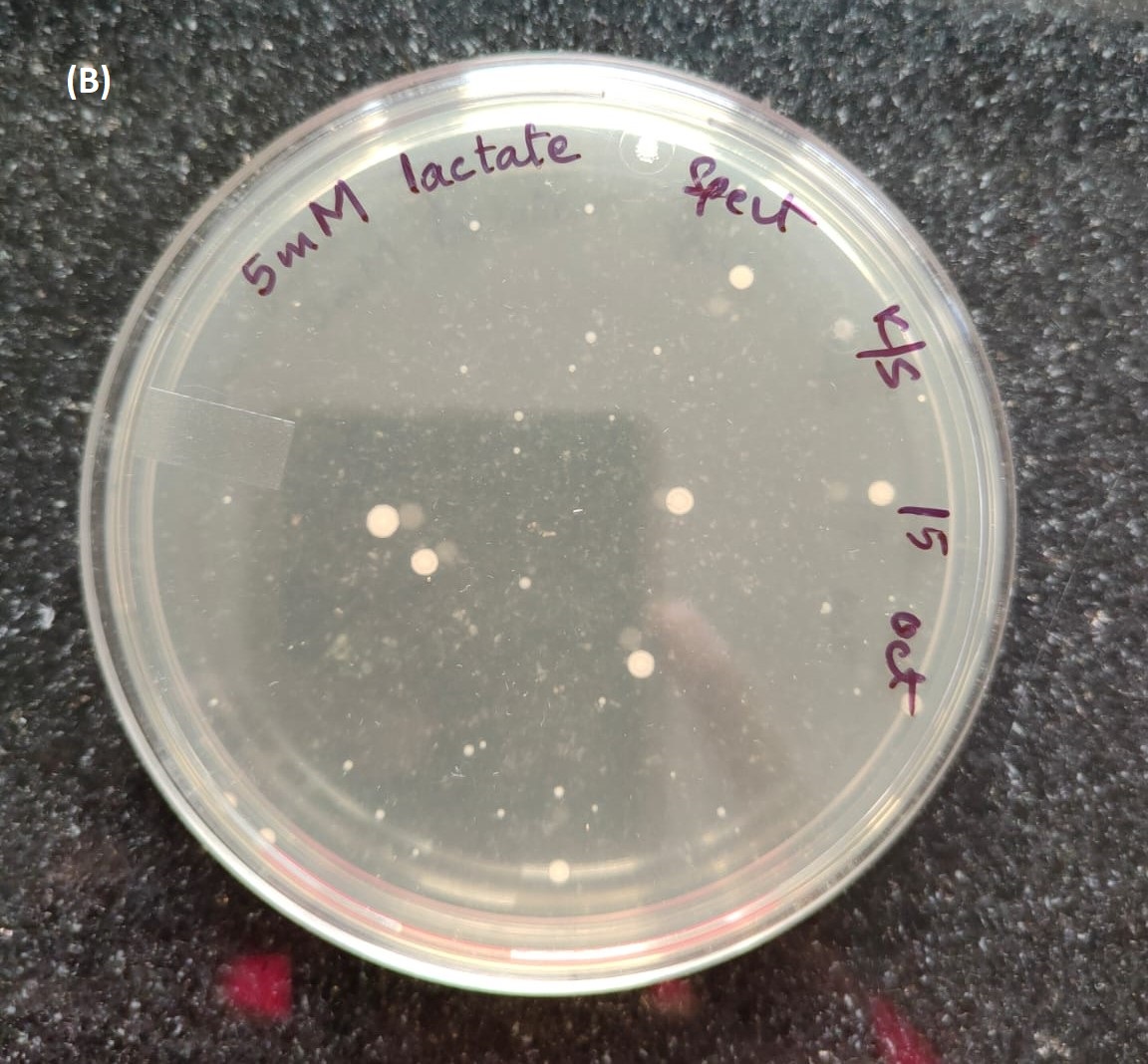 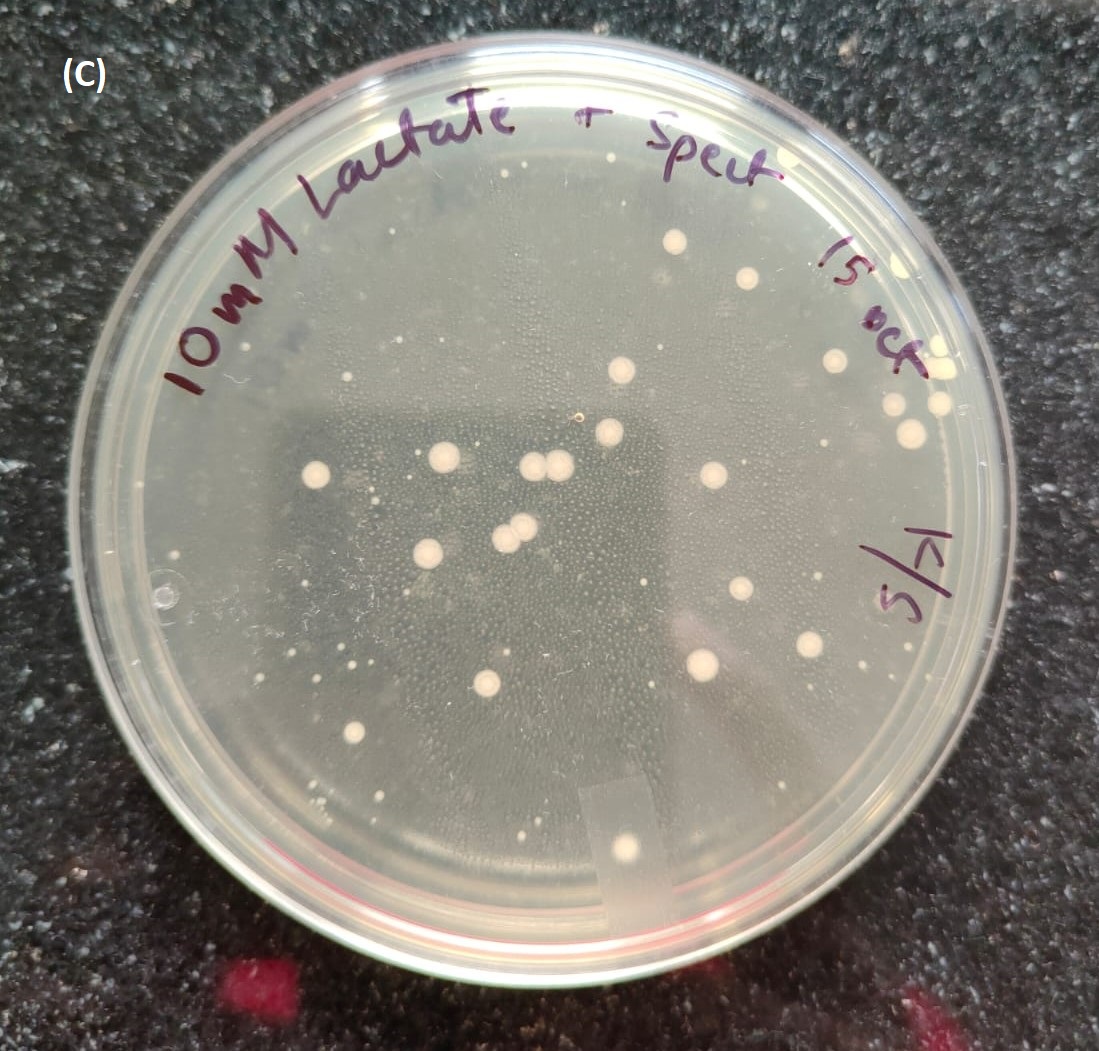 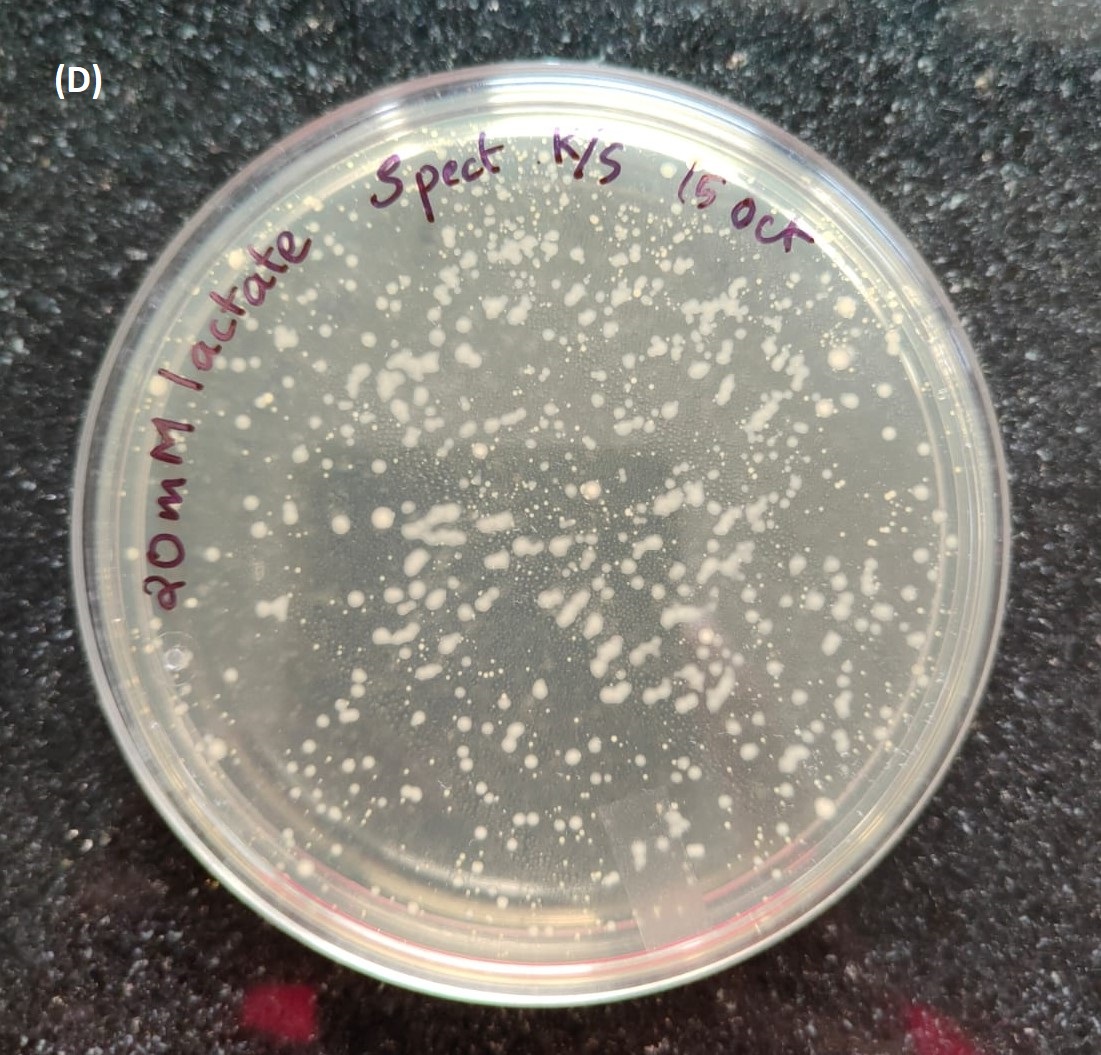 Small bacterial colony growth was observed in each plate, 3mM and 5mM lactate plates had fewer colonies, and 20 mM had a large number of colonies. We think there is a little bit of leakiness in the kill switch functioning. This leakiness could be the action of a lambda repressor, whose secretion is controlled by lactate. Lambda repressor will reduce Holin production by binding to the cL promoter. This allows us to deliver the bacteria via the intravenous route, as the lambda repressor will delay the action of the kill switch enough for bacteria to localize to the tumor region. But we could observe a considerable increase in the number of colonies at 20mM lactate. So our kill switch allows optimal bacterial growth from 10 to 40 mM lactate conditions, typically observed in solid tumors.

CFU per ml = (No. of colonies * Total dilution factor)/Vol. of culture plated in mL 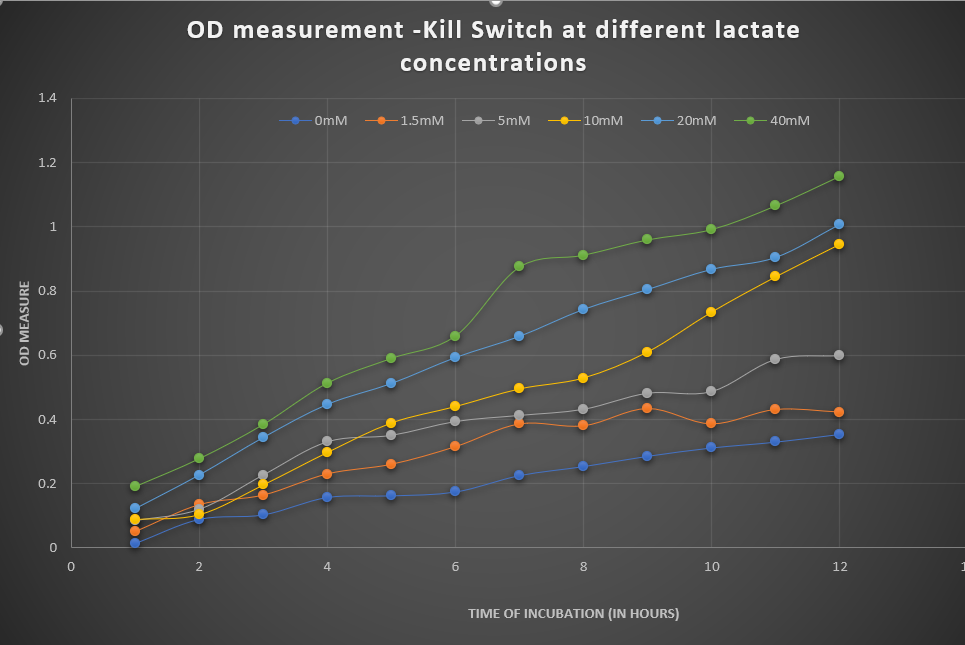 To get a holistic view of our project, we did a combination of mathematical, structural and simulation modelling. Here we compile our results from the various models and the questions that motivated us to build them.

The rate of internalisation of Smac(n7)-R8 in the cancer cells plays an important role in inducing apoptosis. We used COPASI to build a mathematical model using Michaelis-Menten kinetics.

Due to delayed access to the wet lab, we wanted to check the internalization of the Smac-CPP (Cell-Penetrating Peptide) construct through the lipid bilayer. For this, we decided to run molecular dynamics simulations using GROMACS and CHARMM force fields on a high performance computing cluster.

This is a mathematical model made using COPASI that deals with the TRAIL-apoptosis machinery after fusion TRAIL binds with the death receptors present in the plasma membrane. This model shows an increase in the concentration of activated caspase3 after activation of death receptors.

A major question that we came across while designing our kill switch is the time it takes to get activated in the absence of lactate. For this, we mathematically modelled our system using COPASI and found that the system has a time delay of 20 minutes (considered as an underestimation).

The more about the same can be found on our Modelling page.