We have used mathematical, structural and simulation modelling to explain the various functional aspects of the project. We have developed five models for processes like protein-cell internalisation, TRAIL-induced apoptosis machinery (the caspase cascade) and our novel holin-antiholin killswitch with time-delay.

After the fusion peptide cleaves by metalloprotease, the part containing R8-Smac(n7) internalises the cancer cell to inhibit XIAP. The rate of internalisation of this protein plays an essential role in the apoptosis of the cancer cell. The rate of uptake determines how effectively the fusion peptide population can inhibit the XIAPs. In other words, if the protein internalises quickly and enters the cell in large quantities, the protein can bind with more XIAPs and stop them from inhibiting the caspase-cascade reaction.

We have made a deterministic model using Michaelis Menten kinetics. We have assumed the protein R8-Smac(n7) present outside the cell forms an enzyme-substrate complex with the cell membrane. The complex then dissociates to give internalised R8-Smac(n7).
The pathway for this process can written as
R8-Smac(n7)outside + CM ⇋ R8-Smac(n7)-CM → R8-Smac(n7)inside + CM
Here the reactants are, 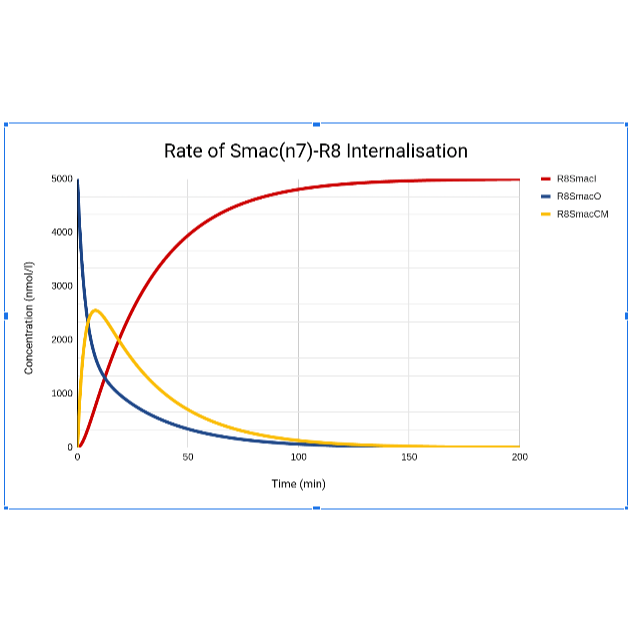 After the fusion protein gets cleaved by metalloproteases into R8-Smac(n7) and fusion TRAIL, the R8-Smac(n7) fusion peptide must internalise inside the cancer cell’s cytoplasm. The fusion peptide contains a CPP (cell-penetrating peptide), polyarginine having eight residues in our case, to assist Smac(n7)’s entry into the cell. Due to delayed wet lab access, we did molecular dynamics simulations to study the interaction of R8-Smac(n7) and Smac(n7) and the plasma membrane of a cancer cell.

We first tried to predict the structure of R8-Smac(n7) and Smac(n7) using a python library modeller. We ran a 1μs MD simulation to see how the protein folds in the presence of water molecules and ions and found that the protein takes the shape of a simple coil. 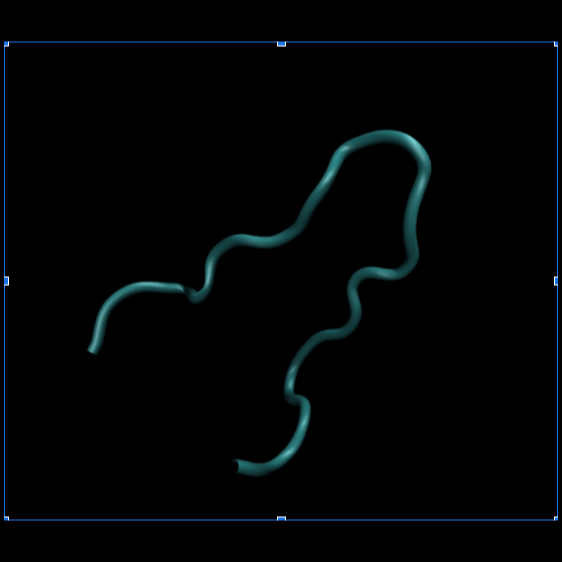 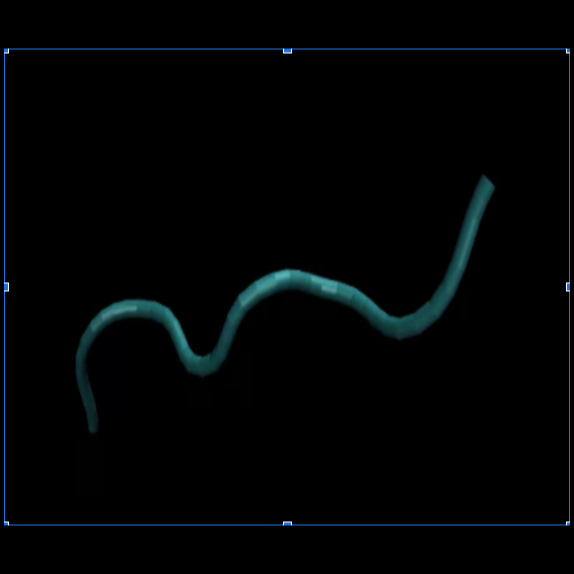 Our next step was to set up a lipid bilayer and protein system for the simulation. We used Martini Bilayer Maker to set up a coarse-grain simulation since we couldn’t afford all-atom simulations due to the delayed access to resources. We used GROMACS and CHARMM force fields for energy minimization, equilibration and production run. Prior to full simulation, we are using steered MD simulations (SMD) to obtain windows in the reaction coordinates that can be used for umbrella sampling. This step is still in progress. Initially, we set up the system using 120 lipids on each bilayer leaflet consisting of the lipids mentioned above in appropriate ratios. We introduced polar water molecules and ions on either side of the lipid bilayer. The following figure shows the setup for the coarse-grain simulations. We placed the protein around 45-50 Å from the centre of the lipid bilayer and gave different orientations to keep the results unbiased. Our first step was to check the interaction of the fusion peptide with the lipid bilayer. We ran simulations for both R8-Smac(n7) and only Smac(n7). 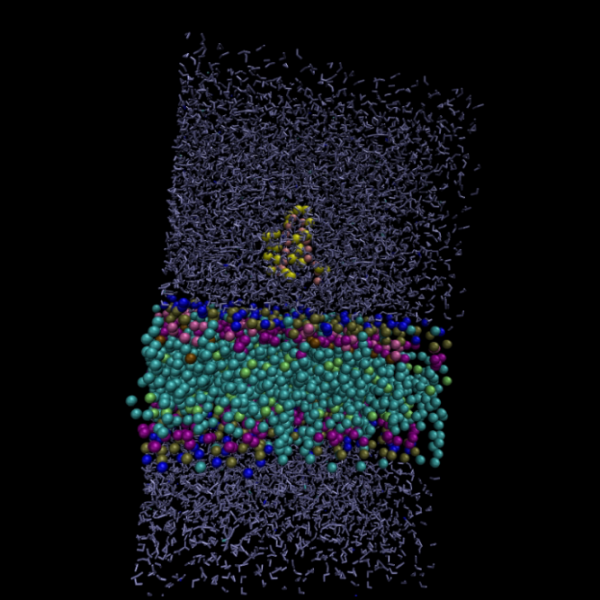 Color code for the above image: Due to time constraints, we could only simulate the initial interaction of R8-Smac(n7) and Smac(n7) with the lipid bilayer. The delayed access to the computational resources, umbrella sampling of protein-lipid bilayer translocation simulations is still in progress.

The tumour necrosis factor-related apoptosis-inducing ligand (TRAIL) is regarded as a potential anticancer agent, especially for highly malignant tumours. Some cancer cells are resistant to apoptosis induced by TRAIL. Thus we are building these mathematical models to understand the rate of production of caspases due to TRAIL receptor activation to ensure apoptosis takes place due to the activation.

Tumour necrosis factor-related apoptosis-inducing ligand (TRAIL) is a member of the TNF superfamily and has shown strong antitumor activity in a wide range of cancer cell types with minimal cytotoxicity to most normal cells and tissues. The tumour necrosis factor (TNF) superfamily consists of proteins involved in proliferation, differentiation, and apoptosis. TRAIL binds to several distinct receptors: (a) TRAIL-R1 (DR4/APO-2 A), (b) TRAIL-R2 (DR5/TRICK/Killer), TRAIL-R3 (DcR1/TRID/LIT) and similarly others bind to different receptors. Initially, the TRAIL ligand binds to its two death receptors DR4 (TRAIL-R1) and DR5 (TRAIL-R2). Death receptor cytoplasmic sequences contain a shared 80-amino acid death domain that, upon ligand binding, associates with a similar domain found in adaptor proteins such as FAS-associating protein with death domain (FADD) and TNF-related associated death domain (TRADD). FADD promotes the formation of a death-inducing signalling complex, DISC, which then binds to cysteine proteases (caspases) that cleave specific proteins. The two caspases predominantly bound to these adaptor molecules are caspase 8 and caspase 10. Caspase-8 or caspase 10 activation initiates a cascade where other caspases, including caspase-3, are activated, ultimately resulting in an irreversible commitment of cells to undergo apoptosis.
The two pathways are: 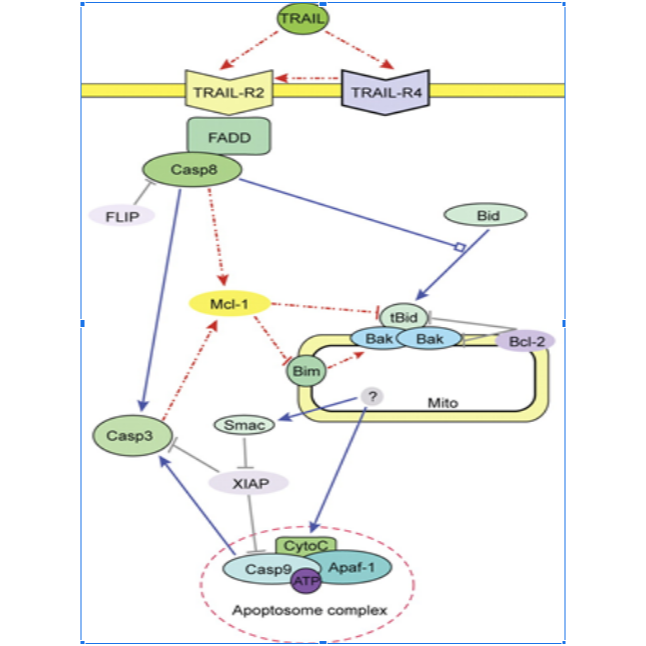 Death receptor (type I) and mitochondrion (type II) pathways of apoptosis constitute the basic structure of the interaction network in our schematic representation. To be simple, caspase-8 and -10 are represented in one molecule in our model because of their redundant function, so are Bcl-2/ Bcl-XL, caspase-3/7, IAPs, and Bax/Bak.
This model is helpful for showing that for a cancer cell, given some amount of TRAIL activation, the model can predict the amount of caspase 3 produced, which can tell the certainty of apoptosis. 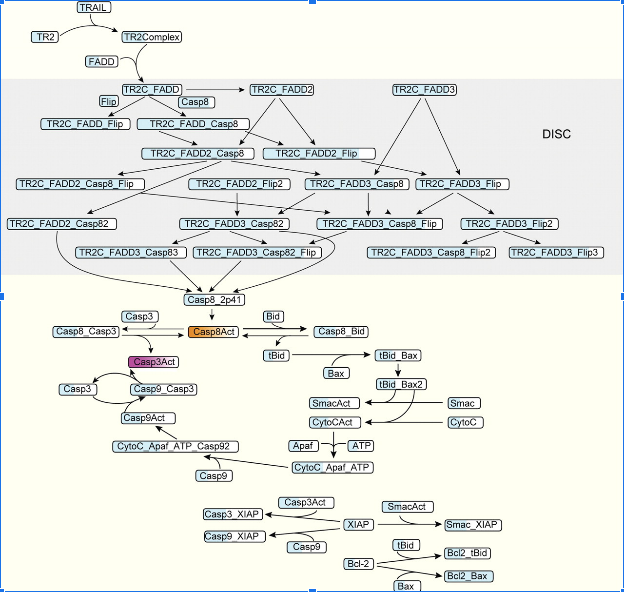 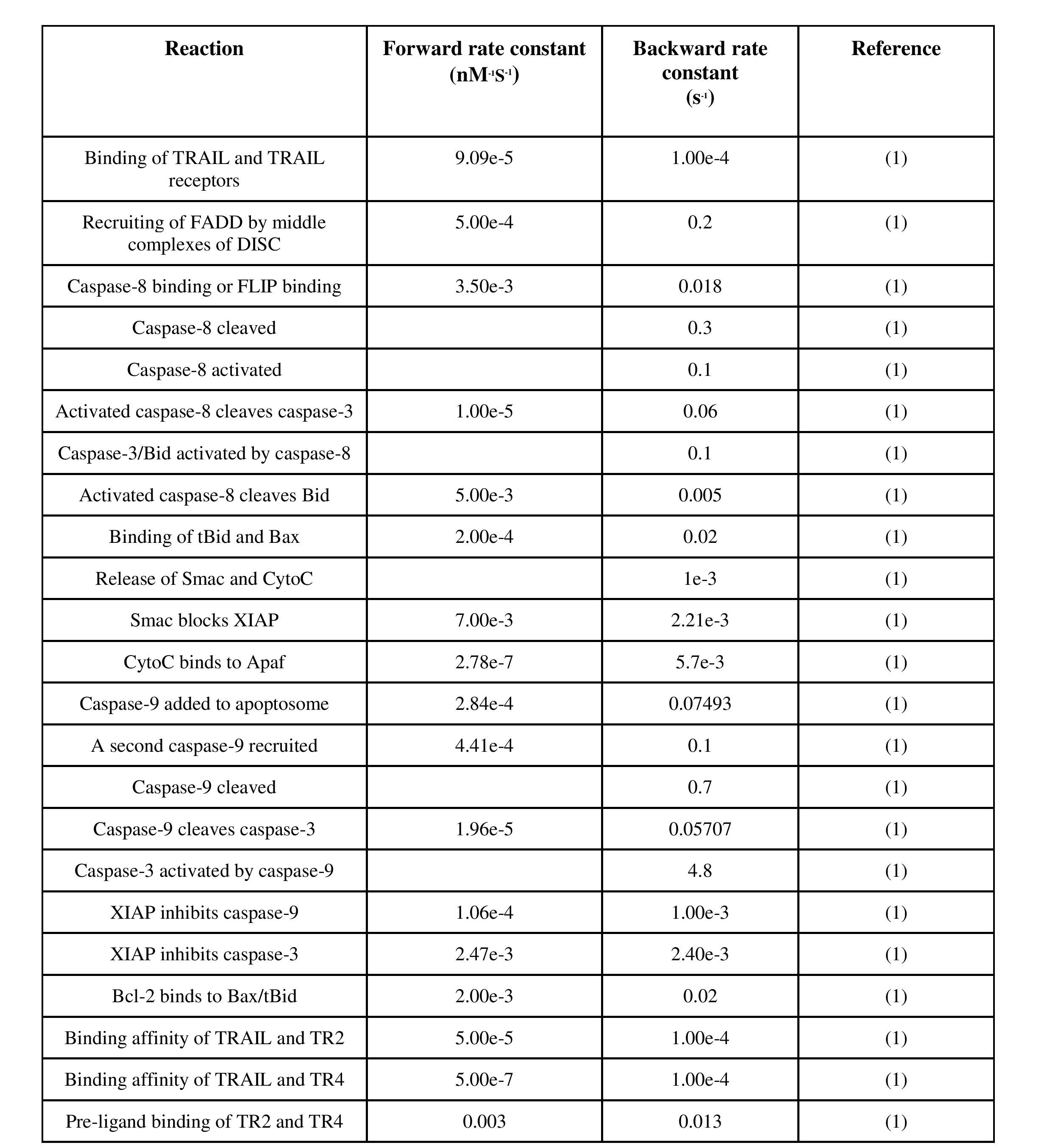 We used COPASI to form the ODEs and solve them. We also augmented the Smac(n7)-R8internalisation kinetics model with this model and plotted graphs.

As a part of biosafety, we designed a holin-antiholin kill switch that gets activated at low lactate concentrations. When the bacteria are injected into the body, they need to reach the tumour microenvironment and release TRAIL and Smac. Tumour microenvironments have a lactate concentration of 10-30 mM. To prevent the bacteria from releasing TRAIL and Smac in a non-tumour microenvironment we designed a gene cassette containing the bacteriophage derived lambda repressor (cI) fused to an LVA tag under the control of a lactate inducible promoter. In the presence of lactate antiholin and the lambda repressor will be expressed. The lambda repressor represses the expression of holin and endolysin through the lambda repressible promoter. In the absence of lactate, the kill switch needs to be activated. The lambda repressor gets degraded as it is LVA tagged. This activates the expression of holin and endolysin. The holin that is initially made is neutralized by the already present antiholin. Meanwhile, endolysin is building up in the cytosol. Once the holin overwhelms antiholin, holin starts to form holes in the membrane and the endolysin already present in the cytosol lyses the cell wall, effectively killing the cell. While designing our project, a major question we came up with was the time delay of kill switch activation in the absence of lactate/ low concentrations of lactate (non-tumour microenvironment). The bacteria must have enough time to circulate and localize (in case of the presence of multiple tumour sites) before it gets killed. Hence, we decided to model our kill switch and investigate the time delay as a checkpoint before we started our wet-lab experiments. 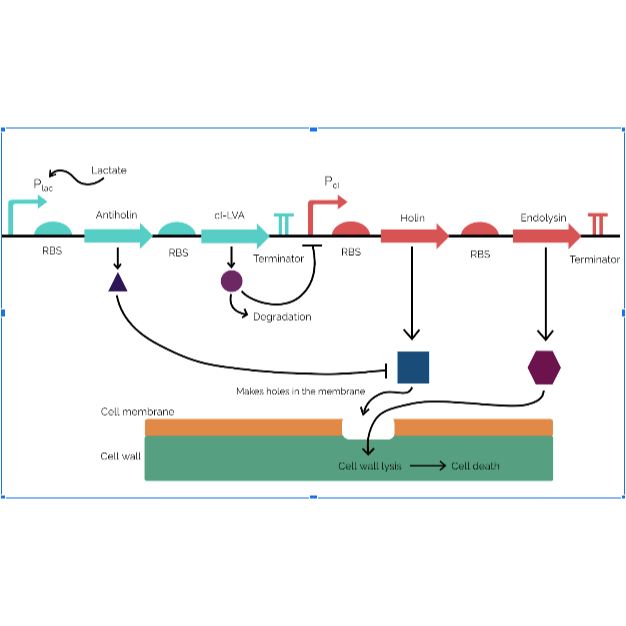 The pathways and parameters involved in the working of the kill switch were input into COPASI (http://copasi.org) to obtain the ODEs. 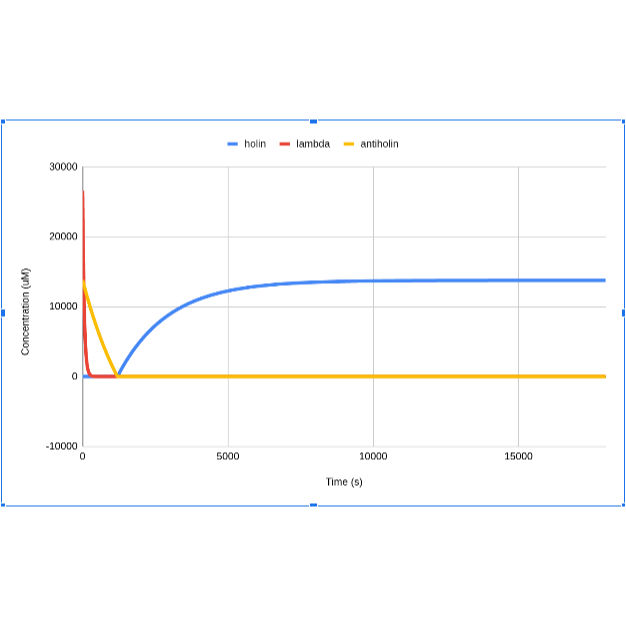 The modelled time delay of 20 minutes can be considered as an underestimation. This is mainly dueto the possibility of disparity in rates and expression data. The time delay in an actual biological context may vary. Since the time taken for one complete circulation is 1 minute, we can say that our modelled kill switch has a high chance of working effectively in a biological context.

We successfully ligated the Kill Switch Components (Holin-Endolysin and Antiholin-Lamba Repressor) into pMB1 Plasmid. Then DH5-𝛂 cells were transformed with this Kill Switch-pMB1 plasmid. 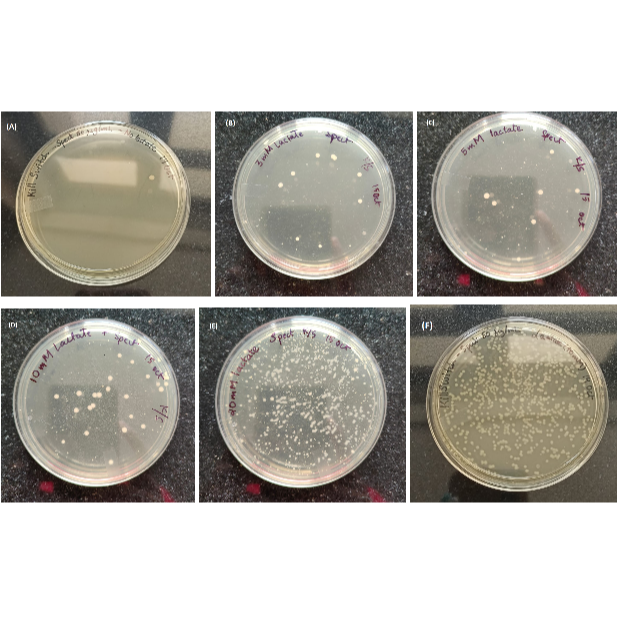 Observation and Interpretation of Result:

In 0mM lactate plates, the kill switch was operational, Holin and Endolysin were produced, killing the bacteria and preventing growth. Only one colony was observed in the 0mM lactate plate (could be an experimental error/ contamination). 3mM and 5mM lactate plates had fewer colonies, and 20 mM, 40mM lactate plates had a large number of colonies. At these lactate concentrations, antiholin and lambda repressor were produced, which inhibited the holin and endolysin. Thus bacteria were able to survive and form many colonies. There is a little bit of leakiness/ delay in the kill switch functioning. This could be the action of the lambda repressor, whose secretion is controlled by lactate. Lambda repressor will reduce Holin production by binding to the cL promoter. This allows us to deliver the bacteria via the intravenous route, as the lambda repressor will delay the action of the kill switch long enough for bacteria to localize to the tumor region. So our kill switch allows optimal bacterial growth from 10 to 40 mM lactate conditions, typically observed in solid tumors.
CFU/mL = (No. of colonies * Total dilution factor)/Vol. of culture plated in mL
Dilution Factor = 2
Volume of culture plated in mL = 0.1 mL 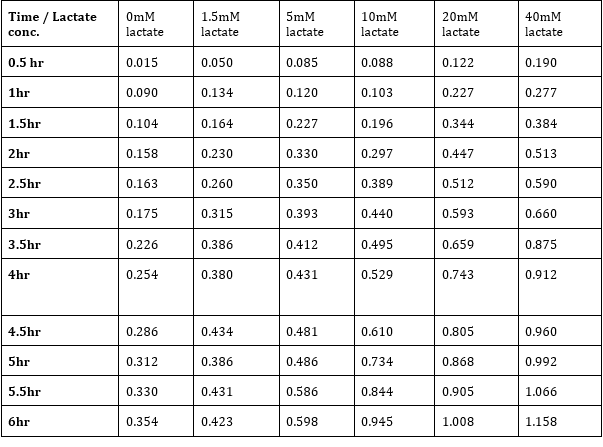 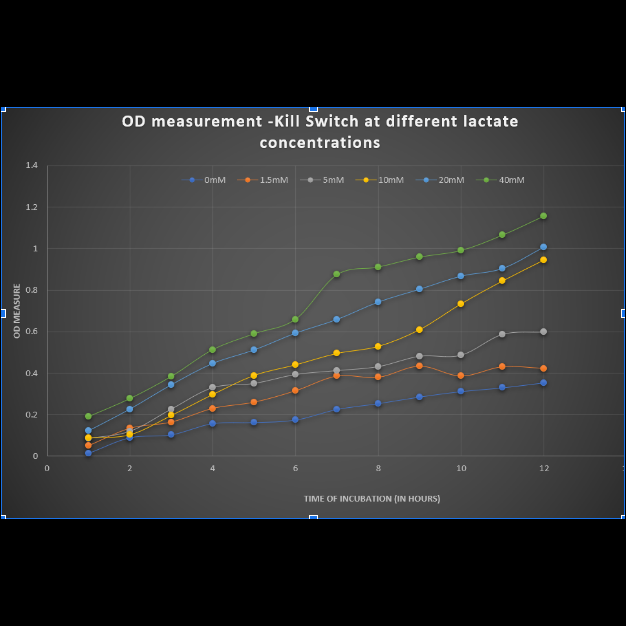 In our project, we have constructed a polyprotein sequence that gets cleaved by enzymes specifically present in cancer cells. Hence, it is ideal to check that the cleaved and linker residues do not impact the structure of TRAIL and that the functional domains remain intact. For this, we structurally modelled both the native and fusion (after cleavage) TRAIL constructs.

Protein folding is the process by which a linear amino acid sequence/ polypeptide folds into a three-dimensional structure and adopts its low energy native conformation. The three-dimensional structure is a combination of various secondary structures (alpha helices, beta sheets, random coils). The backbone and side-chain interactions propel the protein to fold into its native conformation. 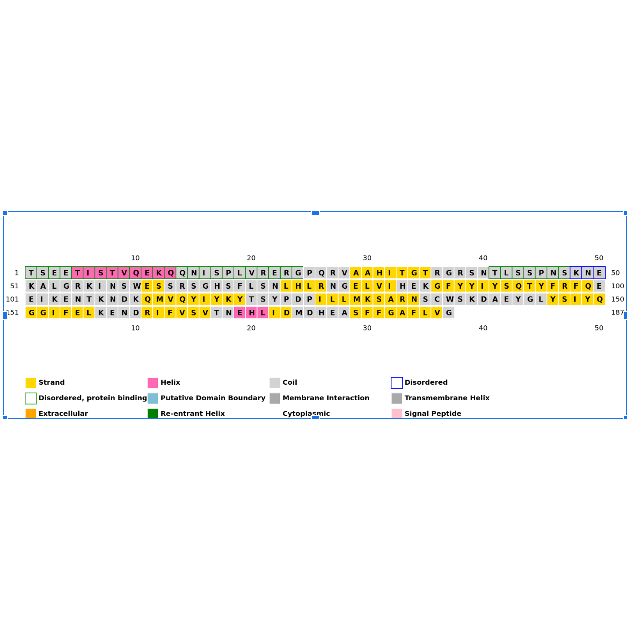 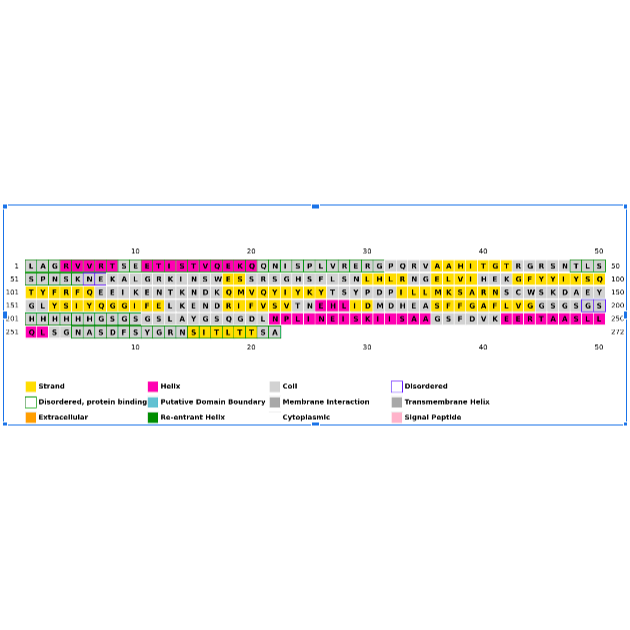 Results from the I-TASSER online server

The I-TASSER server provides the 5 best-predicted models. The confidence of each model is measured by the C-score that lies in the interval [-5, 2]. A higher C-score indicates a model predicted with higher confidence. Both native TRAIL and fusion TRAIL structures were predicted using I-TASSER.
Shown below is the tertiary structure of native TRAIL as predicted by I-TASSER with C = - 0.56 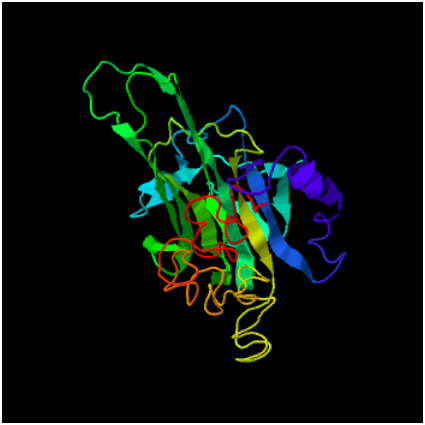 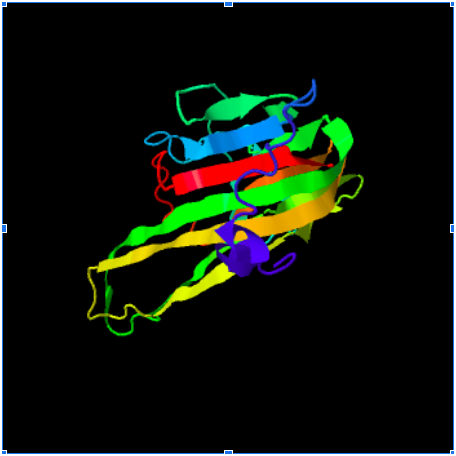 The alignments of fusion TRAIL from I-TASSER results were made using PyMOL with the crystal structure available on PDB to analyze if the structure deviated significantly due to the linker and cleaved residues. The RMSD value was obtained under acceptable limits. The beta-sheets aligned quite well while the rest of the protein being random coils did not align as expected. 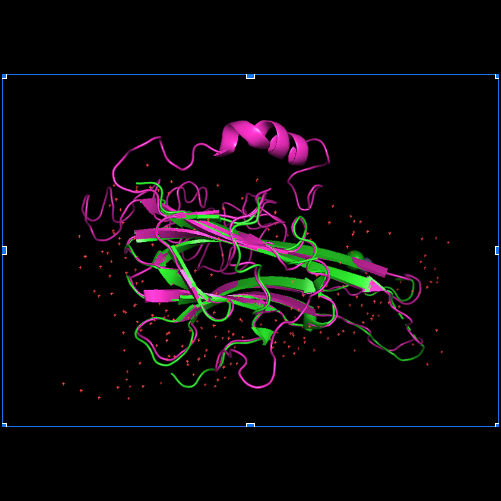 From our structural model, we can quite clearly see that the structures of native and fusion TRAIL are quite similar. Hence, there is a high chance that the active and functionally relevant domains in our fusion construct TRAIL will remain the same as that of native TRAIL. The low RMSD values and significantly high confidence values reinforce the idea that the structure and thereby the function remains similar.