A schematic diagram is shown below to illustrate the flow of this experiment:

E. coli strains arcA-knockout (arcA-) and iclR-knockout (iclR-), and their mother strain K-12 BW25113 (WT) are ordered from the National Institute of Genetics, as a part of the National BioResource Project (NIG, Japan). The Keio collection is a bacterial strain collection of a “set of precisely defined, single-gene deletions of all nonessential genes”. The bacterial strains are shipped to our lab in the form of filter disc and the knockout strains are Kanamycin-resistant.

To recover the cells, the three bacterial discs were suspended in antibiotic-free LB media. The cultures were incubated overnight in a shaking incubator at 37C. The WT culture is then plated on an antibiotic-free LB agar plate while the knockout strains arcA- and iclR- are plated in Kanamycin agar plates. The plates were incubated at 37C overnight to obtain single colonies on each plate.

The recombinant plasmid containing BBa_K3718007, with Ampicillin resistance, is purchased from IDT. The composite part is shown below:

Since iclR- E. coli is not a competent cell, a selected colony on the Kanamycin agar plate is suspended in 250μl of calcium chloride transformation solution in preparation of the transformation. 400-600ng of the above plasmid is added to the suspended colony. The following steps are the same as a general transformation procedure.

Transformed iclR- E. coli are plated on an Ampicillin plate. Colonies on this plate after overnight incubation should have obtained the plasmid thus the iclR gene. To verify the transformation, colony PCR is done and the results are visualized using gel electrophoresis. 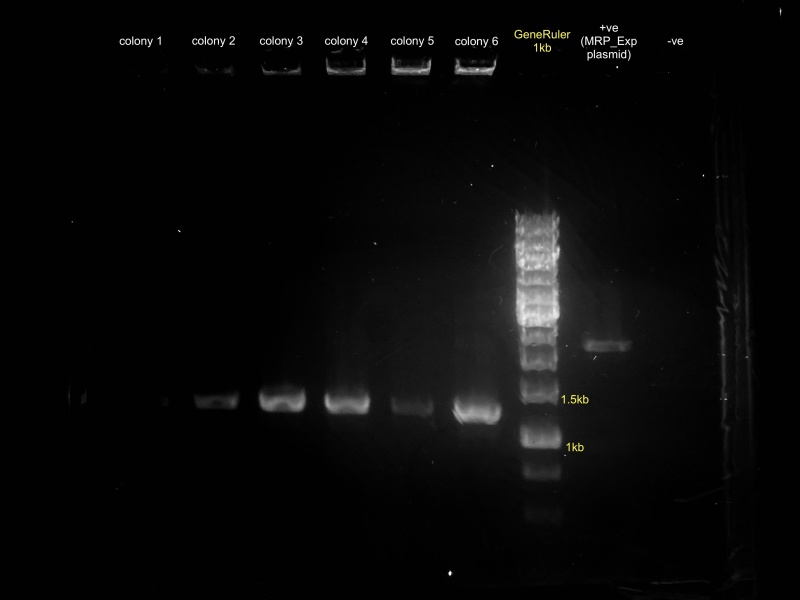 The amplified region is approximately 1.1kb. The band sizes of all colonies are between 1 and 1.5 kb, which reassures the desired plasmid has been successfully transformed into the iclR- E. coli to become the iclR-rescue E. coli.

Every step above was done in a sterile environment. We discovered in a trial run that a lid is necessary to avoid water loss to ensure accurate readings. Since we did not have one, we carefully covered the plate with a sterilized cling wrap over the top of the plate, ensuring there is no folding nor wrinkle on the wrap and it is evenly distributed. The experimental cultures, carried in the microplate, are placed into the plate reader. The FLUOstar® Omega plate reader has the following settings:

The following procedures are done to obtain the box plots below:

The detailed procedures can be found in [modeling]. 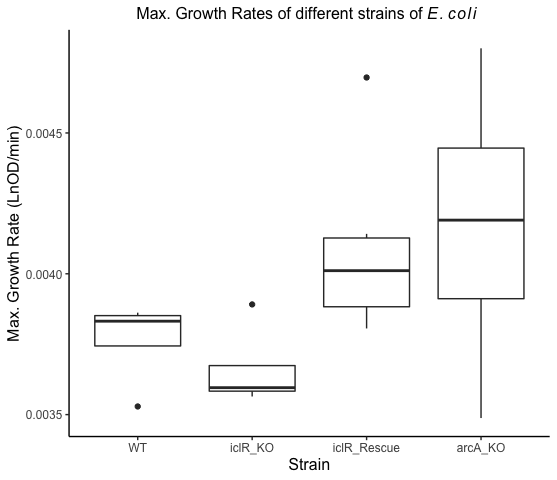 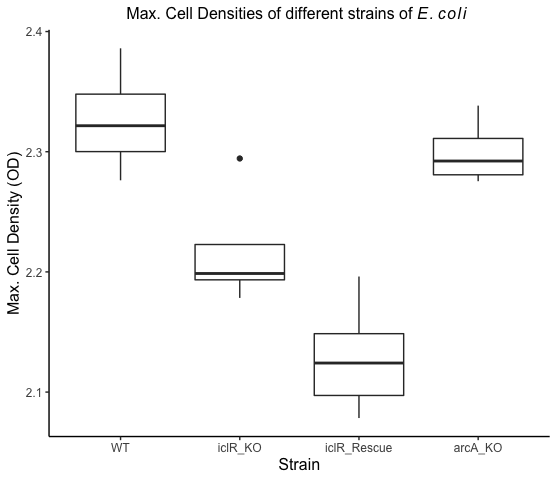 Box plots of the maximum growth rates and maximum cell densities are plotted by R using the parameters obtained from GroFit. Compared to WT, iclR- E. coli showed reduced growth while iclR-rescue E. coli showed the same to a slightly higher maximum growth rate. arcA- has a very large data range and no outliers can be excluded. However, using ANOVA and post-hoc test, there was no significant difference between strains in either maximum growth rates and maximum cell density. Despite not having significant results, the comparison between WT, iclR-, and iclR-rescue E. coli provide a sound foundation for us to carry on with growth assays using double-knockout strains.