The project is inspired by the study‘A Modular Receptor Platform To Expand the Sensing Repertoire of Bacteria’ (Chang et al, 2017), and the iGEM project NANOFLEX, by the 2020 UofUppsala team.

This is a schematic diagram that shows how the Modular Receptor Platform works. We will call the system and its protein components the MRP for the sake of simplicity. The receptor is expressed to locate on the bacterial membrane. Each receptor monomer has an extracellular single domain antibody, shown in yellow, and a split CadC DNA Binding Domain, shown in grey. When the antibody binds an antigen, the DBDs will dimerize to bind to the CadC operator. The cadBA promoter is activated to express downstream genes.

The single-domain antibody VHH region can be customized against different targets, so that any specific targets with single-domain antibodies available are potentially ligand candidates for this receptor. The NANOFLEX iGEM showed that the modular receptor platform (MRP) works as intended by the detection of caffeine, reproducing the paper’s results and showing that the platform is robust and rigid enough for it to be used.

As stated by the research group, the MRP system has so much potential in applications regarding diagnostics, therapeutics, and microbiome engineering. Due to the platform’s modularity, the detection of different ligands is also possible. We hope that by expanding upon this model it would have a wider variety of applications.

This picture below shows how our toolkit works:

Putting together the MRP and cell growth control, here comes our toolkit design. Our toolkit allows developers to produce customized GM bacteria (in our case, a GM E. Coli). As the input of the detection system, the developers can choose their target antigen by designing the antibody against the target antigen. As output, developers can decide what genes to express. At the same time, the growth rate of cells is restored. The combination could serve the developers’ purposes. 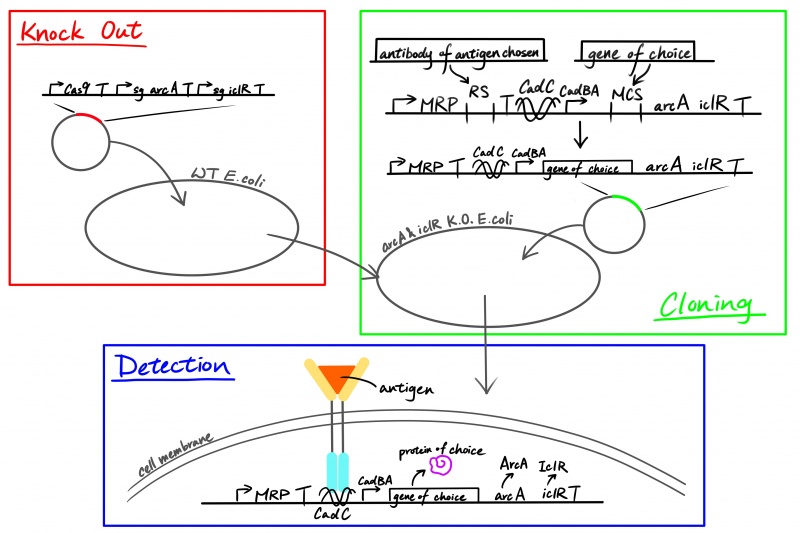 The first component of our tool kit is a plasmid containing the insert BBa_K3718012. To create a double-knockout strain for the next steps, a plasmid with CRISPR Cas9 gene and sgRNA that targets arcA and iclR is transformed into the wild type (WT) E. coli. The knock-out is done so that the cells achieve a lower growth rate than a WT (by 38%, according to a study). The double-knockout arcA-iclR- E. coli has now repressed growth. The repression is needed to allow more acute growth restoration and protein expression of the target gene cloned in the second step (see Toolkit component 2).

The second component of our tool kit is a plasmid containing the insert BBa_K3718002. The MRP protein is designed according to the paper published in 2017 (Chang et al, 2018). When the antigen/ligand binds to the nanobody, dimerization of the protein CadC domains occurs. As a result, this allows the binding of the pCadBA operon region, and transcription downstream is promoted at the same time. The VHH region has high flexibility as it can be customized for binding with different targets, so that any specific targets with single-domain antibodies available are potentially ligand candidates for this receptor. Instead of a VHH against Caffeine like NANOFLEX and the original study, we substituted the VHH region with a restriction site, where Developers can insert their own antibody VHH region against a desired ligand. Please go to [design] for a detailed explanation of the part design.

For the developers to clone the genes that they want to express, a multiple cloning site (MCS) BBa_ K660500 is present. The MCS will allow developers to insert their gene(s) of choice, which will be under the control of they CadBA promoter, which is activated when the target ligand is detected.

You have built your own detection tool!

After the VHH region and gene(s) of choice are cloned into the plasmid and transformed into arcA-iclR- E. coli, cell growth of the E. Coli is compromised. If the MRP detects the antigen, the antibodies undergo homodimerization, DBD binds and activates the pCadBA operon to cause the expression of the downstream genes, which are the genes the developer cloned in and the growth genes arcA and iclR, so that the growth is restored while desired proteins are produced.

We have done a cell growth assay to show how transforming a lost gene could restore the growth of the bacteria compared to WT and knockout strains. We transformed a plasmid containing the insert BBa_K3718007, which is an expression unit of IclR, into iclR- E. Coli, to become iclR-rescue.

The maximum growth rate of iclR- E. Coli is lower than the WT as expected, but iclR-rescue overshot the WT strain in terms of growth rate. The implications of the results are that the KO reduces the growth rate, but the rescue can restore and may even increase the growth rate of the bacteria compared to WT.

We had difficulty verifying the transformation of the MRP gene into WT, so the team CityU_HK lent us help to repeat the experiments in their lab. Appropriate band size appeared in gel electrophoresis of the colony PCR products, and the expression of mrfp BBa_E1010 (as a reporter) has also been successful under IPTG induction.

As the VHH region can be changed to detect any ligand, the applications of the toolkit are highly diverse. One of the possibilities is the detection of diseases such as bacterial infections or cancer via detection of antigens. Another possibility is to allow the toolkit to mediate reactions by making it produce enzymes while enhancing proliferation, such as regulating endocrine cycles. Using this toolkit to make substances only when the signal is given may also be a potential application as the creation of various biomolecules may be taxing to the bacteria, and having a way to mediate the production of various substances may be beneficial to the developers.

The meeting with Professor Kong of the City University of Hong Kong has given us different ideas on the applications of our kit too. He told that some proteins, when overexpressed, will harm the cell and decrease the rate of protein production. He suggested a niche for our project, that the alleviated cell growth compensates the small protein production of each cell, so that potentially toxic proteins would not accumulate to the limit when industrially produced.