Chemical recycling of PET is considered to be one of the best ways to close the loop on the plastic supply chain and contribute towards the concept of circular economy in plastics. The technology is evolving rapidly in order to allow more efficient PET degradation into its constituting monomers, terephthalic acid (TPA) and ethylene glycol (EG). In our project, we developed a dual enzyme system to synergize existing PET depolymerization processes which use a single enzyme, PETase. We went through a cycle of engineering (Research → Design → Build → Test → Learn → improve). In 2019, our team created two successful PETase mutants, which were shown to exhibit higher enzymatic activity than that of WT PETase. This year, we performed PET film digestion with WT PETase and PETase mutants, S245I PETase in order to study its performance. Scanning Electron Microscope (SEM) images of digested PET films showed surface erosion. However, High-Performance Liquid Chromatography (HPLC) profiles of products released from PET film digestions revealed considerable amounts of intermediate product, mono(2-hydroxyethyl) terephthalic acid (MHET). It suggested that PET cannot be completely depolymerized by WT PETase and its mutant alone. Then we started the process of researching and brainstorming possible ways to achieve complete PET degradation.

From literature reviews, we found that MHETase catalyzes hydrolysis of MHET into the monomers of PET, TPA and EG. Thus, we hypothesized that the addition of a second enzyme, MHETase, in the PET depolymerization system synergizes the degradation rate of PET into its constituting monomers. The concept of developing a dual-enzyme system was supported by the existence of a natural PET degradation system in a bacterium, Ideonella sakaiensis, which produces both PETase and MHETase to degrade and assimilate PET [1]. Also, a recent finding of improvement in PET depolymerization with a dual-enzyme PETase/MHETase system using chimeric proteins offered further insight for us to design a chimeric protein of WT PETase and MHETase [2]. Then we design a chimeric construct WT PETase-MHETase cloned into the expression vector pET-21b, which has a C-terminal His-Tag for protein purification. However, we found that the protein induction and extraction protocol we used previously were not suitable for new constructs, and several attempts were made to optimize the conditions. In the end, chimeric protein was successfully expressed and purified despite the presence of multiple bands. The hydrolytic activity of purified chimeric protein was tested by PET film digestion and analyzed by HPLC and SEM. Since the purified chimeric proteins used in PET film digestion contained a mixture of other proteins, only trace amounts of PET degradation monomer, TPA, were detected. The protein extraction protocol needed to be further optimized. To gain a more comprehensive view on the action of two-enzyme systems, we also developed the system in the form of enzyme cocktail in which purified proteins of WT PETase and MHETase were mixed in a single reaction. Thus, we designed the MHETase construct, which was also cloned into expression vector pET-21b for protein purification. We demonstrated that PET degradation achieved by enzyme cocktail of WT PETase and MHETase was impaired compared with that achieved by single enzyme WT PETase. We speculated that the fusion of MHETase to PETase impaired activity of PETase and subsequent PET depolymerization.

After the digestion of polyethylene terephthalate (PET) plastic for 96 hours at 30°C using WT PETase designed two years ago, we analyzed the eluent with High-Performance Liquid Chromatography (HPLC) and noticed that the monomer mono-(2-hydroxyethyl)terephthalic acid (MHET) was present in high concentrations, suggesting that PET is not fully depolymerized. On the other hand, the bacteria Ideonella sakaiensis not only secretes PETase, but also MHETase, which can digest MHET. Since MHETase can digest MHET, one of the intermediate products of PET digestion into constituent monomers, we created a chimeric protein, linking WT PETase and MHETase, with the aim to further synergize the PET depolymerization process by completely depolymerizing PET.

Our experiments focus on two ways of incorporating two enzymes into a single reaction: in the form of protein chimeras and enzyme cocktails. To construct the chimeric proteins, PETase and MHETase are covalently attached by a linker. To engineer the chimeric protein, we used the pET-21b plasmid as our expression vector. Following the sequence from the 5’ end to the 3’ end, we have the T7 promoter, the lactose operon (LacO), the ribosome binding site (RBS), the coding sequence of PETase, a 12-amino-acid flexible serine glycine linker, the coding sequence of MHETase and a 6x His-tag before a stop codon (Figure 1). The T7 promoter induces faster gene expression, which leads to a higher yield of our chimeric protein. The LacO reduces basal expression of PETase in normal conditions and prevents leaky expression as it is highly effective. Our PETase-MHETase chimeric protein would only be expressed when IPTG is added to the culture medium, so it prevents the overexpression which may lead to death of bacterial cells in uninduced conditions. 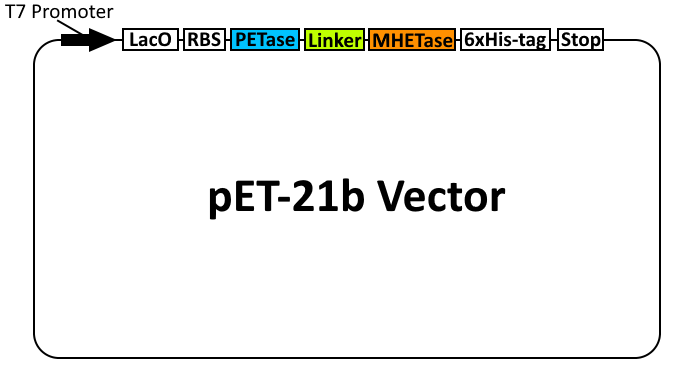 Figure 1. The basic backbone of a chimeric construct, PETase-MHETase.

In this project, we are using a 12 amino acid serine-glycine linker (Figure 2) to connect the C-terminus of PETase and the N-terminus of MHETase.

Referring to Knott (2020), linkers with 8, 12, and 20 amino acid lengths were put in test to determine which one exhibited the best performance. It was demonstrated that using a 12 amino-acid linker to link MHETase with PETase will give the highest PET depolymerization activity [2]. In the study, the amino acid sequence of the 12-amino-acid linker used was GGGSGGSGGGSG, and we use it as our linker sequence.

Linkers consisting of only serine and glycine residues are called flexible linkers. Flexible linkers are usually applied when the joined domains require a certain degree of movement or interaction. They are generally composed of small, non-polar (e.g. glycine) or polar (e.g. serine or thymine) amino acids. The small size of these amino acids provides flexibility and allows for mobility of the connecting functional domains. Besides, suitable space between two proteins will improve protein folding and thus activity [3].

Serine and glycine are small amino acids. They provide good flexibility due to their small sizes, and also help maintain stability of the linker structure in the aqueous solvent through formation of hydrogen bonds with water. As serine is polar, its incorporation can maintain the stability of the linker in aqueous solutions by forming hydrogen bonds with the water molecules, and therefore reduces the unfavourable interaction between the linker and the protein moieties.

(A) Protein expression and purification of WT PETase-MHETase

Proteins of PETase-MHETase chimeras were expressed in E. coli C41(DE3). The chimeric protein was induced by the addition of 0.5mM final concentration of IPTG in a 100mL LC medium shake at room temperature for 16 – 20h. This protein extraction protocol was optimized for WT PETase protein previously. However, this protocol didn’t work for PETase-MHETase. Since these single proteins have smaller size (30kDa), we were able to express and purify WT PETase and S245I PETase in the same round of protein induction and extraction. We believe that the bigger size of WT PETase-MHETase might be one of the factors affecting the expression (Figure 3). 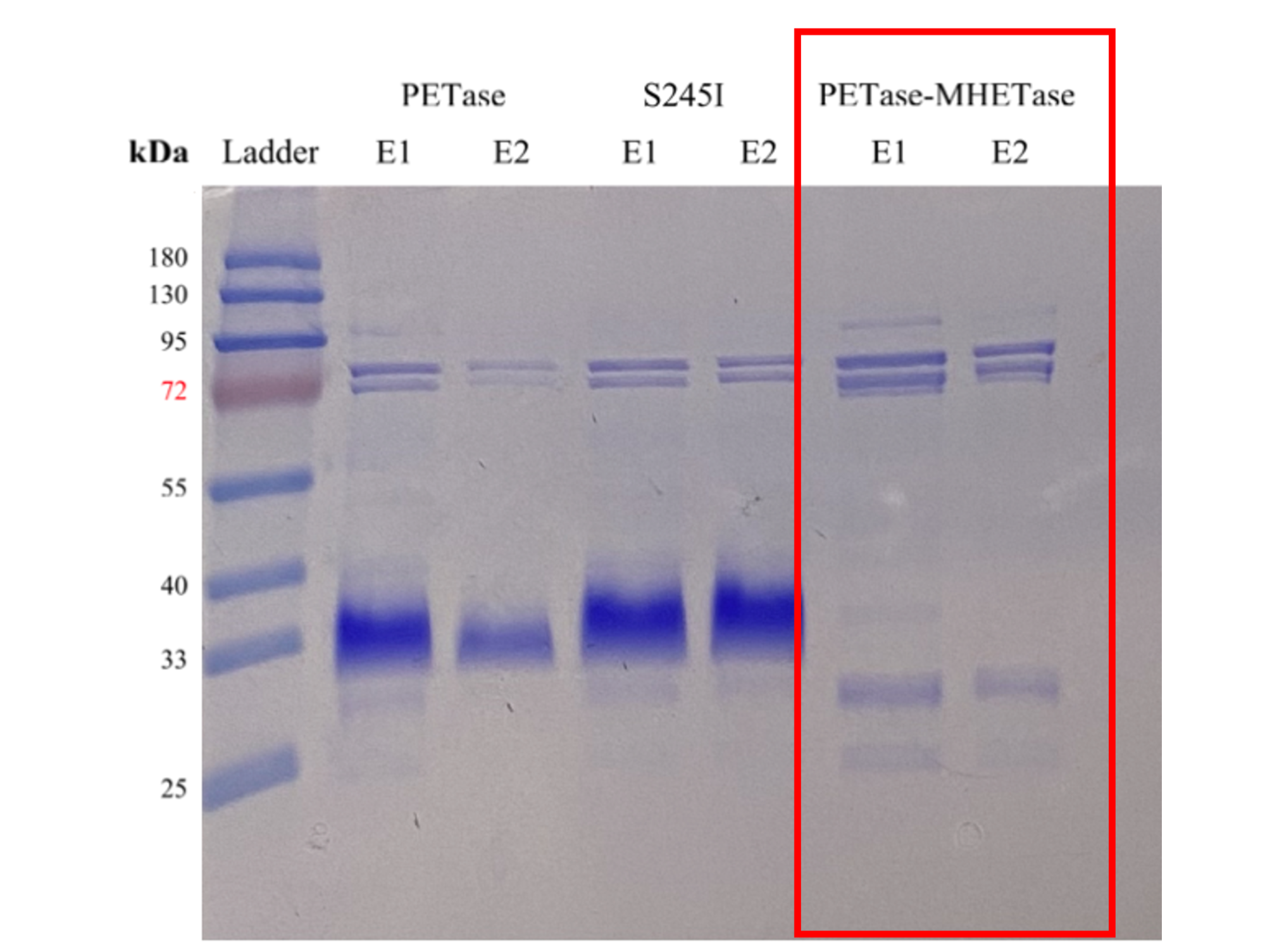 We learned that the E. coli strain, temperature, design of linker and IPTG concentration might affect the expression of chimeric protein. Therefore, we tried to optimize the temperature of protein induction. Since the induction temperature of protein expression at 12°C – 16°C can improve the folding and increase the solubility of the chimeric protein, we lowered the temperature from room temperature to 16°C and changed the culture volume from 100mL to 400mL, increased the time of shaking from 16 – 20h to 28 – 30h, and used the same concentration of IPTG (0.5mM). Our chimeric protein is successfully expressed and purified, giving a thick band in the area corresponding to their mass in the SDS-PAGE result (Figure 4). 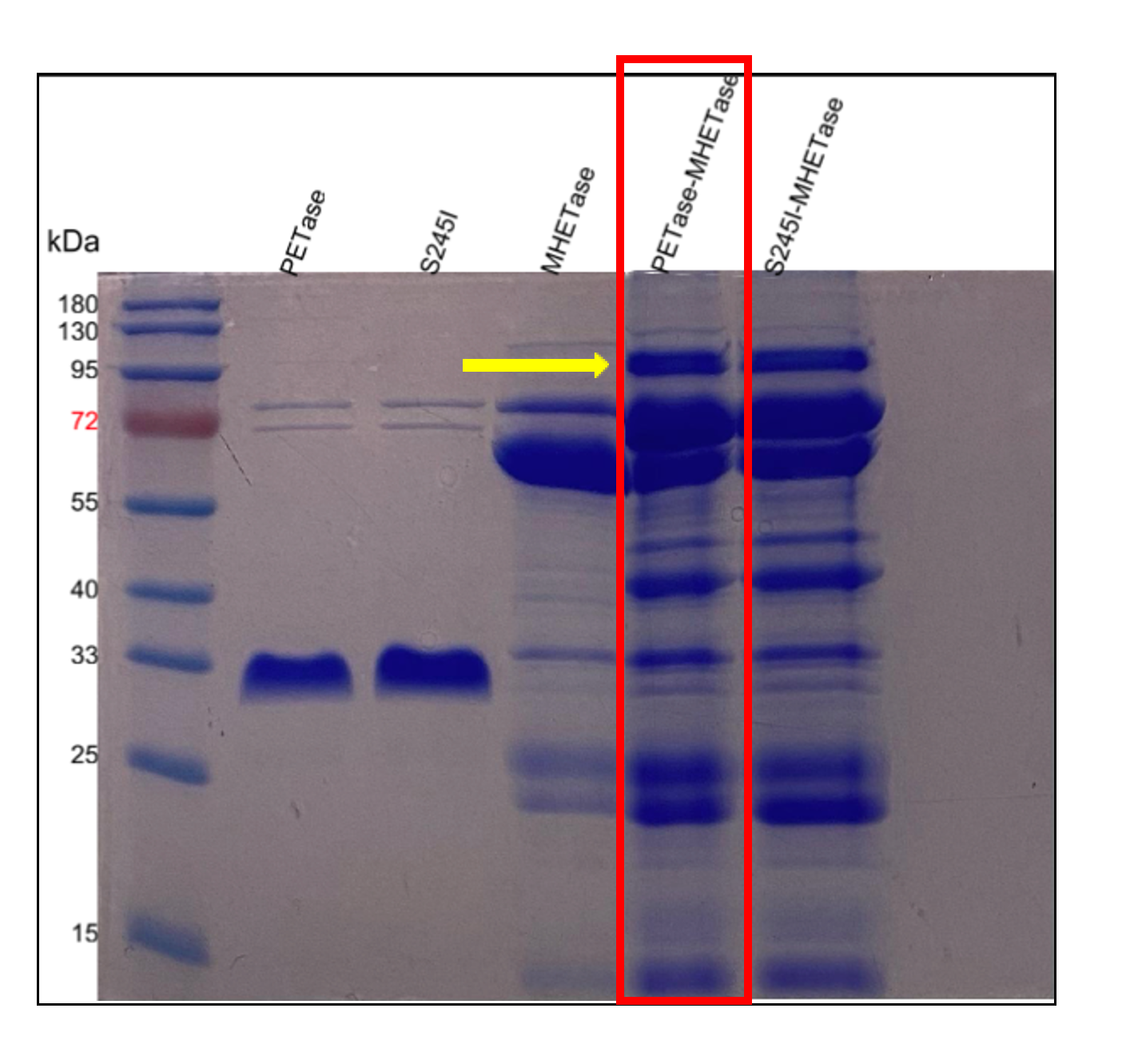 Despite the presence of multiple bands using the revised protocol, the results of SDS-PAGE demonstrated that the PETase-MHETase chimeras are successfully expressed and purified. The protein induction and extraction protocol will be further optimized in the future in order to obtain a single band of chimeric proteins.

(B) HPLC profile of the products released from the PET films

Products released from PET films after digestion with WT PETase-MHETase were detected and quantified by HPLC. 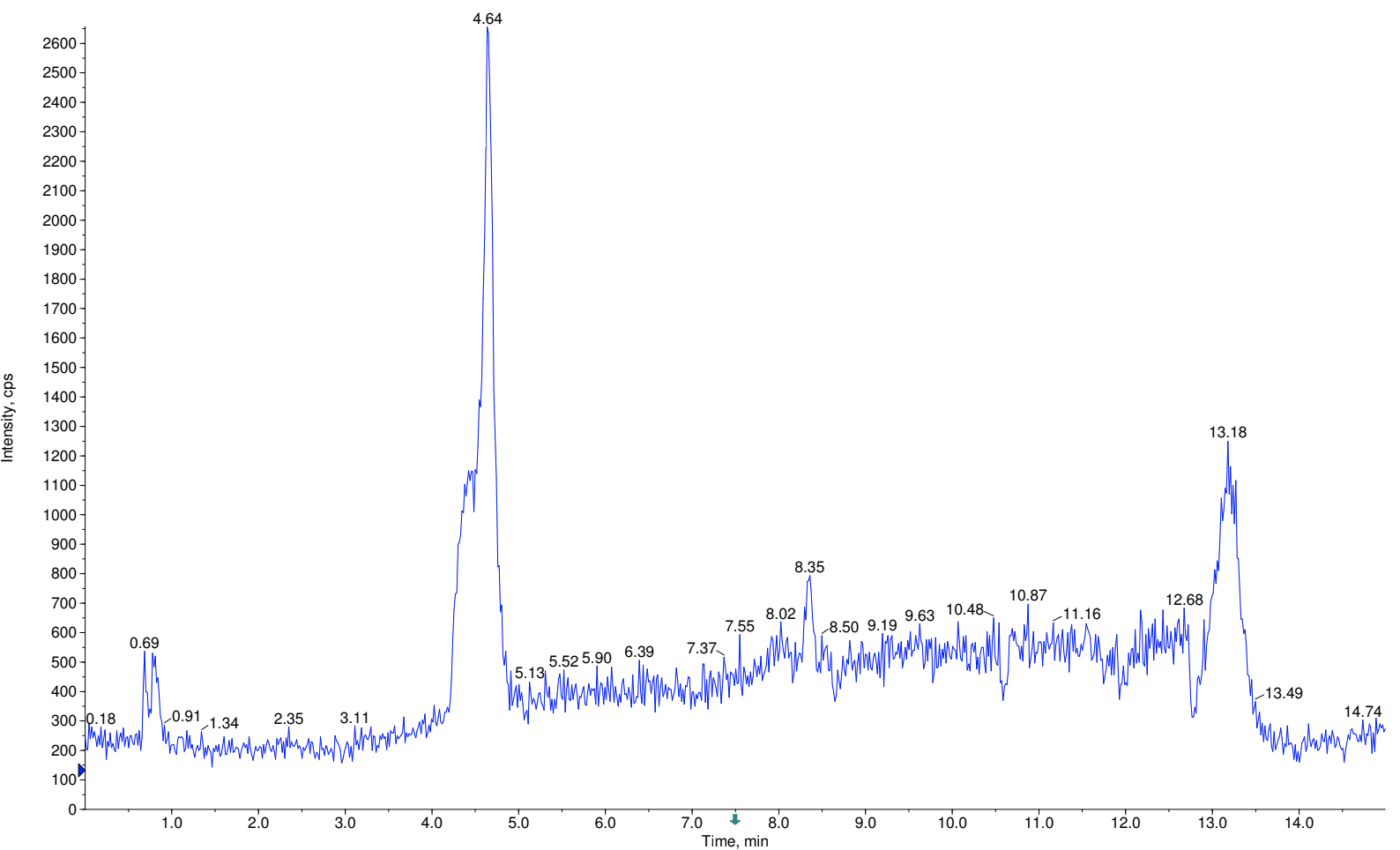 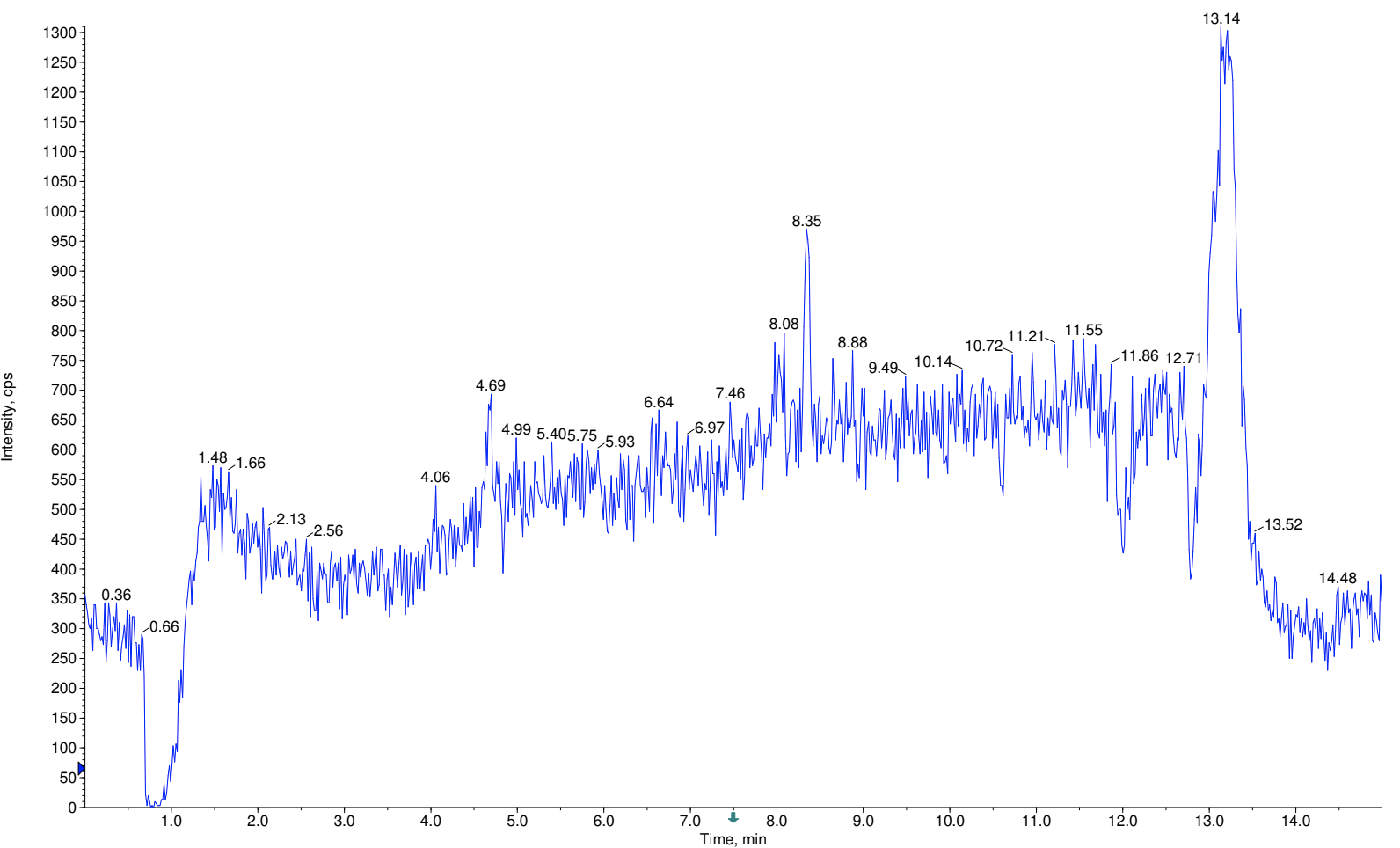 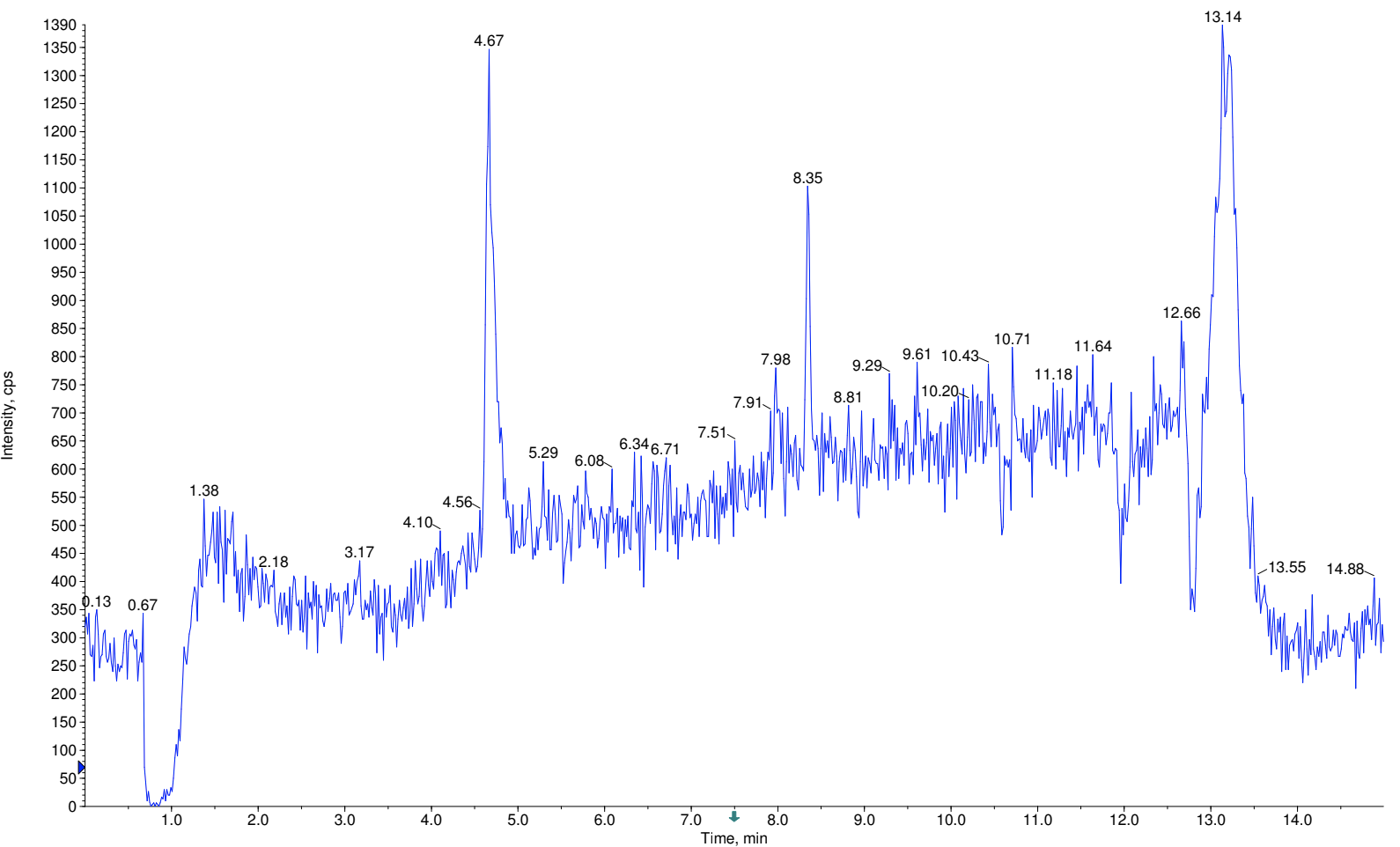 (iii) Products released from the PET film incubated with buffer only 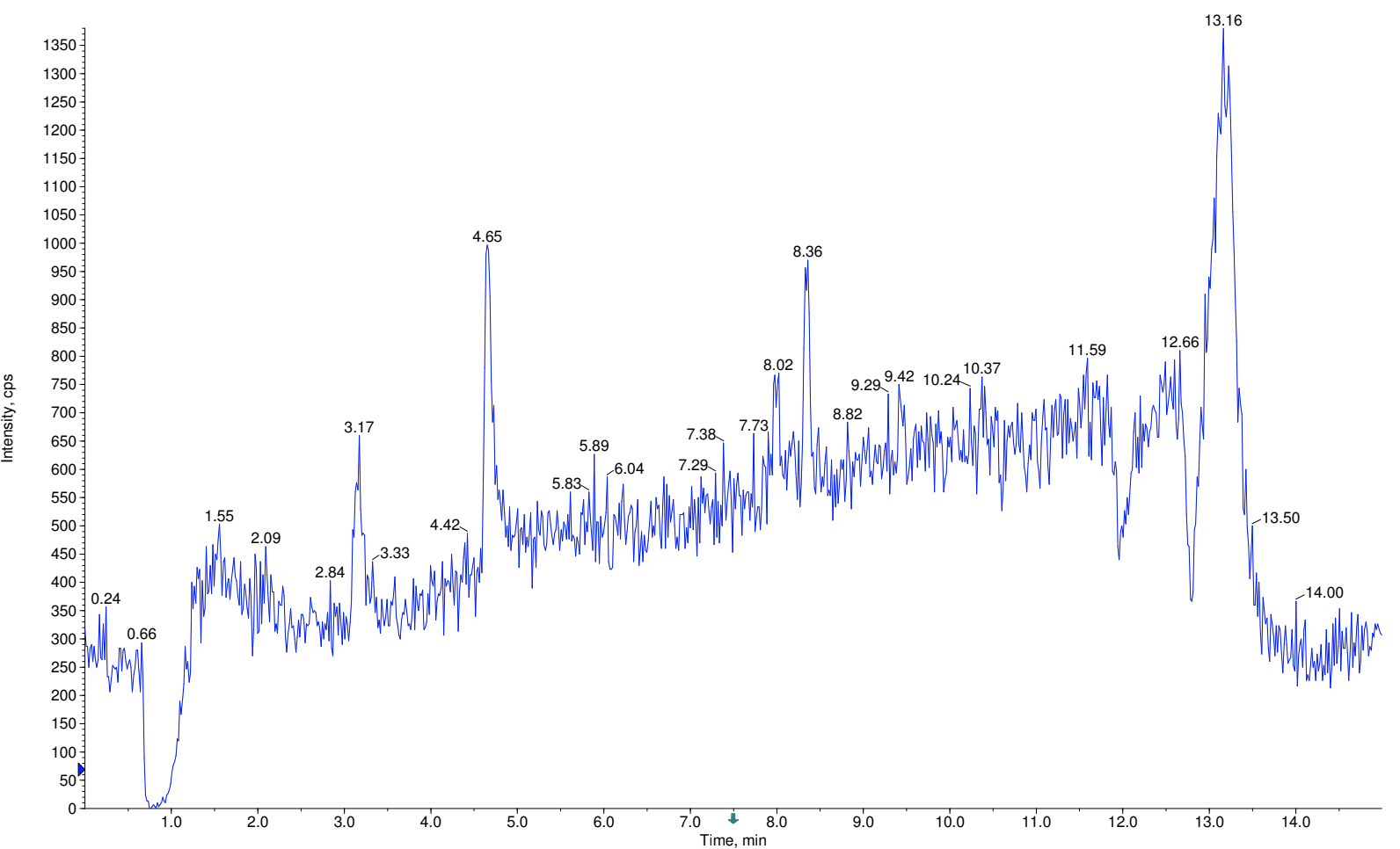 Figure 7. HPLC profile of products released from PET film digestion with buffer only

HPLC profiles demonstrated that the detection peak representing TPA monomer has a retention time at 4.64 minutes (Figure 5). 8μL and 16μL of extracted chimera protein was used to digest PET film in order to investigate their PET depolymerization activity. HPLC data showing that trace amounts of TPA were detected in eluents of PET film digestion with PETase-MHETase, suggesting that the chimeras exhibit PET depolymerization activity (Table 1). However, the concentration of chimeric proteins added were different due to the presence of impurities as indicated by multiple bands observed in SDS-PAGE. Therefore, their degradation rate could not be compared. 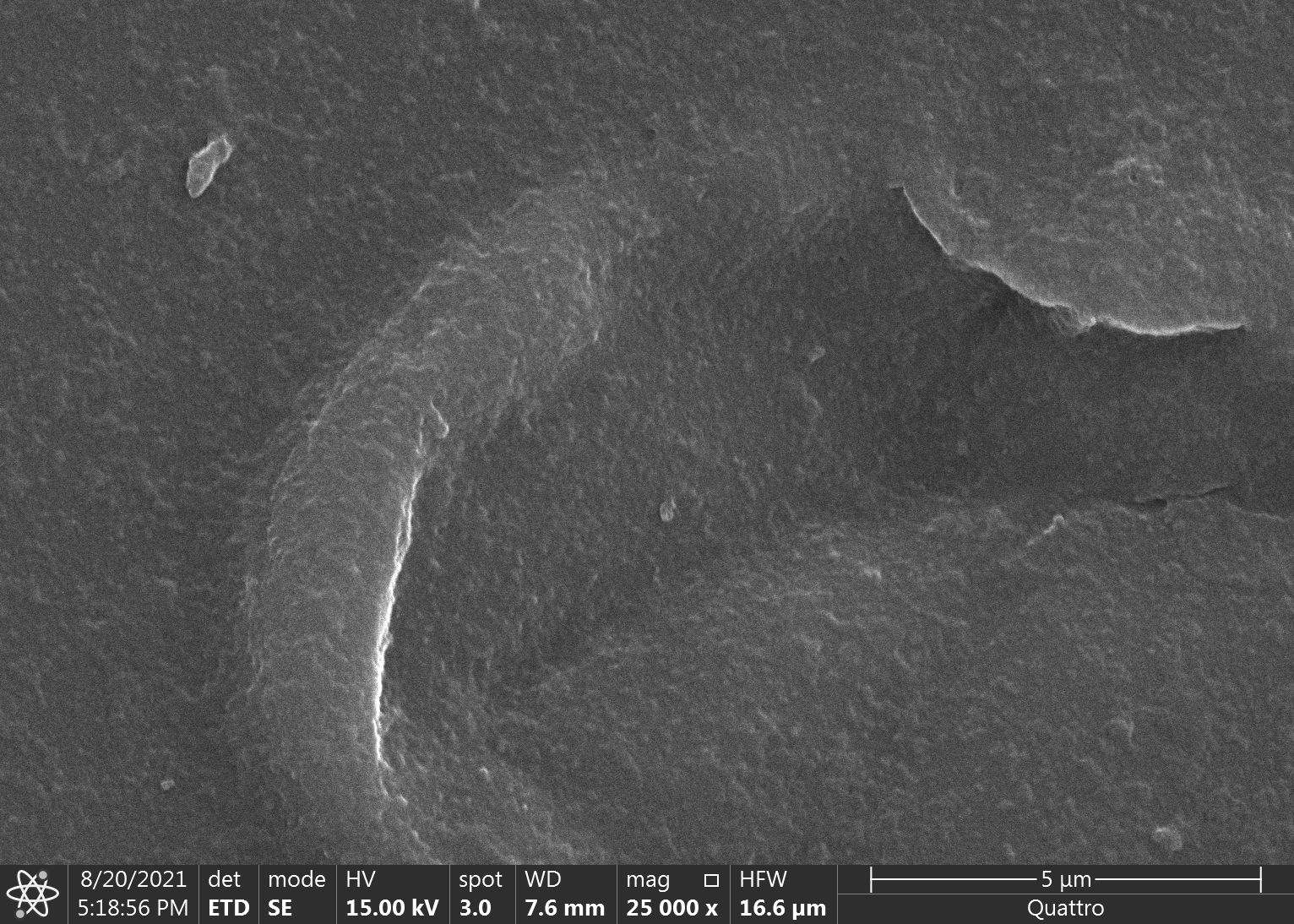 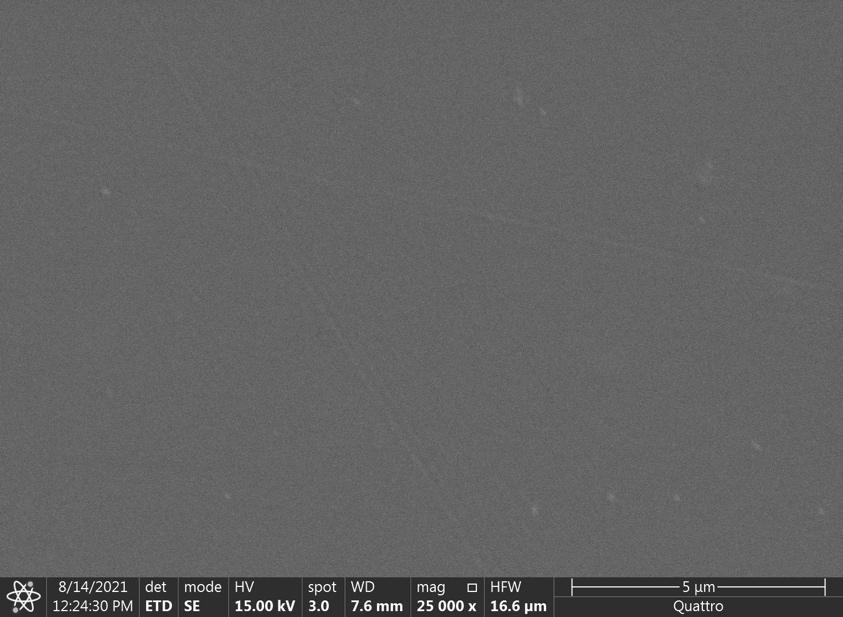 Figure 9. PET film after incubation with 16μL buffer only

Since a few bands were obtained in our purified chimeric protein WT PETase-MHETase, SDS-PAGE and western blot were performed to confirm the identities of purified proteins. All the genes encoding WT PETase-MHETase were cloned into the expression vector pET-21b, which has a C-terminal His-Tag. Therefore, His-Tag antibody was used for the verification of expressed protein. 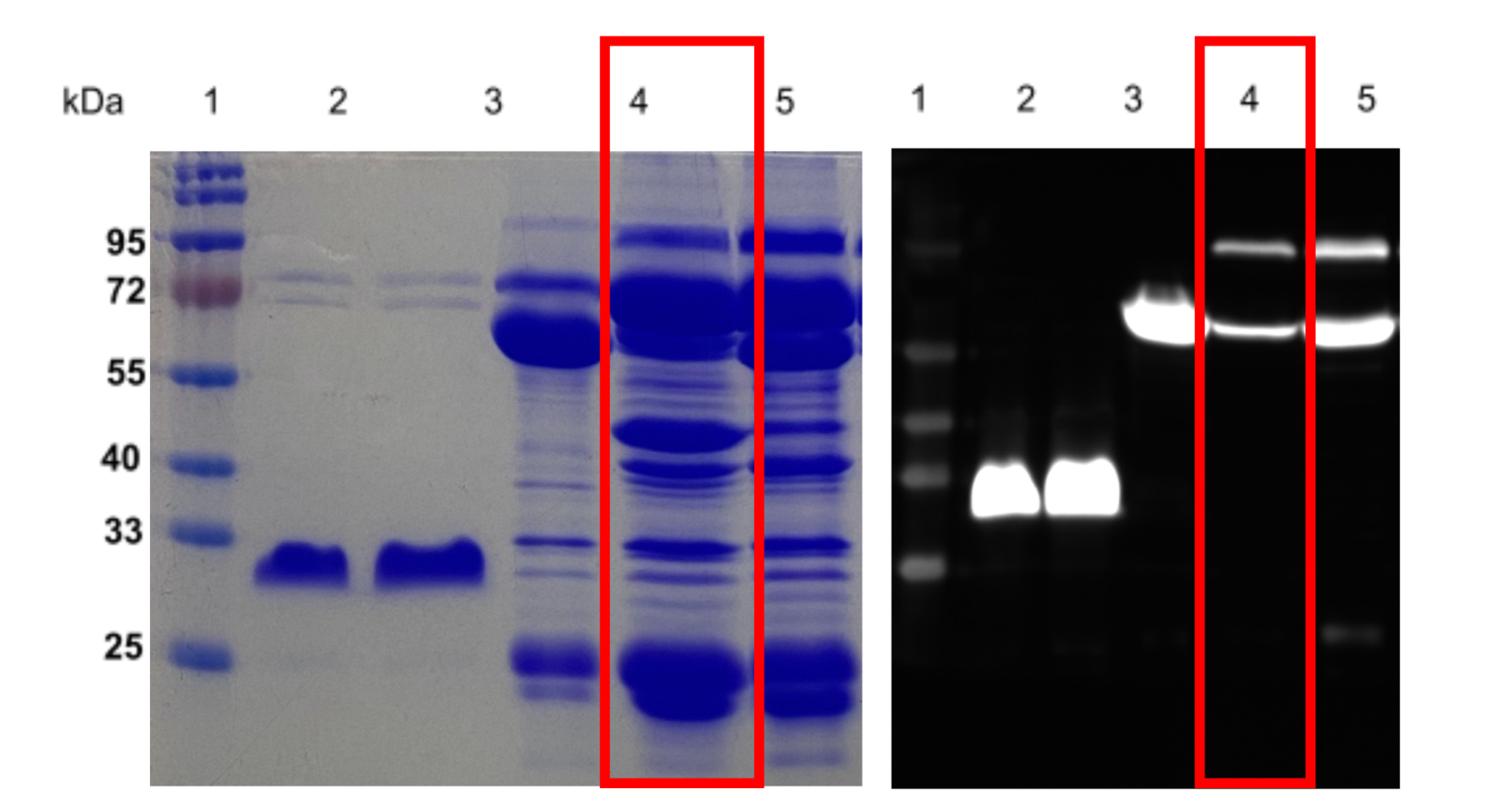 Our SDS-PAGE results showed that the purified WT PETase-MHETase protein was expressed (Figure 10). Clear bands with correct sizes were observed in the western blot of all purified proteins (Figure 11).

These results demonstrated that our chimeric protein, PETase-MHETase, was successfully expressed and purified. It exhibited PET depolymerization activity as seen by the presence of TPA detected in HPLC analysis and the degraded PET film surfaces observed under SEM.

This engineering cycle has led us to the challenge to test different combination of amino acid length and sequence of protein linker in the chimeric protein in order to improve protein folding and thus its expression. Also, we will optimize our protocol, such as the imidazole concentration used in our wash and elution buffers. After obtaining our purified WT PETase-MHETase protein, we can develop a more efficient system for complete PET depolymerization.