Results of our experiment


As an intermediate point in our project, it is important that the designed Cas12a recognizes the HHV-6-derived DNA based on the sgRNA. We designed Cas12a with the purification tag attached, but the length of our parts did not match the length of DNA that can be synthesized. Therefore, the parts to be subcloned were divided into three fragments of synthesizable length, and we obtained the necessary parts by multiple cloning them. 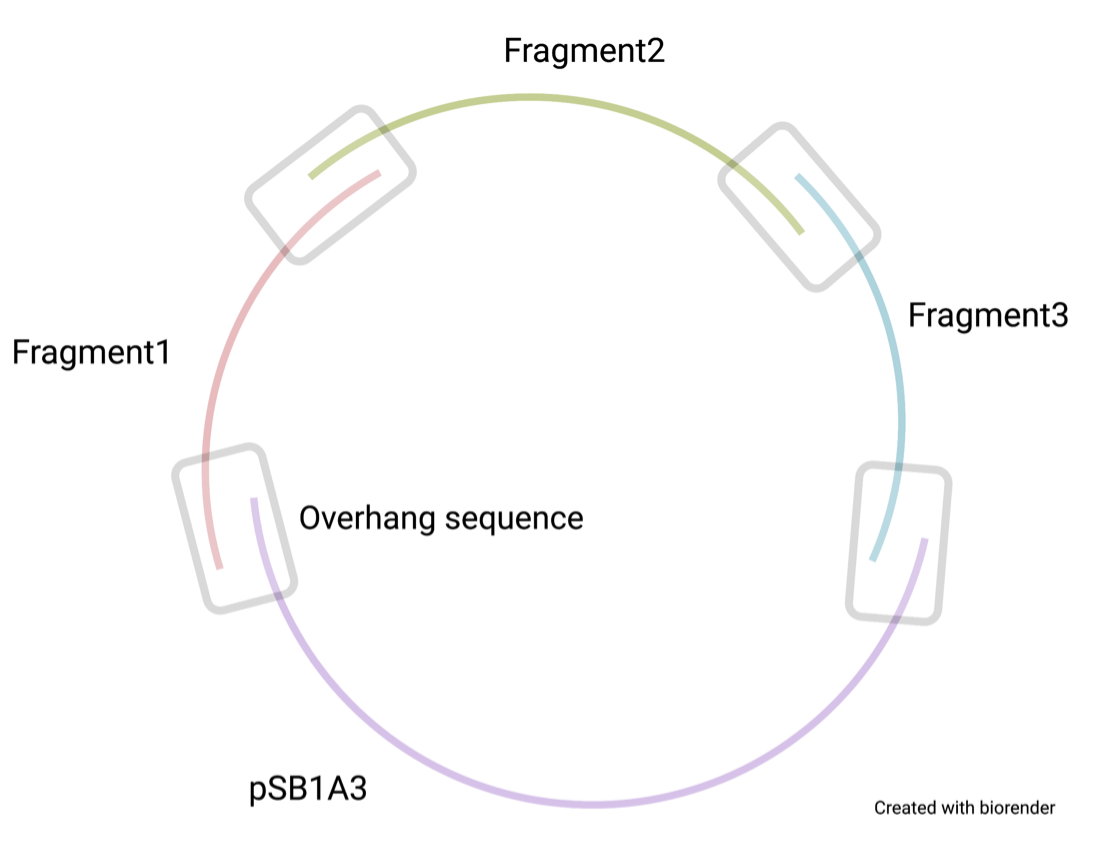 Figure1. Overview of our DNA fragments 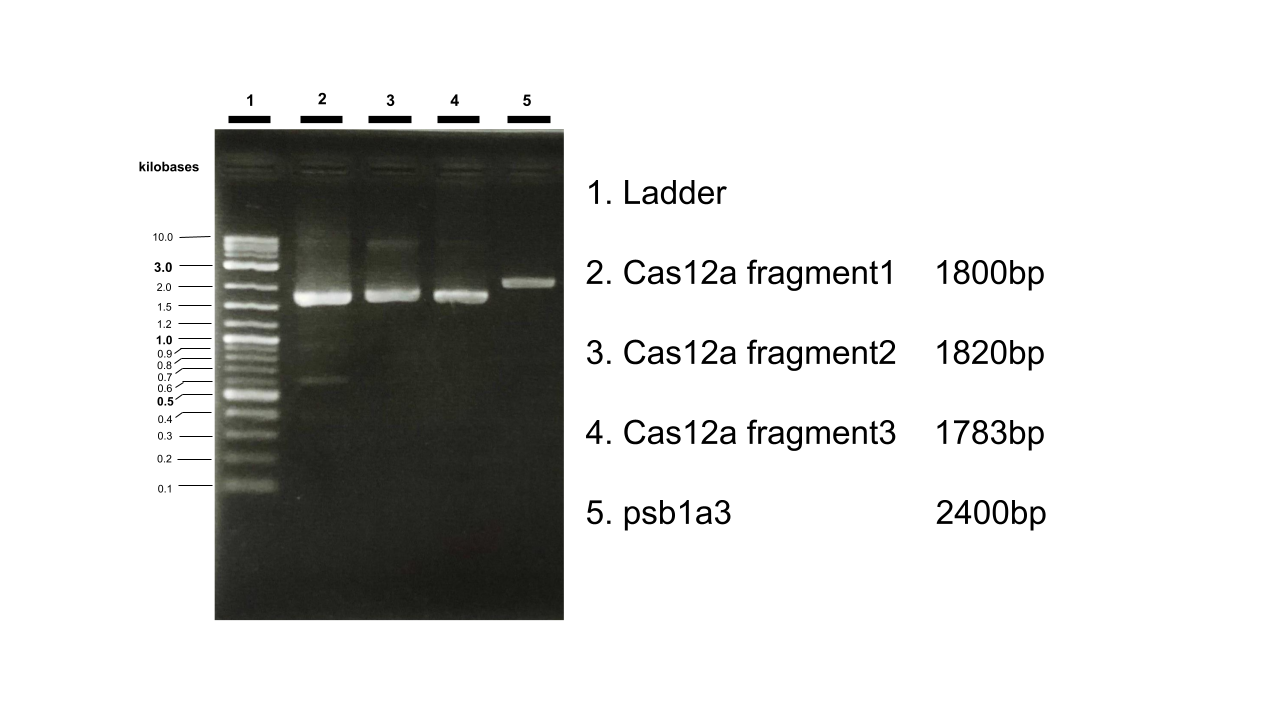 Figure2. PCR amplification of each fragment

DNA was ordered from Twist Bioscience. Our parts were roughly 5400 bp long, but the upper limit for custom DNA synthesis services was 1800 bp. Therefore, we decided to split our DNA into three parts and assemble them in vitro to get the full construct. We firstly amplified each fragment and the backbone (psb1a3) by PCR, and overhang sequences for assembling was added to each of the backbone and fragment 1 and fragment 3 during PCR, and then performed Gibson assembly to obtain the full constructs.

We tried to assemble the amplified DNA fragments by in vivo cloning using E. coli. Unfortunately, the assembly was not succussed, and no colonies could be seen on the plate. We think that the fragments to be assembled were too long, which may have reduced the transformation efficiency. We gave up on in vivo assembly and decided to construct a plasmid by joining DNA in vitro and then transforming E. coli into the NEB10-beta strain. After the transformation, we were able to confirm colonies. After confirming the colonies, we performed direct colony PCR using the Fw primer of Fragment 1 and the Rv primer of Fragment 3 to confirm the existence of the insert DNA. The total length of our insert was about 5400 bp, and direct colony PCR showed a band close to the theoretical value.

In order to prove that the plasmid was constructed correctly, we used the Sanger method to analyze the sequence of the linkage sites between the fragments on the plasmid. Sanger sequence was conducted as shown in Figure 4. We sequenced the junctions of each fragment from forward and reverse, respectively, and confirmed our plasmid was fully constructed. All the junctions we had assumed on in silico were found in the Sanger sequencing results, which suggest that the full construct was successful. 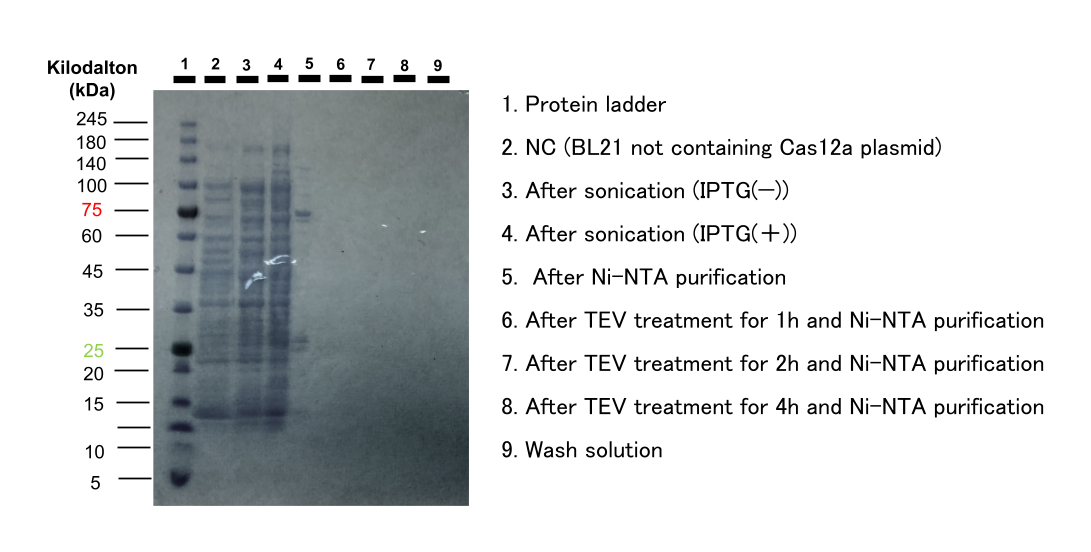 The results of Direct colony PCR and Sanger sequencing showed that the assembly was largely successful. We then tested whether LbCpf1 (Cas12a) encoded on the plasmid could be expressed. The plasmid was extracted and transformed into BL21 (DE3), and IPTG, an inducer was added to promote the expression of Cas12a. Cells were disrupted by sonication, and Cell Extraction Solution was purified by affinity chromatography with Ni-NTA. After purification, the solution was treated with TEV protease to eliminate the tag sequence from Cas12a and purified again with Ni-NTA column.

Figure6. Qualitative and quantitative testing of crRNA by bioanalyzer


To obtain the crRNA for Cas12a, we added T7promoter sequence to the template DNA encoding the crRNA by PCR. We then transcribed each DNA using the T7 MEGA script kit to obtain the crRNA. Each RNA was quantified and qualified by 2100 bioanalyzer from Agilent biotechnology, and our target sequence of 61nt RNA was confirmed in crRNA_1 for T7 phage and crRNA_1,2 for HHV-6, respectively.