Why is education important?

Without education one would not have the skills, the information and the knowledge to cope with their surrounding environment. Education helps us understand and respect the world around us and our role in society. It is the tool to enhance our fantasy so we can explore new ideas and recreate the things that already exist. Only with education , one is able to survive in this ever-developing and ever-shifting society.

If you are trying to broaden people’s minds and show them something new or teach them something different, what is a better way of doing it than educating them from a young age. Synthetic biology is not a simple concept to explain to a child. We constructed a very carefully thought out “learning while playing” experience for them that was met with great success. We then focused our education plan in older ages with a very different approach.

“Discovering the Microcosm” an Activity Program for Kids, in Natural History Museum of Crete - University of Crete

One of our main human practices goals was to approach several age groups through educational programs about Biology. As soon as in person events were allowed again, we came in touch with the Natural History Museum (University of Crete) to organise an event for small groups of kids from 6 to 13 years old where they would get to know some basic principles and facts of biology and the microcosm. After several meetings with Miss Olga Berdiaki, we came up with a program that would include a short narration about biology and specifically how bacteria communicate via plasmids. 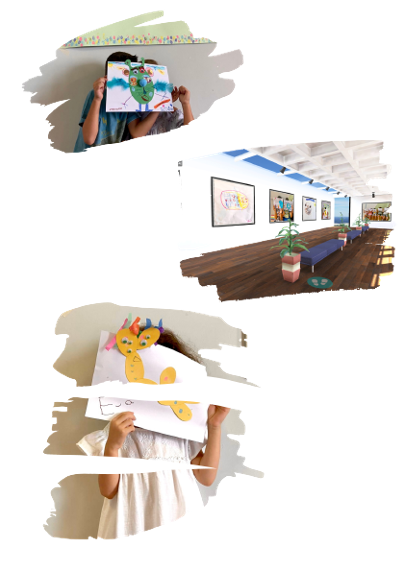 We wanted to brainstorm the concept of microbiology with the kids, by starting with something already familiar to them. We chose a biome of their preference and wondered which organisms that we cannot see, live there. A video would accompany this narrative followed by a discussion with the kids where we would answer any questions that may have emerged. Afterwards, with what we discussed about plasmids in mind, we would play a game where different tasks could only be accomplished by collaborating and exchanging plasmids that would allow the kids, as bacteria, to acquire the adequate “super-power” to complete the task in hand. In the end every kid could draw their own bacteria which would have a name and a special super power. Pictures of the crafts and drawings were collected at the end and displayed in an online exhibition that we specifically designed for the program. The event lasted 5 days in total and dozens of kids came to participate. It was overall a memorable experience as we got to design fun activities that intrigued little kids whilst we could teach them about complex subjects of biology in a comprehensive and imaginative way. 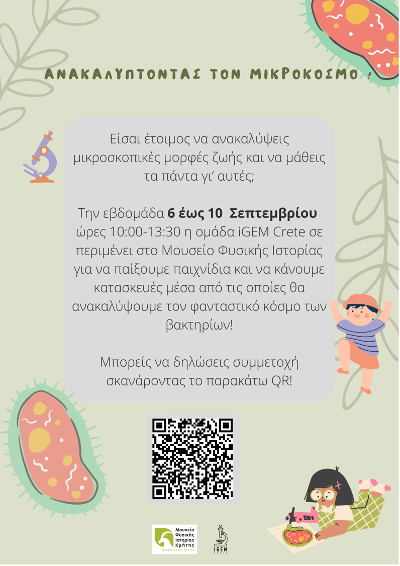 Another benefit of the program we designed was that it worked as a preparation for the children for going back to school after several months of online classes followed by summer break. They got to make new friends and adjust to following instructions and stick to a program with the rest of the group. Finally, we made sure that all of them were familiar with the safety measures they would need to comply with in the classroom i.e. wearing their masks, washing and disinfecting their hands and using their own or disinfected supplies for making crafts. 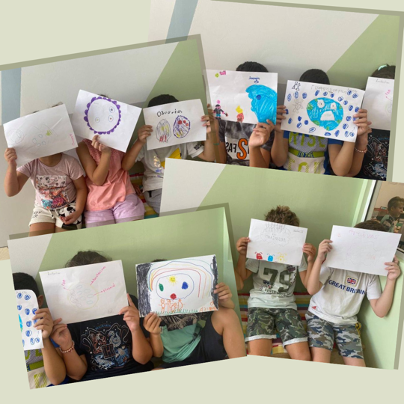 Children are generally predisposed to learning about the intricacies of science. This is where science education plays a major role during children’s early years. Their curiosity should be exploited in order to creatively indulge them in the world of science. Education can’t be limited by age, hence, we decided that reaching out to the Creative Kids Education Center was a great opportunity to bring our little friends one step closer with the otherwhat confusing terms of synthetic biology. We focused on microorganisms and our goal was to teach them the concept of plasmid transmission among bacteria. Through this action we hopefully managed to introduce children to an upcoming form of education: Intertwining the act of playing and learning in an environment that has broader than usual limits and restrictions.

Our activity program was consisted of three parts:

Introduction: Getting to know the microorganisms and their magical abilities!

We talked about bacteria and mentioned their mode of communication through plasmids, which are double-stranded circular DNAs in various sizes that give bacteria properties such as antibiotic resistance ( in this case we told the children to choose an imaginary property of their own that could be transferred). We tried to involve the children in the story by making it more interactive and direct so that it would be even more understandable to them. We allocated some time for questions so as to continue with the game once everyone was on the same page.

The game was inspired by the classic game of musical chairs with the twist that in our version groups of three people would form a bacterium. The two children forming a circle will be the main bacterium in which the third child will represent the plasmid. The children themselves would choose what super power each group would have, i.e. each bacterium. As long as there was music, the children danced with their group, but whenever it stopped, each “plasmid” had to be transferred to another bacterium (group) immediately. Any plasmid that would not manage to find a free group was the one that would lose each round.

Finally, the children, inspired by our storytelling and their games , painted their own bacterium in which their plasmid was contained . The story we narrated to our little friends was the following:

It is no secret that in the academic world there is still a long way to go in terms of inclusiveness. In most of the world, people with sight problems have little to no access to academic material in Braille. In some extreme cases, even high school material is not available in Braille. Even though alternatives for such people do exist such as audio narrations, it still remains primordial that written Braille texts exist. 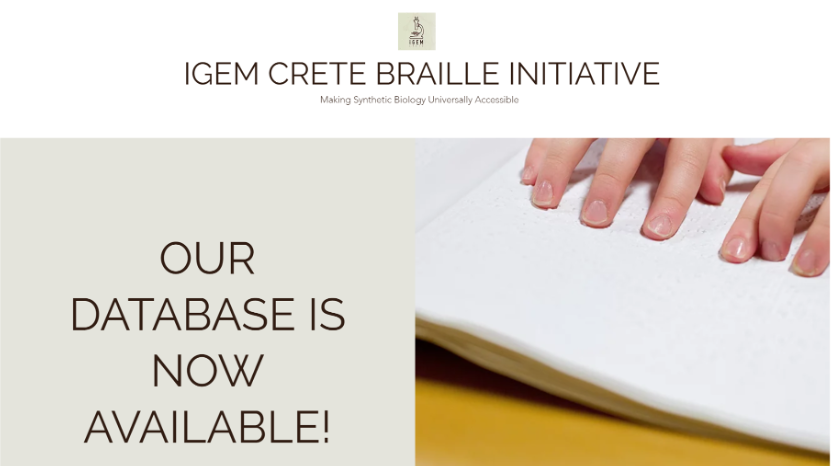 During our research in the availability of academic papers and school material in the field of biology in Greece we noticed a staggering absence of said resources. Trying to compare the state of Greek Braille material to other countries we could not help but notice that many other countries have been stagnant in the same field. It was then that we actually realised the dire need for a global, concerted effort to create a global, public access database in which everyone could upload biology related texts in their respective Braille language. Moreover a chance appeared to create multilingual Braille translators both in their actual form but in a mirrored one as well for easier printing.
Given that such an initiative hasn’t been launched before, we decided to commence it ourselves. We began by contacting individual teams that have demonstrated an interest in the field of inclusiveness whether in past or the current iGEM competitions. After witnessing a surprising interest from many teams we decided to broaden our reach by sharing our idea with the entirety of the 2021 Teams in the Collaborations Page of the iGEM website.
Many more teams have been positive to the idea and began sending us their to-be-translated documents. As our database and the caseload started inflating, we realised that this side-project was a feat that required the assistance of more people. After reaching out for help to some teams that have shown an interest that exceeded some of other teams, we decided to collaborate with NU_Kazakhstan.
During the last months we have met with them online in several instances and laid out a fully fledged strategy concerning the UI of the database and the translator. We furthermore discussed the importance of other means of science communication that would aim to ameliorate the experience of people with less severe sight problems such as color blindness. The latter was a side project that NU_Kazakhstan had already launched and that we decided to expand by translating their already existing color blindness friendly posters in Greek.

During our fully fledged collaboration with NU_Kazakhstan we decided to expand upon our inclusiveness vision in the area of education. For that reason we decided to tag along to an existing NU_K side project that aimed to create educational posters about biological subjects for colourblind individuals. You can see some of these posters below: 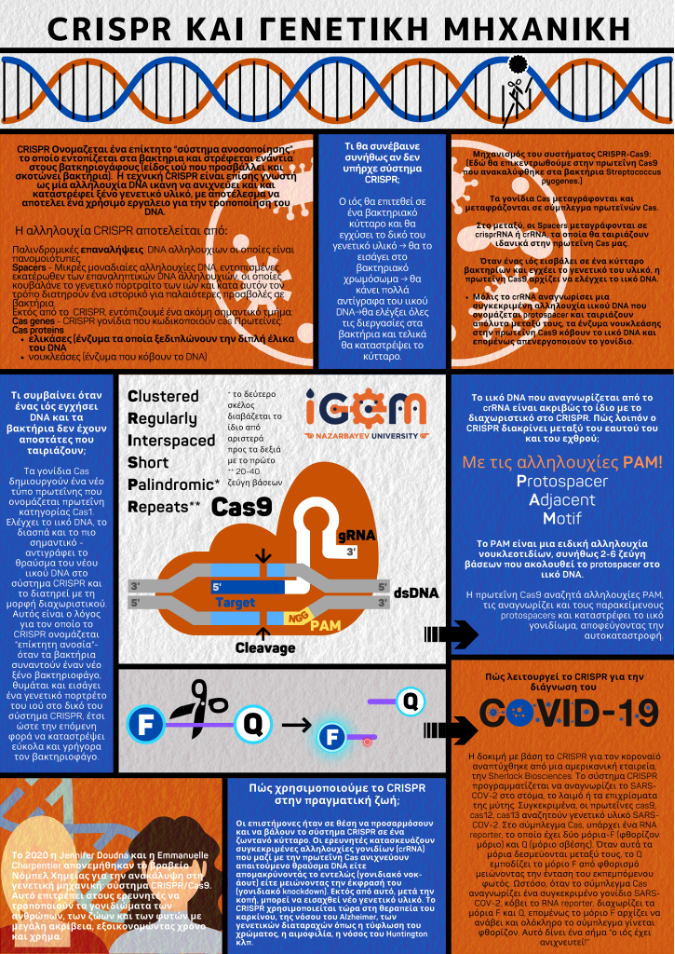 Moreover in collaboration with the same team we helped format and translate a board game regarding synthetic biology and aimed towards high school students. We even had the opportunity to pitch parts of it during our visit to the 5th High School of Heraklion. 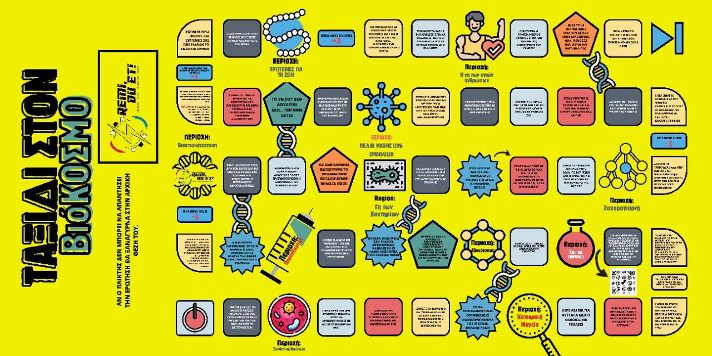 In the end, even though our starting point in the Crete-NU_K collaboration was different, we managed to expand upon our common ideas and create a multi-perspective plan of action that involved specifically made posters(accompanied with audio transcripts of their contents), board games, a braille database and so on.

As mentioned earlier, we felt the need to receive actual feedback on certain components of our approach in Education (e.g the board game) but also felt -in a way- obliged to make synthetic biology and the iGEM Competition known to high school students. For that reason in early October we paid a visit to the 5th High School of Heraklion where we had the chance to converse with students aged 16-18 and familiarise them with the concepts of synthetic biology. In addition, we informed the students about the iGEM competition, the possibility of participating as a high school team next year and our intention to mentor them. The duration of the briefing was 3 hours and was met with great success.
Our feedback showcased that this briefing not only helped students familiarize themselves with the world of synthetic biology but also gave them quite the motivation and inspiration for them to actually join the iGEM Competition next year with us as our mentors! Unfortunately due to the “no phone” and “no pictures” policy of the school, we were unable to capture these extremely rewarding and inspiring moments.