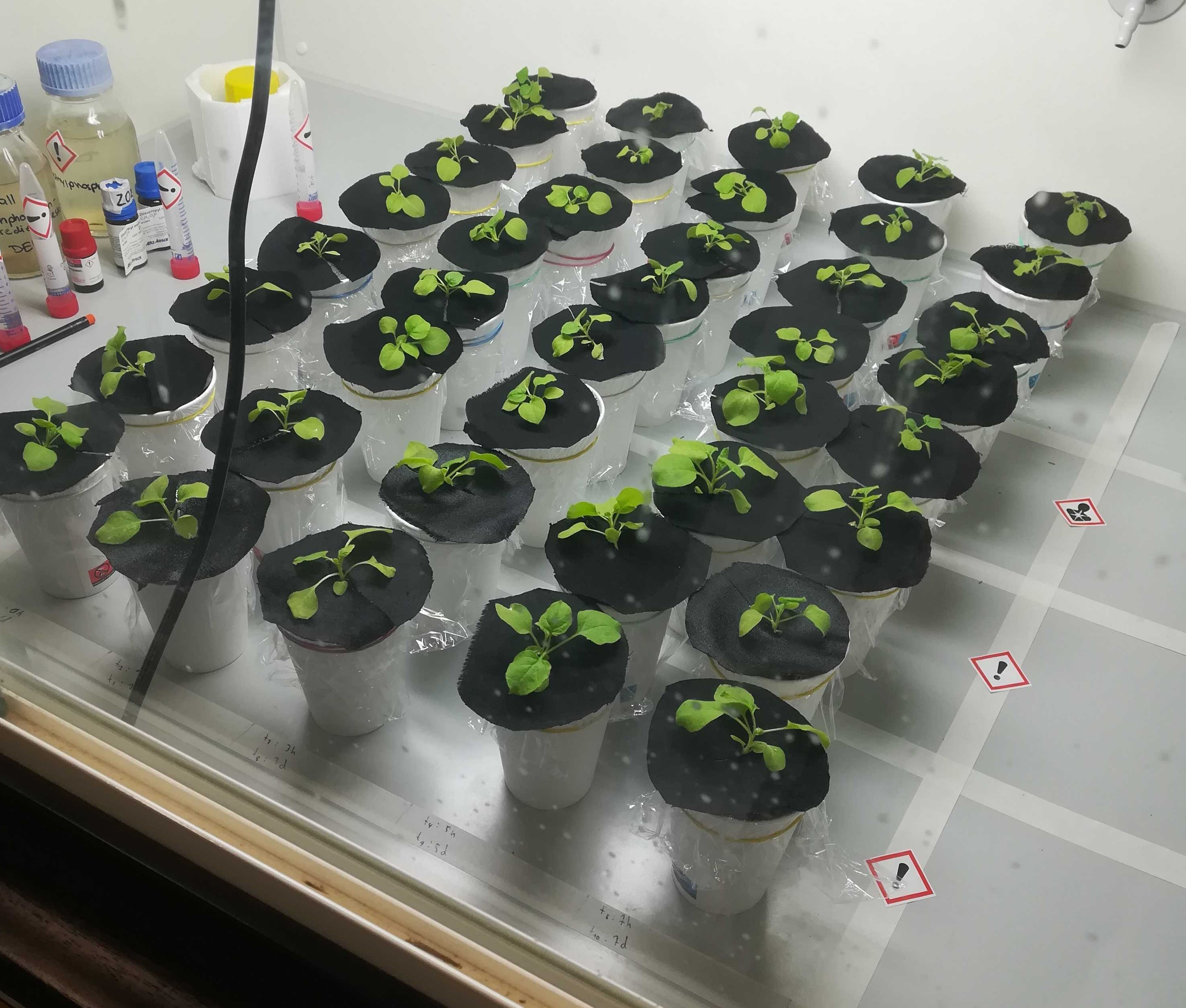 Since our laboratory doesn’t work with plants, we had no equipment for the setup of a hydroculture. Therefore, we chose standard cups as containers for our plants. We filled the cups with expanded clay (little balls of clay as soil, which don’t rot). This makes them perfect to allow growth of our plants. The water in the cups was enriched with commercially available fertilizer to provide the required nutrients. To limit the loss of water by evaporation we covered the cups with thin aluminum foil. We made small holes in the foil to allow for gas exchange. To prevent inhalation of the chemicals, the cultivation took place under a fume hood. After the first hydroculture experiment, we replaced the aluminum foil with standard plastic wrap, due to a possible formation of aluminum salts which can be highly toxic. This minimized the risk to influence the results of the toxicity test with our chemicals. To protect the chemicals from photodegradation, we covered the plastic wrap with an additional layer of black cloth. 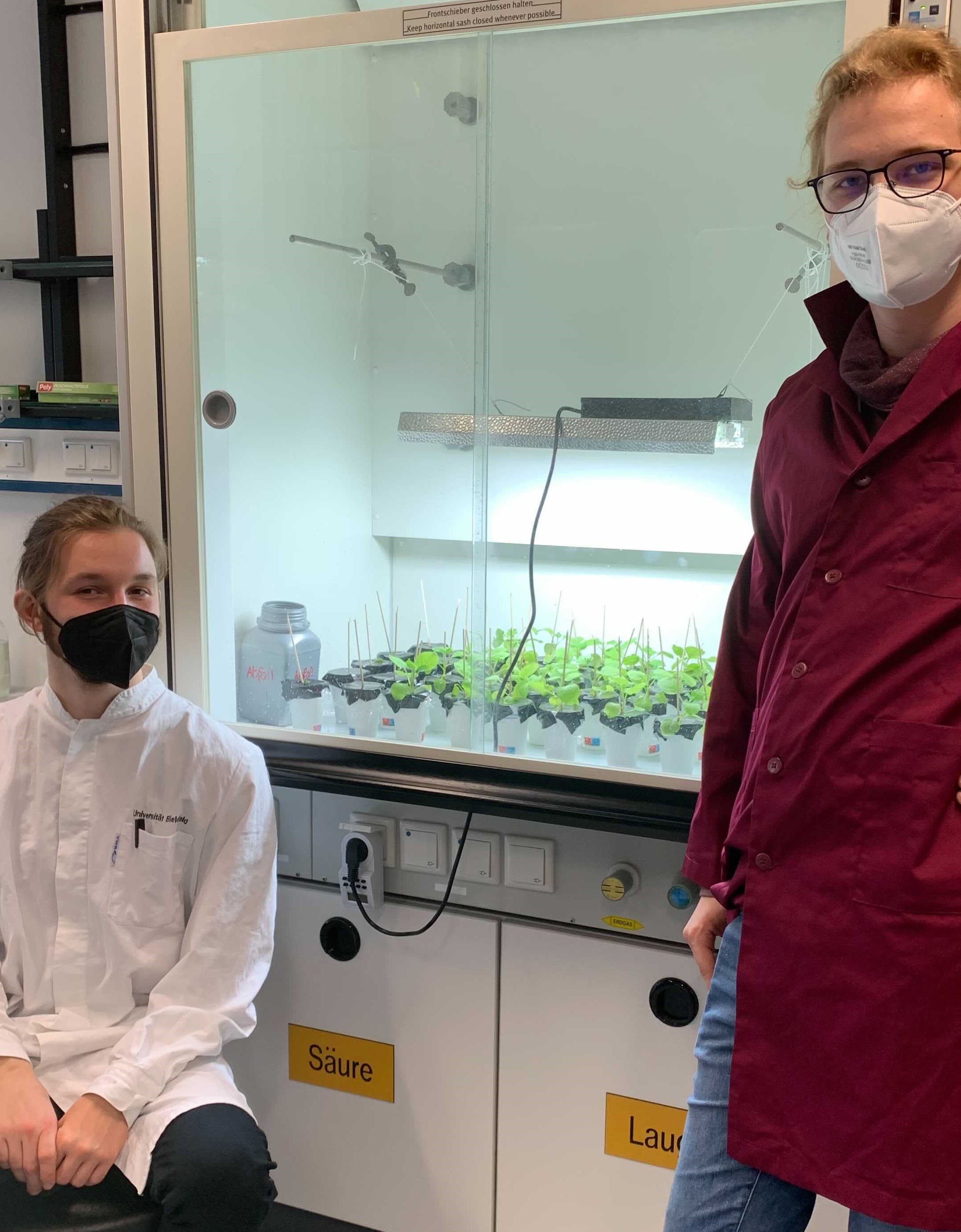 Before testing the actual uptake of our chemicals we had to test if the plants tolerate the chemicals MPA, TDG, DEMP and DIMP in different concentrations. We created stock solutions for our chemicals in saturated solution. We added different dilutions of our stock solutions from MPA, TDG, DIMP and DEMP, so that they had concentrations ranging from 10-2 to 10-7 in the corresponding plant water. A concentration of 75 mM β-Estradiol as a positive control was added to three plants each. β-Estradiol was chosen as positive control, as it is known to be absorbed by plants[1]. We observed the plants for seven days after which there were no visible signs of degradation or harm. From this we concluded that none of the tested chemicals are toxic enough to kill our plants in a close timeframe. 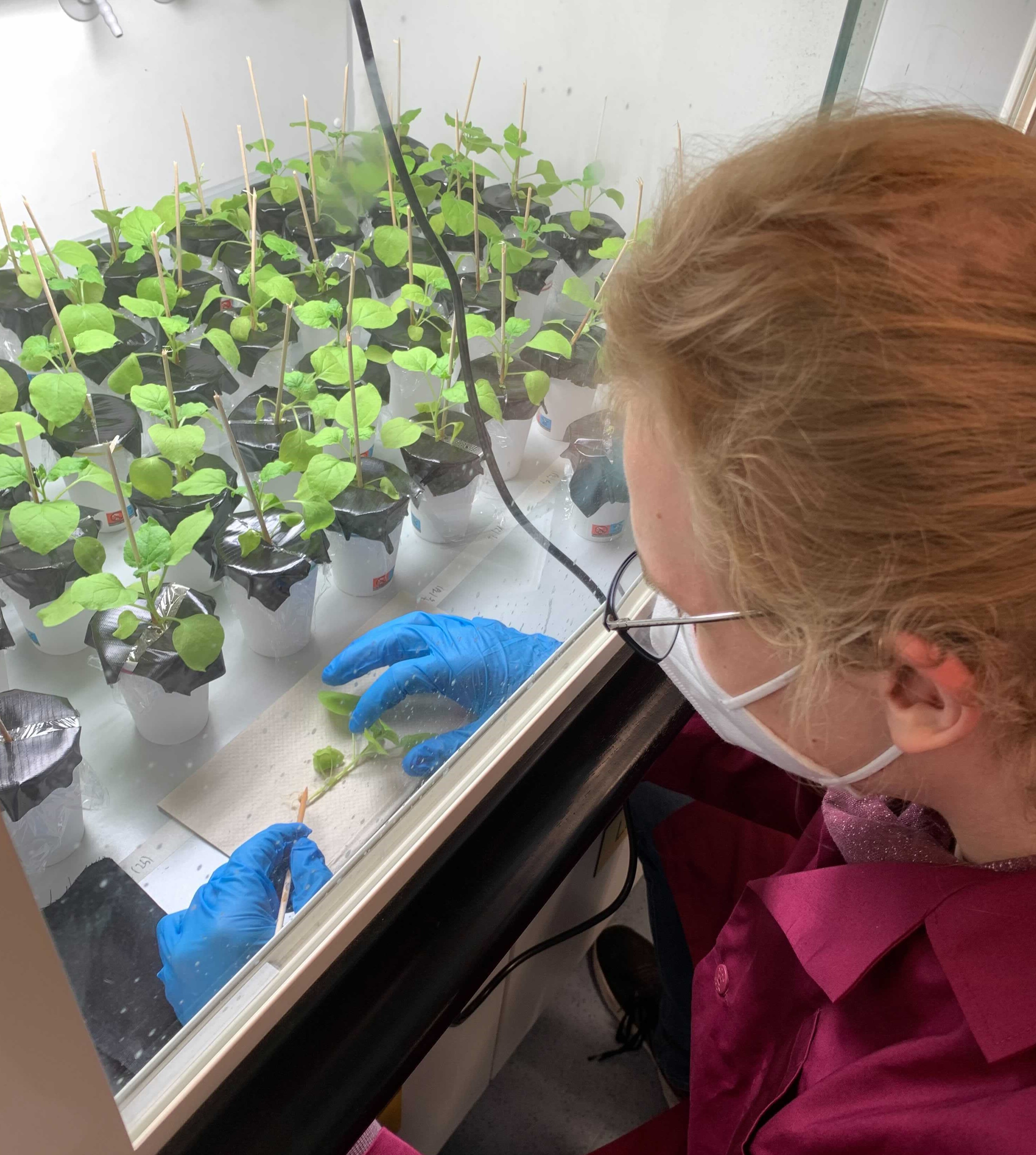 Since we could not test for the chemicals in the plants while they are alive, we supplemented each chemical to ten different plants and harvested them at different time points of cultivation by removing them from the cup and roughly drying them with paper towels. In each cultivation, β-Estradiol was added to ten plants as a positive control for the uptake and ten plants received none of the chemicals as a negative control.

We chose a maximal cultivation time of nine days for our cultivation since in a similar experiment, where the MPA uptake from plants in soil was tested and which showed that a maximal concentration had been reached after nine days[2].

For further analysis of the chemical uptake, we harvested the plants. Due to a shortage of time, the analysis of all different plant compartments was not possible. That is why we removed the plants from the cups and separated the roots from the plants since they probably would be drenched in the chemicals anyway. The samples were shock-frosted in liquid nitrogen and then stored at -20 °C until lyophilization. 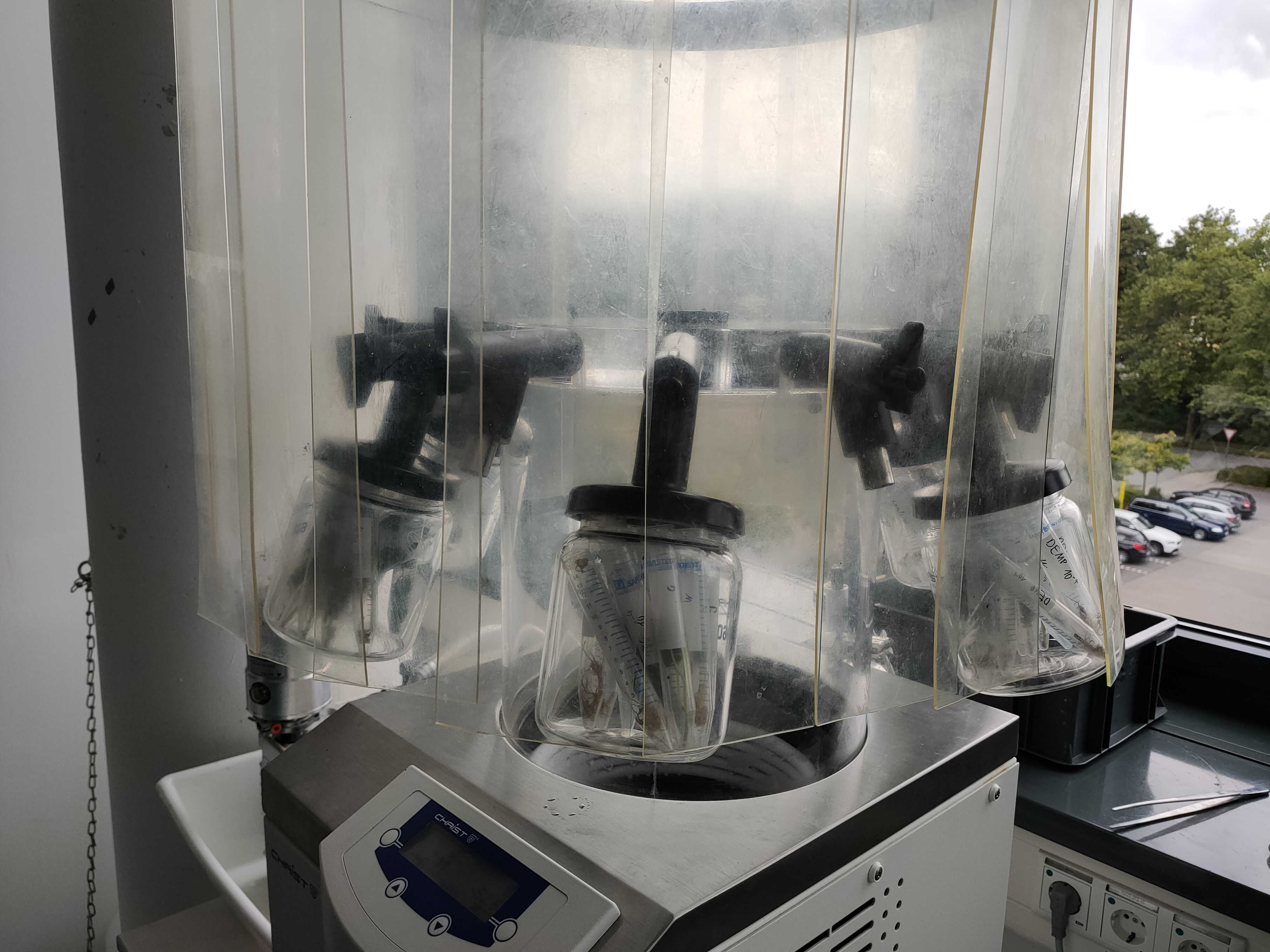 Further analysis by gas chromatography/mass spectrometry (GC/MS) required dry samples, which we conducted by lyophilization. In this treatment, the frozen samples are exposed to extremely low pressures and low temperatures, resulting in sublimation of the samples. The water in the samples converts from a solid to a gas state and omits the liquid state. This stops any degradation processes and enables the samples to be stored at room temperature[3].

To analyze if and how much of TDG, MPA, BTCA, DIMP and DEMP has been absorbed by our plants, we decided to conduct a GC/MS analysis. This technique combines gas chromatography and mass spectrometry and ensures a good separation of the different molecules while also allowing us to test for the concentration of our chemicals.

The first step however was the extraction of the chemicals from our samples. For cell disruption, we used a ribolyzer with 1 mm zirconia beads on 7 mg of the sample and extracted the cell content with 80% methanol. As an internal standard, 100 mM ribitol in methanol was used. After the extraction, the methanol had to evaporate again leaving all solid components behind. Unfortunately, this extraction method is, as we tested, not applicable for DIMP and DEMP. They evaporate both during the lyophilization and the extraction process, making them much harder to detect with GC/MS. Due to a shortage of time and very limited options, we decided against an optimization of the extraction process for these samples and concentrated on the analysis of the samples which were treated with TDG, MPA and BTCA. 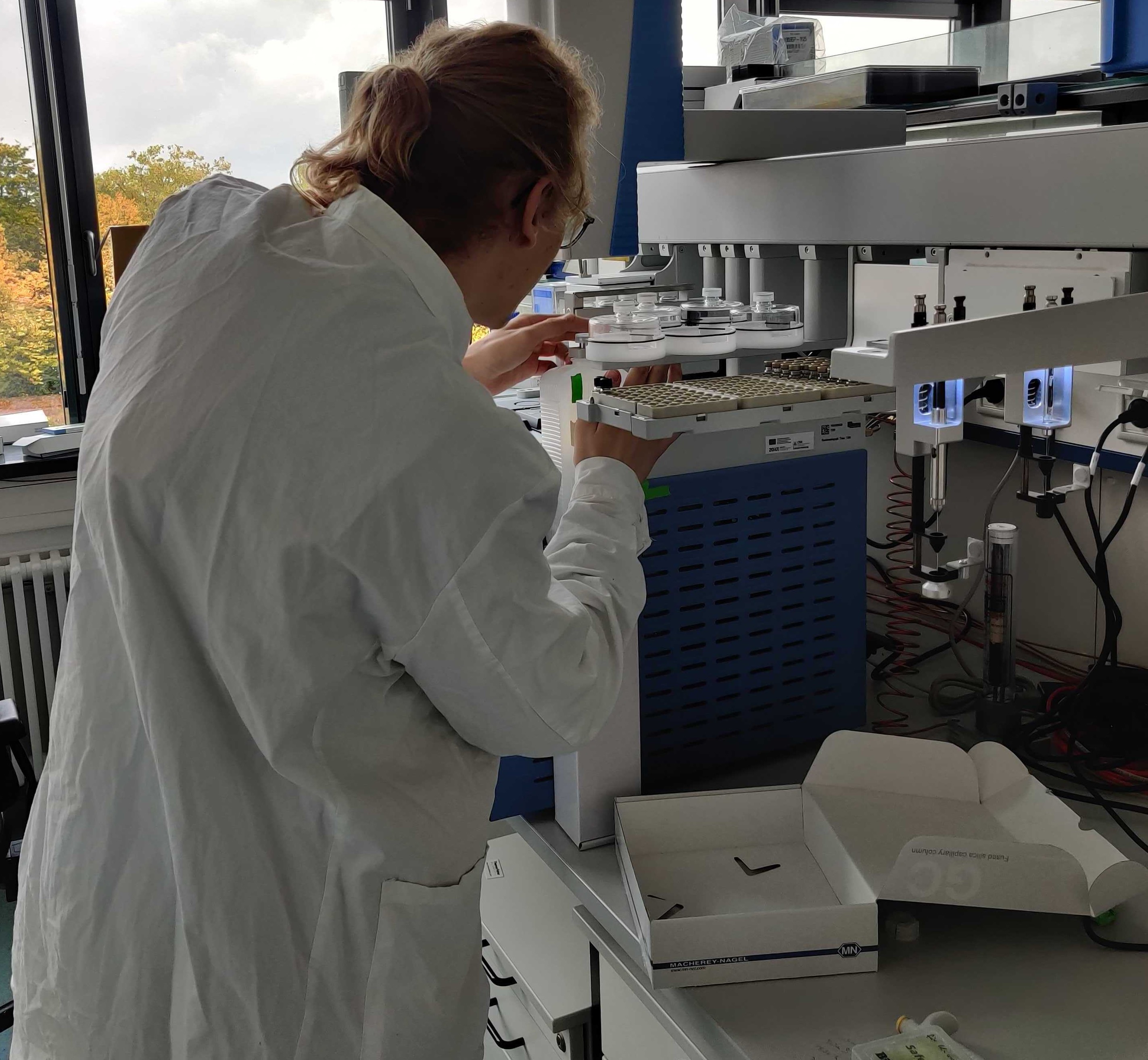 In the gas chromatography, the sample is slowly heated, and separation is achieved due to different boiling points of the chemicals.

For gas chromatography to work the desired chemical has to boil at the used temperatures and remain stable in the process. This means, a derivatization must be conducted where certain functional groups are replaced[4]. This changes the properties of the derivatized chemicals which has to be considered when interpreting the data.

We used N,O-Bis(trimethylsilyl)trifluoroacetamide (BSTFA) to replace acidic hydrogen and methoxyamine hydrochloride (MeOX) to replace aldehyde groups. Both in a concentration of 1 mM and solved in pyridine.

The gas chromatography is directly followed by a mass spectrometry. Here, the chemicals are ionized and then accelerated in a vacuum by an electric field, where chemicals are separated by their mass-to-charge ratio, commonly known as m/z.

While it is possible that two chemicals have the same retention time GC or the same m/z in the MS it is very unlikely for two chemicals to be identical in both. This makes GC/MS a suitable method for the analysis of TDG, MPA and BTCA from the Nicotiana benthamianas samples. . 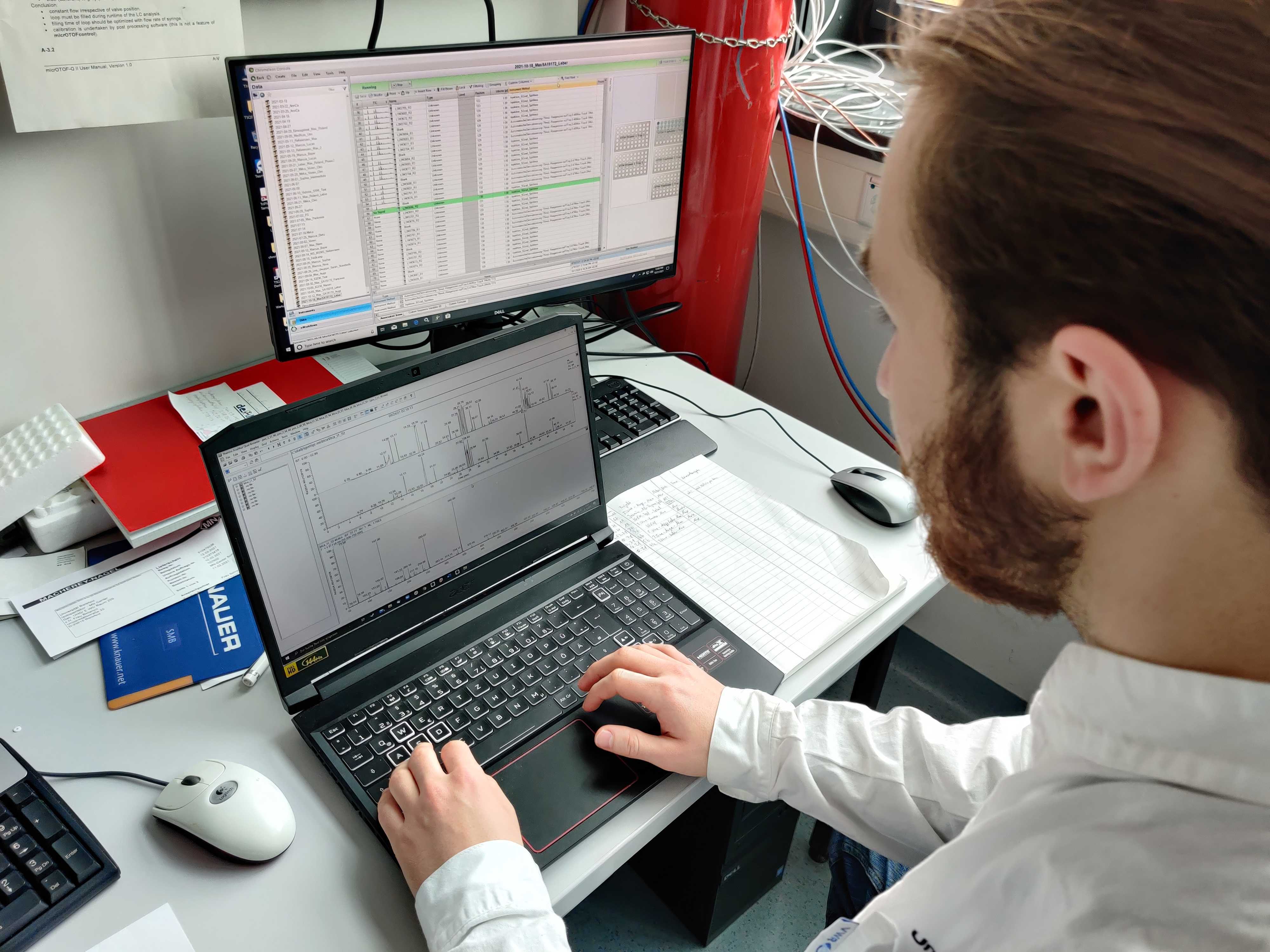 The GC/MS results in a chromatogram with different peaks for different chemicals at specific retention times. The area of these peaks can be compared and referred as abundance but is also proportional to a concentration. To compare these abundances of the chemicals between different plants, we set it in relation to the internal standard ribitol, by division of the area of the relevant peak and the area of the ribitol peak. Since the used chemicals were used in different saturated concentrations as stock solutions, ranging from 65 mM for BTCA to 9,66 M for TDG, we divided the determined abundance with the used concentration to obtained a normalized abundance. (Here you come to our methods) 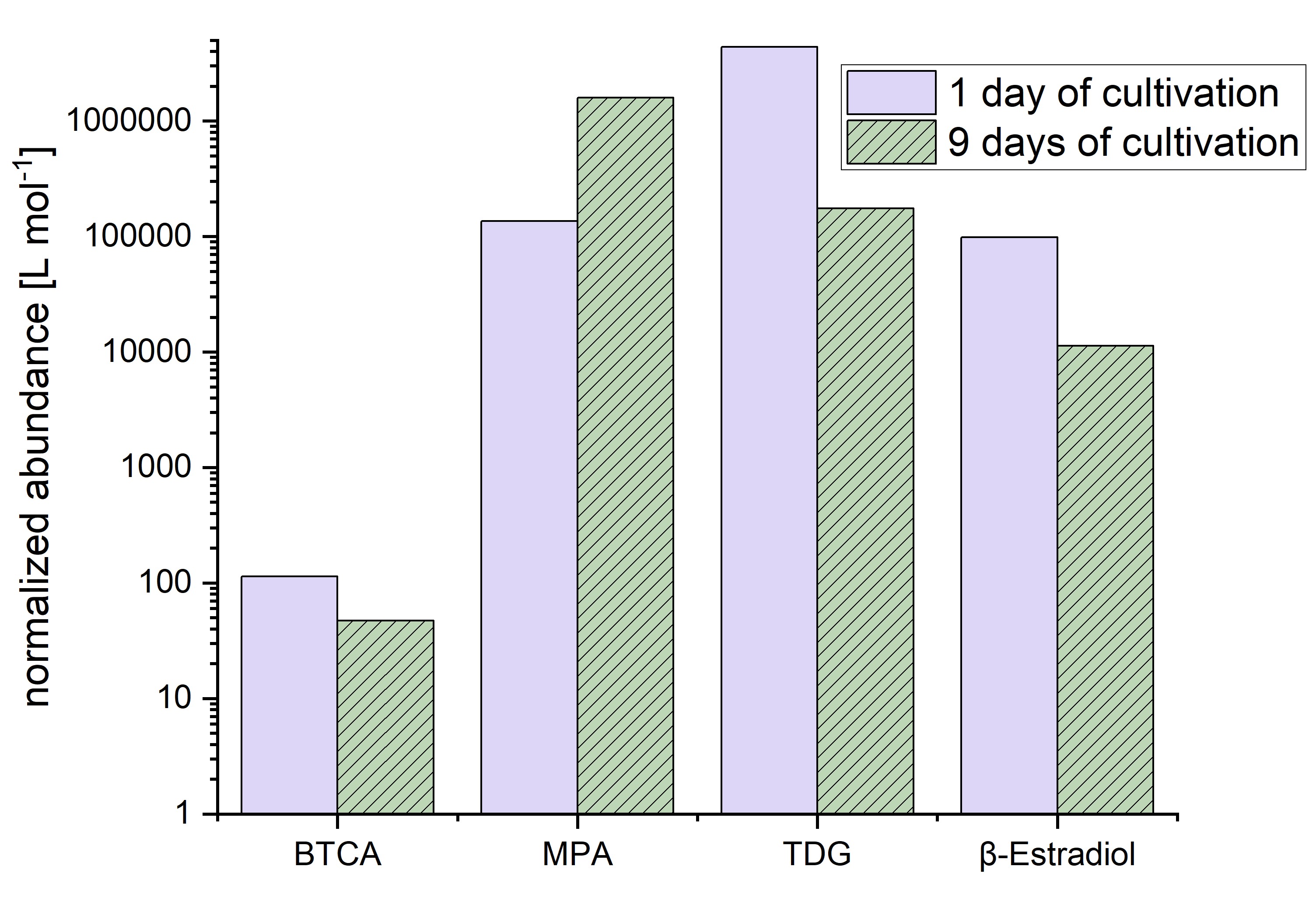 Figure 1: Analysis of BTCA, TDG, MPA in plants after 1 and 9 days after addition using GC/MS. The peak area is normalized on the corresponding maximal amount of added chemical. β-estradiol was used as a positive control for the uptake through soil. 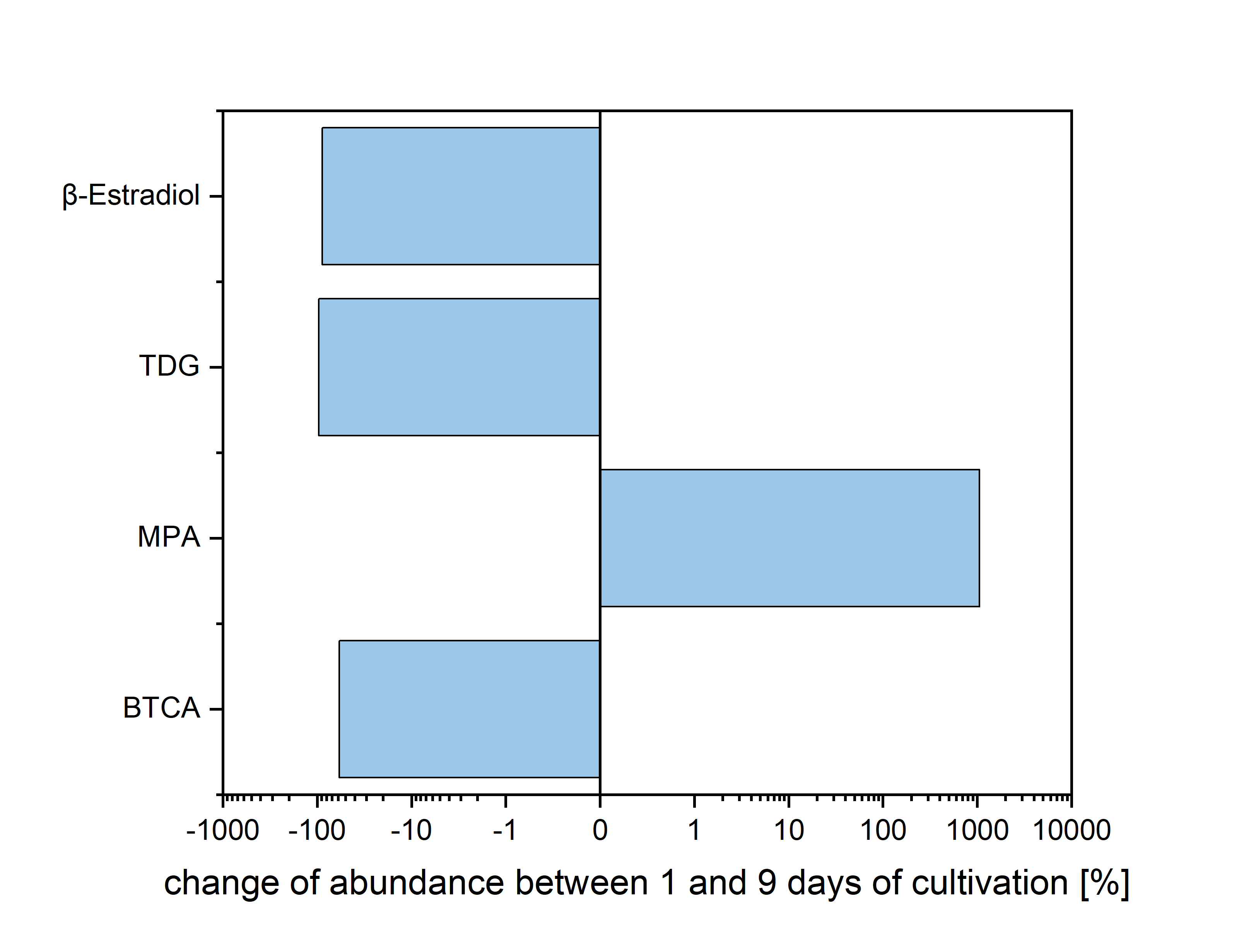 Figure 2: Percentual change of detected abundance for BTCA, TDG and MPA between 1 and 9 days of cultivation. β-estradiol was used as a positive control for the uptake through soil.

When comparing the detected maximal intracellular BTCA concentration to different times of cultivation, its proportion declines by over 60% between the maximal concentration 1 day after addition and the end concentration after 9 days. TDG content also declines, but faster than BTCA, of approximately 96% of the maximal uptake in the same timeframe. Even after 9 days of cultivation intracellular MPA content is still increasing, reaching 1000% higher content after 9 days than after 1 day. This could be reasoned with the limited amount of chemical in solution. 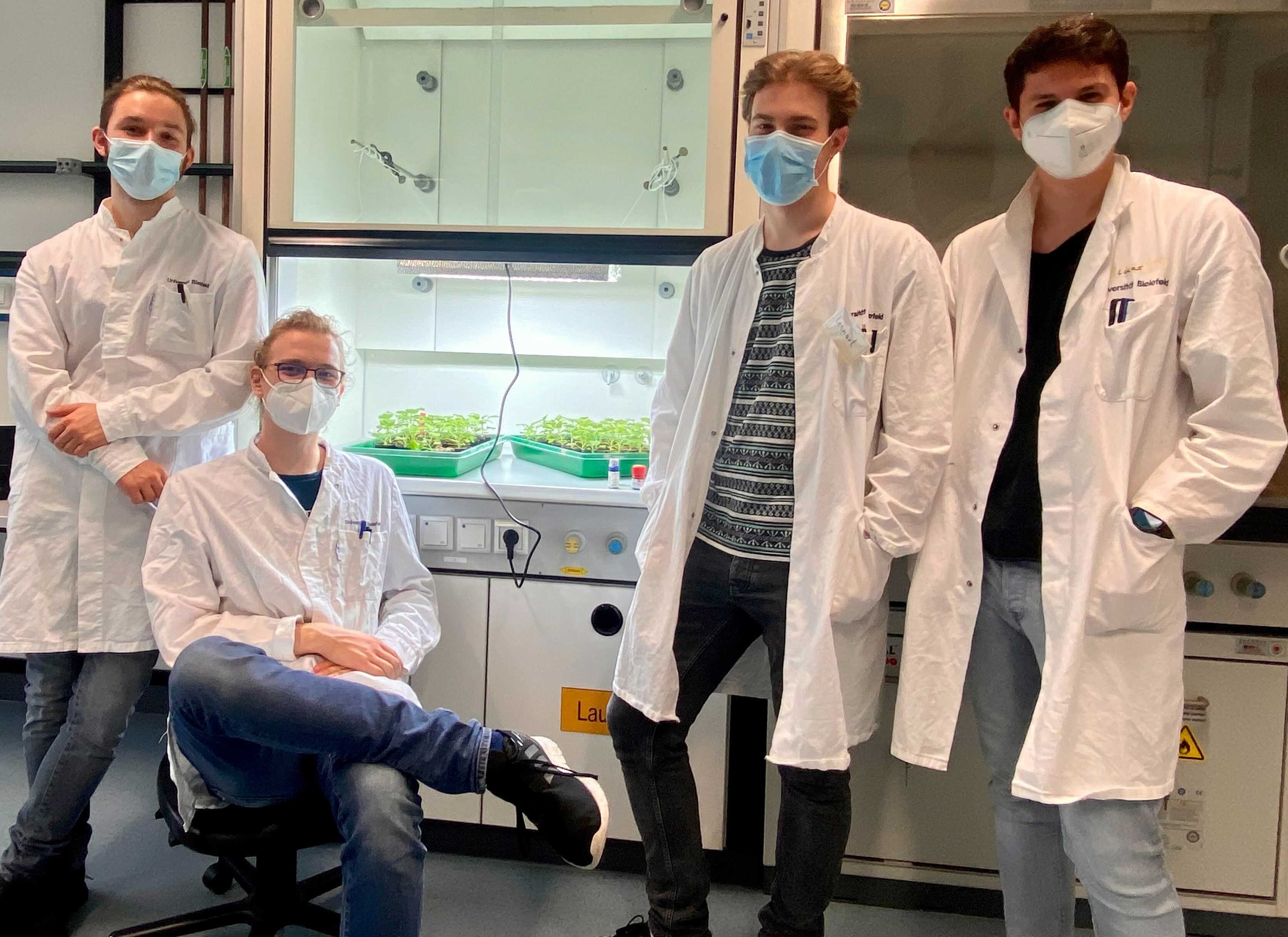 In conclusion, we showed that DIMP, DEMP, TDG, MPA and BTCA are not lethal for the plants in different concentrations. We analyzed their uptake by the determination of the intracellular levels by GC/MS. Unfortunately, the uptake of DIMP and DEMP could not be tested, but we showed that TDG, MPA and BTCA can be absorbed by Nicotiana benthamiana and are detectable even after 9 days of cultivation. This proofs, that these chemicals are absorbed from the plants and thus have the potential to activate our plant-based detection system.

[4] Ruiz-Matute, A. I. et al. The freezing step in lyophilization: Physico-chemical fundamentals, freezing methods and consequences on process performance and quality attributes of biopharmaceuticals Journal of Chromatography B 879 (17-18), 1226-1240 (2011).