A year full of communication with experts


In order to develop our project idea and achieve our goal to create a plant-based detection system in the best possible way. During our whole iGEM year we talked to various experts and had lots of different discussions which helped us to tackled obstacles within the design and its realization.

Our final result: P.L.A.N.T. - Plant-based Ligand Activated Noxious agent Tracker - a plant based detection system for chemical degradation products. In a future world, when GMO plants can be released in Europe, P.L.A.N.T. can be placed at suspected contaminated sites and then indicate the presence of these chemical weapon degradation products by shifting its colour from green to red.

From an idea to a project


Our journey started with a first rough idea: We want to develop a plant based chemical detection system with a strong visual output.
Based on this idea we developed the following two possible application scenarios in which sensor plants could be an ideal solution:

One possible application for a biosensor system are crisis areas in which attacks with chemical weapons are possible. In our opinion, our comprehensive and cost-effective detection method could help to ensure rapid identification of the warfare agent after attacks and thus facilitate targeted care for victims. In addition, specific evidence would help to clarify the incident if the parties involved deny the employment of such weapons. If the detector plant is sufficiently widespread and its existence well known, this could even prevent attacks. Due to the obvious change in color of the plants, an evaluation would also be easily possible for lay people. The phenotypic change would last for weeks after the attack.

In this case the idea would be to use the response of plants to environmental agents in more specific and sensitive ways across the board for early detection of planned attacks. This could be implemented, for example, in the form of ornamental plants planted by cities or private individuals. These plants take on an unusual and conspicuous coloration in the event of contact with the substance in question. This could be extended to parallel detection of multiple substances, even within the same plant. Evaluation of these detection systems could be done by lay people who want to use them to protect themselves, or by city employees. It could also be used to follow up on specific suspicious cases if it is known that there are corresponding plants in the vicinity.

But then, during our research, we came across an invisible hazard distributed throughout Germany, where the use of our plant can have a significant impact.

A dangerous threat that needs a perfect solution 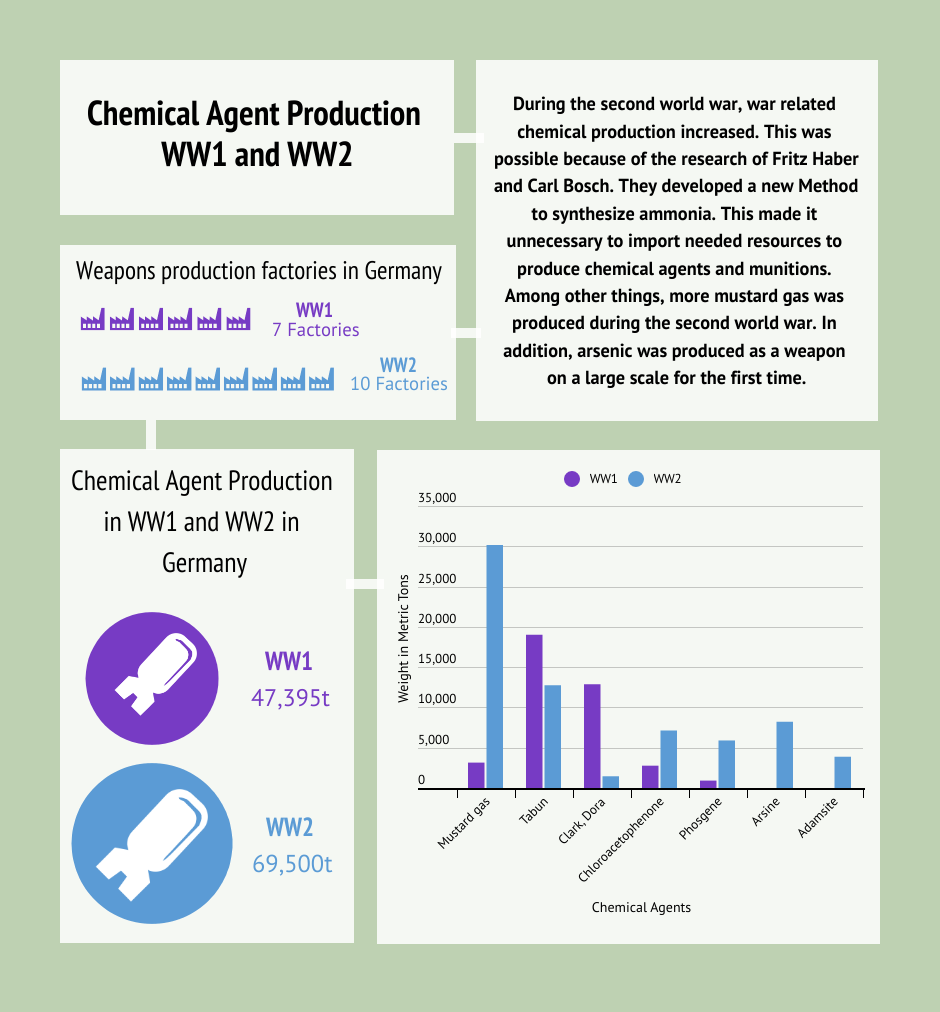 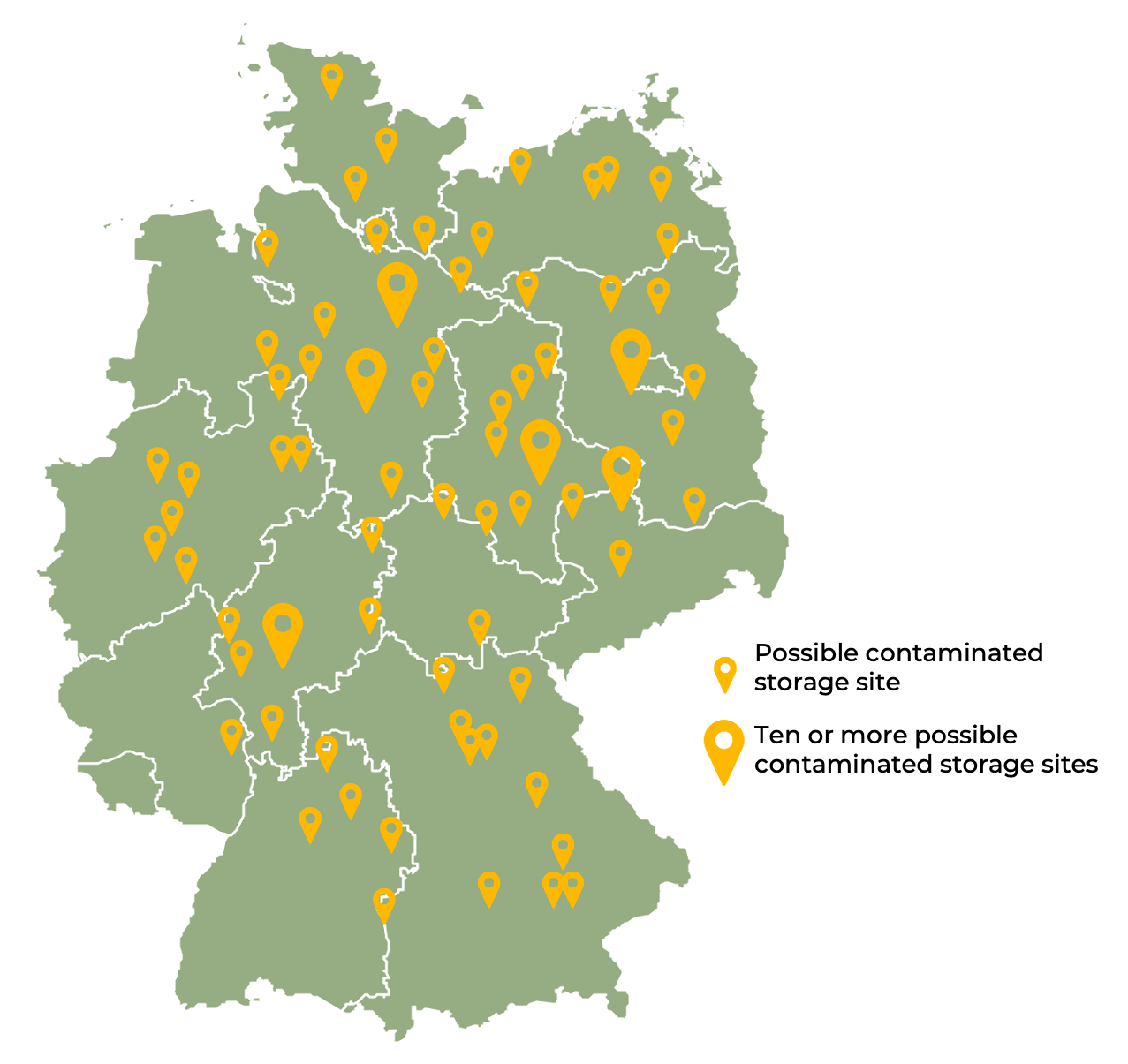 However, tracing these possible storage sites is difficult because the exact location of a wide variety of hazards cannot be clearly determined. These hidden chemical weapons are an invisible threat to the environment and human health. We made it our mission to solve this problem. We wanted to create a cost efficient and easy to use detection system with large area coverage to easily identify these contaminated sites. [2]
P.L.A.N.T. - our plant based chemical weapon degradation product detection system with a bright red visual output is the perfect solution for this problem.


Since an important aspect of our project is working with chemical warfare agents, we needed to assure the safety of our team, but also of our environment, as well as proper and safe handling of the toxins. Therefore, we met Tessa Alexanian and Piers Millett from the iGEM Safety Committee as well as Peter Hotchkiss from the OPCW (Organization for the Prohibition of Chemical Weapons) in an online meeting. With Peter Hotchkiss, we discussed the hazardous and toxicity of the chemicals we chose to work with and if it is safe for us to work with them.
In this meeting we discussed the safe handling of hazardous chemicals during our iGEM project as well as proper storage. We were also able to talk to Peter Hotchkiss about the feasibility of our sensor plant application. He confirmed to us that most degradation products from chemical weapons accumulate in soil over a period of time. Thus, these could be absorbed by the roots of plants. We also discussed the possible detection of chemicals in gaseous form via air and that this would be the most realistic way of detection for our application scenarios. In this case, the detection of chemicals that are both precursors and simulants would be useful.

Our visit at Hazard Control GmbH


To understand the currently used detection methods and its drawbacks for the analysis of contaminated sites, we contacted Alfred Krippendorf. He is a chemical engineer, owner of Hazard Control GmbH and a leading chemical weapons disarmament expert in Germany. He invited us to visit him at his company, which we gladly accepted, leading to our trip to Visselhövedeat. 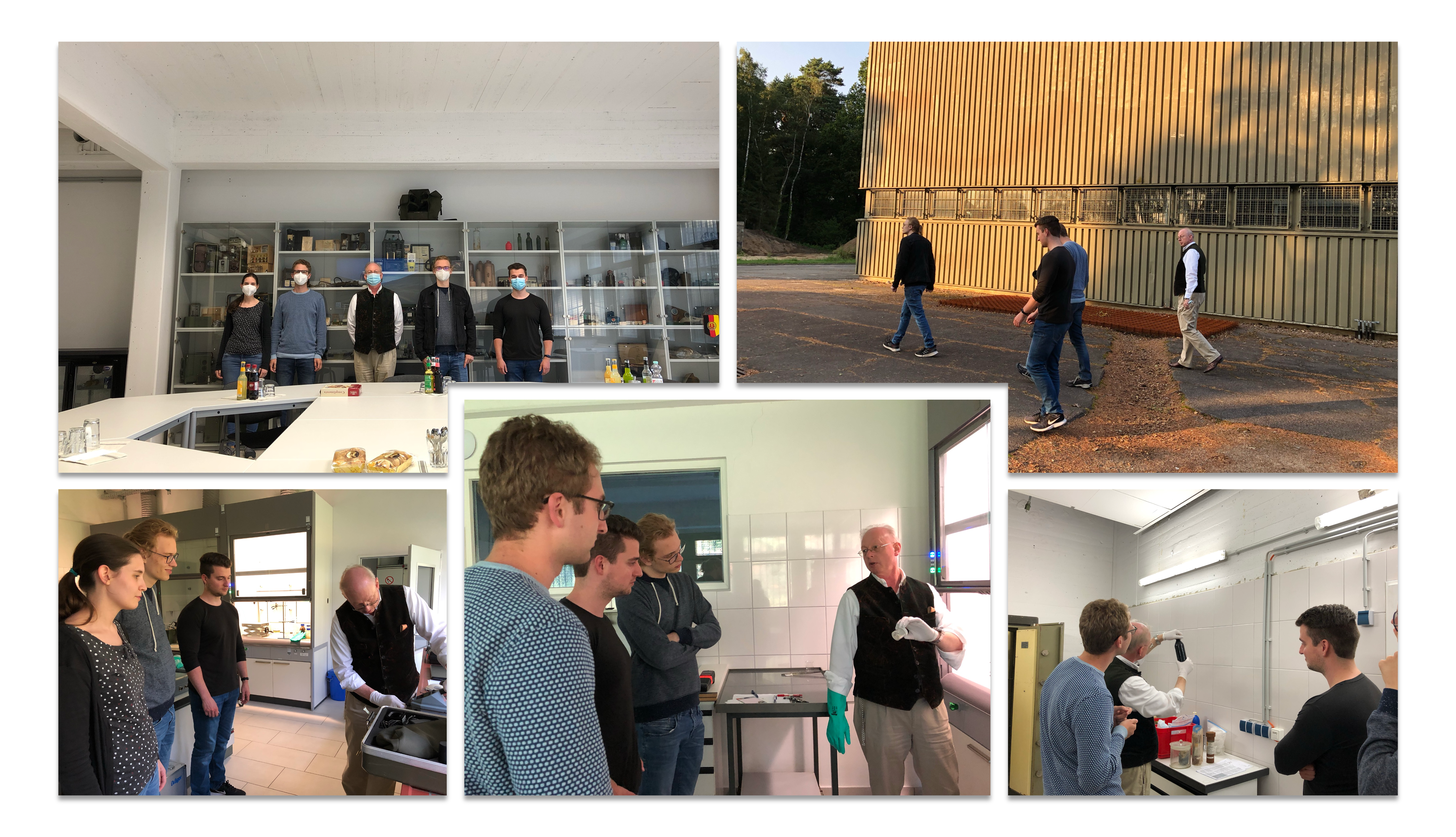 After he showed us the premises of Hazard Control GmbH, we talked to him about the major degradation products of chemical weapons, where they are assumed and possible still can be found in the soil at storage sites. These and other chemicals are detected by flame photometers and portable mass spectrometers according to current standards. Alfred Krippendorf had these instruments on site and showed us how they are used and discussed with us its limitations. He also showed us how contaminated samples are analyzed by gas chromatography. We got important insights in the modes of action and the horrific symptoms after being exposed to the chemical weapons used in WWI and WWII. We were affirmed that our plant-based detection system can be a useful application for an easy and widespread detection of those chemicals. He confirmed that our P.L.A.N.T. would have significant advantages over conventional detection methods. Some chemicals cannot be detected in soil samples with these. Here, our plant with the ligand-specific receptor would be a solution.
The meeting with Alfred Krippendorf helped us to identify three major factors for an optimal detection method of hazardous chemical, which until now, no technical equipment is capable of:
● Coverage of a large radius
● Easy to use without the need for extensive training
● Strong and easily detectable signal in the presence of degradation products of chemical weapons


Our solution: P.L.A.N.T. - Plant-based Ligand Activated Noxious agent Tracker - a plant based detection system for chemical degradation products. In a future world, when GMO plants can be released in Europe, P.L.A.N.T. can be placed at suspected contaminated sites and then indicate the presence of these chemical weapon degradation products by shifting its colour to red.
Most of our team members never worked with plants in the laboratory so initially we needed a lot of input concerning our opportunities. Therefore, we talked to many experts in this field.
By using the input of the Experts we worked out the following concept:
We wanted to adapt an already existing rezeptor for detecting TNT and combine it with a signaling cascade that leads to a reporter which is able to color leaves red. To do this, we had to think about how to design the receptor ligand specifically and what our reporter signal should look like. The detection system is based on a signaling cascade which is activated when the particular chemical is bound by a receptor. We had to tackle one major difficulty: There was no receptor which could specifically bind our chosen chemicals.
We decided to approach the receptor design, based on an existing TNT receptor, in two different ways. One was computational design and the other one was directed evolution by using Darwin assembly.


For the receptor design with Rosetta we got an introduction from Maximilian Edich (PhD student at Hamburg University) who taught us how to use EvoDock and discussed his approach to protein design with us. Using EvoDock has been a huge time saver for us, as the algorithm tries to create variants in combination rather than individually.
We learned in the communication with Rocco Moretti (Research Professor at Vanderbilt University, USA) that Rosetta does not explicitly consider pi-stacking. In addition, we got tips on which Rosetta score function to use for which task so we can optimize our receptor design.
We discussed with Dr. Venkata Vamsi (Postdoctoral Researcher at Munster Technological University, Ireland) different tools for protein design. He confirmed that Rosetta is suited for our project and talked about how a protein design workflow with Rosetta should look like. He further suggested, to also consider I-TASSER and AutoDock Vina as alternatives. Thereupon we used AutoDockVina to compare whether our predicted docking of our receptors remains consistent across different programs.
To test the functionality of the modeled receptors, we are using different test systems. As a first step, we tested them in bacteria (Escherichia coli) because of less complexity and faster growth. Afterwards As a second step, we planned to test them in tobacco (Nicotiana benthamiana).


Regarding the output signal of the plant-based detection system, we had to decide on the reporter. Our first choice was RUBY, an already established betalain-based reporter. J.-Prof. Dr. Boas Pucker explained that RUBY could cause a metabolic imbalance because betalain synthesis is not naturally occurring in tobacco. Wild type Nicotiana benthamiana is not capable of betalain synthesis. Thus, preventing false-positive activation of the RUBY reporter by endogenous betalain production. However, the introduction of betalain synthesis might cause a harmful metabolic imbalance. Thanks to the input of J.-Prof. Dr. Boas Pucker (Braunschweig University) and Dr. Ralf Stracke we also worked on an anthocyanin-based reporter, to avoid this imbalance.


Another important aspect besides the selection of the chemicals we want to detect is to figure out if Nicotiana benthamiana can take up these chemicals and which concentrations of the chemicals the plants can tolerate.
We decided to test the recommended chemicals by hydroculture. For an optimal experimental setup we talked to Andrea Voigt (Research group genetics and genomics of plants, Bielefeld University). She grew the tobacco plants we needed for our experiments. She also advised us that it would be best to first grow the tobacco plants for three weeks in sand, in order to be able to transfer them easier to hydroculture with as little residue as possible.
For the analysis of our samples, we used gas chromatography–mass spectrometry (GC/MS). For the sample preparation. We got assistance from Dr. Marcus Persicke who supervised us on the sample preparation. For the use of the GC/MS we got a detailed introduction and protocols from Victoria Goedde. In addition, we were supported by Prof. Dr. Karsten Niehaus by optimizing the experimental setup to track traces of chemical weapon degradation products in our hydroculture plants. Thus, we were able to show that tobacco plants can absorb the selected chemicals via the roots.
During these exchanges with the experts, further ideas for the use of our system in a sensor plant were formed. For example, a use for the remediation of soil with plants would be conceivable. For that, one could examine if plants take up the chemical weapon degradation products and accumulate them. One could also develop a solution, where the plants process the accumulated substances into harmless products. The general question if plants take up weaponized chemicals and how long the chemicals remain inside the plants, could also help to investigate the use of chemical weapons after a terrorist attack. One possibility for new applications would be to replace the specific receptor of the signaling cascade. This would allow the detection of additional chemical contaminants, for example pesticides, heavy metals, pollutants or explosives.


[1] PREUSS, J. The Reconstruction of Production and Storage Sites for Chemical Warfare Agents and Weapons from Both World Wars in the Context of Assessing Former Munitions Sites. (2017)
[2] Friedrich, B et al. One Hundred Years of Chemical Warfare: Research, Deployment, Consequences. (2017)