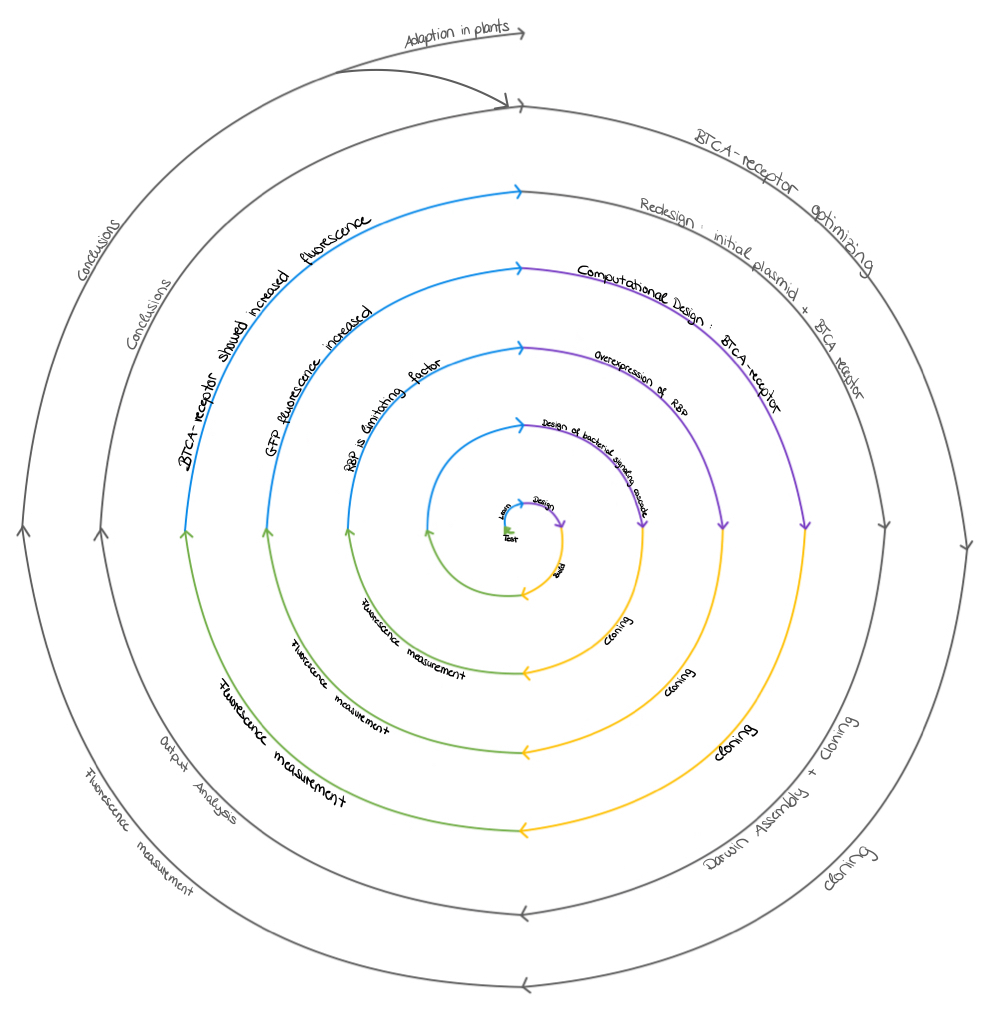 Synthetic biology is a branch of biology in which biological systems are engineered to reach a priorly defined goal. Consequently, engineering principles are applied for an effective development. One of the basic principles is the engineering cycle, that is composed of 4 stages: Design, Build, Test, Learn. Once the topic is selected and extensive research was performed, a conceptualization phase must be conducted before the design cycle is entered. In this phase the overall goals are specified, inputs and outputs are defined. For our project we had 5 main goals.


The inputs were defined as the chemical weapon degradation products or simulants, that bind to our computationally designed receptors. The output for bacteria was specified as GFP and for the subsequent integration in tobacco as RUBY or ANTHOS.
To achieve the goals, we used the principles of the engineering cycle. In the initial cycle we started by selecting the genetic parts for our signaling cascade and by designing a single plasmid, that had to be cloned into E. coli DH5α in the building stage of the first cycle. Subsequently we tested the signaling cascade by cultivation with glucose and ribose, ligands of the galactose/glucose binding protein (GBP) and the ribose binding protein (RBP) respectively. The receptors were expressed endogenously in E. coli. The cultures were analyzed on the GFP fluorescence and confirmed by confocal laser scanning microscopy, the output we defined beforehand. A low but visible fluorescence was detected. The fluorescence output for RBP was higher than for the GBP tests. Higher concentration of additives does not lead to a higher output. From this we learned, that the RBP is a more suitable receptor for subsequent experiments and suspected, that the RBP expression might be a bottleneck in the signaling cascade, because GFP expression did not increase with increasing concentrations of the inductor. With the ending of the first cycle, we reached the goal of establishing the signaling cascade in bacteria.
Since we learned that expression of RBP seems to be a limiting factor, we decided to overexpress it in a second cycle to optimize the signaling cascade and accomplish the second goal. In the design stage, we designed a plasmid for overexpression of RBP. The plasmid was built and co-transformed with the signaling cascade into E. coli BL21(DE3). In a cultivation experiment with supplemented ribose as the ligand, we measured the fluorescence and determined, that the fluorescence increased significantly after overexpression of RBP. We learned, that RBP expression was in fact a bottleneck of the signaling cascade. The second goal of optimizing the signaling cascade was therefore reached and the second cycle completed. Furthermore, we obtained clearly differentiable GFP signals, we could base the next experiments on.

In the third cycle we tested our computationally designed receptors. We designed two plasmids for overexpression of the BTCA-receptor and the DIMP-receptor, that were also used for expression of receptors for in vitro testing. The plasmids were built and co-transformed with the signaling cascade into E. coli BL21(DE3). With fluorescence measurements we confirmed that the addition of BTCA resulted in a higher fluorescence of the cultures with the BTCA-receptor overexpression than in the cultures with the RBP overexpression. The overexpression of the DIMP-receptor led to no difference increased fluorescence intensity and therefore could not be shown to be functional to bind DIMP. 3D deconvolution widefield fluorescent microscopy and super resolution 3D-structured illumination microscopy confirmed that we were in fact measuring GFP fluorescence from the engineered bacteria. From this we learned, that the BTCA receptor seems to have a higher affinity to BTCA than to ribose and a higher affinity to BTCA than RBP. This was a proof of concept for our project, marked the end of the third cycle and the accomplishment of the third goal.

Due to time constraints, we were not able to continue with further cycles. In a fourth cycle we would have redesigned the plasmid from the first cycle and would have integrated the computationally designed receptors. These plasmids would have been constructed and cloned into E. coli. Fluorescence measurements could have been performed as before.