Fluorescent proteins play a crucial role as biomarkers and biosensors that can be utilized in a wide array of scenarios like the visualization of living cells, the depiction of the interaction between two proteins or to elucidate the fate of a single molecule[1]. The goal of our project is the development of an adaptable plant-based biosensor that can to detect a variety of chemicals. For detection the chemicals are bound by a reengineered periplasmic binding protein that subsequently binds a transmembrane receptor and activates a signaling cascade, resulting in the expression of reporter genes. We deployed a green fluorescent protein as a reporter gene to visualize the functionality of our signaling cascade in Escherichia coli .

mRUBY3 is a monomeric red fluorescent protein with an excitation maximum at 558 nm and emission maximum at 592 nm, which was evolved from mRUBY2[4]. mRUBY3 is characterized by its high brightness and photostability and comparatively established performance in mammalian cells[4] and therefore is widely used as Förster resonance energy transfer (FRET) acceptor or for localization studies [3,5]. With an pKa of 4.8 however it lacks a reliable stability in the lysosome, that has a pH of 4 to 5. Therefore, it is not suitable for applications like retracing of internalization pathways through the lysosome[3,6]. Because of mRUBY3s already favorable traits, an enhancement of the pH stability is beneficial for further applications.

For engineering a fluorescent protein´s ability to emit light upon excitation at a certain wavelength, with a definite intensity or even at given conditions, the focus is on altering the chromophore. The chromophore is formed in a post-translational self-modification of three amino acids inside the rigid β-barrel structure of the fluorescent protein. By oxidation, the amino acids are cyclized. This reaction results in a chromophore which properties are dictated by the amino acids forming and surrounding it[8].

For mRUBY3 it has been shown that through decisive changes in the surrounding of the protein’s chromophore an enhanced pH stability can be achieved. This improved fluorescent protein was named mCRISPRed (Part: BBa_M50009) . The mutations P146A, N147D, T162L, and I164R ensure, that mCRISPRed´s chromophore is locked in the cis isomerization through physical exclusion and hydrophobic interaction throughout pH 2 to 11, while the chromophore of mRUBY3 switches from cis to trans isomerization around pH 5, resulting in the loss of fluorescence[9].


To improve mRUBY3s (Part: BBa_M50009) pH stability, we changed four amino acids according to mCRISPRed (Part: BBa_M50009) and analyzed its fluorescence intensity on pH sensitivity. Therefore, we expressed both proteins in E.coli BL21 DE3, purified the proteins by immobilized metal ion affinity chromatography (IMAC) and detected the relative fluorescence intensity at different pH conditions using the TECAN Infinite M200 plate reader.
Click on the boxes below for a detailed description of the experiments! 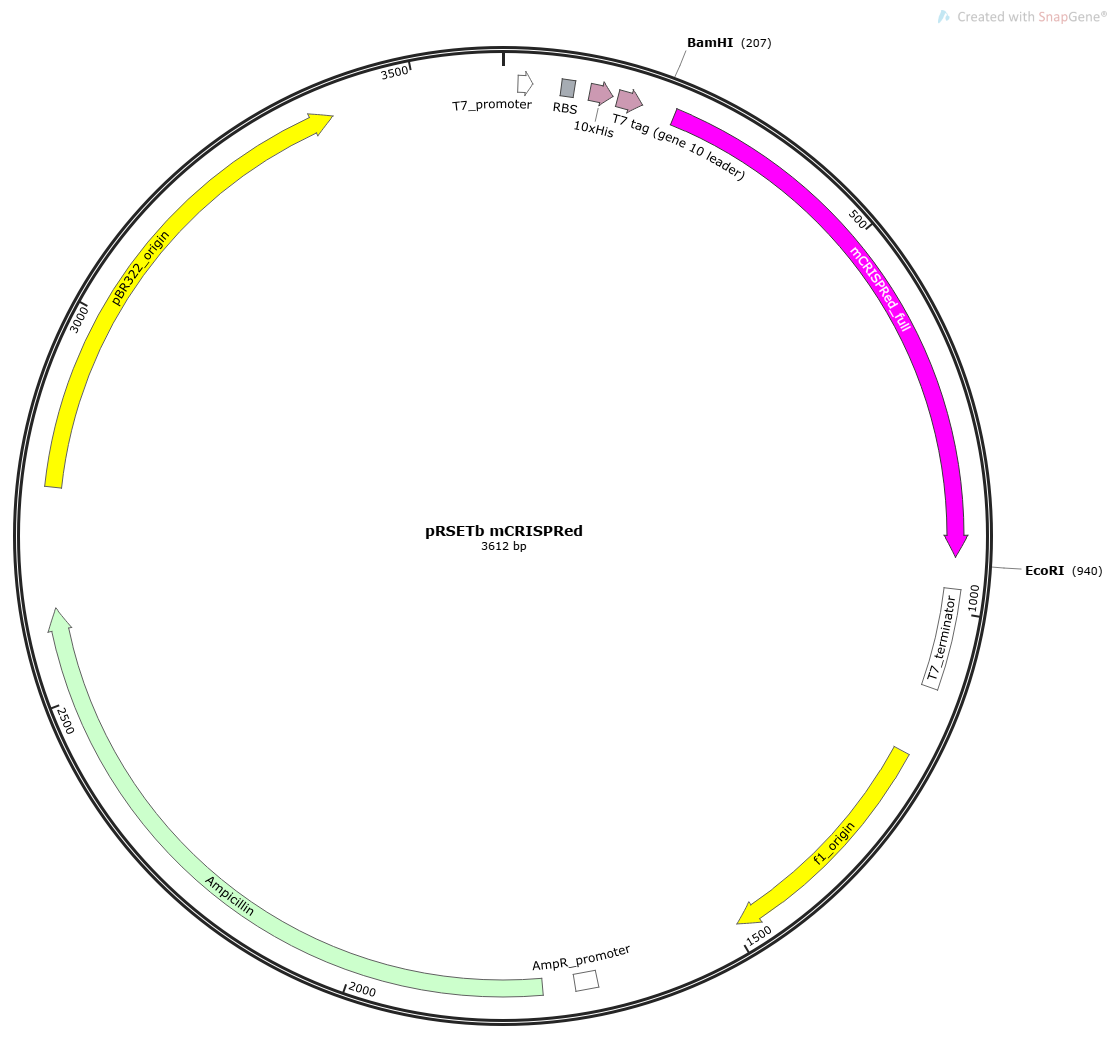 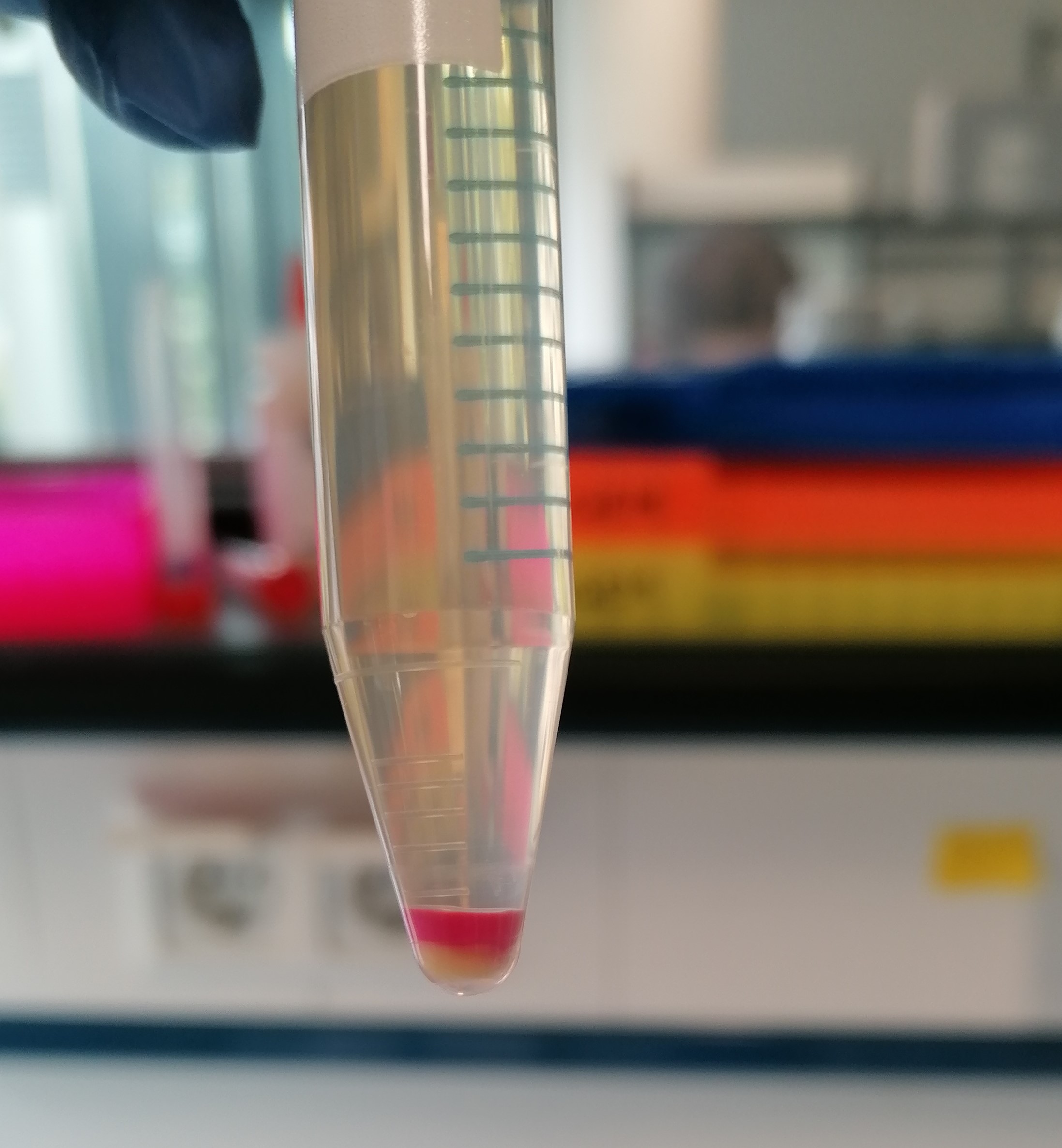 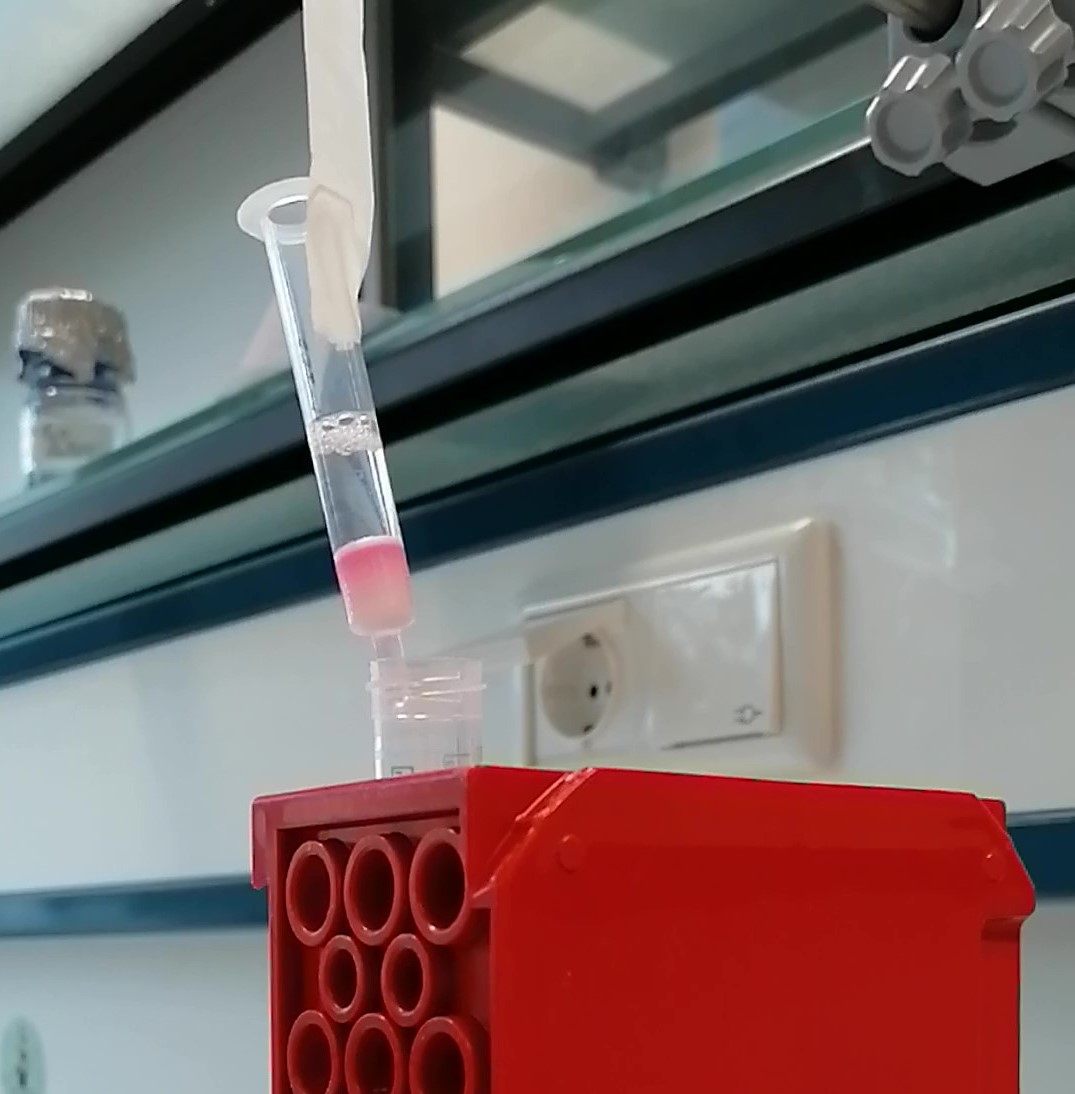 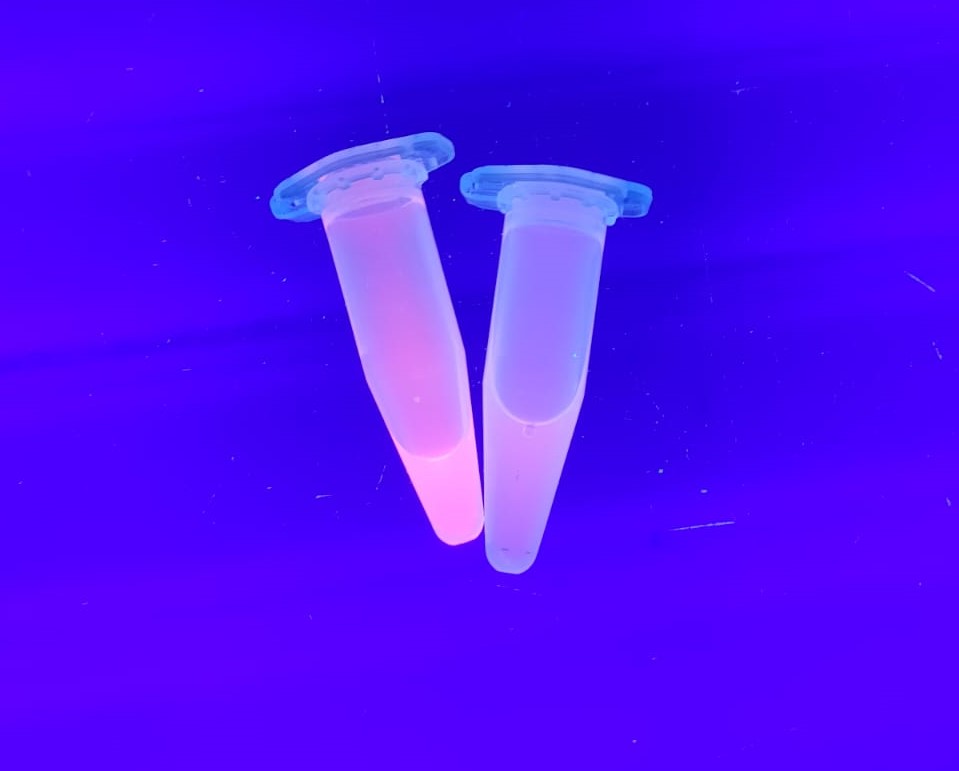 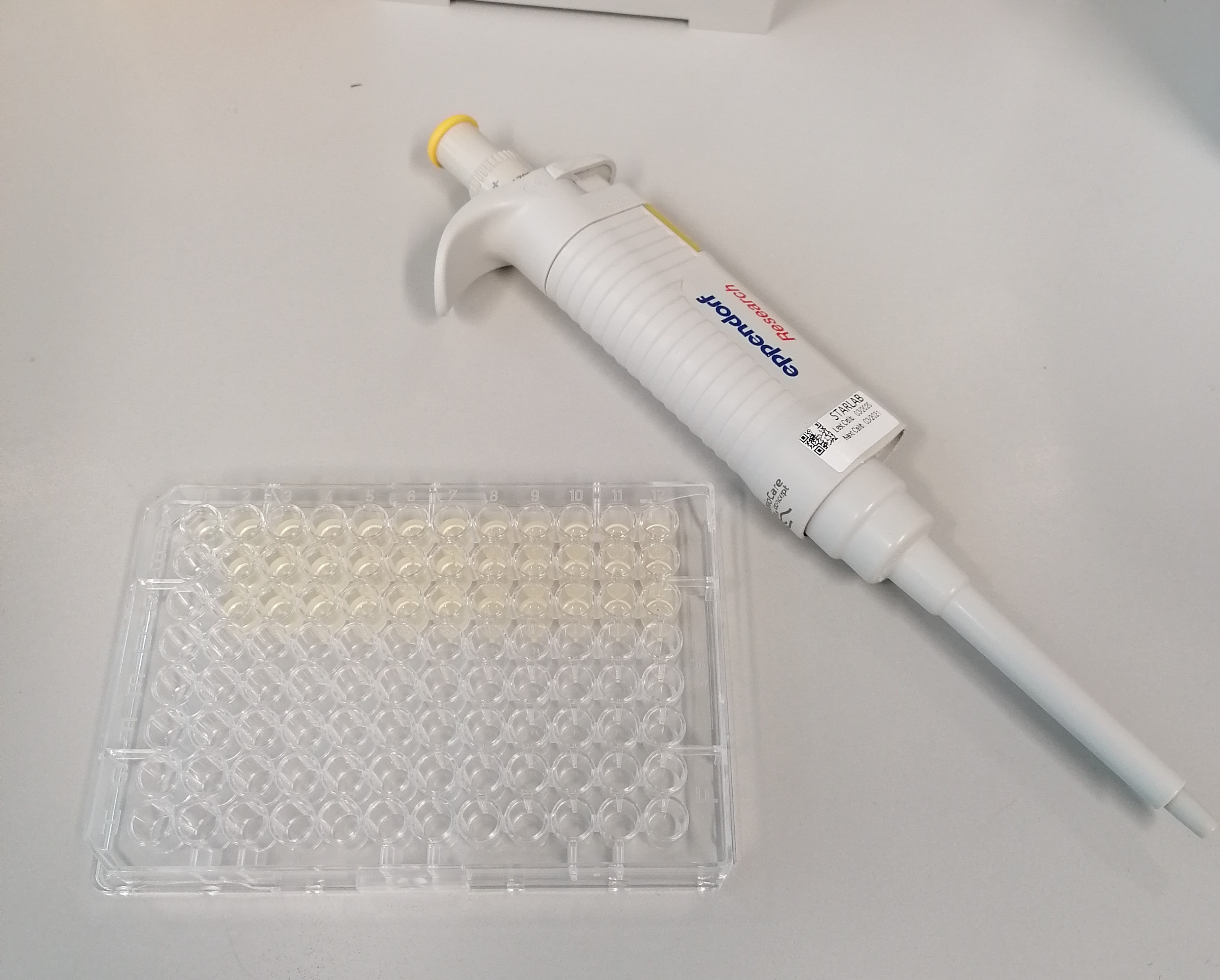 Figure 2: Relative fluorescence intensity measured for mRuby3 and mCRISPRed for different pH conditions ranging from pH 7.4 to pH 2 at the TECAN reader. Significance of differences was proven with one-sided t-test for unrelated samples (n=27) and are displayed as * for p > 0.05, ** for p > 0.01 and *** for p > 0.001.


The results show a significantly better relative fluorescence at low pH conditions for mCRISPRed in comparison to mRuby3, indicating an improved stability of the chromophore in its cis-isomeration. With our improvement of mRuby3 we enable future iGEM teams to utilize the potential of fluorescence proteins when working in acidic environments.