Model
Model
The figure shows how number of ampicillin resistance protein changes with rhamnose concentration. The more the rhamnose concentration is, the more ampicillin resistance proteins will be synthesized
Since it is challenging to analyze and calculate elementary reaction that involves form and break of covalent bonds, we separate the reaction into two sections, one with covalent bonds change while the other without, and analyze the latter section. All elementary reactions except the binding of the first hydroxyacyl-ACP with enzyme have covalent bond change. Also, the structure of initial enzyme-substrate complex(IESC) usually influences the following elementary reactions and therefore influences the rate of enzyme activity. Therefore, we aim to improve the structure of IESC before the enzyme process to achieve our goal.

Figure.1 elementary steps of catalytic reaction between rhlA and two hydroxyacyl-ACP. (Dulcey et all., 2020)
We first use docking( a method that can predict the preferred orientation of molecules when they bound to each other, and therefore can be used to reveal the initial binding structure of enzyme and substrate) to reveal the initial enzyme-substrate complex of wild rhlA and hydroxyacyl-ACP, the result are shown in figure 2.

Figure. 2 initial binding structure of rhlA(green) and hydroxyacyl-ACP(red)
During the second elementary reaction in rhlA enzyme catalytic process, after the first hydrocyacyl-ACP binds to rhlA, His251 will deprotonate Ser102, which will be activated and performs “nucleophilic attack” on the carbonyle carbon, which will make the oxygen atom on the carbonyl group have 1 negative charge, thus create the oxygen ion. This would result into an enzyme-substrate complex with respective tetrahedral intermediate(with a carbon as center atom) stabilization for later catalysis. An oxyanion hole also exist (see https://en.wikipedia.org/wiki/Oxyanion_hole) with its shape as a pocket, , which can stabilize the transition state of the Serine during the process. Based on Figure. 3, we find that A101 and A38 are two non-polar amino acids that are close to the carbonyl group. We hypothesize that mutations on A101 and A38 that change them into polar amino acids may help on the function of oxyanion hole. For if they’re both polar amino acids, they would be able to hold oxygen, and therefore, tighten the hole. Thus, Our first trial is to mutate A101 and A39 into two polar amino acids.

Figure.3 the carbonyle group(red with dotted line) on substrate(green) and A101 and A38(orange).
Second, while the head of the hydroxyacyl-ACP is non-polar, T47 and D255, two amino acids close to the head, of threonine and Aspartic are both polar. Based on the theory of like-dissolves-like, we infer that if T47 and D255 can be mutated to non-polar amino acids, then the head of hydroxyacyl-ACP will bind tigher with the enzyme.

Figure. 4 hydroxyacyl-ACP(green) and D255 and T47(violet)
We test the first theory. The distance between the enzyme and its substrates in the initial enzyme-substrate complex has been proved to be related to enzyme activity according to the result in “An alternative view of enzyme catalysis” by Fredric M. Menger. Therefore, we measured the distance between the substrate and the enzyme in the binding complex for each mutated enzymes by computer.
Result 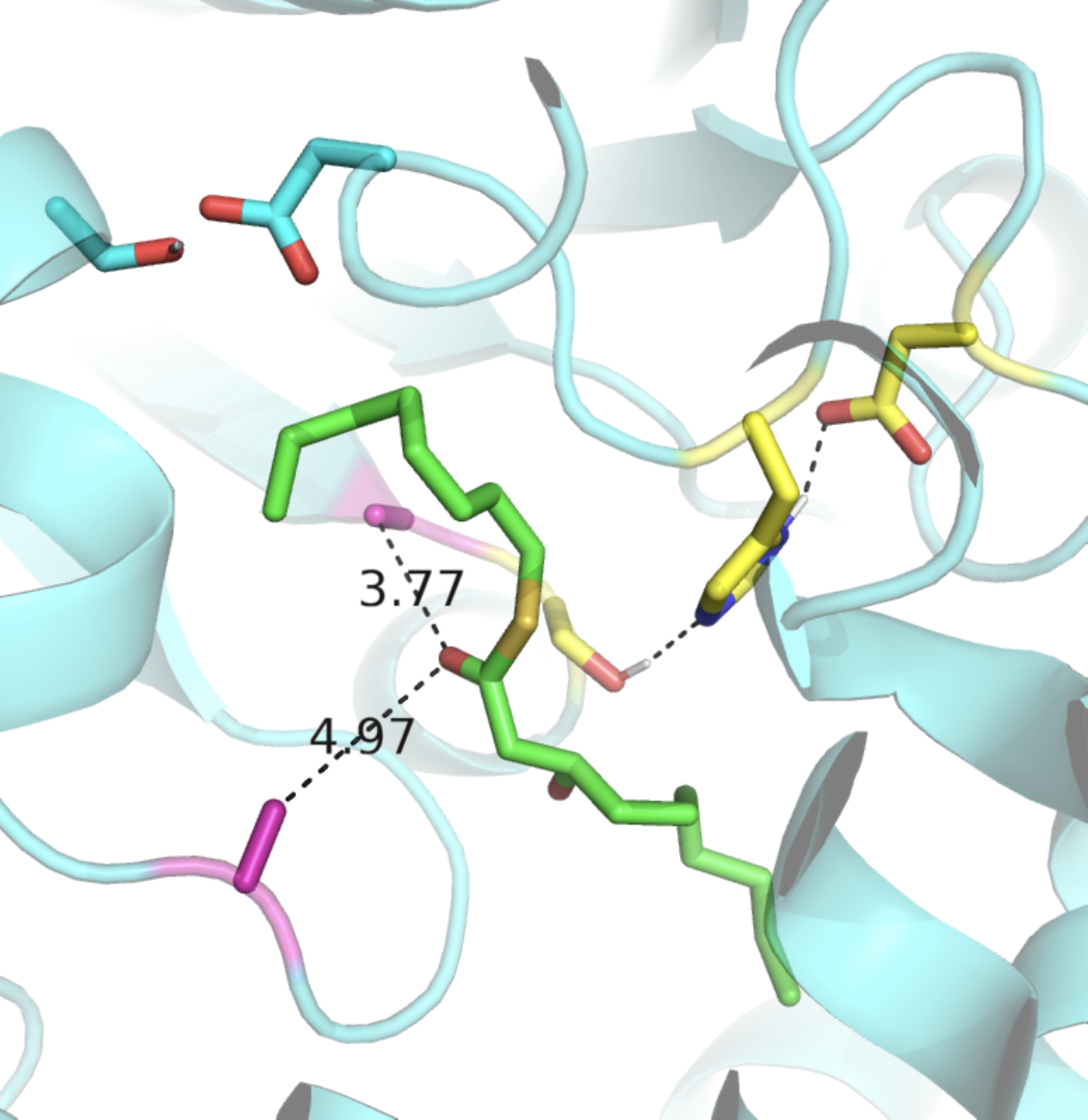 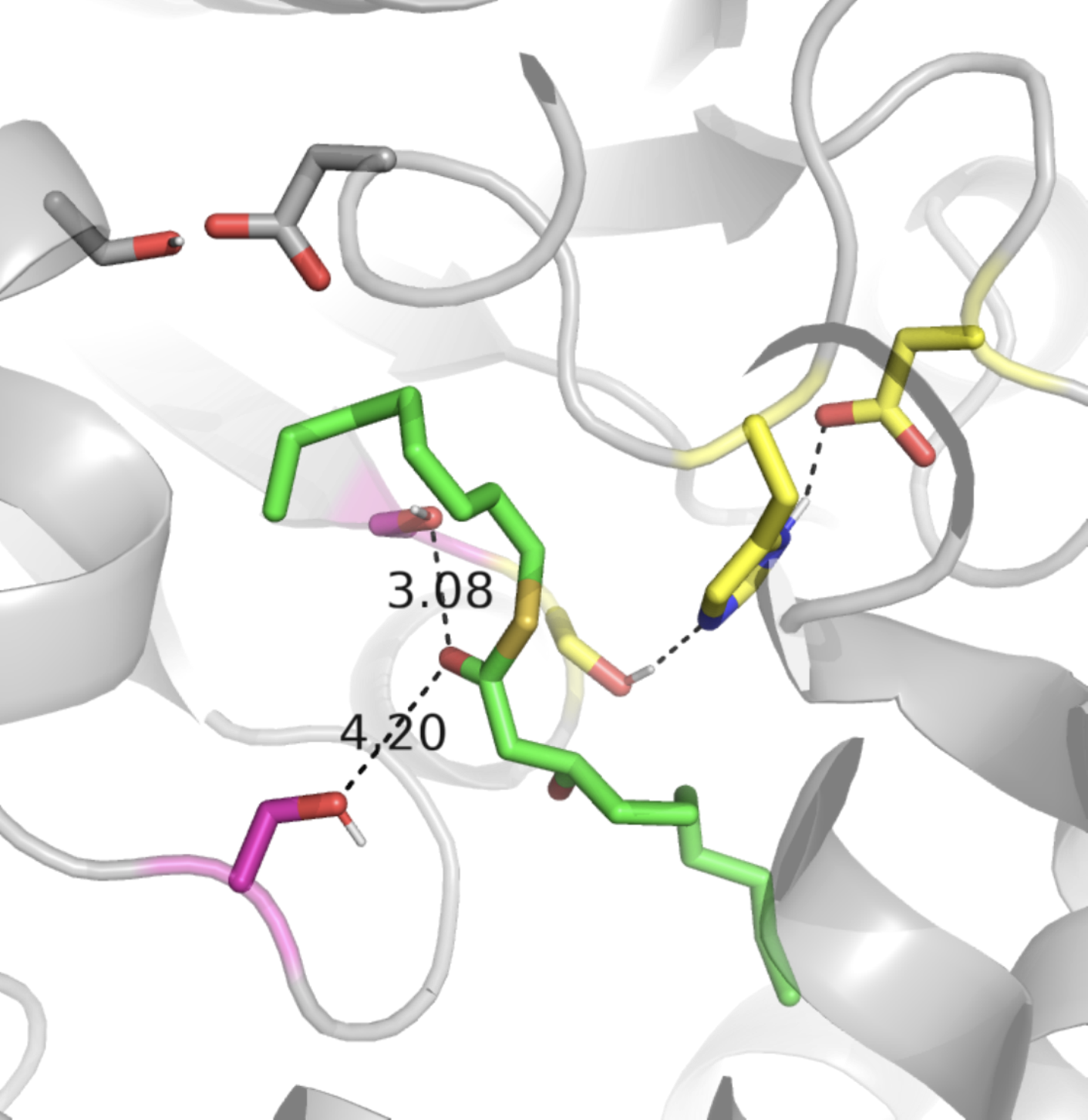 
The above two figures is the result we get from the mutation of A102S(mutate A102 to Serine) and A39S(mutate A39 to Serine). This mutation results in a closer distance in a IESC between the carbonyl group and the enzyme, which is in accordance with our theory.

Additionally, we found that the predicted results of IESC structures based on mutations of other amino acids has little difference to this result of A102S and A39S.

One possible explanation for this phenomenon is that Alphafold 2 predicts enzyme structure by training from its database(which are all exist protein data). Therefore, based on this mechanism of data training, Alphafold 2 will probably not result in different structure for other mutations to polar amino acids on A102 and A39.
Conclusion
We map mutations to relative enzyme activity successfully and find the hypothesized design of the mutant with highest relative enzyme activity. If this method can be used in actual experiments, by screening countless possible mutations in silico, we could provide a prototype enzyme with higher activity for directed evolution to shorten experiment time, save energy, and produce less waste.
Appendix
During our model, we uses some advanced machine learning techniques:
1.Alphafold 2
We use alphafold 2(online version) to predict the structure of rhlA and its mutants. 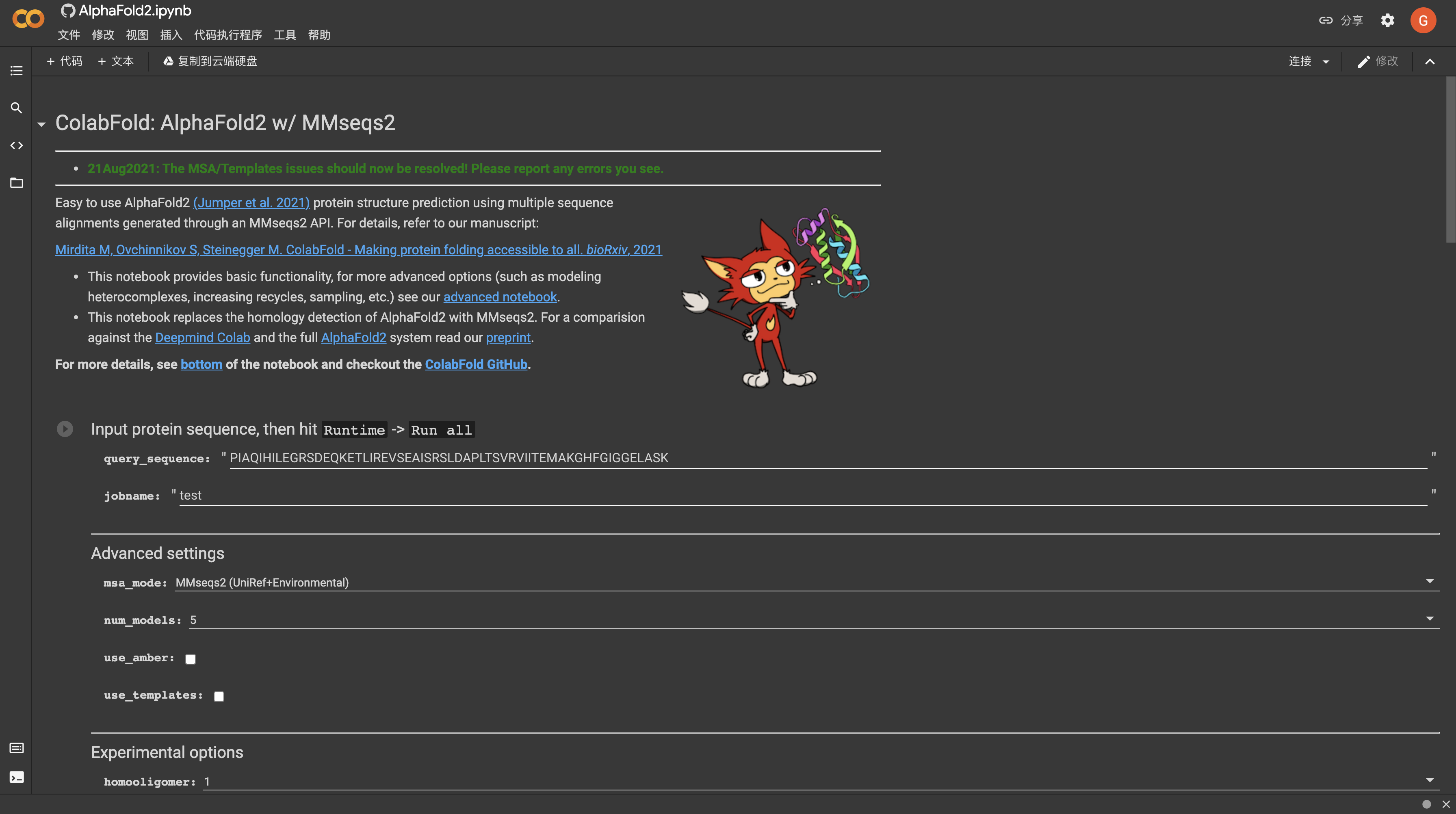 2.AutoDock
We use the docking method inside autoDock to calculate the IESC structure before reaction.(the picture is from AutoDock official website http://autodock.scripps.edu/) 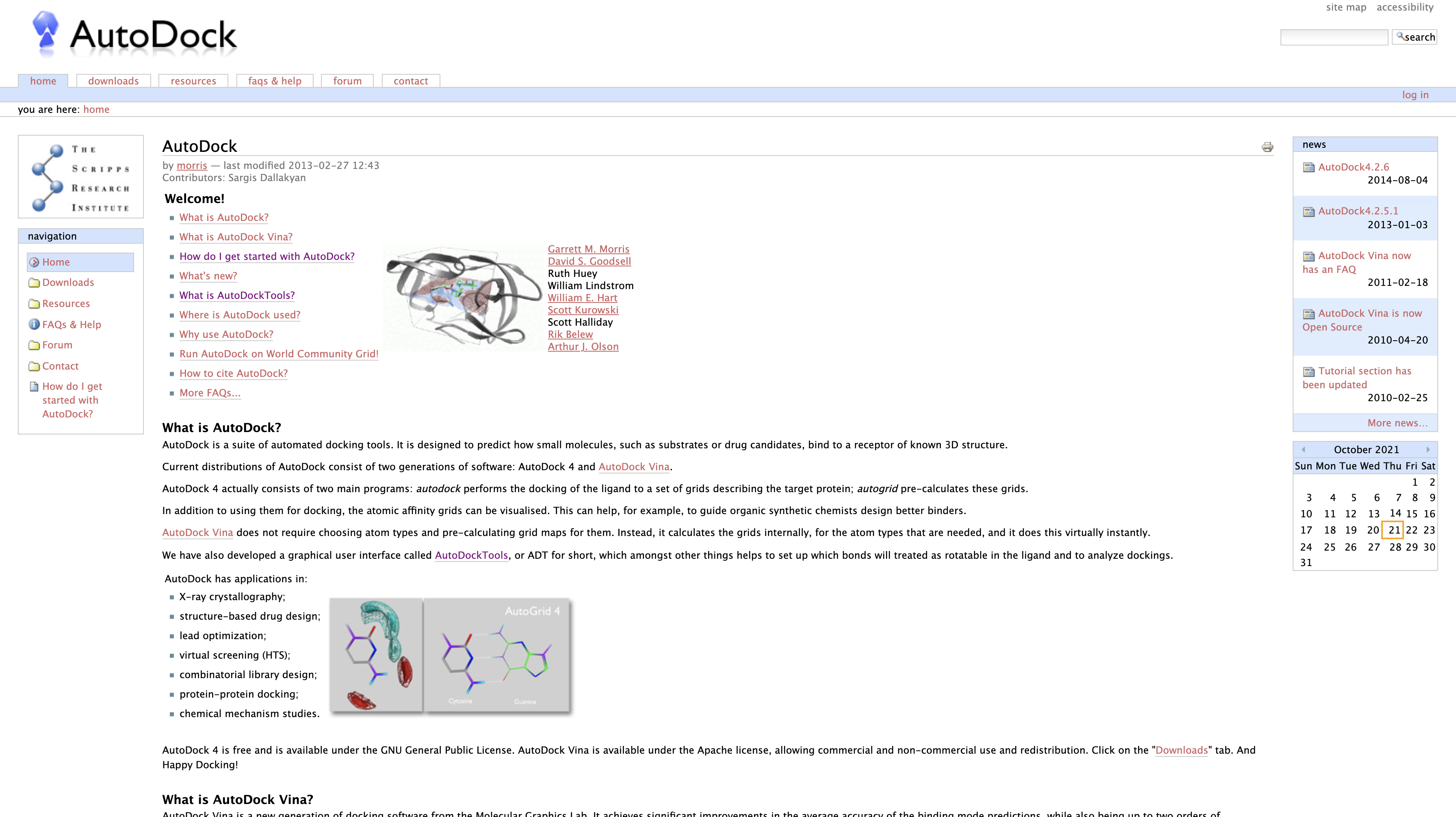 3.pyMOL
We use pyMOL to visualize the IESC structure and measure the distance between the enzyme and the substrate in the structure.

In this section, our team builds a mathematical model for predicting the abundance of bacteria selected by biosensors at the end of the directed evolution process.
Please see details and functions for Biosensor in
Design
Method
The first part of the model computes the function of RhaS concentration-the repressor protein for the rhamnose promoter-versus time. This concentration is determined by the concentration of its mRNA, which is controlled by a constitutive promoter.

The second part of the model employs reaction equilibrium constants and the concentration function for RhaS to calculate the proportion of promoters bound by the RhaS-rhamnose complex. This binding allows the promoter to initiate the synthesis of its downstream ampicillin resistance protein.

The model's final section utilizes the same logic as the first. In order to simulate the rate at which the complex's mRNA is produced, the proportion of available promoters is multiplied by a constant. After subtracting its constant degradation, the concentration of ampicillin resistance expressed is shown as the following formula.

Solution
We use Euler approximation to solve the differential equations and plot the result in a graph to see the trend. According to the protocol, the concentration of antibiotics in the environment is held constant. Therefore, the independent variables left is concentration of rhamnose and time. By our design,the increase in concentrations of rhamnose should lead to the increase in the synthesis of ampicillin resistance protein. The following graphs showsthe result of the model of how the synthesis of the protein changes due to different concentrations of rhamnose, which is in accordance with our expectations
Inference and guidance
We notice that each function showed in figure 1 is similar to the growth curve, converging on a single number. This indicatesthat in each cell, the production of ampicillin resistance protein ends in a constant, which fits the real phenomenon.
Besides, the model gives insights to the experiment that we can predict the concentration of bacteria with different rhamnose concentration.