Document Document
Design
To achieve a more efficient production of Rhamnolipids, BNDS China 2021 sought to increase the productivity of rhamnolipid synthesis by adopting P.Aeruginosa through the use of protein scaffolds directed evolution with the EvolvR system.
Protein scaffold
In metabolic engineering, protein scaffold is used to enhance the metabolic flux in order to further increase the product production rate and reduce the concentration of toxic intermediates. To be specific, dirhamnolipid is not catalyzed from its precursor R-3-hydroxydecanoyl-CoA in a simple addition reaction. Instead, this process is composed by enzymatic catalysis based on several enzymes. By using protein scaffold, enzymes responsible for the synthesis of rhamnolipid could be bound together so that the metabolic flux of this complex reaction could be significantly enhanced. Originally, all these reactants are distributed separately throughout the cytoplasm, but after applying protein scaffolds, we can close the distance between a series of subsequent enzymes. In other words, an enzyme complex instead of 3 individual enzymes can be used now. Therefore, although the overall concentration remains the same, the enzyme complexes formed through protein scaffolds limits the area where the reaction takes place, concentrating the substrates, and thereby increasing the rate of successful collisions. Plus, since the enzyme complex is concentrated in one place after the modification, the shunt products, especially some of them are toxic to the organisms, produced during each steps can be reduced. In this way, an efficient and safe way of increasing rhamnolipids’ production can be applied. 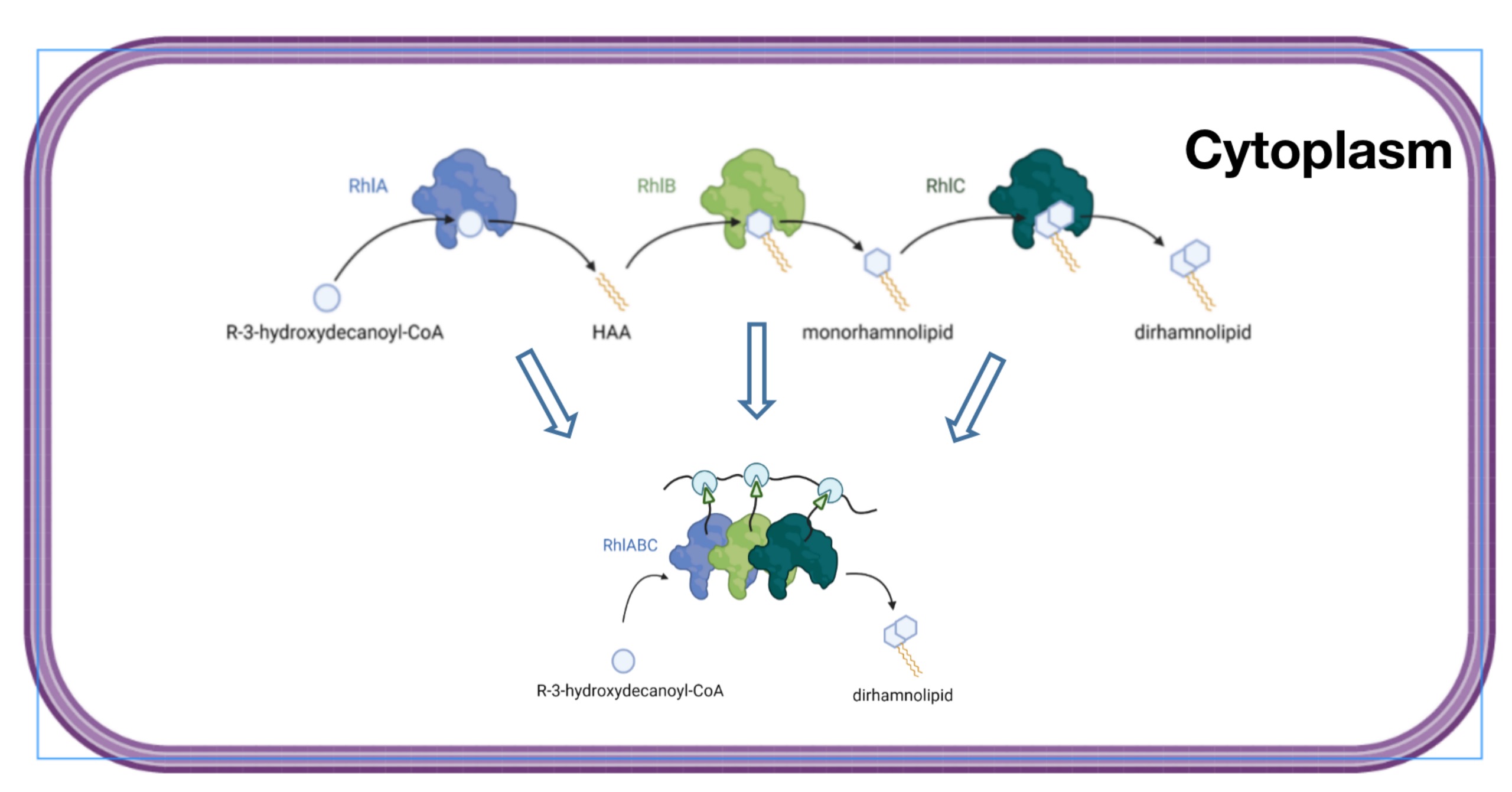 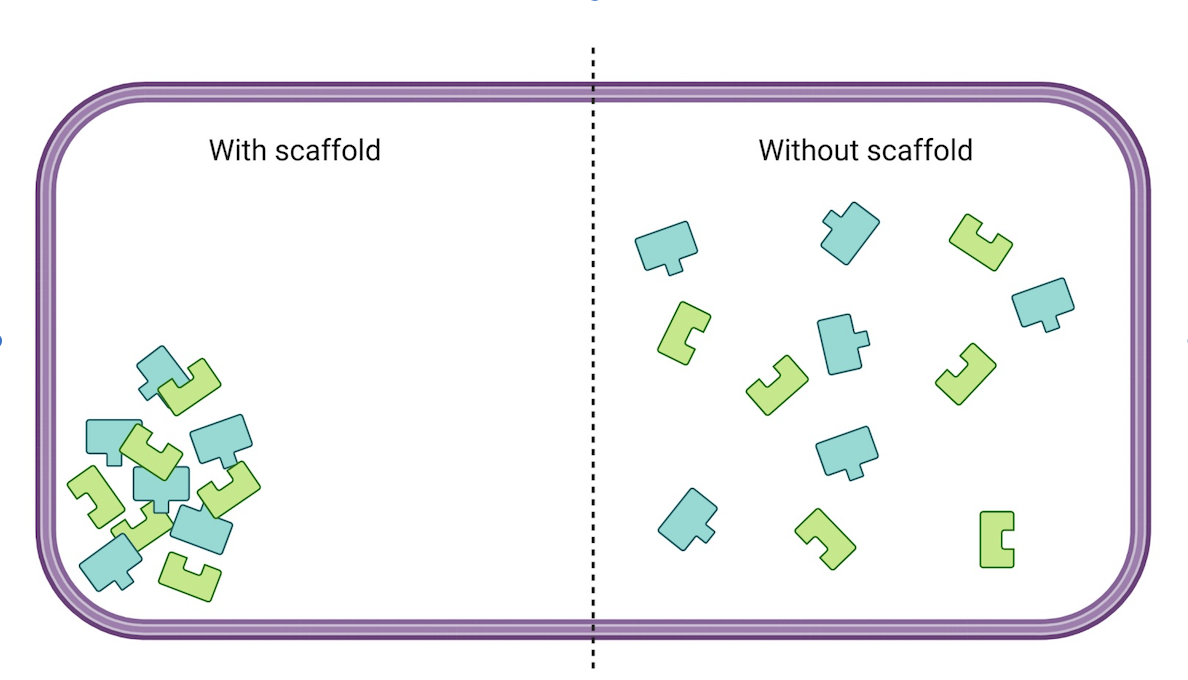 EvolvR and Biosensor
Prevent Interferences
Tune the Dynamic Range of Rhamnose Biosensor
The mutation adder, EvolvR, is the main part of our directed evolution project which helps us get the best mutants of rhlA,B,C with high efficiency. It consists of three parts: enCas9, gRNA, and low fidelity polymerase. enCas9 is a nickase that breaks a phosphodiester bond on one strand of DNA rather than causing a DSB, gRNA is a piece of RNA designed to bind specifically to a DNA fragment to guide nickase cleavage, and low fidelity polymerase can fix the nicked strand but add many mutations to that DNA fragment. By applying EvolvR system, one can efficiently add mutations to a specific piece of DNA. These mutations could silence the gene or even cause death, but it also has a chance to improve the gene’s function.

On the other hand, we use the biosensor to automatically select the best variants of RhlABC. In the project, we fused the antibiotics resistance gene downstream a rhamnose induced promoter. In addition, the plasmid carrying rhamnose sensor also carries the gene coding for the Rhamnolipid hydrolyzing enzyme, which converts rhamnolipid to rhamnose. With the help of the rhamnose hydrolyzing enzyme that hydrolysis Rhamnolipid to Rhamnose and lipid, the strain with the highest rhamnolipid production will also own the highest rhamnose concentration. The rhamnose hydrolyzed from rhamnolipid in E.coli could induce rhamnose promotor to produce antibiotic resistance genes. So the higher rhamnolipid yield a strain has, the more antibiotic resistance gene it expresses, and the higher evolutionary fitness it gains in culture with that antibiotics. The evolutionary fitness offers the strain a higher survival chance, making them outcompete their counterparts. Finally, after several generations of evolution, E. coli with the optimal genotype could flourish in the culture, which just represents the greatest rhamnolipid yield and carries the evolved rhlABC variant. That’s how the biosensor in our directed evolution system works.
While detecting the concentration of rhamnolipid with our biosensor, we notice that rhamnose could be transported through the membrane of E. coli through facilitated diffusion mediated by rhaT. This mechanism will lead to the crosstalk between individual cells, which would make us unable to accurately differentiate strains with different rhamnolipid production. Therefore, we planned to knock out the rhaT gene by applying CRISPR and lambda-red recombinase method to induce homologous recombination to delete the rhaT gene on the E. coli genome. Theoretically, gene-edited strain could not secrete nor absorb rhamnose and hence ensure the accuracy of our measurement and differentiation between cells with various production of rhamnolipid.
In order to select for the E. coli cells with the optimal rhamnolipid production, a rhamnose biosensor with ultra-high sensitivity is needed, which is reflected by its dynamic range. However, the wile-type rhamnose operator might possess the dynamic range sufficient for the selection. Therefore, we adjusted the strength of the RBS upstream the GFP reporter in order to fine-tune the dynamic range of the rhamnose-inducible genetic circuit. Ailurus biotechnology sponsored us to screen the strength of RBS and find the RBS with which the of GFP expression is the highest, which enables the sensitive response towards the change of the concentration of rhamnose. Please review our part improvementpage for more details.