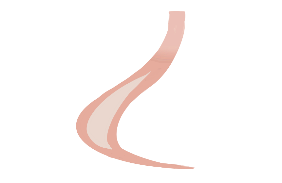 Proof Of Concept
Early screening and treatment of colorectal cancer(CRC) has been proved to be conducive to reducing the mortality rate of CRC. Currently, most diagnostic methods do not meet the requirements of rapid, sensitive and specific screening of CRC. Based on the selection of miRNA as our biomarker for its high sensitivity and specificity，we developed an ultrasensitive approach for miRNA detection based on a combination of Loop-mediated isothermal amplification(LAMP), CRISPR/Cas12a trans-cleavage and Slip-Chip. And in terms of hardware, in order to achieve rapid, portable and simple “sample-to-response” integrated detection of CRC, we constructed an intelligent interactive IVD device for large-scale early screening.
Our system has been tested to be simple to operate, for completing the process within 1h，and its sensitivity reaches to fM level. Furthermore, our system has the capacity to detect different miRNAs, giving the potential to build standardized cancer detection platforms.
We carried out verification experiments from biological and hardware aspects under laboratory conditions and combined the two together to produce a product object for verification. Our experimental results show that our project is feasible and can be applied to real environments.
Bio
Feasibility verification of miRNA detection in experimental environment
In order to verify the feasibility of LAMP + CRISPR amplification system, we choose the LAMP-CRISPR itself system and the system in the fetal bovine serum environment test results to analyze.
Verification of LAMP+CRISPR system
We designed the following experiments. First, ligation reaction is first performed to obtain the initial structure of the LAMP cycle amplification step of the neck loop structure. Then carry out LAMP amplification experiments. The obtained products are analyzed by agarose gel electrophoresis. 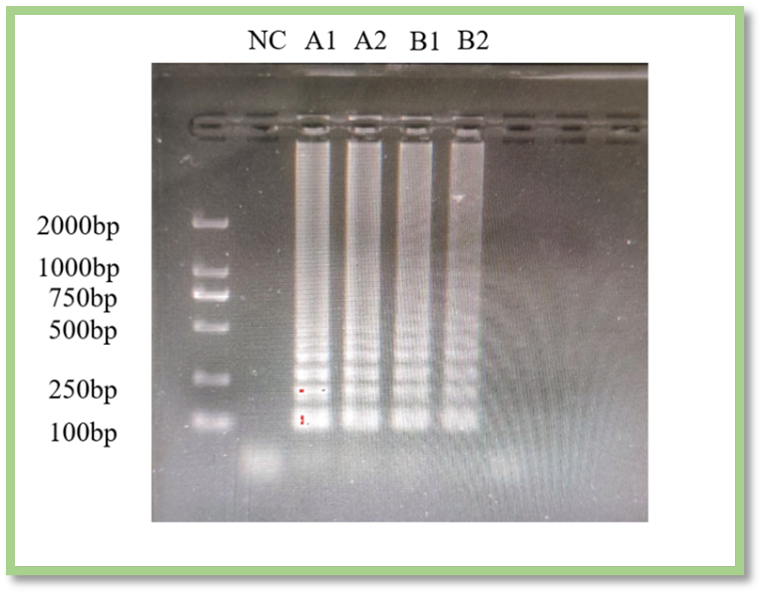 Fig.1 Results of agarose gel electrophoresis
NC：Negative control group；A1、A2： Standard positive
Agarose gel electrophoresis results show that LAMP amplification results are good. The following fluorescence curve is obtained by the next CRISPR specific detection test and there was no false positive. The fluorescence intensity of the experimental group is obvious, which proved that LAMP + CRISPR system is feasible.

Fig.2 Fluorescence curve
At the same time, we also verified the necessity of LAMP through the control experiment. The results are as follows：

Fig.3 Relative fluorescence untis
It can be seen that there is no significant fluorescence change in the group without LAMP reaction. But strong fluorescence is detected when the ligation product was added to the CRISPR/Cas12a system after LAMP amplification. According to the characteristics of the CRISPR/Cas12a system, it can recognize the double-stranded ligation product and the first step of the ligation product needs to undergo LAMP amplification reaction to produce double-stranded structure. This proves that the LAMP amplification reaction converts miRNA into a double-stranded structure recognizable by the CRISPR/Cas12a system while it can improve detection sensitivity.
Verification of Environmental anti-interference of fetal bovine serum
By simulating human blood sampling with fetal bovine serum, it is proved that miRNA can be specifically recognized in the interference system and can be successfully ligated and lamp amplified. Finally good fluorescence value can be detected in the final CRISPR/Cas fluorescence reaction.
In this step, we used fetal bovine serum to dilute miRNA to simulate the interference environment and set water to dilute miRNA at the same concentration for verification.
Experimental results and analysis:
1）Agarose gel electrophoresis results of LAMP 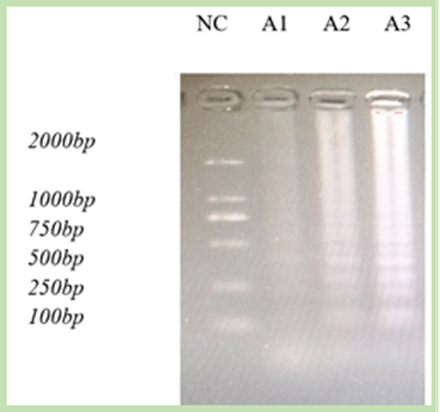 Fig.4 Results of agarose gel electrophoresis(2)
The first on the left：maker; The second on the left：blank
The third on the left：A——miRNA diluted to 50pM using fetal bovine serum; The fourth on the left：B——miRNA diluted with TE buffer
We can see from Images that our miRNAs can be specifically recognized and amplified in interference environments.
2）Results of Fluorescence Data Processing 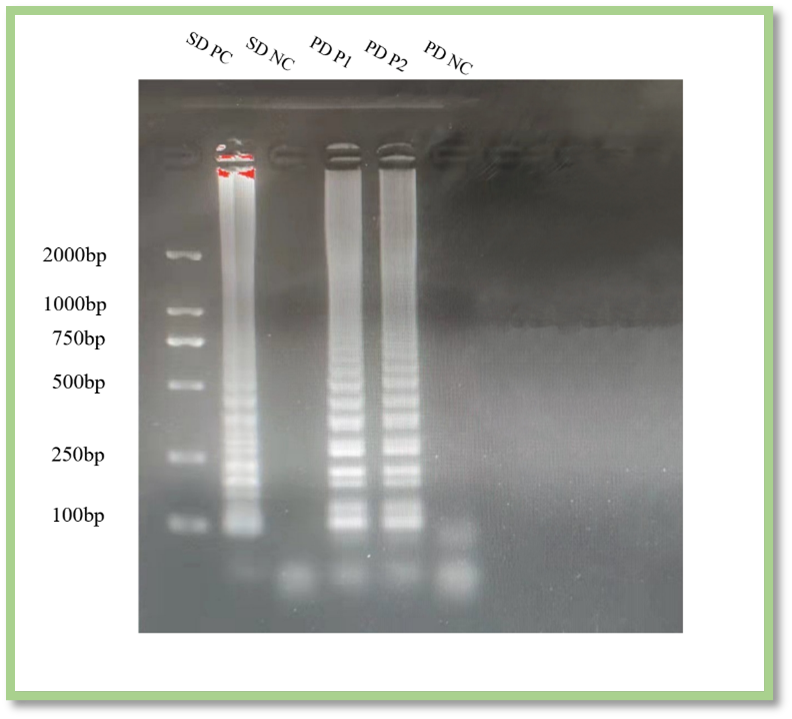 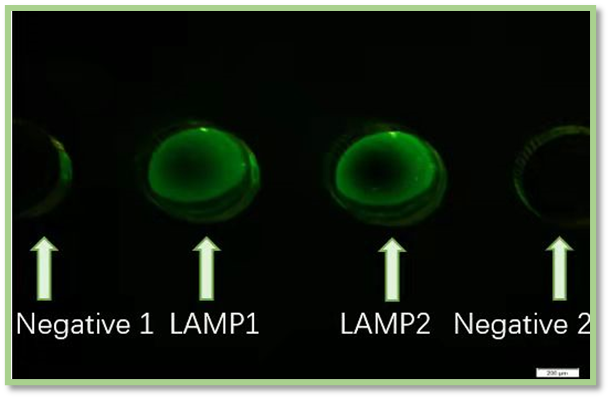 Fig.8 Results of fluorescence
2. Verify the feasibility of CRISPR experiment on chip
We used a concentration of 50pM miRNA for experiments. We added sample to the chip for connection reaction. After LAMP reaction and CRISPR reaction, positive samples were observed under fluorescence microscope, which indicated that the positive group produced better fluorescence. 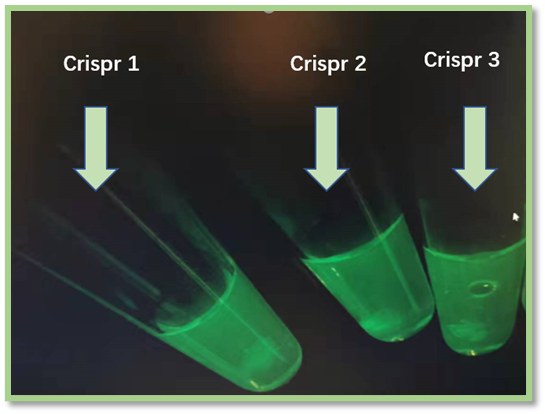 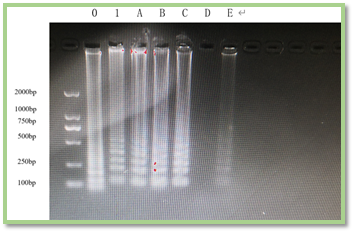 Fig.10 Results of agarose gel electrophoresis（4）
Experiment results show that the LAMP amplification reaction system has good amplification performance.
Next we used the amplification products from the above experiments for further CRISPR reaction. Put them in qPCR instrument and react under 37℃ for 40 min, we get the following fluorescence curve. 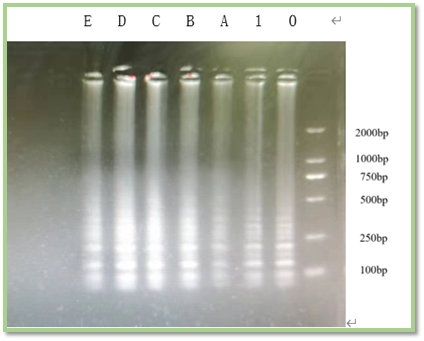 Fig.12 Results of agarose gel electrophoresis(5)
Each lane has the obvious band production, has the LAMP amplification product production.
Next we used the amplification products obtained from the above experiments for further CRISPR reaction. Put them in qPCR instrument and react under 37℃ for 40 min, we get the following fluorescence curve. 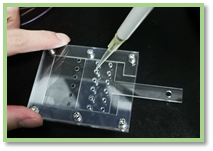 Fig.15 Use SlipChip
video.1 Sliding chip display
In order to verify that our sliding chip has good sealing performance, can ensure the normal progress of the biological reaction steps and has the ability of optical detection, we tested the sealing performance, push rod drive and on-chip experiments.
1.1 Tightness
In order to prevent the slip-chip leakage, we use a solid freeze-dried ball, effectively avoiding the chip in the sliding process of liquid leakage. We glued the slip-chip`s bottom and backplane at 170℃. And verified by experiments, there is no leakage problem.
We use two methods to verify the leakage. Firstly, we used a pipette to add blue pigment solution to the slip-chip, and slide the sliding layer of the chip by hand. It was observed that the pigment solution did not diffuse outside the main reaction chamber, indicating that the sliding chip had good sealing.
As we can see in Fig.3, we also added fluorescein sodium solution to the slip-chip for fluorescence detection. It was found that there was no fluorescence outside the main reaction chamber, indicating that the sliding chip was well sealed.
Video.2 Leakage test 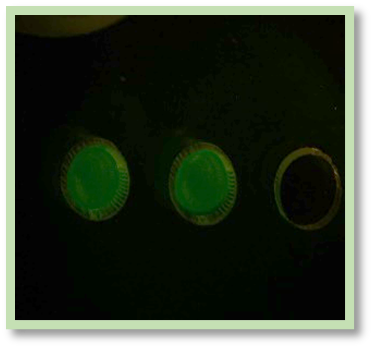 Fig.16 Using fluorescence to test slip-chip sealing
1.2 Radius-rod drive
Because PMMA material has a certain toughness, so the larger friction resistance may lead to micro electric push rod and slip-chip movement is not synchronous. This will reduce the accuracy of slip-chip sliding control, thus affecting the correct biological reaction steps. We connect the slip-chip with the electric push rod through the copper column to realize the push rod to drive the chip to slide.
Video.3 Push rod slidi
1.3 On-chip biological reaction test
We used a concentration of 50pM miRNA for experiments. We added sample to the chip for connection reaction. After LAMP reaction and CRISPR reaction, positive samples were observed under fluorescence microscope, which indicated that the positive group produced better fluorescence. 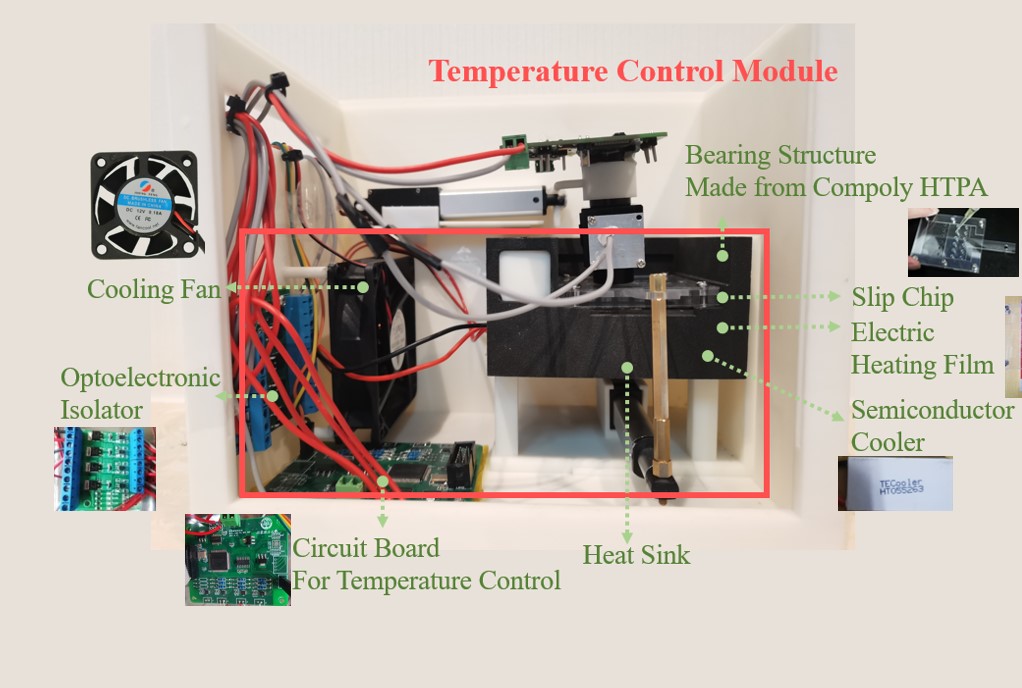 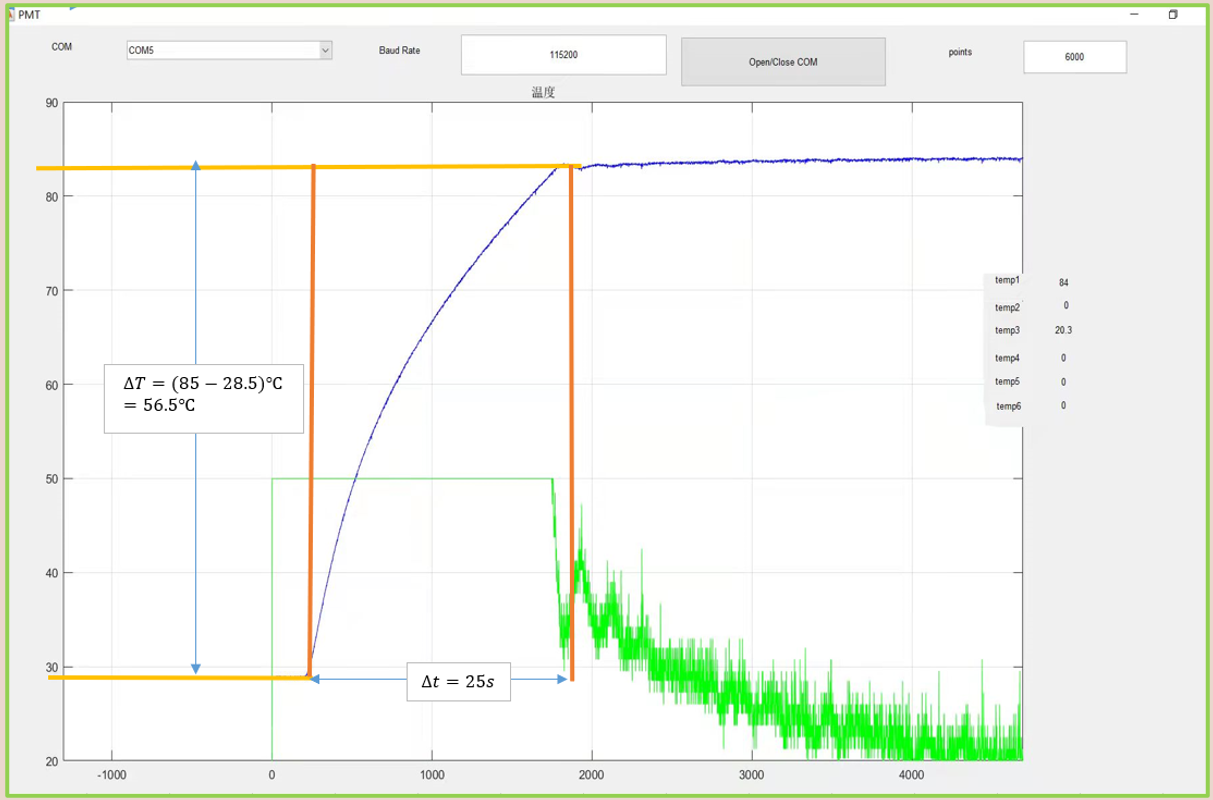 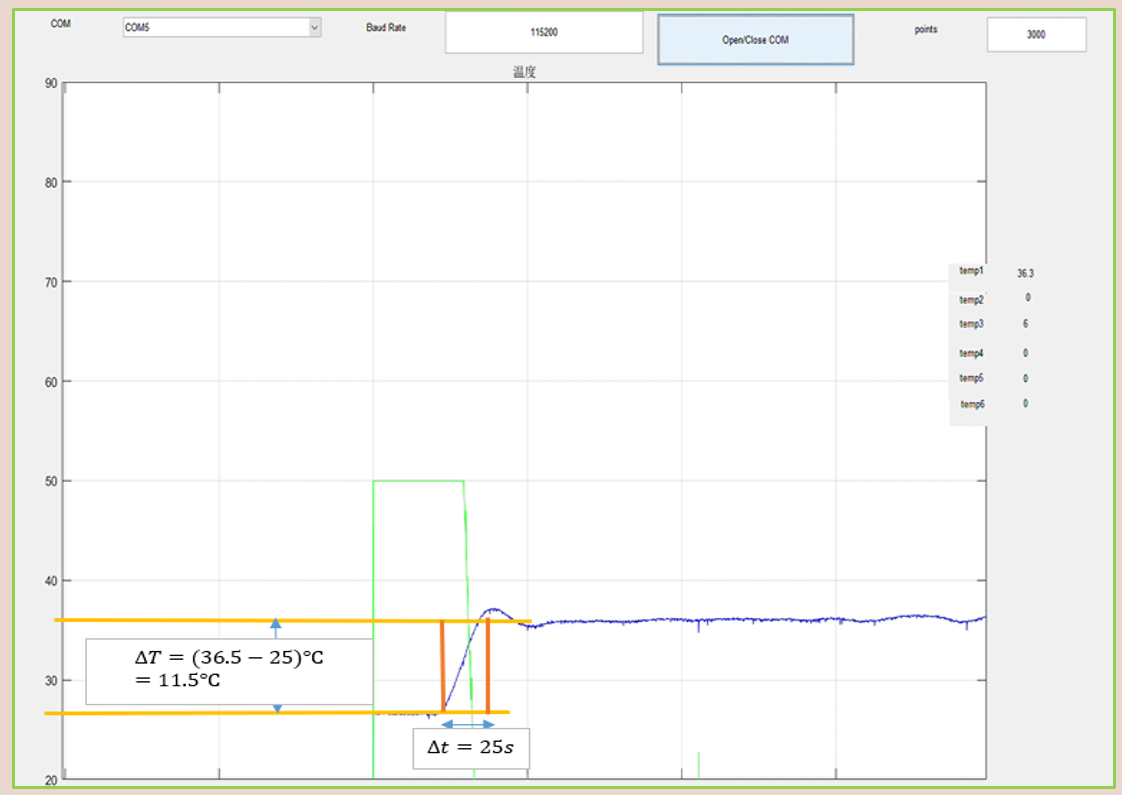 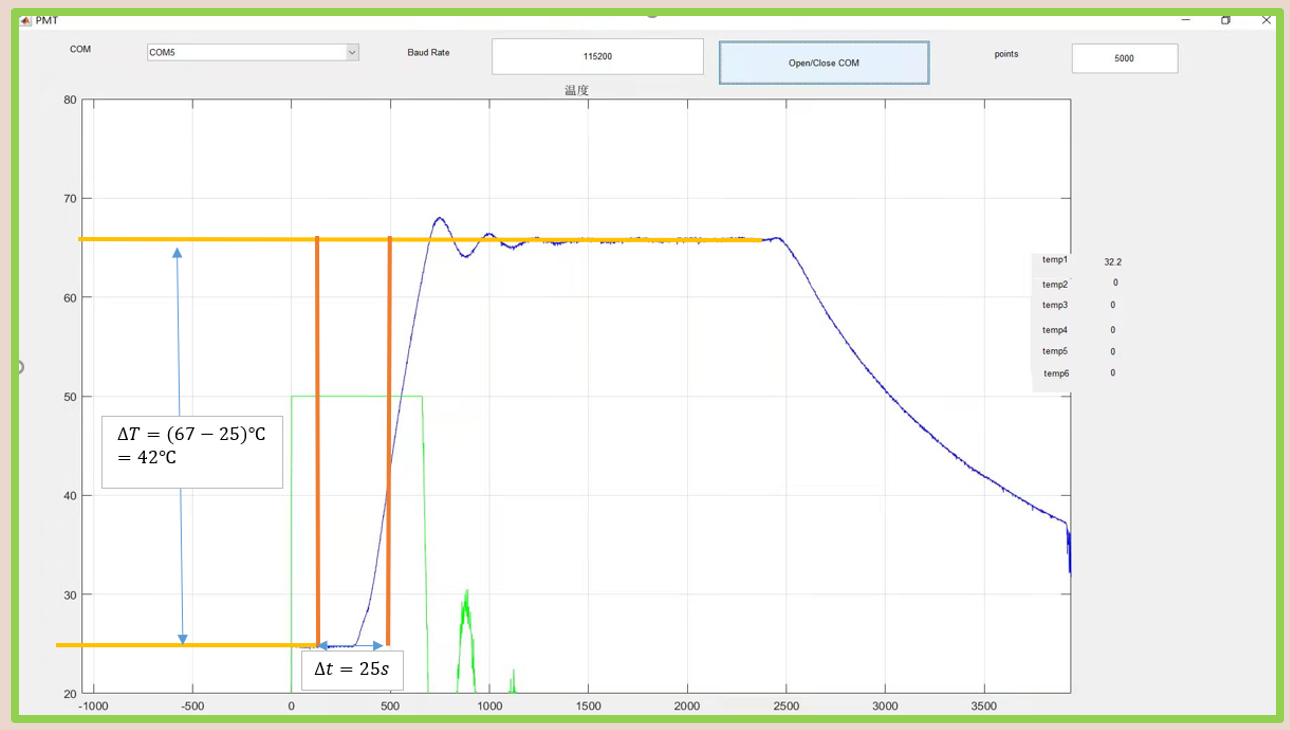 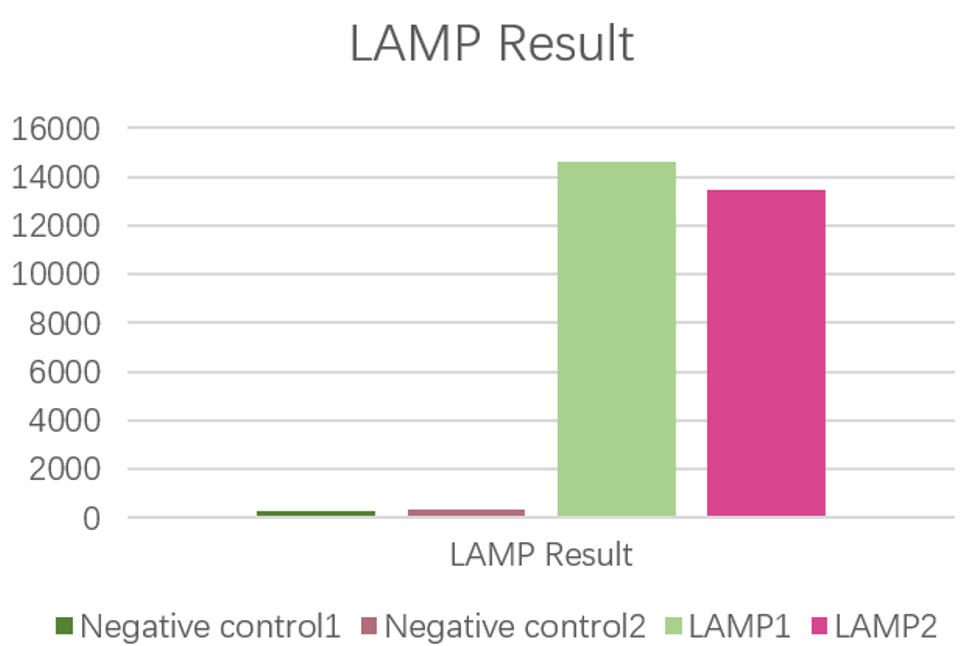 Fig.22.23 Observation of fluorescence microscope and the detection results of microplate reader 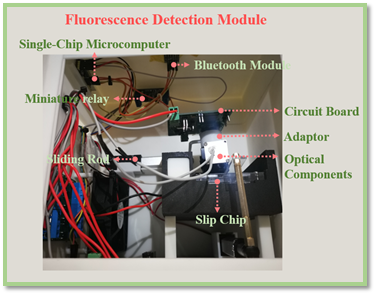 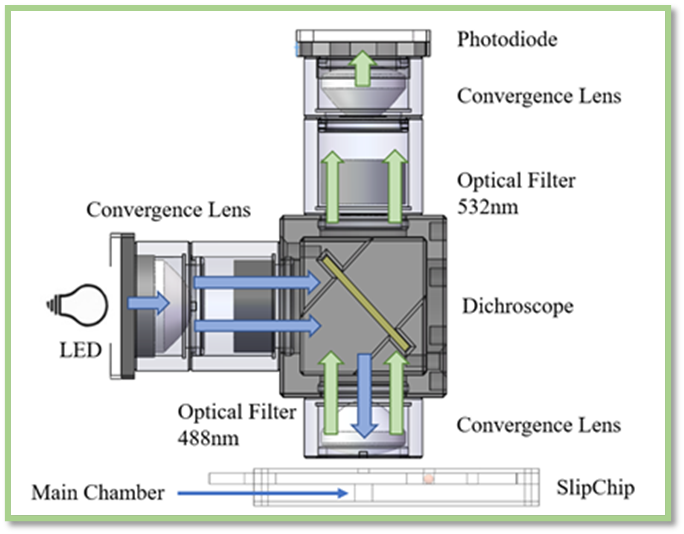 Fig.25 Fluorescence optical path structure
In order to prove that our fluorescence detection module can achieve the expected goal, which is to achieve accurate fluorescence detection and obtain correct detection results, we carried out corresponding tests.
3.1Precision
Within the measuring range of the instrument, select 6 measuring chambers. We prepared calibration fluorescent dye solutions for each chamber and tested them. Each calibration dye with concentration of 0.1, 1, 10, 100 μmol/L was detected once. The optical system collected the data of the target channel and calculated the average value M and standard deviation SD of the measurement results of each concentration calibration dye. According to the formula, the coefficient of variation CV is not greater than 5%.
CV=SD/M×100%
CV is coefficient of variation, SD is standard deviation; M is the average value of the measurement results.

3.2 Different channel fluorescence interference and scanning
Fluorescence Interference of Different Channels and Scanning Test
Video.4 Fluorescent scanning
The six chambers of the sliding chip were placed with different concentrations of fluorescent reagents of 0.2, 0.5, 0.8 μmol / L ) as shown in the table. The optical system was controlled by a self-sliding push rod to obtain the fluorescence intensity value, and the fluorescence value curve was plotted. The results are shown in the following figure.
It can be seen from the results that the fluorescence signal intensity between the hole 1 and 2, 3 and 4, 5 and 6 is basically similar, indicating that the crosstalk problem can be controlled to a certain extent. The fluorescence value of hole 1, 2 and 3, 4 and 5, 6 can be clearly distinguished, indicating that the instrument has the ability to detect different concentrations of fluorescent dyes.
Table. Table of chamber number corresponding to fluorescein concentration 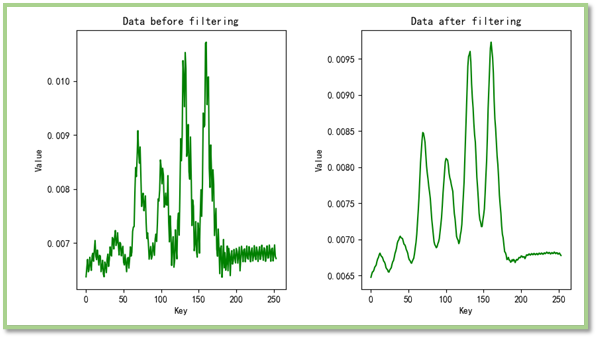 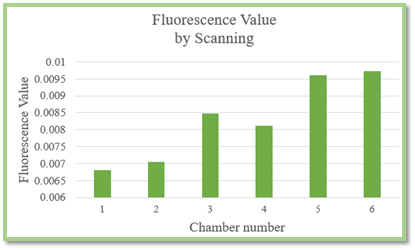 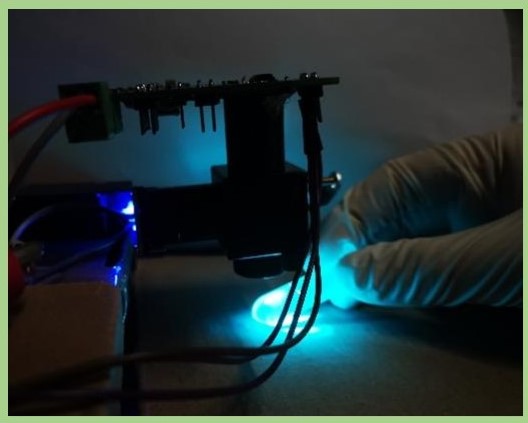 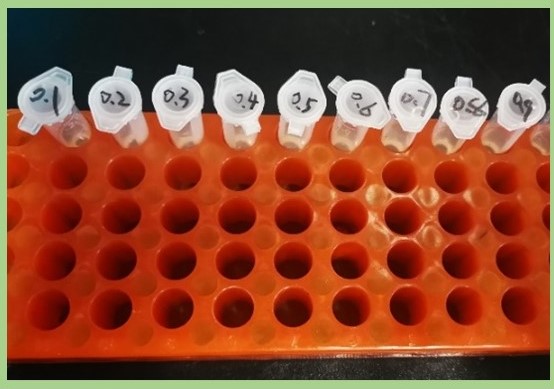 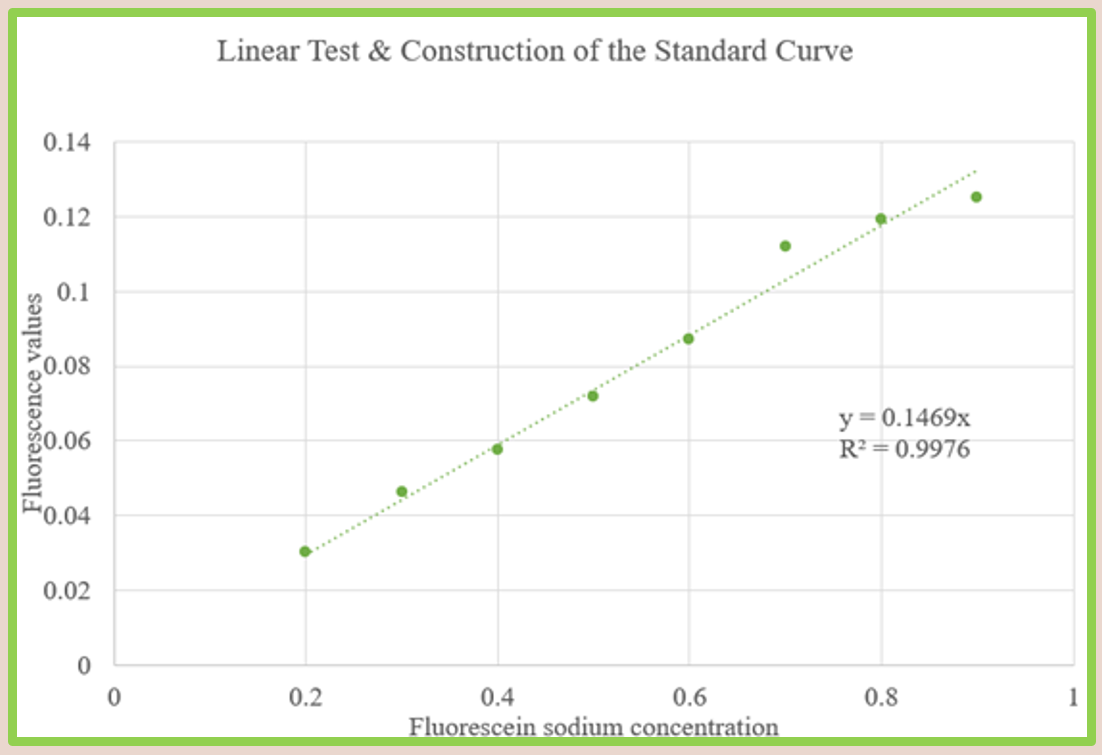 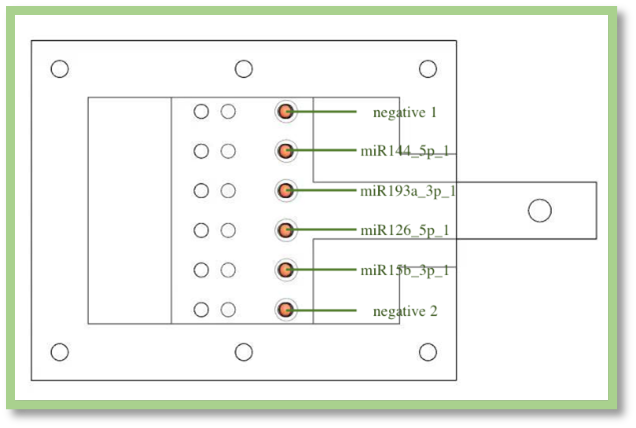 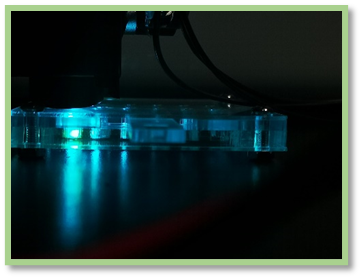 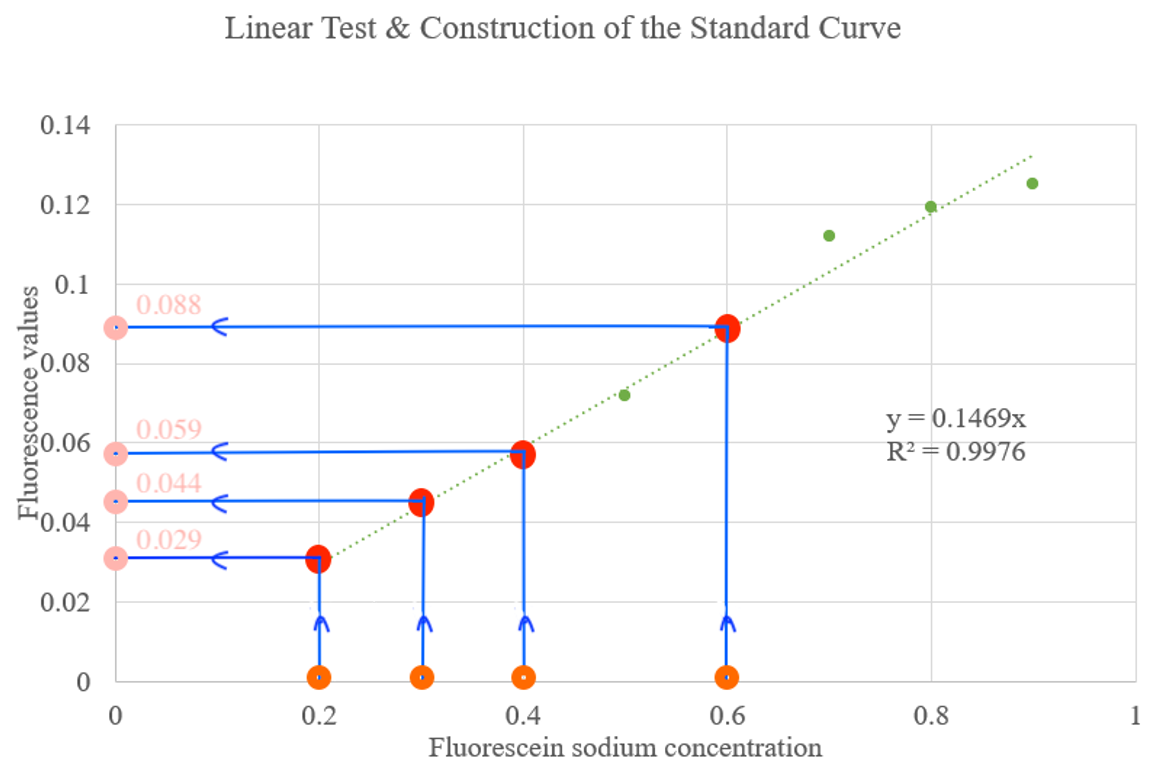 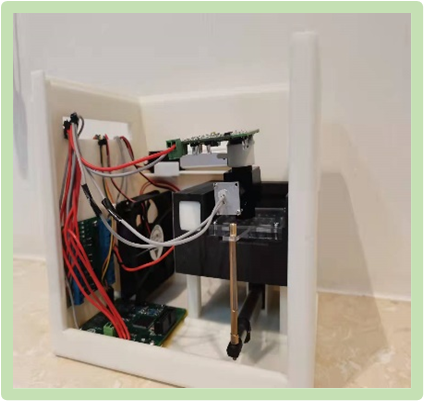 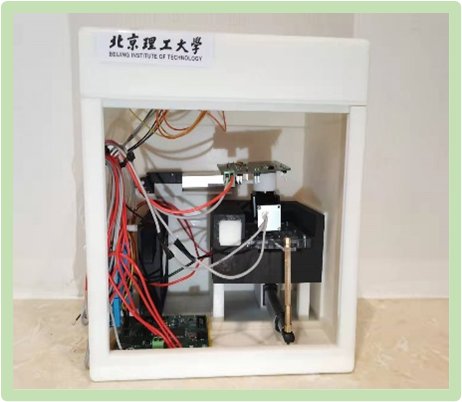 4.2 Instrument operation
Users can complete the use of the instrument only by adding samples according to the operation tips of WeChat mini-app. As shown, pull out the main part of the reaction for reagent addition.
Video.5 Pull
Video.6 Sample addition
Software − Data interaction and control
In order to apply the end-user experience and meet the POCT test scenario, we adopted the WeChat mini-apps on the smartphone to deploy the system using the WeChat developer tool. The results are as follows:
Video.7 WeChat mini-app
We mainly realize the team introduction, Bluetooth control, temperature data visualization, fluorescence results display, as shown below.

Summary
We have proved that our project is feasible through experiments. In this year 's project, we successfully developed a cancer detection platform for early screening of colorectal cancer:
Video.8 Whole machine
In summary, we have successfully verified the feasibility of the project. The advantages of our project are as follows: 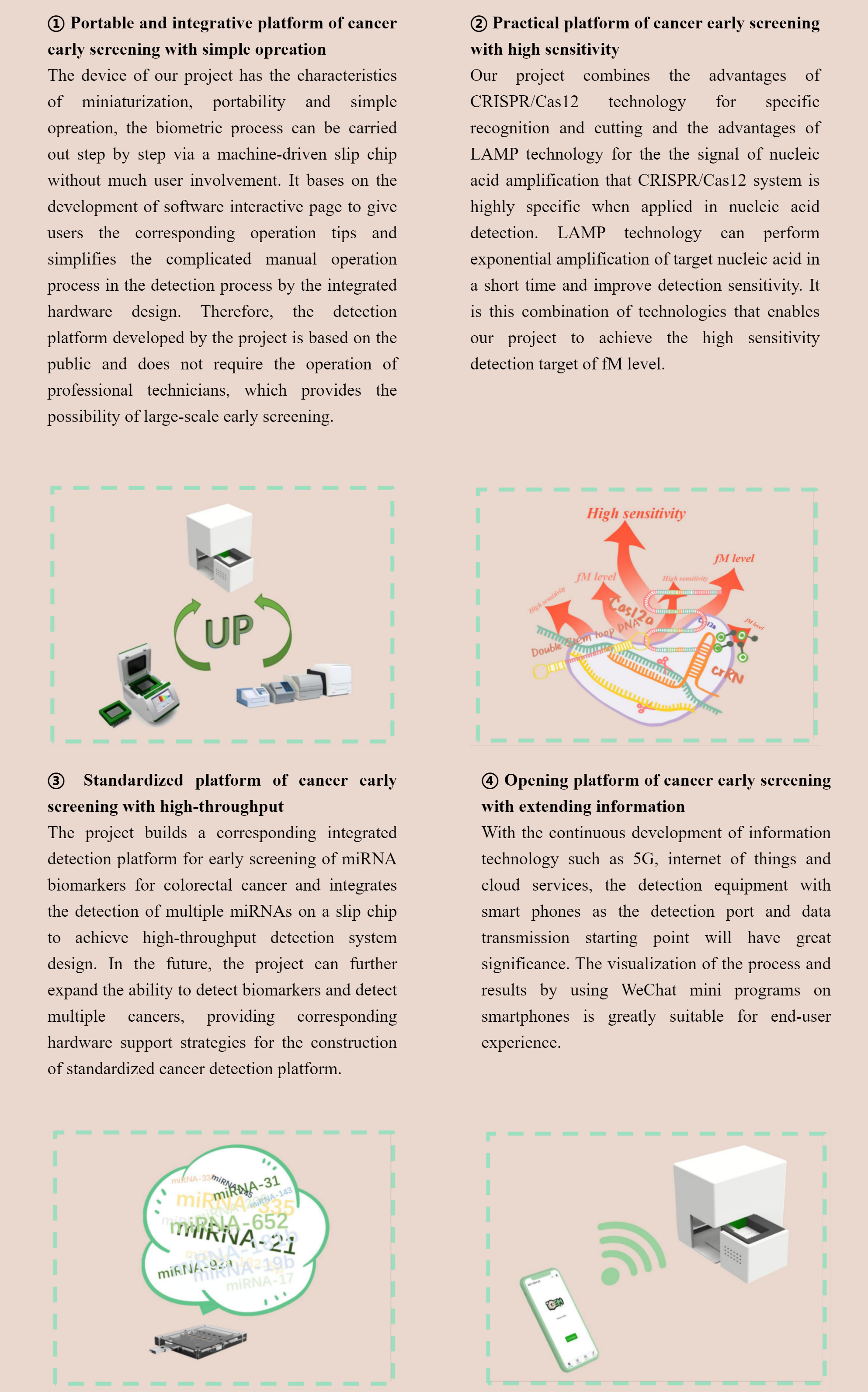