Contribution
Part: BBa_I13521:
We originally tested the amount of fluorescence given off by cells using a liquid culture of our circuit with Anhydrotetracycline (ATC) or Tetracycline (TC). But, our fluorimeter was not working. Therefore, we had to come up with a way to measure the amount of fluorescence given off by these cells without it. We did some research and came up with a novel (new) experiment that no one has ever done before, based upon the filter disc assay that is sometimes used to quantify the bacteriocidal effect of antibiotics.

Our new method represents a cheap, yet quantitative way to measure induction of a gene. We expect it can be useful for others in the iGEM community that do not have access to a working fluorimeter.
How we did it
The ATC concentration used was 5 mg/mL and the TC was 12.5 mg/mL. To make the concentrations, we diluted them both with 50% ethanol. Making one of 1:10 dilution and 1:1,000,000 dilution of each trying 20 uL and 40 uL of liquid on the small filter papers. In total, 8 plates. They were entered into the incubator at about 4:30 pm and were checked around 9 am. It was a success. Zones of inhibition (clear) and zones of expression (red, expressing RFP) appeared.
So from these we knew that the 1:1,000,000 dilutions were not enough to cause anything significant, but all of the 1:10 dilutions were successful for the TC and the ATC. This could become a quantitative measuring method via the diameter of the clear and red circles. We continued to change the amounts and dilutions to see what we could work with. There were noticeably larger clear circles in the 40 uL plate. We thought it may be because there was more ethanol in it, killing the bacteria.
We thought that the clear rings were coming from the ethanol killing the bacteria, but after further inspection we realized this was false. The ATC and TC diluted 1:1,000,000 contain more ethanol than the 1:10, but yet those plates did not see any clear rings. Therefore, we came to the conclusion that it must just be from the ATC and TC being so strong that it is potent, leaving the clear rings of bacterial death. This concludes that using the ethanol to dilute the ATC and TC is safe for now.
We continued with the same normal agar plates and did duplicate experiments. From this we saw that the red and clear band widths changed depending on the concentration of ATC or TC. All were successful in showing clear and red rings. For this,10 uL seemed to work better on hole punch sized filters and doing two filters per plate. Using 20 uL would be good for testing one filter per plate.
We wanted to test lower concentrations as well considering our signals may be difficult to pick up from real samples if the concentration is too low. We then tested different concentrations of ATC and 7.5% DMSO plates, using strain J13522 HL2483.
We retested normal plates and 7.5% DMSO plates with P8, hole punched sized filters with ATC concentrations of 1:250, 1:300 , 1:350 , 1:400 , 1:450 , and 1:500. We needed to see how low of concentrations we could detect and how the DMSO affects the plates. We could then graph all data points collected to get an equation for the diameter of the rings related to concentration. Actually testing DDT and its derivatives then needs to be looked into testing it in soil on the plates.
A new bacteria culture was made to use strain J13522 - HL2483. The same strain used previously. We plated 3 normal plates and 3 DMSO plates with 2 different concentrations per plate with the newly made ATC. I put 10 uL of each concentration, all on P8 filters. We noticed the DMSO plates soaked up the bacteria a lot faster, almost feeling dry when spreading the 100 uL around the plate. It also absorbed more of the ATC when I put in on the filter compared to the normal plates.
The plates were accidentally left in the incubator longer than expected. The DMSO 7.5% plates are more polar and therefore are expected to have the rings spread out further than compared to the same concentration of ATC on a normal plate. This would allow us to view lower concentrations of ATC on the DMSO plates. Only strange, singled out colonies appeared on the 1:250 and 1:300 Old ATC concentration plates. There may have been some slightly visible rings on a couple of the plates but not enough to measure. We determined that the DMSO plates probably are not best for this and other polar solutions should be looked into.
On another round of plates we left them in the incubator for around 26 hours and then we did not measure the radius of the rings until 68 hours after pulling them. But this gave us unexpected results! We got clear and defined rings at 1:500 concentrations. This did not occur this summer. Maybe leaving them in the incubator a little longer will allow us to see lower concentrations. The more dried out the plates become, it creates an environment with less solvent, allowing the rings to spread out further.
We tested ATC concentrations of 1:500 (x2), 1:550, 1:600, 1:650, 1:700, 1:750, 1:800, 1:850, 1:900, 1:950, and 1:1000. We also left them in the incubator for an extended period of time while measuring them multiple times.
These results did not come out as expected. We may have a couple explanations for this. We were very precise when making the dilutions this time, down to the hundredth and thousandth decimal point using the P2. This could affect the concentration differences compared to not being as precise. Secondly, it was pointed out the first time we had an extended incubation, the plates became dried out. This means there was less solvent present, allowing the circles to spread further than expected. Moving forward we will create even lower dilutions while still being precise and repeat this experiment again to see what we get. We now need to make sure agar plates are made as smooth as possible and all the same thickness to prevent the plates from drying out and affecting the diameters of the rings.

In the above plates, the "zone of induction" (ZOI) can be measured. We found that these measurements were proportional to the amount of aTc provided, showing this as a new technique that labs can use to measure induction. 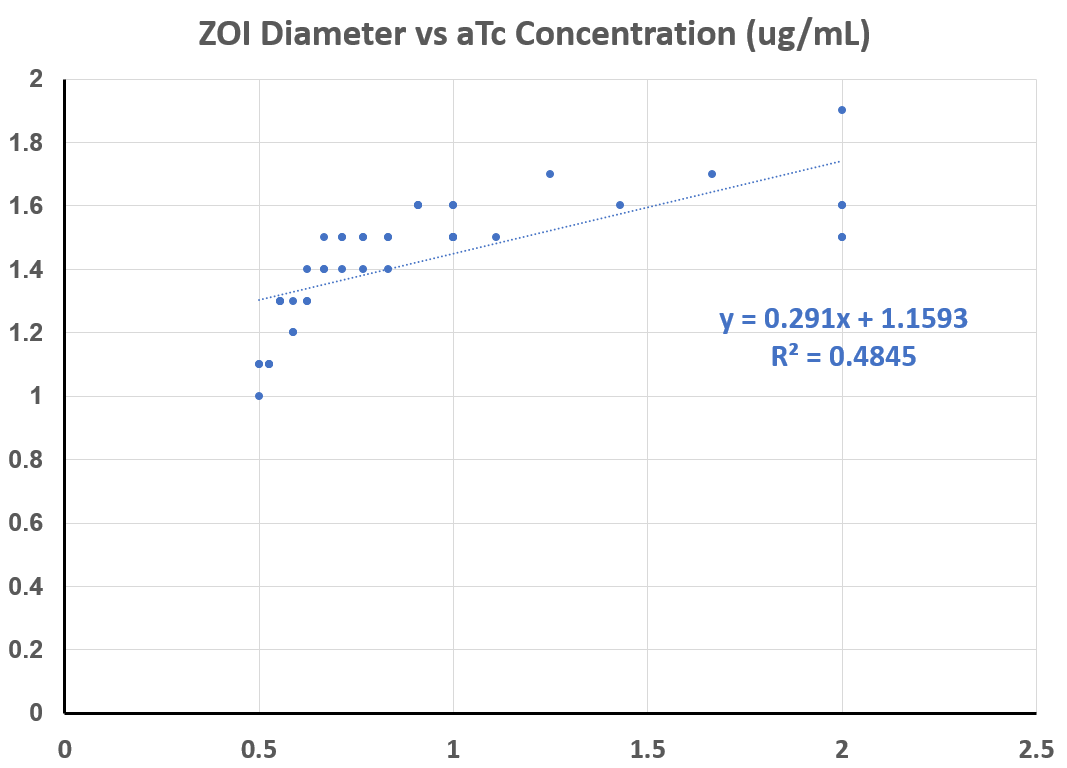 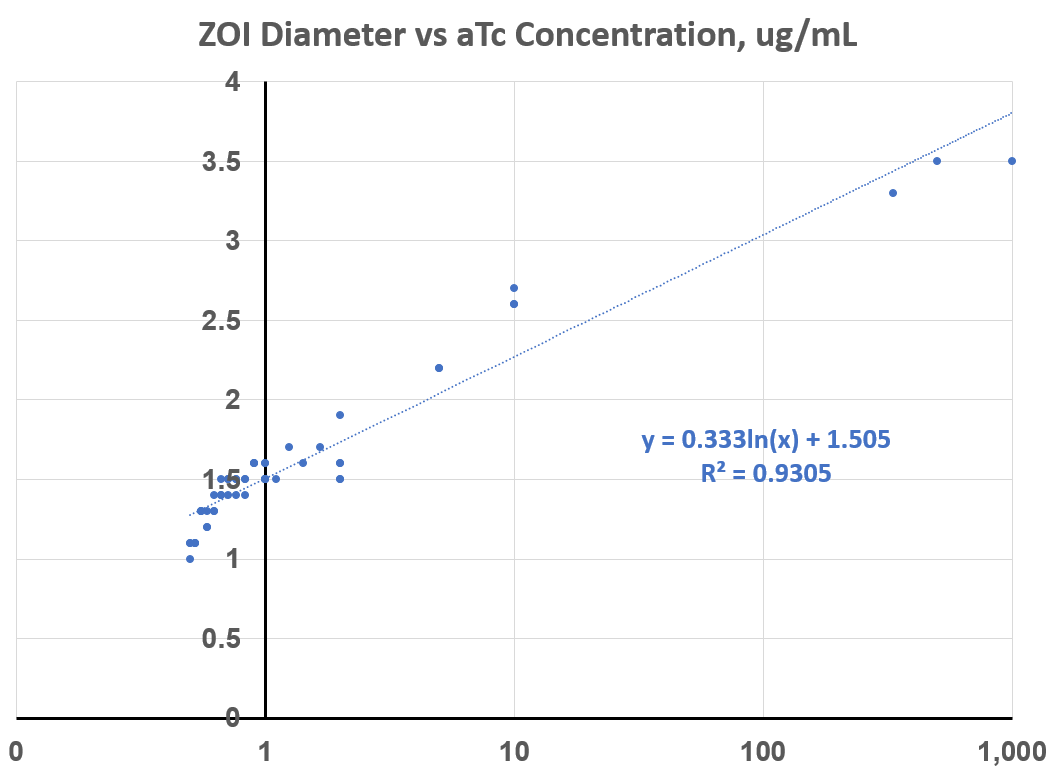 "Universal Golden Gate" Assembly Approach
In order to make a useful contribution to future iGEM teams, we have further tested our “Universal Golden Gate” assembly approach. This approach uses a small set of primers that bind to the prefix and suffix of any BioBrick. We tested primers of a wide range of Biobricks to make sure they work correctly and to see if they could bind elsewhere. We have screened 19 different types of BioBricks, including two from each type. We have found and reported the five binding sites with the highest percent match. We have recorded the name of the primer, position, melting temperature, number of nucleotides that match, and the number of gaps in which the nucleotides do not match. Through this we have discovered which type of BioBricks have higher percent matches than others.
BioBrick: BBa_K608351
Type of BioBrick: Coding