Overview of Project Inspiration: Why Orthogonality? Importance of Orthogonality What is our Orthogonality Toolkit? Input Levels for Our Model Our Team’s Designed Circuits References
Page Title 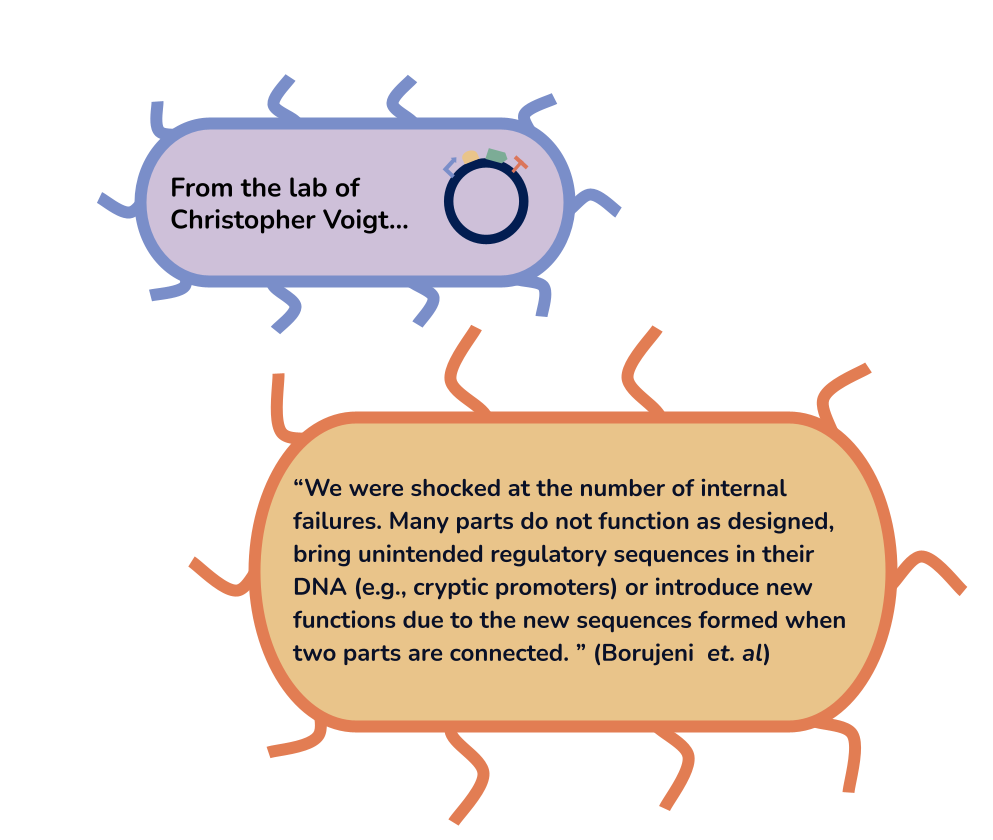 Orthogonality, defined as the lack of unintended interactions among parts of a circuit or between a circuit and host physiology, is a fundamental tenet of synthetic biology. While methodology for identifying undesirable interactions among circuit parts themselves is well studied, assessment of orthogonality between the circuit and the host physiology that goes beyond metabolic burden, "an unnatural load consuming cellular resources," (Ceroni et al., 2015) has received surprisingly little attention, with the few existing methods both costly and technically challenging. To address this universal need, W&M iGEM is developing an accessible toolkit for circuit-host orthogonality assessment in E. coli. This toolkit employs circuits that provide measurements not only of classic burden, but also more encompassing orthogonality markers identified by extensive analysis of RNA-seq data. These measurements serve as inputs for our integrative, comprehensive mathematical model that provides the end user with overall orthogonality metrics, with the goal of enhancing the efficiency, functionality, and safety of all synthetic biology circuits.

As with many other teams, our W&M 2021 iGEM team continues to be impacted by COVID-19. In particular, this year, nearly all of our team was new to the concept of synthetic biology and had no experience in the lab due to 18 months of COVID-19 lab restrictions. However, we were determined to conduct a wet lab project in an important area of synthetic biology that addresses a global problem, even though we were still operating under restricted conditions. Given the inexperience of our team, we decided it would be essential to start our iGEM season with an intensive review of the fundamentals of synthetic biology. Beginning with the basics, we systematically started with the key tenets of synthetic biology: modularity, standardization, measurement, and orthogonality. While modularity, standardization, and measurement are intensively discussed in the current literature and widely applied in the field of synthetic biology, we were surprised that this was not the case for orthogonality. 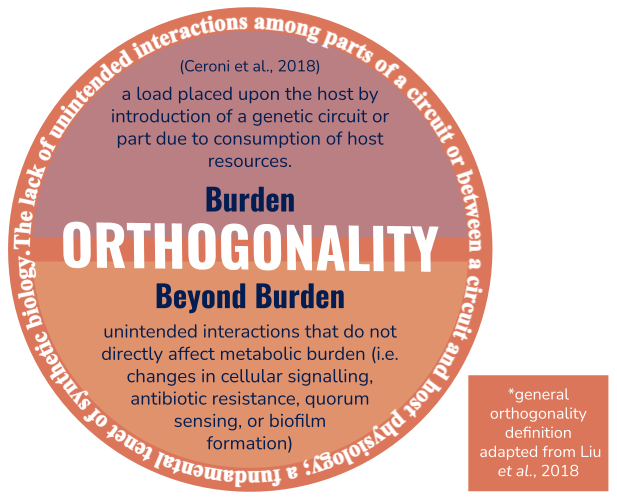 
Our team wanted to find a way to start filling this gap in orthogonality assessment with an easily accessible method for iGEM teams to assess orthogonality in E. coli. To fill this need, we created our 2021 iGEM project: Orthogonality.

These unintended interactions are extremely important as they can cause circuits to lose efficiency, harm their host, release toxins into their environment, break completely, and more, which prevents the reliability necessary for field implementation. In Genetic circuit characterization by inferring RNA polymerase movement and ribosome usage, Christopher A. Voigt and his team discovered the magnitude of these interactions, writing “We were shocked at the number of internal failures. Many parts do not function as designed, bring unintended regulatory sequences in their DNA (e.g., cryptic promoters) or introduce new functions due to the new sequences formed when two parts are connected. ” (Borujeni et al., 2020). The circuits they tested and confirmed to be functional operated in completely different ways than they expected. Evidently, even theoretically sound or functionally confirmed circuits can be unpredictable. In the diverse and crowded environment of a cell, synthetic biologists do not know the full range of their circuits’ interactions, which can lead to unwanted effects or complete breakage.

Overall, orthogonality is directly related to:

Therefore, the entire synthetic biology community would greatly benefit from:

As orthogonality is so important to circuit function, we wanted to start the discussion surrounding a lack of orthogonality assessment. To do this, our team developed our project to provide a method with which circuit-host orthogonality can be assessed in E. coli.

What is our Orthogonality Toolkit?


To extend beyond a burden model, our model incorporates RNA-seq data. After completing a literature review of RNA-seq data sets comparing host genome expression with and without an additional circuit, we found that specific genes were commonly differentially expressed in the presence of a circuit. Our team incorporated these genes into our model as “marker” genes, with changes in expression illustrating changes in circuit-host orthogonality. Teams will then be able to input their own data, from any level, into the model. This data will allow the model to quantify changes in circuit-host marker gene expression by comparing the baseline host expression to host expression with a circuit, enabling our model to provide an orthogonality assessment.


Our mathematical model has three data input levels: RNA-seq, qRT-PCR, and our designed sensor circuits. Each level has differing associated costs and accuracy levels. Based on each team’s resources, they can conduct experiments and input their data into the associated model level. Using their data, our model will output an assessment of their circuit’s orthogonality to the host. 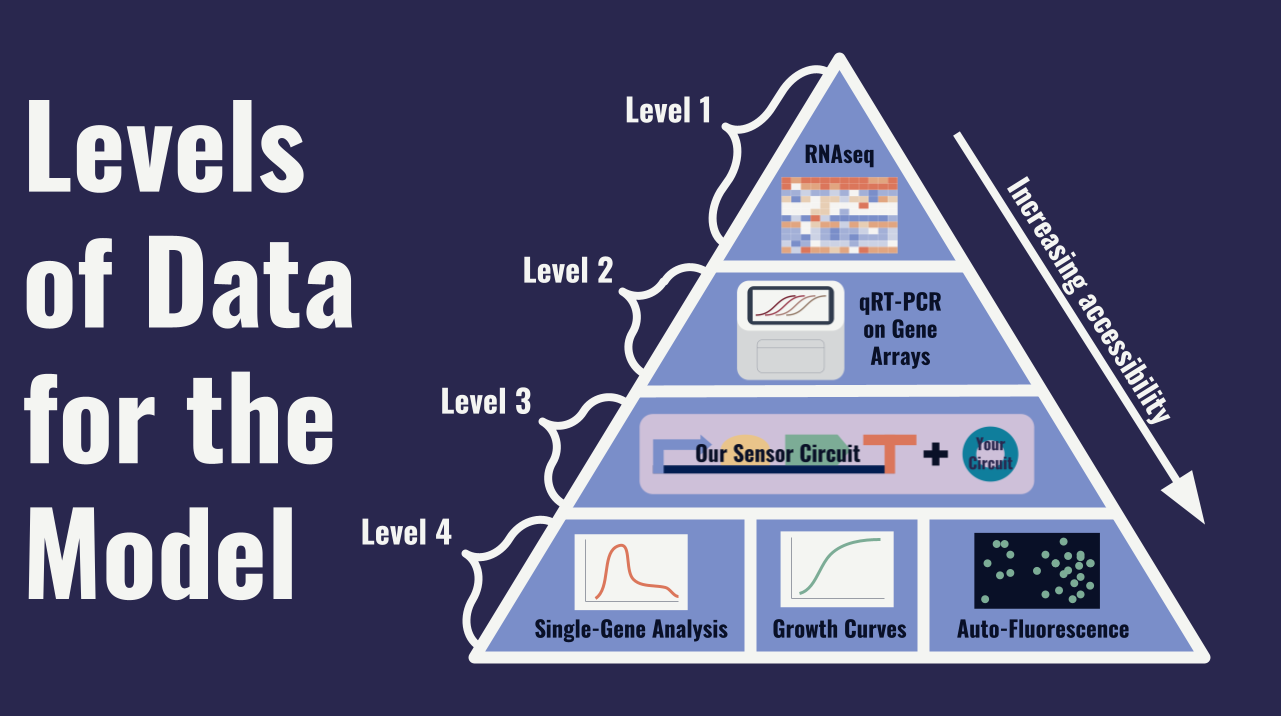 Input Levels for Our Model

The bottom level of our model receives inputs from a collection of genetic circuits that our team designed. These circuits each provide fluorescence output. To use our system, teams will transform an additional plasmid that they want to test into the host with our circuit. The addition of this plasmid will increase circuit-host interactions and will lead to a change in our sensor circuit’s fluorescence output. This change in fluorescence will then be used as an input into our model to derive a specific circuit-host orthogonality assessment.


The creation of sensors to specific host functions will provide teams with insight into which host functions the circuit is directly interfering with, offering a clearer picture of how to fix these issues. Three of our sensor circuits measure the transcriptional, translation, and post-translational burden placed on the host cell by a circuit, providing specific information on how the circuit affects the functioning of its host cell processes. With the goal of expanding our range in the assessment of circuit-host orthogonality, our team conducted a literature search for RNA-seq data comparing gene expression of host cells with and without an introduced plasmid containing a circuit. We found that there were a few genes that were commonly differentially expressed, providing a “marker” for circuit-host interactions. Hence, our additional circuits, the “beyond burden” sensors, were designed using our analysis of the RNA-seq data. The overall sensor design consists of circuits that produce fluorescence in response to changes in the levels of these marker genes, allowing our team to assess differences in the expression of these genes, and therefore, changes in orthogonality levels within the cell over time.


In addition to our sensor circuit input, our model is able to accept other forms of input data, such as RNA-seq and qRT-PCR. RNA-seq is the “gold standard” of orthogonality assessment in the field; however, it is also the most expensive method. As a result, we wanted to provide teams with the option of using RNA-seq data, but also wanted to ensure that this method was not the only input for our circuit, prompting us to create our sensor circuits. Through an input of RNA-seq data comparing gene expression with and without a host, our model will be able to provide teams with an orthogonality assessment. While not as detailed as RNA-seq, qRT-PCR can also provide useful measurements of the changes in cellular functions before and after the introduction of a circuit into a host cell. Measurements from qRT-PCR can be used as inputs for the model. However, this method is still expensive and not accessible to most teams.

This collection of circuits, detailed in our Design page, measures the effect of a circuit on a host cell’s: